One of Obama’s State of the Union addresses was controversial. | Saul Loeb/AFP/Getty Images

Throughout the years, these presidential speeches have recorded and shaped the course of U.S. history. Here are some of the most memorable moments from State of the Union addresses.

Barack Obama’s State of the Union address in 2010 shamed the Supreme Court for its ruling on Citizens United, saying, “Last week, the Supreme Court reversed a century of law to open the floodgates for special interests — including foreign corporations — to spend without limit in our elections. Well I don’t think American elections should be bankrolled by America’s most powerful interests, or worse, by foreign entities. They should be decided by the American people, and that’s why I’m urging Democrats and Republicans to pass a bill that helps to right this wrong.”

More memorable than Obama’s words was Justice Samuel A. Alito Jr.’s reaction. He mouthed the words, “Not true, not true,” and shook his head. Later, Sen. Orrin Hatch, R-Utah, called Obama’s comments “rude,” according to the website The Week.

George “Dubya” Bush delivered a State of the Union address in 2002, shortly after the 9/11 terrorist attacks, coining the phrase “axis of evil,” according to The Week. He said, “States like these, and their terrorist allies, constitute an axis of evil, arming to threaten the peace of the world. By seeking weapons of mass destruction, these regimes pose a grave and growing danger. They could provide these arms to terrorists, giving them the means to match their hatred. They could attack our allies or attempt to blackmail the United States. In any of these cases, the price of indifference would be catastrophic.”

Bush’s words frightened many Americans. Will Ferrell, however, found the term “axis of evil” so memorable — and apparently funny — that he parodied it on Saturday Night Live.

Next: You won’t believe a Democrat said this.

He earned popularity points with his 1996 address. | Pool/AFP/Getty Images

Bill Clinton’s State of the Union address made waves in 1996 when he said, “The era of big government is over.” Those were shocking words coming from a Democrat, but Clinton’s declaration was well-timed.

After he made the speech, his approval rating went up 6 points, according to The Week. In addition, Clinton blasted the Republicans regarding their 21-day government shutdown and demanded that Congress “never, ever, shut the federal government down again.” During his speech, Clinton was interrupted 79 times — by applause.

Next: A tribute to the Challenger 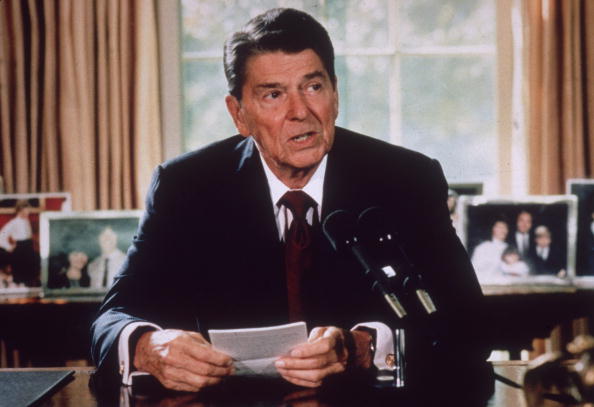 Ronald Reagan delayed an address out of respect for a tragedy. | Hulton Archive/Getty Images

When Ronald Reagan made his State of the Union speech in 1986, he was late. The Challenger space shuttle blew up on the day he was supposed to speak — Jan. 28, 1986 — so he delayed the address. Reagan said, “Thank you for allowing me to delay my address until this evening. We paused together to mourn and honor the valor of our seven Challenger heroes. And I hope that we are now ready to do what they would want us to do: Go forward, America, and reach for the stars. We will never forget those brave seven, but we shall go forward.”

Reagan was traumatized by the death of the seven people aboard the shuttle. During his 1984 campaign, he promoted sending a teacher into space, according to The Week, which led to educator Christa McAuliffe getting on the shuttle and losing her life when the Challenger broke apart.

Next: A seriously blunt speech

He was rather blunt in his first State of the Union address. | STR/AFP/Getty Images

Gerald Ford’s first State of the Union address in 1975 occurred after Richard Nixon resigned. Ford talked about the desperate state of the country from the get-go when he said, “The state of the union is not good. Millions of Americans are out of work. Recession and inflation are eroding the money of millions more. Prices are too high, and sales are too slow.”

According to The Week, his second address wasn’t much more optimistic. Ford said, “… the state of our union is better — in many ways a lot better — but still not good enough.”

Next: This president had no idea what was in store for him.

It’s hard to forget Richard Nixon’s 1974 State of the Union address. Perhaps Nixon’s most famous line was, “One year of Watergate is enough.” Just two weeks after his speech, the House granted the Judiciary Committee power to look into impeachment charges, according to The Week.

In addition, Nixon made a telling mistake during his speech when he said, “We must replace the discredited president,” instead of, “We must replace the discredited welfare system.” At the end of the address, Nixon proclaimed, “I have no intention whatever of ever walking away from the job that the people elected me to do for the people of the United States.” Eight months later he resigned.

Next: The war on poverty

Lyndon Johnson made his 1964 State of the Union address weeks after he was sworn into office, on the heels of John F. Kennedy’s assassination, according to The Week. Today, Johnson’s address is known as the “War on Poverty” speech.

“Our aim is not only to relieve the symptom of poverty, but to cure it and, above all, to prevent it,” Johnson said. “No single piece of legislation, however, is going to suffice.”

He gave a speech centered on freedom. | Central Press/Getty Images

When Franklin D. Roosevelt made his 1941 State of the Union speech, America was nervous about the war that was erupting in Europe. Although the U.S. didn’t engage in it until almost a year later, Roosevelt said, “We look forward to a world founded upon four essential human freedoms,” according to The Week.

Next: The preservation of democracy

Abraham Lincoln is still one of the most well-respected presidents. | U.S. Library of Congress via Getty Images

In 1862, Abraham Lincoln addressed Congress 10 weeks after he issued the Emancipation Proclamation, according to The Week. In those days, the president wrote out his State of the Union address instead of voicing it, and scandal broke out when the New York Herald published several excerpts early. Lincoln spoke of emancipation of slaves — and the ultimate preservation of democracy, according to The New York Times.

Read more: This Is the Most Loved President of All Time