Keep reading to see which U.S. presidents have smoked cigarettes — including Barack Obama on page 3 and Donald Trump on page 5 — then try and picture them with one in hanging out of their mouths. It’s not as easy as you might think.

He smoked up to two packs a day. | Topical Press Agency/Getty Images

You might have seen the iconic picture of Franklin Roosevelt smiling big and clutching a cigarette holder — complete with glowing butt — between his teeth. Roosevelt was definitely a dedicated smoker — in fact, he smoked up to two packs a day, according to the website deadpresidents. When Harry Truman, a nonsmoker, moved into the White House he likely had to have some serious cleaning done to get the smell of smoke out of it.

Next: Four packs a day?

According to deadpresidents, Dwight Eisenhower was another president who smoked. And he smoked a lot — to the tune of four packs a day. And, he smoked unfiltered cigarettes. But wait, there’s more … he rolled his own cigarettes. Fortunately, a doctor told Ike he needed to quit, so he did before he became president. He quit cold turkey and never took up the bad habit again.

Next: This president’s no quitter.

He had trouble kicking the habit. | Pablo Gasparini/AFP/Getty Images

According to The Hill, Barack Obama said he had kicked his cigarette habit when he moved into the White House. But did he really? Perhaps not. Rumor has it that he’s been photographed holding a cigarette — and in one case, a pack — more than once.

In addition, one source talked about the time Billy Joel visited the White House and Obama invited him out for a smoke. According to the source, Obama said, “I’m going out on the North Portico to have a smoke. Do you want to come with me?” In 2009, Obama said he “constantly” struggles with smoking.

Next: No big surprise here. 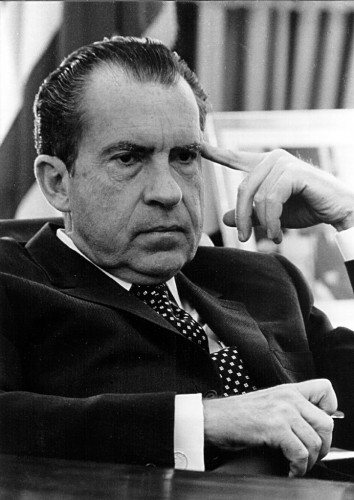 He quit before he was elected but still smoked cigars. | National Archive/Newsmakers/Getty Images

Richard Nixon had some odd habits, which Tim Weiner exposed in his book One Man Against The World: The Tragedy of Richard Nixon. Nixon drank a lot. So much, in fact, that by 1968, his close adviser John Ehrlichman wanted to quite because of it.

So, the fact that Richard Nixon smoked prior to taking office comes as no surprise. Although, according to the San Diego Reader, he had quit before he was elected, he never gave up cigars. History in Nashville contends that Nixon remained a champion cigar smoker.

Next: This is why Donald Trump doesn’t smoke.

Donald Trump doesn’t drink or smoke, according to Politico, and there’s a specific reason why. In 1981, his beloved older brother, Fred, died from alcoholism when he was 43.

Next: This president’s wife smoked, too.

It’s pretty much common knowledge that John F. Kennedy was an ex-smoker by the time he took office. But like Nixon, he simply switched to cigars once he became president.

What you might not know is that JFK’s wife, first lady Jackie Kennedy, smoked like a train. There might not be photos of her doing it because White House photographers weren’t permitted to take any. Nonetheless, Jackie went through about three packs of Salems every day, according to CigarettesReporter.com.

Next: This president never quit.

Lyndon B. Johnson stank up the Oval Office every day with cigarette smoke, according to the San Diego Reader. It’s no wonder he had advanced coronary disease — he had gone through years of eating a poor diet, smoking heavily, and working under sever stress. He never quite smoking after he left the White House in 1969. Johnson had his first heart attack in July 1955 and lived through a second one in April 1972. Then, he died in January 1973.