Breeding dogs can either be a lucrative business endeavor or a really expensive hobby. Many will sell dogs to pet stores and other retailers for profit — but only if they breed enough puppies to make it worth their while. As a result, some breeders produce a high-volume of dogs using less-than-ethical methods.

When it comes time to buy a dog, it’s easy to be swayed by puppy eyes and wagging tails. But this report shows that consumers must conduct thorough research before contacting a breeder. The details will hurt your heart, so we’ll spare you the goriest and offer a few solutions (page 16). But, beware, these states are home to some of the worst puppy mills in the country. 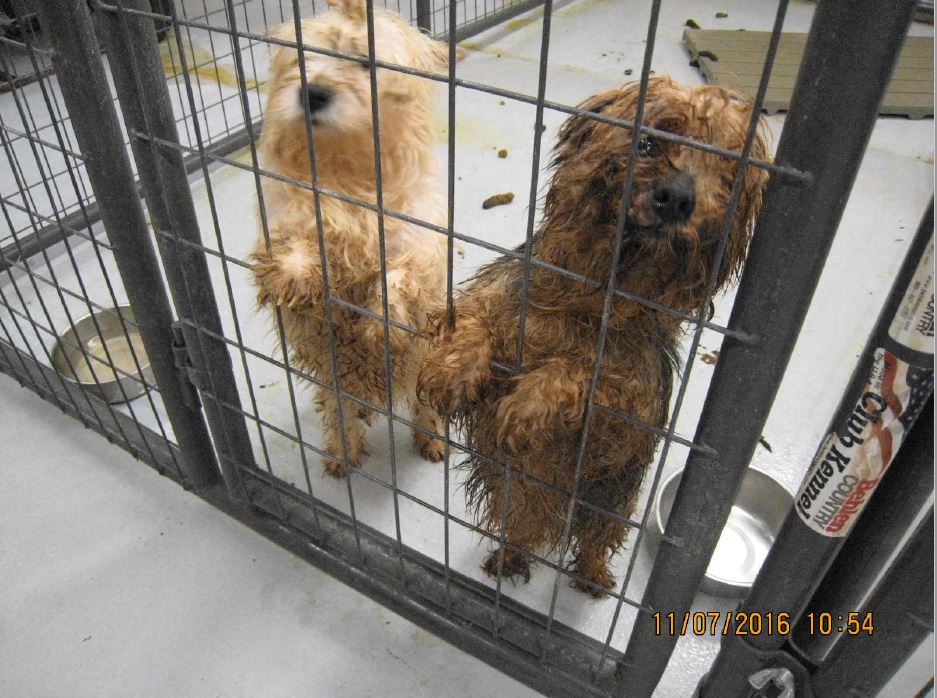 A kennel in Michigan was marked for failure to maintain a black Labrador breeding facility “at even our minimum standards in the areas of basic animal needs.” Inspectors found dogs with a lack of shelter in need of veterinary care and more sufficient protection from weather, especially since temperatures in Michigan sink into the teens during the cold months.

It’s also worth noting that there is likely more than one improper breeder in Michigan, but a lack of USDA reporting detail in 2018 data prohibits The Humane Society from naming them.

Next: A dog breed suffers in this state 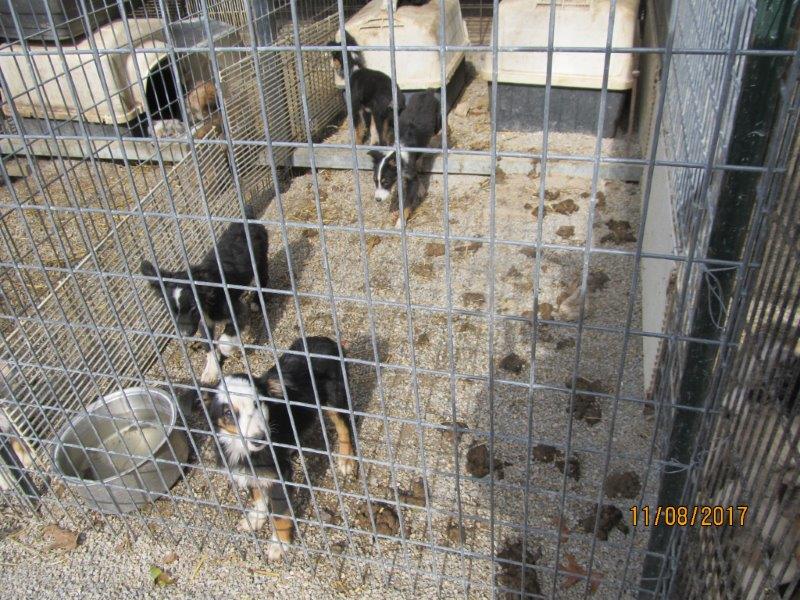 Conditions at puppy mills are poor. | MO Dept of Ag

Data uncovered overly thin, diarrhea-ridden puppies without the proper veterinary care in a Humboldt, Illinois, breeding facility. The kennel housed Boxer puppies in buildings the USDA inspector cited as having “moderate buildup of brown dirt/grime on the walls, and inside the feeder troughs.”

Next: Hundreds of dogs at risk 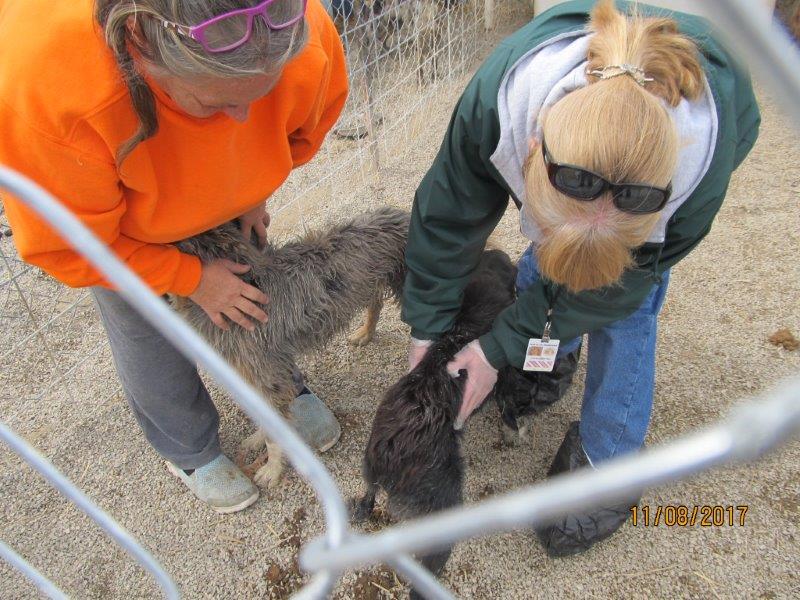 The Yorkie and toy breed puppy mills under inspection in Georgia both appear to be without an active USDA license to breed and sell dogs. The kennels, one in Nashville and the other in Meigs, were flagged for structural issues, overwhelming ammonia smells, and heat temperatures of 95 degrees in the dog pens, despite prior warnings from law enforcement.

Next: A breeder with a history of violations 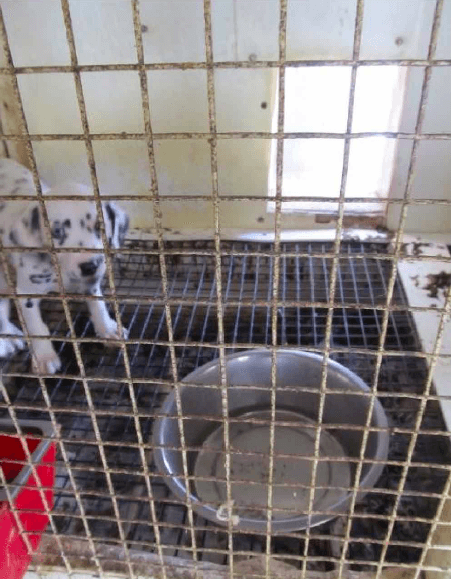 One of the two illegal breeders in Oklahoma previously operated facilities in Ohio and Georgia under a fake name before officials revoked their license. Both mills were overrun with disease and one was placed under quarantine after testing positive for a rare bacterial disease, brucellosis.

The report has more detailed information on this facility and its history, but potential owners should be cautious about buying from a puppy mill in this state.

Next: A sad sight in the Midwest 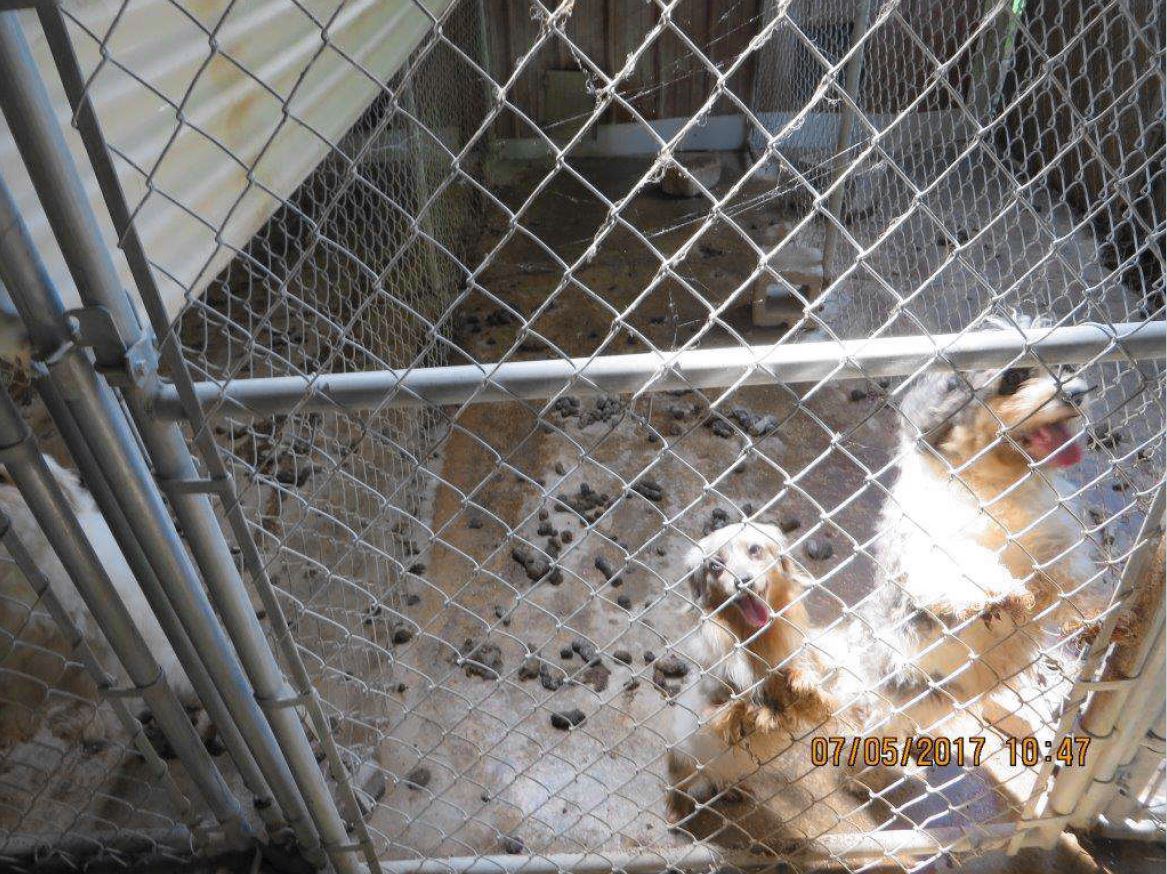 Conditions at some puppy mills are simply unacceptable. | NE Dept of Ag

Saint Bernards, Labradors, and Weimaraners were all victims of inadequate puppy mills discovered in South Dakota. Dogs in these facilities ate their food from the floor and were suffering from ulcerated skin lesions, which were likely worsened by a lack of vet care. One breeder in Plankinton, South Dakota, admitted a vet hadn’t visited the facility in three years. 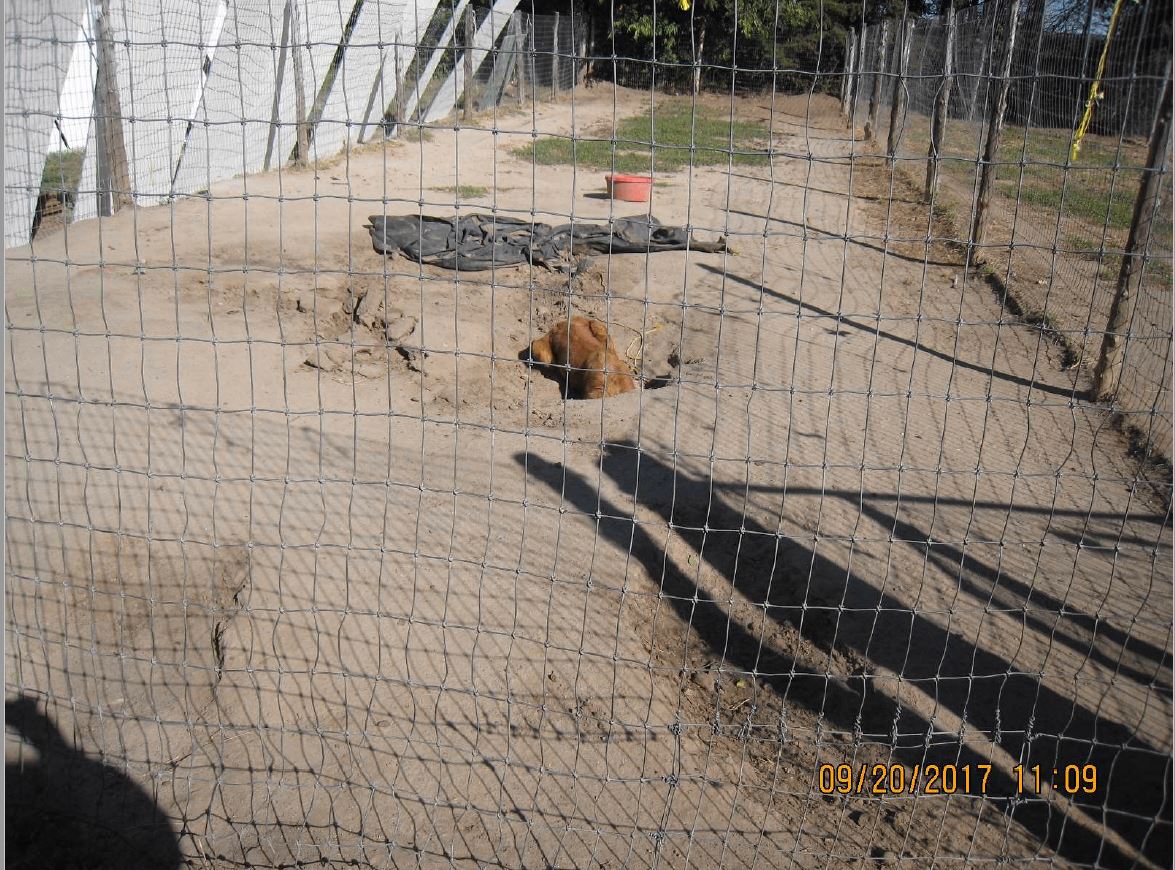 A wounded dog hides in a hole at a kennel. | NE Dept of Ag

The Humane Society’s Horrible Hundred report highlights three sub-par puppy mills in Arkansas with USDA citations in the cities of Mountainburg, New Hope, and Paris. USDA redactions of vital information in reporting mean researchers couldn’t link name, business name, or license numbers to these kennels. However, most breeders were repeat offenders on previous reports, so The Humane Society has a pretty good idea who the culprits are.

Next: Buyers beware in this state 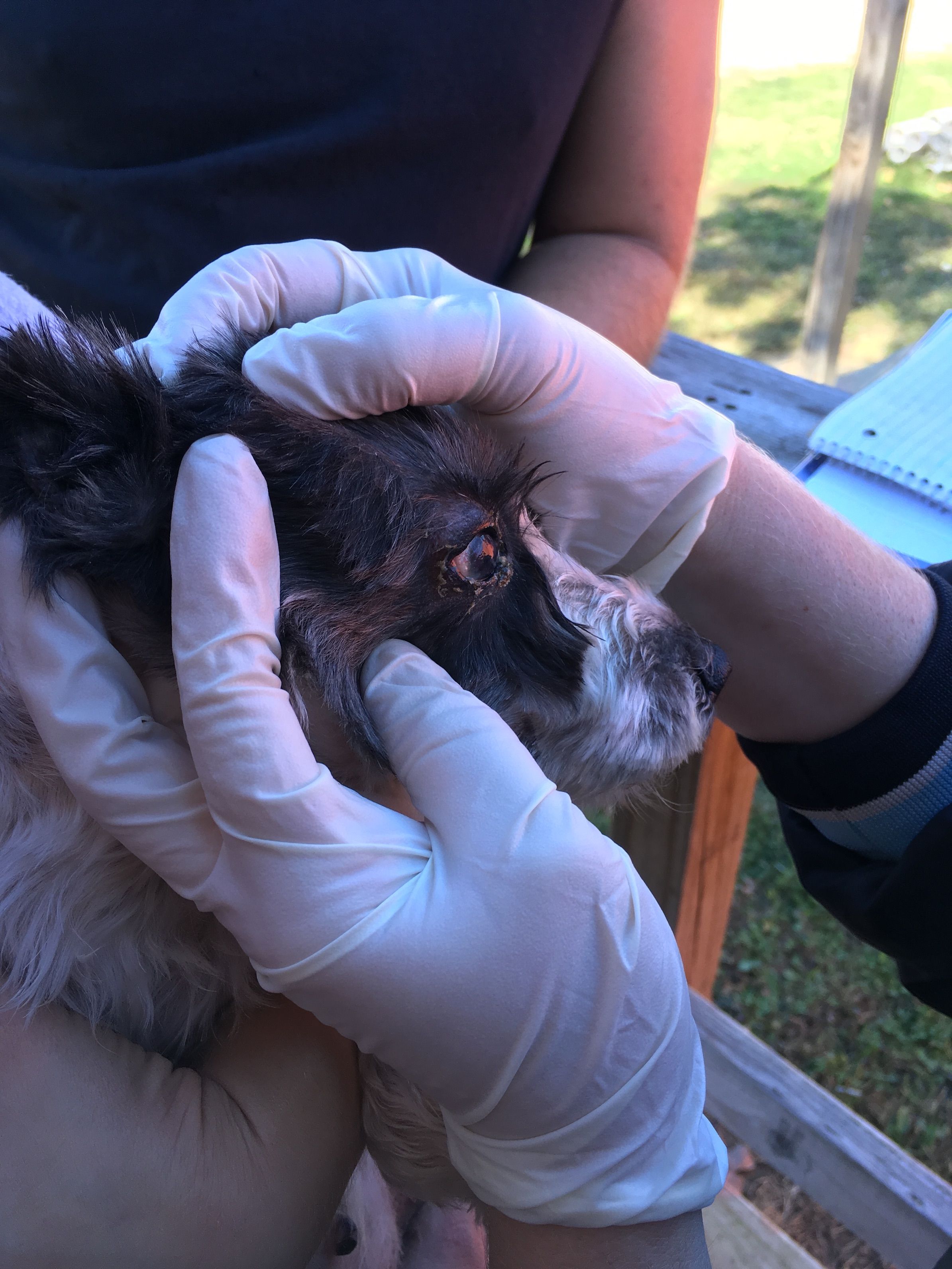 Unfortunately, an American Eskimo puppy was found dead in a water bowl in a Greens Fork, Indiana breeding operation. Inspectors found multiple violations of the Animal Welfare Act — mostly relating to housing puppies and unrelated adult dogs together that could lead to fighting — across the state.

Next: Do you live near any of these breeders? 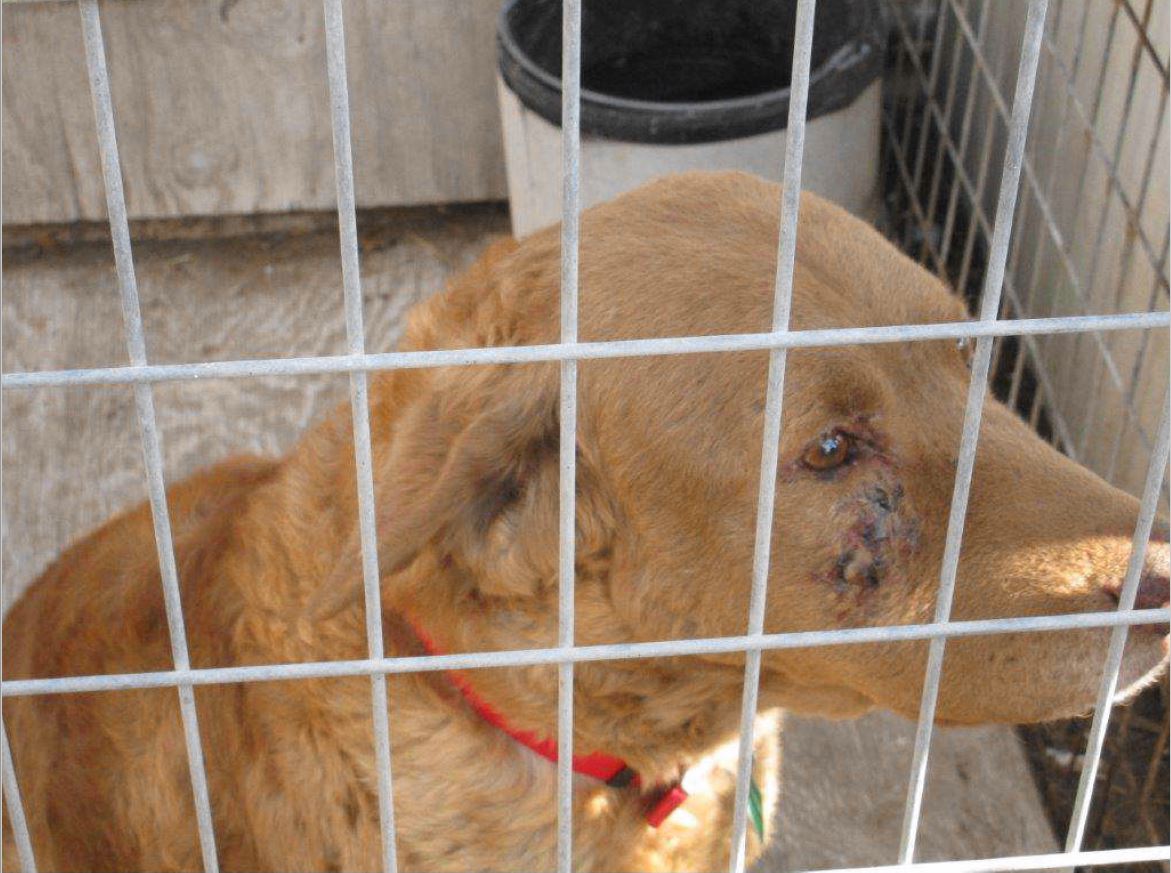 Nebraska is another state home to unsatisfactory dog breeding facilities. The Humane Society uncovered six puppy mills with repeat citations for underweight animals, dogs with missing limbs, and injured Golden Retrievers who were not receiving proper medical care. These breeders were located in Orchard, Fort Calhoun, and Swanton, Nebraska, among others.

Next: A dire situation up North 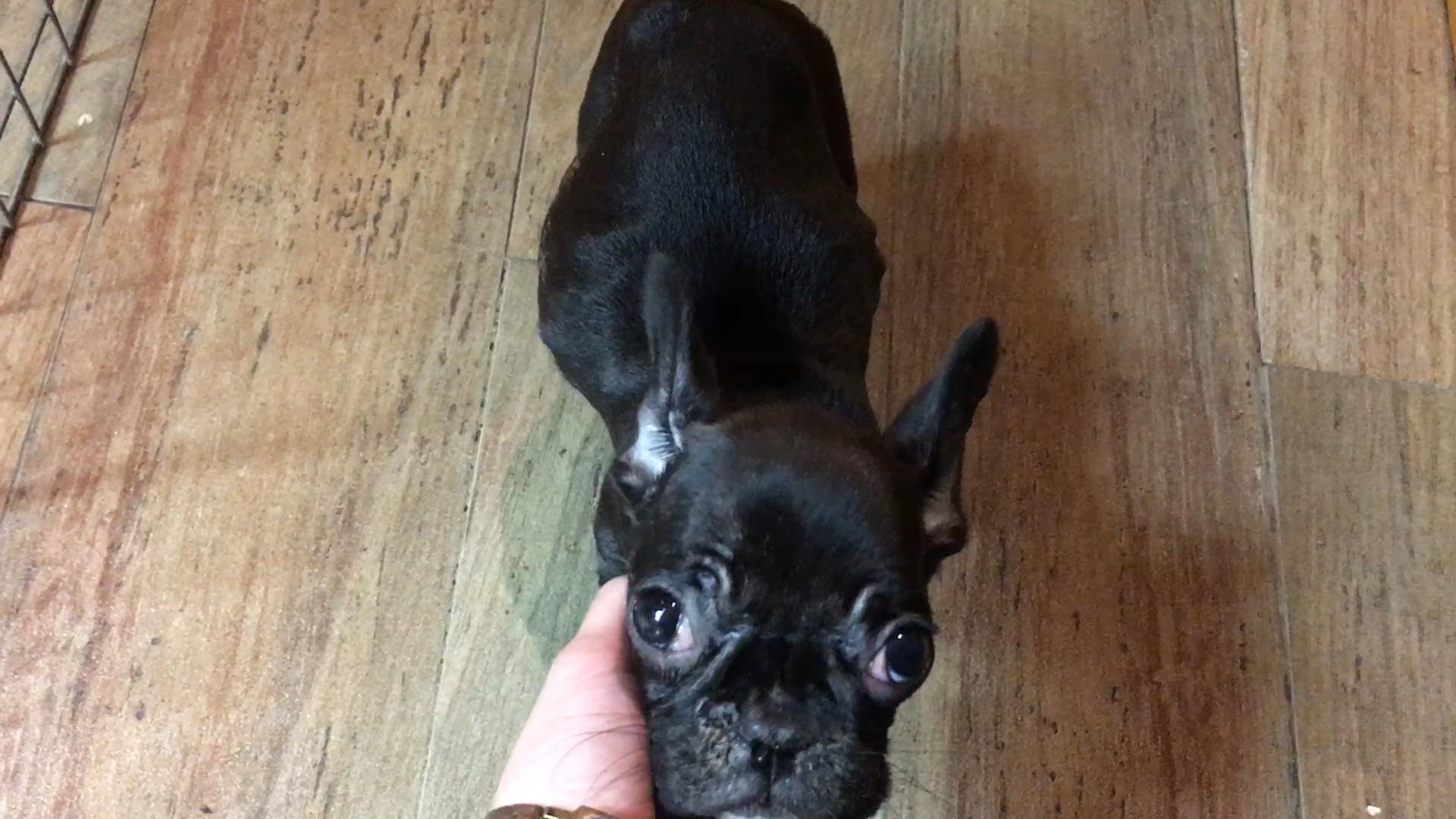 Many of the puppy mills in New York were new additions to the 2018 Horrible Hundred Report, as only one breeder located in Dundee, New York, appeared on the 2017 list. USDA inspectors found dogs with matted fur exposed to dangerous wire floors. As is the case with most poor puppy mills in this report, many of these dogs also had irritated and swollen bodies with untreated infections.

Next: An alarming number of puppy mills 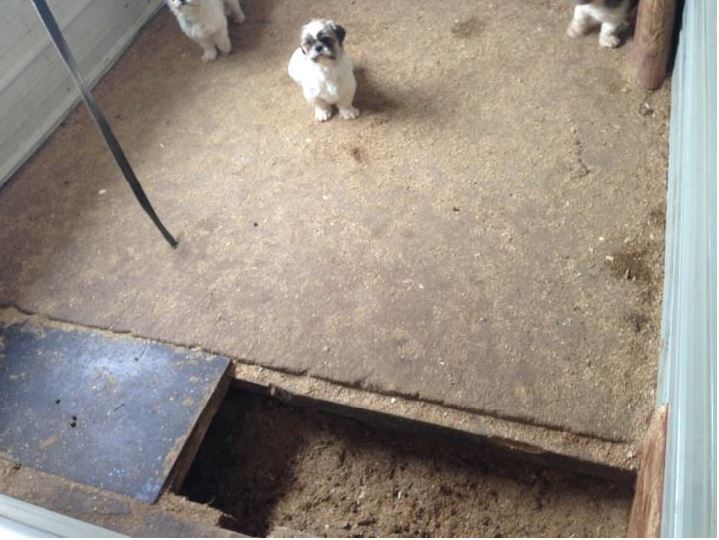 There are eight bad breeders in Wisconsin with multiple violations. Dogs were found limping and shivering in the cold according to one inspector. Other citations include a failure to treat puncture wounds and provide adequate care. Needless to say, people looking to buy a dog in this state should conduct thorough research on the breeder before making a decision. 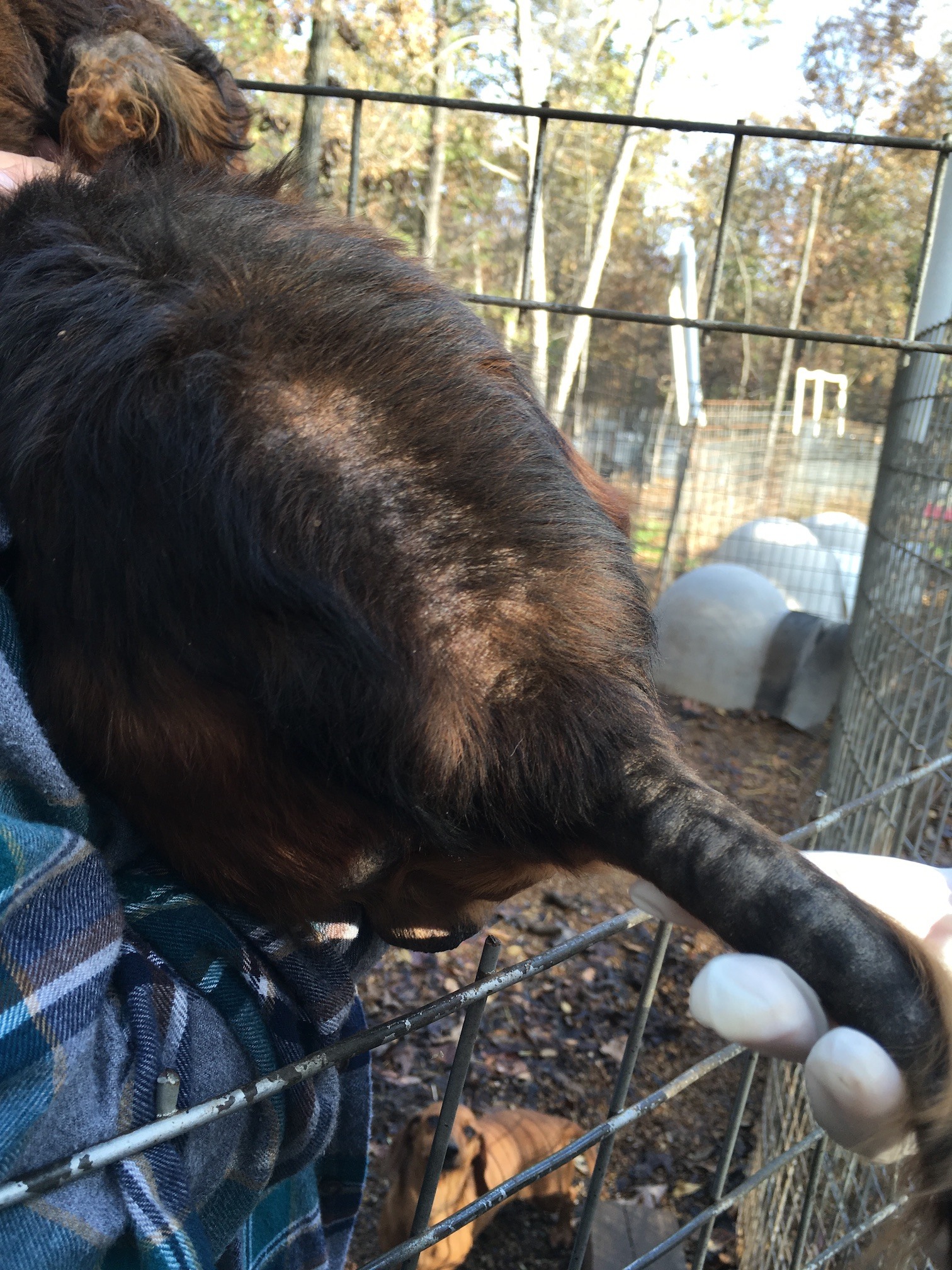 A sick dog at a kennel | MO Dept of Ag

The USDA revoked the breeder license attached to a kennel in Baileyville, Kansas, after years of repeat violations for selling puppies online sight-unseen without a federal license. The other seven unlawful puppy mills in Kansas were cited for obscenities such as dogs living in standing water and other filthy conditions, animals with open and untreated wounds, and malnourished puppies with hip and tail bones showing.

Next: This county is infamous for puppy mills 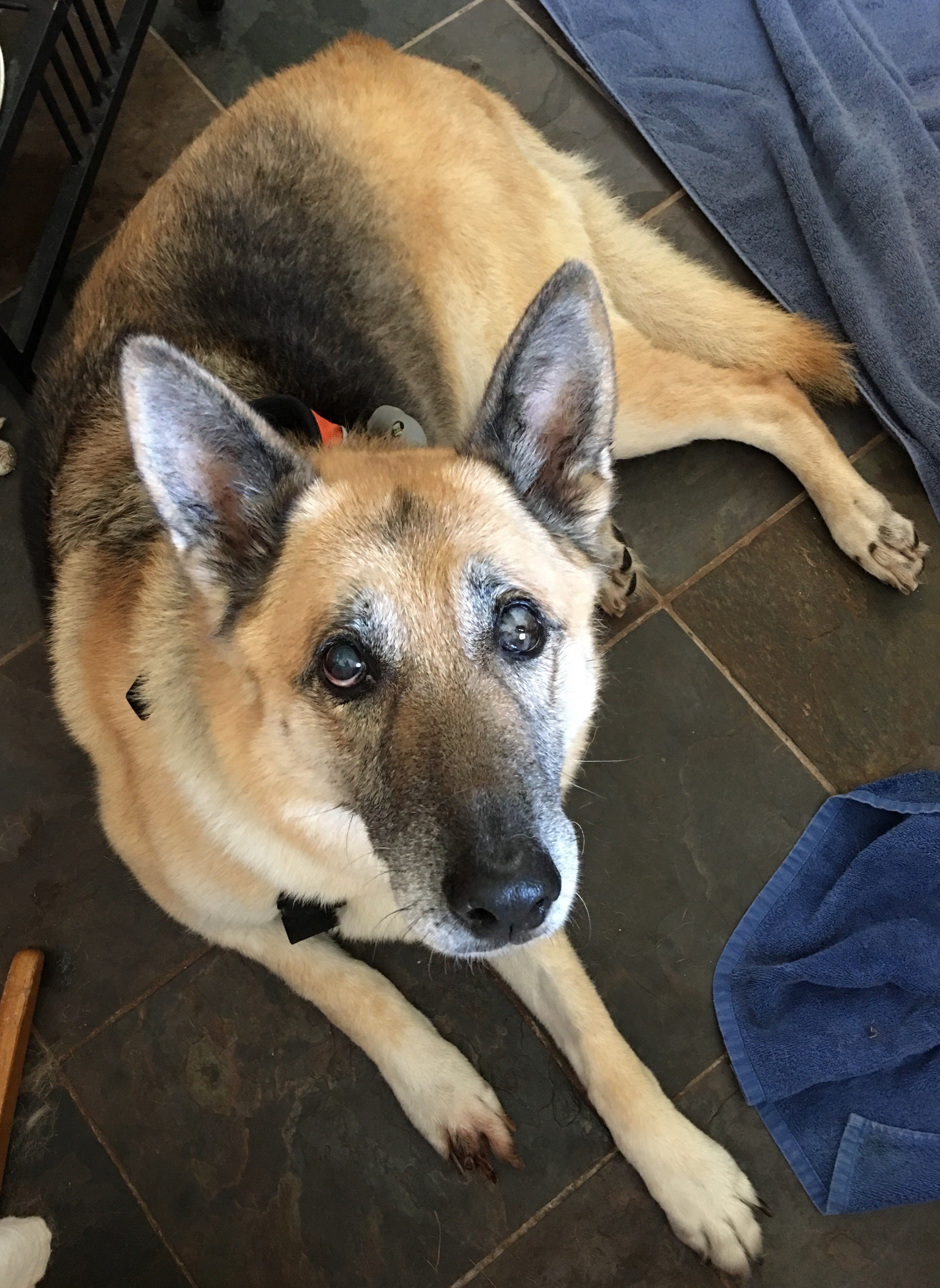 Lancaster County, Pennsylvania has been on lawmaker’s radar for being overrun with puppy mills for years. Dog auctions are particularly popular in this region. Last year’s breeder report listed seven mills in Lancaster County alone. This year, Golden Retriever puppies were found living in unsanitary conditions with a lack of ventilation and were being sold to families without vaccinations.

Next: The third worst state to buy a dog 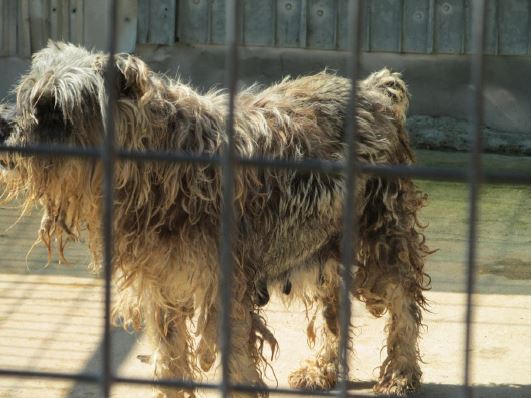 A dog covered in excrement | MO Dept of Ag

The Humane Society was able to expose at least 10 bad puppy mills in Iowa, all of which were cited for inadequate care. Details surrounding the violations are heartbreaking, but among them was the presence of live maggots in dog food, dead dogs, puppies with irritated skin, and open wounds.

What’s worse is that the kennels in Cincinnati, Ackworth, and Knoxville, Iowa, are repeat offenders who have failed to address prior citations awarded by USDA inspectors.

Next: Seriously questionable breeding practices in this state 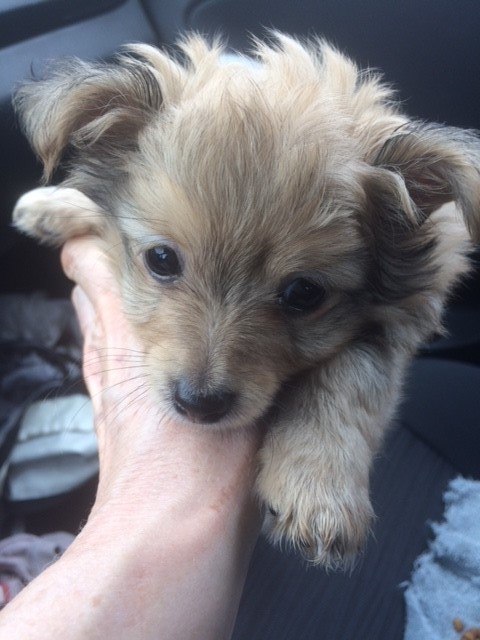 A puppy from an unlicensed Ohio breeder | HSUS

Ohio is the No. 2 worst state to buy a dog when considering the number of puppy mills in the area. Inspectors reported 13 different facilities operating outside lawful guidelines. One puppy mill in Canton, Ohio, admitted to neutering puppies without a veterinarian and selling them to people without a state license.

Next: The worst state to buy a dog for many reasons 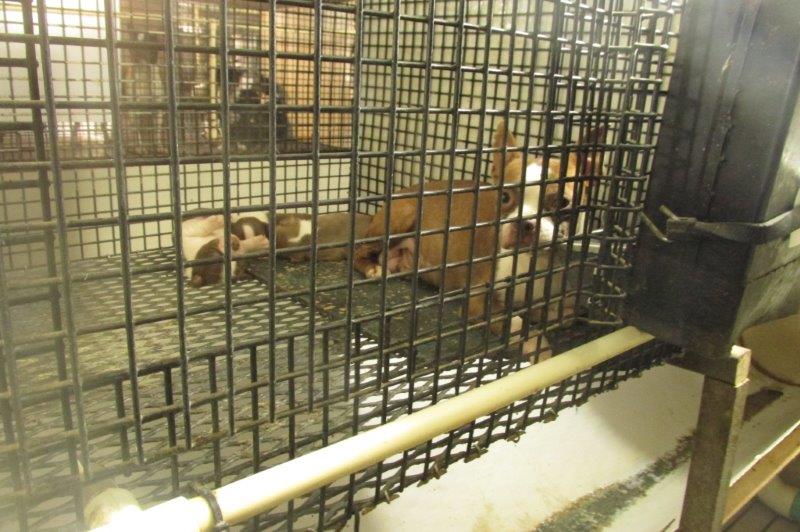 A puppy mill in Missouri | MO Dept of Ag

Missouri continues to have the largest number of puppy mills in the report for the sixth year in a row. State inspectors routinely find injured dogs, puppies with a lack of muscle mass, Basset Hounds with bulging eye wounds, and countless toy breed puppies with hair loss and lice. What’s most alarming is that most of these breeders have found a way to skirt their revoked licenses and sell dogs online illegally.

Next: How you can fight to stop puppy mills. 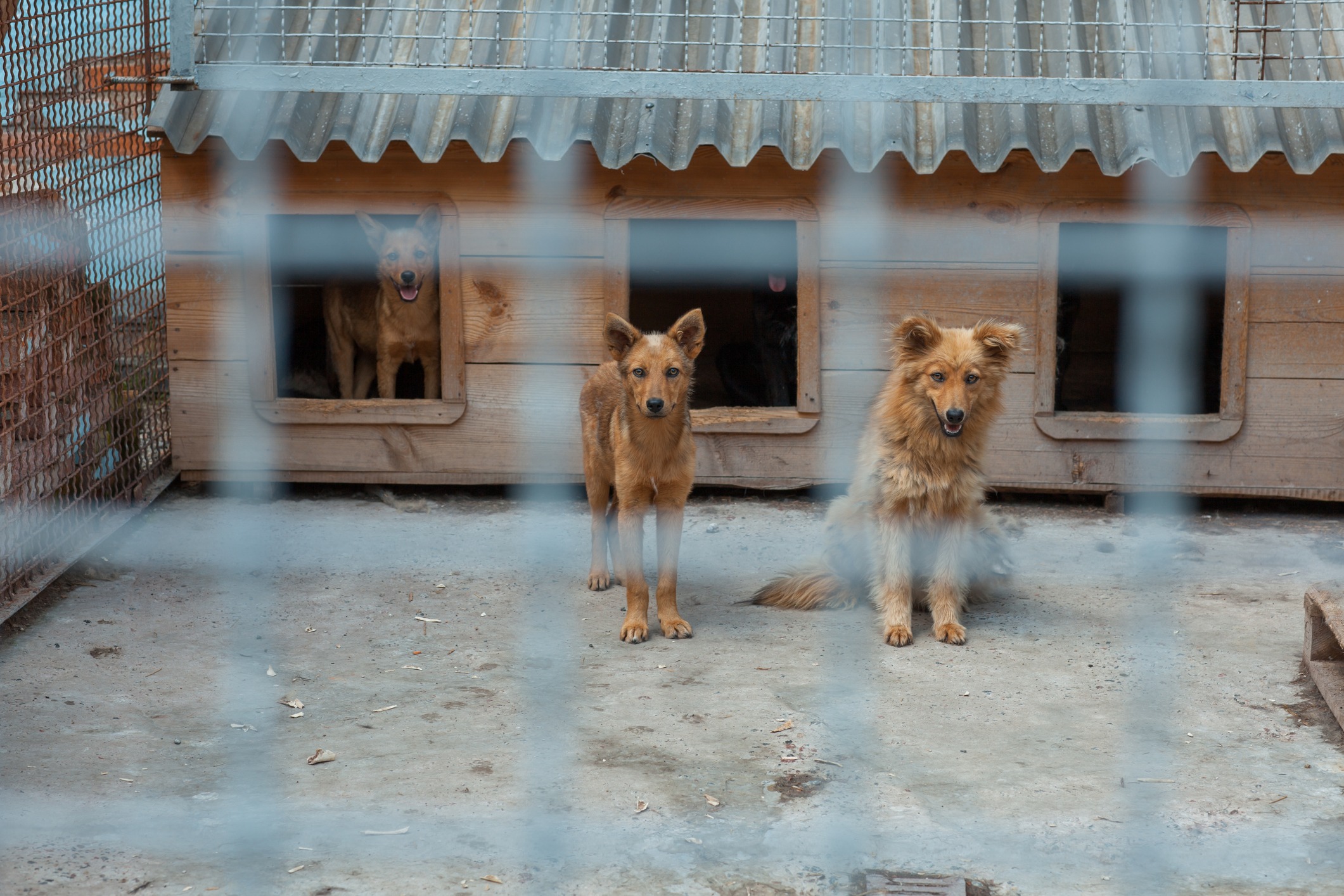 Dogs in a cage | Silk-stocking/iStock/Getty Images

The Humane Society’s Horrible Hundred report offers more detail on these terrible puppy mills, including names, websites, and specific violations. Future dog owners can use this information to avoid giving them any business. Those looking to buy a dog should know the telltale signs of a puppy mill. Among them are out-of-state breeders, kennels who breed more than one type of dog, and adult dogs who have puppy litters more than once a year.

Fortunately, some states like California are also acting to protect dogs in puppy mills and thwart bad breeders. Even Congress is getting involved, demanding answers from the USDA for failing to properly enforce the Animal Welfare Act.

Federal legislatures have the power to stop the inhumane treatment of dogs and can fight to expand the reach of the Animal Welfare Act. If you suspect a puppy mill near you, contact your lawmakers to help stop puppy mills from becoming a growing problem.