Chicago teen Kenneka Jenkins was found dead in a Crowne Plaza Hotel walk-in freezer recently, with no immediate clear cause. Because America loves a mystery, both amateurs and law enforcement have taken up the case. According to the New York Times, the 19-year-old wandered away from a party and ended up in a walk-in cooler in an abandoned area of the hotel. Whether Jenkins died as a result of foul play had not been determined as of press time.

While tragic, the Jenkins case is hardly unique. People end up in freezers every once in awhile, both as a result of foul play and seemingly by accident. We found a host of such cases, both solved and unresolved. The first involves a missing person and an impostor.

This man is storing animal meat in a freezer, but police have discovered more grisly contents. | Topical Press Agency/Getty Images

Youngstown, Ohio police charged Arturo Novoa and Katrina Layton with abuse of a corpse, after finding a missing woman’s body in Novoa’s freezer. Friends of Novoa’s discovered it when he asked them to keep the padlocked freezer because his power went out. After they became suspicious and broke it open, they made the grisly finding.

The AP reported that Layton helped her boyfriend store the body, subsequently moving into her home. Authorities confirmed it belongs to Shannon Graves, who her family has not seen since Christmas. Novoa and Layton lived in Graves’ home together after her disappearance

“Basically, Layton moved in with Novoa and started living her life,” Youngstown Prosecutor Dana Lantz explained, according to People. “She didn’t hold herself out to be Shannon, she just lived her life, using her phone, caring for her dog.”

Officials have not filed murder charges yet, pending an investigation into the cause of death. In the next case, bailiffs serving an eviction notice discovered more than missed rent. 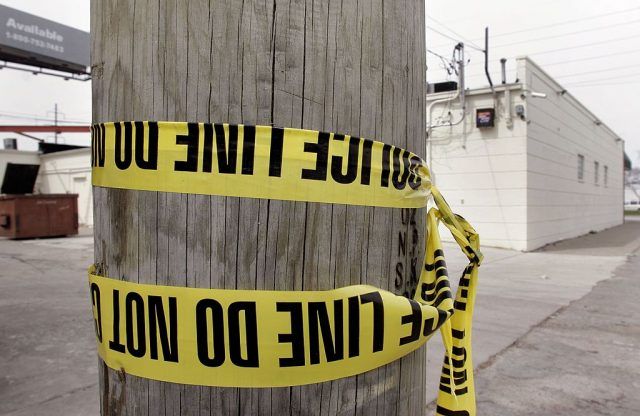 Crews working to evict Mitchelle Blair of Detroit discovered the bodies of two of her children in the freezer in 2015. The Detroit Free Press covered the case, in which Blair extensively abused Stoni Ann Blair, 13, and Stephen Gage Berry, 9. The mother tortured Stephen for weeks before he died. She reportedly tied a belt around his neck, scalded him, and placed a plastic bag over his head. In 2012, when she found him unresponsive, Blair wrapped him in bedsheets and placed his body in the freezer.

Stoni died on May 25, 2013, after Blair strangled her with a T-shirt and suffocated her with a plastic bag. After the killing, Blair made her older daughter help her stash the body.

“They’re both dead. I did it,” Blair said, during her arrest. During her sentencing, a judge told the mother she “failed in the worst possible way.

“You imposed the death penalty on your own children,” Wayne County Circuit Judge Dana Hathaway told the Detroit mother. Blair called her children “demons,” and expressed no remorse for their deaths. Her two remaining children also suffered abuse, and were removed from her household.

“Thankfully that house of horrors that you created is no longer in existence,” Hathaway told her. “I do pray that your remaining children will recover from what they saw and endured in that household.”

Sadly, Blair is not the only mother who killed her child.

Janiya Thomas was murdered by her mother after years of abuse. | John MacDougall/ AFP/Getty Images

Courts sentenced Florida’s Keishanna Thomas, 33, to 65 years in prison after she killed and stored her daughter’s dead body, The Daily Mail reported. The 11-year-old Janiya Thomas’s body languished in the freezer for up to 16 months, after  Manatee County’s Child Protective Investigations came to take away Thomas’ five children and found only four there.

According to the Bradenton Herald, Thomas was arrested on Oct. 16, 2015 after failing to disclose details about her daughter’s whereabouts. They reported the little girl missing and two days later, the Manatee County Sheriff’s Office received a call from a relative saying she found a body in a freezer Thomas had brought to her home. The relative told Manatee County Homicide Unit detectives that Thomas had asked to store a chest freezer in the relative’s garage on Oct. 15. Thomas’ boyfriend Trayvon McCollough had been dating her since the previous August and helped move the freezer, but he reported knowing nothing about Janiya.

In the next case, an argument went horribly wrong.

Usually known more for its beaches than crime, Waikiki was the site of a gruesome murder | Nicholas Kamm/AFP/Getty Images

A young man killed his mother after an argument about his education, according to Hawaii News Now. In April, Yu Wei Gong, 26, called 911 and told a dispatcher, “I killed my mom.” He told police the pair argued because he wanted to drop out of school and get a job. When officers asked where she was, Gong said “she’s in the fridge,” according to court documents.

An officer “checked the freezer … and found it contained numerous plastic bags containing unknown objects. One of the bags revealed a piece of meat that appeared ‘fleshy’ and ‘hairy,'” the documents said. A different officer saw what appeared to be a human leg and foot.

Neighbors said Gong “kept to himself” and was “very quiet.” The remains were discovered in a large freezer Gong kept in the living room. “It was white and big. We saw the freezer,” neighbor Robin Greenlaw told Hawaii News Now. “It was just odd to be standing in the living room.”

In the next instance, a freezer salesman’s joke proved prescient.

Jeremy Ringquist purchased a chest freezer “to help with the stink” three days after he shot and killed his parents, the AP reported. When the Oregon man went to buy the freezer, the salesman joked it was “a two-body freezer.” He told police he often makes the comment about its size. Ringquist initially snapped, “What did you say?” but the two “chuckled about it” before he brought it home in his father’s truck.

Springfield, Ore., police discovered the bodies after Ringquist’s ex-wife called in a welfare check, three weeks after Ringquist killed them. He told detectives he expected them sooner, and that he planned to “get into a shootout” with the cops. When police arrived, they discovered shotguns, handguns, and rifles “loaded and ready to go,” in addition to the bodies duct-taped and partly stuffed with packing material, with each parent’s passport taped to their corpses.

Garbage collectors discovered the next gruesome sight, leading police to the rest of the remains.

After garbage collectors found body parts strewn around New York and New Jersey, police discovered her head, hands, and feet in her boyfriend’s freezer. According to NBC 4 New York, Foster’s torso and leg appeared at the Metropolitan Transfer Station in Hunts Point, NY. Investigators found her arms but no hands in a trash station in Kearny, NJ. Surveillance footage and cell phone records led police to Somorie Moses, 40. Police charged him with evidence tampering, corpse concealment, and murder.

Moses is a registered sex offender and he had threatened his girlfriend and her family in the past. Not many details have emerged in the next case, which does not immediately indicate foul play.

Brandon Chandler of Cincinnati died in a cooler at Molly Malone’s Irish Pub and Restaurant in August, reported WHIOTV. The coroner has not reported a cause of death, but police do not suspect a struggle. A fellow employee found Chandler inside after his shift. He said the cooler remained unlocked and his exit unobstructed.

“At this time we don’t suspect really anything, but we can’t provide any additional information until we determine the cause,” Cincinnati police Sgt. William Bell said.

Urban legends often surface about bodies found refrigerated, often as cautionary tales. These true crime stories show the Jenkins case, while it may or may not involve foul play, now belongs to a tragic lineup.