On December 7, 1941, Americans very dramatically entered one of the most infamous conflicts of all time – World War II. When the Japanese bombed Pearl Harbor on that fateful day, it left our nation with no choice but to join with the Allied forces to face off against evil.

Life here in the United States and Europe became completely different during World War II. Previously unseen and often dire circumstances became commonplace. Men, women, and children of all ages saw the world change before their very eyes. Nothing and no one would ever be the same.

Whether you lived through World War II or your relatives still tell stories about what it was like, these telling photos show just how life was different during this pivotal time in history.

Rations became a way of life 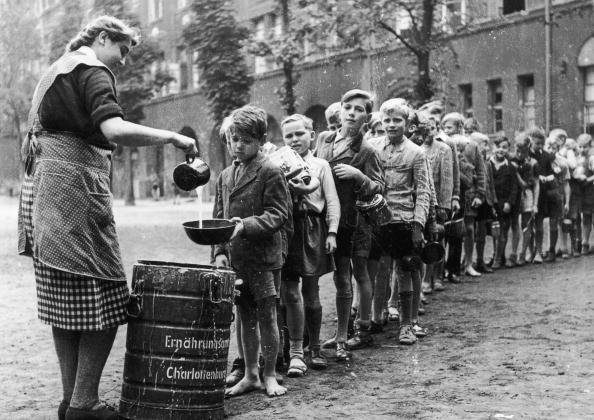 People understood that sacrifices needed to be made during wartime, which is why rationing programs were introduced all over the world. In America, the spring of 1942 brought about rationing on food, gas, and clothing to assist with the war effort. In the above photo, British schoolchildren receive their rations of gruel (flour and milk).

Next: Thousands of children were evacuated.

Hundreds of thousands of children were evacuated 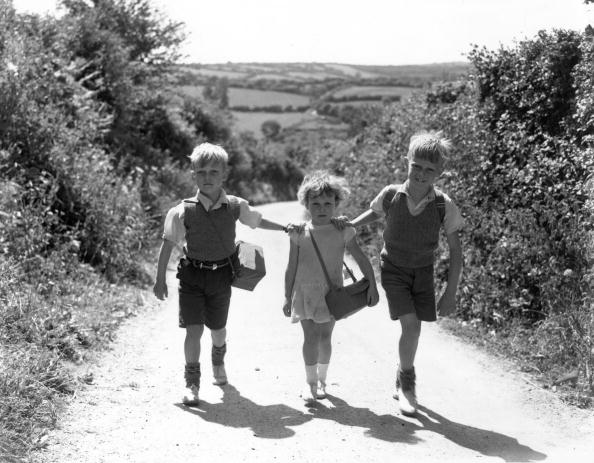 When the war began, British cities evacuated children to the countryside to keep them safe. A total of 827,000 schoolchildren and 103,000 teachers and helpers were sent away from cities in anticipation of the bombings. The bombing raids wouldn’t begin until 1940, when most of those children had already returned home.

Next: Hitler wasn’t the only Nazi.

There was more than one nazi 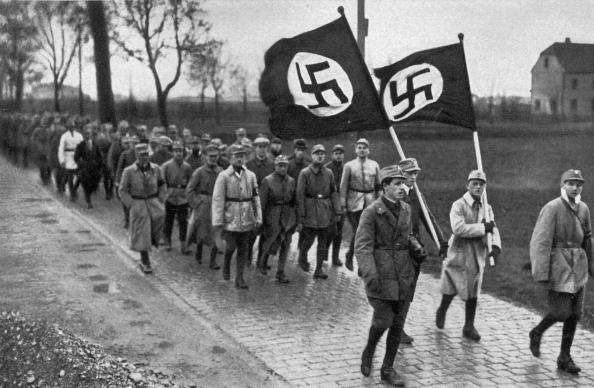 Nazis may have found a leader in Adolf Hitler, but he was hardly the only one who had those ideas. The German Workers’ Party was founded in 1919 and largely believed that Germany was given a bad deal in the peace Treaty of Versailles following World War I. The group promoted German pride and upheld anti-Semitic beliefs.

Next: People didn’t trust the newspapers. 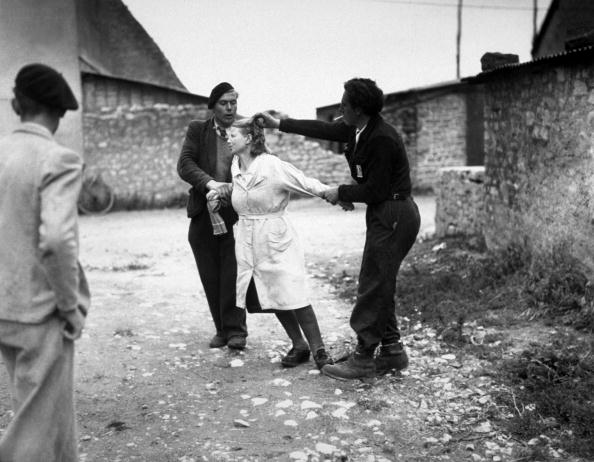 Many people became cynical or even hostile during the war, believing that the news media wasn’t reporting accurate information. A general feeling that the most important bad news was being withheld caused distrust amongst the people, while rumors of invasions, conspiracies, and spies kept everyone watchful – and fearful. Above, a woman accused of collaborating with the Germans is punished by having her hair cut off.

Next: Gas masks were everywhere. 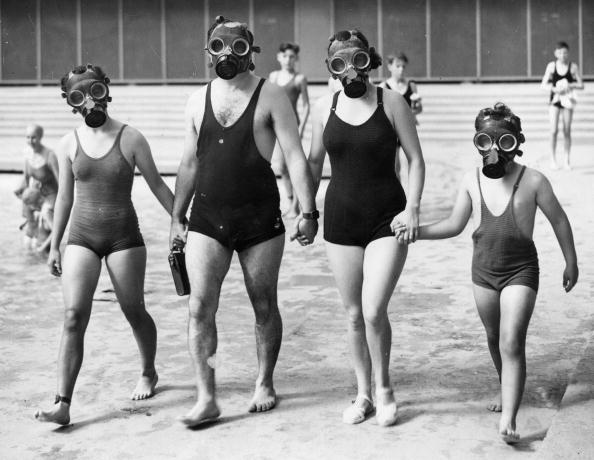 Gas masks were issued to all British residents during World War II because there was a true fear that the Germans would drop poison gas bombs on cities. One advisor to the British government warned that a quarter million people could perish in the first week of the war. Thankfully, his prediction never came true.

Next: Gas masks for kids had a less scary name.

Even children had gas masks

Babies were outfitted with special gas masks that were only to be employed during emergency situations. Children were issued “Mickey Mouse” masks – a name meant to make them seem less scary than they looked. People traveled with gas masks anywhere they went… just in case.

Next: People prepared for the war well in advance. 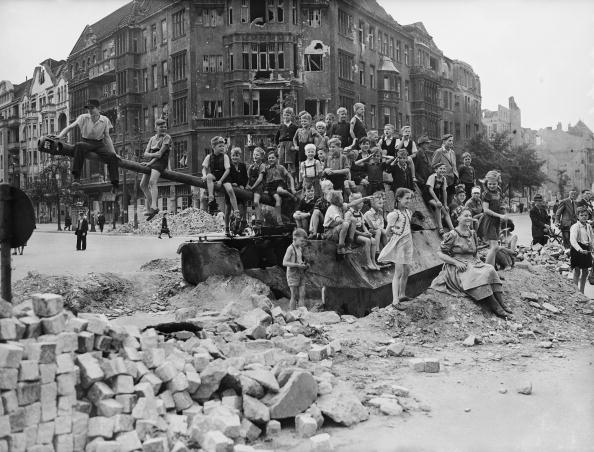 Next: Rationing wasn’t easy to get used to.

People learned to live with less 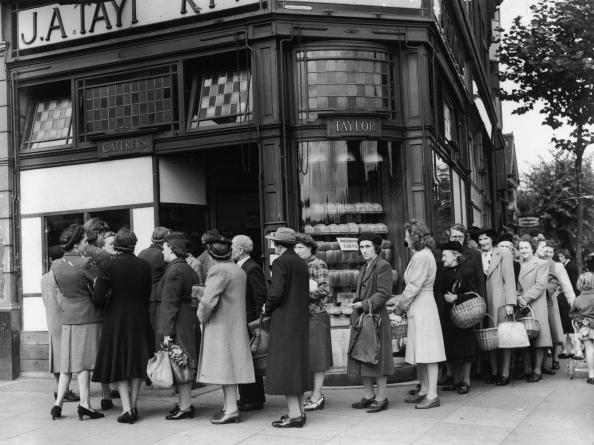 Rationing forced individuals and families to live with less than they were used to. The United States Office of War Information made a plea to all Americans when they said, “Do with less-so they’ll have enough.” The “they” this statement referred to was U.S. troops defending freedom and fighting against Nazis.

Next: Everyone lost a loved one.

Almost everyone lost someone in the war 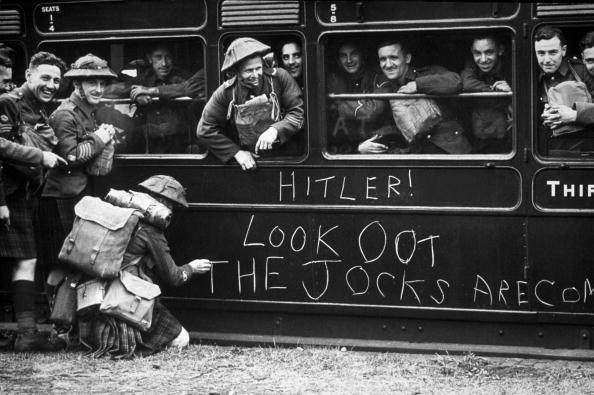 Obviously, people weren’t just suffering from a lack of butter and fewer new dresses during the war. Everyone knew someone who perished during conflicts – whether is a father, brother, uncle, nephew, friend, neighbor, or cousin, thousands were killed in the war. Even the ones who returned were often physically or mentally affected by the experience.

Next: Some people lost everything.

Homes could disappear in an instant 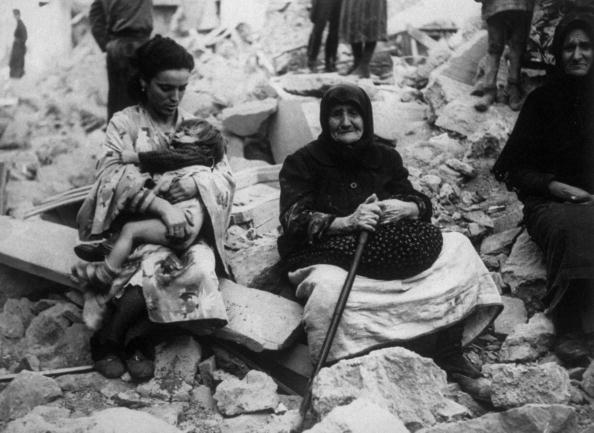 People losing loved ones was one of the hardest trials to endure. But besides that, citizens who lived in combat zones lived in perpetual fear that they too would lose their lives or their homes. Houses that had been in families for generations could be reduced to a pile of rubble in an instant.

Next: The war changed everything — for people and animals. 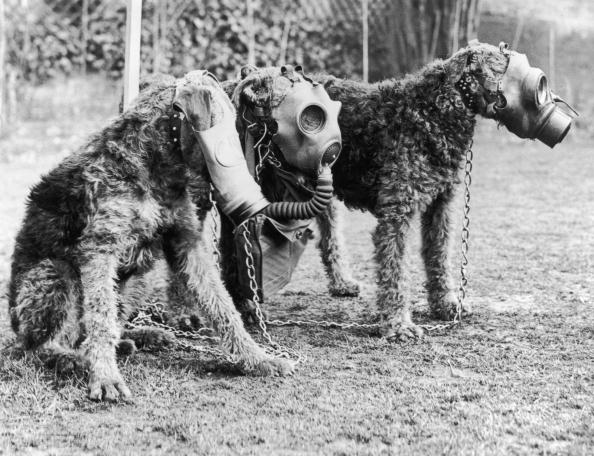 Across the globe, there was a general feeling that life was on pause – that it couldn’t resume until the war was over. Since every single aspect of life was different, people didn’t know how to function like they used to. It was like the entire world was collectively holding its breath for years.

Next: Refugees fled to safety. 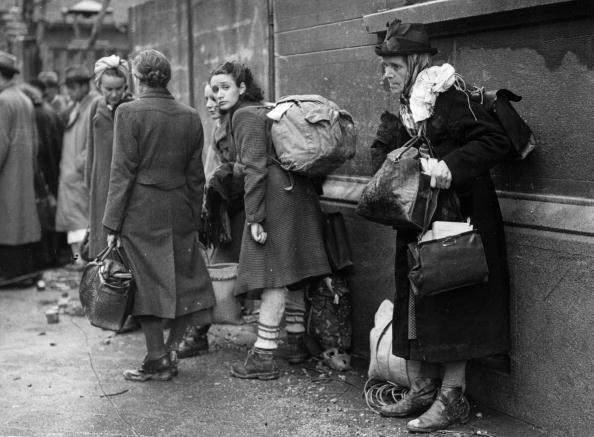 Refugees poured into safe zones to escape frequent bombings or flee from terrifying situations. Not that anyone felt safe anywhere they went – but at least some areas were less likely to get attacked. Thousands became homeless as cities crumbled under the attacks of the Axis forces.

Next: You couldn’t escape war talk.

There was no escaping talk of the war 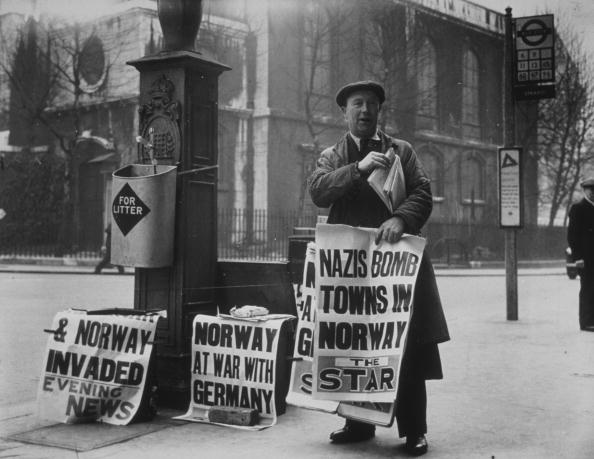 A newspaper seller in London, carrying the news that the Nazis had invaded Norway | General Photographic Agency/Getty Images)

It was impossible to avoid hearing about the war, even in places like movie theaters. Movie experiences included newsreels of recent battles followed by overly dramatized cartoons. There were also several documentaries about the war which were released as it was still happening.

Next: This leader was one of the worst ever.

Nazis encouraged citizens to inform on one another 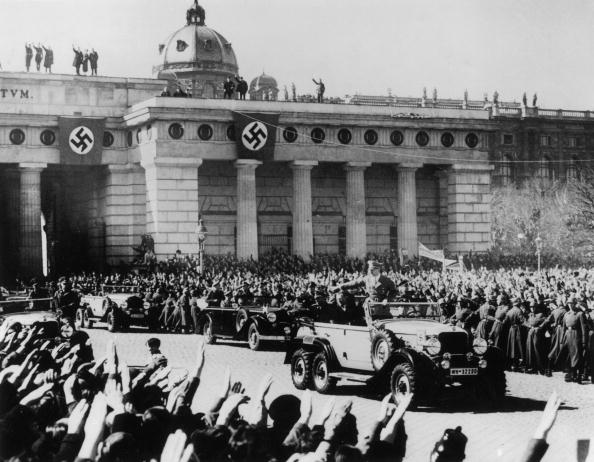 Hitler joined the Nazi party the year it was founded, in 1919, and became party leader in 1921. He became Chancellor of Germany in 1933 and his party took over the government. He is perhaps the most reviled public figure in history — and rightfully so. But members of the Nazi party followed him and were fiercely loyal. Neighbors were encouraged to inform on each other and many followed through, turning in friends and even members of their own families.

Next: People got sick of the war.

People wanted to go back to how things used to be 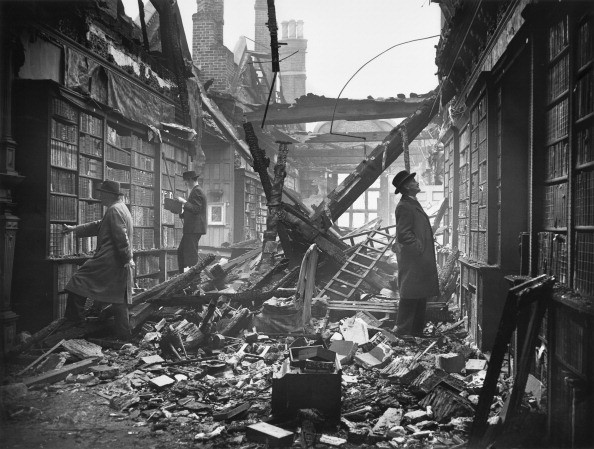 The longer the war raged on, the more people grew tired of the way it was affecting their daily lives. Citizens often felt hopeless as battle after battle yielded no significant changes, and it often felt like the war would go on forever. Everyone wanted to return to a carefree existence, the way it was before.

Next: These birds were part of the army. 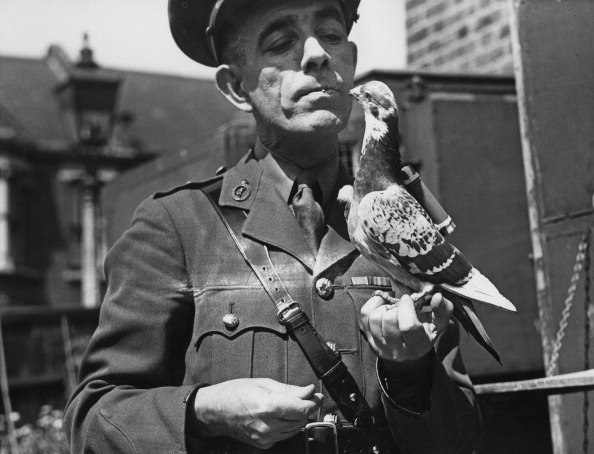 Between 1939 and 1945, more than 200,000 young pigeons were given the important role of joining the British Army Pigeon Service. These amazing birds could help recover wrecked aircraft during the war faster and more reliably than any emergency signals.

Next: Everyone had to make adjustments.

Everyone — rich or poor — had to sacrifice something

World War II had some equalizing power in former class-led societies. Rationing wasn’t restricted to the poor – everyone had to learn new ways to survive with less. In some cases, the working class benefitted as food prices were controlled and a greater emphasis was placed on providing balanced diets.

Next: Bravery helped keep hopes up. 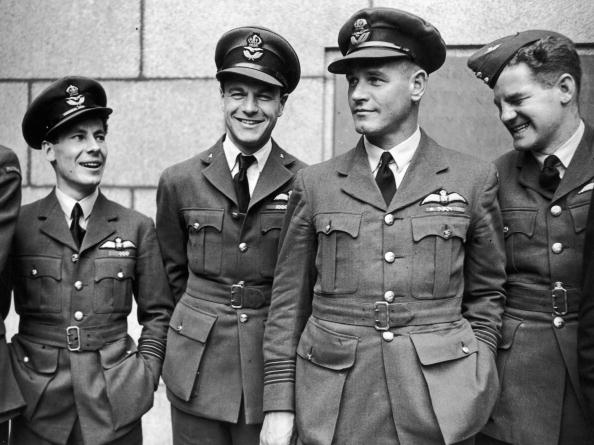 Looking back on World War II with a definite answer as to who would win, it can be hard to imagine just how frightening World War II must have been to live through. But continued victories by Allied powers — like the brave servicemen pictured above — gave hope to the people even on the darkest days.

Next: Women played a vital role in the war effort.

Women in the workforce became much more common 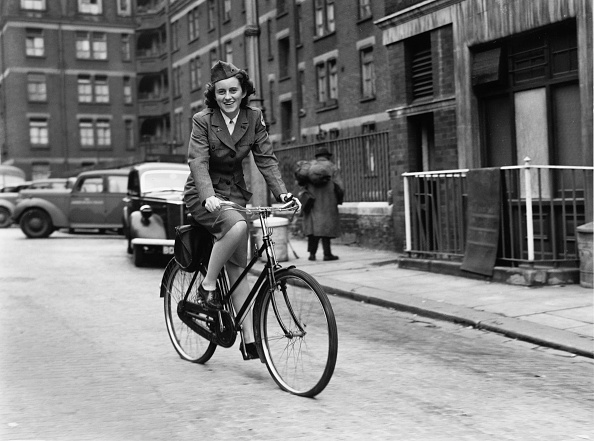 Women weren’t just working in factories during the war – they also took on non-factory jobs that were left vacant by newly enlisted soldiers. The percentage of women in the workforce climbed from 25 percent to 36 percent by the mid-1940s.

Next: Some ladies even joined the army.

Some women even became soldiers 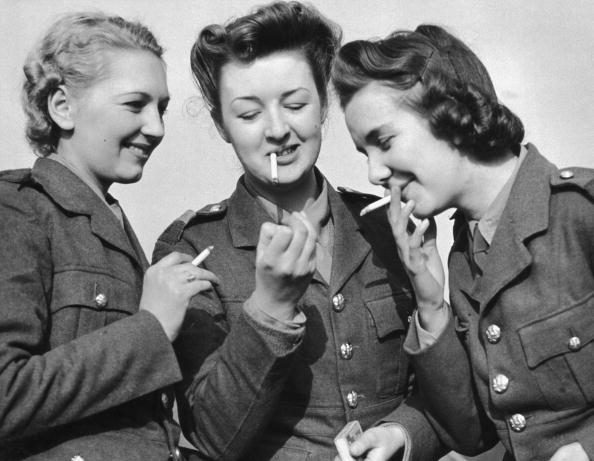 Three women of the ATS light up together | Keystone/Getty Images

Not all women stayed home to do factory jobs, however. The Auxiliary Territorial Service, or ATS, was the women’s branch of the British military. Women aged 17 to 45 were allowed to join and do important jobs such as become orderlies, drivers, postal workers, and ammunition inspectors.

Next: Life was very different during wartime.

People adapted to their new way of living 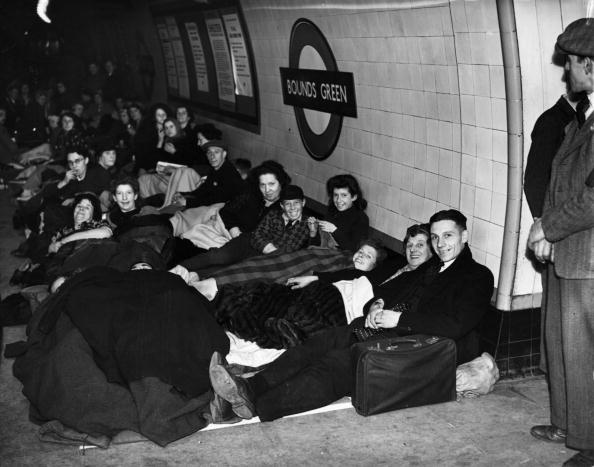 Governments came up with all kinds of ways to make the new way of life more tolerable. They distributed leaflets and came up with slogans that encouraged people to do the most they could to help with the war effort – and stop complaining. But people were worried that they weren’t getting told the whole truth.

Next: No one could turn on the lights. 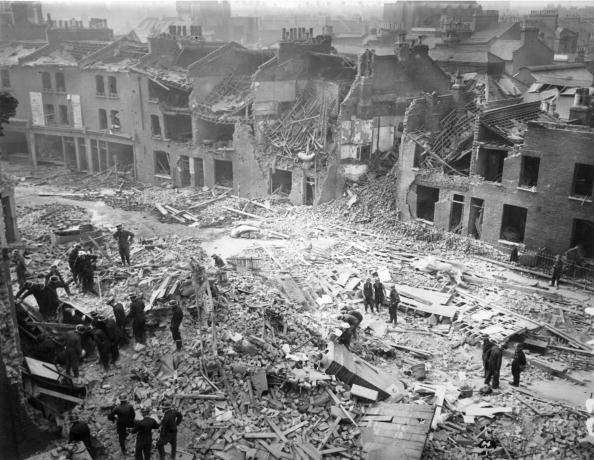 In Great Britain, one of the biggest changes to everyday life was blackouts. To help avoid detection by German bombers, citizens weren’t allowed to turn on any lights past dusk. At first, this seemed like great fun – city folks could suddenly see the stars in the night sky. But eventually, it grew tiresome and difficult to follow.

Next: Kids couldn’t have typical childhoods.

Children were robbed of carefree childhoods 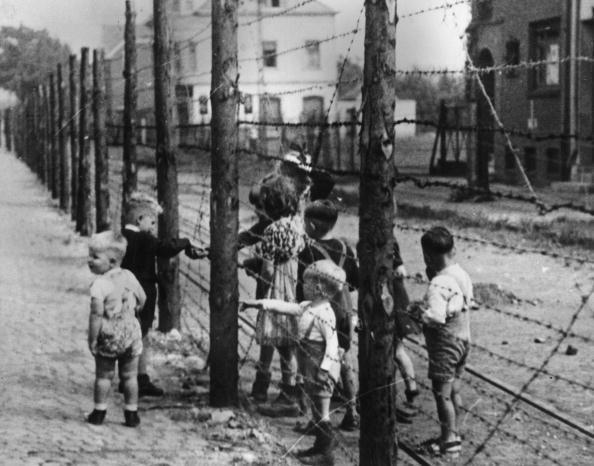 Adults were affected by the war, but children had some of the most formative experiences during war years. Almost all kids played war constantly. They practiced air raids in school and conversed about Nazis every single day. Not even children were shielded from the horrors of war.

Next: Even kids helped out.

Even kids helped with the war effort 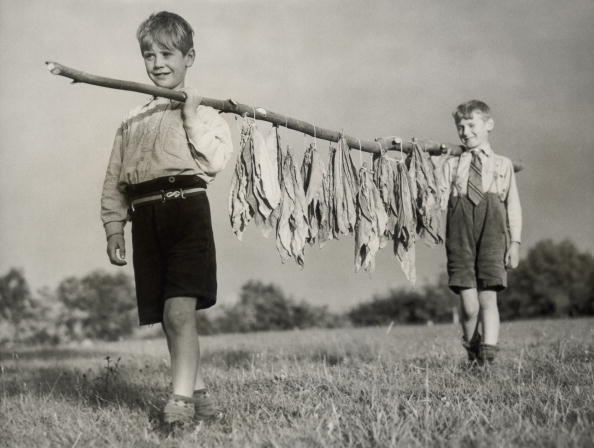 People came together to help with the war effort by collecting scrap metal, aluminum cans, and rubber, which all got recycled to produce items to be used in the war. No effort was too small and no person too young to contribute during this pivotal time.

Next: Adults knew who they were fighting for. 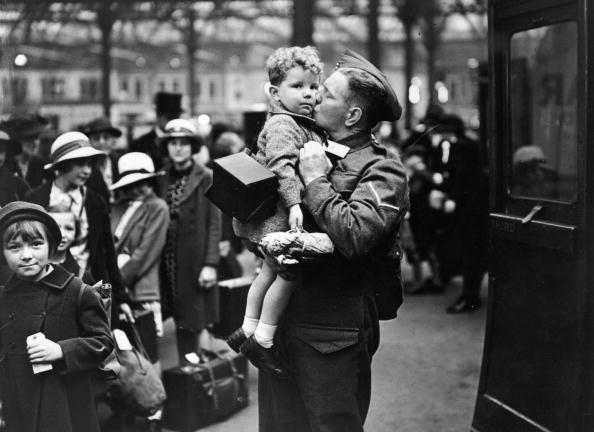 Children didn’t understand war, but they quickly learned to adapt to a new way of life, as children do. Young kids helped collect cans and materials to donate to the war effort. They may not have grasped the severity of the situation, but children played a very important role in World War II. Mostly, they reminded everyone what they were fighting for – the very future of the world.

Next: The cities weren’t as safe as the countryside. 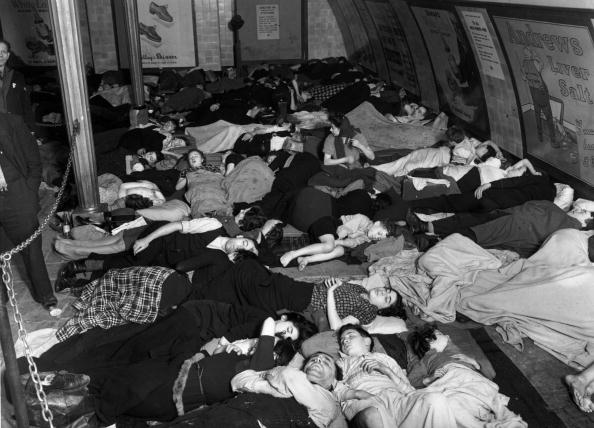 Many people from densely populated areas of London slept in underground stations for safety because of nightly bombing raids. The weirdness of sharing a subway station for nighttime quickly started to feel normal  — just like so many other things that only happened during wartime.

Next: Not everyone sacrificed as much.

Rationing was easier for poor folks 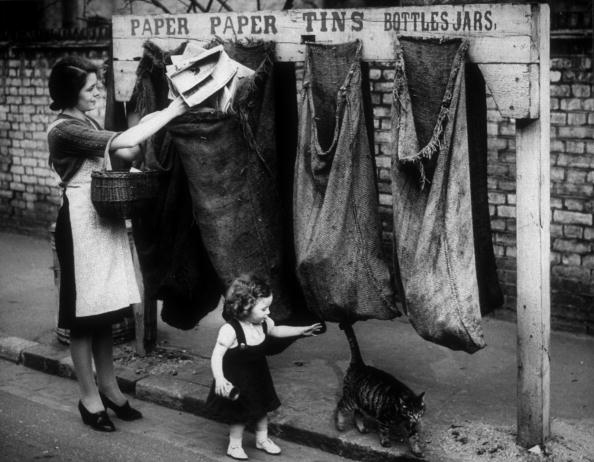 In some ways, being working class before the war had its advantages. Concepts such as rationing were not new to people who were used to not getting new clothes or eating fresh fruit with every meal. One British housewife put it this way in 1942: “We’ve been rationed here for years, so it’s nothing new to us.”

Next: Factories were vital for manufacturing tools for war.

Women took over the manufacturing jobs 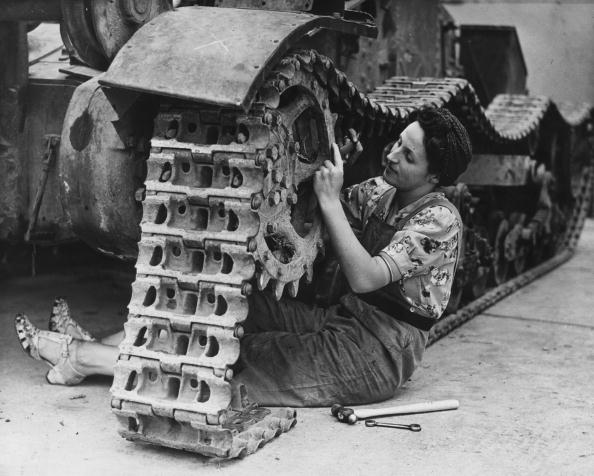 In order to put up a defense during the war, the United States had to manufacture huge quantities of airplanes, tanks, warships, rifles, and other armaments. All factory and production workers played an important role in making these things. For the most part, women took over factory jobs while the men fought the physical battles overseas.

Next: Some people followed the rules — others didn’t. 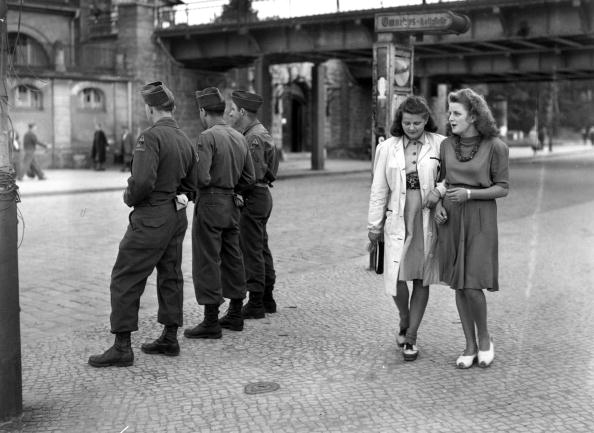 There was a strict no fraternization policy between American or British troops and Germans. Still, not everyone followed the rules. The “end of the world” feel to the war inspired plenty of illicit romances and would be one catalyst for the baby boom in the coming years.

Next: Eventually, it was all over.

The good guys won the war 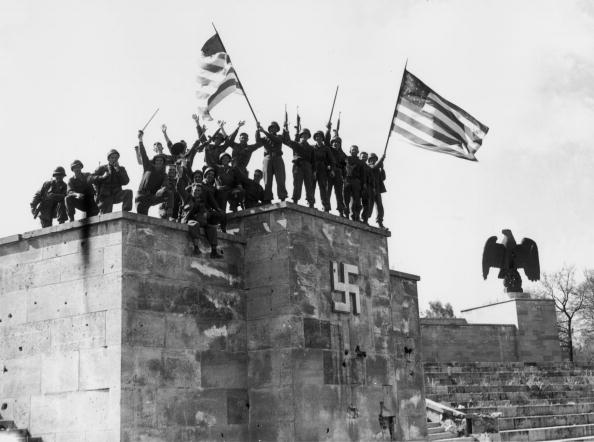 V Day or VE Day, short for Victory Day, occurred on May 8, 1945 when Germany officially surrendered to the Allied forces. This day finally meant the end of World War II and the beginning of a new, promising future free from Nazis. That political party was outlawed shortly after during the Nuremberg Trials.