These Horrifying Train Crashes Are the Worst in U.S. History

A horrifying train crash may sound like a rare occurrence, but the truth is, it happens more often than we’d like to think. And when it does, the damage, not surprisingly, is devastating.

So, if you can stomach the disturbing details behind the worst train crashes in U.S. history, stick around as we count down to the No. 1 deadliest collision. 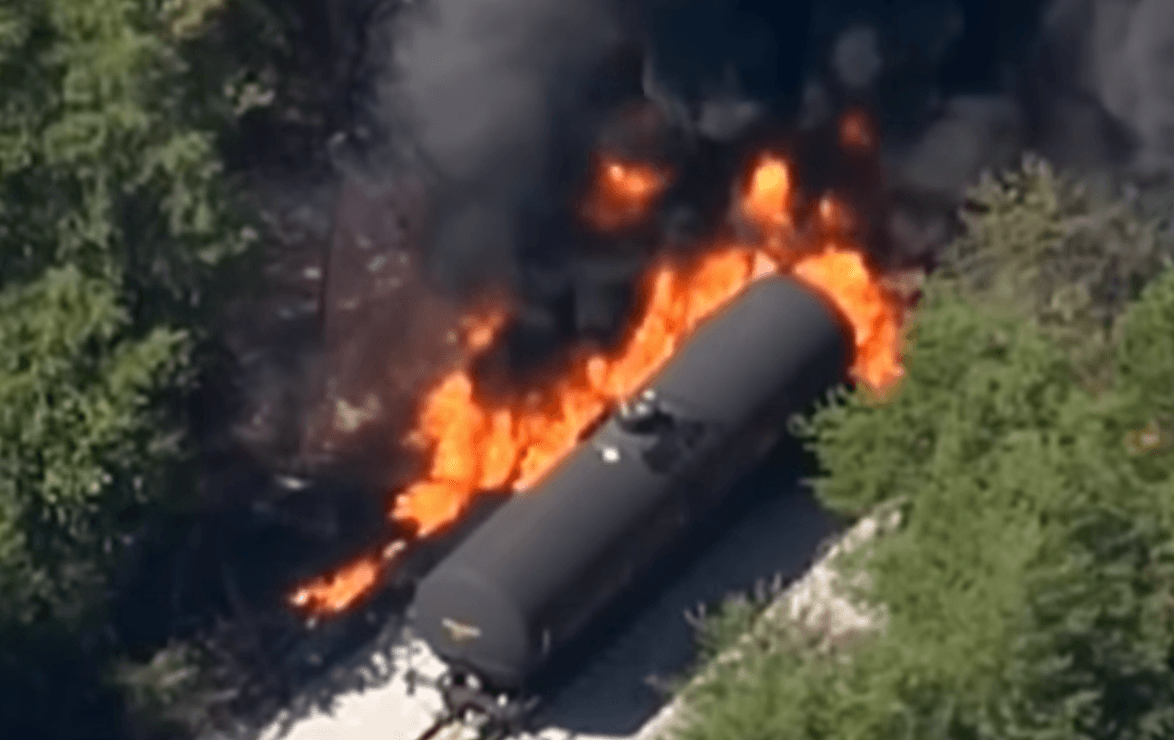 Thankfully no one died in the crash, but there was serious displacement. | CBS This Morning via Youtube

Even though no one was killed or injured in this accident, this terrifying crash had a huge impact on the community. While carrying toxic industrial materials from Cincinnati to Georgia, a train derailed in eastern Tennessee, producing a toxic flume of smoke. The result? 5,000 residents within a two-mile radius were forced to evacuate their homes.

Next: A crash in Florida 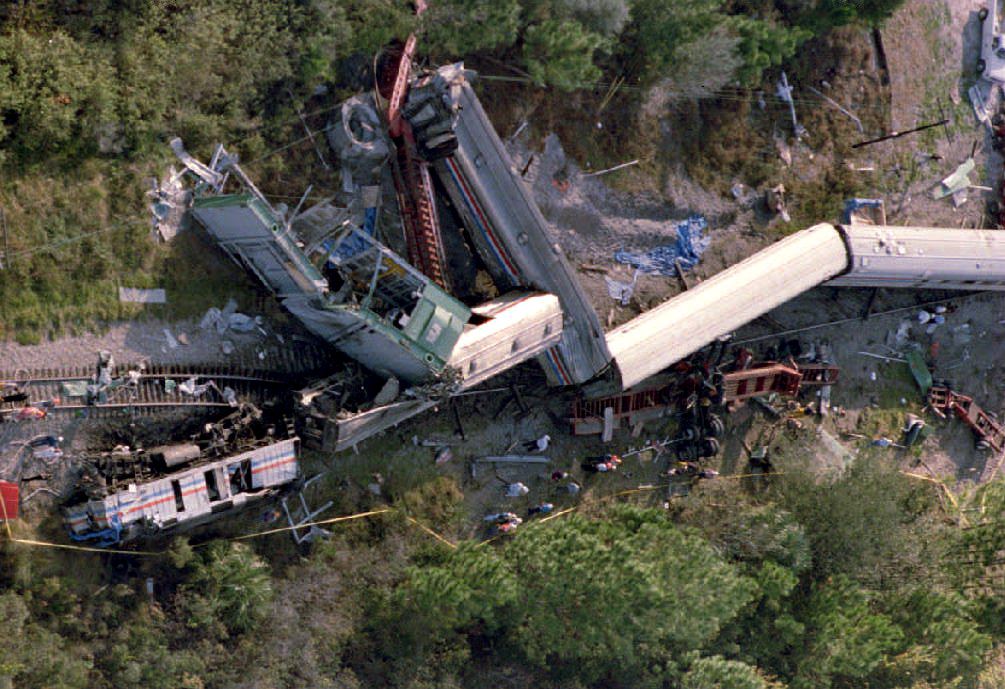 While transporting 103 passengers from Tampa, Florida to New York, an Amtrak train derailed in Kissimmee, Florida. Of the 103 passengers on board, 80 were wounded after the train collided with a tractor-trailer.

Next: A crash in Arizona 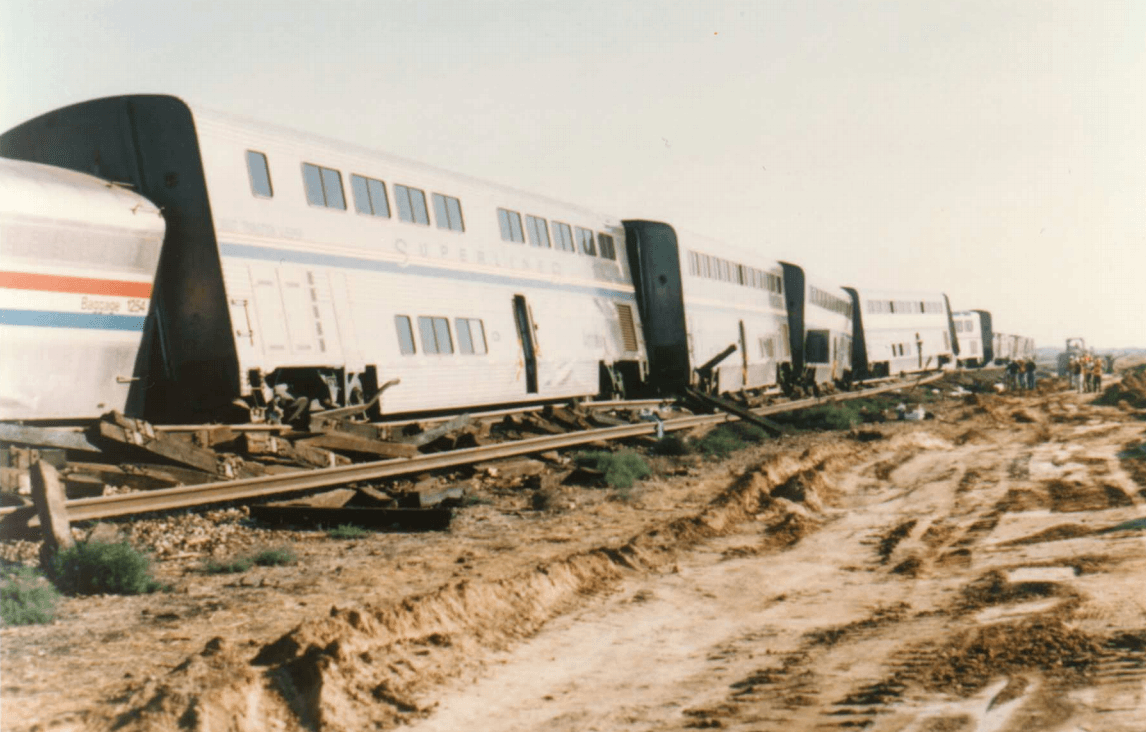 The crash was the result of a bad storm. | National Transportation Safety Board

This early-morning derailment resulted from a bad storm just outside of Kingman, Arizona. During the storm, a railroad trestle broke, causing an Amtrak passenger train to derail. Luckily, and unlike most other instances on this list, no one was killed in the accident.

Next: A crash in South Carolina 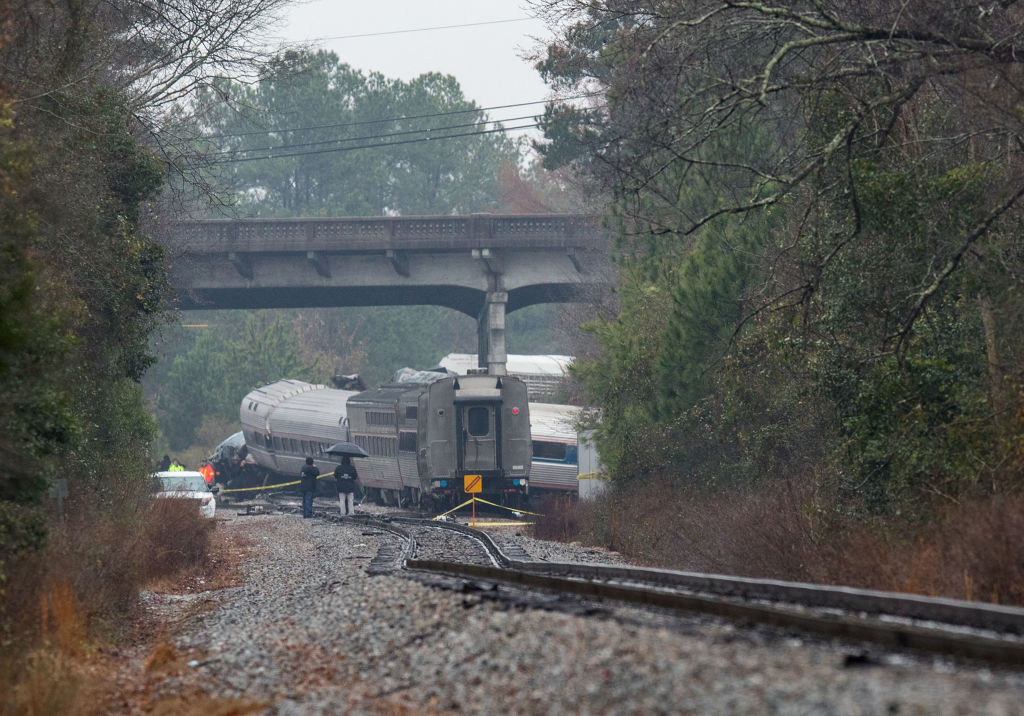 On a trip from New York to Miami, an Amtrak passenger train crashed into a freight train, which had been stationary on the tracks. The crash resulted in two deaths and over 100 injured people.

Next: A crash in New Jersey 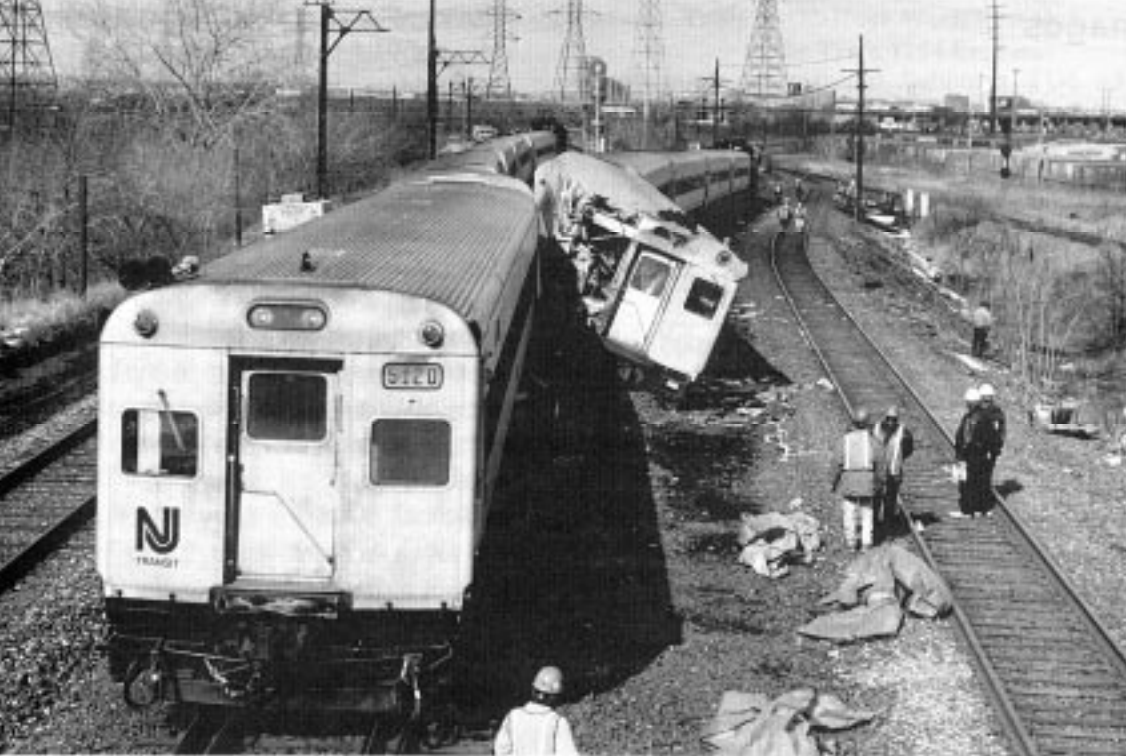 Two trains were involved in a head-on collision. | National Transportation Safety Board

New Jersey Transit delivers countless commuters to and from New York City and the surrounding suburbs and metropolitan area on a daily basis. But in Feb. 1996, disaster struck when two trains were involved in a head-on collision.

Eventually, investigators discovered that the engineer of the eastbound train had missed a red signal aspect due to a color vision deficiency. The engineer had not, in fact, reported his deficiency to New Jersey Transit during his annual medical exam.

Next: A crash in Washington state 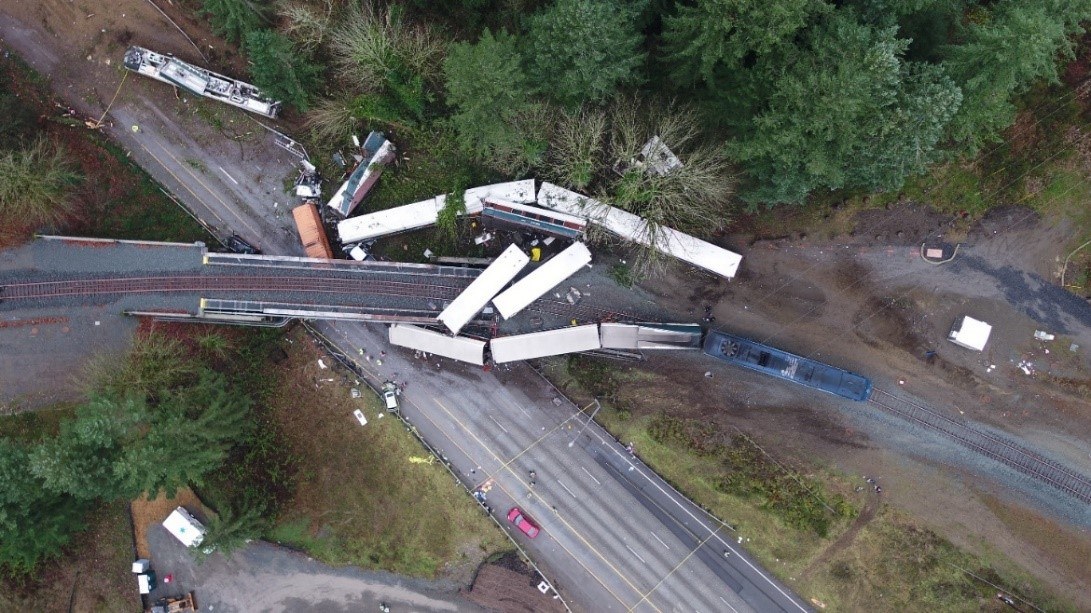 The engineer failed to break in time. | National Transportation Safety Board

During its inaugural journey on a new service route, an Amtrak train derailed on its way from Seattle to Portland. Because the engineer failed to brake in time, 13 of the train’s 14 cars launched off both sides of an overpass into rush hour traffic.

Next: A crash in New York 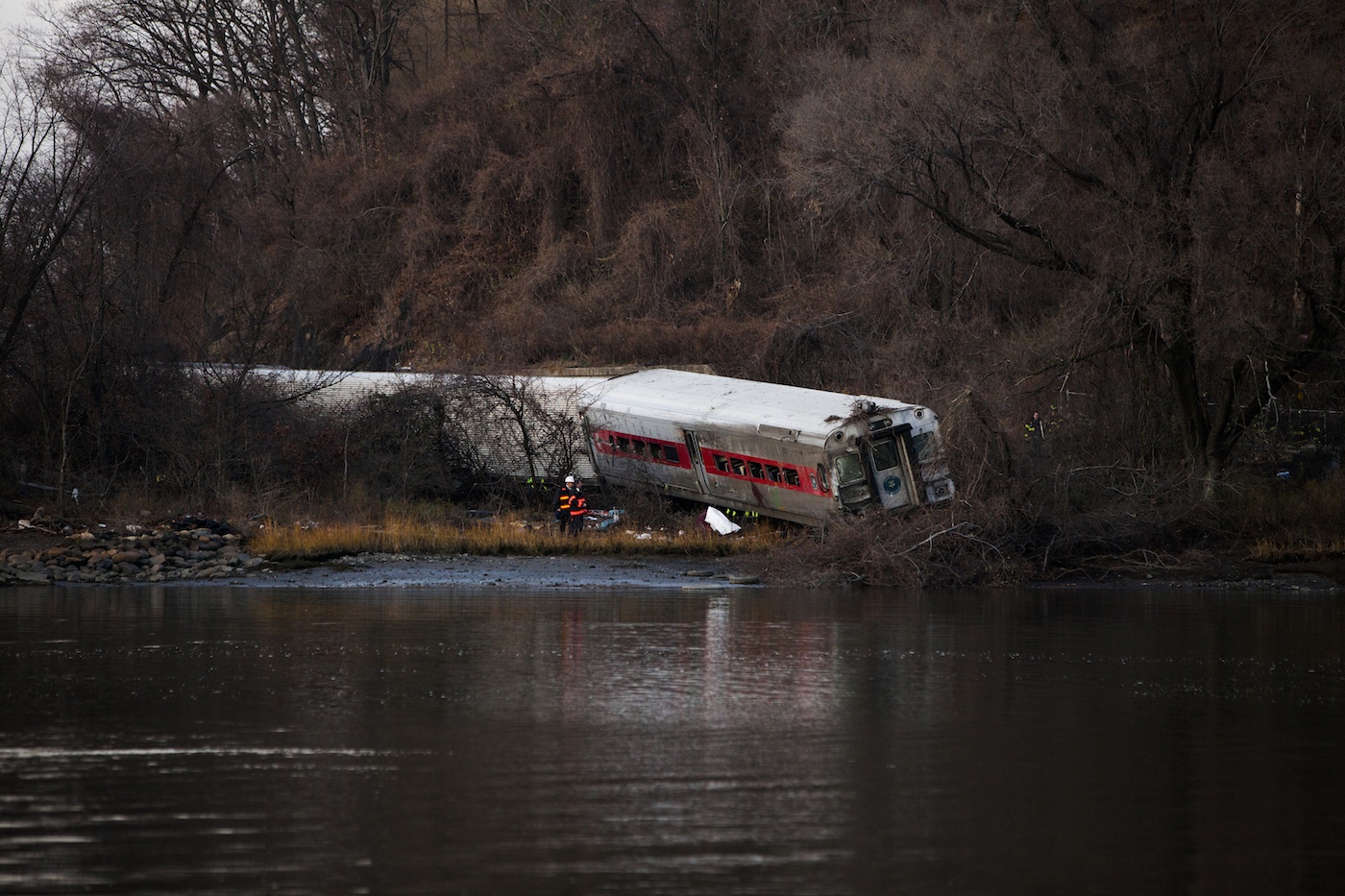 The train didn’t drop its speed on a curvce. | Christopher Gregory/Getty Images

Just before the approach of the Spuyten-Duyvil train station, the speed limit for trains drops from 70 mph to 30 mph. Sadly, one Metro-North Railroad passenger train failed to obey; the train was traveling at 82 mph around a sharp curve, causing it to derail.

During the investigation, it was revealed that the engineer, William Rockefeller, fell asleep “due to undiagnosed severe obstructive sleep apnea exacerbated by a recent circadian rhythm shift required by his work schedule.” Following the accident, the Metropolitan Transportation Authority added an automatic safety braking system to that specific stretch of tracks.

Next: A crash in Florida 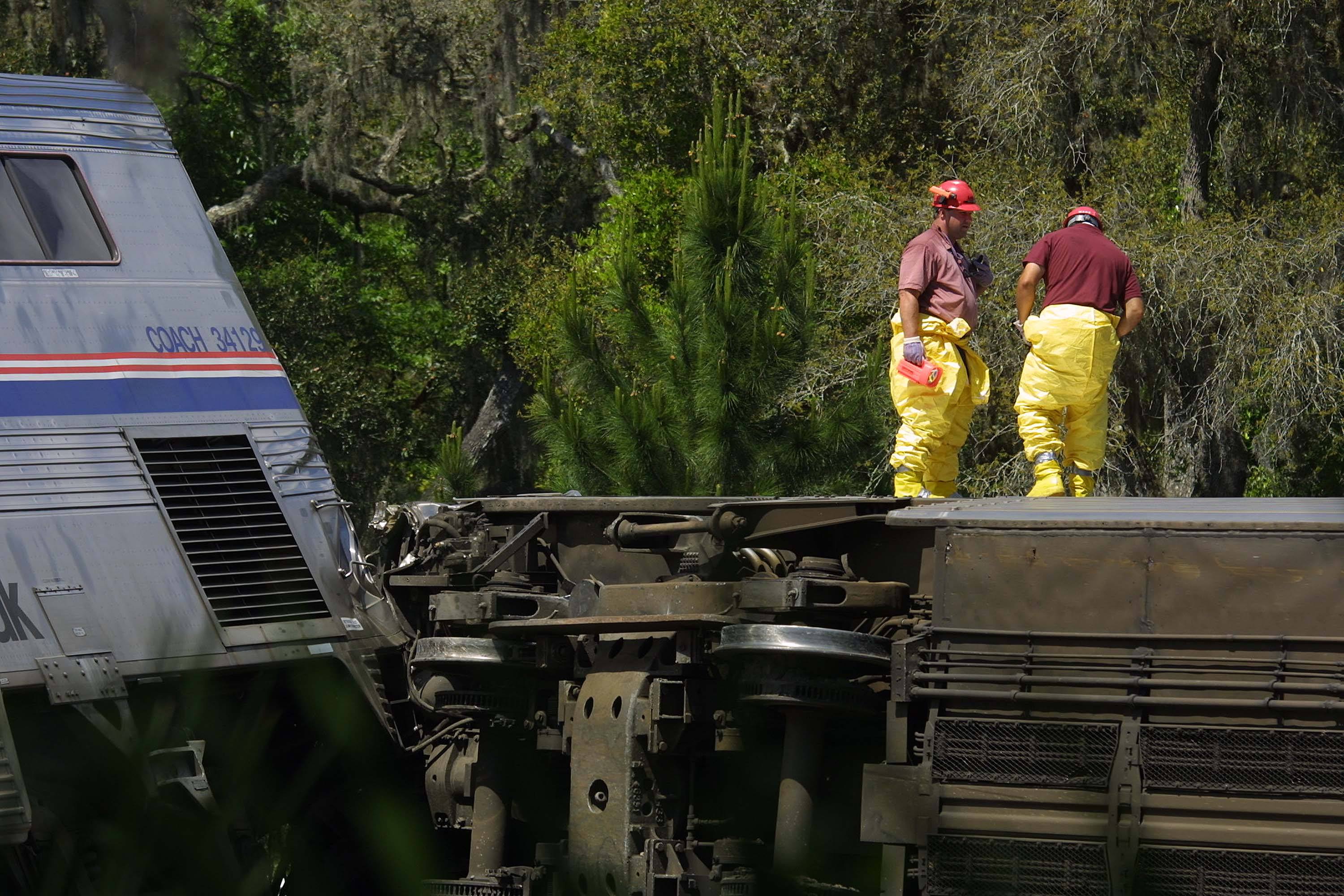 The track bucked due to heat. | Chris Livingston/Getty Images

Traveling at 56 mph, an Amtrak Auto Train derailed in Crescent City, Florida. Following the accident, the National Transportation Safety Board found the crash resulted from inadequate track-surfacing operations, which led to a heat-induced track buckle.

Next: A crash in New York

The train ran into an SUV on the tracks. | Wikimedia Commons

A northbound Metro-North Railroad passenger train was traveling at 58 mph when it crashed into an SUV that was stopped on the tracks. When the engineer spotted the vehicle, he honked the horn and hit the emergency brakes. Unfortunately, it didn’t stop the train from crashing, resulting in both the SUV and the lead rail car being engulfed in flames. Five train passengers and the car driver were killed.

Next: A crash in Nevada 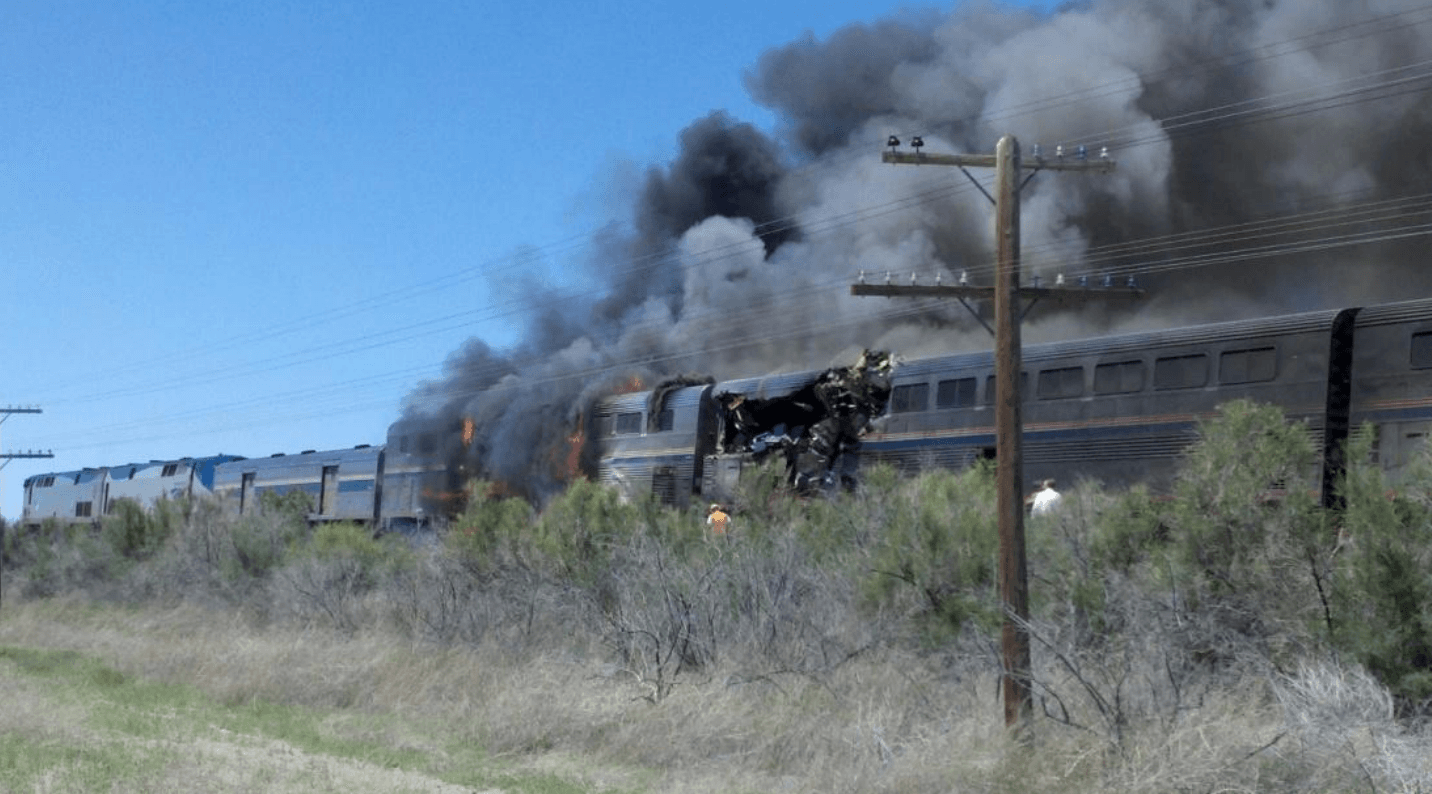 On a route from Chicago to Emeryville, California, an Amtrak passenger train was struck at a crossing by a heavy commercial truck. The truck driver, who was inattentive and failed to obey pertinent crossing signals, was killed in the collision, along with the train conductor and four passengers.

Next: A crash in Philadelphia 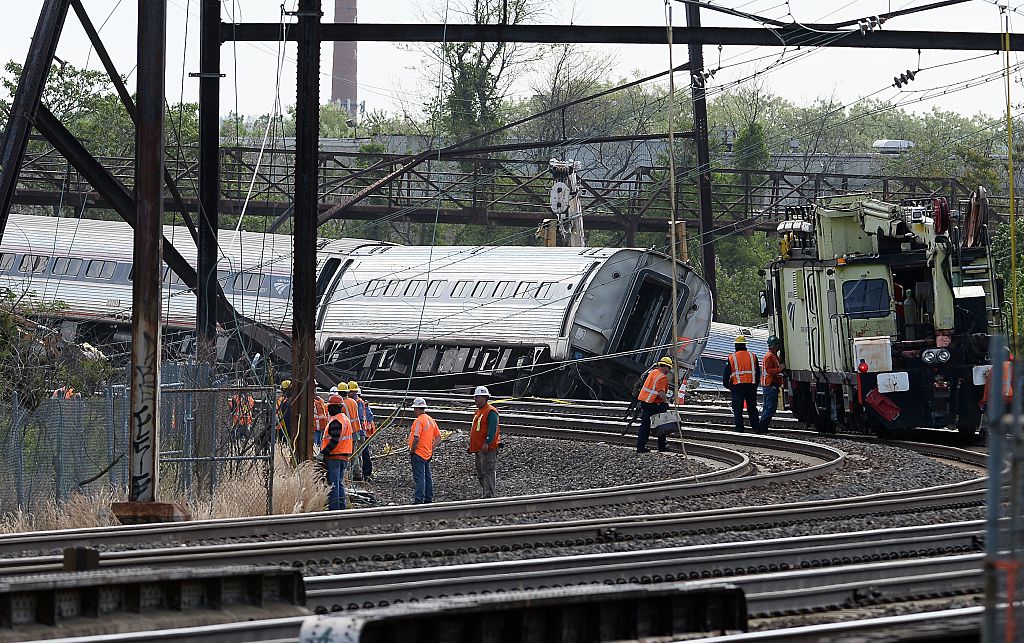 The train was going 50 mpg over the speed limit. | Jewel Samad/AFP/Getty Images

Just outside of Philadelphia, an Amtrak passenger train was heading east when it derailed. The cause? The train was going over 100 mph around a curve where the speed limit is 50 mph. According to records, the crash was the result of human error and high speed.

Next: A crash in Washington, D.C. 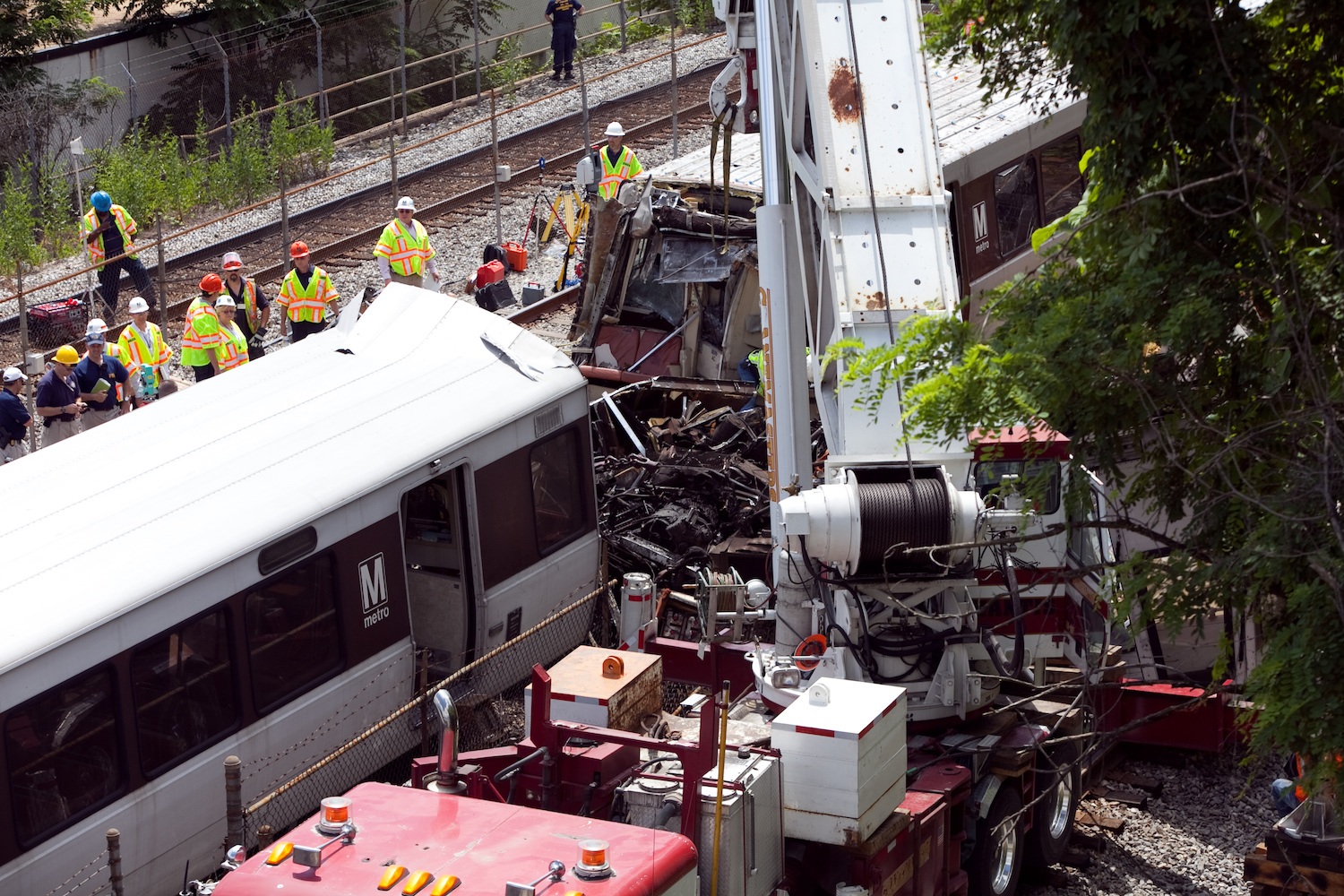 The crash was caused by a computer failure. | Brendan Hoffman/Getty Images

Are humans better than computers? Perhaps, at least in this case.

In 2009, one D.C. Metro train, which was computer-driven, failed when it crashed into the back of another train. In fact, it was the deadliest accident in the Metrorail’s history. Shortly after the crash, investigators found that electronic flaws were to blame, and computer-driven Metro trains were shut down for years.

Next: A crash in Maryland 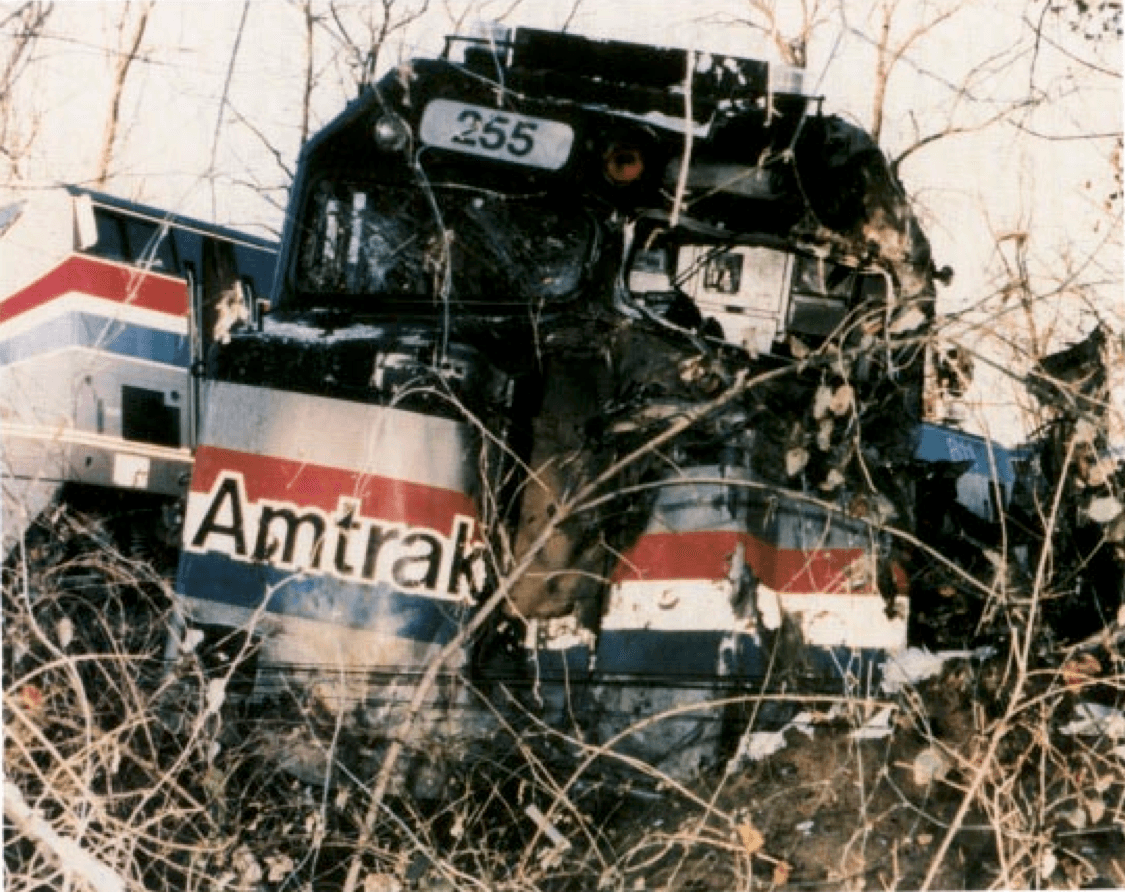 The engineer was distracted. | National Transportation Safety Board

On a track just outside D.C., a Maryland Rail Commuter train collided with an Amtrak passenger train when the former failed to stop at Georgetown Junction. The cause? According to investigators, the engineer had been distracted by various factors.

Next: A crash in Illinois 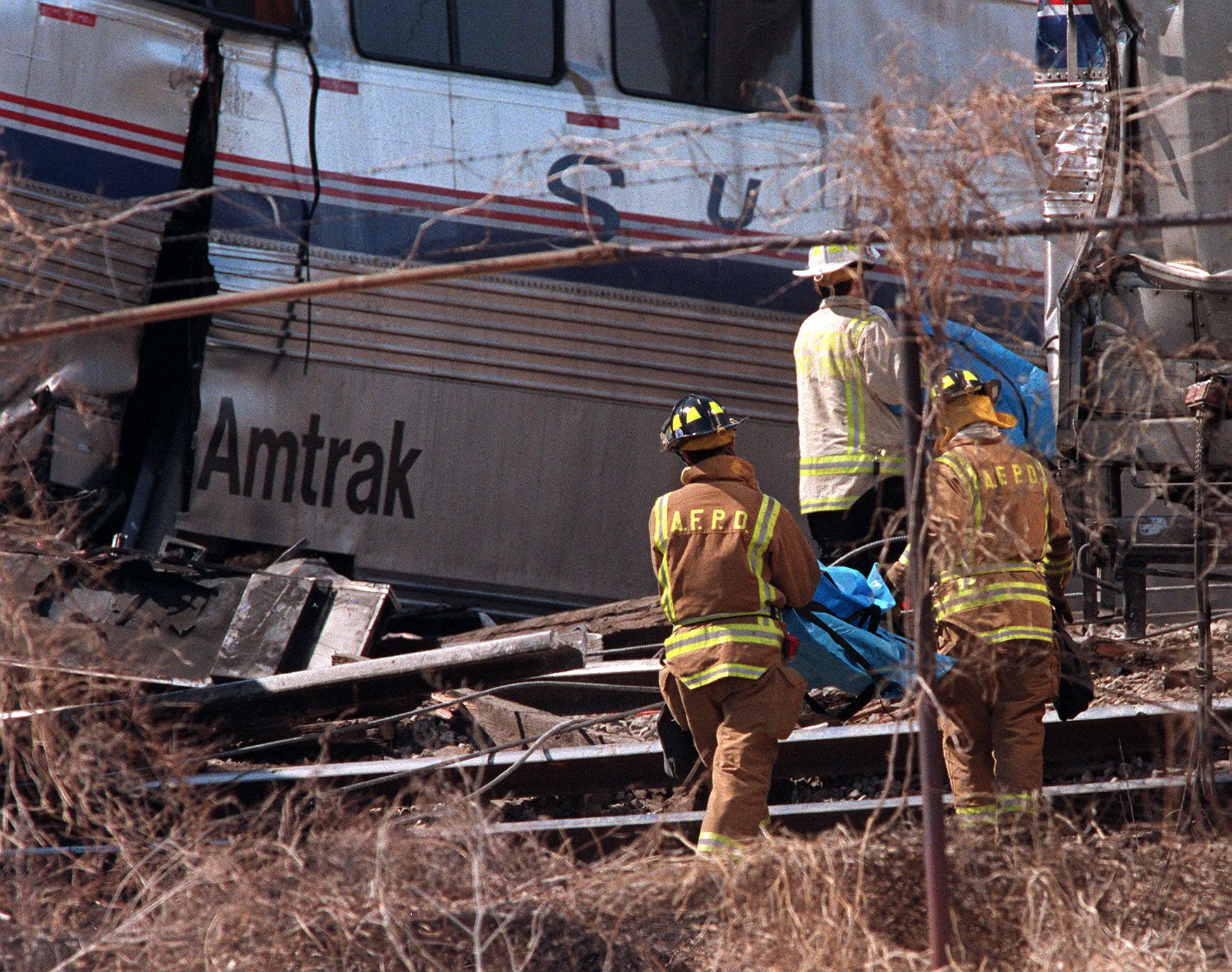 The train collided with a semi-trailer. | Jay Crihfield/AFP/Getty Images

When an Amtrak train collided with a semi-trailer truck, the train derailed 50 miles south of Chicago. The crash resulted in 11 deaths and about 100 injuries.

Next: A crash in California 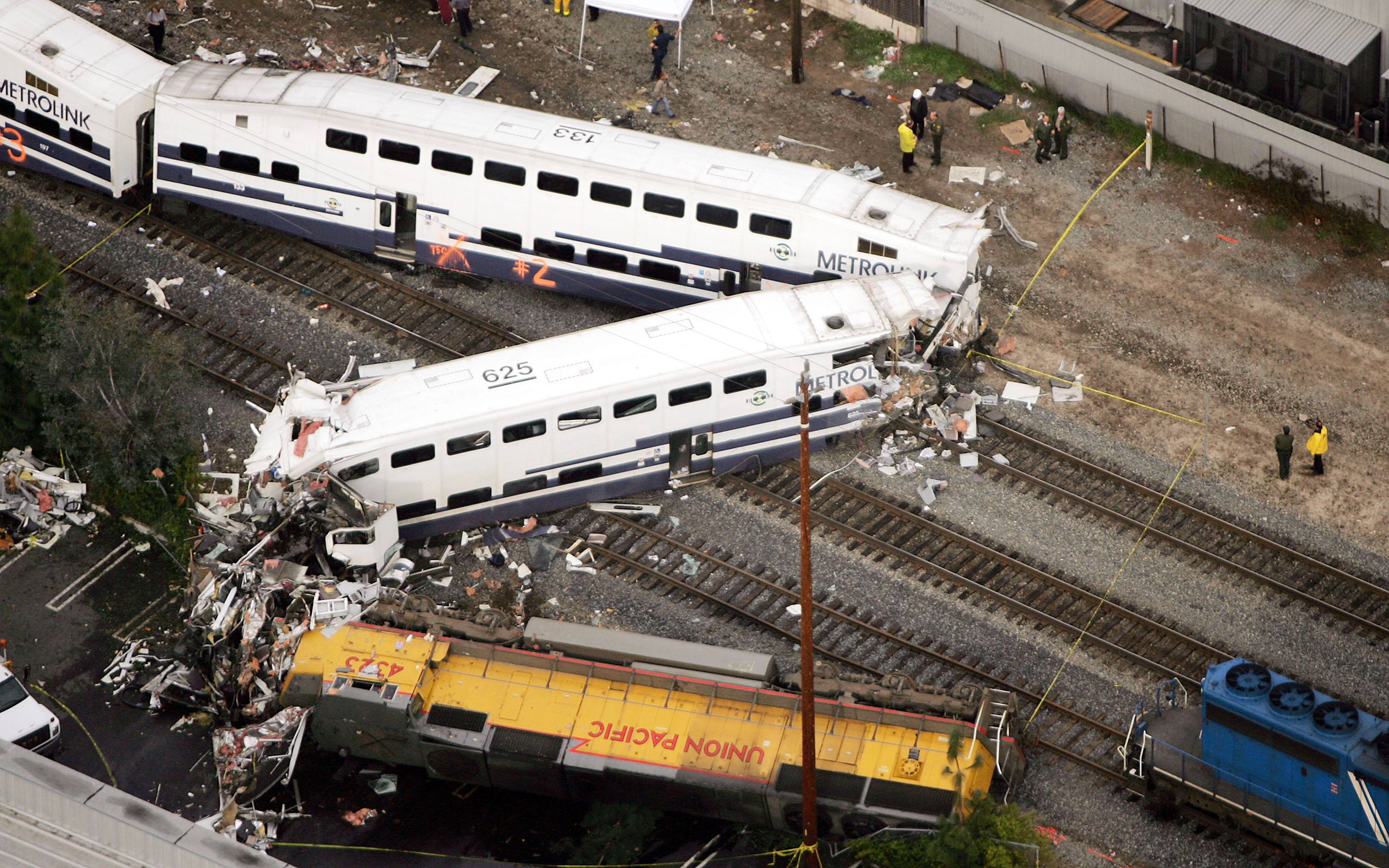 The train crashed into an abandoned SUV. | David McNew/Getty Images

A Metrolink train derailed in Glendale, California when it crashed into an abandoned SUV. The passenger train then slammed into a parked freight train, resulting in 11 passenger deaths.

Next: A crash in California 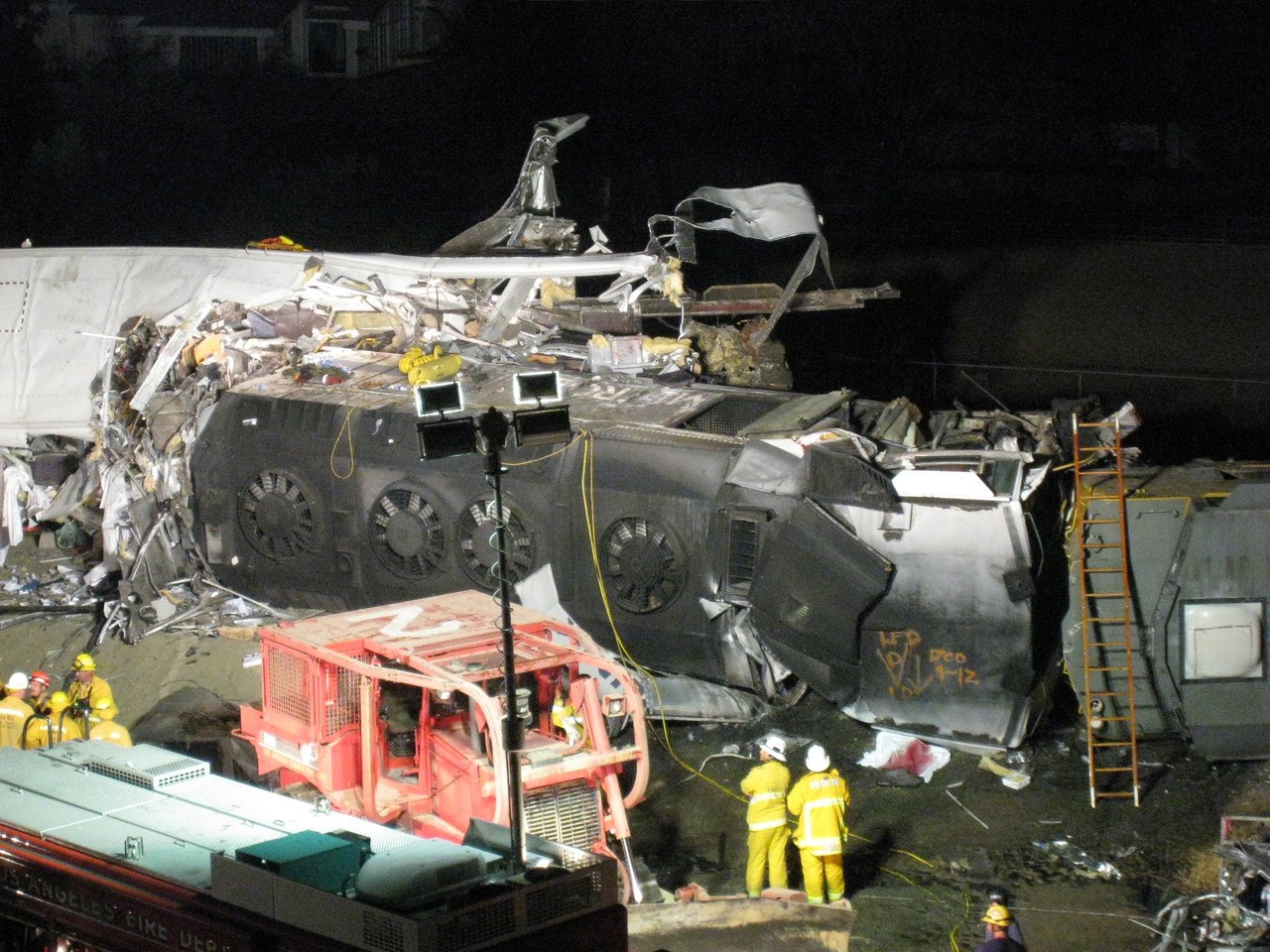 If there was ever a lesson about texting and driving. | Craig Wiggenhorn/Wikimedia Commons

You shouldn’t text and drive. And you should text and operate a train, either, because it can result in a major accident.

In 2008, a Metrolink passenger train collided with a Union Pacific freight train on a sharp curve. How? Well, the engineer was texting, which caused him to miss a stop signal, resulting in one of the worst train crashes in U.S. history.

Next: And the deadliest crash on the list is … 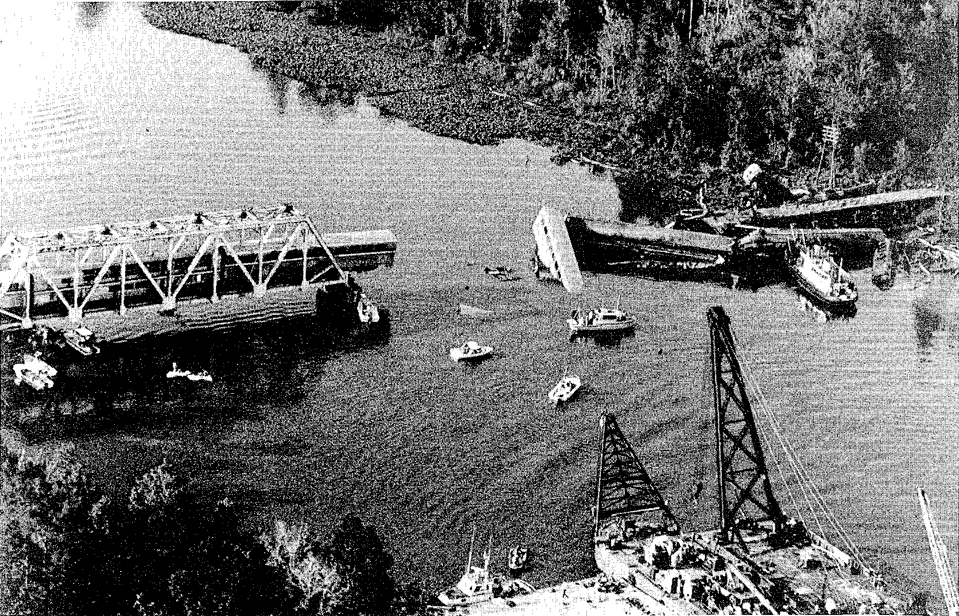 In a terrifying scene, an Amtrak train was flung into the water after hitting a deformed railroad bridge. So, how did the bridge become deformed in the first place? According to reports, a towboat operator had turned into a prohibited area within the Alabama marshes, displacing the railroad bridge. When the train hit the tracks, it derailed, leaving 47 people dead.

Read more: The Most Horrifying Accidents and Deaths In Disney Theme Park History