These U.S. Presidents Had The Most Children and Grandchildren

You would think it’s easy to figure out how many children and grandchildren U.S. presidents had when they took office. Not so. Back in the day, stillborn children and those who died young often didn’t have their births recorded. Add in the fact that genealogy has become an American hobby and that historians often come up with different information and you can understand why it’s downright difficult to give an exact number.

One thing we know for sure: Only one president, James Polk, had no children when he entered office — or when he left it. Keep reading to find out which presidents had the most children and grandchildren — biological or not — when they entered the White House. 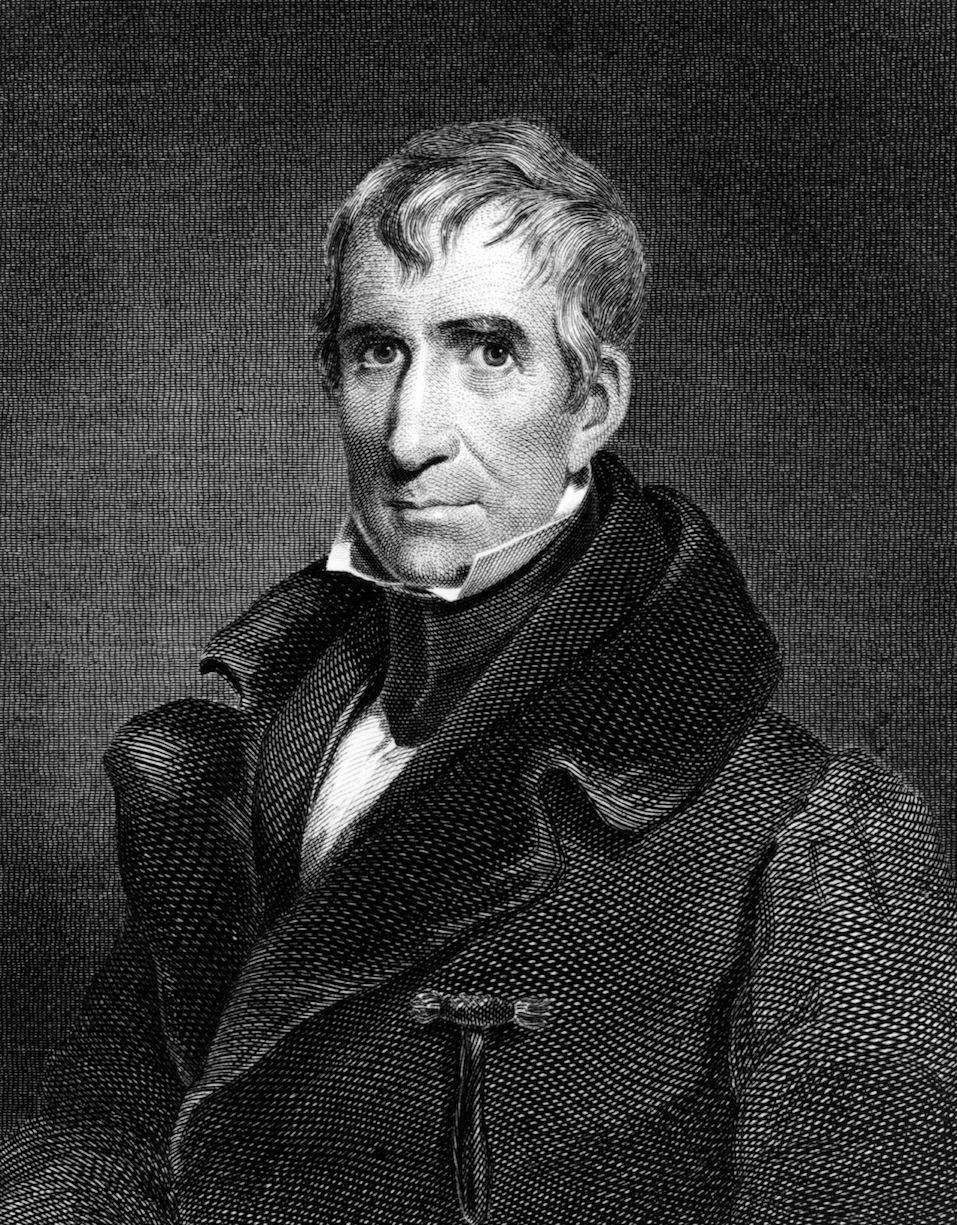 Of their 10 children only four survived. | Hulton Archive/Getty Images

American military office and politician William Henry Harrison entered the White House in 1841 as the ninth President of the United States. At the time, he was the oldest President to be elected and the first to die in office — from pneumonia on his 32nd day of service, according to History.

He married Anna Tuthill Symmes, despite her father’s feelings that he wouldn’t make a good husband because he had a military career. The Harrisons eloped and subsequently had 10 children. Six of those 10 died before Harrison took office. One of Harrison’s sons, however, John Scott Harrison, became a U.S. Ohio congressman and fathered Benjamin Harrison, who became the 23rd U.S. president.

Next: You won’t believe who tied with William Henry Harrison 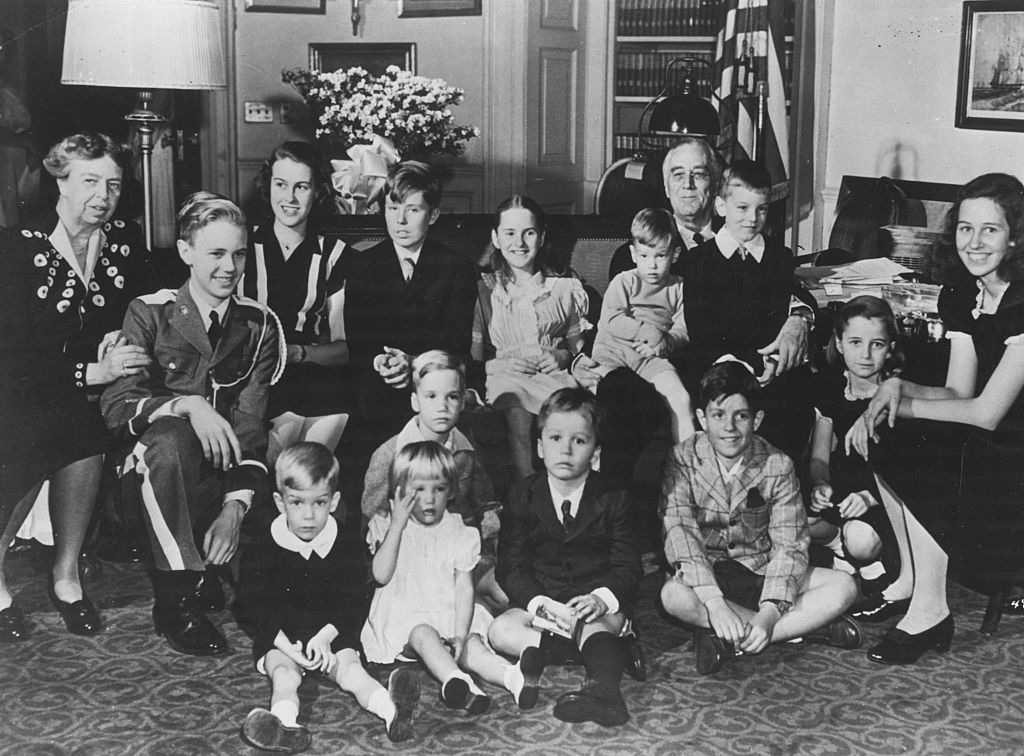 And these are just the grandchildren. | Keystone Features/Hulton Archive/Getty Images

When Franklin D. Roosevelt was elected president in 1932 he was serving second term as governor of New York. The country was deep in the Great Depression, and Roosevelt restored the American public’s confidence through his radio-broadcasted “fireside chats.” FDR went on to serve three more terms in the White House and died in office in 1945, according to History.

In 1905 he married Theodore Roosevelt’s niece, Anna Eleanor Roosevelt, who was also his distant cousin. They had one daughter, Anna, and five sons, four of which survived until adulthood and one who died when he was an infant. 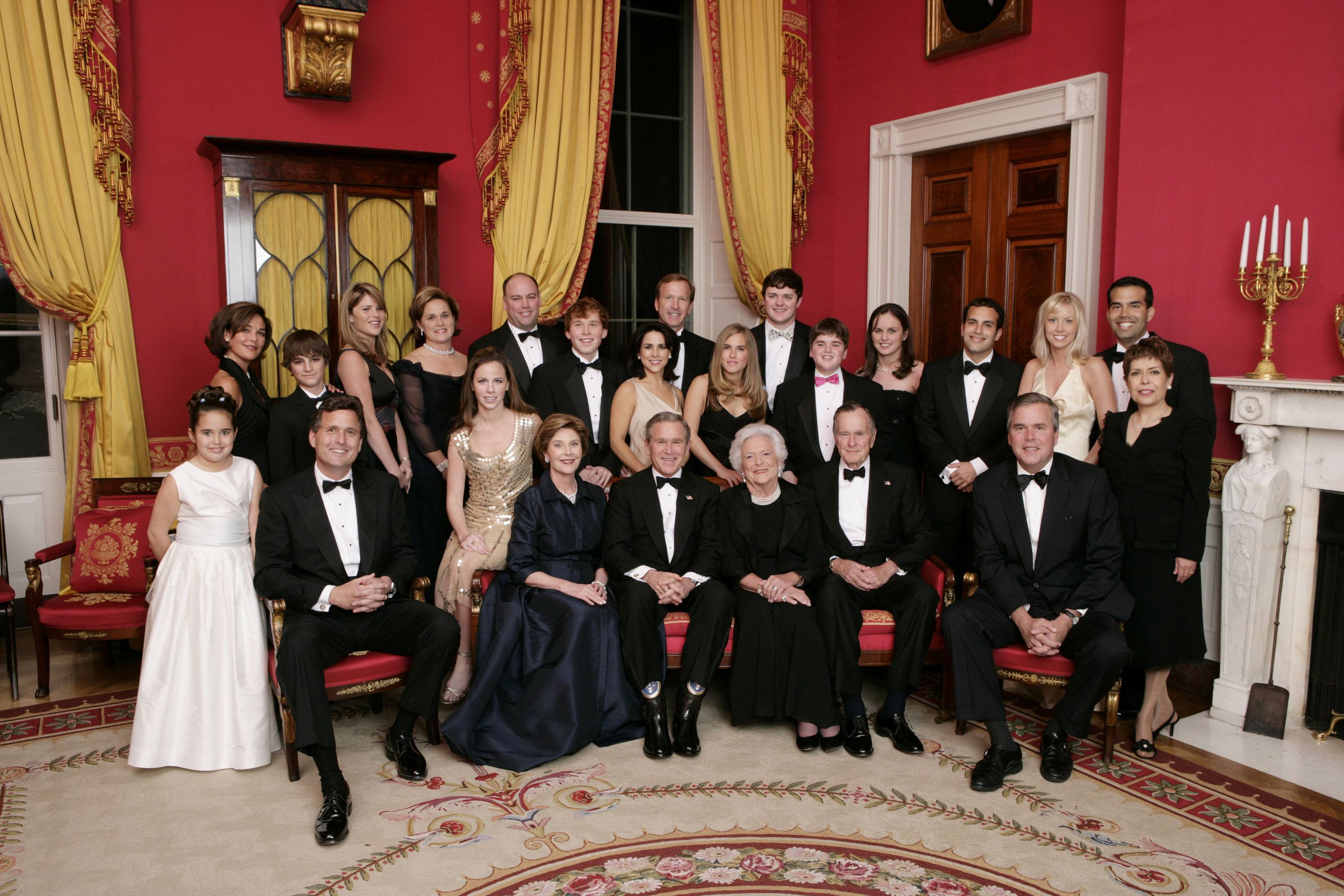 Quite a political family. | Eric Draper/White House via Getty Images

George H. W. Bush served as the 41st President of the United States from 1989 to1993, according to the website The White House. His goal, you might recall, was to make the country “a kinder and gentler nation.” After he was awarded the Distinguished Flying Cross for bravery in action during World War II, Bush married Barbara Pierce in 1945. The Bushes had six children: George, Robin, Jeb, Neil, Marvin, and Dorothy. Sadly, Robin died as a child.

Next: No one needs this many children. 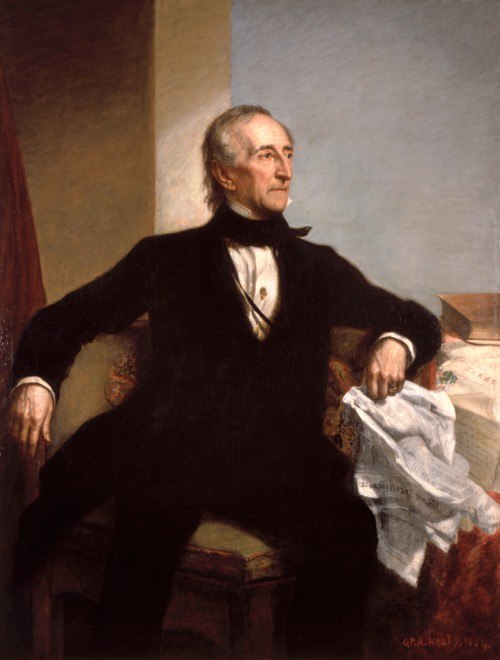 He had a whopping 15 kids. | The White House Historical Association

According to History, John Tyler served as the 10th American president from 1841 to 1845. He assumed office after William Henry Harrison died in office just months after he entered the White House.

At 23, Tyler married Letitia Christian in 1813 and had eight children with her. When she died from a stroke in 1842 she became the first first lady to die while her husband was president. Tyler also became the first president in office to get married — after she died, he married New Yorker Julia Gardiner, who was 30 years younger than he. They had seven children together.

Next: This one will shock you. 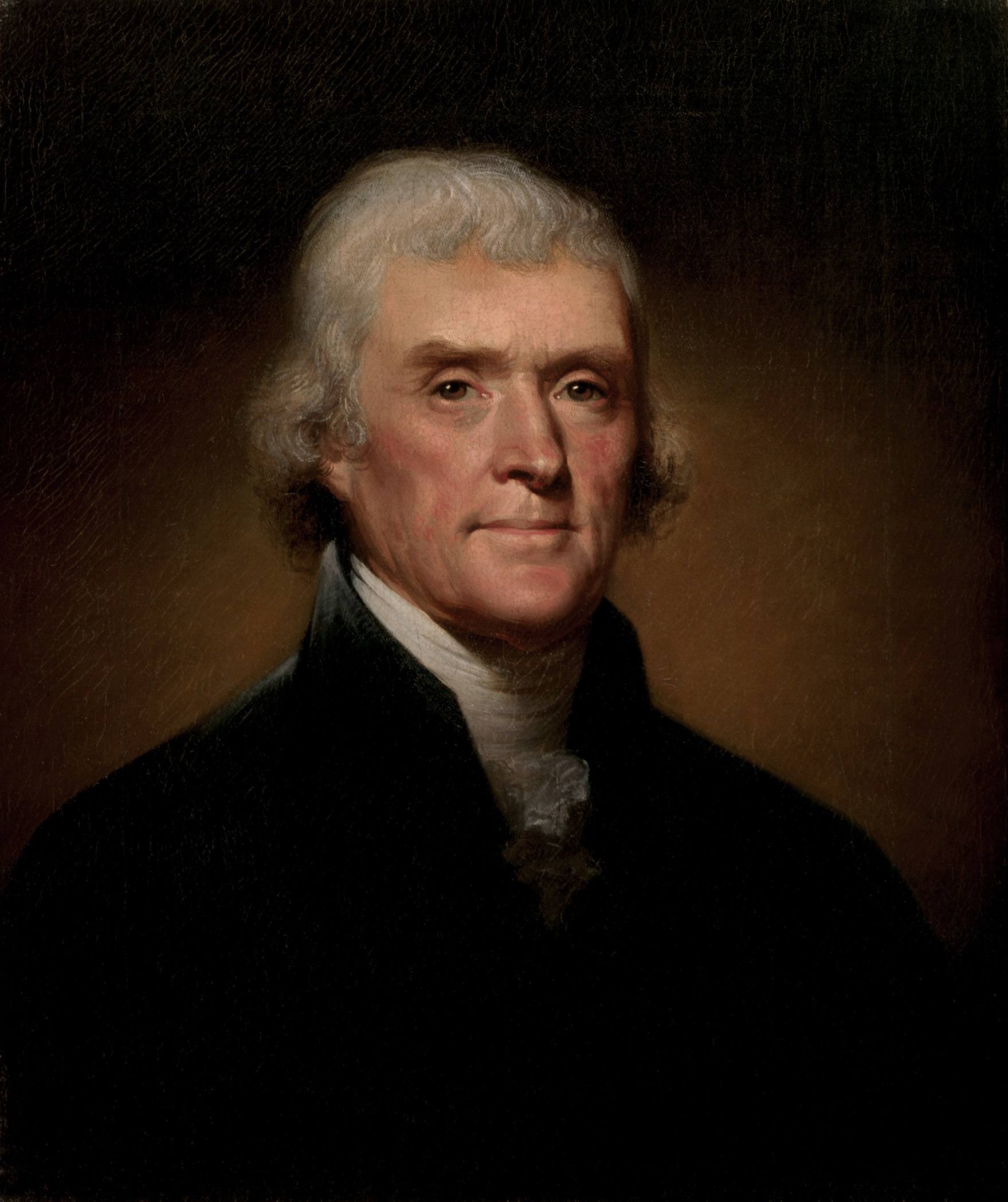 Only two of his children survived into adulthood. | Wikimedia Commons

Thomas Jefferson authored the Declaration of Independence and served two terms as the third U.S. president from 1801 to 1809, according to History. He championed individual liberty, but he owned slaves at his Virginia plantation, Monticello.

Jefferson married Martha Wayles Skelton in 1772 and took her to Monitcello, where they had six children. Only two of the six — Martha and Mary — survived into adulthood. Jefferson’s wife died from childbirth complications in 1782 and he never remarried. He did, however, according to popular belief, father six more children with Sally Hemings, one of his slaves.

Next: Another busy president 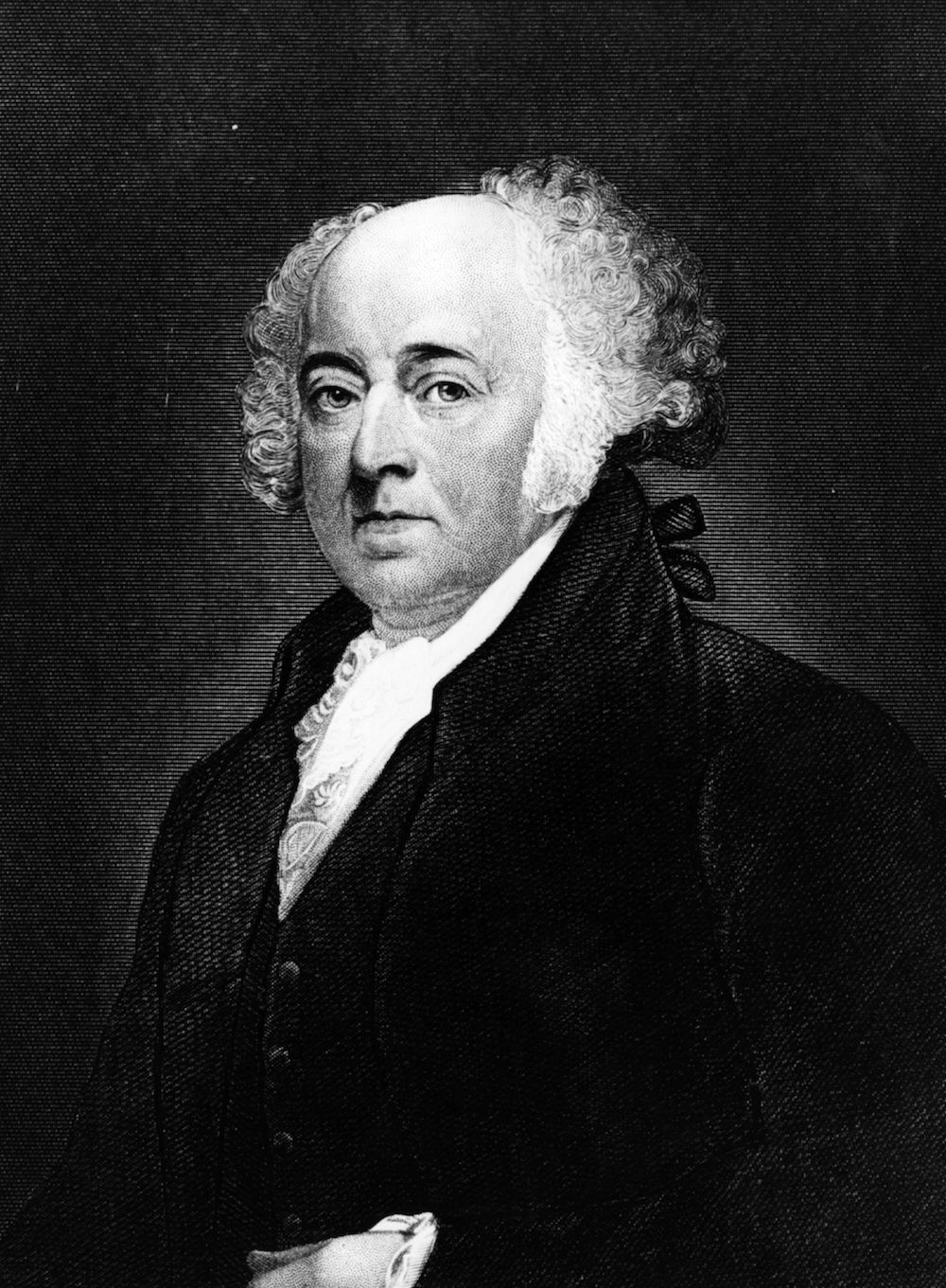 He and his wife had a close relationship. | Hulton Archive/Getty Images

John Adams led the American Revolution and helped negotiate the Treaty of Paris in 1783, which officially ended the war. He also served from 1797 to 1801 as the second U.S. president, according to History.

He married Abigail Smith in 1764 and had six children with her. The two were very close and Abigail — who was known for her intellectual prowess — had a profound influence on Adams’ career.

Next: This president died in office 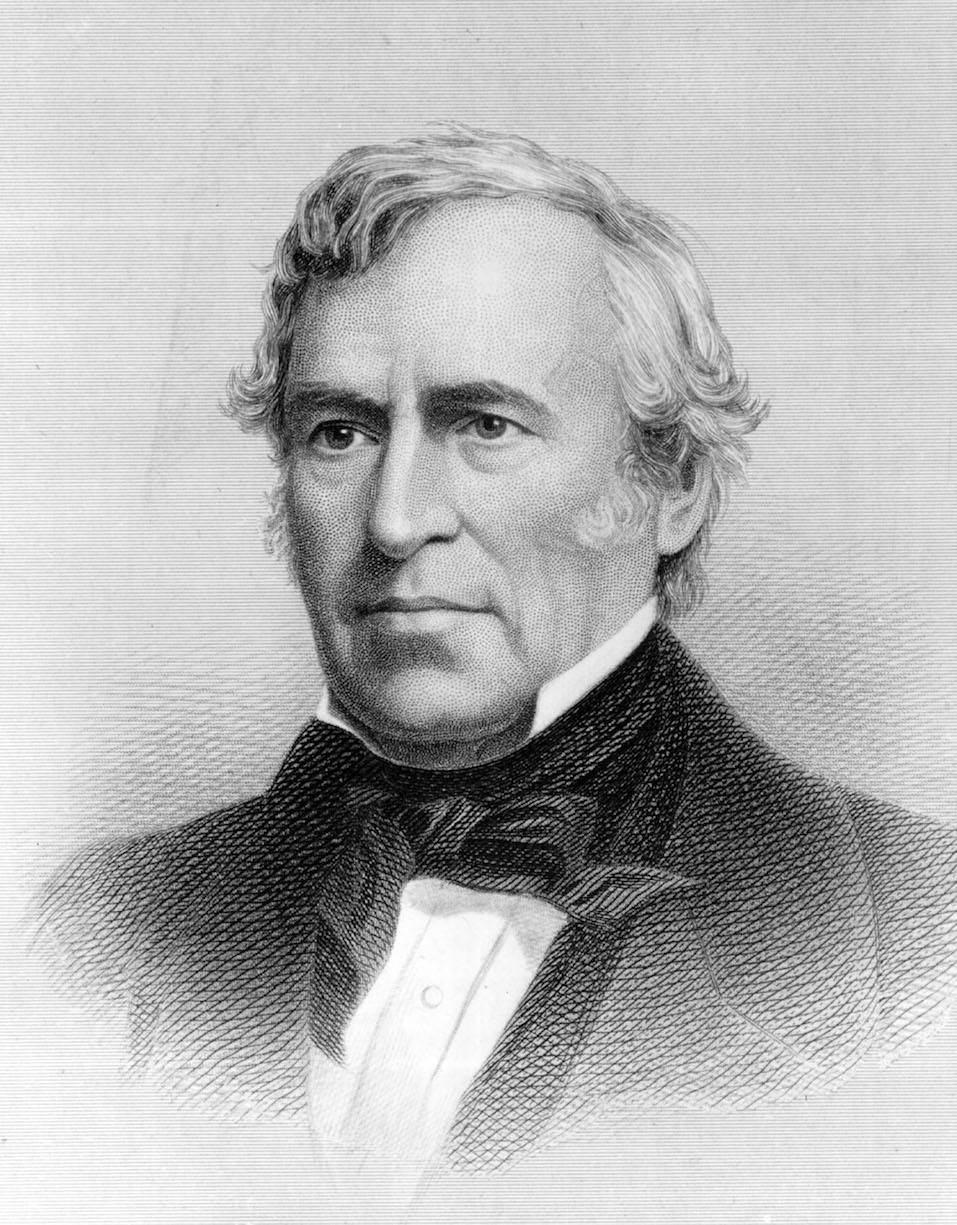 He died before the end of term. | National Archive/Getty Images

Zachary Taylor was elected president in 1848, a time when the topic of slavery divided the North and South, according to History. Taylor fell ill in 1850 and died before his term ended — and Millard Fillmore succeeded him. Taylor married Margaret Mackall Smilth in 1810 and they had six children. Sarah Knox Taylor, their second daughter, eventually married Jefferson Davis, who eventually became the president of the Confederacy.

Next: This president had eight children, but three died. 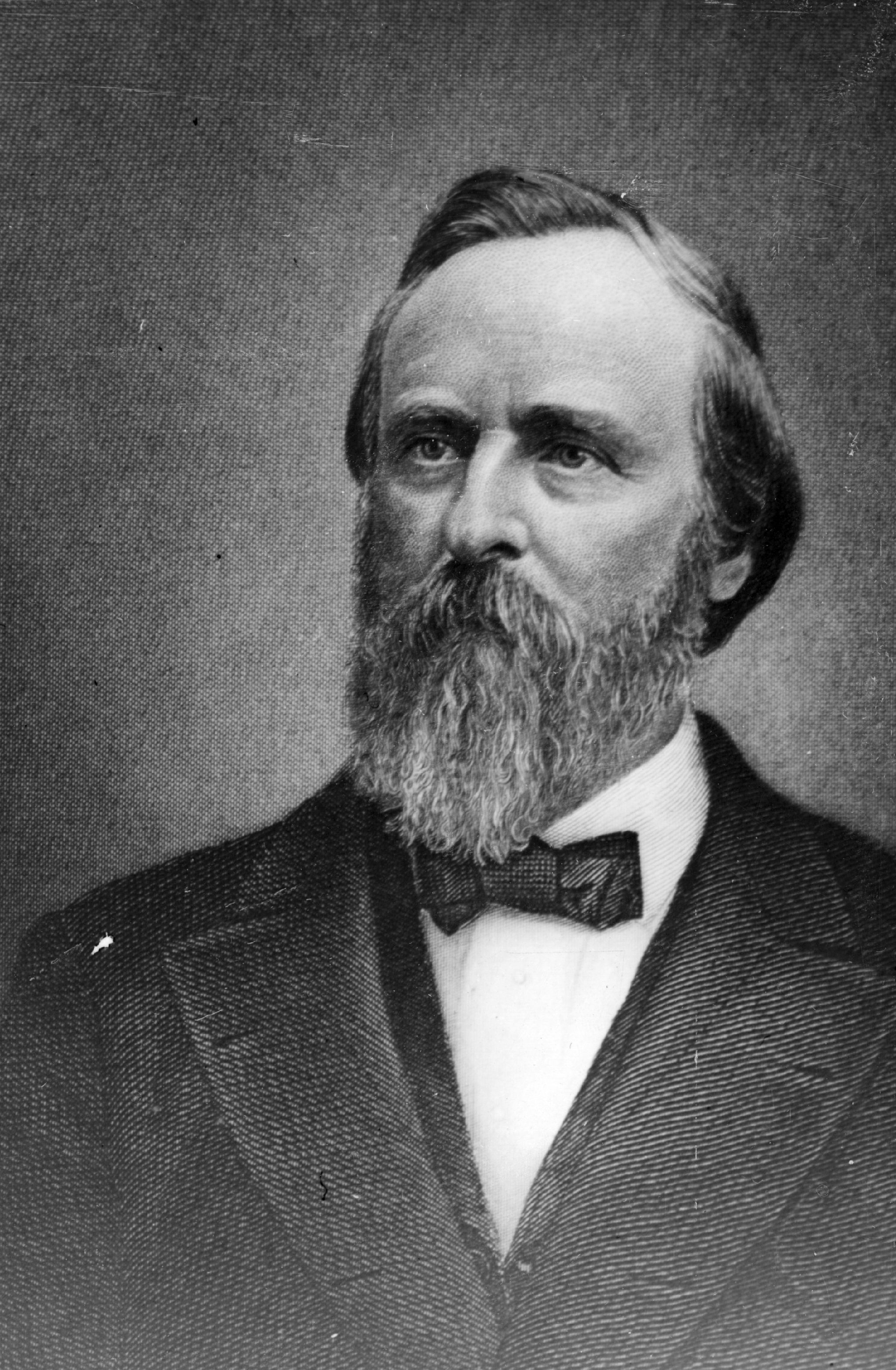 The 19th president of the United States, Rutherford B. Hayes served from 1822 to 1893. In his inaugural address, he promised to serve only one term, which he did, according to History. Hayes married Lucy Ware Webb in 1852. The first wife of a president to graduate from college, Webb attended Cincinnati’s Wesleyan Women’s College. The couple had eight children, but only five lived to be adults.

Next: A notably unfaithful president 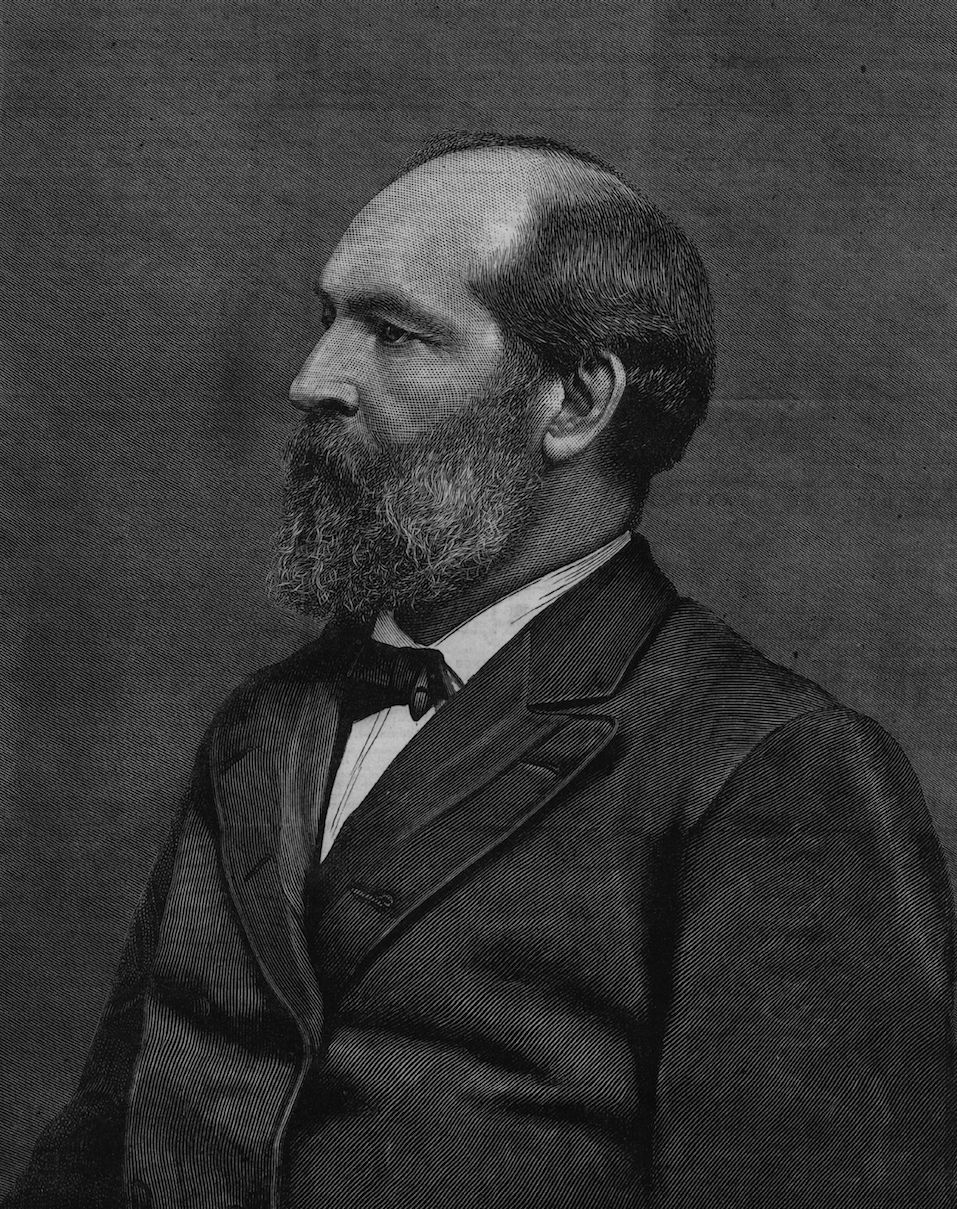 He was known for being unfaithful. | Edward Gooch/Getty Images

James Garfield took office as the 20th U.S. president in March 1881 and was assassinated in September of that same year, according to History. He married a teacher, Lucretia Rudolph, in 1858, and they had seven children. Unfortunately, Garfield was known for being unfaithful. He had a relationship with an 18-year-old New York Times reporter named Lucia Gilbert Calhoun, which he admitted to Lucretia. He also admitted to having affairs with two other women, Rebecca Selleck and Almeda Booth. Garfield broke it off with Calhoun when his wife gave him an ultimatum: get a divorce or end the affair.

Next: The actor’s offspring 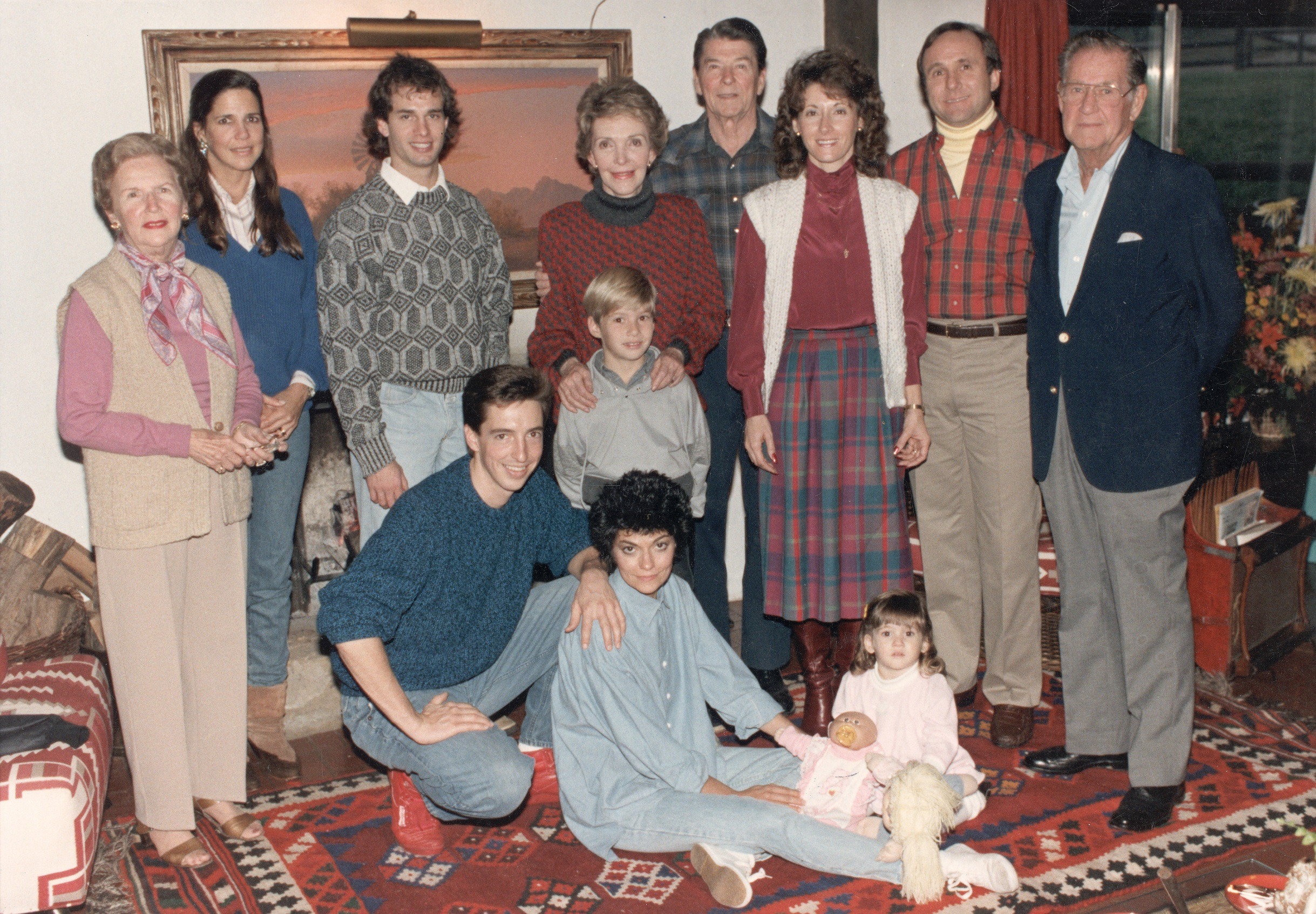 He’s the only president to get divorced. | Hulton Archive/Getty Images

Former actor and California governor Ronald Reagan was the 40th U.S. president, serving from 1981 to 1989, according to History. He survived an assassination attempt in 1981 and died from Alzheimer’s disease in 2004. He married actress Jane Wyman in 1940 and the couple had two daughters — one died as a newborn — and adopted a son. Ronald Reagan the only president in history to get divorced — he and Wyman split in 1948. He remarried in 1952, and he and actress Nancy Davis had two children.

Next: Father to none, stepfather to two 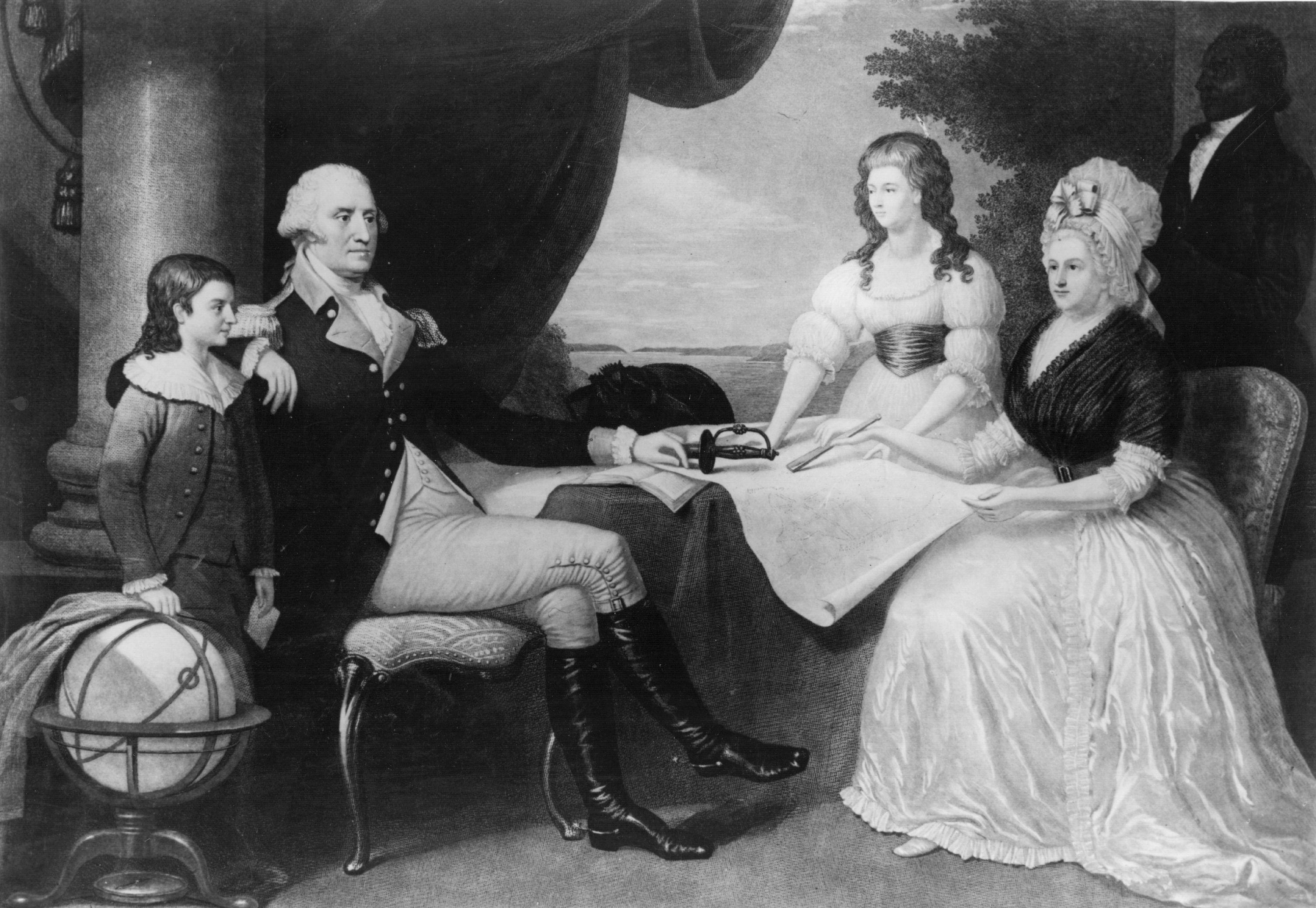 Both of his children were from his wife’s first marriage. | Hulton Archive/Getty Images

As the first President of the United States, George Washington served two terms, from 1789 to 1797. At the age of 67, he died at Mount Vernon, his plantation in Virginia. Washington married Martha Dandridge Custis in 1759. A wealthy widow, Custis had two children from her marriage. Although George and Martha never had children together, he was a loving stepfather to her two children, according to History 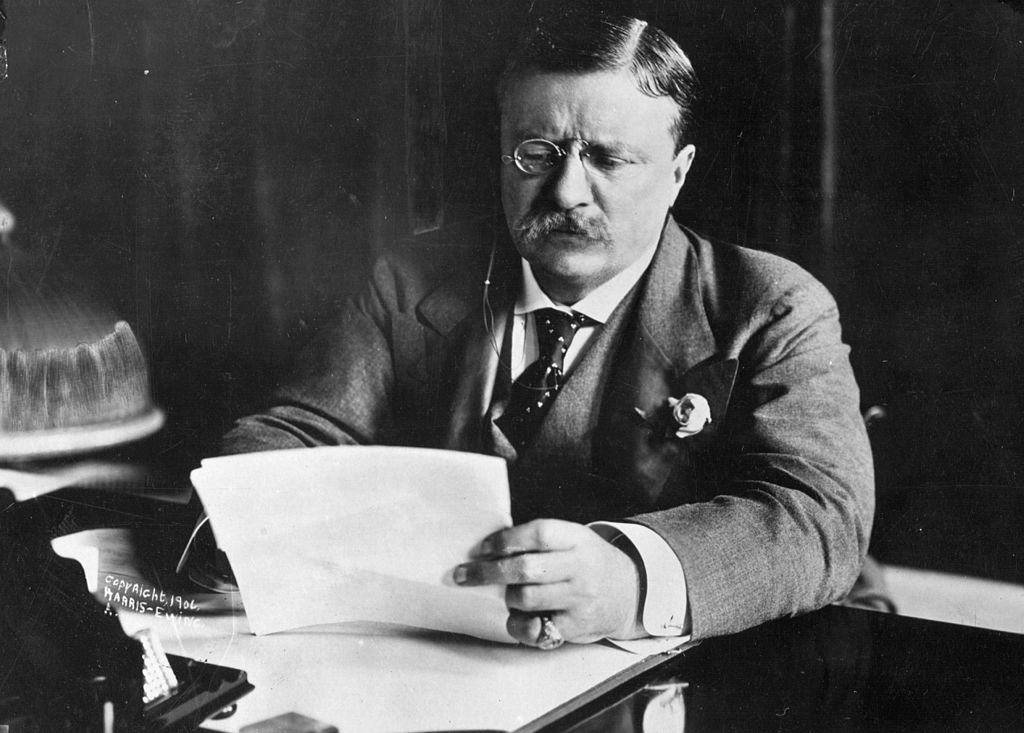 He had one child from his first marriage and five from his second. | Hulton Archive/Getty Images

In September 1901 Theodore Roosevelt was elected as the 26th president of the United States after William McKinley was assassinated. A popular president, Roosevelt was elected to serve a second term in 1904, according to History. He left the White House after his second term and went on safari in Africa, but came back for a failed attempt at running for president again in 1912. 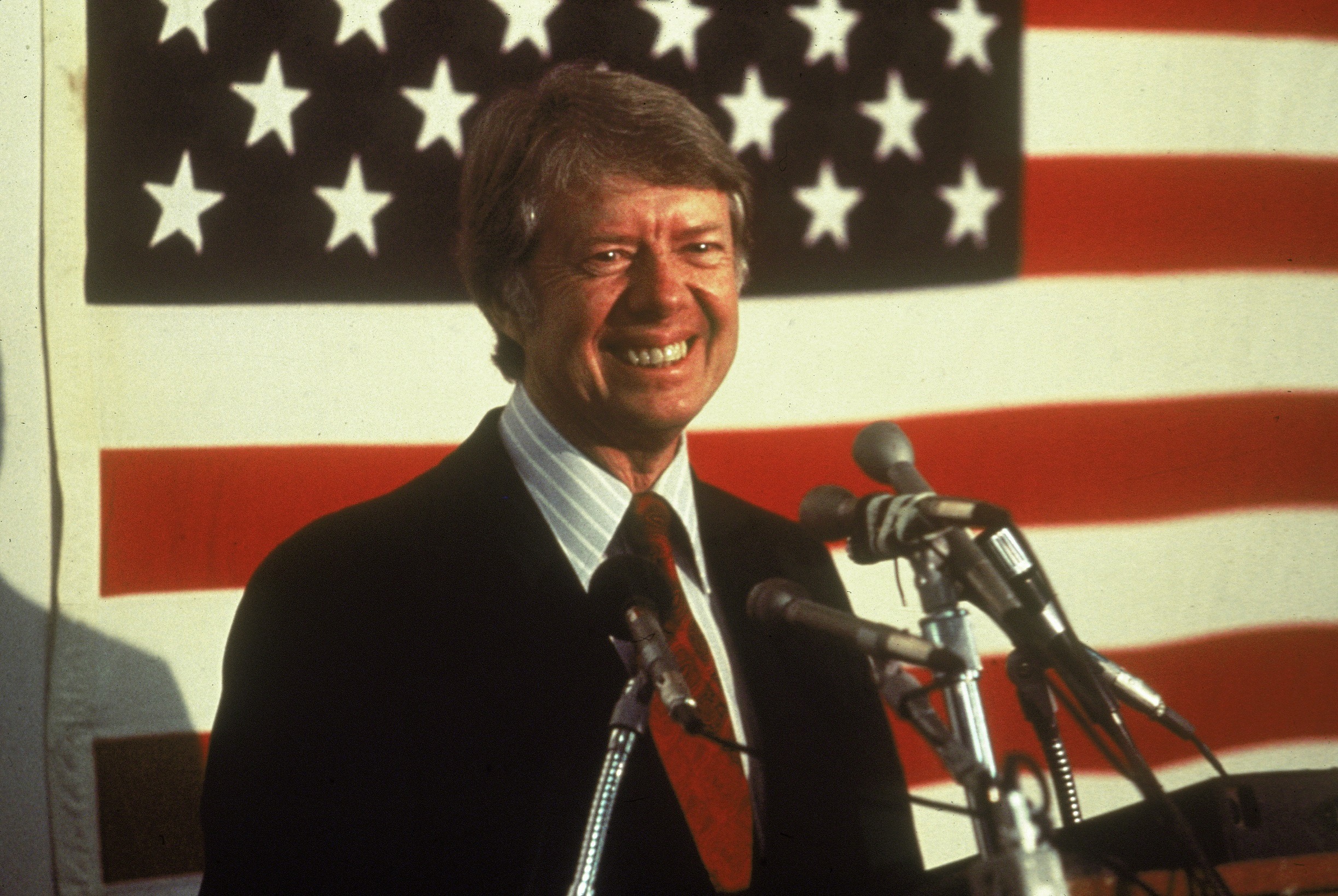 They had four children together. | Hulton Archive/Getty Images

Jimmy Carter served as the 39th president of the United States from 1977 to 1981, and he won the Nobel Peace Prize in 2002, according to Biography. He married Roslyn Smith, a childhood friend, in 1946 and they had three sons between 1947 and 1952: John William, James Earl Carter III, and Donnel Jeffery. The Carters also a daughter, Amy, who was born in 1967. 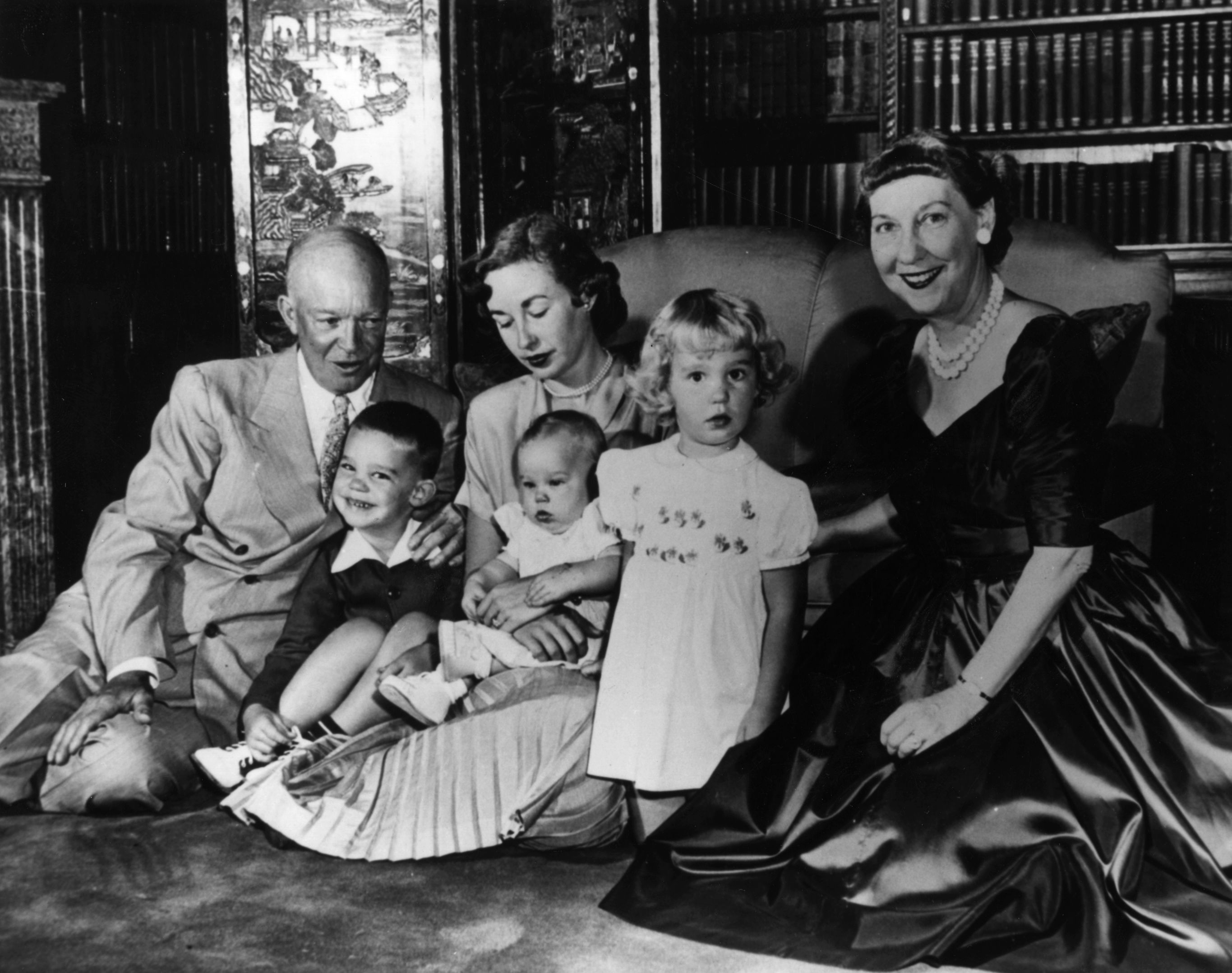 One of his sons died of scarlet fever. | Hulton Archive/Getty Images

Dwight D. Eisenhower served two terms as the President of the United States, from 1953 to 1961. According to History, he is credited with making the Social Security program stronger, creating a new Interstate Highway System and discrediting anti-Communist Senator Joseph McCarthy. He met Mamie Geneva Doud when he was serving as a second lieutenant in San Antonio, Texas, and married her in 1916. The couple had two sons, but one died of scarlet fever when he was a child. 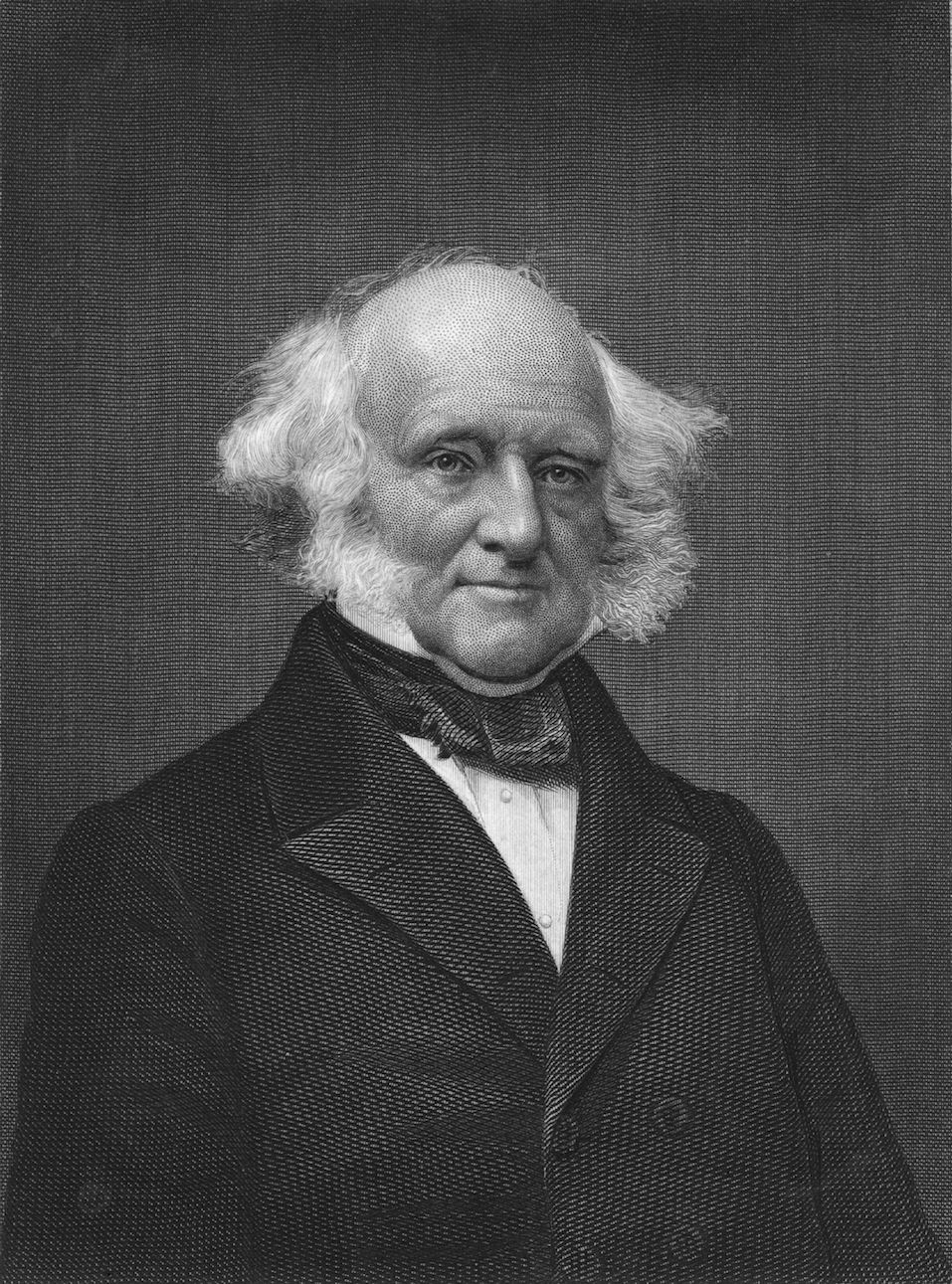 He had four kids with his cousin. | Hulton Archive/Getty Images

According to History, Martin Van Buren served as president from 1837 to 1841 — and he had the distinction of being the first president to be born a U.S. citizen as opposed to a British subject. He married Hannah Hoes, his childhood sweetheart — and cousin. They had four sons before Hannah died of tuberculosis in 1819. Van Buren never remarried.