Things Everybody Loves to Hate About Family Vacations

Family vacations never go as smoothly as you imagine. Whether you’re hopping on a plane or packing up the car for a road trip, something’s bound to go wrong — and will make for some hilarious stories down the road. Sure, we all roll our eyes and prepare for some mishaps when somebody mentions a family trip. But most of us love a few of the things that happen on family vacations.

Below, check out some things that everybody loves to hate about family vacations.

1. You always get lost at least once

Family vacations always involve some navigational difficulties. You might get lost looking for your terminal at the airport. Or, you might drive two hours in the wrong direction on dim mountain roads. In either scenario — or one somewhere in between — the realization that you’re lost always feels inevitable. Nobody likes getting lost, especially on long trips. But navigation problems are pretty common, which makes them one of the things that everybody loves to complain about when they grumble about family vacations.

2. Somebody always gets left behind

Hopefully you don’t forget them for too long. | 20th Century Fox

Few family vacations are complete without somebody getting left behind somewhere. Maybe a kid gets left behind at a rest stop, or at a shop at the airport terminal. Perhaps one parent doesn’t even notice the other’s missing once all the kids have been rounded up at a national park. Maybe a kid — or even a grandparent — wanders off at the amusement park and causes a panic among the rest of the group. Whether for 10 minutes or 2 hours, you’ll leave somebody behind on most family vacations. There’s no rational explanation. It just happens.

3. (Almost) everybody overpacks for family vacations

Loading up the car for a road trip? Cramming things into the biggest suitcase your airline will allow? Gathering your things to catch a cruise? No matter how you travel, most people overpack for family vacations. You end up packing all kinds of things that you don’t need — and then have to lug around for the rest of the trip. Bulky inflatable canoes? Giant parkas when a light sweater would do? Six pairs of unnecessary shoes? The specifics vary by family. Nonetheless, almost all family vacations involve excessive amounts of luggage, packed with stuff that nobody really needs.

4. But somebody always forgets something essential

We’ve all been Neville at some point. | Warner Bros.

Even though your family might not be able to get out of the house without two duffel bags more than what’s necessary, it’s simultaneously guaranteed that somebody’s going to forget something essential. A toothbrush is one of the most commonly forgotten items. (Fortunately, it’s also one of the easiest to replace if you’re staying at a hotel.) Smartphone chargers also get left behind — and they can get pricey to replace. Passports are another item that can cause major issues if left behind. If you’re lucky, whatever you forget will be quick and easy to replace. But unfortunately, that’s not always the case.

5. Your accommodations or destination never quite match your expectations

Whether you booked a gorgeous “vacation rental” that turned out to be a trailer, chose a “beach view” hotel room that mostly overlooks the parking lot, or opted to visit a “charming” town where there’s nothing to do, they’re all common scenarios on family vacations. Some people hate the unpredictability that comes with relying on others to make some decisions. Others relish the opportunity to see where the road takes them — and blame any mishaps on somebody else.

6. Nobody ever wants to do the same things

Even if your family vacation takes you to a destination where the activities are pretty limited, you can bet that everybody’s going to disagree about the day’s agenda. Somebody will want to go surfing while everybody else wants to head into town. Someone will want to hop in the car for a scenic drive while everyone else would prefer to hike. One kid will want to dig for crabs right in the middle of another kid’s sand castle. That’s just the way it goes on family vacations. It’s infuriating at the time — but hilarious to look back on.

Get the car checked out before you go. | Fox Searchlight

Packing up the family car for a road trip or getting a rental car at the airport? Either way, brace yourself. Many family vacations can’t get rolling until you’ve dealt with some kind of car trouble. Hopefully, the car doesn’t actually break down. However, something as minor as a flat tire can cause quite the commotion when you have your whole family along, especially if you’re missing one of the essentials to address the problem.

8. You always have to listen to music you hate 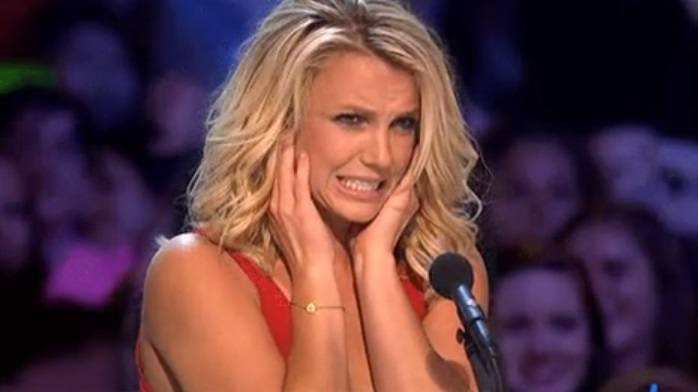 Not everyone has the same taste. | FOX

Have you ever met a family that could perfectly agree on what music to listen to in the car? We didn’t think so! One thing that people love to hate on family vacations is being forced to listen to whatever’s on the radio. That may feel like the most diplomatic way to handle it. However, it seems pretty rare that more than one or two people at a time are happy with what’s playing on the car stereo or the Bluetooth speaker.

9. Somebody always gets upset because ‘It’s not fair!’

Maybe the kids are fighting over the best pool toy or the longest marshmallow-roasting stick. Perhaps the teens are bickering over who gets control of the TV remote or the car’s stereo system. Or maybe it’s the adults, trying to blame one another for proposing the trip in the first place. Either way, “It’s not fair” becomes a familiar refrain on most family vacations. There’s never really an unbiased party to resolve the debate. Maybe it’s a good time for a life lesson about how nothing’s fair, instead?

10. You always see another family who really has it together 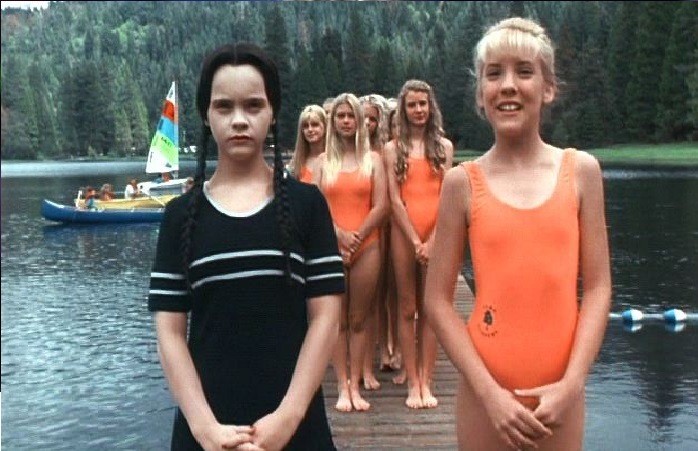 Sometimes your family is just going to be a little different. | Paramount Pictures

As if it weren’t hard enough to get everybody in one place for your family vacations, you’ll also have to deal with seeing other families looking like they’re so much better prepared, so much happier, and having so much more fun than you. You might find it easy to envy those families. But really, doesn’t it make a much better story when yours is loud, unruly, can’t agree on anything, and is probably headed the wrong direction?

11. The games you play on family vacations are always terrible

Do you have to play sports that nobody really enjoys? Maybe you get forced to participate in board games missing half of the crucial pieces? In either scenario, you can’t escape from most family vacations without playing a game that nobody really wanted to play. Just like bad icebreakers at office parties, we’ve all just come to expect terrible games on family vacations.

12. Often, somebody gets injured 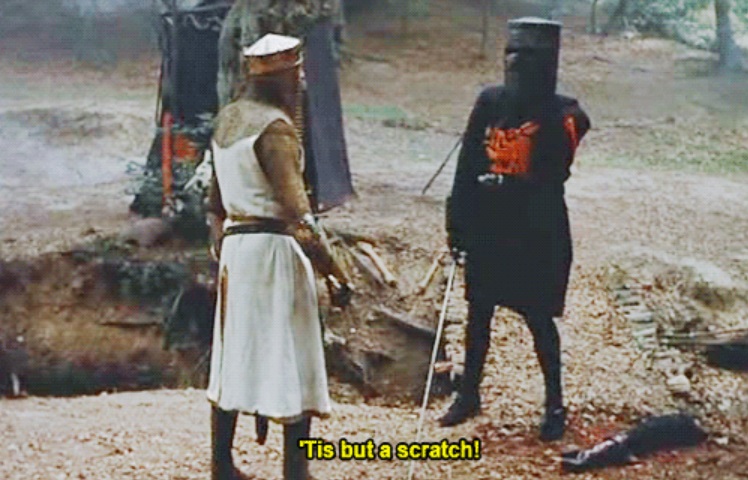 You’ll definitely need more than a first aid kit for this one. | BBC

Luckily, things don’t get dangerous too often on family vacations. However, everybody has a story about a mishap on one of theirs. Whether it’s a fish hook to the ear or a flaming marshmallow to the face, somebody incurs a minor — or not so minor — injury on almost all family vacations. Maybe Dad was right: You should always, always travel with a first aid kit within easy reach (not buried deep in one of the half-dozen suitcases stacked in the back of the car).

13. Somebody always gets airsick or carsick

Many families find it virtually impossible to go on family vacations without somebody getting sick. Whether it’s from the motion of a car or an airplane just depends on the trip. When you fly with kids, you may want to keep a change of clothes for everybody handy. (Just in case.) No matter how healthy everybody’s meals or how frequently they drink water, you can’t always stop motion sickness — which may make it one of the most hated (though inevitable) parts of family vacations.

14. You can’t prepare for everything 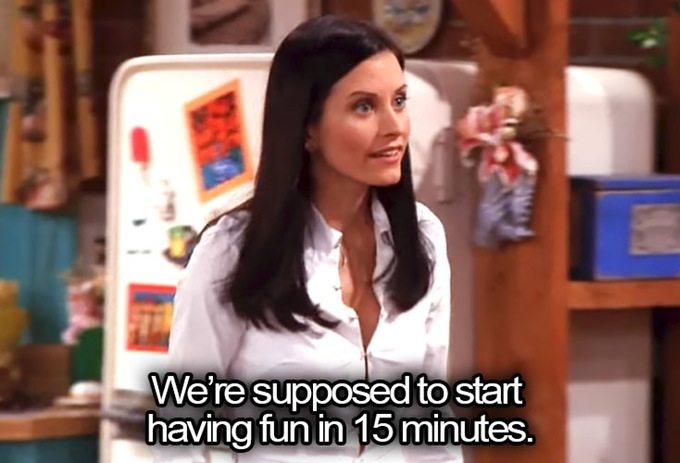 Not even Monica could plan time for fun. | NBC

People who like planning for every contingency often complain about family vacations because something unpredictable always happens. Any trip, whether you stay in a 5-star hotel or pull off the highway to set up at a sketchy campsite, poses endless possibilities. Translation? Just about anything can go wrong. You can’t prepare for all the potential disasters. But you can always try to handle them with grace. (And maybe a little bit of humor!)

15. Everybody feels miserable at one point or another

Anybody who goes on family vacations can tell you that, at some point on the trip, each person is going to feel miserable. Sometimes, everybody’s mood hits that low at the same time. Other times, half the family is grumpy while the other half is having the time of their lives. You’re basically guaranteed to have at least a few miserable hours on the trip — something that’s easier to avoid if you travel by yourself and enjoy the peace and quiet.

16. It’s the memories that matter

As any Friday Night Lights fan will tell you, the point of spending time with family — whoever you think of as family — is “making memories.” A writer for The Observer acknowledged as much, noting of family vacations, “Your job is simply to survive and tell the story.” Annmarie Kelly-Harbaugh writes that as “it turns out, it is the memory — the idea of family time — that matters. The essence of the experience is what lasts.”