With thousands of people visiting its parks every day, Disney has an important task of keeping guests safe while maintaining its “happiest place on Earth” reputation. How do they do it? By ensuring guests are on their best behavior and removing the ones that aren’t.

From using a selfie stick (page 4) to feeding the park’s furry friends (page 11), we take a look at some of the surprising things that will get guests kicked out (or worse), ahead. 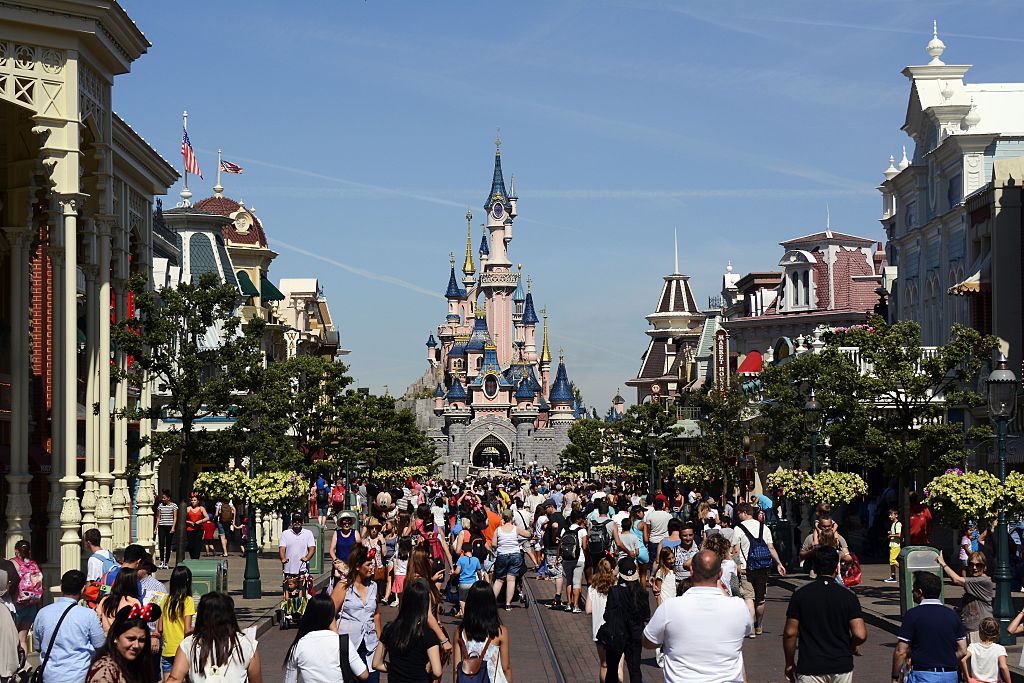 Any inappropriate behavior could result in a lifetime ban from Disney parks. | Bertrand Guaz/AFP/Getty Images

Next: Disney doesn’t want to hear your opinions. 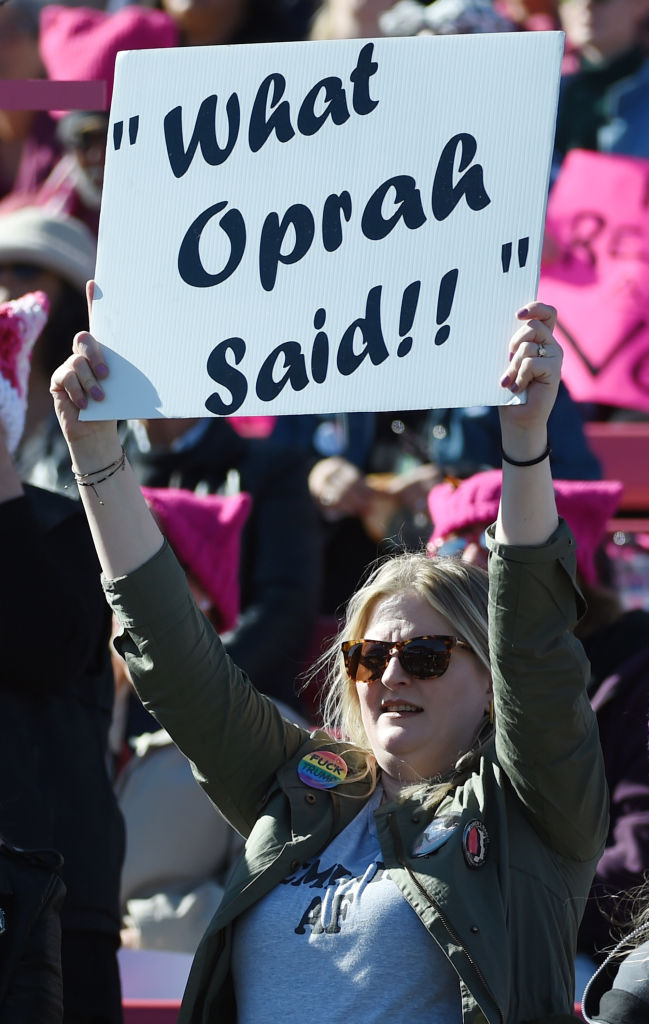 Disney wants all people to feel welcome at its parks. | Ethan Miller/Getty Images

Another type of behavior Disney doesn’t tolerate? Protesting and public speaking. Dubbed the happiest place on Earth, Disneyland wouldn’t be all that happy if guests were marching around with signs and yelling out various chants that adhere to their beliefs.

One of the parks’ main goals is to preserve the magic of Disney and create a space where all feel welcome. And, protesting doesn’t help the company in its mission.

If you’re caught protesting at Disneyland or Walt Disney World (or any of its other parks, for that matter), Mickey’s security team will escort you out of the park, and may even ban you for life.

Next: You’ll go to Disney jail for this. 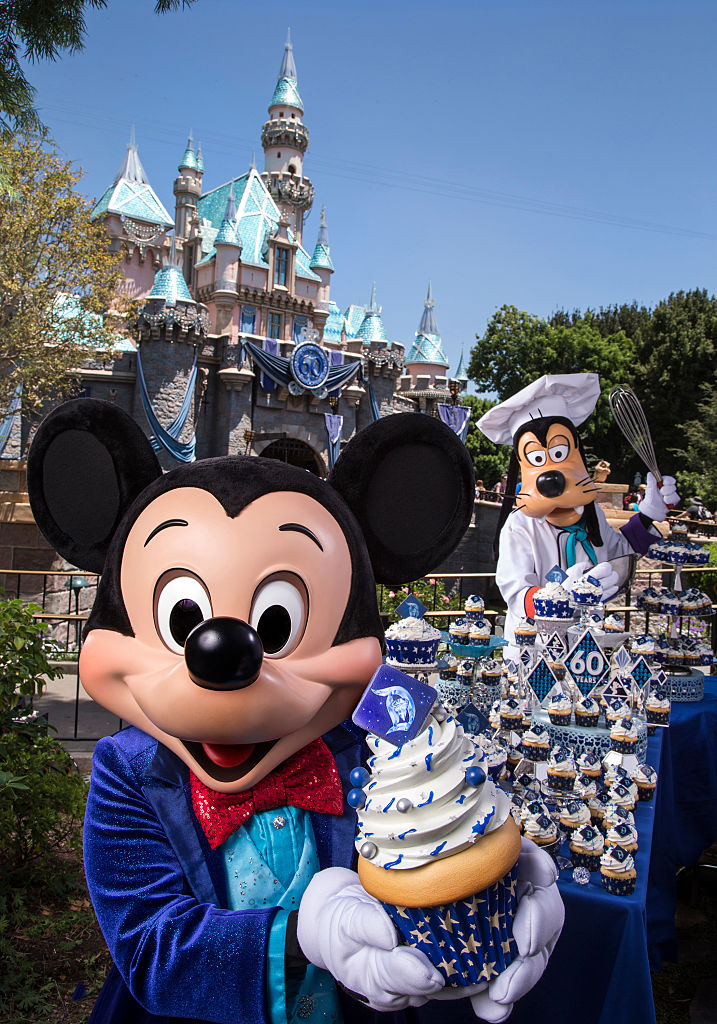 This one should be obvious. | Paul Hiffmeyer/Getty Images

Punching a Disney character may be an obvious “what not to do,” but there are still people who have done it (facepalm). If you punch a Disney character at Disneyland, Walt Disney World, or any other parks and resorts, you will not only be removed from the premises, but most-likely banned for life. And, depending on the severity of the situation, you could be handcuffed and charged for the incident, too.

When you punch a Disney character, anything is possible … so, don’t do it.

Next: One of the most surprising (and, stupid) ways to get yourself kicked out of the park. 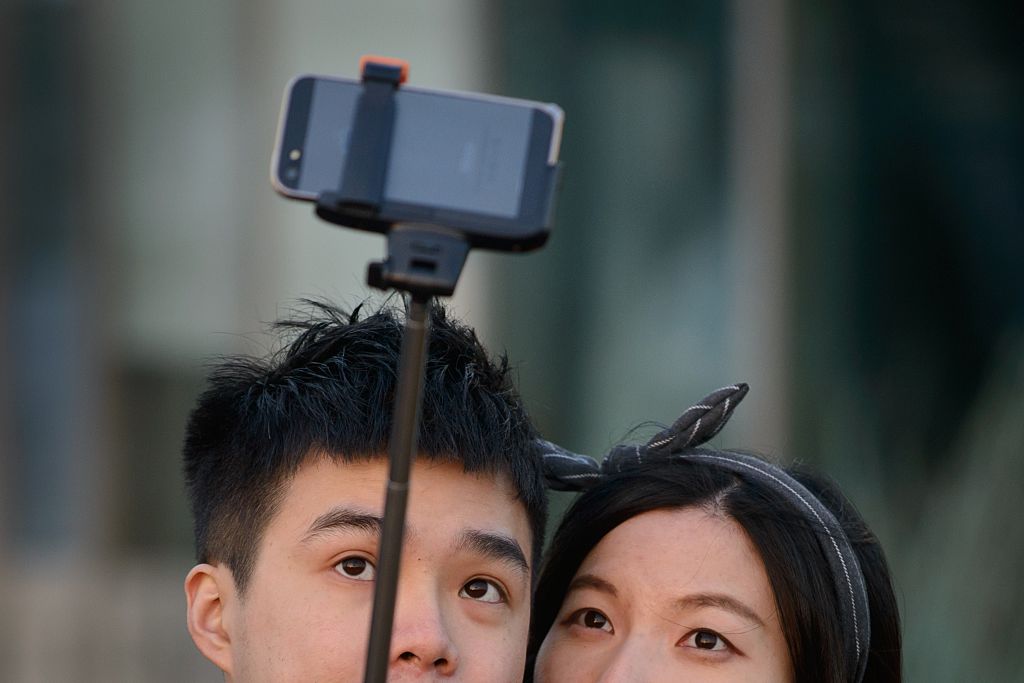 While using a selfie stick at Disneyland probably won’t get you banned for life, it could still get you kicked out of the park. Disney has instructed its cast members to remove all selfie sticks from its parks (guests can pick up their sticks at the front of the park upon leaving for the day), and failure to comply with said rules can result in a security escort out of the park.

Next: You’re only allowed to do this if a ride breaks down.

5. Getting off a ride … during the ride 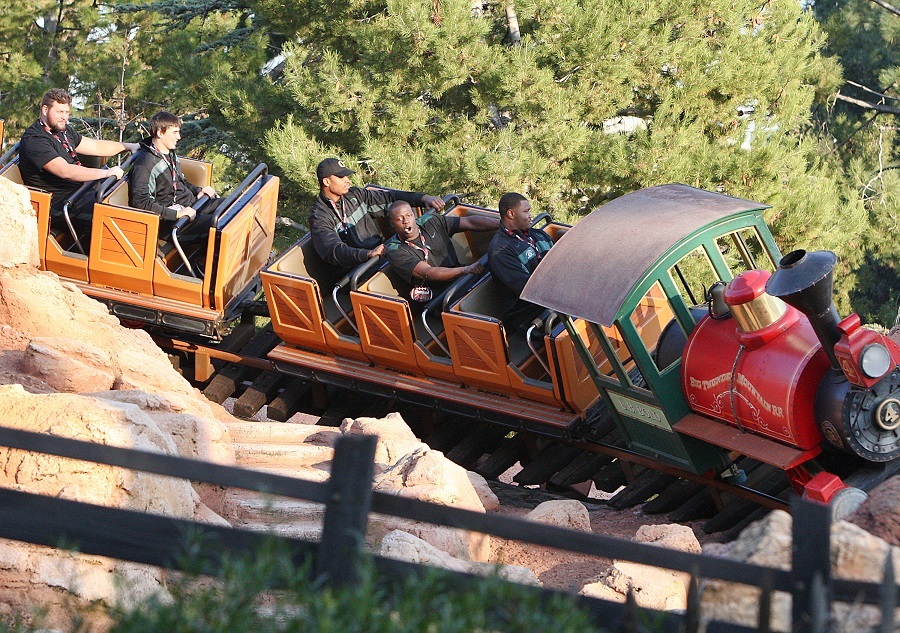 It’s not worth the risk for several reasons. | Paul Hiffmeyer/Getty Images

Have you ever wondered what it would be like to wander around Haunted Mansion, Pirates of the Caribbean, or other popular Disneyland rides? Well, keep wondering because doing so will get you kicked out of — and possibly banned from — the park.

Disney attractions have special sensors in place that can detect an escape artist from the moment their feet touch the ground. So, even if you were willing to risk it, you wouldn’t get that far.

Next: Disney doesn’t care how hot the weather is … 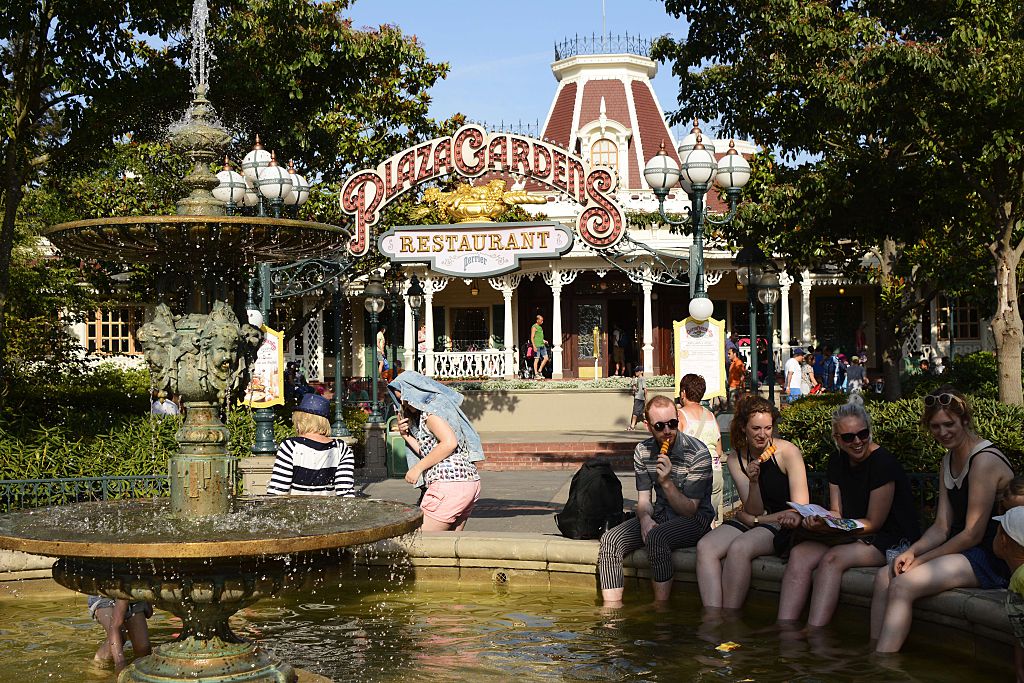 Stay out of the fountains. | Bertrand Guaz/AFP/Getty Images

A trip to Disneyland or Walt Disney World in the summer can be hot, sticky, sweaty — you name it. But, that’s not an excuse to take a dip in one of the parks’ fountains, lakes, ponds, moats, and any other body of water that isn’t a resort pool. Going for a swim in a restricted body of water at a Disney park will get you kicked out with a life ban.

Next: A silly, but easy way to get removed from the park. 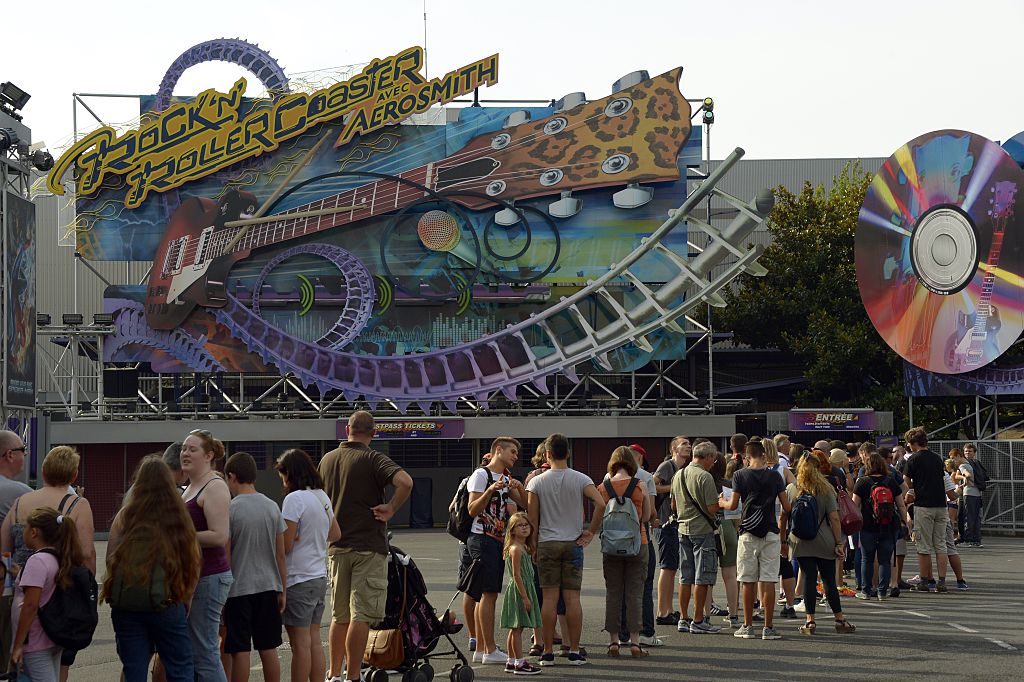 Cutting in line is not cool when you’re five and it’s not cool at Disneyland, either. In fact, Disney has a strict policy against skipping the line and if a guest is caught in the act, they will be removed from the property immediately.

Next: Did you know Disneyland has secret underground tunnels? 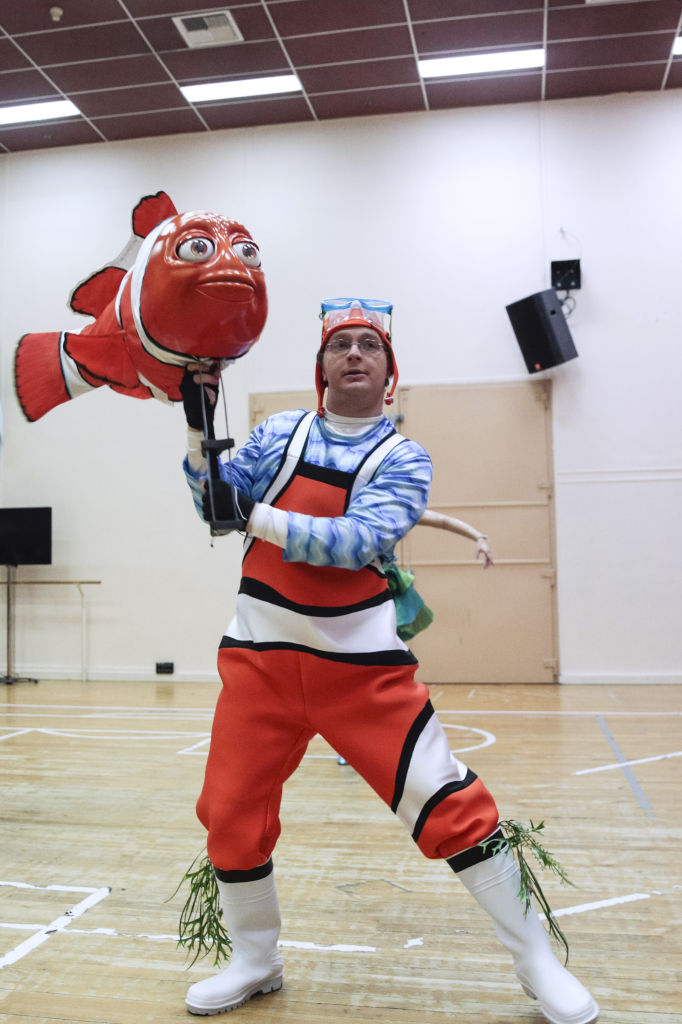 Another big (and obvious) no-no? Trespassing. We’re not just talking guests trying to sneak in after hours — though, we’re sure that happens — we’re also talking about wandering through areas that are marked “cast members only.”

Disney understands that mistakes happen, but guests who wander too far (i.e. into the underground tunnels of Disneyland) could face a life ban.

Next: Disney does not take this violation lightly. 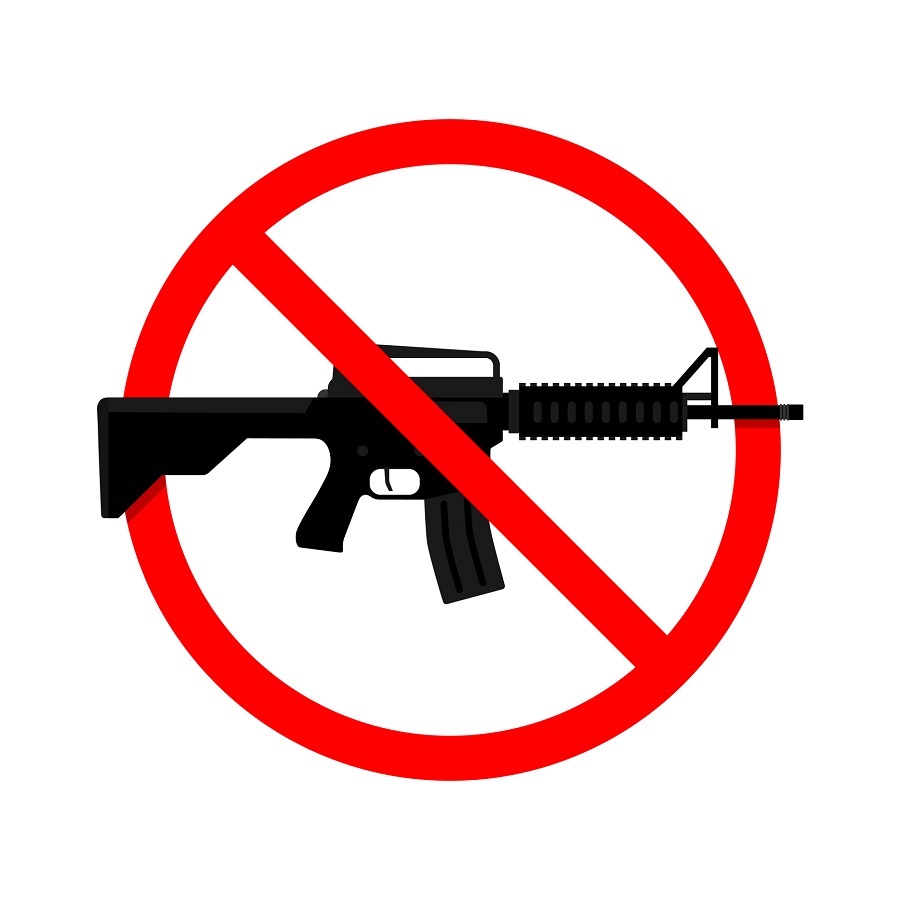 Another obvious — but, important — reason to get kicked out of the park? Carrying a weapon. Disney does not tolerate weapons in its parks, or anything that threatens the safety of its guests and employees. Those caught trying to bring a weapon into one of Disney’s parks will get kicked out and possibly banned for life.

Next: In this situation, the guest is never right. 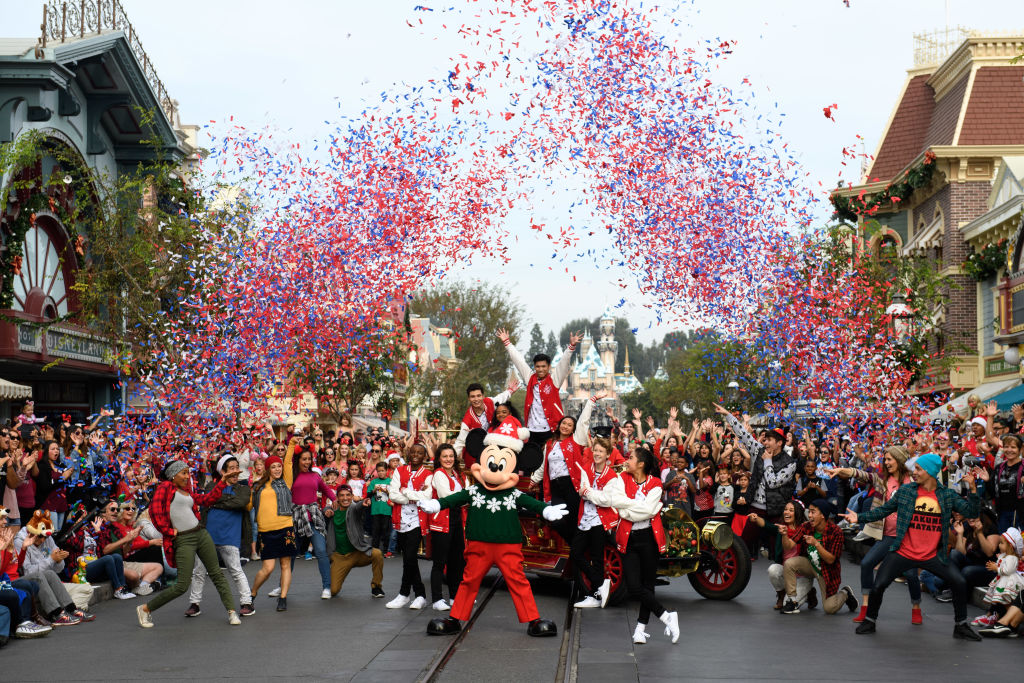 A fast way to get kicked out of Disneyland and Walt Disney World? Harassing a cast member. Whether it’s a Disney princes or a cashier at Pizza Planet, Disney does not tolerate harassment of any kind — especially towards its employees — and will remove perpetrators immediately.

Next: This would be a terrible reason to get kicked out. 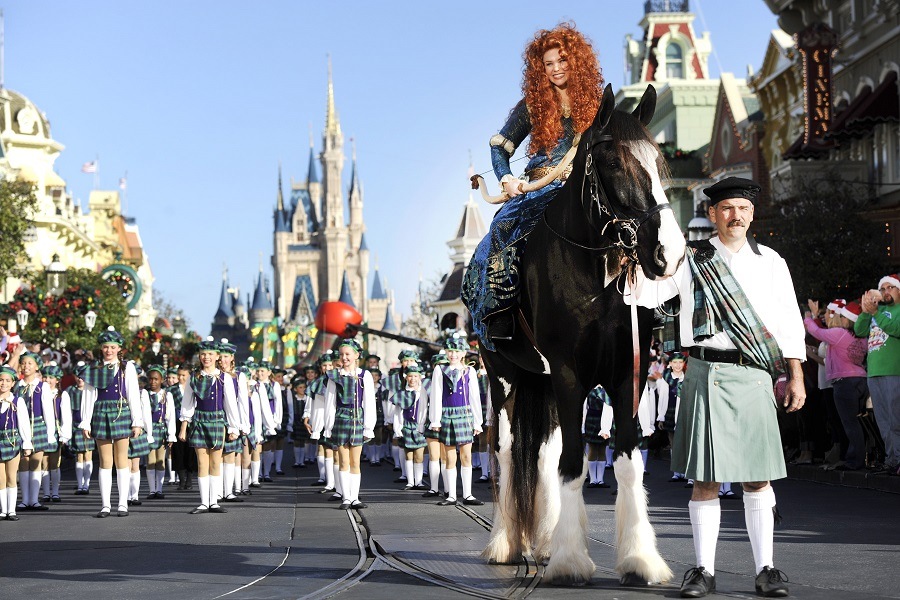 It’s against the rules to feed animals at a Disney park. | Mark Ashman/Getty Images

From cats to ducks, many animals call Disneyland and Walt Disney World home. That said, it is against Disney rules to feed them. Those who violate this policy — and do not cooperate with cast members — can be shown the door.

Next: Many of us are guilty of doing this. 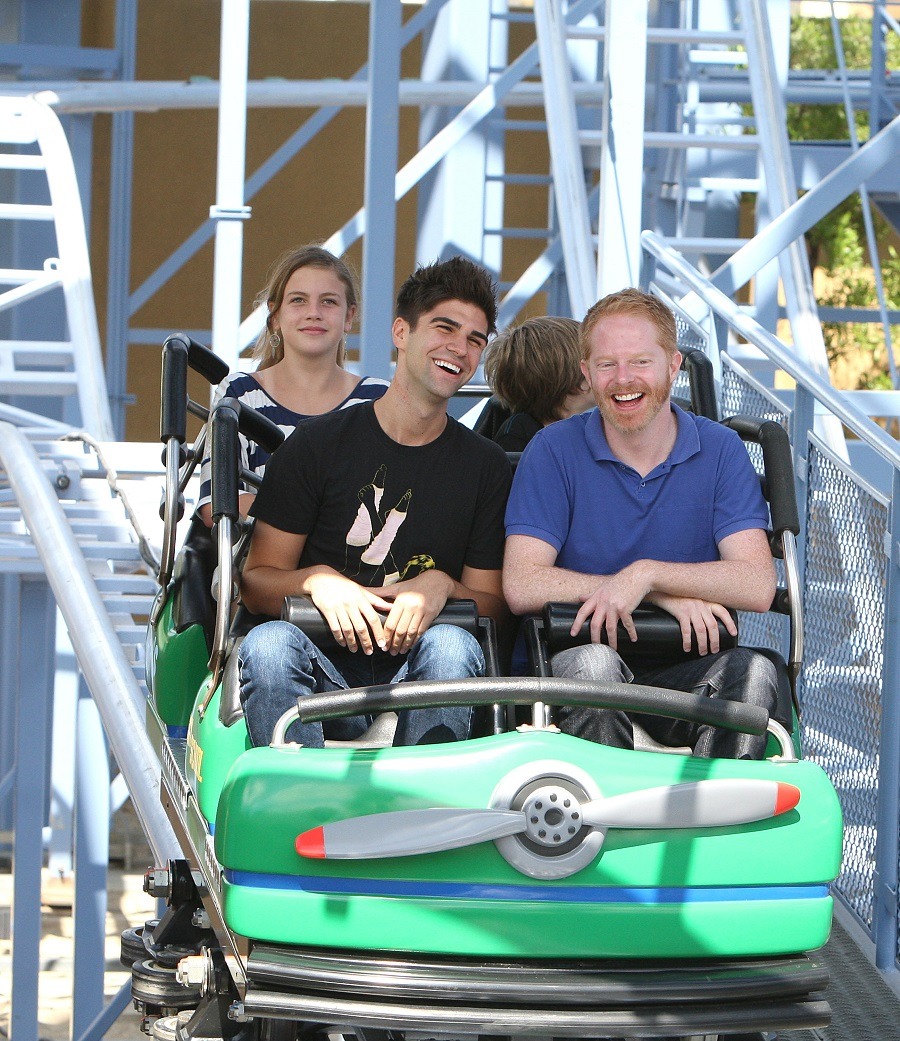 While making funny faces for ride cameras is acceptable, inappropriate gestures are not. Most of the time, cast members will delete the image before it appears on the screen, but if they feel it is too inappropriate, they can also have violators removed.

Next: A different kind of trespassing 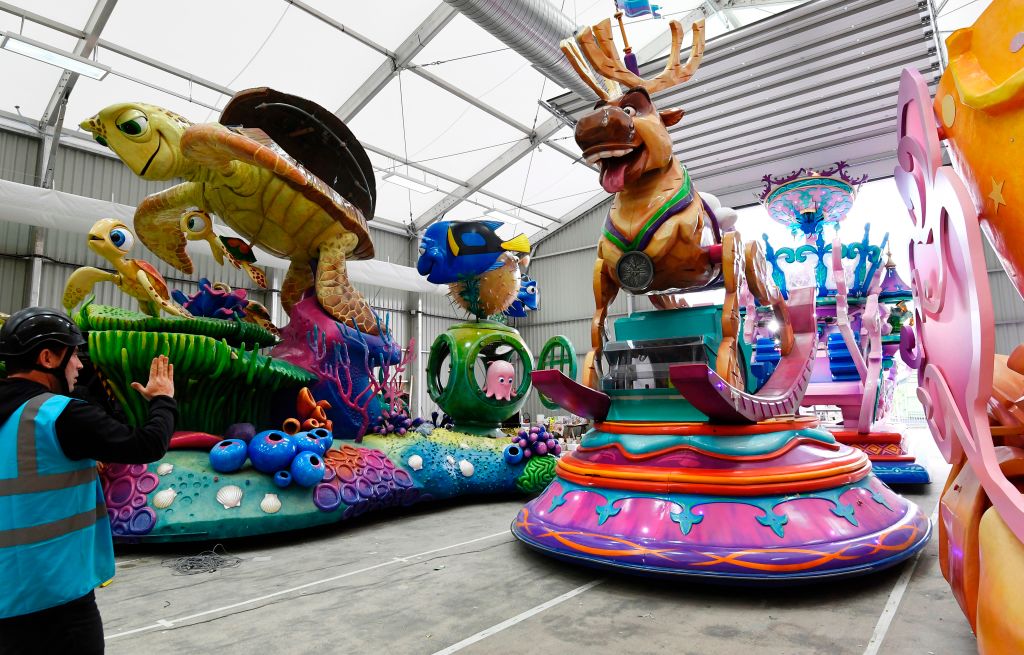 Trespassing through “cast members only” areas is strictly prohibited. This includes sneaking backstage. We know behind the scenes of Disneyland and Walt Disney World is intriguing, but uncovering the magic is not worth it. Sneaking backstage can result in removal of the parks and a possible life ban.

Next: The hilarious way one comedy writer got himself banned for life.

14. Having a tea party with ride animatronics

This editor got himself banned after some animatronics antics. | Mac Faulkner via Twitter

One of the most bizarre — and hilarious — ways to get kicked out and banned for life? Having a tea party with Disney robots (aka, animatronics). Mac Faulkner, editor at The Chive once took it upon himself to perform some ridiculous acts while visiting Disneyland. One of which entailed trespassing under the ropes at Space Mountain and having a tea party with the animatronics.

Next: An A-list actress was banned from Disneyland for doing this. 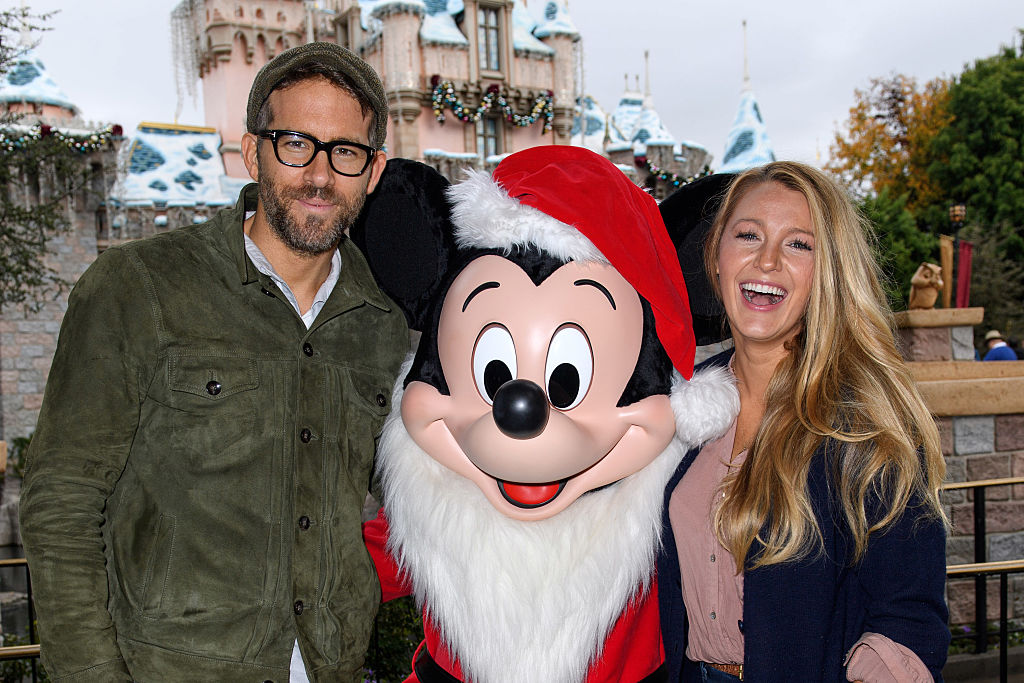 Could Blake Lively be the reason Disneyland stopped using hand stamps for re-entry? Probably not, but it would make for a great story. The A-list actress once tried to fake a returning guest hand stamp — she used hair spray to lift it off her friend’s hand and transfer it to her own — and was banned for an entire year.