Things You Should Never Say at a Wine Tasting

Regardless of whether you’re an experienced oenophile or a wine scene newbie, attending wine tasting events is the perfect way to get a feel for what you love and what you don’t. You can try a wide range of different vinos without buying a whole bottle and wine tastings aren’t typically uber expensive, so it’s a win-win.

Wine tasting etiquette is easy to grasp — and you don’t need to learn a whole new language to talk about different wines. That said, there are certain things you should refrain from saying at a wine tasting event. It’s not important that you come off as an expert, but you really don’t want to look like a jackass. Find out now what not to say at your next wine tasting event. 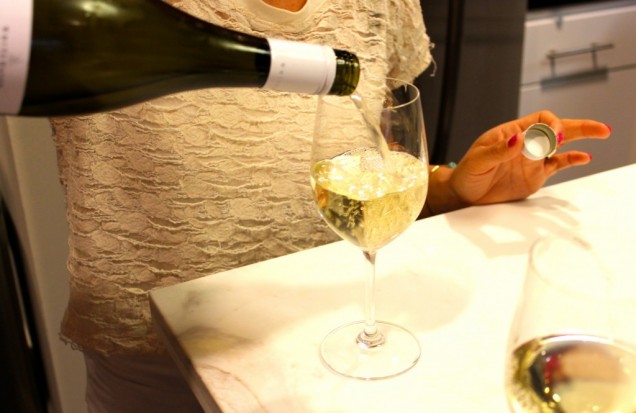 This is a very common misconception about wine. | iStock.com

According to Blog Your Wine, saying that you don’t drink wines with screw caps is a common faux pas at wine tastings. And it’s one that makes you look like you know absolutely nothing about wine. Screw-top wine bottles are perfectly fine — in fact, because corks deteriorate over time, some wineries actually reseal their bottles with screw caps instead of corks when it’s time to recork older vintages.

2. “Which type of barrel was this wine aged in?”

You’re bound to give the wrong impression with that comment. | iStock.com

First, says Blog Your Wine, who cares what kind of barrel the wine was aged in? If it tastes great, it really doesn’t matter. Saying this will make you sound pretentious. FYI, different types of oaks can affect wines. For instance, American oak typically gives a more intense flavor than French oak, which provides a more subtle taste.

Next: A totally idiotic question

3. “What percentage malo is this wine?”

This question is so nitpicky. | Zmurciuk_k/iStock/Getty Images

Malolactic fermentation, known as malo, turns the tart malic acid in wine into a softer-tasting, lactic acid. Winemakers decide what results they want, then tailor the degrees of malo they put a wine through to match that, according to Blog Your Wine. They typically put red wine through a full malo, but they put white wines through different levels of malo depending on their preferences. Don’t ask how much malo the wine went through — the server won’t know, and you don’t need to know.

Next: Dry vs. tannic wines

Make sure you understand the lingo before you use it. | Trader Joe’s

Before you say something big like this, make sure you really know what you’re talking about. In the world of wine, dry means the opposite of sweet, according to Thrillist. If you’re experiencing dry mouth after you drink wine, it’s likely the tannins in it that you don’t like. If you say you don’t like dry wines, chances are you’re saying you don’t like tannic wines.

Next: Tasting the terroir

5. “I can taste the terroir in this wine”

Terroir actually has little to do with flavor. | iStock.com/TSchon

Say this and your wine server will assume either you just learned the word “terroir” or that you just read about it in a wine magazine, reports Blog Your Wine. By definition, terroir is the environmental factors that affect the grapes. Sure, it plays a part in the grapes’ flavor, but once those grapes get to the winery, the winemaker is in control. You’re not really tasting the terroir, you’re tasting the winemaker’s preferences.

Next: Don’t be a snob

Your server will know you’re a wine novice. | iStock.com/FotoCuisinette

Say this and your wine server might actually burst out laughing. Don’t rule out wines that aren’t 90+ points — you could be missing out on some great vinos with prices to match. Instead, explore all types of wines and read reviews from different sources. And always keep in mind that wine is such a personal experience that if someone thinks one is a 90+ bottle you might not.

7. “Rieslings are too sweet”

Not all Rieslings are the same. | iStock.com

If you’ve been shying away from Reislings because you think they’re too sweet, you’ve been missing some of the best wines out there. There is a wide array of dry Reislings on the market that people often overlook. For example, some fantastic dry Reislings come from Alsace, France; South Australia; and Germany. Dry Reislings have higher levels of alcohol — 11% and above — than the sweeter ones, which typically contain 9%.

Next: Champagne taste on a beer budget

Ouch — say this and your server will know you just fell off a turnip truck. Yes, you can get a $10 bottle of Champagne, but no … you don’t want to drink it.

If you want something bubbly for cheap, consider a bottle of Prosecco instead. Prosecco differs from Champagne because it is from Italy, not France, according to Wine Folly. It’s fruity and flowery — and affordable. You can snag a good bottle of Prosecco for between $12 and $14 — sometimes even less.

7. “I’ll buy the bottle with the cool label”

This tactic is superficial at best. | iStock.com

Don’t. Say. This. It sounds absolutely silly. First, remember that however much the winemaker spent on that fancy label was money he or she didn’t spend on making the wine, according to Thrillist. Second, the label is no indication of what’s inside the bottle. Instead of looking at the label’s design, pay more attention to the information that’s on it, such as the year and whether it’s estate grown.

8. “What is Robert Parker’s rating for this wine?”

The only thing that should matter to you is the taste. | iStock.com

Who cares what rating a wine has? If you like it, you like it. Robert Parker stopped reviewing wine a while back, according to Thrillist, so it’s time to retire questions about his ratings. Ask what rating Parker assigned to your wine and you’ll seem … not too bright.

Anyone can enjoy a rosé. | Ekaterina Molchanova/iStock/Getty Images

Oh heck no, don’t say this. First, it’s sexist. Second, it’s uneducated. Third, it’s not true. Today’s Rosés are not yesterday’s yucky White Zinfandels. In fact, nowadays, due to its popularity, there is often a shortage of Rosés during summer, according to Forbes. Made around the world, Rosés use a wide variety of grapes — winemakers keep the skins in contact with the juice for a short period, which provides the color.

Next: This is just rude behavior.

Everyone has different tastes. | iStock/Getty Images

Please — if you don’t like a wine at a tasting, don’t crow about it. It’s rude, and no one really wants to hear your opinion while forming his or her own about the wine. Keep your opinion to yourself at a wine tasting. If someone asks you for your opinion, give it by all means, but try to phrase it as nicely as possible if it’s negative.

You should at least try it. | iStock.com

Don’t say this — or anything else that starts with “I don’t drink.” You’re at a wine tasting, for heaven’s sake. You’re there to find out what you like and what you don’t. Try everything! You have nothing to lose except maybe some cash when you buy a bottle of something you thought you’d never like. Be open at a wine tasting event — you never know what you’ll find.

Some people prefer to just taste the wine, not to drink it. | ViewApart/iStock/Getty Images

If you say this, you’ll basically show everyone you’ve never been to a tasting before. Experienced wine fans know that if they drink too much they won’t be able to taste as many wines — or evaluate them properly, according to The California Wine Club. Wine etiquette dictates that it’s perfectly fine to spit your wine into the bucket — that’s what it’s for. Don’t comment on someone doing it or you’ll sound like a total neophyte.

Don’t ever — no matter how tempting it is — grab the bottle and pour it yourself. First, it’s against the law, according to the Nectar Tasting Room website. Second, it’s pretty darn rude. Calm down and wait for your server — the wine won’t run out and he or she will get back to you in good time.

Next: Please sir, I want more.

Get ready to pay if you want something fancier. | iStock.com

By asking this, you’re basically saying the wine you’ve been served isn’t the good stuff. That’s not nice. Instead, suggests WineEnthusiast, ask if the place has any reserve or library wines available beyond the flight you’ve been served. Keep in mind, though, that if you ask that, you should probably be ready to buy a bottle of “the good stuff.”

Next: Something you can ask.

It’s perfectly fine to ask where the grapes come from. | iStock.com/don51

Having read about 14 things you shouldn’t say, this might sound like one, too. But it’s actually fine to ask where the grapes were grown if you’re interested. Sometimes a winery will grow its own grapes right at the spot you’re having a tasting. If the label has the phrase “estate bottle” on it, chances are the grapes were grown nearby.

Read more: 9 Ways to Save Money on Wine and Spirits This Holiday Season