This Photo Proves Liam Hemsworth Has the Cutest Dog in Hollywood Noon is living the private-jet lifestyle with Zendaya. | Zendaya via Instagram

Zendaya’s dog, Noon, makes my Lady and the Tramp dreams come true. Noon is the spitting image of Tramp. All black, Zendaya schnauzer is identical to his Disney counterpart. Noon even gets to take rides on private jets, shown on Zendaya’s Instagram. These two pups are cuter together. | Ciara via Instagram

Ciara’s dogs, Tyson and Texas, are the cutest doggie duo. Texas is younger than Tyson, joining Ciara’s family in Dec. 2014, according to Ciara’s Instagram. He looks like a teddy bear with curly golden hair. Tyson and Texas are even cuter together because they’re the same breed and have names that start with the letter “T.” Does it get any cuter than that? We don’t think so.

Hint: This dog is her “first born baby.” 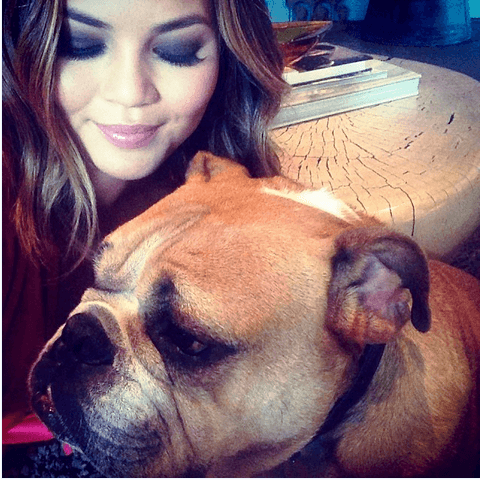 Chrissy Teigen’s bulldog, Puddy, brings bulldogs to a whole new level of cute. Puddy is Teigen’s “first born baby,” she tweeted. After a health scare in Nov. 2017, Puddy is back at home with his family. Puddy’s made red carpet appearances with his mom, stealing the show in the process. Puddy’s also been welcoming to Teigen and husband, John Legend’s, new addition to the family, Pippa. The newest additions to actor Justin Hartley’s family are 12-year-old Memphis and 6-year-old Gracie, according to People. Since rescuing Memphis and Gracie, Hartley is head over heels. And it’s easy to see why. The dogs are adorable and even more so when they’re floating in the pool or sleeping.

Hint: This dog’s lived in the most famous house in the country. 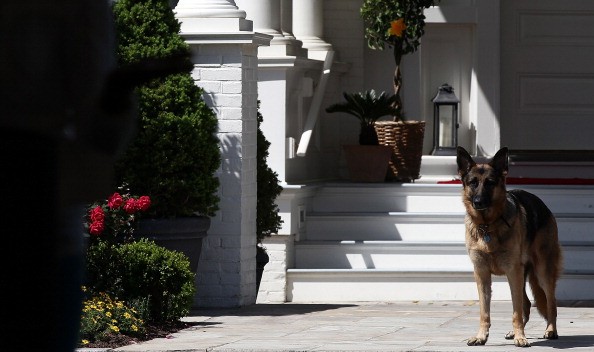 Move over Barack Obama. There’s a new BFF in town. Joe Biden’s dog, Champ, steals the show during an InStyle photo shoot. It’s nearly impossible not to melt when you see Biden embrace his dog. English Bulldog, Winston, is arguably the cutest member of the Jonas family. Since joining the family in 2010, Winston’s made quite a home for himself. Going on walks as a puppy with dad, Joe, Winston is a ball of wrinkles. Winston, even has fans who run an Instagram account dedicated to Winston. Lola is just one of Kristen Bell’s dogs who she treats like children. | Kristen Bell via Instagram

Lola and Mr. Shakes are rescue puppies. Their mom, actress Kristen Bell, believes in adopting dogs. “There are so many wonderful pets in shelters around the country ready and waiting to find a home,” Bell told People via email. Her dogs, Lola and Mr. Shakes, are like children to Bell. “To me, they’re just kids I didn’t birth,” she said. The dogs fluffy tails and perky ears earn them a spot among the cutest dogs in Hollywood.

Hint: This actor’s dog is the most well-behaved puppy. The actor is a pit bull advocate. | Josh Hutcherson via Instagram

Actor Josh Hutcherson has one of the cutest dogs ever. His rescue dog, a gray pitbull named Driver, is the spitting image of a perfect puppy. “He’s literally the most well-behaved dog you have ever met,” Hutcherson told E! News. “For a puppy, he doesn’t chew things up, he’s already almost housebroken and he’s only 8 weeks old. He’s incredible. He’s doing great,” Hutcherson added.

Hint: This dog’s mom is one of the most popular Twitter users. 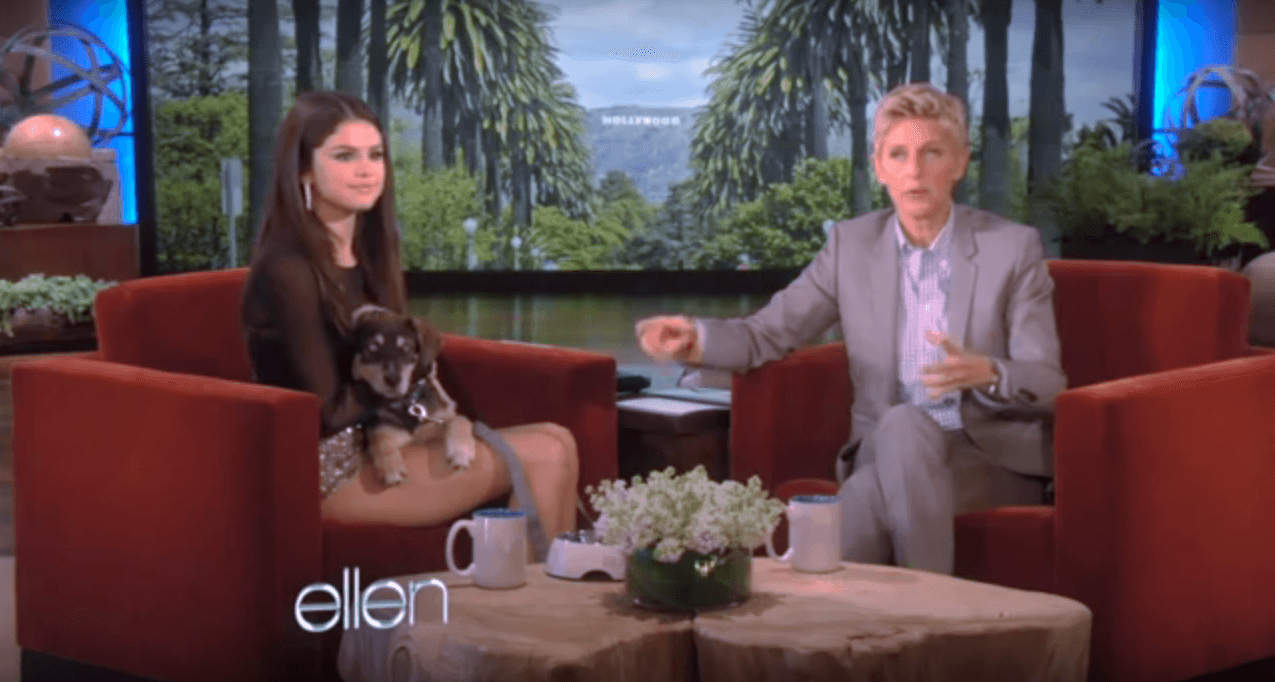 She saw Baylor at an animal shelter and had to have him. | The Ellen Show via YouTube

While dating Justin Bieber, the first time around, he and Selena make a visit to a shelter, where she falls in love with Baylor. “We went to a shelter just for fun…and we saw this adorable, adorable puppy,” Gomez said in an interview with Canadian entertainment show eTalk, according to People. “I literally felt like he said my name. So, I had to have him,” she added. The husky mix, Baylor, has piercing blue eyes no one can turn away from.

Hint: This celebrity calls her dog her boyfriend. Her two dogs love each other. | Olivia Wilde via Instagram

Actress Olivia Wilde’s dog, Paco has white fur with brown spots making him adorable. Not only does he have spots but markings on his ears make him even cuter. Wilde calls Paco her boyfriend, according to the Daily Mail. What makes him more lovable is how well he gets along with Wilde’s new dog, Elvis, UsWeekly says.

Hint: This dog lives with lots of other animals. She’s known for her love of animals. | Miley Cyrus via Instagram

Singer Miley Cyrus is known for her love of animals. She’s got dogs, cats, and even a pig running around her house, according to Teen Vogue. It’s her dog, Milky, who has our attention. The dog’s name speaks to his shiny white coat of hair. His markings make him even cuter. Milky has a brown spot underneath his left eye and a pink and brown nose.

Hint: This dog gets carried by his mom. She spends a lot of time with her dog. | Rachel Bilson via Instagram

Actress Rachel Bilson’s dog, Thurman Murman, is a shaggy haired dog who spends lots of time with Rachel. Bilson takes her dog on walks and to Home Depot. Bilson can be be seen carrying her dog like a baby, PopSugar says. The best part is Thurman Murman doesn’t seem to mind.

Hint: This dog’s owner appears on an album cover. John Mayer had an emotional visit with a dog psychic. | John Mayer via Instagram

The cutest celebrity dog is Moose, John Mayer’s black lab. Moose makes an appearance on John Mayer’s album cover for Paradise Valley. What makes the dog even cuter is the love John has for his dog. When a fan asks Mayer what the one question is he would ask his dog, Mayer’s answer is heartwarming. “I had a dog psychic (not my idea) ask him if he was upset with me that I couldn’t be with him all the time and “his” answer made me cry,” Mayer tweeted.

Hint: This dog’s relationship with her owner is heartwarming. Her dog had the nickname “bear.” | Chelsea Handler via Instagram

Tammy, Chelsea Handler’s rescue dog is one of the cutest puppies I’ve ever seen. Handler affectionately calls Tammy “bear,” because she resembles a bear with her brown, fluffy fur. Sadly, Tammy passed away in Aug. 2017 after fighting renal failure, according to an Instagram post of Chelsea Handler’s.

Hint: This dog is almost as big as her owner. Liam Hemsworth’s dog Dora is lovably adorable. Hemsworth’s Instagram feed is loaded with photos of him and Dora. Miley Cyrus, Liam’s then-girlfriend, now fianceé, helped him find a dog to adopt, according to InStyle.

Read more: 5 Ways Having a Pet Improves Your Life