This Stadium Has the Most Insane Views in the World

Whether it’s the home of a football team, soccer club, or tennis pros, sports arenas around the world aren’t just impressive, they’re breathtaking. From stadiums set amidst majestic mountains to those perched along a rugged coastline, you don’t have to be a sports fan in order to appreciate some of the most stunning venues the world has to offer.

From Seattle to Switzerland and everything in between, we’re counting down to the No. 1 stadium in the world with the most insane views. And trust us, they’re well worth the visit.

Home to the San Francisco Giants, AT&T Park is located on the water’s edge of San Francisco Bay. Giants fan or not, spectators looking to catch a glimpse of the area’s iconic bridge may want to head to the stadium for some stellar views of the Bay Bridge.

Next: This South Africa stadium is a real stunner.

Cape Town is one of South Africa’s most prized locations, and for good reason. There’s one place within the city, though, that you may have never heard of — The Newlands Cricket Ground, which is home to the Cape Cobras cricket team. The arena itself sits in the shadows of Table Mountain and Devil’s Peak, and the views are incredible.

Next: This field is set in one of the most popular countries for travel right now.

In the town of Vestmannaevjar lies Hásteinsvöllur, one of the coolest stadiums in the world. Why? Because it sits under the watchful eye of Eldfell volcano. But don’t worry, it’s not currently active, which is good news for the football teams who play there.

Next: The elevation of this field may surprise you.

Located under an hour from the Mile High City of Denver, Boulder is home to the University of Colorado’s main campus, which means that the football players require some serious lung capacity. The elevation at Folsom Field is 5,360 feet, making it over a mile above sea level.

In addition to being the third highest college football stadium in the country, Folsom Field’s real wow factor comes in the form of the staggering flatiron mountains that serve as the stadium’s backdrop.

Next: The claim to fame for the next stadium is its location to a very famous landmark.

Constructed at the base of the island’s famous rock, Victoria Stadium’s claim to fame is its up-close-and-personal proximity to the Rock of Gibraltar. While the venue mostly hosts football games, the stadium does serve as a multi-purpose spot which also hosts events such as the annual Gibraltar Music Festival.

Next: The land of the kiwis

Located just five minutes from downtown, the Queenstown Events Centre is a multi-purpose sports stadium set in a stunning spot with sweeping views. Those views, for the most part, are thanks to the stadium’s location at the base of the Remarkables mountain range. 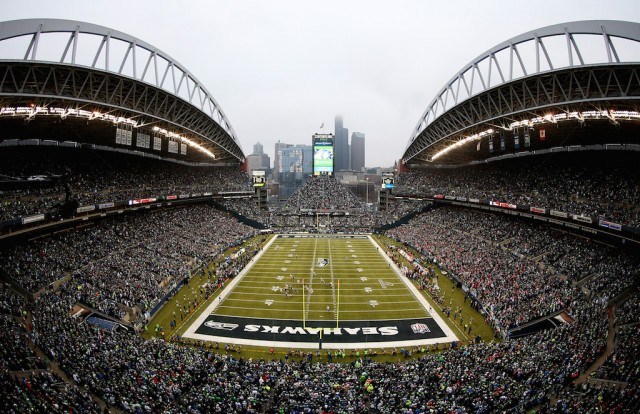 Seats in this stadium will get you a great view of the Seattle skyline. | Tom Pennington/Getty Images

Seattle’s skyline is certainly something to talk about. And for fans who frequent Seahawks’ games, it’s a view they’re accustomed to. In fact, according to CenturyLink Field’s website, “Wide concourses offer outstanding views of the Seattle skyline, Safeco Field, the Cascades and Mt. Rainier, Puget Sound and the Olympic Mountains.” Pretty impressive, indeed.

Next: These islands may not ring a bell, but they’re stunning.

Perched on the shores of the Atlantic Ocean, Eidi Stadium is home to the Faroe Islands’ semi-professional football team. Located in the town of Eidi, the stadium offers spectators little standing room between the field and the ocean, making out-of-bounds balls fairly impossible to retrieve.

Switzerland is hardly lacking on the majestic mountain front, so it’s no surprise that Gstaad’s Roy Emerson Arena makes the list. According the the ATP World Tour website, the tennis stadium, which was named after the the Australian tennis great, has “one of the most spectacular backdrops of any ATP World Tour tournaments …”

Next: This race track stuns with twists and turns through the countryside.

Tough name, beautiful Formula One race track. Serving as the venue of choice for professional drivers and enthusiasts alike, the Circuit de Spa-Francorchamps hosts the annual Belgium Grand Prix. Set in the sprawling country hillsides of Belgium, the track serve up a stunning, yet challenging course.

Next: Seascapes abound at this waterfront stadium.

With coastal views of the Grenadine Islands serving as the backdrop, the Arnos Vale Ground is home to the Windward Islands cricket team. Seeing as the stadium is located in Kingstown, Saint Vincent, there’s certainly no shortage of stunning seascapes and sweeping views, to boot.

Next: This place really has it all.

Croatia’s Stadium Kantrida is set in an environment chock-full of natural beauty. One one side, there’s the stunning sea shore. On the other, staggering cliffs on the coast of the Adriatic Sea. With its gorgeous surroundings, one thing’s for sure: the HNK Rijeka football club is one lucky team to be able to call this their home turf.

One glimpse of the Monte-Carlo Country Club, and you’ll be more than motivated to improve your tennis game. Set along the French Riviera, Monaco is well-known as a ridiculously beautiful gem, which is the very reason this one makes the list. As for professional matches, the club is the site of the annual Monte-Carlo Rolex Masters.

Next: A very famous mountain range serves as the backdrop for this stadium.

The HPCA Stadium in Dharamsala is the perfect sports venue for anyone who (like me) goes to sporting events more for the experience than to actually watch the game, because really, how can you watch a match with that backdrop?! #dharamsala #hpcastadium #himalayas #expatadventures #landscape

The Himachal Pradesh Cricket Association is one lucky bunch of players, because they get to call this stadium their home field. The HPCA Stadium is located in the city of Dharamshala, which is best known as the home of the Dalai Lama of Tibet. Of course, the most epic aspect of the HPCA Stadium is its sweeping views of the snow-capped Himalayan mountains.

Next: And now, for the most gorgeous stadium in the world …

The setting for todays game. 2000 metres above sea level. Only way up is by cable car. Cant beat it. #ottmarhitzfeldstadium #switzerland

Overlooking the iconic Swiss Alps, the breathtakingly beautiful Ottmar Hitzfeld Stadium is only accessible by cable car. Set among some of the most magical mountain views in the world, this stadium is truly a stunner worth visiting.

Read more: Add These Stadiums to Your Bucket List If You’re an NFL Fan