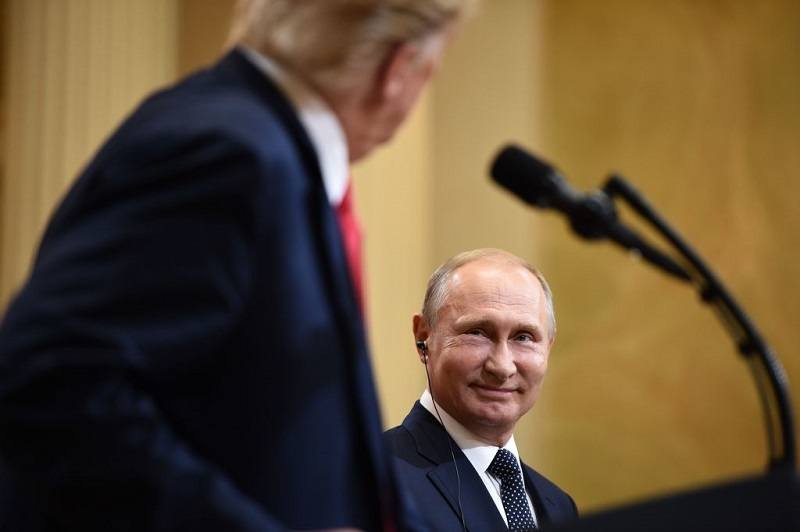 The summit in Helsinki turned out to be a great day for Vladimir Putin. | Brendan Smialowski/AFP/Getty Images

When Donald Trump announced he would meet with Russia’s Vladimir Putin on July 16, most people asked one question: Why?

As the media reported on the circus of preparations a summit between two world leaders entails, that key question largely went unanswered. Everyone knew Trump had no intention of confronting Putin for interfering in the 2016 U.S. elections, so it seemed like strange timing with the next elections right around the corner.

Once the summit happened, Americans from all political persuasions considered it a disaster for U.S. interests. Here were Trump’s 10 weakest moments before, during, and after his meeting with Putin in Helsinki.

10. Congratulating Putin on the World Cup.

The day before he arrived in Helsinki, Trump tweeted like he was a big fan of Putin’s. He began by congratulating France on its World Cup win. But then Trump’s tweet took a sharp turn.

“Additionally, congratulations to President Putin and Russia for putting on a truly great World Cup Tournament — one of the best ever!” It’s impossible to imagine any past (or future) U.S. president writing these words.

While the evidence about Russian meddling has been clear to anyone with their eyes open, Trump continues to avoid and/or lie about the issue — especially when he thinks Russia is listening.

The morning of his summit, Trump tweeted that American “stupidity and foolishness” was the cause of bad relations between the two countries. He seemed to be preparing for the capitulation to Putin that came later.

This one we present without commentary.

7. ‘Getting along with Russia is a good thing.’

As journalists and leaders in both U.S. parties questioned what he’d accomplish by meeting Putin, Trump ignored the hostile actions by Russian intelligence agents.

“Getting along with Russia is a good thing not a bad thing,” Trump said. “I really think the world wants to see us get along.”

Ben Sasse, the Republican senator from Nebraska, saw it differently. “Putin is a murderer…Putin is an enemy of America,” Sasse wrote on Twitter. “He sees us as his main enemy and is engaged in ongoing attacks on our nation through information warfare.” 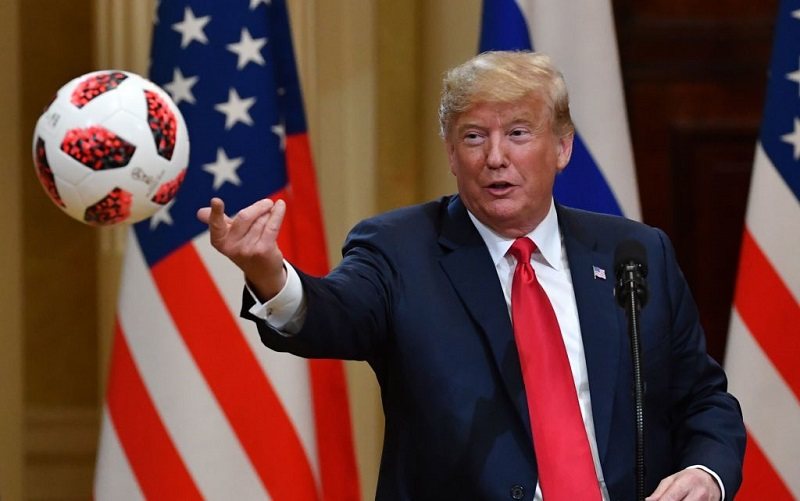 Trump received the gift of a soccer ball from Putin. | Yuri Kadobnov/AFP/Getty Images

Before going into the private room with Putin, Trump made some odd opening remarks.

“And with that the world awaits and I look forward to our personal discussion which I think begins now and then we are going to meet our whole team,” Trump said.

“You have quite a few representatives as I do. We all have a lot of questions and hopefully, we will come up with answers most importantly. It is great to be with you.”

For someone most Republicans consider an adversary, it was strange to hear the leader of the GOP saying these words.

When Putin wants to put on a show of dominance over world leaders, he shows up late. In recent years, he’s done it with Pope Francis, Angela Merkel, and Queen Elizabeth, The Daily Beast noted.

At the hour Putin and Trump were to meet in Helsinki (1 p.m.), Russia’s president hadn’t even landed at the local airport. He kept Trump waiting over an hour before arriving at  Finland’s presidential palace, where the meeting was held.

How could people around the world know how badly Trump lost? One way was to have Russian leaders and state media cheering openly.

When asked how the summit went, the Russian foreign minister said, “Better than super.”

Considering Trump had been floating conspiracy theories about “the servers of the Pakistani gentleman that worked on the DNC,” Putin looked like the more impressive leader.

3. Trump called the Mueller investigation is ‘a disaster for our country.’

When you have an election tampered with, Trump’s campaign chairman in jail, and Mueller investigating financial crimes, it’s hard to see the bad part. (The obvious exception would be if the person in question had crimes to hide.)

Anyway, Trump felt fine describing the Muller investigation as “a disaster for our country” at the press conference with Putin.

2. Trump’s fear to state the obvious while standing next to Putin

To patriotic Americans, this moment was probably the most embarrassing one of the Helsinki summit. An AP reporter asked him at the press conference whether he believed Putin or the U.S. intelligence agencies about Russia’s election tampering.

Walter Jones, a Republican Congressman from North Carolina, put it this way: “The ghost of Ronald Reagan must be in shock.”

1. Siding with Putin and Russia

It doesn’t get any more fundamental than this: Trump supported a Russian dictator responsible for wreaking havoc around the world over U.S. intelligence agents. That’s fine for a Fox News pundit, but not an American president.

(Interestingly, even Fox News pundits had a hard time coming to Trump’s defense after his performance in Helsinki.)

But U.S. Senators Bob Casey (D-Pennsylvania) and John McCain (R-Arizona) offered criticisms that stood out. McCain described Trump’s Helsinki trip as “one of the most disgraceful performances by an American president in memory.”

Casey said Trump “shamed the office of the presidency” and called it “a profound embarrassment for America.”

John Brennan, the former CIA Director, called it “nothing short of treasonous.”