Try This 20-Minute Recipe: Tomatoes and Peppers with Goat Cheese

Restaurant appetizers often arrive as individually portioned nibbles plated so beautifully you’re afraid to take a bite. It makes sense to have such attention to detail in a professional kitchen, but somehow the trend has spread to home cooking. Most appetizer recipes you see online are for tiny bites, requiring you to fold minuscule pieces of pastry. Even those based around a humble loaf of bread wind up as carefully crafted toasts with toppings arranged just so.

It’s likely your friends are perfectly capable of topping their own toast, so we decided to make things a bit more casual. This bubbling dish of tomatoes, peppers, and goat cheese creates a communal feeling, so you won’t have to worry about a perfect presentation. 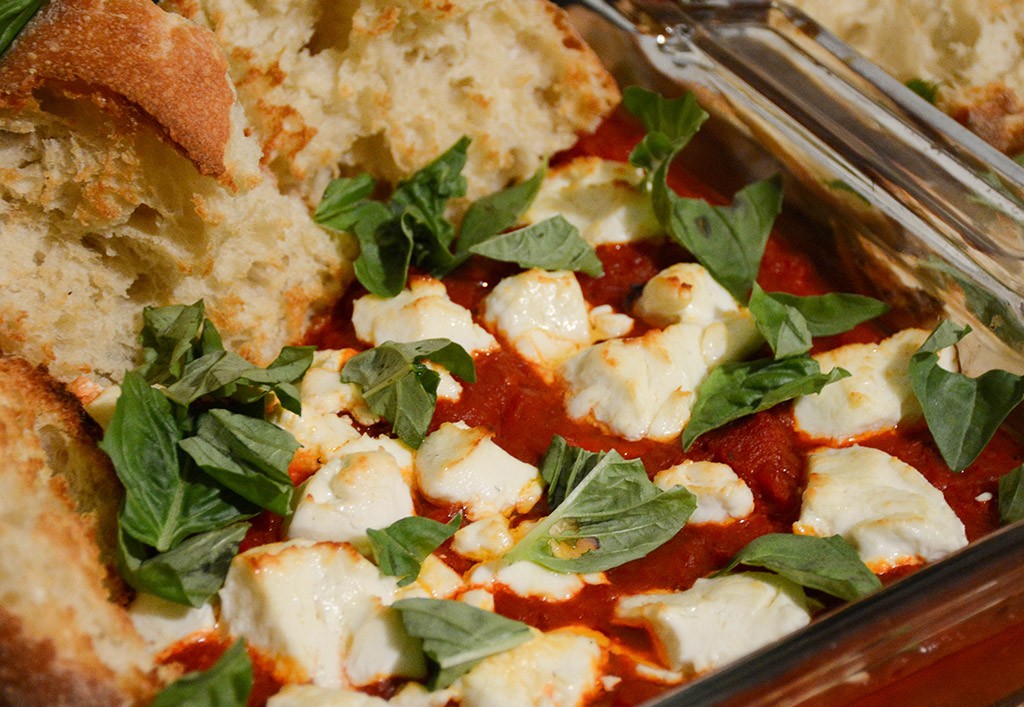 Figuring out what to cook for friends, even if it’s just a simple snack, can be intimidating. Luckily, Italian food is a universal pleaser. This recipe is basically a dressed-up version of a simple starter you see at most Italian-American restaurants. Think of it as bread sticks and marinara with attitude. Peppers add a little bit of sweetness and heft while a generous amount of goat cheese gives it a creamy texture and a bit of tang. This sauce and bread combo has all the ease of the restaurant go-to with a more interesting flavor profile.

You could arrive at the flavor and texture of this appetizer either by baking everything slowly in the oven or simmering it on the stove and giving it a final blast under the broiler. Either way, you’ll end up with a rich base of tomatoes and peppers topped with creamy, slightly browned cheese. To make things as speedy as possible, we opted for the second method. Cooking in a pan is faster, but you have to keep everything moving to make sure nothing scorches. You really can’t shortcut this 10-minute process, either. There needs to be enough time to remove the moisture and cook out any canned flavor.

Topping the sauce with all of the cheese may seem like a lot of dairy, but the tomatoes and peppers are flavorful enough to handle it. This is one part where you can make some changes. Goat cheese is a strong flavor and not everyone cares for it. Ricotta would be a good, mild substitute. You can go for something a little creamier, just avoid anything with too much moisture. Fresh mozzarella, for example, will add too much liquid to the party.

Once you pop the dish under the broiler, it won’t take long before the top starts to get nice and bubbly. As soon as you see a bit of brown, it’s finished. We topped it with basil, but you can also substitute parsley or tarragon. Toast some of your favorite bread under the same broiler, and you’re ready to eat.

Both the tomatoes and the goat cheese call for something acidic to drink, which makes white wine an ideal choice for this appetizer. The Kitchn suggests a Sauvignon Blanc, Chenin Blanc, or dry Riesling. For red wine, go for something in the medium-body range with a fair amount of acidity, like a Pinot Noir or a Barbera.

For beer, the acidity of the tomatoes helps you make your selection. The Beer Store suggests amber ales to go with tomato sauces since the hops and mild sweetness balance the flavors. Since this recipe is a bit on the spicy side, it can also handle an IPA. Beer Advocate likes wheat beers with goat cheese, so you could go the lighter route as well.

Cocktails are a bit trickier for pairing purposes. Whenever you find yourself in this position, it’s always a good idea to look at the ingredients in the recipe. A tomato-based drink is a little too matchy matchy, but something with basil would be particularly nice. Try this herbaceous cocktail from bartender Erik Lorincz, which was featured on PUNCH.

Tomatoes and Peppers with Goat Cheese

We often rub toasted bread with garlic and drizzle olive oil on it, but you really don’t need to in this case. The peppers, cheese, and tomatoes bring enough flavor on their own. This recipes makes enough for 6 people.

Transfer sauce to an 8-by-8-inch baking dish. Scatter goat cheese evenly over the top, gently nestling into the sauce. Broil until sauce is bubbling and cheese begins to brown, 4 to 6 minutes. Scatter basil over the top. Serve with bread

See you back here next weekend!