These Are the Ugliest Train Stations in America

Traveling by rail can be appealing, especially when you consider all the scenic train rides out there. A train ride sounds even better since you don’t have to deal with the terrible delays and hated airports that come with air travel. But a train ride isn’t all it’s cracked up to be, especially when you get a look at the ugliest train stations in America.

We know which are the ugliest airports in the United States, and these train stations are just as hideous (especially the big city at No. 3 with a hideous depot). All aboard! 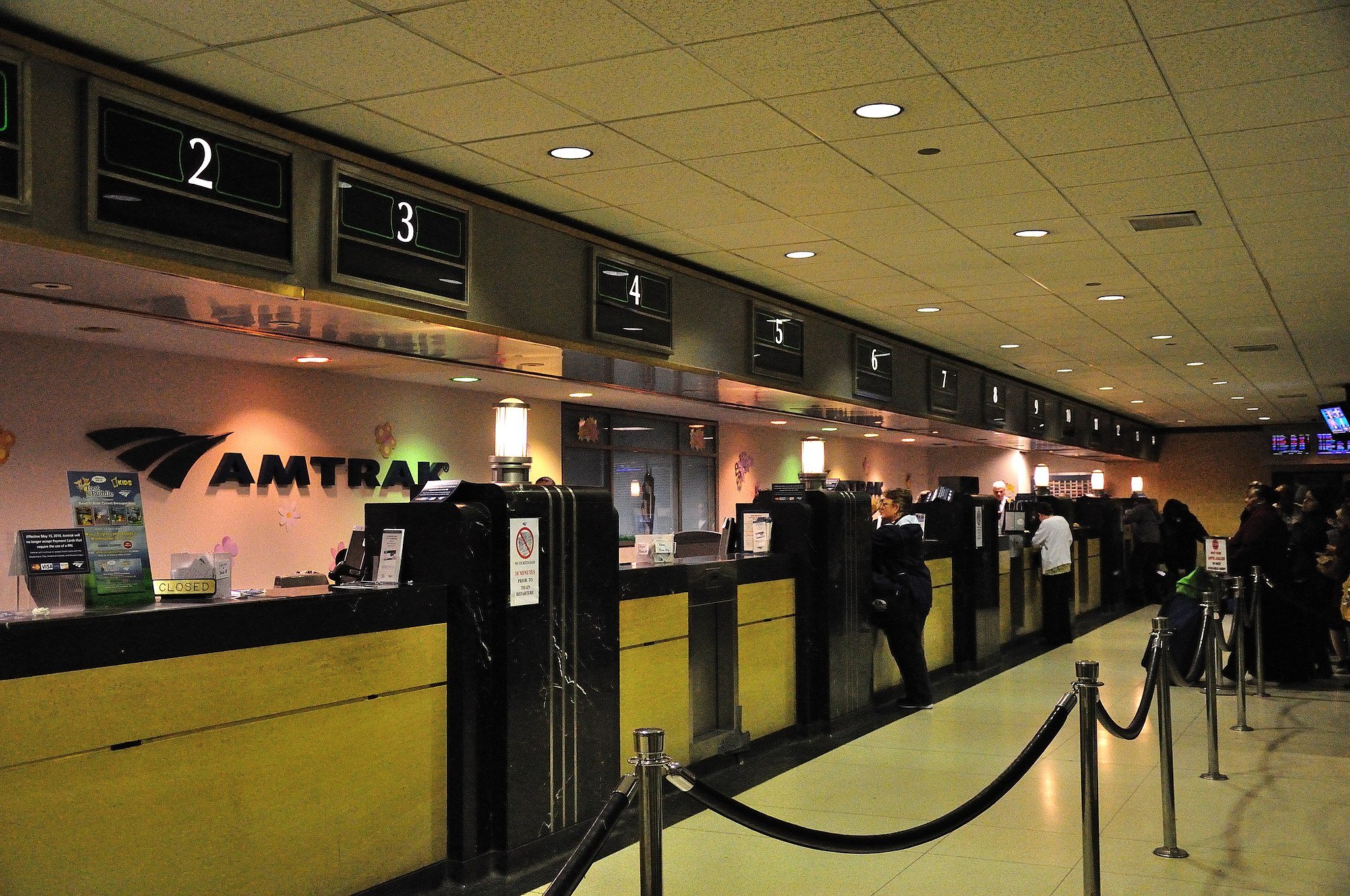 The Great Hall at Chicago Union Station is just that, great, but the rest isn’t. | vxla via Wikimedia Commons

Sure, the Great Hall at Chicago’s Union Station lives up to its name. The open room contains soaring ceilings, glass skylights, and lovely detail. The rest of the station, however, is a maze of narrow, twisting hallways that confuse travelers who aren’t familiar with them.

Next: Is this really a train station? 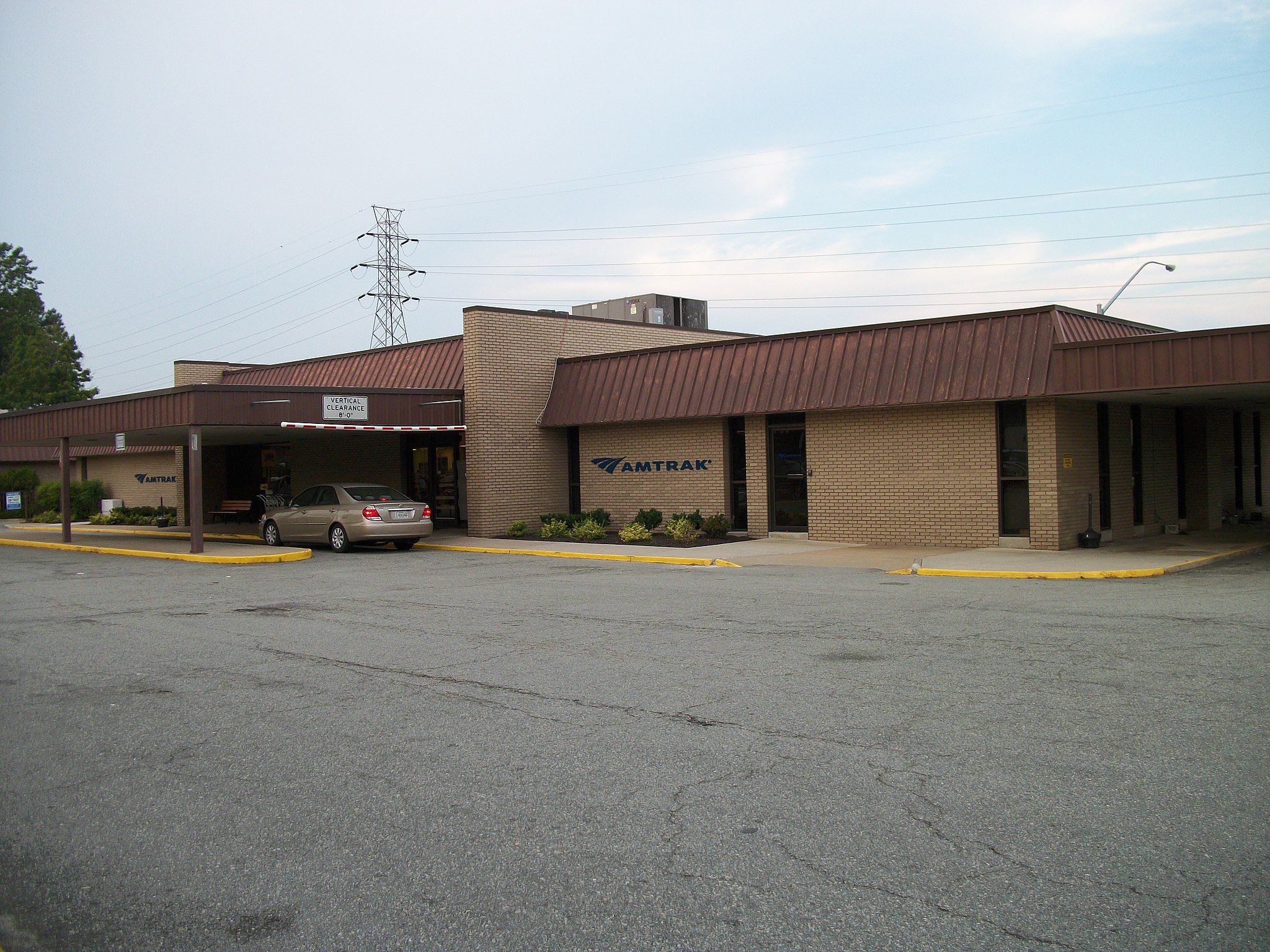 Whether you’re pulling up to Richmond’s Staple Mills Road Station via car or train, you’ll probably have no idea it’s a train stop. The low-rise brick building could easily be mistaken for a small-town library or elementary school. Dated and worn-out brown benches in the waiting area definitely qualify as ugly, which is why Richmond makes our list.

Next: Ugly on the inside. 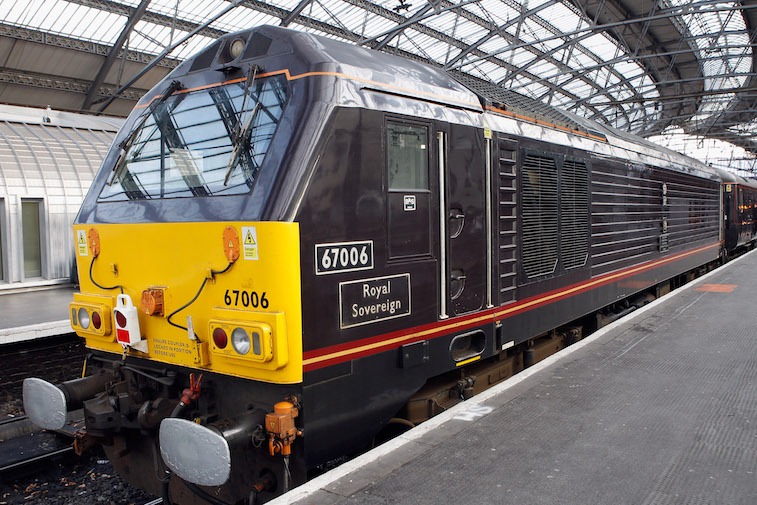 A train waits at the station. | Christopher Furlong/Getty Images

Just like Richmond’s Staples Mills Road Station, Newbern’s train station can be mistaken for any suburban building from the outside. However, it’s what’s on the inside that makes it one of the worst train stations in America. Actually, it’s more like what isn’t on the inside. Do you need to withdraw money to pay for your ticket? Sorry, isn’t an ATM. Are there bathrooms, vending machines, or Wi-Fi access. No, no, and no. The lack of services makes Newbern one of the worst train stops we can think of. 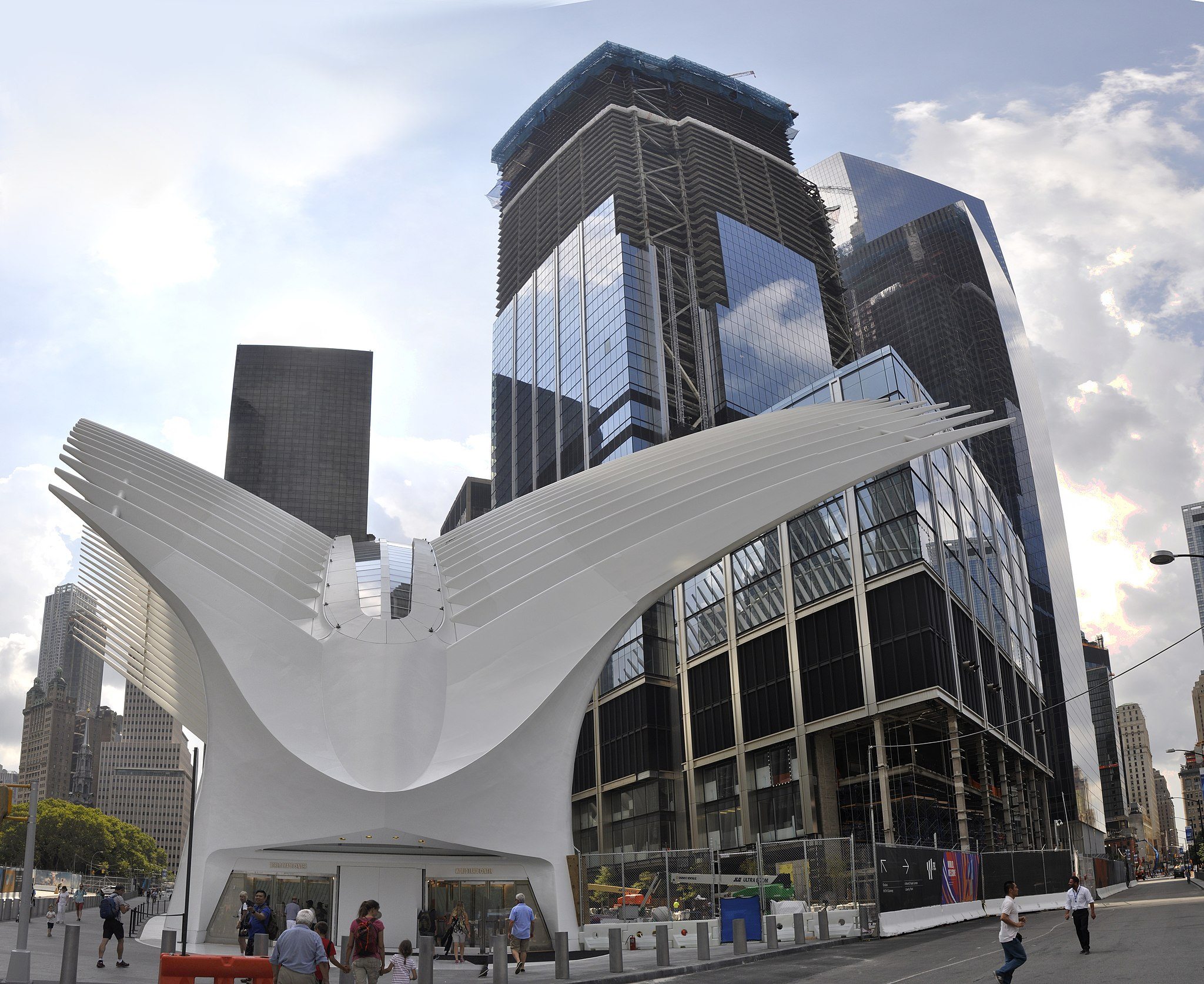 The Port Authority depot at the World Trade Center is one of the ugliest train stations in America no matter how you look at it. Outside, what looks like a perforated clam shell soars over the opening. Inside, it’s described as too white, sterile, and lacking necessities such as benches and newsstands. Oh, and it handles only 50,000 commuters per day and cost $4 billion, according to the New York Post.

Next: The newest station in the state leaves a lot to be desired. 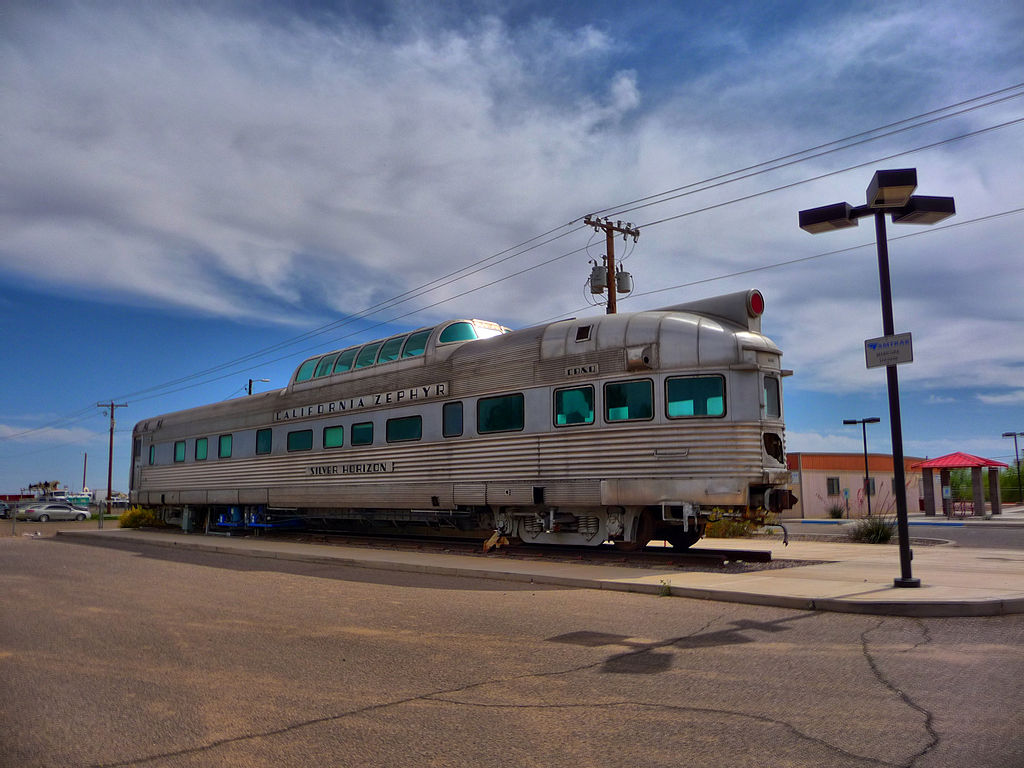 The train station in Maricopa, Arizona (background) is one of the ugliest around. | Brent Schmidt via Wikimedia Commons

Arizona’s newest Amtrak station doesn’t have much wear and tear, but it’s still one of the ugliest train stations in America. The town of Maricopa could have built something unique, memorable, or distinguishable from any other small town station, but it instead constructed a bland edifice that looks like a handful of shipping containers glued together.

Next: We can’t believe this is the best this city could come up with. 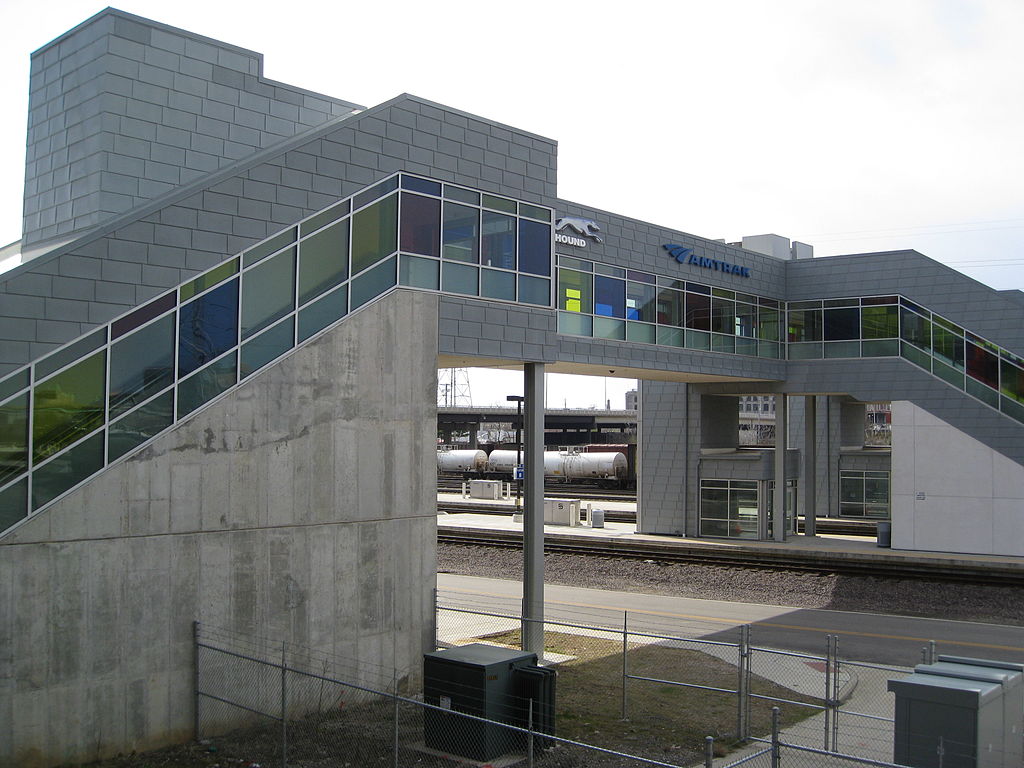 The new transportation hub in St. Louis, which includes its Amtrak station, is miles better than the old one, according to CityLab. But the fact that a sterile, uninspiring building is the best the Gateway City could come up with is baffling. When compared to Union Station, which is only a block away and still services local trains, Gateway Station is downright hideous.

Next: If only we could go back in time. 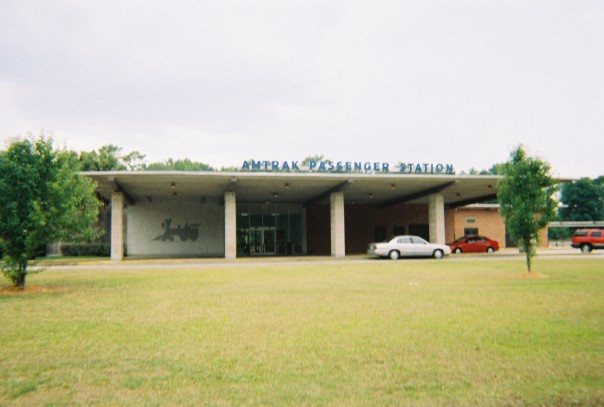 Amtrak trains used to stop at Savannah’s Union Station, which had two soaring towers and enough elegant touches to make every rider feel like a king. If only we could go back in time. The current Amtrak stop is a bland building that is one of the ugliest train stations in America, especially compared to what used to be.

Next: Take the bad with the good. 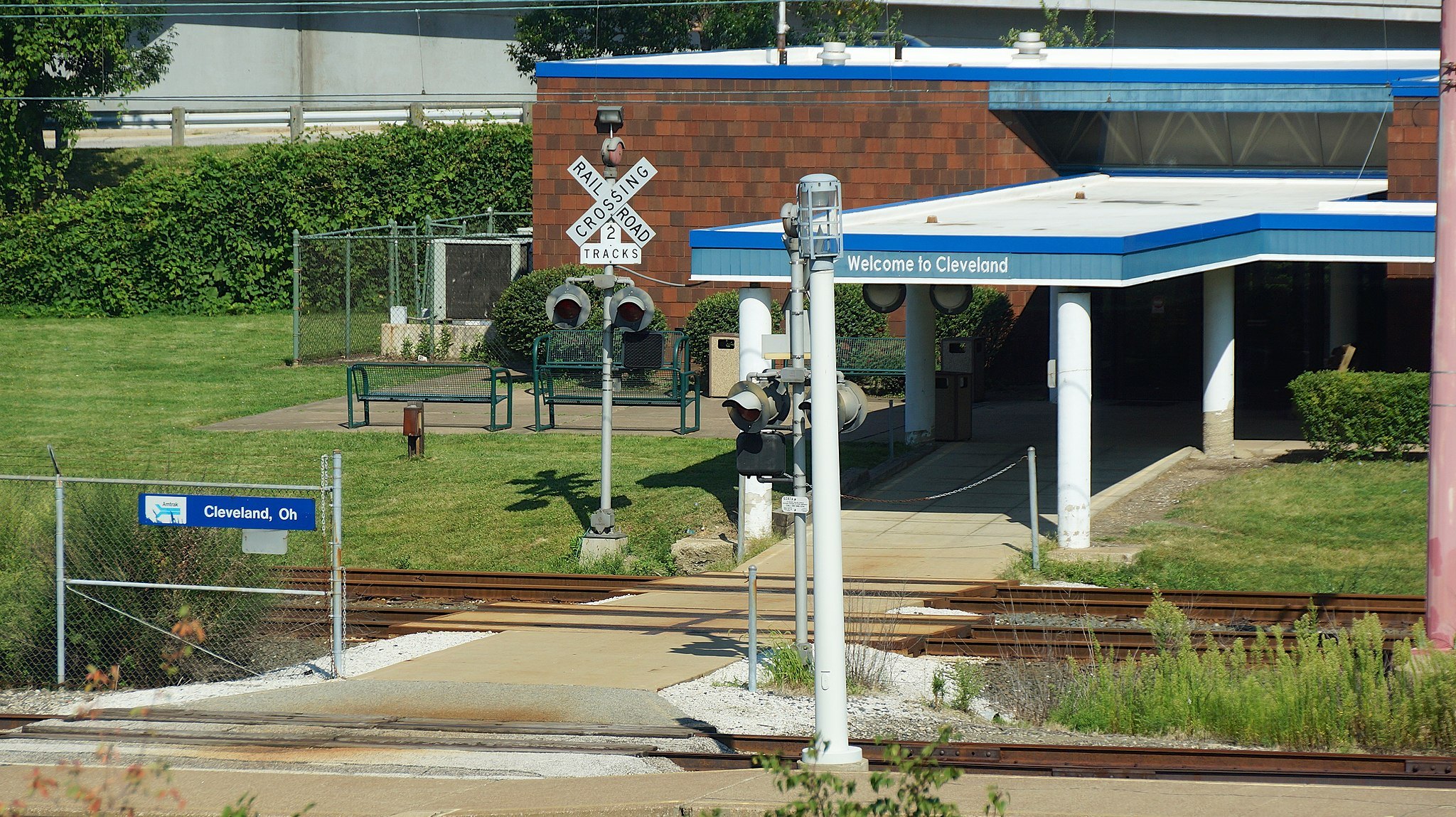 The good news is Cleveland’s Lakefront Station stops in the heart of downtown. It’s a short walk to the city hall and the Rock and Roll Hall of Fame. The bad is everything else. The station looks more like a highway truck stop or dilapidated bus depot than something you’d expect to find in a large U.S. city.

Next: It’s hard to tell where you are. 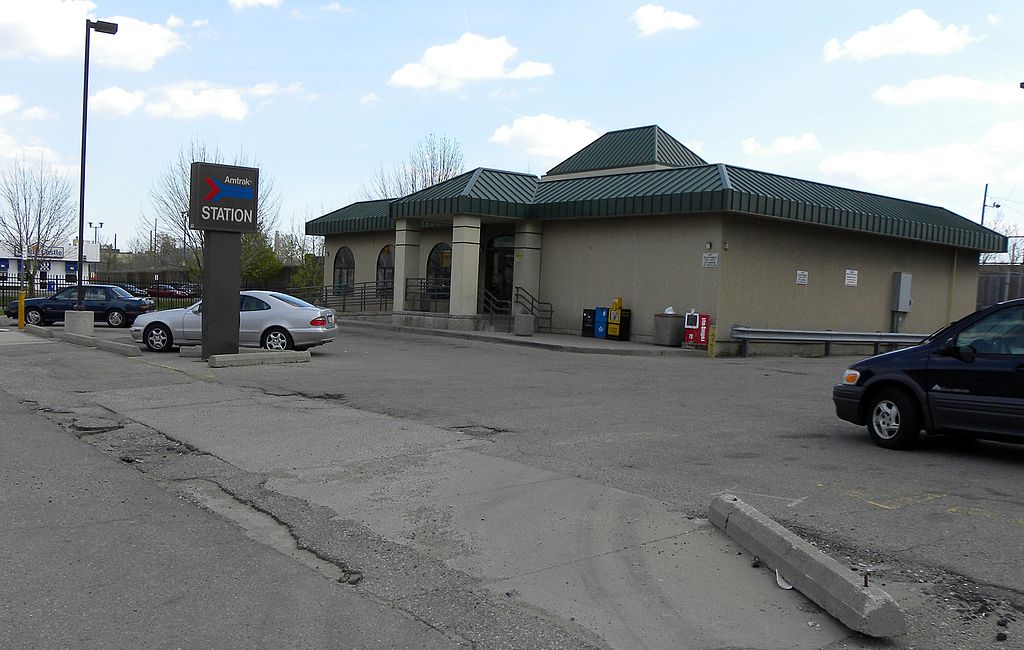 Are you at a train station or an anonymous strip mall? It’s hard to tell if you’re at Detroit’s Amtrak station. From the outside, the only way to tell you’re at a train depot is the giant Amtrak sign on the outside. Otherwise, it looks like any number of urban mini-malls around the country. It’s one of the ugliest train stations in America, and its’ not anywhere close to downtown Detroit, either.

Next: Did the architects spend all their time designing the inside? 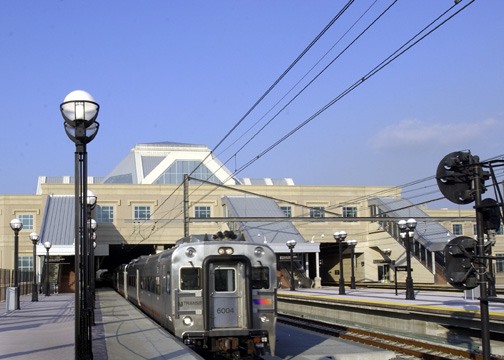 The inside the Frank R. Lautenberg Station in Secaucus is everything you’d want in a train station: Spacious, well-lit, and plenty of restaurants. It’s the outside that makes this one of the worst train stations in the U.S., especially when you consider it opened in 2003. It looks like the architects dropped a glass pyramid on top of an old parking garage and called it a day. You think you’d get a little more from a $450 million building.

Next: This city has no shortage of terrible-looking train stations. 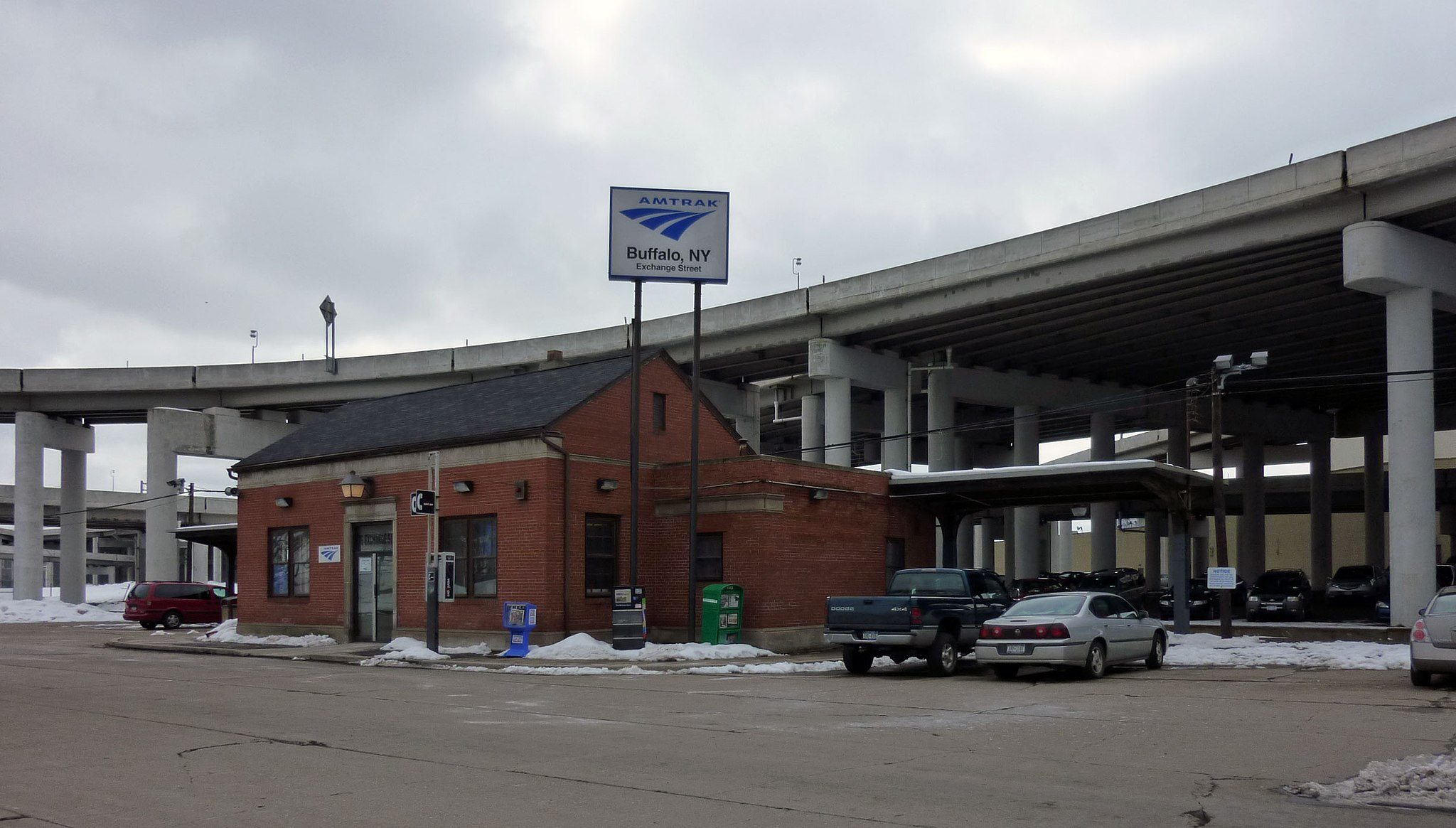 Buffalo has two Amtrak stop about eight miles apart from each other. We could have picked either one to represent the ugliest train stations in America, but we think the Exchange Street is more of an eyesore than the Depew Street stop. The Exchange Street station looks like they turned an old house into a train station before they built a highway overhead. It’s not easy on the eyes, which is why we say it’s one of the worst around. 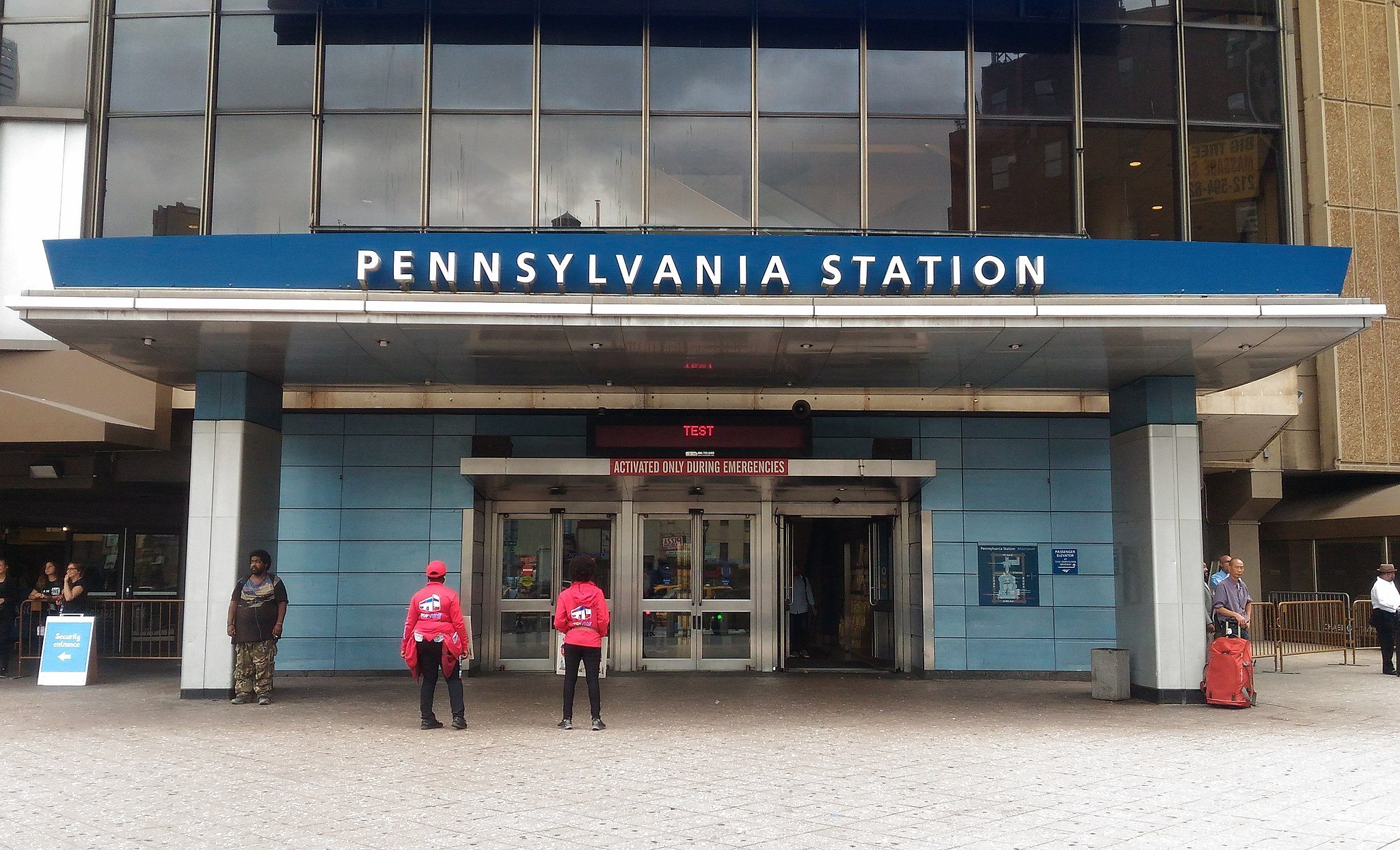 It gets worse once you’re actually inside New York’s Penn Station. | NHRHS2010 via Wikimedia Commons

We’re back in New York at the current Penn Station, the one buried underneath Madison Square Garden. It’s one of the almost universally loathed train stations in the U.S., and it’s easy to see why. The trains never run on schedule, the prices are high, and a large homeless population makes the already-crowded station even tighter, according to frequent riders.

More people move through cramped and windowless Penn Station each day than the three airports serving New York City, according to Gizmodo. Whether you’re looking at it from the inside or outside, this is one of the ugliest train stations in America. A $1.6 billion construction project might make things better, but we’ll wait and see before we take Penn Station off the ugly list.

Next: A hideous train station in one of the biggest cities in the U.S. 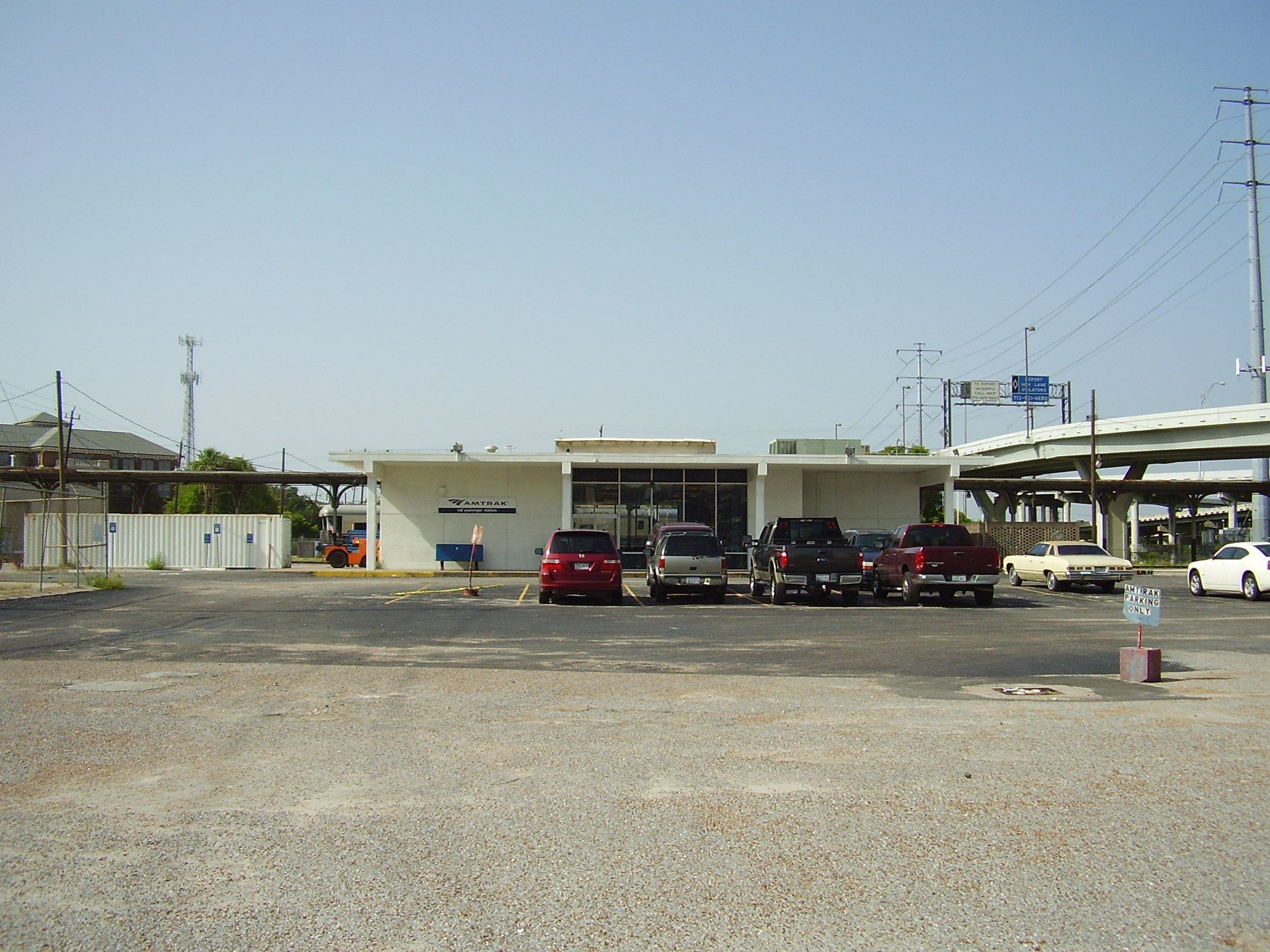 Houston is one of the most sprawling cities in America, so it’s a good thing the Amtrak trains near the city center. Still, it’s hard to fathom that one of the biggest cities in the U.S. has such a small and hideous train station. Aside from floor-to-ceiling windows looking out at the track, the low-slung building looks more like a former gas station than a train stop in a major American city.

Next: Another stop in a state we’ve already visited. 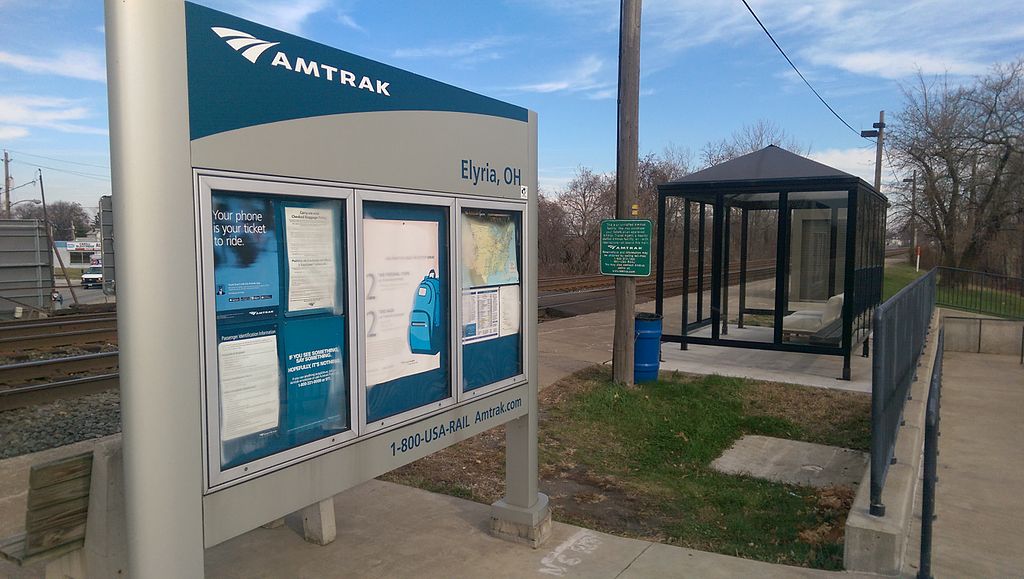 The Elyria, Ohio, Amtrak station is an outdoor kiosk. | Kiriayaaoi via Wikimedia Commons

Elyria sits just west of Cleveland, another city with one of the ugliest train stations in America, but this one is worse. That’s because the word station is a misnomer. There’s no station to speak of, just an outdoor kiosk covered with some plexiglass. That said, at least the benches look plush and comfortable. Apparently, the powers that be decided to do the quick and easy fix after the old station burned down.

Next: This one takes the cake as the worst train station in America. 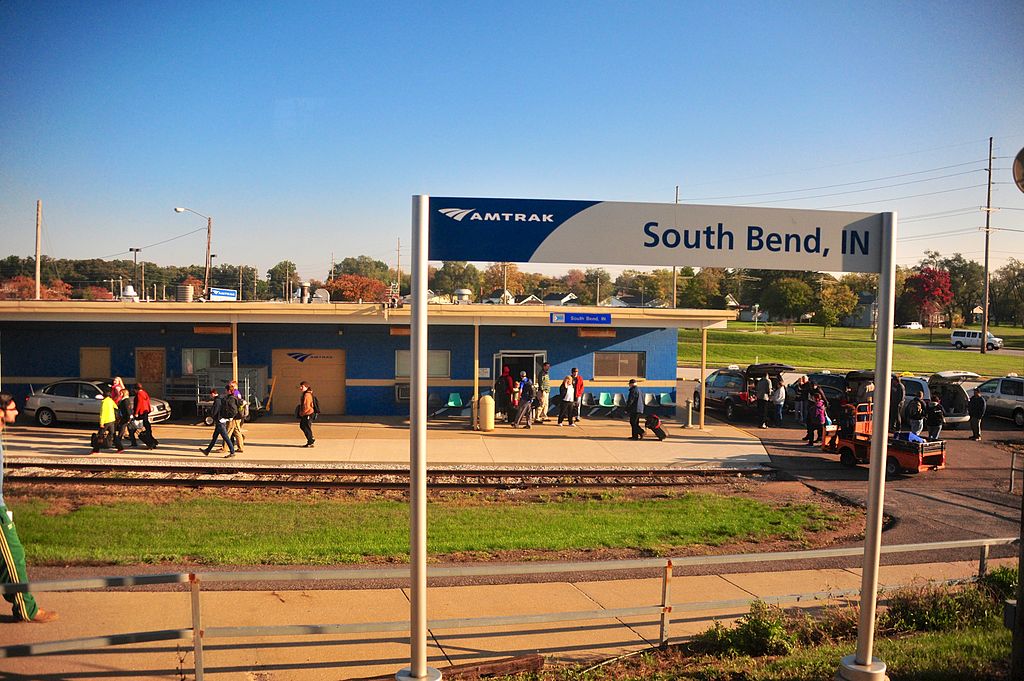 South Bend’s train station dates to 1970, but it looks older than that. | Ryan Stavely via Wikimedia Commons

South Bend Station opened in 1970, but it looks much older than that. The utilitarian building has only a handful of windows, a few benches, and only a smattering of seats outside where you can wait as the train approaches. Inside or out, it’s just not appealing, which is why we call it the worst train station in America.

All population figures are 2017 estimates from the United States Census Bureau.

Read more: This is the No. 1 State With the Most Presidential Burials