We’ve heard it before. Malls are dying. Retailers can’t keep up and have to close forever. Even great American companies are close to disappearing for good. 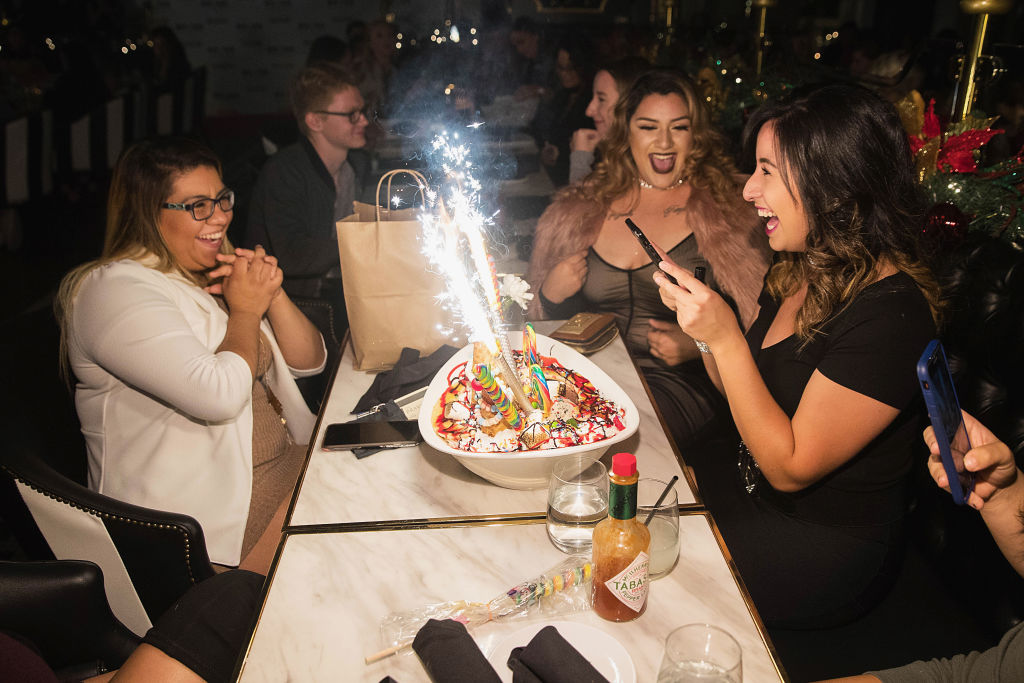 Guests celebrate a birthday at the Sugar Factory American Brassiere at The Shops at Bravern. | Mat Hayward/Getty Images

Across Lake Washington, east of downtown Seattle, are The Shops at Bravern. The outdoor space has all the bells and whistles: Valet parking, fountains and gardens on the concourses, and luxury stores such as Prada and Hermés.

Next: Let’s get personal. 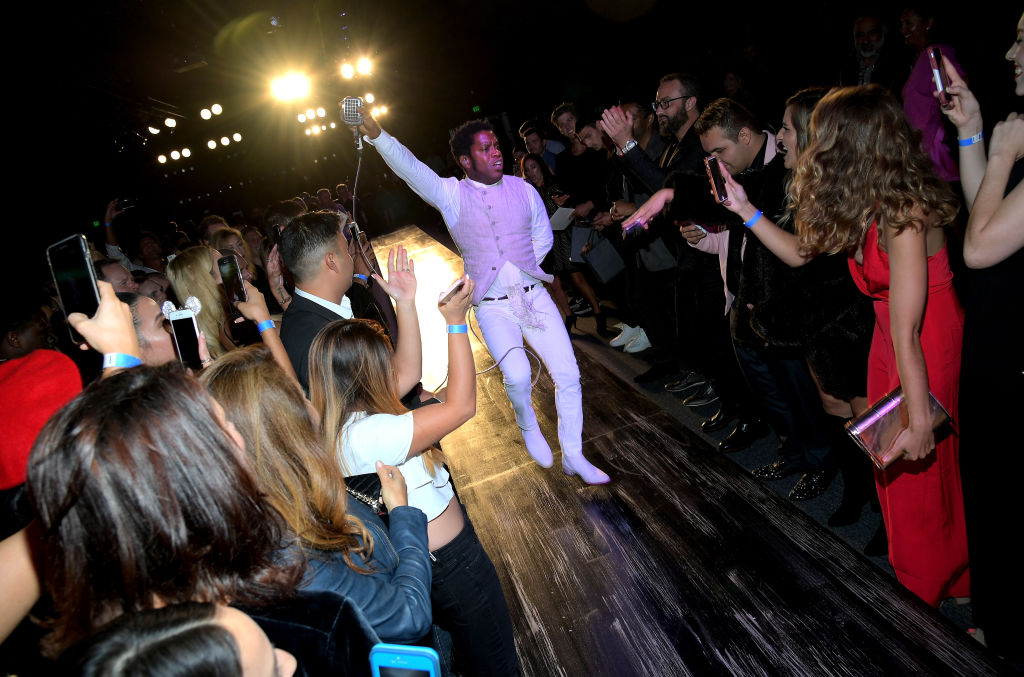 Finding the right size or choosing the best color is half the battle when you’re shopping. South Coast Plaza is here to help. Among the many amenities is a personal shopper service to help pick the best additions to your wardrobe. Oh, and there’s a currency exchange, a concierge, and a fine arts center attached. You won’t find those at your run of the mill mall stocked with failing retailers.

Next: Paradise within paradise. 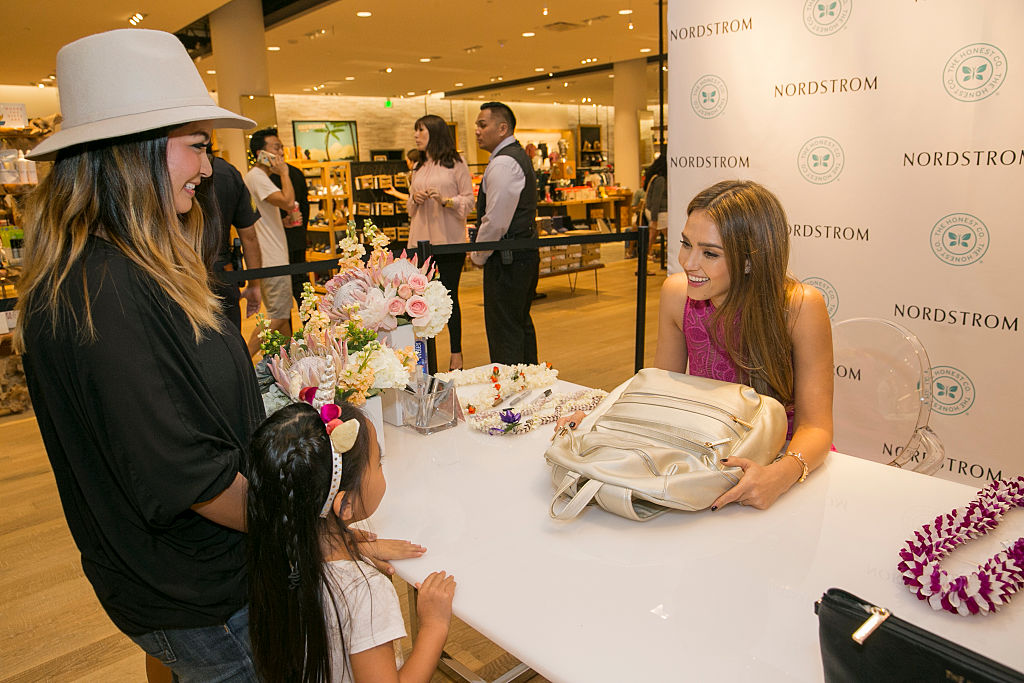 If you’re in downtown Honolulu, you’re already pretty close to paradise. Take it a step further by shopping at Ala Moana Center and you’ll probably reach Shangri-La. The outdoor shopping experience is augmented with live music on two stages and changing art installations.

Next: Another method to separate you from your money. 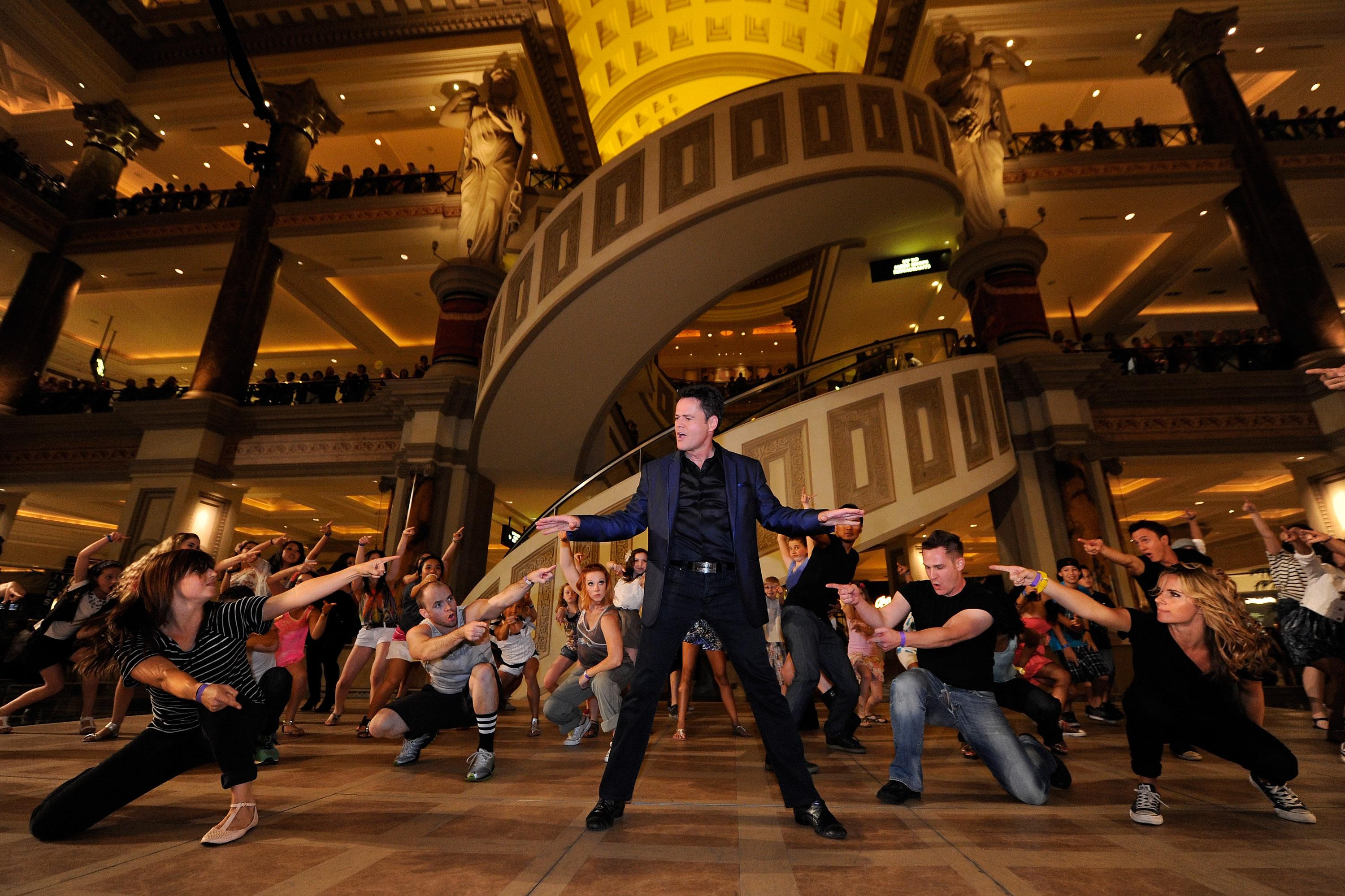 Even if Las Vegas can’t get you to drop a dime on the casino floor, there’s a chance you’re still going to come home with less money. Cartier, Fendi, and a private showroom at Burberry are just a few of the lavish shops catering to luxury brand lovers.

Next: Why not double down on luxury shopping? 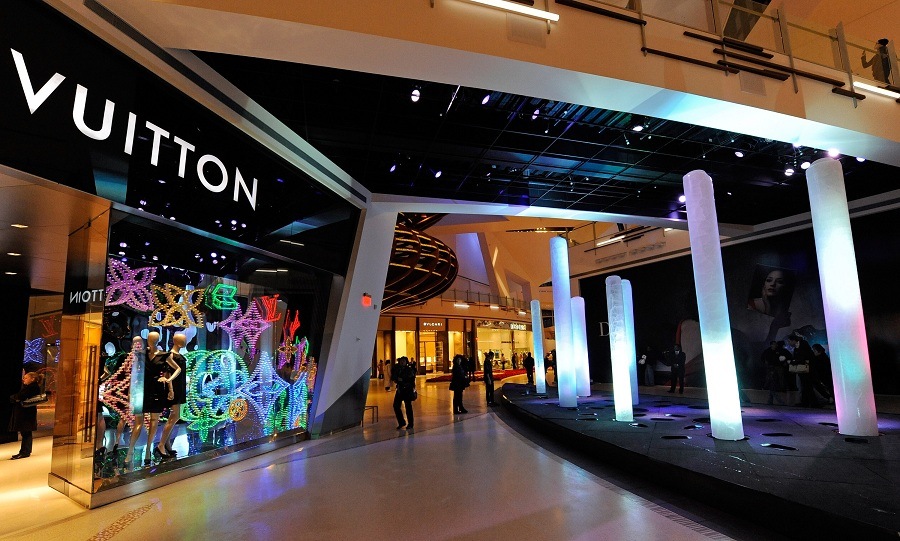 The Shops at Crystals at CityCenter | Ethan Miller/Getty Images

If the Forum Shops at Caesars Palace, which is one of the most luxurious malls in America, isn’t your style, then you’re in luck. Just a few blocks south on the Vegas strip at the Aria Resort are The Shops at Crystals.

Simon Property Group owns the mall, but this mall is different from Simon’s other properties. You can expect all the luxury brands, such as Gucci and Jimmy Choo, in a refined setting with glass sculptures, an indoor treehouse, and Earth-friendly amenities.

Next: A name that screams luxury. 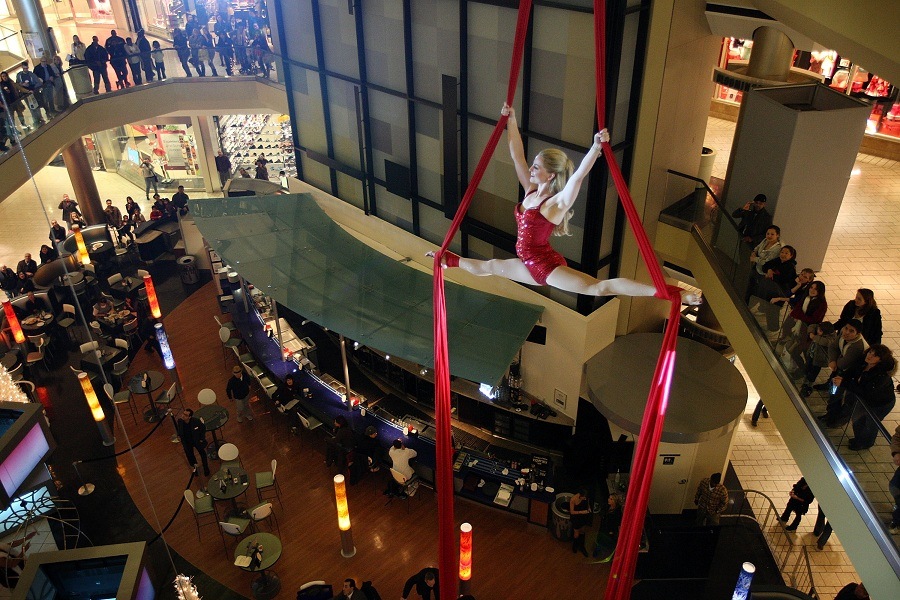 Beverly Hills screams luxury, and even though Beverly Center mall is in Los Angeles it has all the splendor shoppers want. This luxury mall truly caters to the elite.

In addition to extravagant stores and fine dining, the mall has a heliport for the rich and famous patrons who don’t want to deal with Los Angeles’ nightmare traffic. 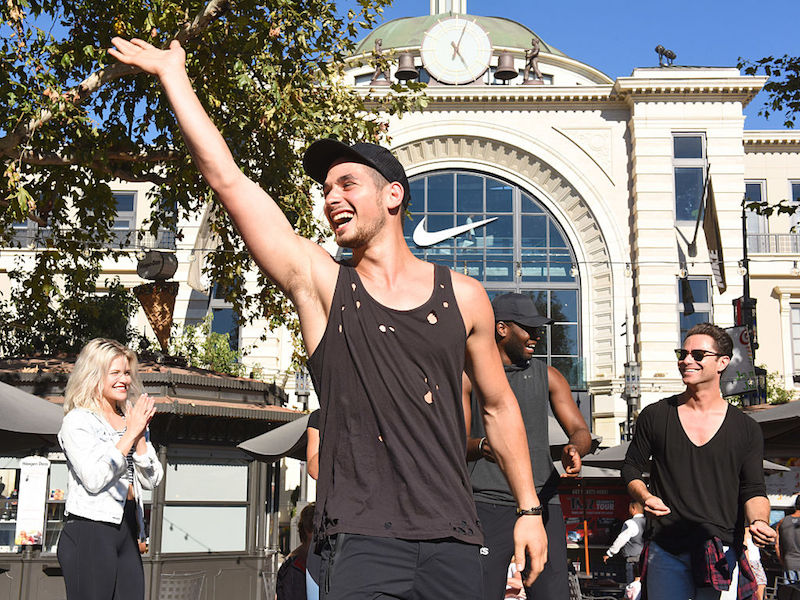 A Dancing with the Stars event at The Grove. | Vivien Killilea/Getty Images for Caruso Affiliated

Luxury shopping is about more than the stores. It needs to be an experience, and The Grove delivers on that front. It has events for the kids. There are live concerts. You can have your car detailed at the auto salon while you shop. Plus, you might catch a glimpse of a few celebrities perusing the shops.

Next: At the crossroads between two wealthy clientele. 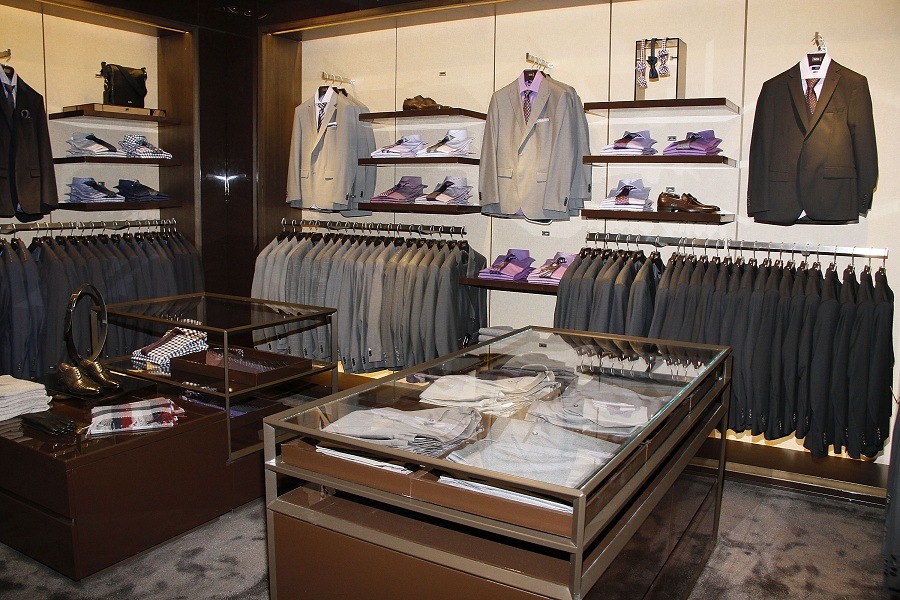 Situated between New York City and the Hamptons, Americana Manhasset caters to a wide array of wealthy clients. The swanky shops, the private shopping events, and the annual Concours d’Elegance car show are just part of what makes Americana Manhasset one of the premier luxury shopping malls in the U.S.

Next: Would you like some wildlife while you shop? 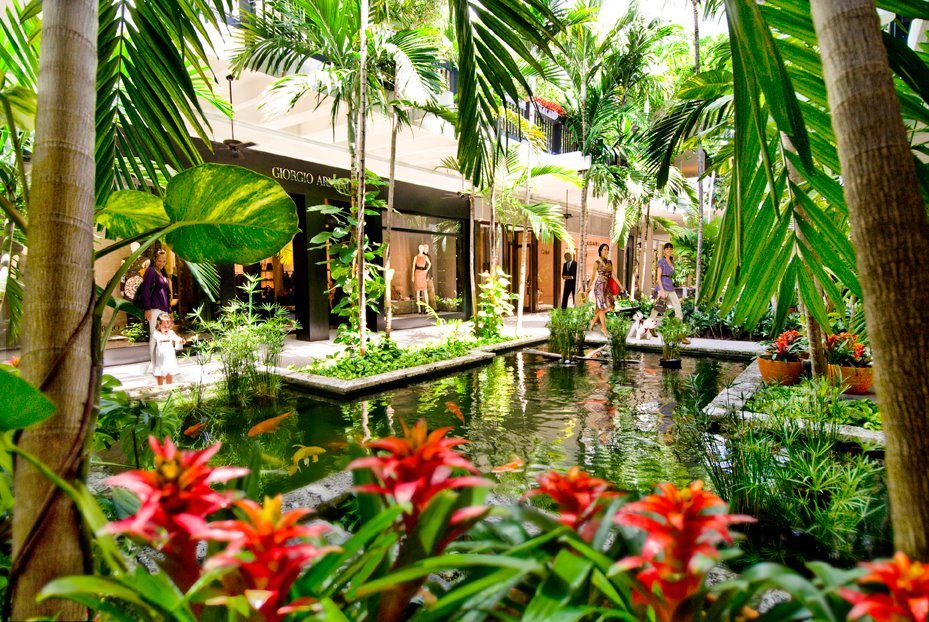 Everything about Bal Harbour Shops screams luxury. The mammoth mall just north of Miami Beach has it all. Luxury shops offering exclusive, limited-edition items. High-end cars in the valet parking lot. World-class restaurants. Koi and turtle ponds dotting the concourse. Almost every amenity at Bal Harbour sets itself apart as a luxury mall catering exclusively to the rich and famous.

Next: One of the most profitable malls in America.

This sprawling outdoor mall in suburban Chicago is one of the most profitable in the country. According to CNBC, each square foot of retail space brings in more than $900 annually.

The mix of high-end stores, such as Neiman Marcus and Louis Vuitton, and mall staples, such as Banana Republic and Nordstrom, serves a range of shoppers.

Next: This luxury mall offers a view no other mall can match. 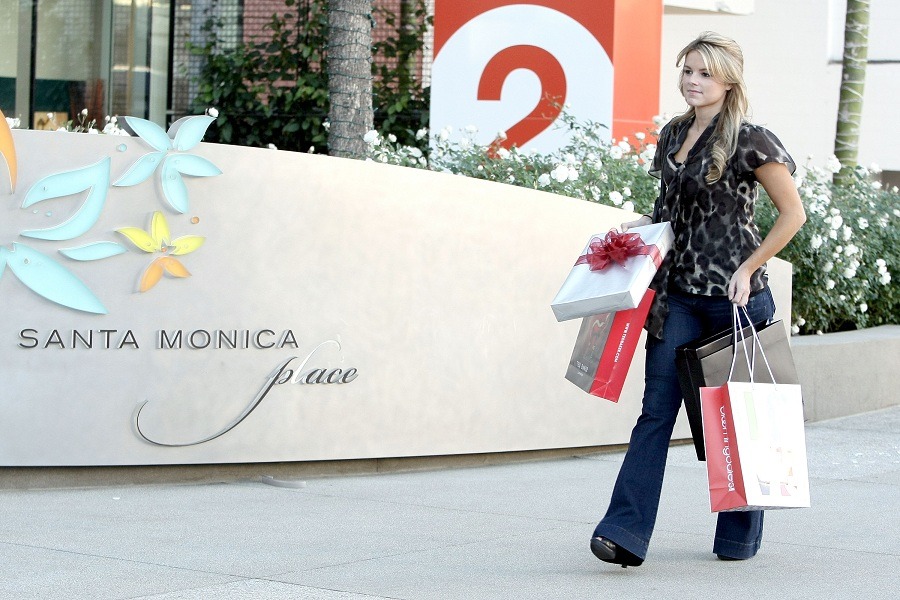 If you’re enjoying a day at Santa Monica Pier, then why not head a few blocks inland to Santa Monica Place? The outdoor mall has all the amenities we’ve seen so far, but one is totally unique. The open-air rooftop restaurant with views of the Pacific Ocean and Santa Monica Mountains is definitely one of a kind.

Next: A mall catering to the world’s movers and shakers. 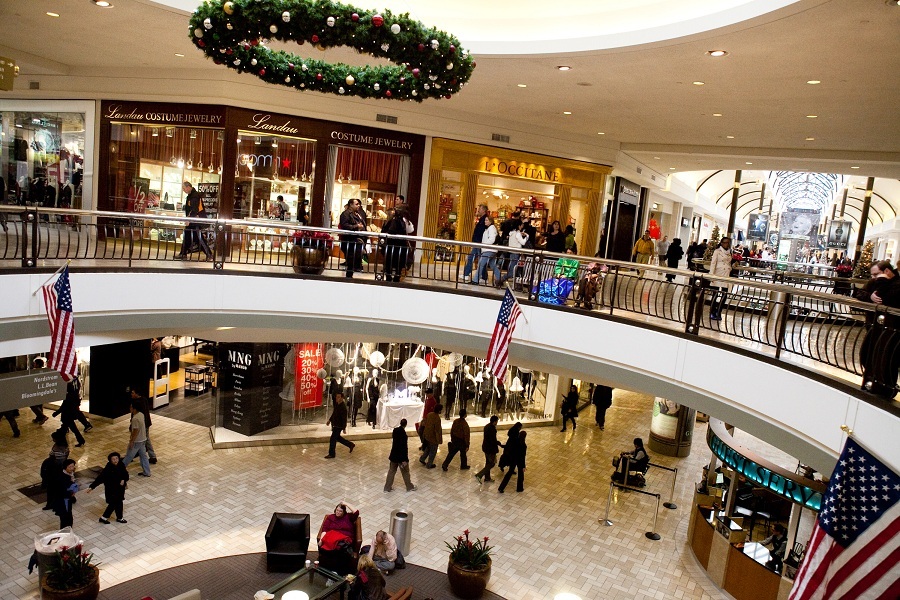 Appearances are as important to politics as actual backroom dealing. Tysons Corner Center makes sure the world’s wheelers and dealers look their best. The mall’s 2 million square feet include the usual luxury shops you’d expect, plus two Auntie Anne’s to satisfy all the hungry shoppers.

Next: Get your passport ready as we go international. 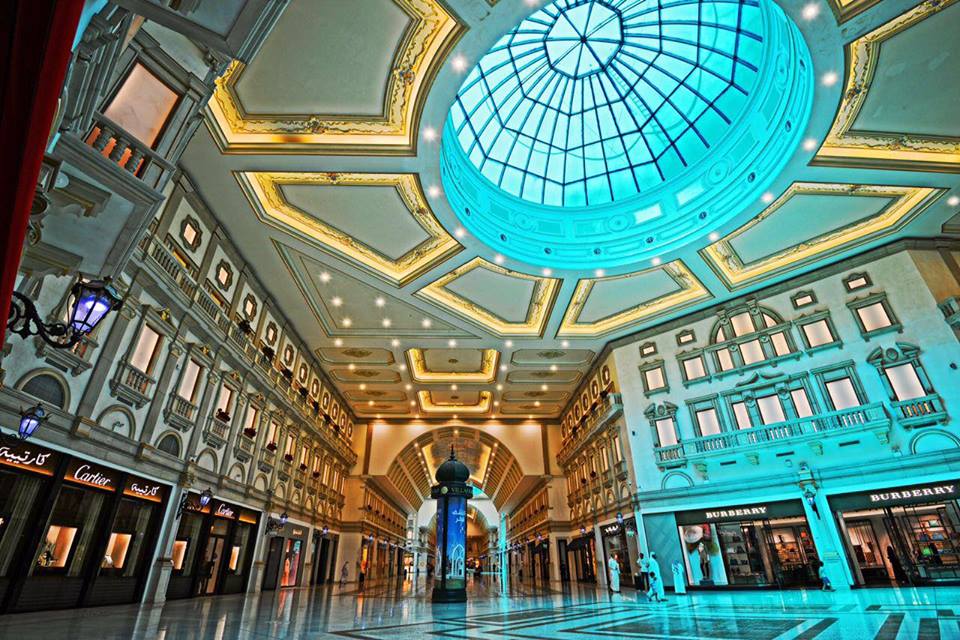 Want a taste of European splendor while visiting the Arabian Peninsula? Qatar’s Villaggio Mall is there for you. In addition to high-end luxury stores (Bulgari, Dior, and two Fendi stores), the mall has an indoor theme park plus gondolas sailing Italian-themed canals. It’s not called Villaggio for nothing.

Next: One more stop in the Middle East. 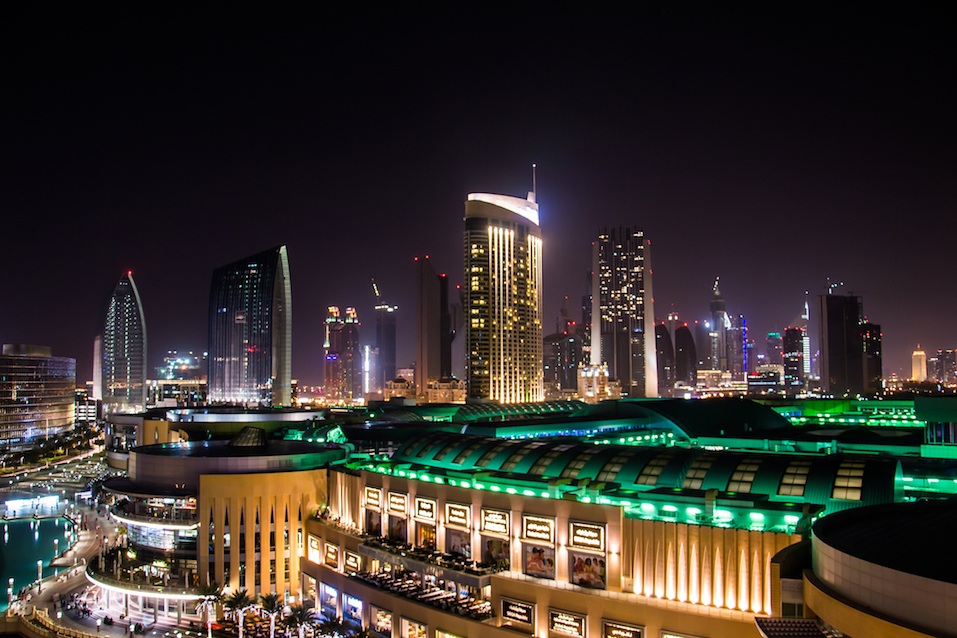 This is hardly the only mall in Dubai, but it might be the best. Dubai houses two outlet malls just like you’ll find in the U.S., other boutique malls, and the Mall of the Emirates, which has an indoor ski slope.

But Dubai Mall takes the cake from the others. It has a haunted house. If fear isn’t your thing then try the indoor ice rink, the dinosaur museum, or the aquarium with an underwater viewing area.

Next: The place where luxury shopping started. 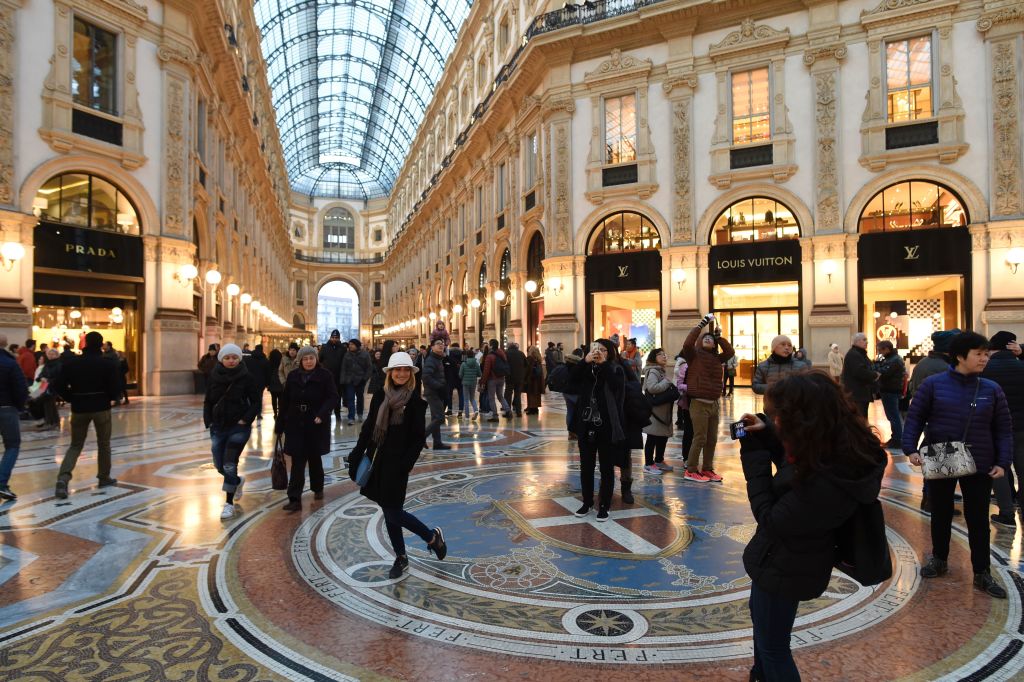 Milan’s Galleria Vittorio Emanuele II is what all other luxury malls strive to be: A beautiful shopping destination with the best stores serving exclusive clientele.

Aside from the luxury clothing shops you’d expect in fashion-conscious Milan, the area itself is something of an architectural wonder. The whole area was once an outdoor strip, and it’s now covered by an elegant glass ceiling installed before the start of the 20th century