Once a treat that kids only enjoyed at diners or a hotel’s continental breakfast, waffles have become one of the trendiest foods out there. There are niche restaurants dedicated to the breakfast treat, but even upscale eateries are putting unique spins on the quick bread. While they make a delicious base for any number of toppings, waffles might be even better when transformed into a sandwich. Whether you’re in the mood for something savory and hearty or sweet and petite, there’s a waffle sandwich here for you. These six recipes are so wonderful, you might stop buying your weekly loaf of bread. 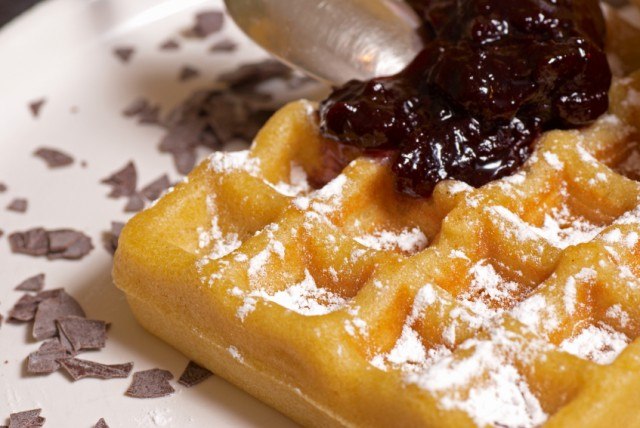 Waffle with jam and powdered sugar for a sandwich | iStock.com

Though nobody knows the exact history of the Monte Cristo sandwich, it certainly gained popularity over a number of decades. Since it’s basically a ham and cheese sandwich on french toast, it was only a matter of time before someone decided to try out some more unusual bread choices. Heidi Larsen decided to do just that, and used waffles rather than bread for this sandwich’s base.

While you could certainly make your own waffles, Larsen opted for frozen ones to keep things easier. She also had adaptability in mind, because you can use tons of different meats, cheeses, and fruit preserves to suit your tastes. “Blackberry, lingonberry, or another wild berry jam would make this sandwich golden,” she says. We also think it would be great with turkey, Swiss, a little bit of bacon, and some fig spread. Don’t forget the powdered sugar!

Visit foodiecrush for the recipe.

If you’re a bacon, egg, and cheese sandwich devotee, you’ll flip for Sommer Collier’s version. Any breakfast sandwich will be good, but this one is great thanks to stellar waffles that have a wonderful texture and feature plenty of herbs. Collier gets them just right with a few tricks: She says she uses cornstarch in the batter because it “makes these waffles tender on the inside and crispy on the outside.” She also insists you get the cooking just right. “The key is to place the batter in a hot waffle iron and let it cook until a majority of the steam has stopped pouring out,” she says.

Make sure you don’t ruin your hard work by simply stacking the waffles on top of each other as they come out of the iron, because they’ll turn into a soggy mess. Collier says as soon as one waffle finishes cooking, you should remove it and “place it in a warm oven to retain its crispy texture.” Once you’re done with the quick breads, you just have to fill them. The dollop of butter on top isn’t a requirement, but you might as well go for it.

Visit A Spicy Perspective for the recipe.

Just because you’re using a breakfast-food bun, doesn’t mean your sandwich has to be a morning meal. Christine Ma concocted this hearty meal, featuring a roast beef recipe from Simply Delicious, as a way to give her waffle iron a little bit more love. It might sound like an unusual combination, but Ma says “it ended up being the best, most delicious sandwich I have made so far. It is a must try!”

Though purchasing frozen waffles is easier, you might want to take the few extra minutes to make these homemade ones. It’s incredibly easy, and Ma says “the batter doesn’t call for any sugar vanilla extract, making it appropriate for a savory sandwich.” The only part that takes a little bit of extra attention is whipping the egg whites. They should be fluffy and hold peaks, but don’t go past that point or they will become grainy and start to deflate.

Visit Cherry on My Sundae for the recipe.

Joy Wilson’s outrageous BLT is perfect for when you tire of the original. “I put bacon, lettuce, and tomato between two cheesy waffles. Nothing but trouble,” she says. Thankfully, it’s tasty trouble.

Wilson’s waffle recipe uses both baking powder and baking soda to keep them really fluffy, even after all of the sharp cheddar makes its way into the batter. While you could finish off this sandwich with a smear of regular mayo, Wilson recommends adding a little bit of mustard and black pepper. She says, “spiced up mayonnaise plays an important role.” One bite will prove just how true that is.

Take everything you love about a southern feast and turn it into a handheld meal with Stephanie Smith’s unreal sandwich, featuring waffles she adapted from a KitchenAid recipe. Smith needed a way to recover after overindulging on an evening out. “There was only one thing that could feed these hangovers — chicken and waffles,” she says.

Save this recipe for when you’re in need of something with heft, because Smith says, “this sandwich is not for anyone trying to watch their figure.” It’s filled with crispy chicken, a handful of greens, and a drizzle of maple syrup. And the waffles themselves get a serious boost of flavor from chives, cheddar cheese, and cornmeal. These sandwiches might not be diet food, but they are so worth it.

Visit 300 Sandwiches for the recipe.

If you typically skip dessert because of the complicated steps, then Christina Lane’s easy ice cream sandwiches are the perfect recipe. With just five ingredients, they’re also super simple to make.

Lane loves the combination of chocolate and raspberry, so she looked to a unique ingredient to add flavor without making the waffles too soggy. “You should seek out freeze-dried fruit to crush and roll the sandwiches in,” she says. If you can’t find any of the crispy fruit at your store, Lane says, “you can also roll them sprinkles, mini chocolate chips, or coconut.” We like the crunch of chopped almonds.

Visit Dessert for Two for the recipe.