Most people already have a go-to recipe for classic chicken noodle soup. Every now and then, it’s nice to change up the flavors to turn the dish into something totally new. Whether you like things extra spicy or just want to find more ways to sneak bacon into your meals, one of these seven recipes will please your palate. 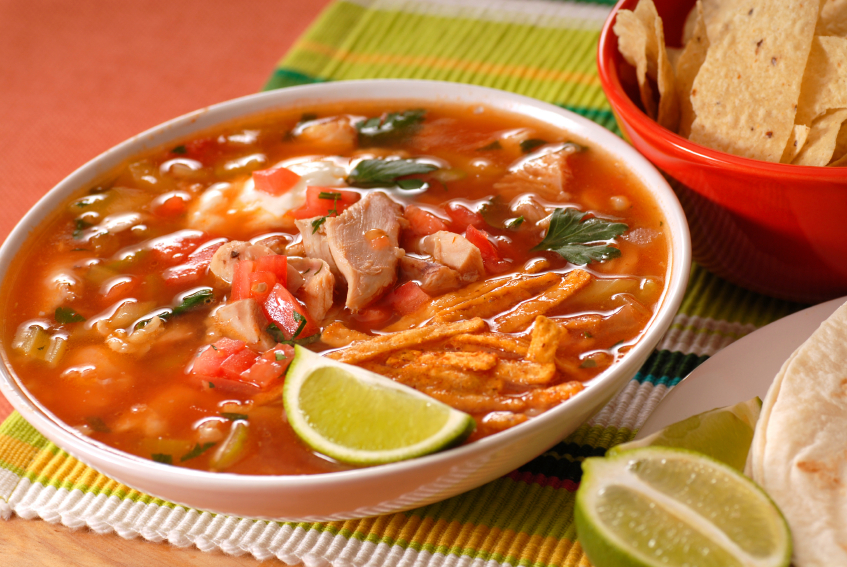 Brimming with chicken, sweet potato, avocado, tomatoes, and crispy tortilla strips, this Mexican-inspired soup from The Kitchn is truly an all-in-one meal. Unlike most recipes with south-of-the-border flavors, this one isn’t spicy. This makes it ideal for those who don’t like things too hot. That being said, feel free to add some sliced chiles.

Directions: In a 3-quart pot, bring 6 cups of water to a boil. Add potatoes and simmer, covered, until easily pierced with a knife, about 5 to 7 minutes. Drain potatoes and set aside.

In a large pot, heat 2 tablespoons oil over medium heat. Add onion and cook, stirring, until softened, about 10 minutes. Stir in garlic, cumin, salt, and pepper. Cook, stirring, for 1 minute longer. Add chicken stock and bring to a simmer. Add chicken, tomatoes, lime juice, potatoes, and cilantro. Turn off heat and cover with a lid.

In a small skillet, heat remaining oil over medium. Cook, tossing frequently, until golden and crisp, about 5 minutes. Season with salt. 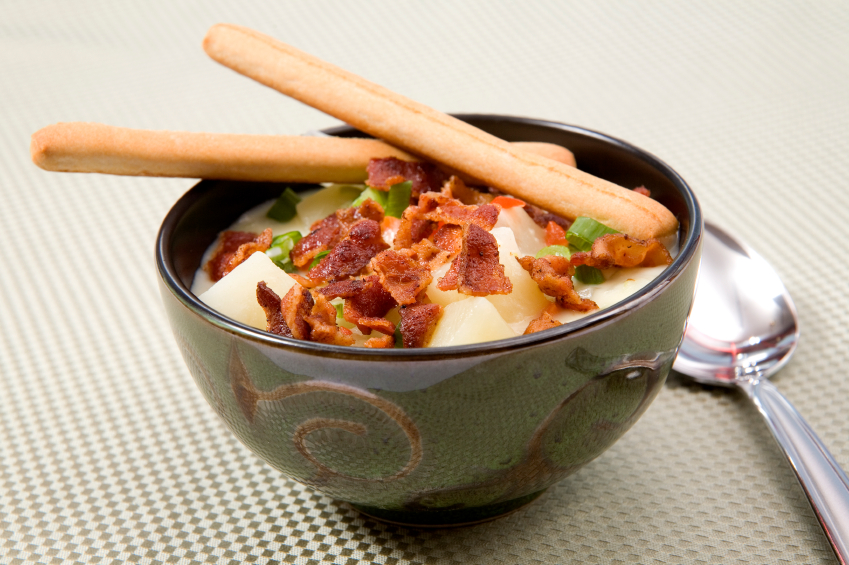 This fragrant chicken and potato soup from Food & Wine tastes like Sunday dinner’s more casual cousin. You can even use leftover roast chicken from the weekend to make this recipe. If you don’t have any cooked poultry on hand, just pick up a rotisserie bird from the store. The rosemary is what really makes this recipe special, but don’t go overboard on the herb. Too much will make the dish taste like a Christmas tree.

Directions: In a stockpot, cook bacon over medium-high heat until crisp. Add onion and rosemary. Cook until onions are soft and translucent, about 3 minutes.

Stir in chicken stock, potatoes, Worcestershire, and chicken. Bring to a boil, reduce heat, and simmer for 10 minutes, or until potatoes are tender. Season with salt and pepper. Serve. 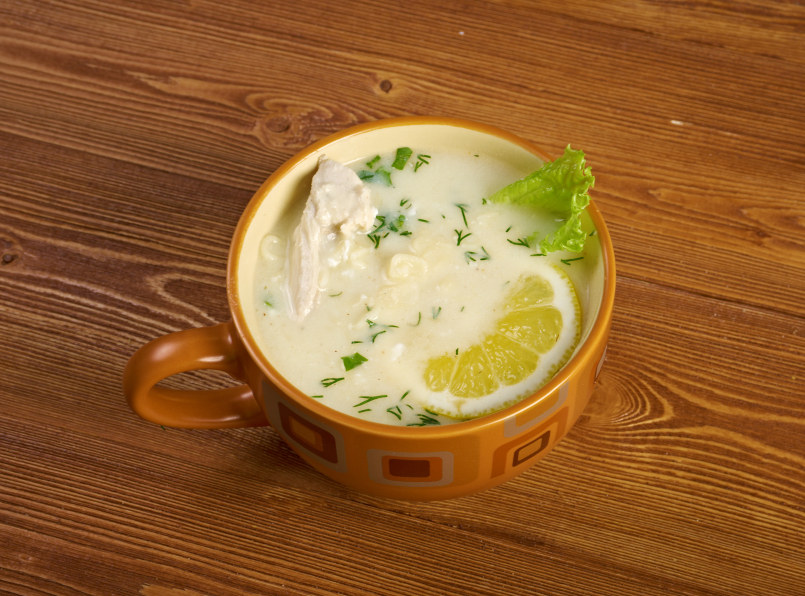 Greece’s answer to chicken soup is Avgolemono, a vibrant dish with plenty of lemon juice and egg yolks. Though it sounds a little strange, this recipe is a welcome meal on a particularly chilly day. We like Real Simple’s take on the Greek soup because it contains only seven ingredients and can be on the table in 30 minutes. If you can’t find orzo, substitute another small cut of pasta.

Directions: In a large saucepan, bring broth to a boil. Add pasta and cook until tender, about 8 to 9 minutes.

In a large mixing bowl, beat yolks. Gradually whisk in 1 cup of hot broth. Add egg mixture to saucepan, reduce heat to medium, and cook, stirring, until thickened, about 5 to 7 minutes. 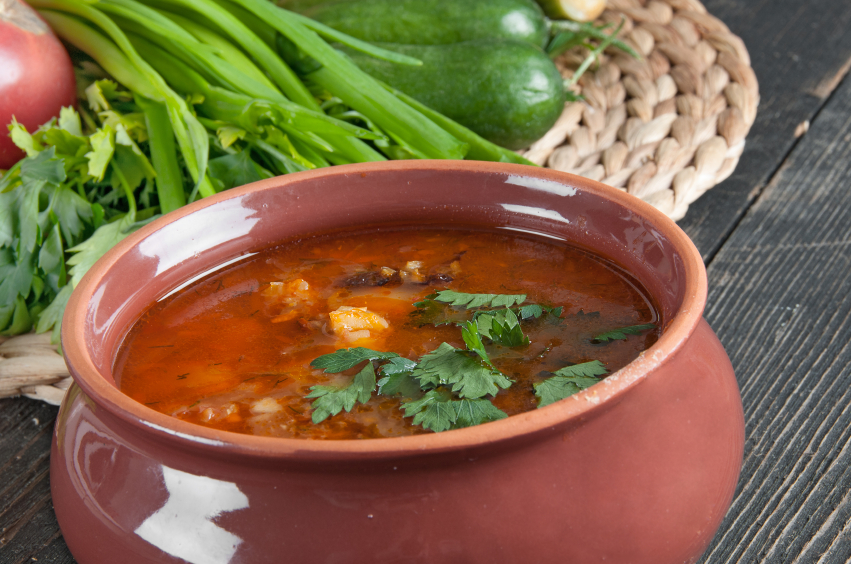 This cozy chicken soup with cream, tomatoes, and herbs from The Pioneer Woman is a weekend project that’s well worth your time. While it takes about 1½ hours from start to finish, the taste is worth the effort. You’ll also end up with enough to keep yourself well fed throughout the week.

While can buy whole chickens already cut into pieces at the grocery store, you have to be a little careful. Sometimes the packages contain parts from different birds, which won’t cook evenly. Buy a whole one and cut it up yourself. You’ll ensure more even cooking and also save a few bucks.

Directions: Cook pasta in a large pot of boiling salted water according to package directions. Drain, rinse with cold water, toss with 1 tablespoon oil, and set aside.

Add chicken pieces to a Dutch oven or other heavy pot. Pour chicken stock over top. Bring to a boil, reduce heat, cover, and simmer for 30 minutes. Turn off heat and let pot sit, covered, for 30 minutes. Remove chicken to a work surface. Using your hands or two forks, shred meat. Discard skin and bones.

Heat a small skillet over medium-high. Add extra-virgin olive oil and oregano. Remove from heat and stir to let oregano bloom. Set aside.

Stir in chicken broth, chicken, and tomatoes. Bring mixture to a boil, reduce heat to low, then stir in pasta, cream, and oregano oil. Cook until heated through, stirring occasionally. Serve soup with Parmesan. 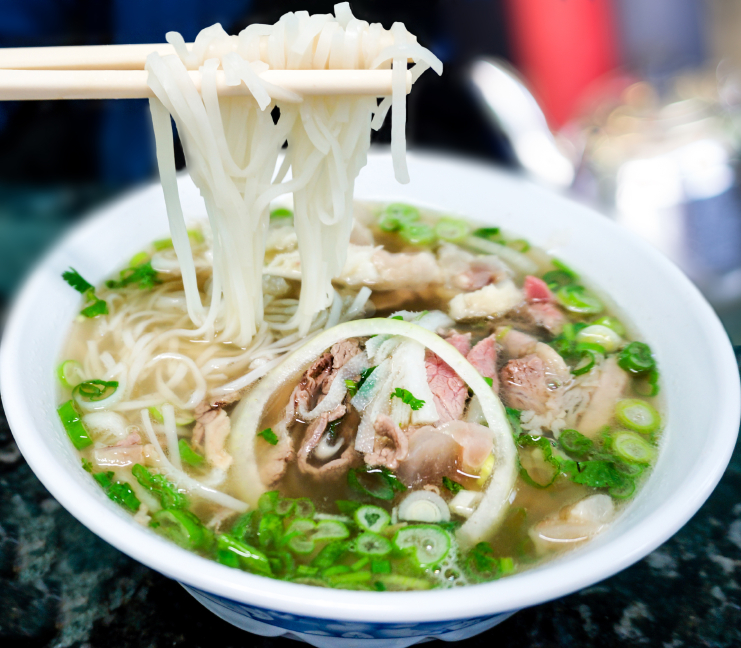 The next time you’re feeling congested, try Cooking Light’s Asian take on chicken soup instead of your usual recipe. The spicy chiles in the curry paste and Sriracha can help ease sinus pressure. Even if you’re not feeling ill, this soup is a delicious recipe to add to your repertoire.

Bring remaining 6 cups water to a boil in a large saucepan, add rice noodles, and cook for 3 minutes. Drain and add ¼ cup noodles to each of four bowls.

Remove ginger from soup and stir in lime juice. Ladle soup over noodles in bowls. Garnish with mint, cilantro, and green onions. Serve. 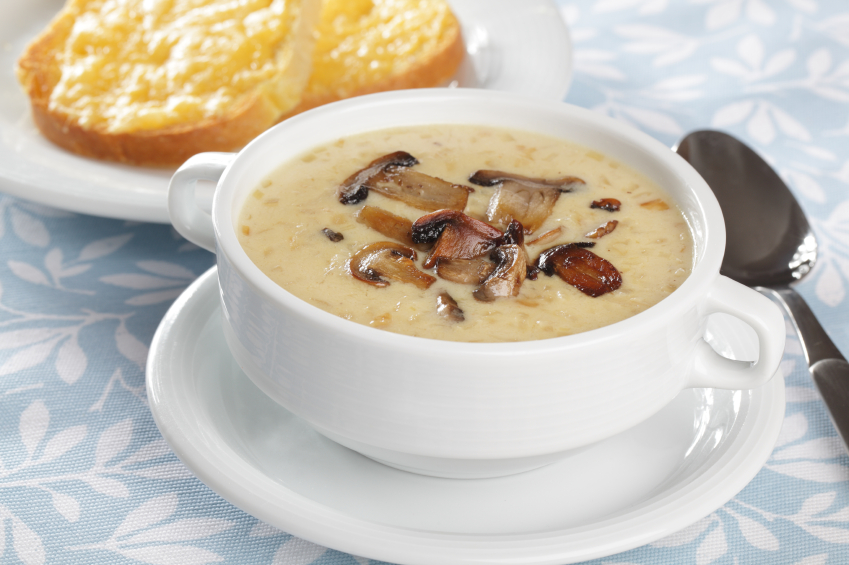 If you’re a fan of creamy soups, this mushroom and chicken concoction from Damn Delicious is a must-make recipe. It uses chicken thighs rather than breasts, which almost guarantees the poultry will stay juicy. Don’t feel like you have to limit yourself to cremini mushrooms. Any variety of fungi will work, so use whatever looks good at the store.

Directions: In a large Dutch oven or stockpot, heat oil over medium. Season chicken thighs generously with salt and pepper, add to pot, and cook until golden, about 2 to 3 minutes. Remove to a plate and set aside.

Melt butter in same pot. Stir in garlic, mushrooms, onion, carrots, and celery. Cook vegetables, stirring, until soft, about 3 to 4 minutes. Add thyme and cook, stirring, until fragrant, about 1 minute.

Sir in half-and-half. Cook, stirring occasionally, until just heated through, about 1 to 2 minutes. If desired, add more half-and-half. Season with salt and pepper. Serve garnished with parsley. 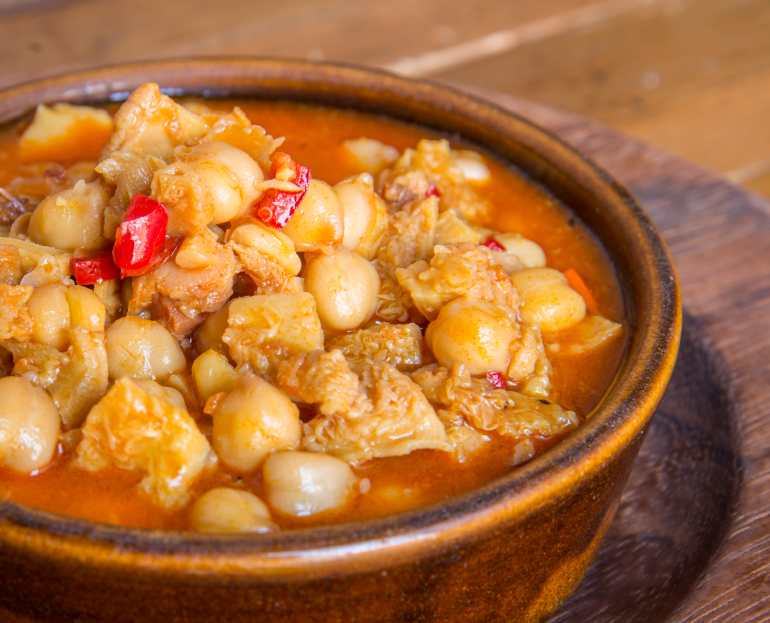 With loads of vegetables, poultry, and beans, this Moroccan Chicken and Sweet Potato Soup from Eating Well is about as healthy as a one-pot meal can get. Nutritional value aside, it also packs a serious dose of flavor thanks to cinnamon, cumin, and spicy harissa. If you have any other vegetables hanging out in your fridge, this recipe is a great way to use them up. Just chop the produce and add it to the pot along with the peppers and green beans.

Directions: Heat oil in a large pot set over meidum heat. Add onion and garlic. Cook, stirring occasionally, until softened, about 2 to 3 minutes. Add cumin, cinnamon, and cayenne. Cook, stirring, for 1 minute. Add broth and chicken. Cover, increase heat to high, and bring to a simmer. Uncover and cook, turning chicken occasionally, until an instant-read thermometer inserted into the thickest part registers 165 degrees Fahrenheit, about 20 to 22 minutes. Skim foam from surface while chicken cooks. Transfer chicken to a cutting board and let cool. Shred meat and discard bones.

Meanwhile, add sweet potato, bell pepper, and green beans to pot. Return to a simmer. Cook until vegetables are tender, 4 to 10 minutes. Stir in chicken, chickpeas, salt, and pepper. Cook until heated through, about 3 minutes longer. Remove from heat, stir in harissa, and serve.