Food companies — especially cereal and fast food — will do some pretty bizarre things to make a sale. From weird mascots (page 5) to mind-boggling commercials (page 10) to creepy animatronics (page 13), we take a look at some of the weirdest advertising gimmicks food companies use to market products, ahead. 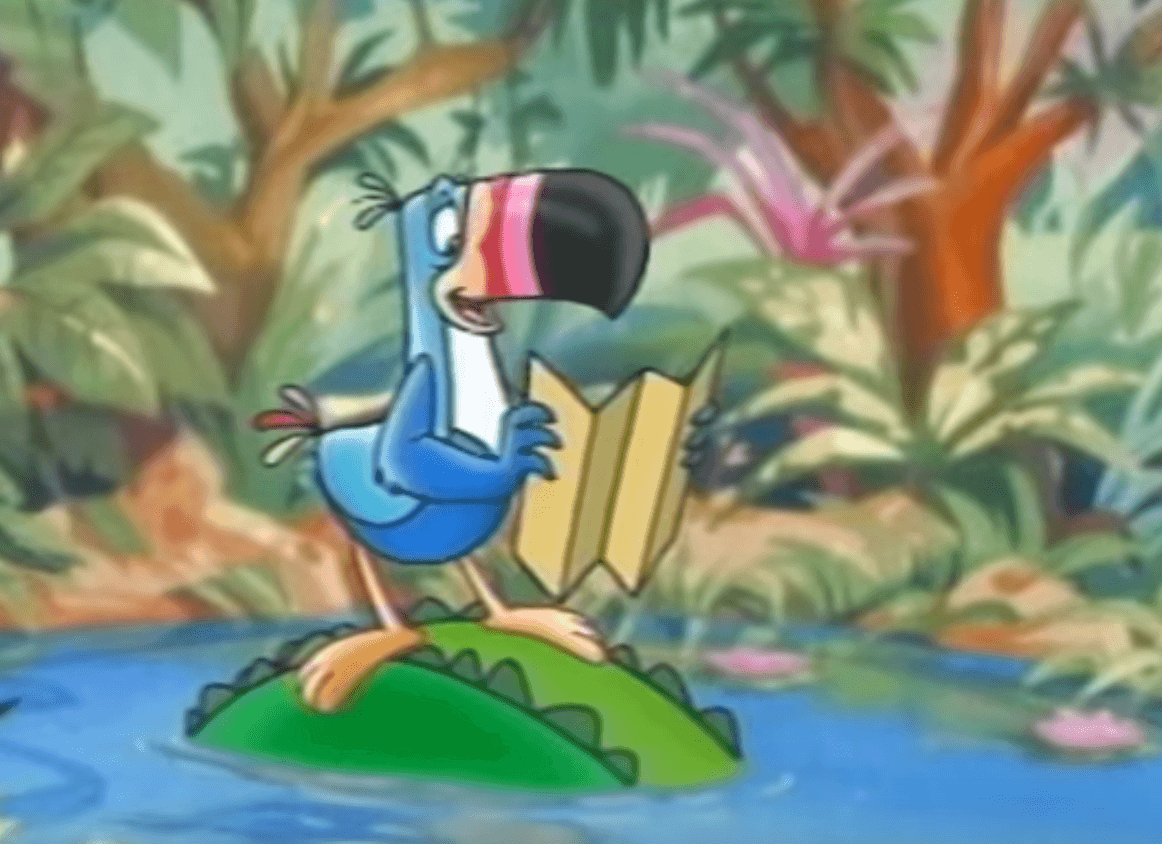 He was able to smell Fruit Loops miles away. | maxwell joseph via Youtube

What do toucans and Fruit Loops have in common? Aside from the faux tropical flavors infused in the sugary cereal, nothing. But, nonetheless, Toucan Sam loves to use his distinct sense of smell to guide him to a bowl of Fruit Loops (all while showing off his rhyming skills).

Next: Don’t you wanna, wanna Fanta? 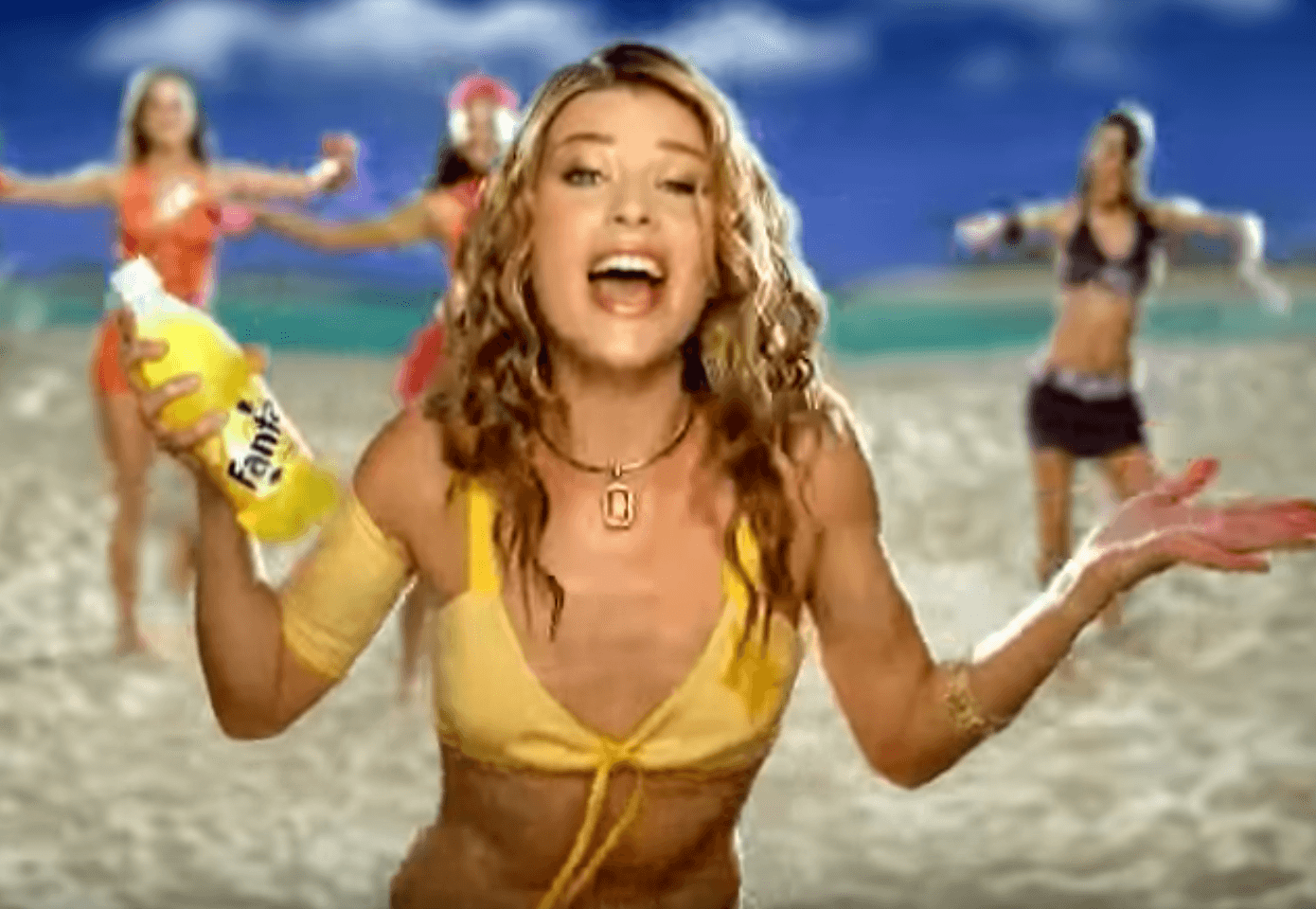 It was recently brought back. | Brian Friedman via Youtube

Another weird advertising gimmick? The Fantanas. Although they aren’t as creepy as some of the other mascots and tactics listed, they are a bit strange. Each woman represents a specific Fanta flavor and sings “wanna Fanta, don’t you wanna, wanna Fanta” over and over again.

The Fantanas went away for a bit, but have recently been brought back with a brand new cast. 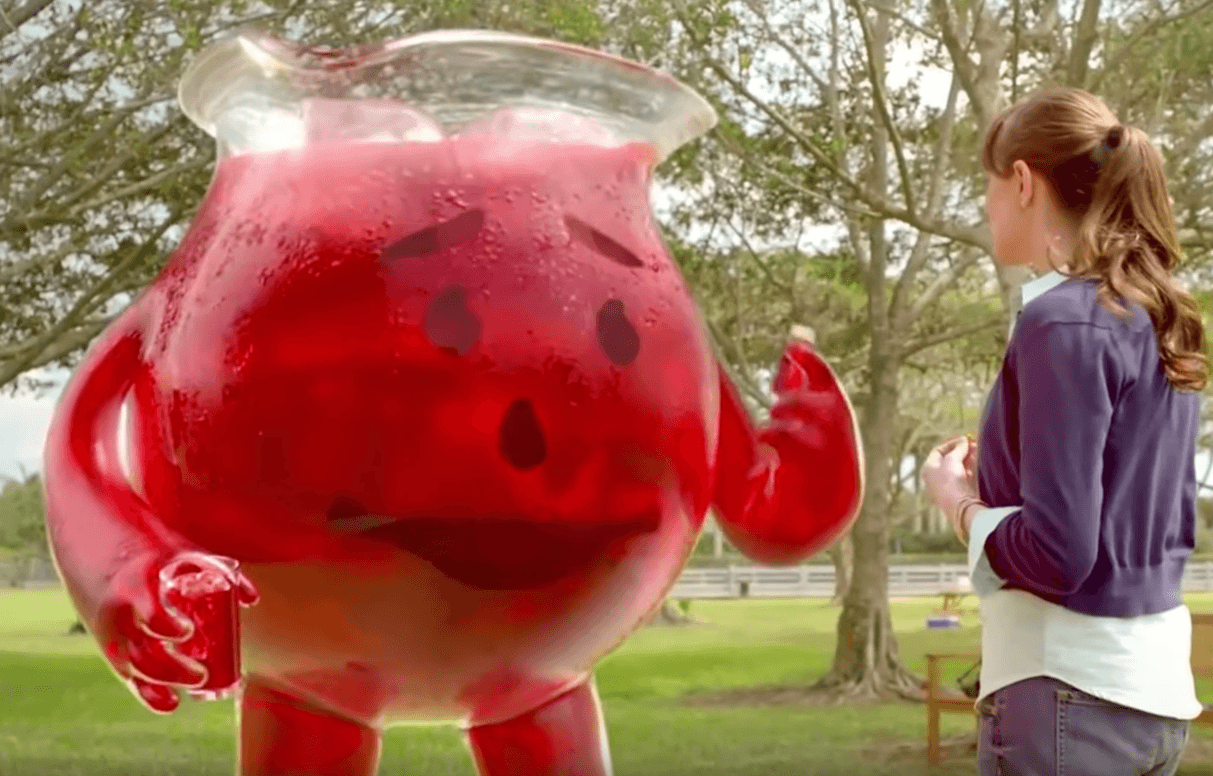 The Kool-Aid Man has clearly had too much Kool-Aid. Not only is his entire existence bizarre (a giant talking pitcher of Kool-Aid? Come on!) his ability to break through walls without shattering into a million pieces is false advertisement. Also, does anyone else get anxious when they see the Kool-Aid slosh around inside of him? How does he not spill?

Next: The worst advertising gimmick and best Halloween costume. 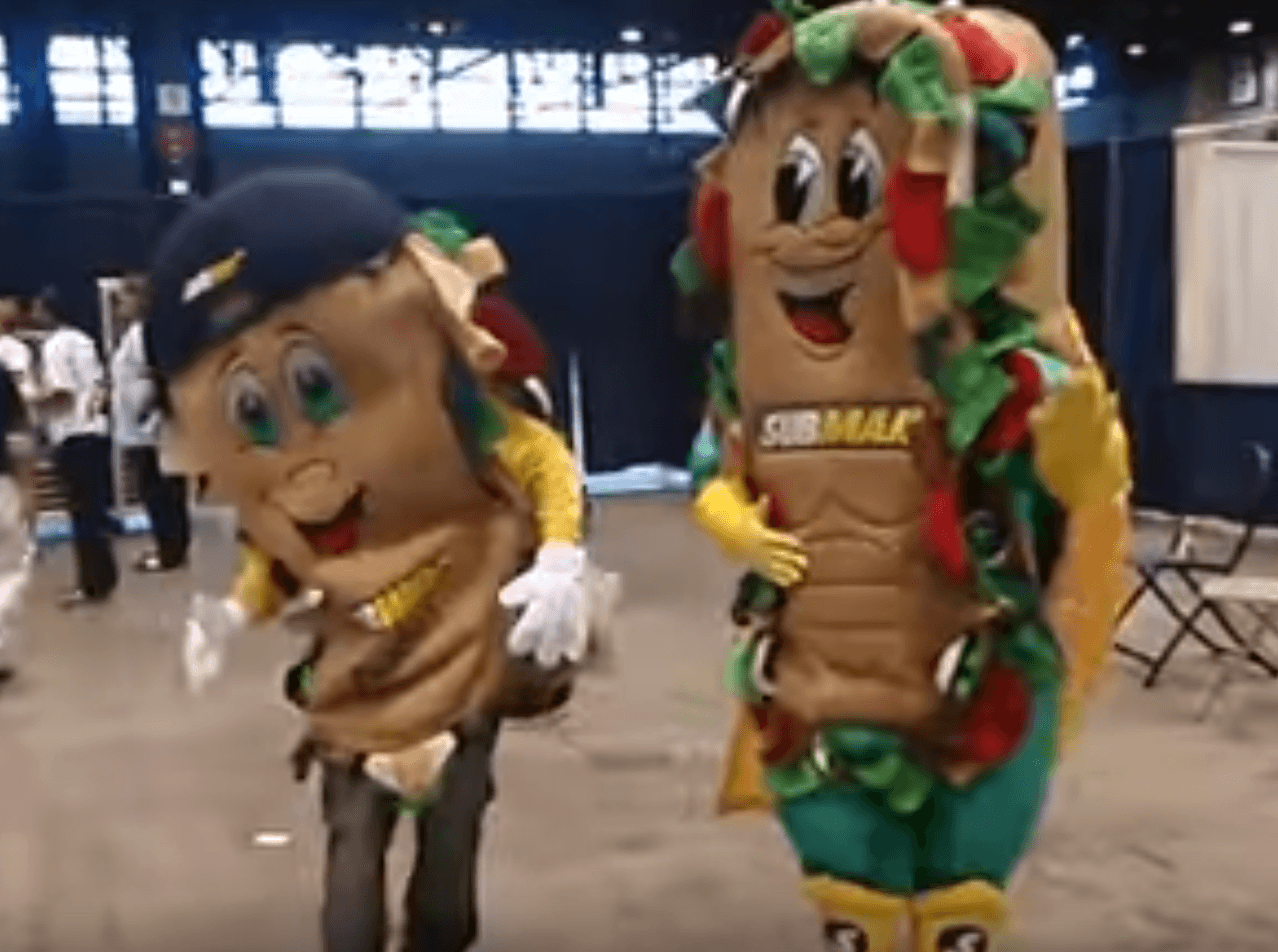 Because everyone wants their sandwich to have abs? | SyracuseSUBWAY via Youtube

Subway has participated in a number of weird advertising gimmicks, including the introduction of Subman — aka, a Subway sandwich with abs. Subway needs to stop telling people they will lose weight by eating nothing but 12-inch sandwiches.

Next: Is it just us or is this the creepiest mascot of all time? 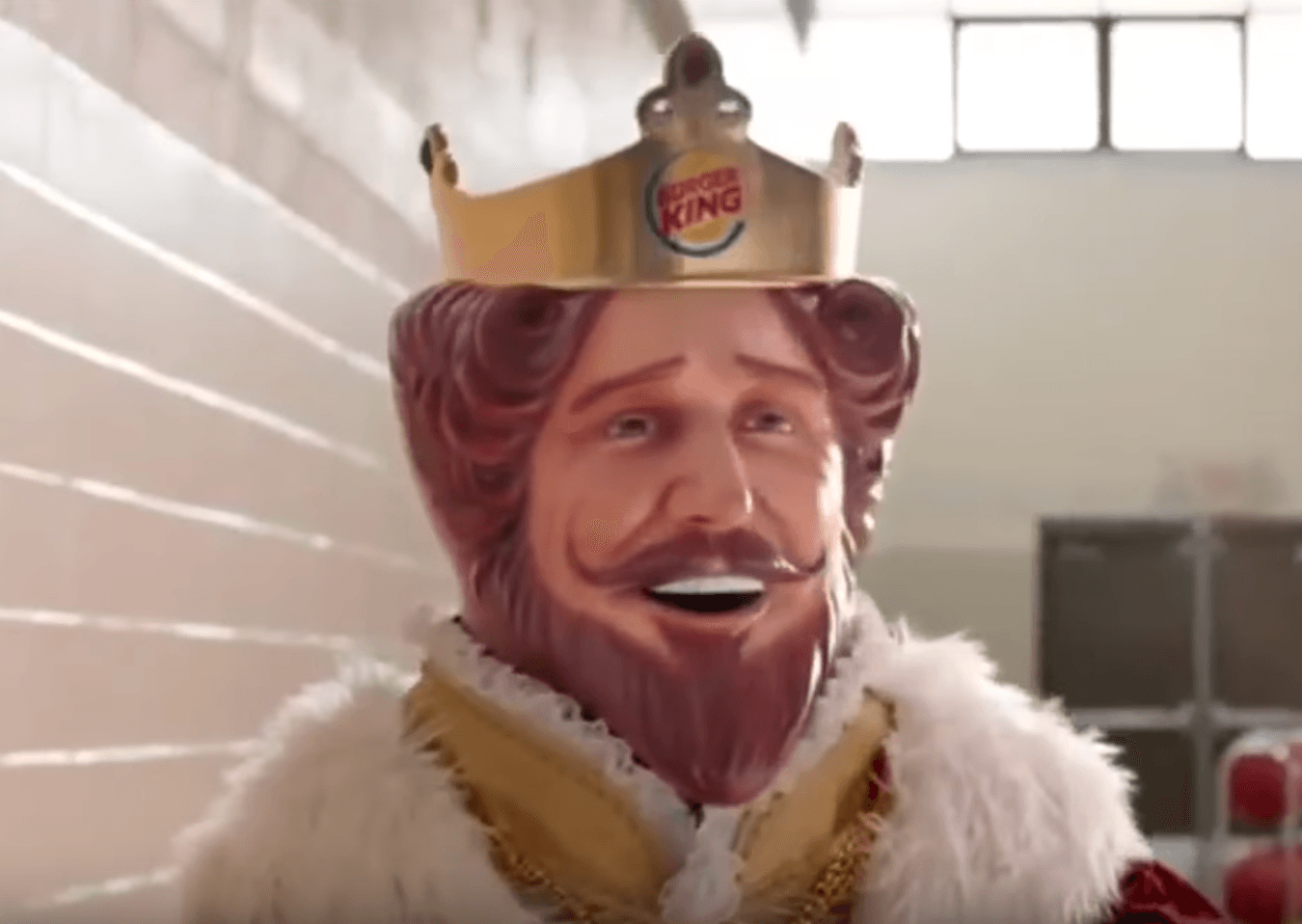 One look at Burger King’s mascot will leave you scratching your head. What is with the creepy mask? Why does he look more like a Halloween costume than a mascot? Is the joke on us? We honestly don’t know what to think about his royal creepiness.

Next: This rabbit has been trying to steal cereal for over 50 years. 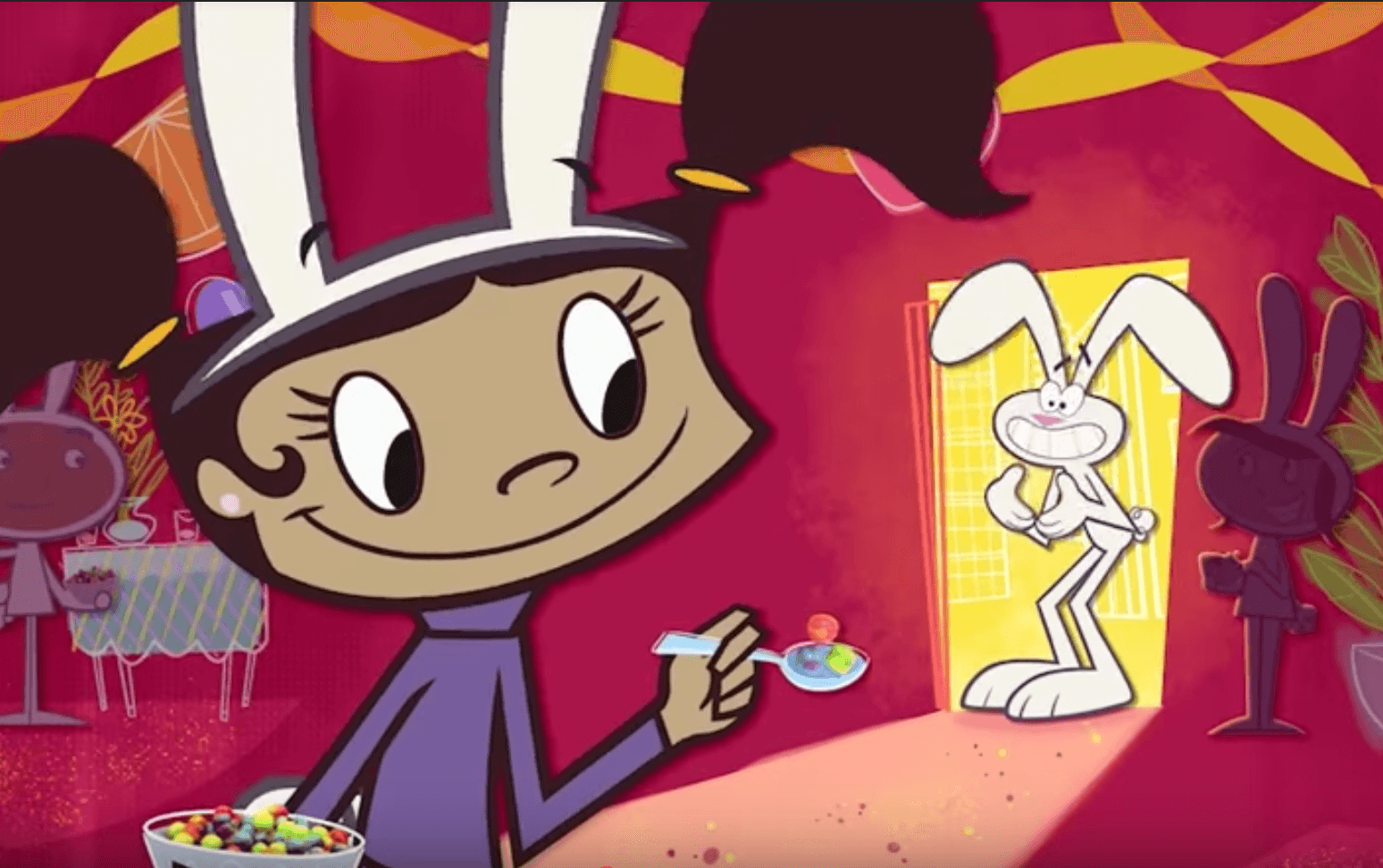 The commercials have been running for over 50 years. | Stinko Rama via Youtube

One way to market your product is to create a mascot that is obsessed with it. Case in point: The Trix Rabbit. Best known for trying to trick children into giving him a bowl of cereal, the silly rabbit has been scolded by children on national television for over 50 years.

Fun fact: The original Trix cereal was made up of 46% sugar. Talk about a well-balanced breakfast (not)!

Next: Buckets of chicken will never be the same. 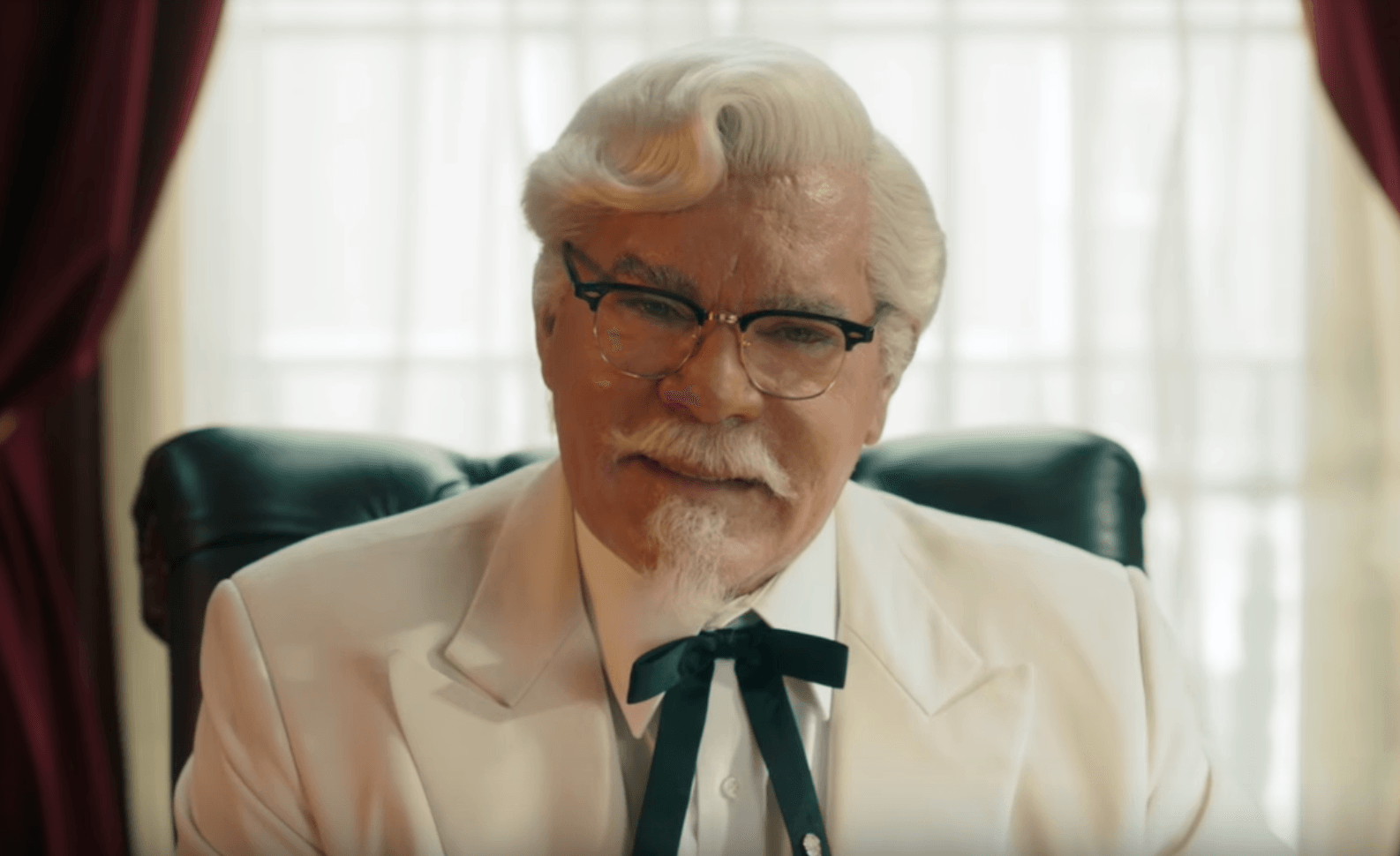 The poor Colonel has been turned into a creepy mascot. | KFC via Youtube

Being the face of your own company is totally normal. However, when your successors immortalize you by turning you into a symbol for buckets of chicken and hiring a variety of actors to play you in a commercial, a line must be drawn. Leave Colonel Sanders alone!

Next: This cereal mascot is the opposite of great. 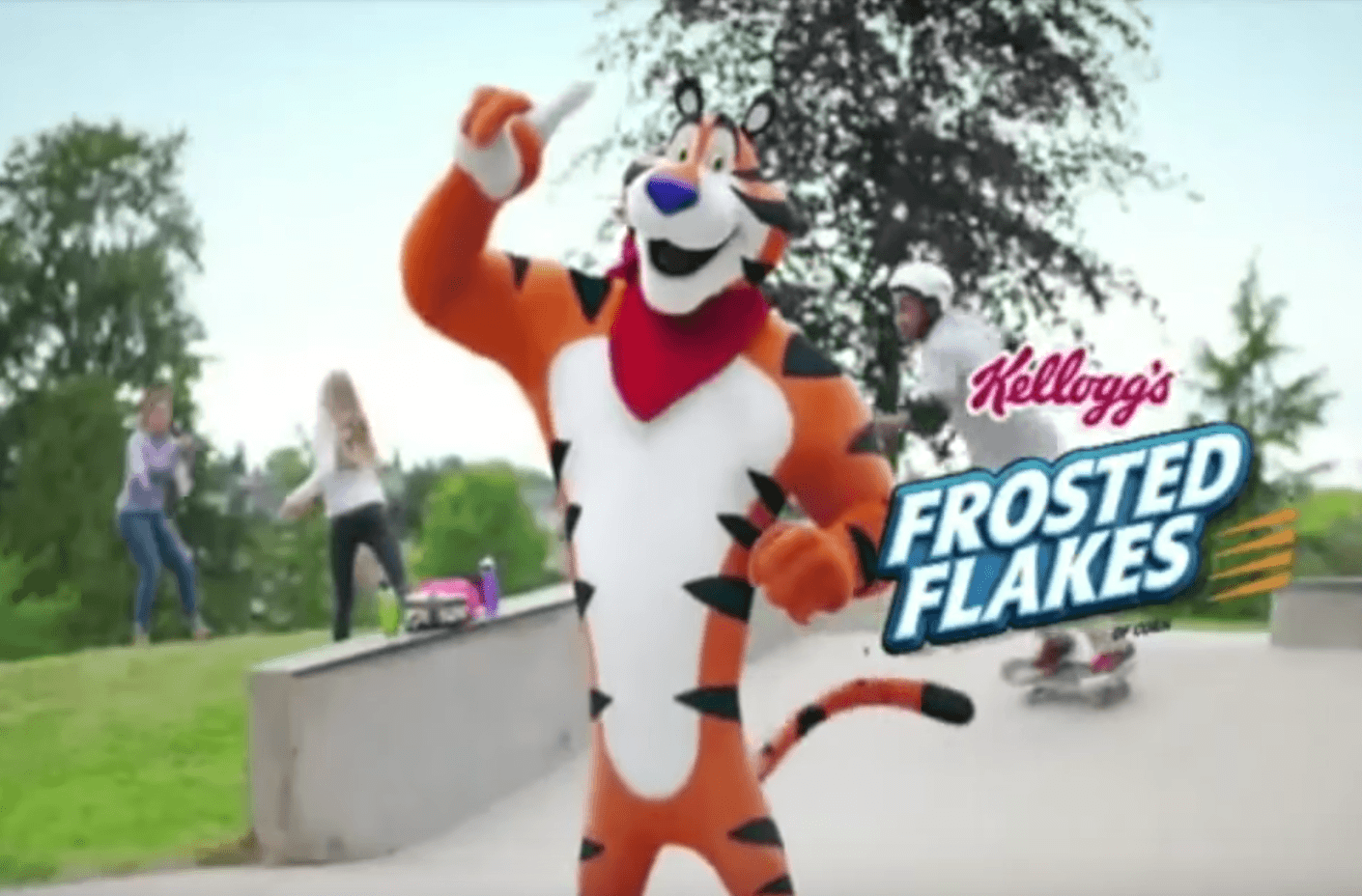 Tony the Tiger is all about spreading positive vibes and his love for Frosted Flakes. However, he’s a little too much like that one sales guy at Costco that won’t leave you alone. The kids may love his tactics, but us adults know he’s selling garbage.

Next: There has to be a better way to market raisins. 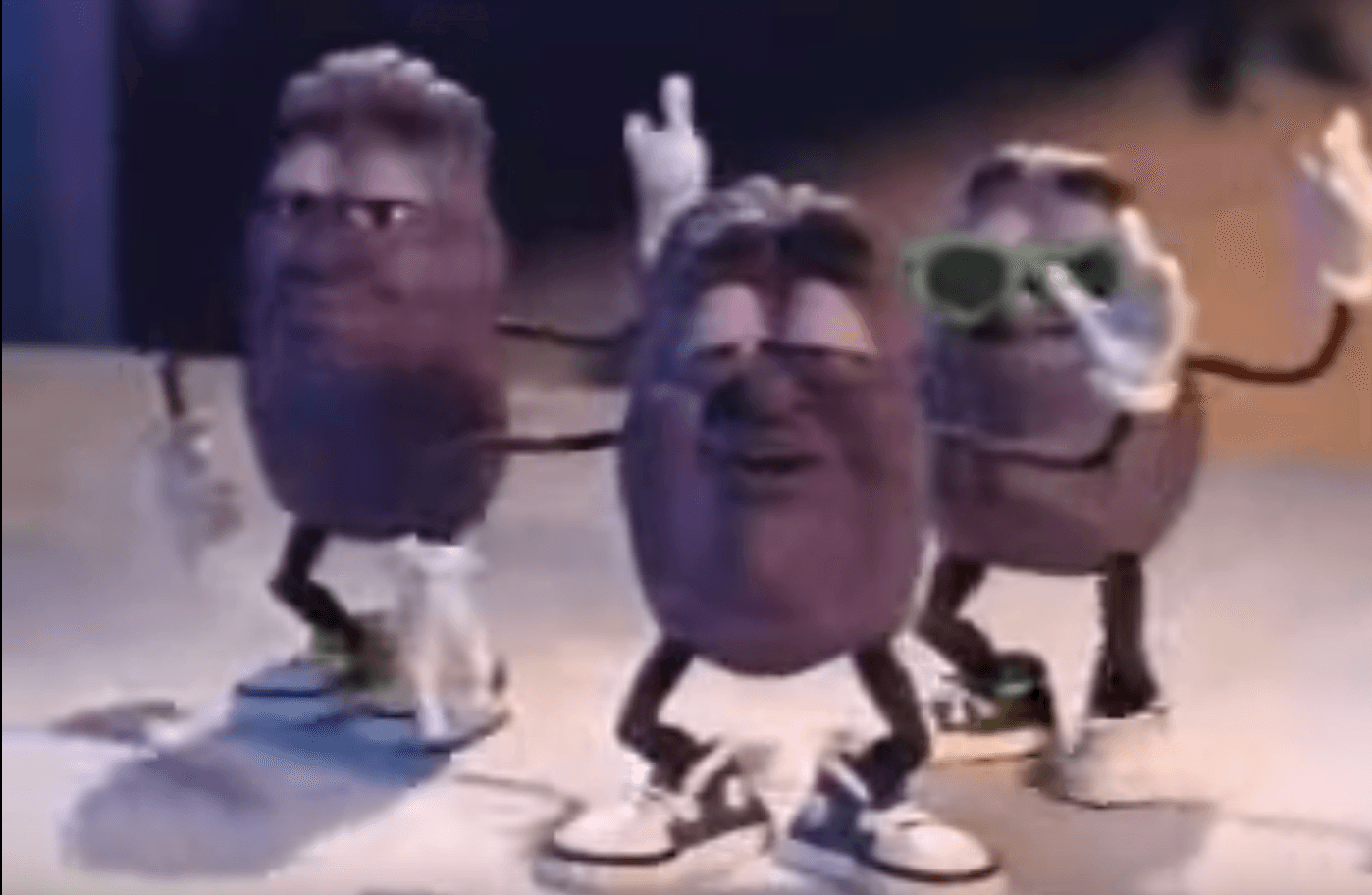 The California Raisins may have a dedicated fanbase, but that doesn’t take away from their creepy demeanor. The claymation characters look more like small turds that raided Mickey Mouse’s glove collection than animated raisins.

Next: Singing rodents is a great way to get someone’s attention. 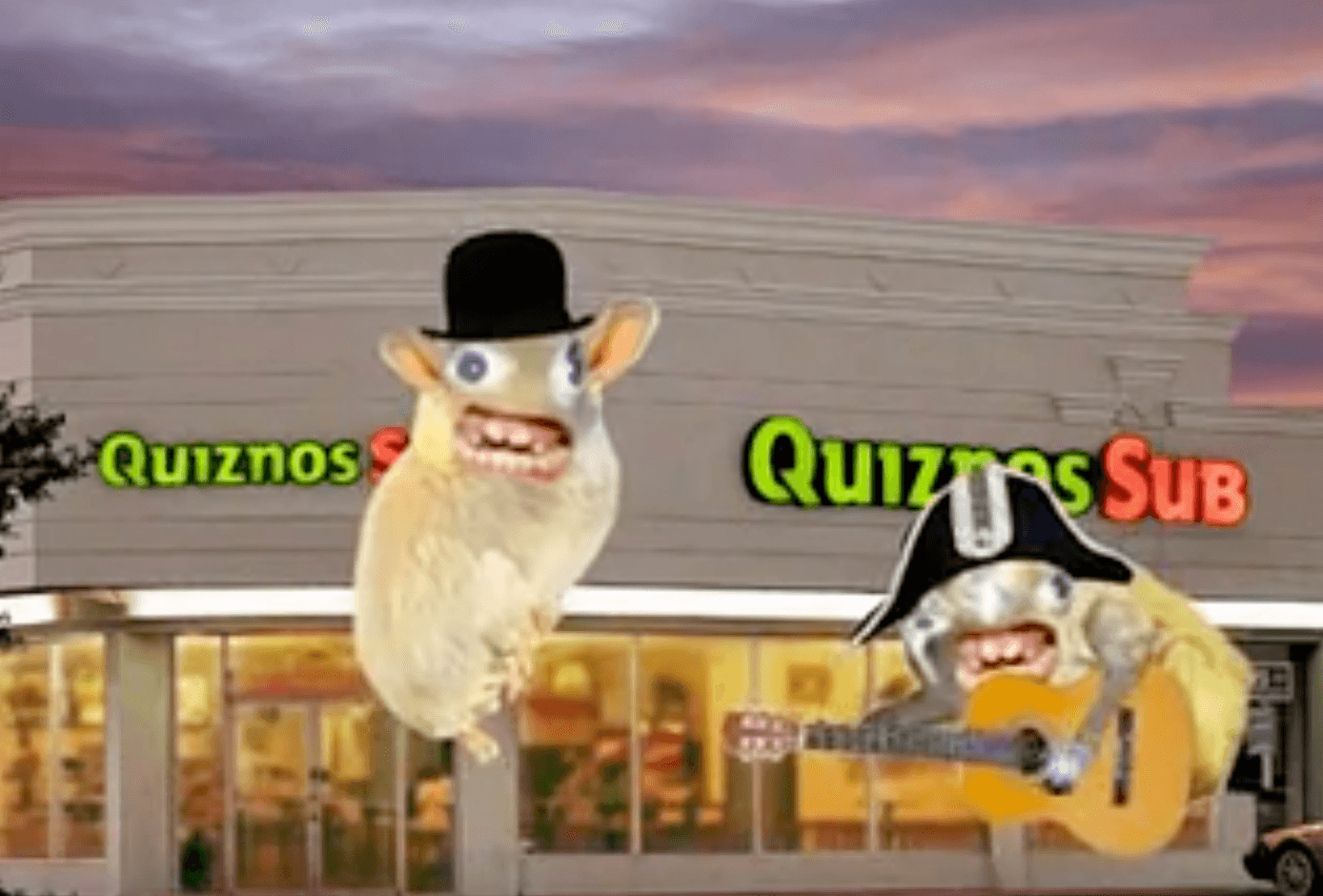 Who thought this was a good idea? | Tom Nash via Youtube

Marketing a food product with rodents is probably not the best idea, but Quiznos did it anyways with the Spongmonkeys. With human eyes and mouths — and a guitar in tow — the poorly animated mascots gained a lot of attention when they sang their hearts out about loving sub sandwiches in a national commercial. 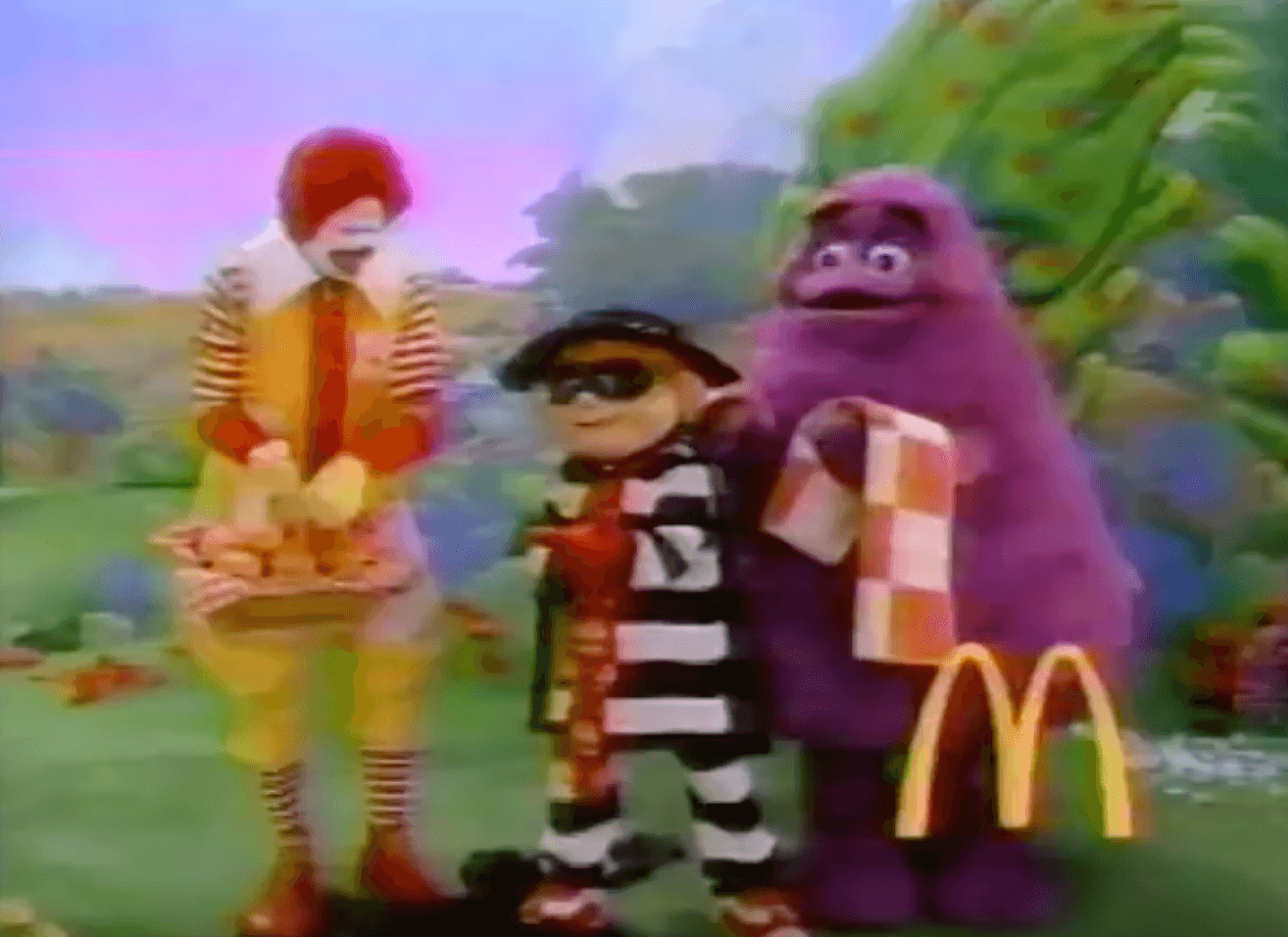 We don’t even know where to begin with this one. Not only does McDonald’s use a scary clown as its main mascot, it also utilizes an entire cast of fast food misfits — including, a purple taste bud-like creature known as Grimace — to market products to kids. They all live in McDonaldland and in our nightmares.

Next: If this guy says “dangerously cheesy” one more time … 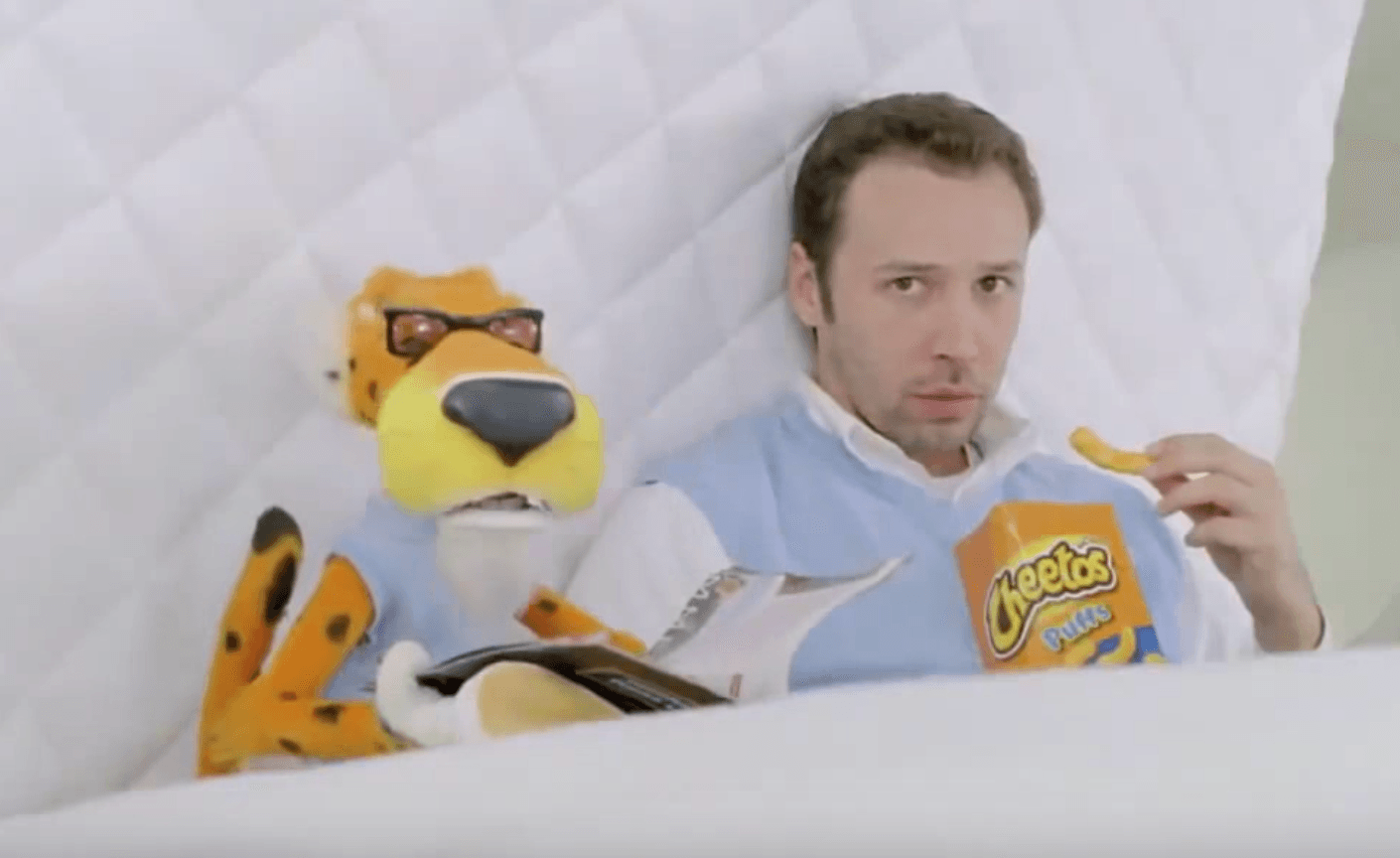 Something about animals obsessed with food is brilliant to ad execs. | Commercials Ads via Youtube

Another bizarre character used to market food? A talking cheetah dressed in nothing but sneakers and a pair of sunglasses, selling cheese covered puffs. Frito-Lay’s Chester Cheetah is the “dangerously cool” cheetah seen in Cheetos commercials and on Cheetos bags everywhere.

Next: Mickey, we aren’t in Disneyland anymore. 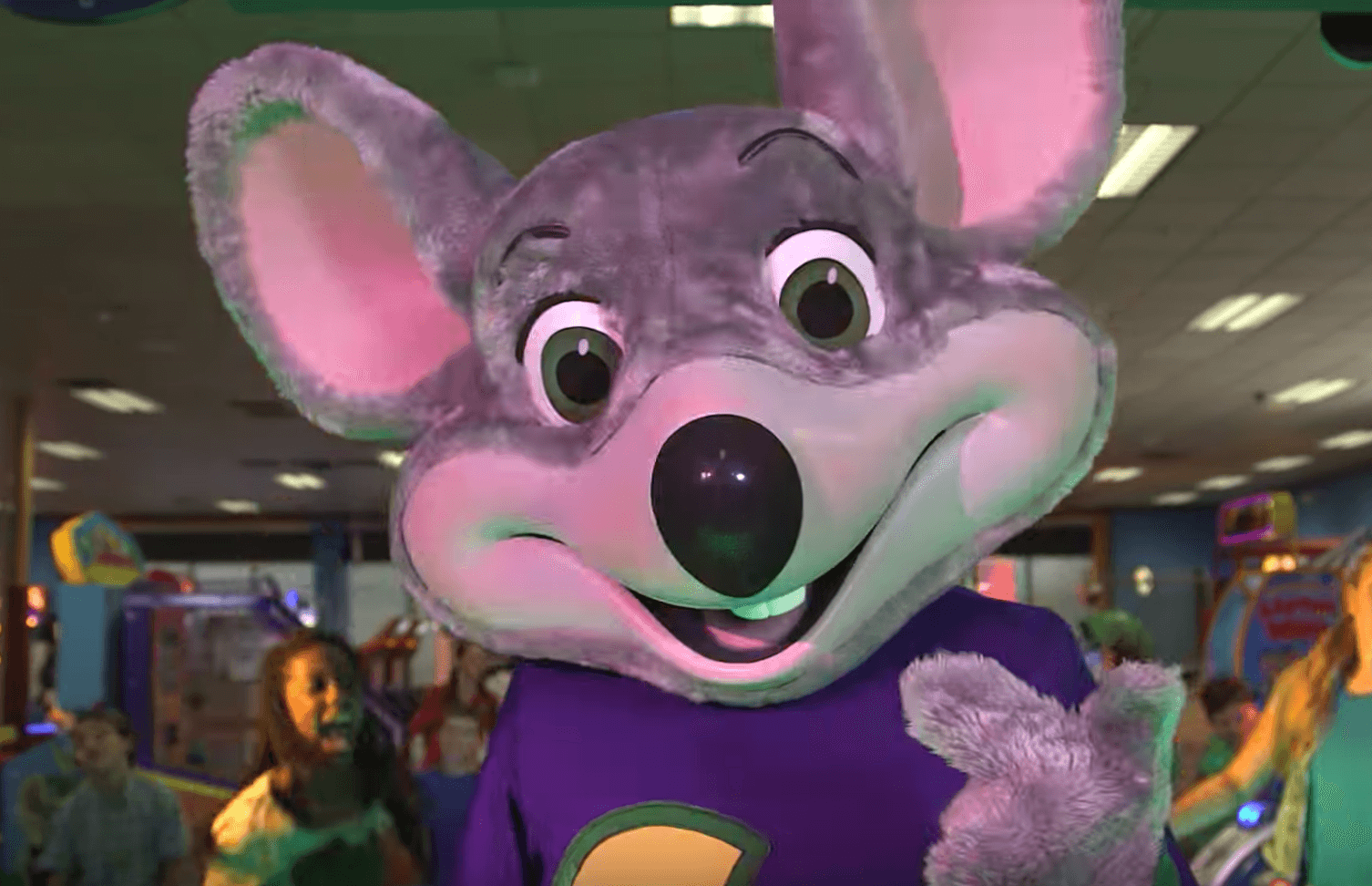 Chuck E. Cheese’s is a family-friendly restaurant and entertainment center known for it’s surprisingly good pizza, arcade games, and creepy mealtime show featuring the restaurant’s mascot, Chuck E. Cheese and friends. While using a mouse to market a product has proven successful in the past (cough, Disneyland, cough), this mouse — especially in animatronic form — is downright bizarre.

Next: A floating mouth sings about this popular movie theater candy. 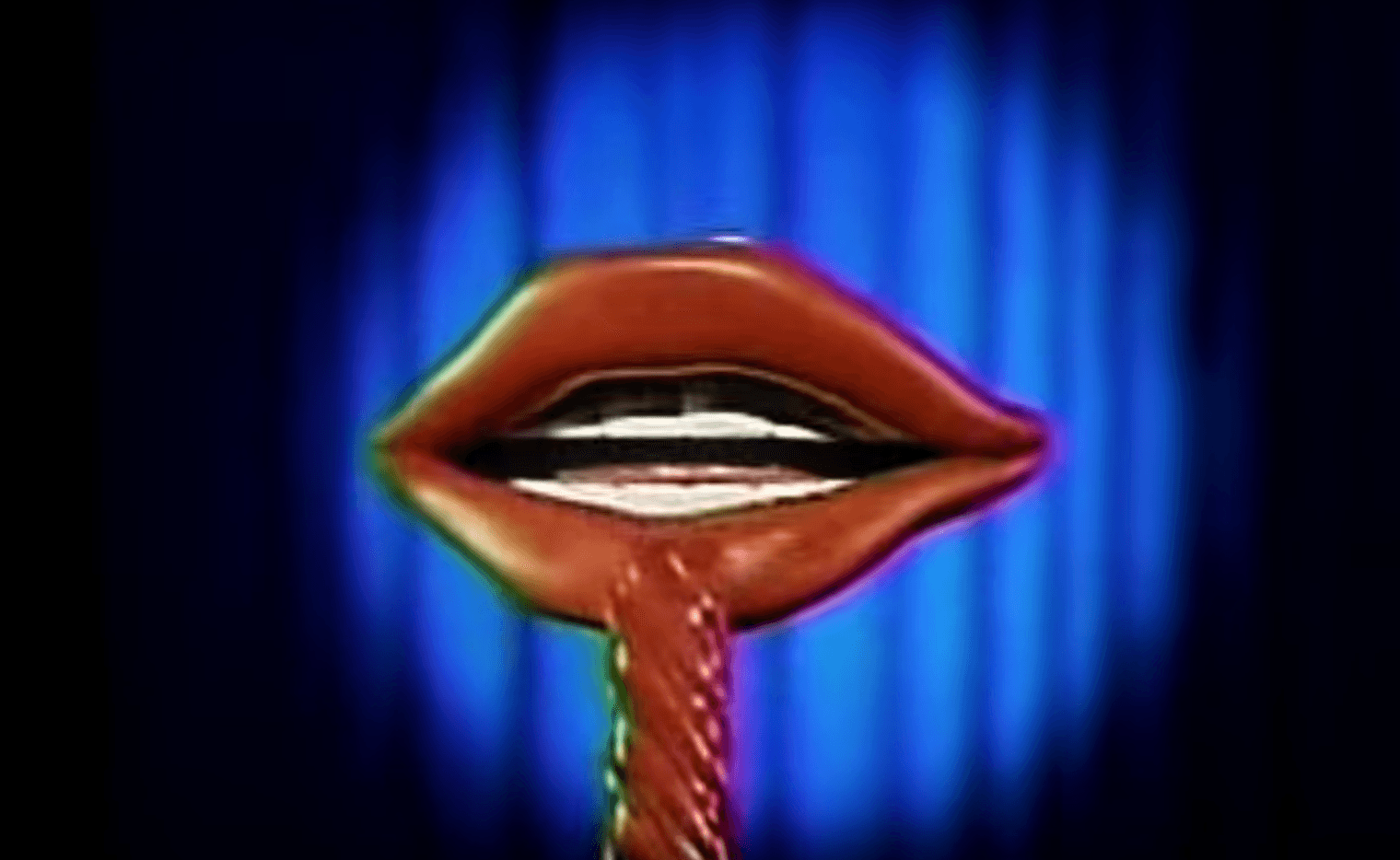 We will pass on this one. | RetroStatic via Youtube

What’s creepier than a faceless mouth singing and eating Twizzlers? Nothing. In the 1980s, Twizzlers thought it would be a good idea to market Red Vines’ biggest competitor with a floating claymation mouth that sang about how Twizzlers “makes mouths happy.” No thanks!

Next: What do you get when you cross a Jack-In-The-Box figurine with a human man? 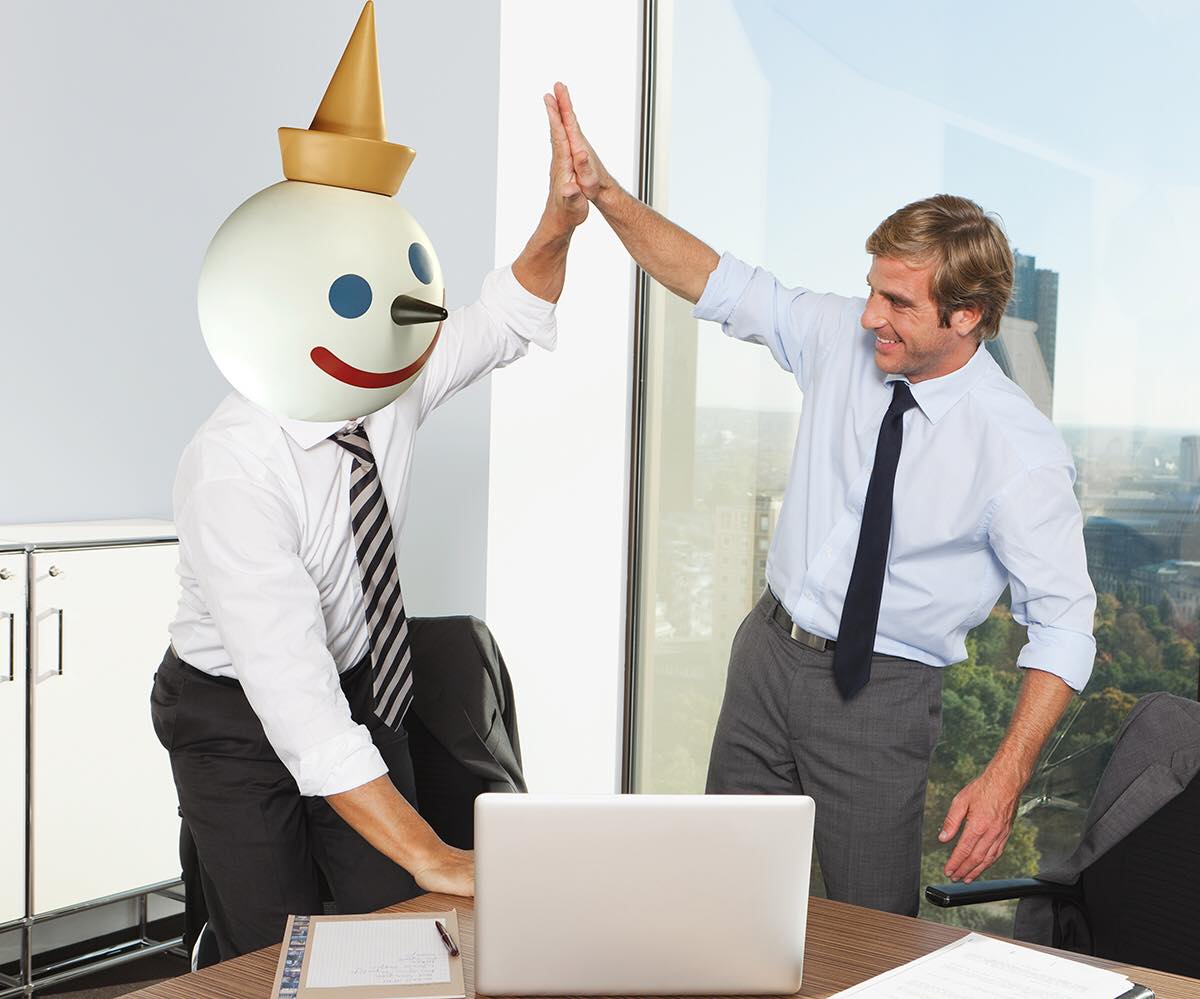 It’s super creepy. | Jack in the Box via Facebook

A cross between a Jack-In-The-Box figurine and human man, Jack in the Box takes the cake for one of the weirdest advertising gimmicks. Why does Jack need a human body? Why is he dressed like he works on Wall Street? We have so many questions.