These Are the Weirdest Snacks That People Eat Around the World

Everybody loves snacking between meals. Chips, popcorn, crackers — you have so many delicious options to choose among. But in other countries around the world, people eat snacks that would look very unfamiliar to most Americans. In fact, some of those snacks seem downright weird, especially the ones that involve seafood, insects, and strange combinations of familiar flavors.

Some of these snacks have grown popular among schoolchildren. But others are more commonplace among adults (and at bars). Read on to check out the weirdest snacks that people eat around the world. 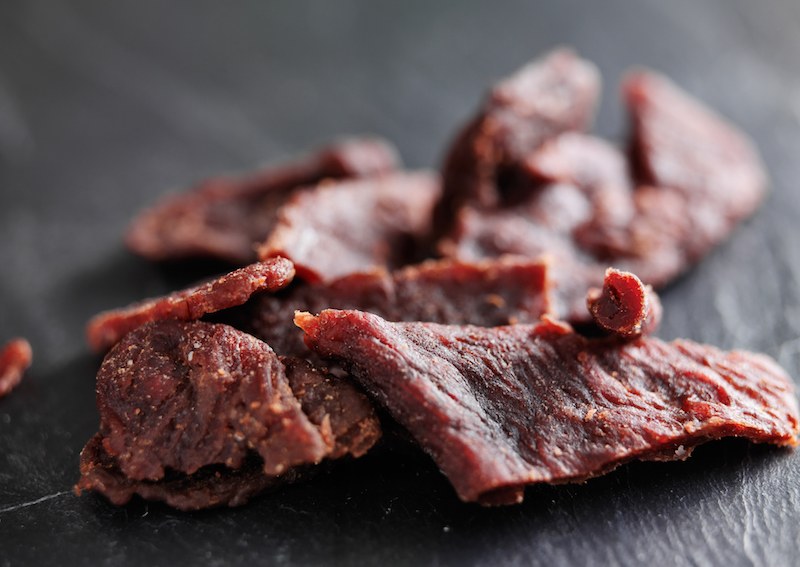 It’s like jerky but made of some very different meats than we’re used to. | Rez-Art/iStock/Getty Images Plus

Let’s start with biltong, a form of dried meat made from beef, shark, ostrich, or springbok (an antelope) in South Africa. Eater reports the name of this snack “comes from the Old Dutch for ‘a strip of rump’ or more literally, ‘buttock tongue.'” Despite the less-than-appetizing name, many South Africans love this snack.

It reportedly tastes something like salami. Unlike the beef jerky most Americans are familiar with, biltong gets cut much thicker. It’s also cured in vinegar and dry-air cured instead of smoked.

Next: People eat these surprising snacks with beer in Japan. 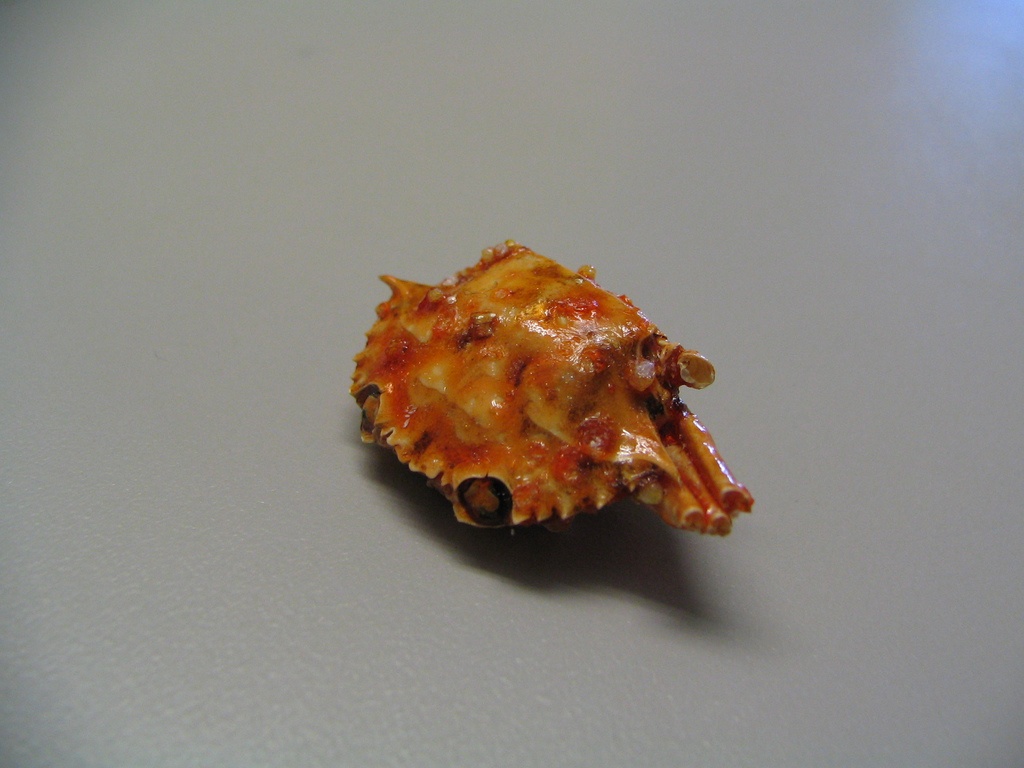 You’re eating the whole thing, shell and all. | Boris Mann/Flickr

Wanderlust nominates candied crabs, which you can find in Japan, as one of the strangest snacks around the world. Because we’re talking about eating miniature crabs, shell and all, we’re inclined to agree. These tiny, whole crabs get deep-fried and covered in sugar. They apparently pair quite well with beer.

Serious Eats reports this snack, called kanniko, benefits from the tried-and-true combination of salty, fishy, and sweet flavors. And the publication even nominates kanniko as the “crunchiest drinking snack ever.”

Next: In South Korea, people like to eat these weird snacks at movie theaters. 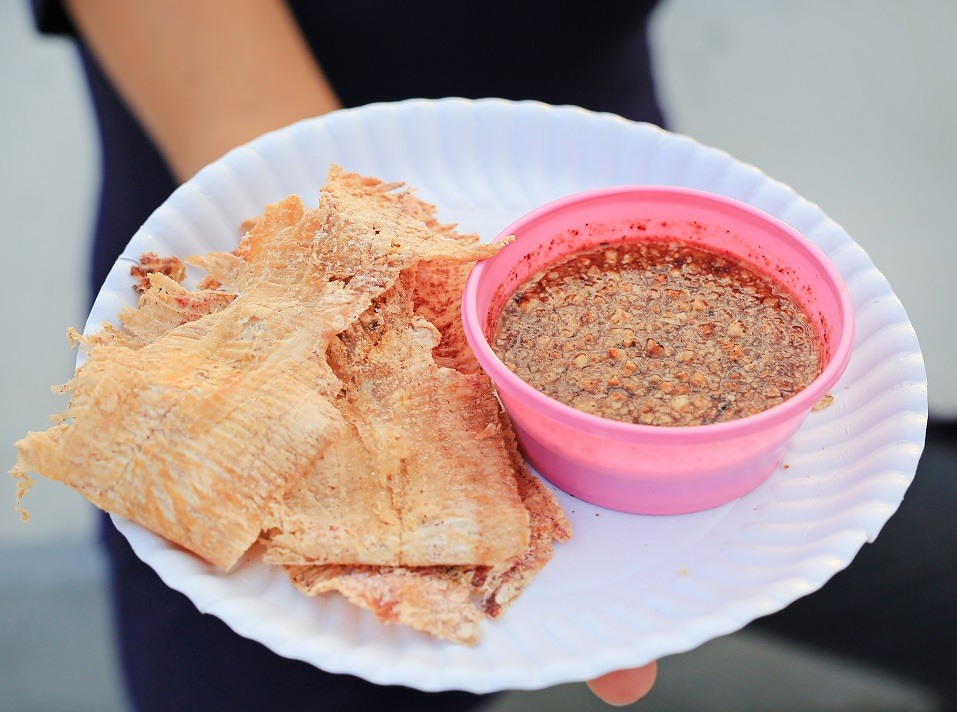 This is a common snack to have on a night out. | GOLFX/iStock/Getty Images

Wanderlust also counts dried cuttlefish, a popular snack in South Korea, as one of the weirder snacks you can find in other countries. (People reportedly even eat this snack at movie theaters, whereas Americans usually reach for popcorn or candy.)

Eater reports dried cuttlefish and squid are considered an “anju,” or food consumed with alcohol, in South Korea. And they’re called an “otsumami,” or small snack, in Japan. The cuttlefish or squid gets skinned, cooked, seasoned, salted, dried, cured, and shredded. Then, it gets seasoned and dried again. The result? A chewy snack that looks like a “light yellow fluffy haystack,” according to Eater.

Next: This unlikely snack has plenty of fans in Japan. 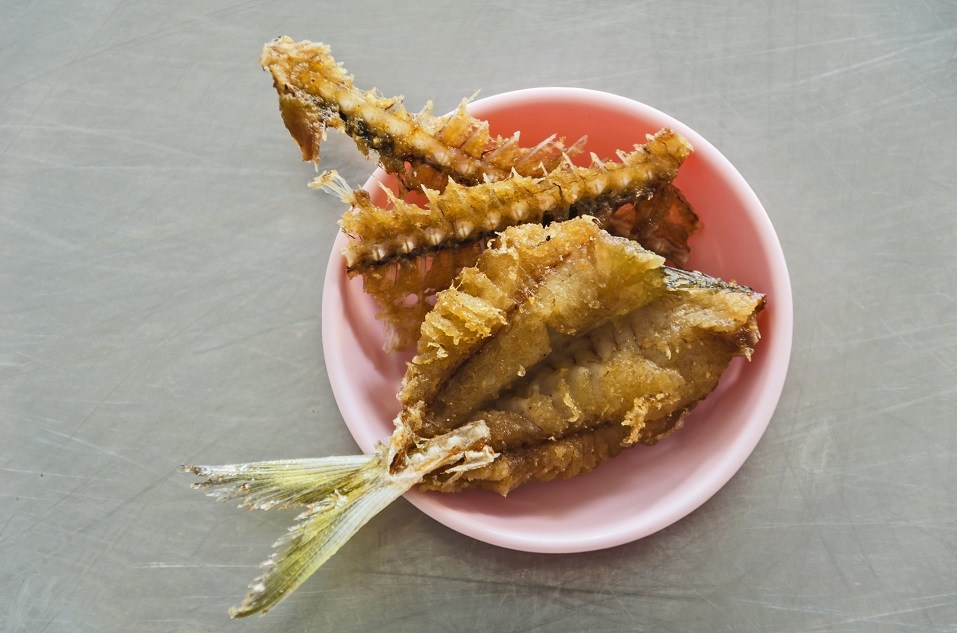 They eat them, bones and all. | lovelyday12/iStock/Getty Images

Serious Eats characterizes fried fish bones as one of the most common snacks — or bar foods — in Japan. This dish sounds pretty gross. But The Daily Meal reports this snack, known as Iwashi Sembei, typically bakes in soy and sugar. And Serious Eats reports, “Fried fish bones taste like what you imagine of thin and delicate bones: crunchy at the thick parts and crispy at the thin parts, with a slightly fishy flavor.”

The trick to making this snack extra delicious? Leaving some of the flesh on the bone. Then, it becomes crispy and brown, “sort of like the end of prime rib that taste like caramelized beef jerky,” according to Serious Eats.

Next: People in Cambodia consider these frightening snacks a delicacy. 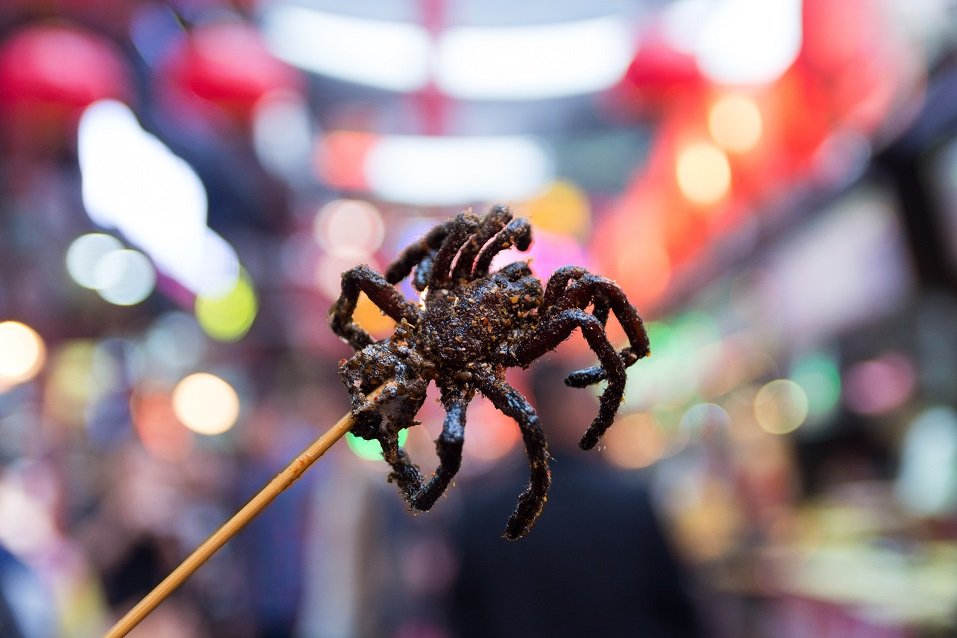 Wanderlust reports in Cambodia, many people enjoy snacking on fried tarantulas. And as The Daily Meal reports, it’s not just adults who enjoy this delicacy. Nor does the dish only appeal to tourists looking for a great Instagram shot. As the publication explains, “When we might crave candies and sweets, kids in Cambodia pop deep-fried tarantulas as addictive afternoon snacks.”

CNN Travel explains these snacks “are such a delicacy that large ones can sell for up to $1 each, a hefty sum in a country where minimum wage is about $6 a day.” Cambodians usually eat them at special events, such as birthday parties, where everyone has one or two.

Next: In Colombia, people love these creepy-crawly snacks. 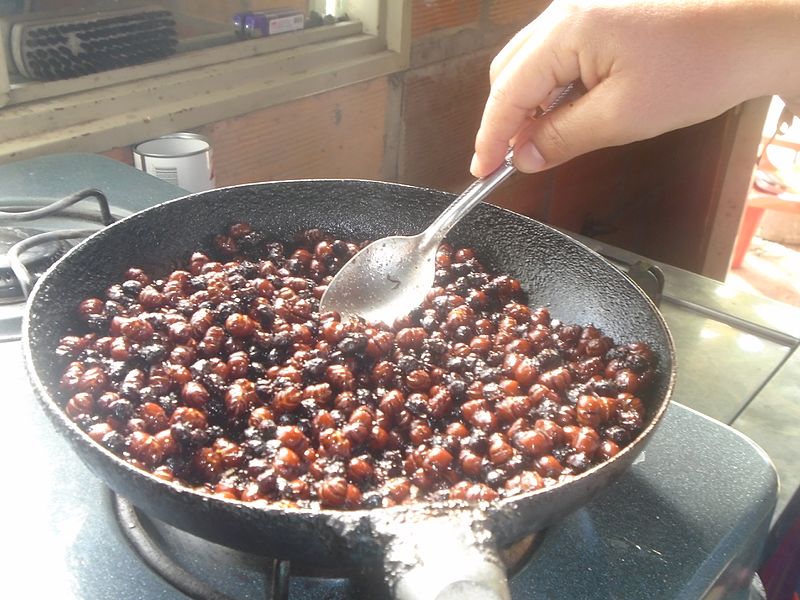 This is bound to make most people squeamish. | Jose Jr romero 2004/Wikimedia Commons

Business Insider counts hormigas culonas as one of the best — and weirdest — snacks you might encounter while traveling. Leafcutter ants, known colloquially as “big-bottomed ants” in Spanish, number among the traditional snacks served not only in Colombia, but across South America. The queen ants are farmed, soaked in saltwater, and then roasted.

According to Eat Your World, these snacks are actually pretty nutritious. They have a lot of protein and little saturated fat, and you can eat them either roasted or fried.

Next: Children in Israel love this salty snack. 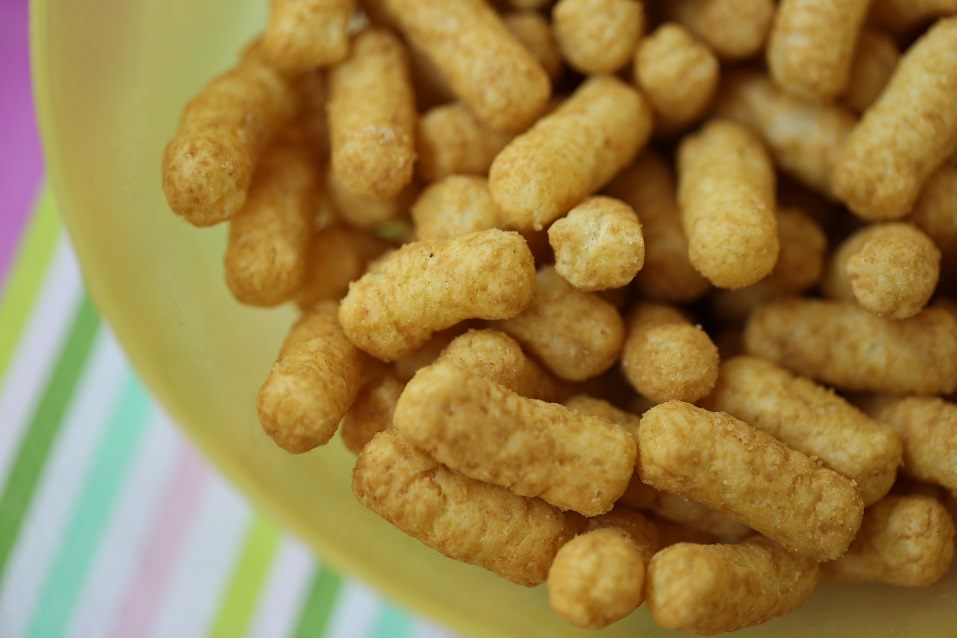 Bamba is a kids’ snack, according to Tablet. And Serious Eats describes it as addictive. “With each puff you crunch on, the saltiness builds,” the publication explains. “And there’s something wildly addictive about that.”

Next: In Britain, you can find these snacks at every pub. 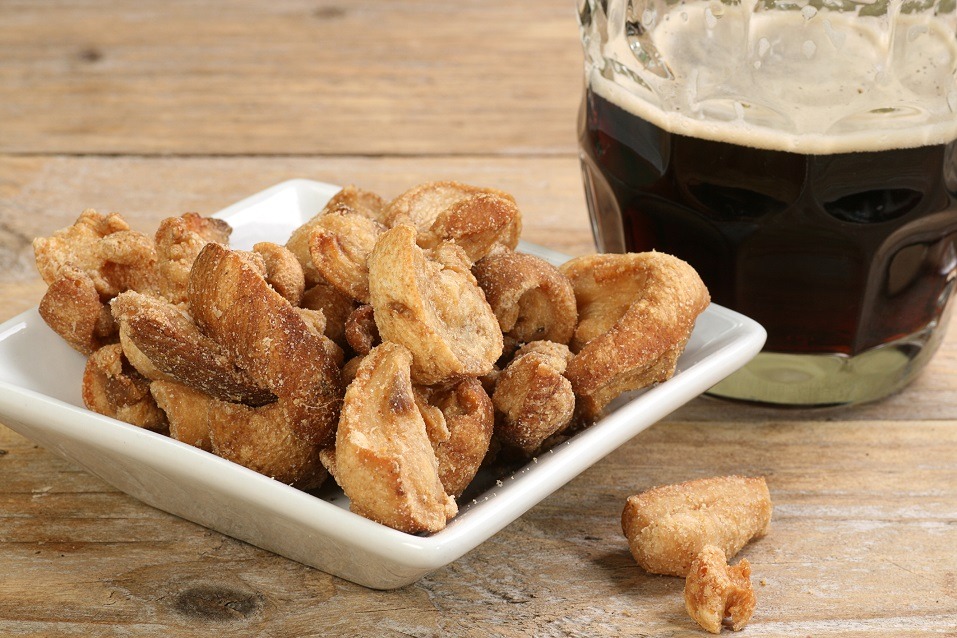 Eater reports pork scratchings are one of the snacks you can find at basically every pub and supermarket in Britain. The publication says pork scratchings are deep-fried, salted, crunchy pieces of pork rind that have a layer of fat still attached. “Similar to pork rinds (particularly popular in Southern states) and pork cracklings sold around the world (such as the chicharron for example), scratchings are usually smaller in size and harder, although some varieties can be puffy as well,” the publication explains. These snacks are eaten cold and have become a big part of British pub culture.

Next: This gross dish is one of the most iconic snacks in the Netherlands. 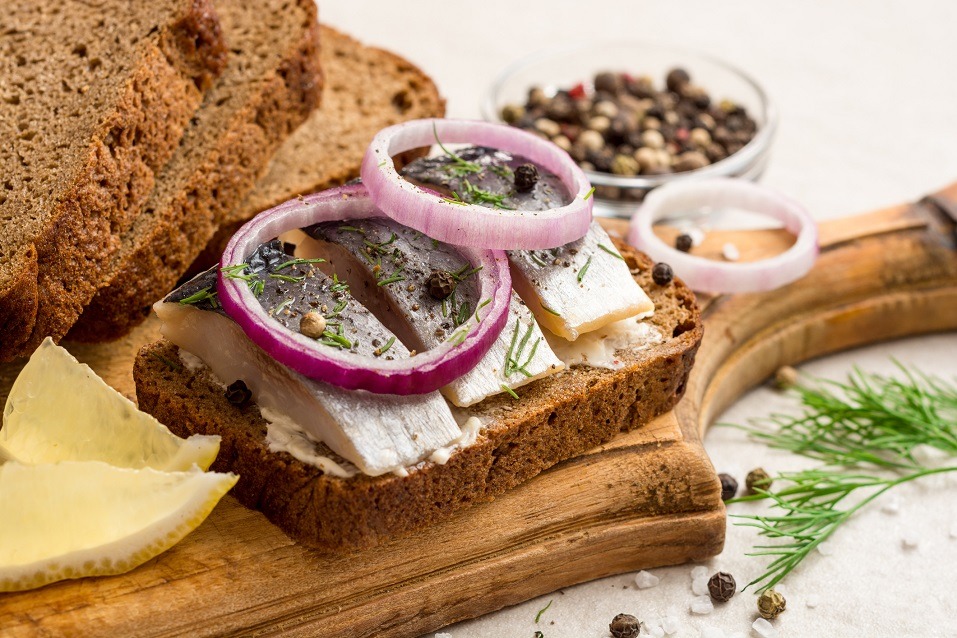 It doesn’t look particularly appealing, but it’s definitely not the weirdest on the list. | Andrey Zhuravlev/iStock/Getty Images

The Daily Meal reports in the Netherlands, a raw herring sandwich is an incredibly popular snack. The publication says the raw herring is served with pickles and raw onions in a hot dog bun.

The blog What’s Up With Amsterdam notes raw herring isn’t technically raw, as it’s been frozen and then laid in salt. You can eat it on a sandwich. Or you can eat in the traditional way: holding the fish by its tail, dipping it in onions, and sliding it into your mouth. At least it’s not quite as gross as some of the deadly foods that people eat around the world.

Next: People love this strange snack in China. 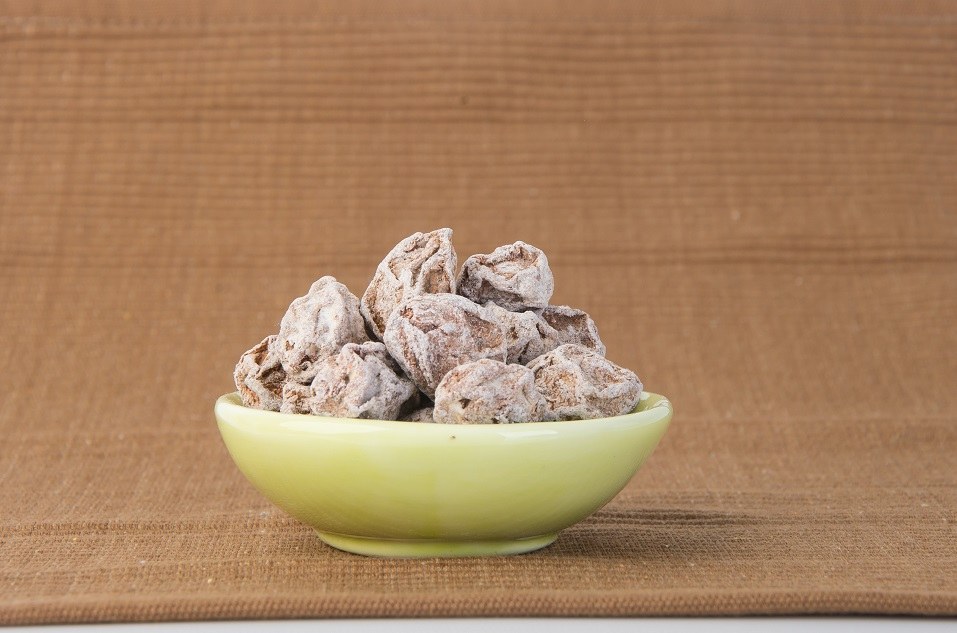 It’s one of those snacks that plays with different flavor combinations. | heinteh/iStock/Getty Images

According to Wanderlust, salted plums are a popular snack in China. Dried plums sound like pretty strange snacks, but this food seems to have quite a few fans. The taste of a salted plum reportedly oscillates between sweet and tart, and the beige plums come covered in sugar crystals. Traditionally, these snacks were scented with licorice, and the ones you can buy today in China (or even in the United States) are sometimes flavored with lemon juice, anise seed, cloves, or even cinnamon.

Next: Even children love these surprising snacks in Finland and beyond. 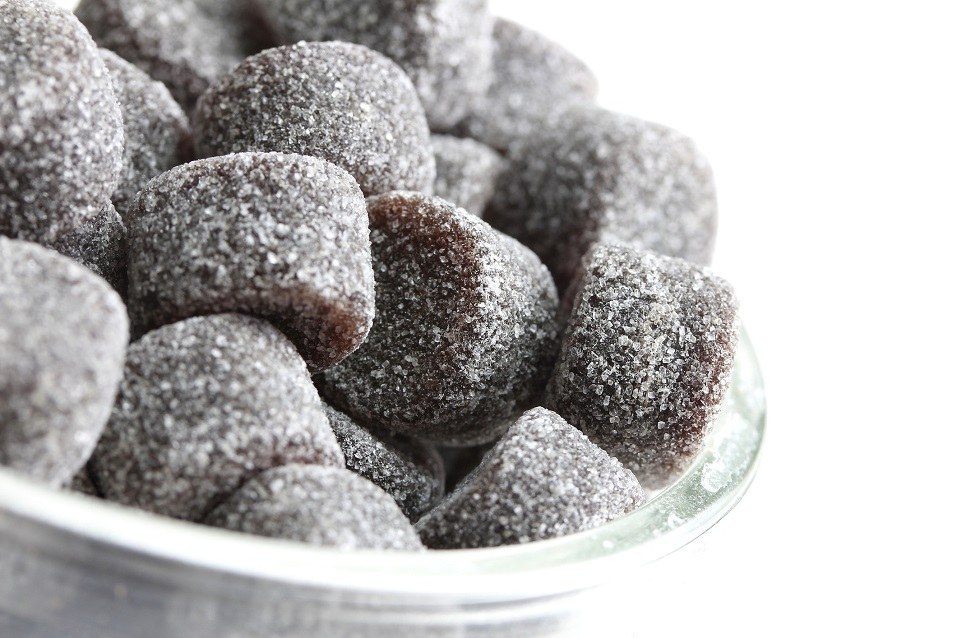 First We Feast reports that Salmiakki, or salty licorice, “takes the beloved salty-sweet combo and cranks it up to 11. Salmiakki candy is a super salty licorice that makes Haribo look like child’s play.”

According to BBC News, “Salty liquorice is an acquired taste — and many in Finland, Scandinavia and the Netherlands learn to love its sharp, sour flavours during childhood.” But for everybody else? This might not be one of the snacks to which you’d immediately warm up.

Next: These snacks have grown incredibly popular in many Asian countries. 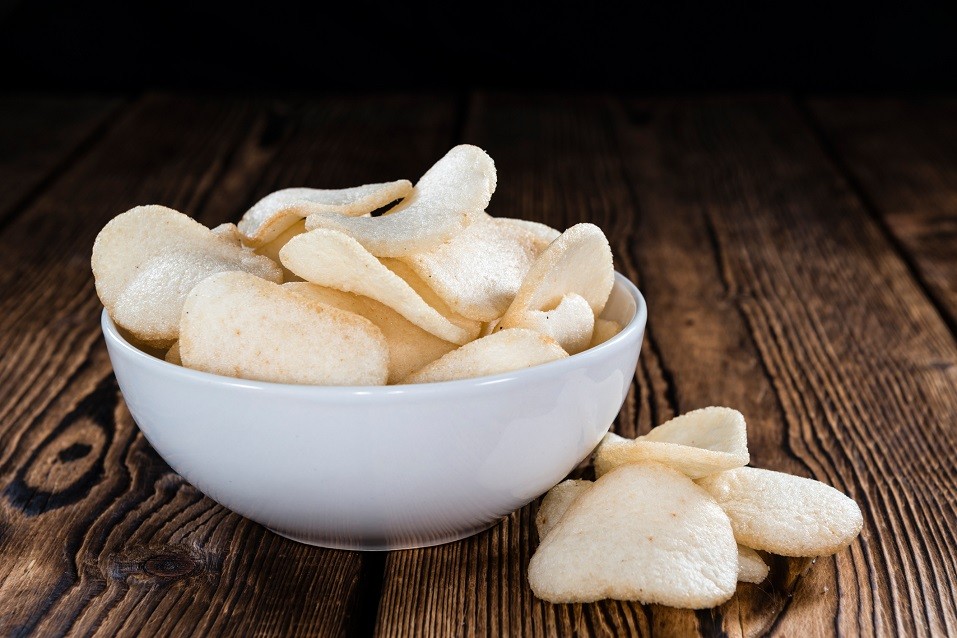 Shrimp chips are a popular snack in many countries across southeast and east Asia. And as Serious Eats reports, you can find them in a variety of shapes (ranging from french fry-like to puffed discs). They also come in flavors, including shrimp, crab, and lobster. Some hail from Japan, others from Indonesia, and still others from South Korea, Malaysia, and Taiwan.

Seafood-flavored chips definitely sound like some of the weirder snacks you could reach for between meals. But even in the United States, many people seek them out at Asian markets — or even prepare them at home.

Next: People in Nicaragua love this snack, even though the government outlawed it. 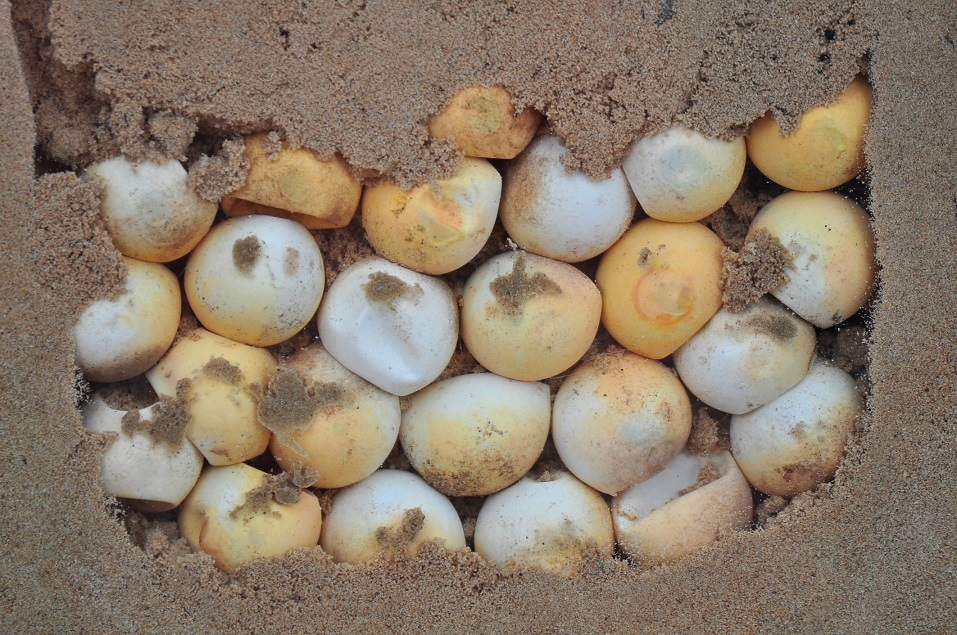 It’s not good for the environment and has been banned. | antpkr/iStock/Getty Images

The Daily Meal reports in Nicaragua, many people like to snack on sea turtle eggs. The publication explains of this unique snack, “Roughly the size of ping pong balls, they are boiled before they’re torn open just slightly at the top, so you can suck the liquid out. Then, you peel back the shell further to expose and eat the soft yolk.”

The government recently declared eating sea turtle eggs illegal. Yet it’s reportedly still quite ubiquitous. Not everybody likes these snacks, especially because the eggs are eaten nearly raw. Plus, consuming them is pretty environmentally irresponsible — which makes it even weirder that this banned food numbers among Nicaragua’s popular snacks.

Next: These snacks may be more Russian than borsch. 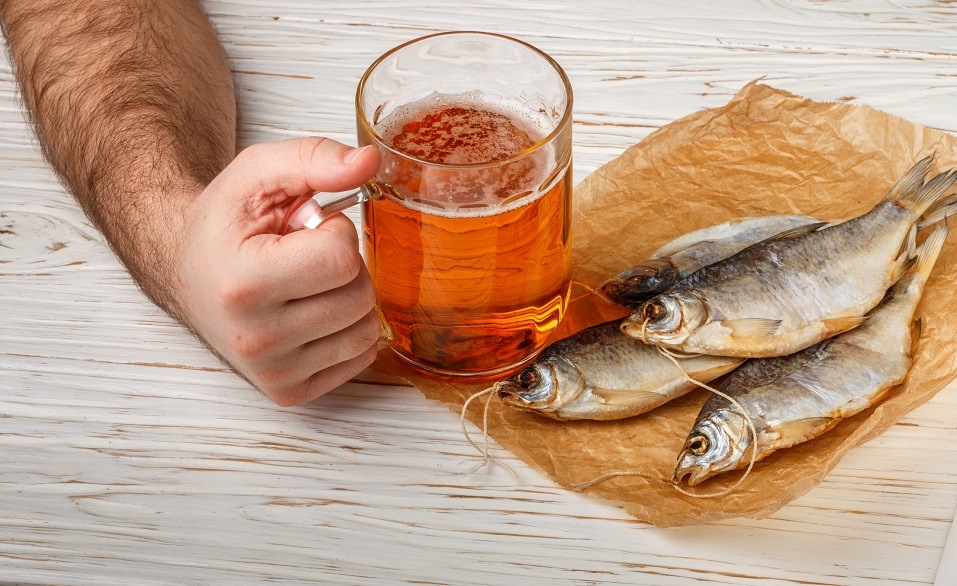 It’s been popular since the 19th century. | La_vanda/iStock/Getty Images

Eater reports vobla is even more Russian than borsch, beef stroganoff, and caviar. This snack — the “most popular and the most cherished traditional snack that accompanies beer” — serves as the Russian version of fish jerky. The name “vobla” technically only applies to jerky made from the Caspian roach. But any other freshwater fish that’s been salted and dried also tends to go by that name. Vobla has been popular since the 19th century. But commercially prepared and packaged versions only began to appear in the 1990s.

Next: This gross snack offers an authentic taste of Australian cuisine. 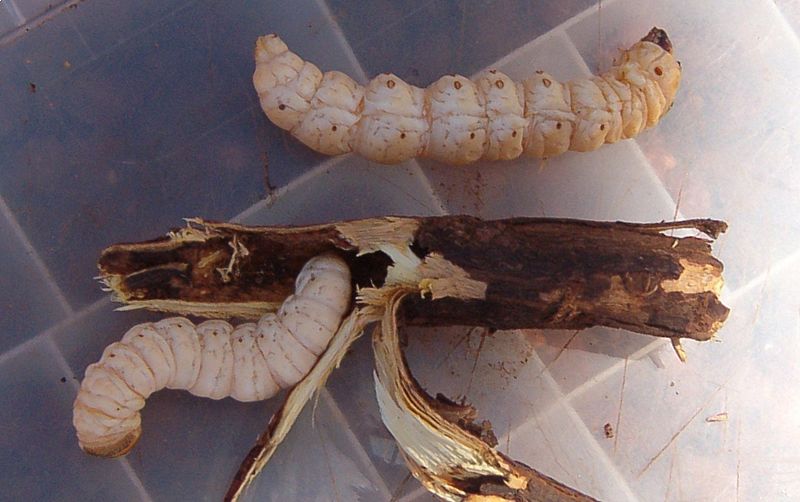 Business Insider counts witchetty grub as one of the best snacks around the world. But we have to add we wouldn’t blame you if you think it probably numbers among the weirdest, too. The publication characterizes these moth larvae as “the most authentic bush tucker snack.” In fact, indigenous Australians consider the cooked grub a delicacy. And, improbably enough, this snack reportedly tastes like scrambled eggs. You just might want to close your eyes if you give it a try.