What a Comic Book Can Tell You About Beer 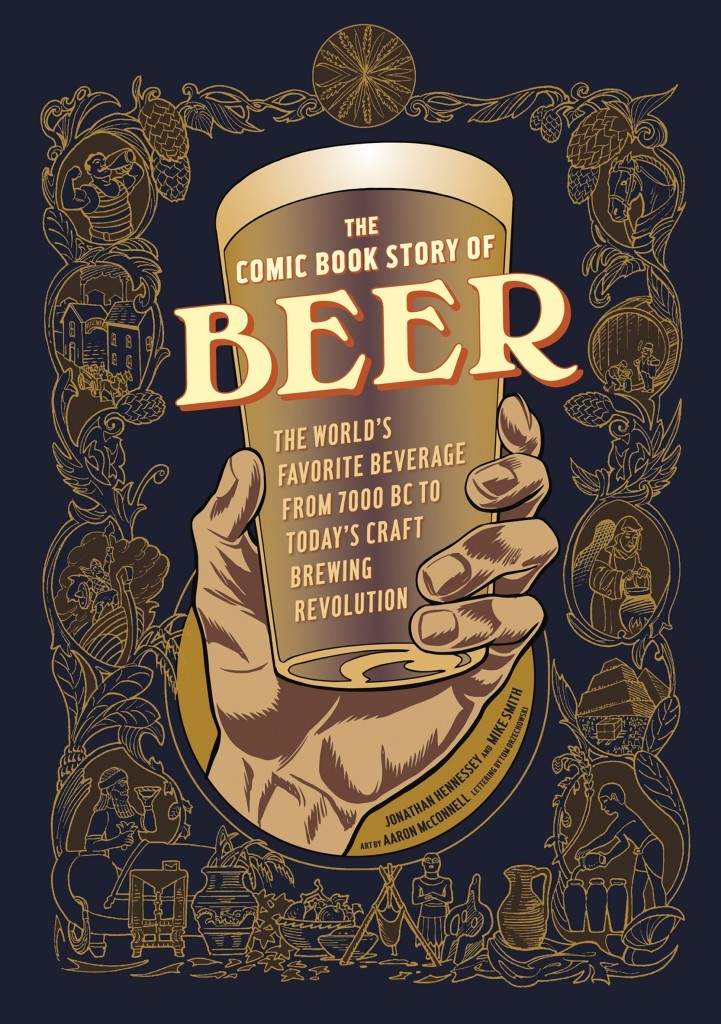 Comic books and beer — there’s nothing quite like pairing your childhood love of graphic novels with the grownup penchant for ales and lagers. Though beer is considered the drink of the people, and always has been, many of us don’t actually know all that much about the history of the drink that’s become so ubiquitous.

It’s a problem that longtime friends Jonathan Hennessey and Mike Smith aim to solve with their new graphic novel, The Comic Book Story of Beer: The World’s Favorite Beverage from 7000 BC to Today’s Craft Brewing Revolution. Hennessey, an author of other history-based graphic novels, said he had a “eureka” moment while visiting Smith at the brewery where he had been working as a brewer in 2010. Smith’s anecdotes about the beer-brewing process and the history of the tradition seemed like the perfect material for a graphic novel. In an interview with The Cheat Sheet, Smith said he jokes that the opportunity for him to collaborate in writing a book was practically handed to him on a silver platter.

It was an ambitious undertaking, as the two authors sought to tell the entire history of what is known about beer and its place in civilization. The end result, along with the creative work of artist Aaron McConnell, is 170 pages filled to the brim with information about beer’s place in history, how it’s made, and the changes in brewing happening today. It just earned a place on The New York Times Bestseller list, and could be the perfect holiday gift for the beer lover in your family. Thinking about picking up an extra copy for yourself? Here’s a preview of what you’ll find inside.

Hennessey and Smith go as far back as possible to start detailing the history of beer — 9,000 years ago to about 7000 BC. Before that point, beer was likely brewed in animal skins or other vessels that have disappeared with time. However, there’s a strong chance that beer is the reason we have organized civilization at all, Smith said. “There’s a very convincing argument [that] hunter-gather societies became agricultural societies because of the need for grain to make beer,” he explained.

Fast forward a bit, and beer had become the official drink of ancient Egypt. In fact, the oldest identified brewery was discovered by archaeologists in Egypt, and unearthed records show that the laborers who built the pyramids were paid in beer, Hennessey said.

2. Blame the Romans for making beer a second-class drink

Common experience tells us that beer plays second fiddle to wine in sophisticated circles, and for some reason has less prestige. That’s a product of resources and politics in the era of the Roman empire, Hennessey and Smith explained. Grapes were plentiful in southern Europe, while grain was always the crop of choice in societies to the north.

As Rome and Greece expanded their power, their drink — wine — became the beverage of choice for rulers in other nations, while beer was relegated to the barbaric tendencies of the Roman empire’s enemies. As a result, most of Western civilization continues to view beer in a less-than context.

3. Traditionally, brewing was a woman’s job

Long before figures like Busch and Miller took over the beer scene, brewing wasn’t a profession — it was part of the to-do list for a woman managing her home. Home brewing fell under the women’s duties, and widows looking to earn a living or women exceptionally good at making beer began serving it to other men as a way to increase their income.

Men who didn’t have anyone at home, or whose wives weren’t so adept with fermentation, would stop by these “public houses,” which had opened their doors to serve beer after the workday. As a result, modern-day pubs were formed.

4. Beer and humanity have always been linked

Just as beer played a major role in the construction of the pyramids, Smith said you can view almost any era in history through the lens of beer. “Beer is a touchstone all along the arc of human civilization,” he said. Monks studied it. Julius Caesar thought it made soldiers stronger. It survived the Black Plague and Prohibition, and is mentioned in the Bible, Beowulf, and Shakespeare.

By picking through classic historical resources and new research happening at universities across the country, Hennessey and Smith were able to do more than just regurgitate mainstream history. Smith’s background knowledge of creation myths and stories added color to the process, though they were careful to ensure that myths didn’t make it into the book — facts did. “We were able to set the record straight on a couple of these myths that tend to get repeated over and over,” Hennessey said, a goal that was important to them.

5. To know craft beer, you need to know its history

No one wants to go back to the old-school days of high school history classrooms and endure the pain of textbooks again, Hennessey said. But he and Smith strongly believe that to truly appreciate the craft beer industry today, you need to understand how it evolved. “Brewers are really expanding the very concept of what beer can be — mixing and matching traditions of brews,” Smith explained, noting how much the craft beer industry has exploded in the past five years or so.

But they’re not brewing on a whim, he argued. The ones who are creating quality brews have a solid understanding of what came before them. Knowing that history yourself allows you as a consumer to pick out when a craft brewer is doing something exceptional, Smith said. “It allows you to become a more educated consumer,” he said. “The more you know, the more you can appreciate.”

Smith compares this background knowledge to being able to appreciate jazz music. To grasp the depth of skill of a jazz musician, you need to understand the basics of music theory and recognize where the artists are riffing off it in new ways. In the same way, if you know the qualities of a traditional IPA or porter, you can appreciate when a brewer adds a new element. For Smith, the book is a perfect way to familiarize yourself with the history and the finer notes of beer brewing. “Everyone loves beer, and people love comic books. It’s a really disarming way of learning,” he said.

For Hennessey, who is a self-proclaimed evangelical of all history, the topic of beer can open the door to historical themes of every stripe. “Beer makes people happy,” he said. “It has that halo effect on everything that touches it.” They’re not exactly tricking you into reading a history book, but Hennessey hopes readers will pick up some themes along the way — even as they’re reading about vikings tipping back a tall one.