What Happened on Friday the 13th? 13 Facts About the Unlucky Day

Stevie Wonder might have said “superstition ain’t the way,” but those of us that celebrate Friday the 13th can’t be bothered with his advice. Whether you mark with a new tattoo, binge-watch scary movies all night, or spend all day anticipating a spike in unfortunate occurrences, reveling in the spookiness of Friday the 13th can be quite fun. That said, we can’t help but wonder what happened on Friday the 13th to make the day so unlucky (and spooky).

What happened on Friday the 13th

Many believe Friday the 13th superstitions began in the Middle Ages and had to do with the story of Jesus’s last supper and crucifixion. According to the story, 13 people were present, and it took place on the 13th of Nisan Maundy Thursday before his execution on Good Friday. However, since the last supper occurred on a Thursday, this example only reveals the separate reasons why the number 13 and Friday were considered unlucky. In fact, there was no reference to both Friday and the number 13 being unlucky together until the late 19th century. 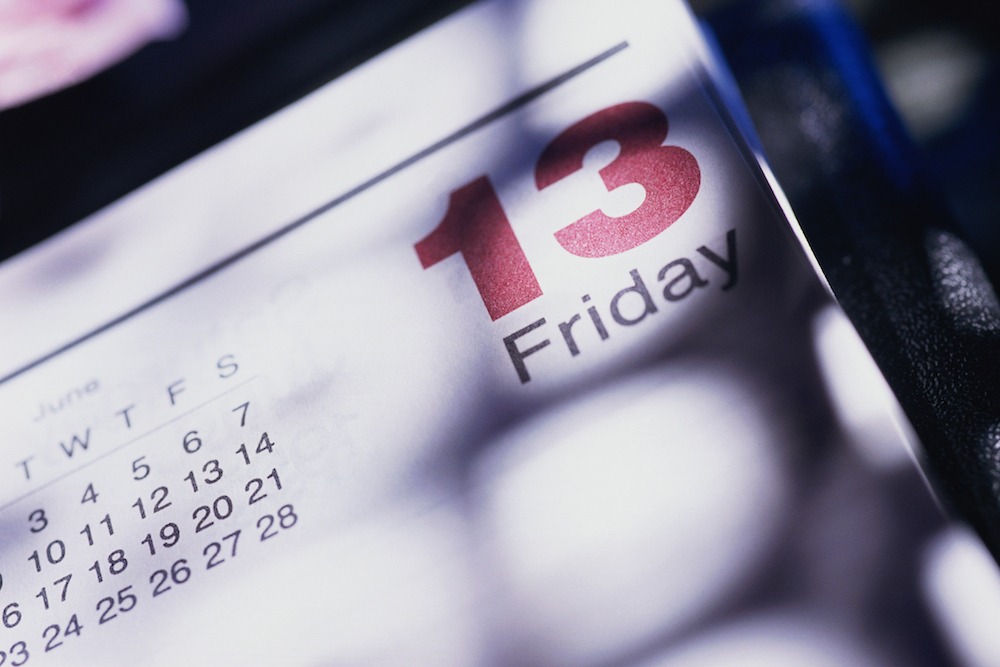 There are many Friday the 13th origin theories. | iStock

Despite popping up in the late 19th century, the superstitions surrounding Friday the 13th didn’t take off until 1907 when Thomas W. Lawson’s Friday, the Thirteenth published. That said, the famous novel isn’t the only reason the date became so well-known.

In the 20th century, a new origin was theorized — one that would finally explain why both the day and date are so unlucky. In addition to the story of Jesus’s last summer, many came to believe that the superstition dates back to Friday, October 13, 1307, when Philip IV of France arrested hundreds of the Knights Templar. Since the 20th century, the theory has spread widely and been mentioned in many novels, including Maurice Druon’s The Iron King, Steve Berry’s The Templar Legacy, and Dan Brown’s The Da Vinci Code.t

Want to know more about Friday the 13th? We share 13 facts about the unlucky day and number, ahead.

1. There’s a scientific name for fear of Friday the 13th

2. It only happens a few times a year — at most

Ever wonder why hotels don’t have a 13th floor? While the reason isn’t clear, many theorize it has to do with the unlucky number.

Even doctors are skeptical of the number 13 (just kidding). Like hotels, hospitals often skip the 13th floor and don’t have a 13th room either. Also, in some airports, the 13th gate is left out.

5. Alfred Hitchcock was born on the 13th

Psychological thriller legend, Alfred Hitchcock was born on August 13th, 1899. And, get this: His 100th birthday fell on Friday the 13th. No big deal.

6. Many commemorate the day with a tattoo

Some of those that celebrate Friday the 13th mark the day with some fresh ink. In fact, Friday the 13th tattoos have become so popular that some parlors offer special deals on the day.

7. Our brains intensify the superstition

Ever wonder why so many are obsessed with the spookiness of Friday the 13th? According to Thomas Gilovich, chairman of the department of psychology at Cornell University, it might have something to do with the way our brains make associations. “If anything bad happens to you on Friday the 13th, the two will be forever associated in your mind, and all those uneventful days in which the 13th fell on a Friday will be ignored,” he told Live Science.

8. There are 13 full moons every year

What could be more spooky than Friday the 13th? 13 full moons — especially when one that falls on the 13th. Superstitious or not, 13 full moons gives us full body chills.

On Friday, July 13, 1923, Hollywood received its famous sign. The sign originally read “Hollywoodland,” which was the name of the housing development built in the hills. The last four letters were later removed in 1949 to read “Hollywood.” This year marks the landmark’s 95th anniversary — and it just so happens to fall on Friday the 13th.

10. Not everyone believes the number 13 is unlucky

As it turns out, not everyone is superstitious about number 13’s intentions. In fact, Pagans consider it a lucky number.

You know the superstition is real when you’re willing to pay a professional dinner party guest. In Paris, those with Triskaidekaphobia won’t think twice about it. In fact, they even have a French word for it: Quatorzieme.

12. Stockbrokers don’t typically buy or sell stocks on the 13th

Believe it or not, the fear of Friday the 13th can have a significant impact on business — particularly when it comes to flying. Some reports show that airlines lose millions of dollars on Friday the 13th.