When Does Disneyland Decorate for Halloween? Everything You Want to Know About Going to Disney Parks in the Fall

Summer isn’t over for another few weeks, but the back-to-school season (and early release of pumpkin spice lattes at Starbucks) has us dreaming of fall. And that, of course, includes Halloween, too. While October 31st is still two months away, it’s never too early to plan Halloween festivities — especially if they include a trip to Disneyland or Walt Disney World.

It’s no secret that Disney parks go all out for the Christmas season, but Mickey throws a “spooktacular” Halloween celebration, too. Every September, Haunted Mansion gets a Nightmare Before Christmas makeover, the parks are transformed into a Disney-themed Halloweentown, and must-try Disney foods get sprinkled with a little Halloween magic.

Can’t wait for the festivities to begin? Neither can we. Find out when Disneyland and Disney World decorate for Halloween, how to get tickets to Mickey’s Halloween Party, and more, ahead. 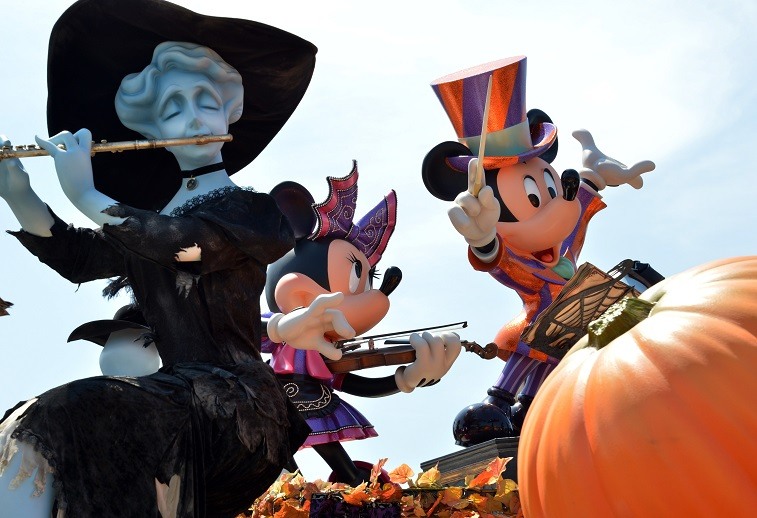 When does Disneyland decorate for Halloween

For those hoping to celebrate Halloween with Mickey and friends, now’s the time to start planning. Halloween at Disneyland starts September 7th and goes until October 31st. At Disneyland, the Main Street Pumpkin Festival is a must-see — don’t forget to get your picture taken in front of the giant, Mickey Mouse jack-o-lantern. Various rides — including Haunted Mansion and Space Mountain — have a spooky twist, too so be sure to reserve FASTPASS tickets for these popular Halloween haunts.

California Adventure also celebrates Halloween. Guardians of the Galaxy turns into an adventurous ride with a “Monsters After Dark” theme, and Carsland gets a spooky makeover with Luigi’s Honkin’ Haul-O-Ween and Mater’s Graveyard JamBOOree.

When does Disney World Decorate for Halloween

Halloween starts early at Walt Disney World with Mickey’s Not-So-Scary Halloween Party from August 17th to October 31st. Like Disneyland, some attractions get a Halloween makeover, including the Mad Tea Party, Pirates of the Caribbean, and Space Mountain. In addition to rides, the parks offer plenty of Halloween entertainment like the Hocus Pocus Villain Spelltacular, Boo-to-You Halloween Parade, and the Happy HalloWishes Fireworks Show.

Can adults wear costumes to Disneyland and Disney World

Guests interested in the Walt Disney World Halloween celebrations can attend Mickey’s Not-So-Scary Halloween Party on select nights in August, September, and October from 7:00 p.m. until midnight. Guests must purchase tickets, but they are more affordable than a regular single day ticket.

Disneyland guests can purchase tickets for Mickey’s Halloween Party and enjoy both the celebrations, plus three hours of park time. The popular celebration takes place on select nights in September and October from 6:00 p.m. to 11:00 p.m. Mondays through Thursdays and 7:00 p.m. to midnight on Fridays.