No matter how often you travel, everyone could use a little help now and again. And given our current social and political climate, changes in travel related policies and procedures are bound to be expected. Lucky for us, TSA has a special Twitter handle dedicated to answering any and all questions you may have pre-, during, or post-trip. How great is that?

If it sounds too good to be true, just see for yourself. All you need to do is tweet your question to @AskTSA, and a TSA representative will get back to you ASAP. Naturally, we were curious to see what some other folks had to say, so we got to scrolling for ourselves. From completely absurd to totally off the wall, we’re counting down to the No. 1 most ridiculous thing anyone’s tweeted at the TSA. And trust us, it’s worth the wait.

15. Can you explain the difference between holding and wearing a sweater through security? 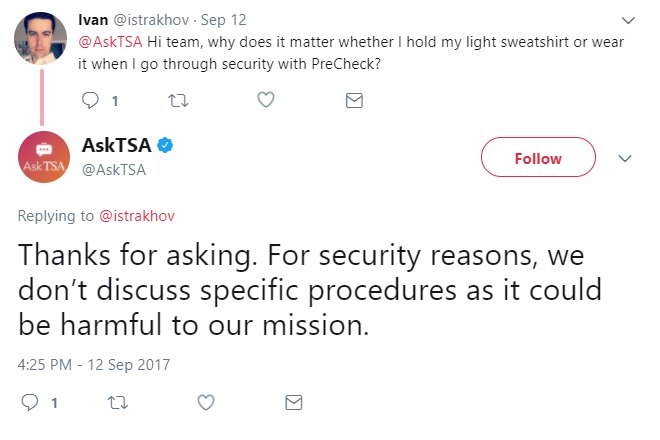 No, it can’t. TSA’s rules and regulations exist for good reason. Seeing as the organization’s sole mission is to ensure the safety of people and commerce traveling throughout the U.S., it’s no surprise that there are some secrets we’ll just never know. But unfortunately for one airline passenger, that wasn’t a good enough answer.

One guy was curious to know what difference it makes whether he wears or holds his light sweater when going through security with PreCheck, and apparently, TSA’s reply to keep its methods to itself didn’t go over so well. Note to self: Don’t expect an answer when inquiring about TSA’s security measures.

Next: Some folks are more attached to the skeletons in their closet than others. 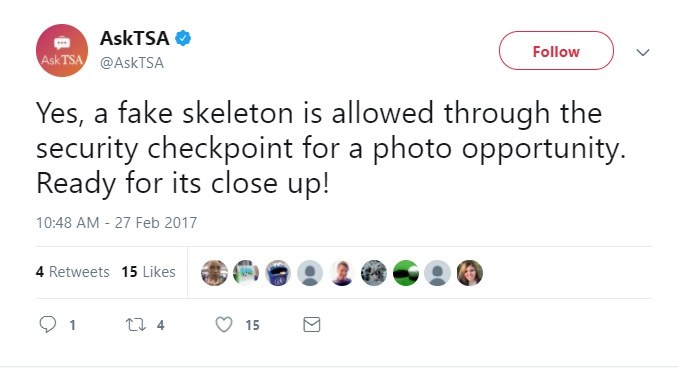 Apparently, one guy really wanted to get his fake skeleton through security. The only question we have is, “Why?” Different strokes for different folks, we guess.

Next: Have you been living under a rock?

13. Are my knives allowed on the flight? 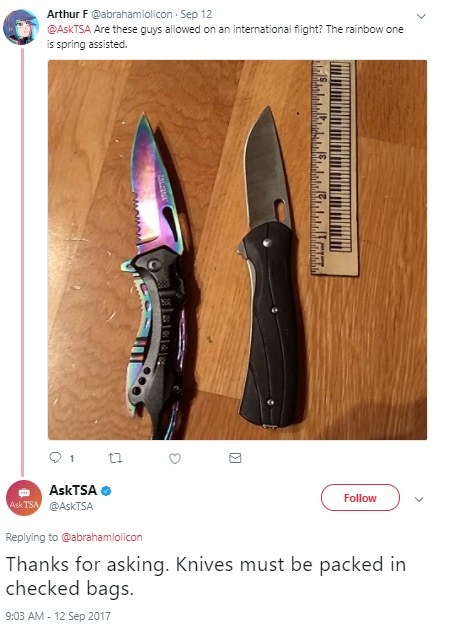 Anyone who’s old enough to own a knife is old enough to have lived through 9/11. And is there any way any sensible traveler would think knives would be a good fit for a flight? Not really. At the risk of seeming a little too judgmental here, we’re willing to add this question to the list. Knives inside plane cabins just isn’t a thing. Of course, they must be packed in checked bags only.

Next: This is a little too much cash to carry. 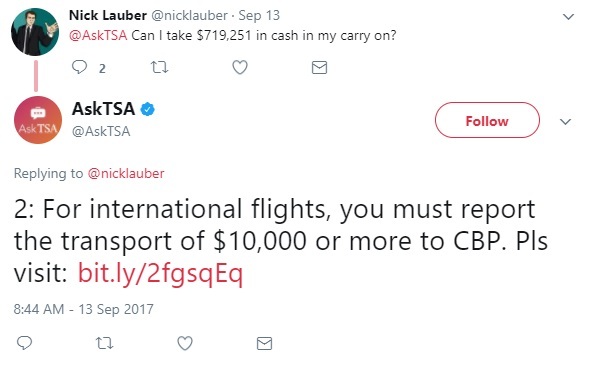 Why would anyone ever think it’s a good idea to broadcast the exact amount of cash they’re planning to have on their person prior to traveling? Not too smart, buddy. While keeping some cash in your carry-on is highly recommended, there’s no need to go overboard.

Next: The power of Harry Potter is alive and well. 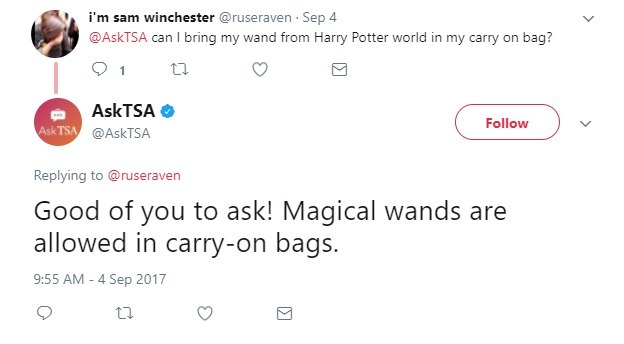 Fancy yourself a Harry Potter fan? You’re not alone. And clearly, the TSA is just as excited about that wand you snagged from the Wizarding World of Harry Potter as other die-hard fans are. Can you bring it along with you in your carry-on? You bet!

Next: Everyone’s got their hobbies.

10. Can I bring a taxidermy alligator head in a carry-on? 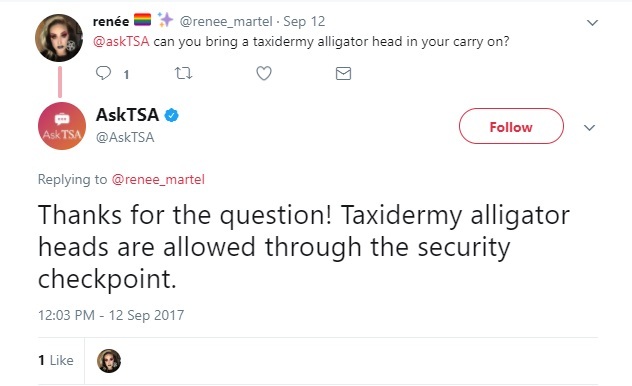 The question is totally bizarre, but it’s obviously worth asking because there’s at least one person who inquired whether she could do just that. Some people’s hobbies are … interesting.

Next: That’s not the only bizarre item to get through security.

9. Can I bring a buffalo jawbone in a carry-on? 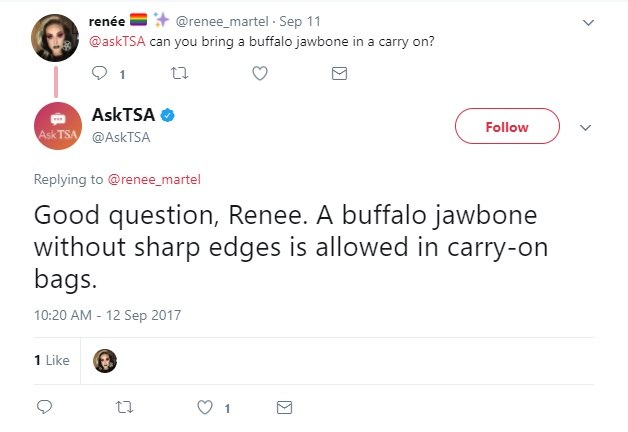 Apparently, the Twitter user who was curious about the taxidermy alligator head has quite the collection because she asked whether a buffalo jawbone was an acceptable carry-on item, too. Turns out, it is, so long as it doesn’t have any sharp edges. But still, we’re a bit confused.

Next: Seriously, who even eats this stuff anymore?

8. Why was my marshmallow Fluff confiscated? 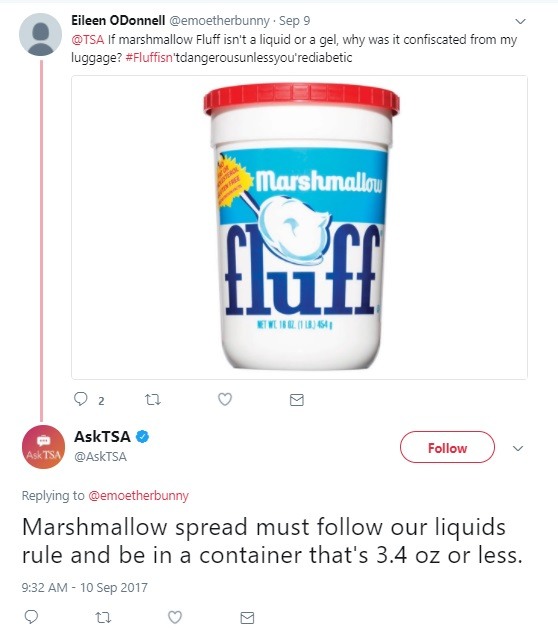 Mainly, we’re just shocked that people still eat this stuff. Fluff reminds us of one thing, and that’s our childhood. If you were lucky enough to grow up in a house that kept the marshmallow-based condiment in the pantry, then you know how dangerous it can be — if you’re trying to eat clean, that is. But one Twitter user was rather perplexed when the TSA confiscated her jar of the stuff, seeing as it’s neither liquid nor gel.

Ultimately, TSA said that Fluff falls into the liquids category, so there’s that. We’re still curious about exactly what’s in it, but we know one thing: Perhaps it’s best to stay far away from any food with a substance that’s up for debate.

Next: Not everyone’s a dog lover.

7. Can I bring my guinea pig on with me? 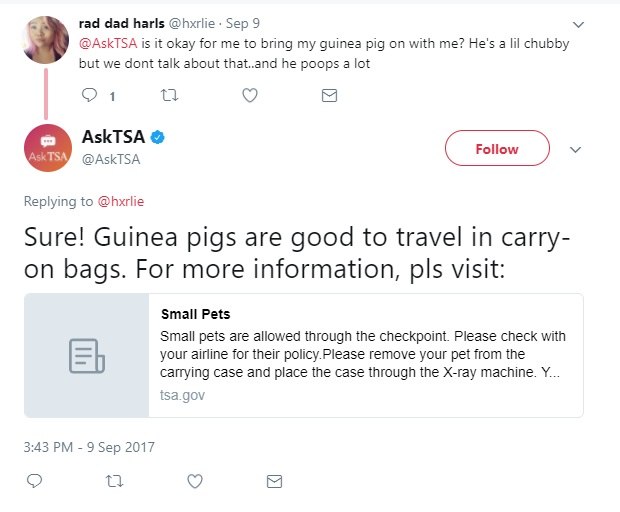 Considering guinea pigs are, in fact, part of the rodent family, this seems a bit peculiar. Are there people out there who are absolutely gaga for their guinea pig? Yes. Does asking the TSA whether you can bring your little guy along seem a little out there? Once again, yes. However, guinea pigs are, indeed, allowed in carry-on bags. We just hope the other passengers sharing the row don’t get too annoyed with all the squealing.

Next: There are no words to prepare you for No. 6. 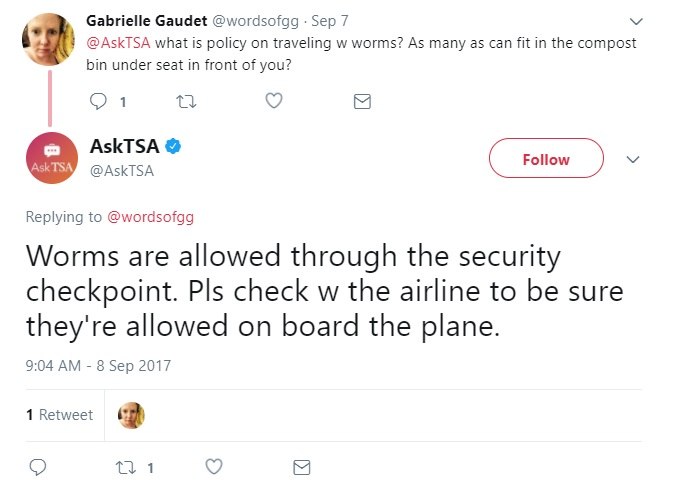 Ew. Just, ew. Besides being totally grossed out by the mere thought of someone traveling on a plane with worms, we’re completely confused yet again. One passenger asked the TSA if she could bring as many worms as would fit in a bin under the seat. Disgusting. We can’t devote any more time to thinking about this scenario. We’ll just leave you with this: Worms can weasel their way through the security checkpoint, but whether they’ll be allowed on the plane is up to the airline.

Next: We appreciate this guy’s dedication to a good time.

5. Can I bring a pinata filled with alcohol in my carry-on? 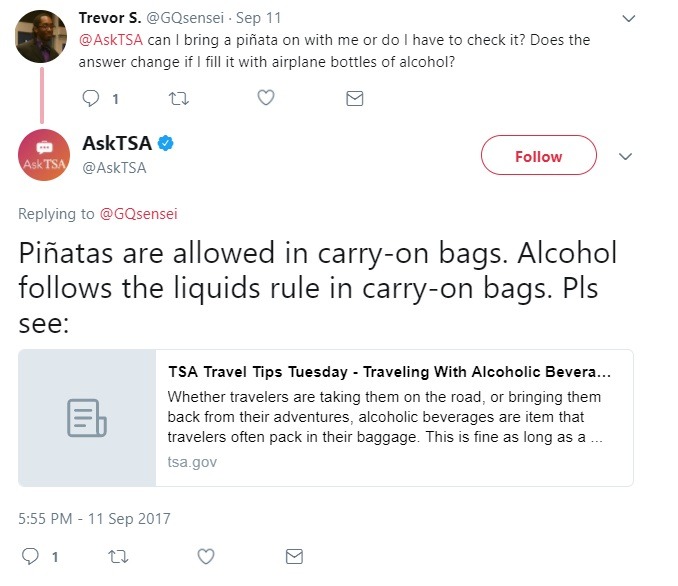 First of all, kudos to this guy for sounding like a fun time. However, his better judgment might be lacking on this one. We had a good chuckle when we saw that one person asked the TSA, “Can I bring a piñata on with me or do I have to check it?” and immediately followed it up with, “Does the answer change if I fill it with airplane bottles of alcohol?” While the TSA does allow piñatas, cocktail-based contents that are better suited for adult-only parties are not. Like all other liquids, they need to follow the same rules.

Next: Some things are better kept to yourself. 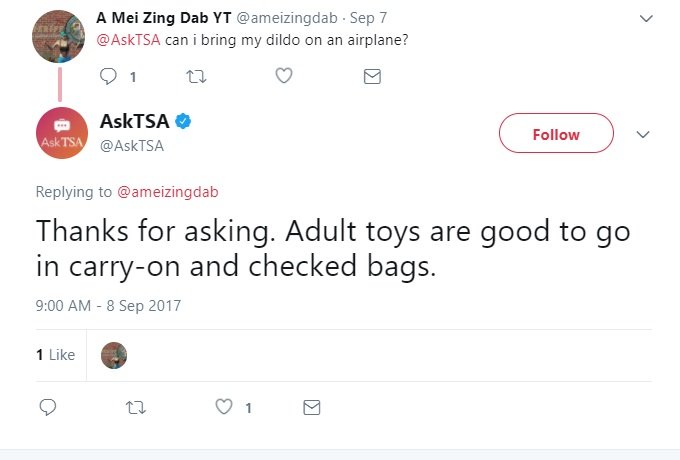 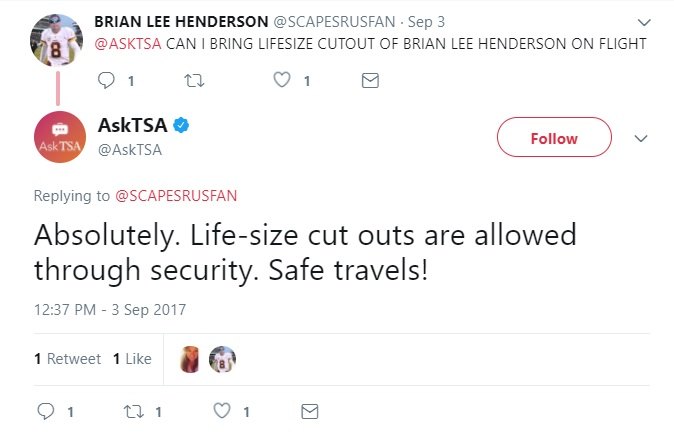 Lots of people have big egos, and this guy is one of them. In fact, he thinks so highly of himself that he recently asked the TSA whether he could bring a life-size cut out of himself on board. The answer? Yes. The reality? We suspect a larger-than-life personality on this one.

Next: This person takes staying safe to a whole new level. 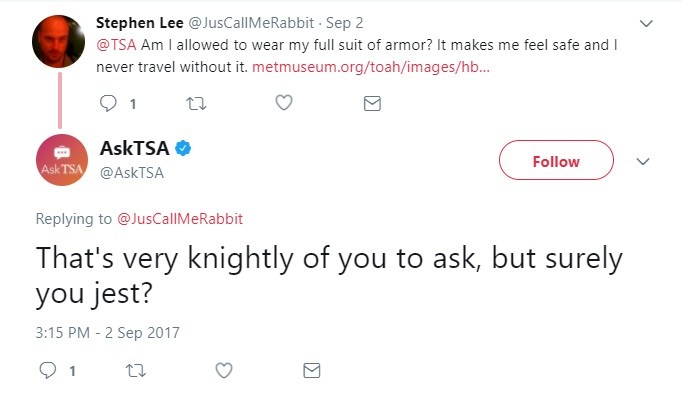 This one’s pretty funny, thanks to the TSA’s obvious you-must-be-joking reaction. When one guy asked, “Am I allowed to wear my full suit of armor? It makes me feel safe and I never travel without it,” the TSA’s response was gold. “That’s very knightly of you to ask, but surely you jest?” @AskTSA tweeted back. “No, I joust,” the user replied. Touché.

1. Is there a limit to the amount of condoms I can bring in my carry-on? 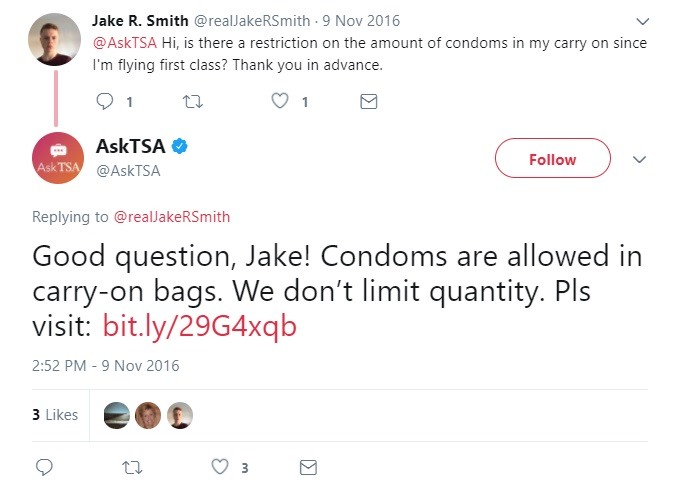 Wow, somebody get this guy a beer. He’s officially one of the most attention-seeking people on the planet. Hey guy, we get it. You’re a stud who not only needs to travel with a bunch of condoms, but you only fly first class. Your life must be amazing. (But if you happen to read this and ever want to take us on your private jet, we’d consider.)

Read more: These Are the Things You Should Never Say to a TSA Agent