Going out to dinner is more than just a way to satisfy your hunger — from the ambiance to the service to the company, it’s all about creating an experience. That’s part of the reason why Applebee’s is failing to capture millennials: tacky décor and bland entrees just won’t cut it in today’s world. Modern diners are looking for the next great restaurant adventure.

A recent poll found that only 20% of Americans visit full service restaurants once per week, but that might be because they don’t know about these unique spots. Ahead, check out the most bizarre restaurants in the world that you never knew existed. 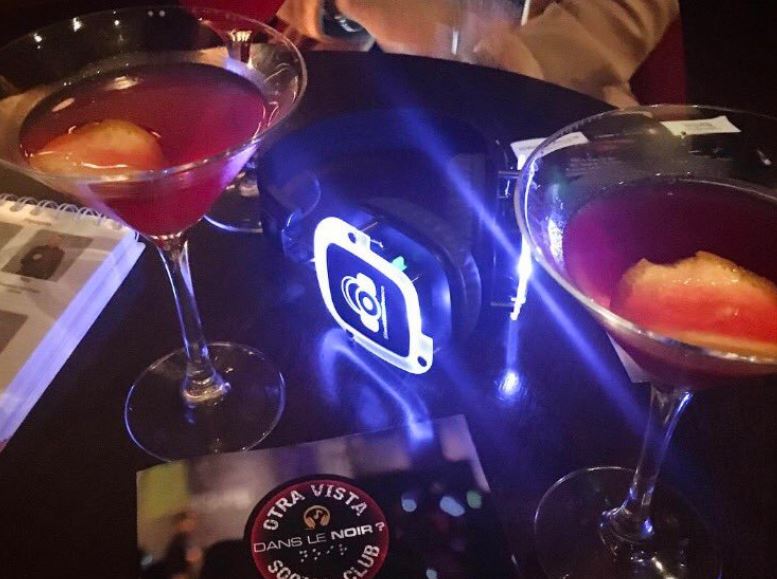 Literally translated, Dans le Noir means “in the dark” in French. That’s also how you’ll enjoy your meal at this surprising eatery.

The idea is that depriving one sense will make the others — like taste — work harder, thereby enhancing the quality of your food. Plus your date won’t notice when you drip pasta sauce on your shirt.

You can visit a Dans le Noir in several major cities worldwide, including London, Paris, Madrid, and Barcleona.

Next: At this restaurant, the servers are rude to you on purpose. 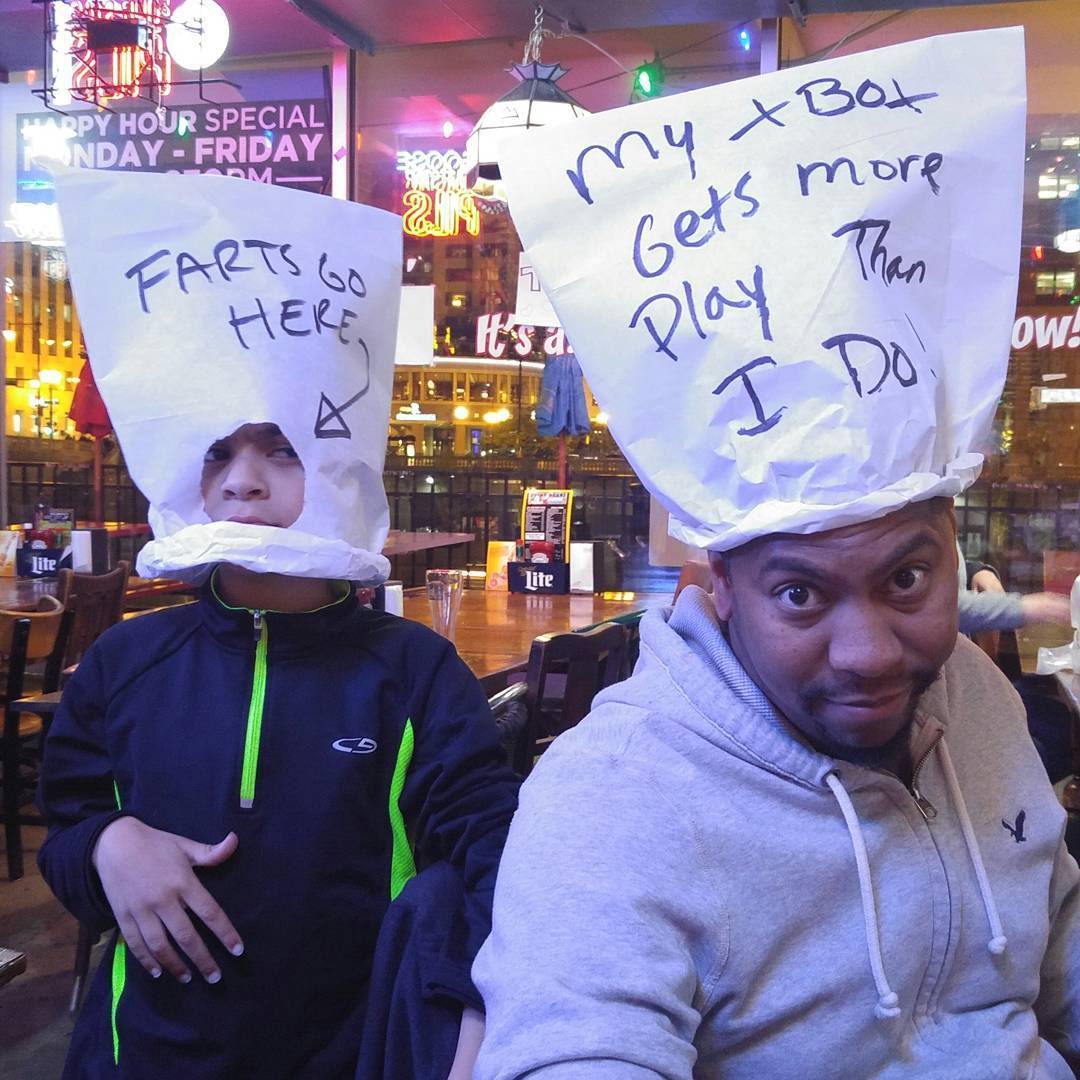 In case you were looking for waiters to be meaner. | Dick’s Last Resort Chicago via Facebook

Ever wanted to know what your server really thinks of you? Head to Dick’s Last Resort to find out.

This bar and restaurant chain is notorious for their intentionally rude behavior, which is all part of the atmosphere. While dining here, it’s not uncommon for servers to roll their eyes, insult you, throw napkins at you, and make you wear paper hats with vulgar things written on them.

If you’re easily insulted, stay far away from this establishment. But if you can laugh at any insult hurled your way, this could be your new favorite dining spot.

Next: Don’t dine here if you’re afraid of heights.

3. Dinner in the Sky — multiple locations 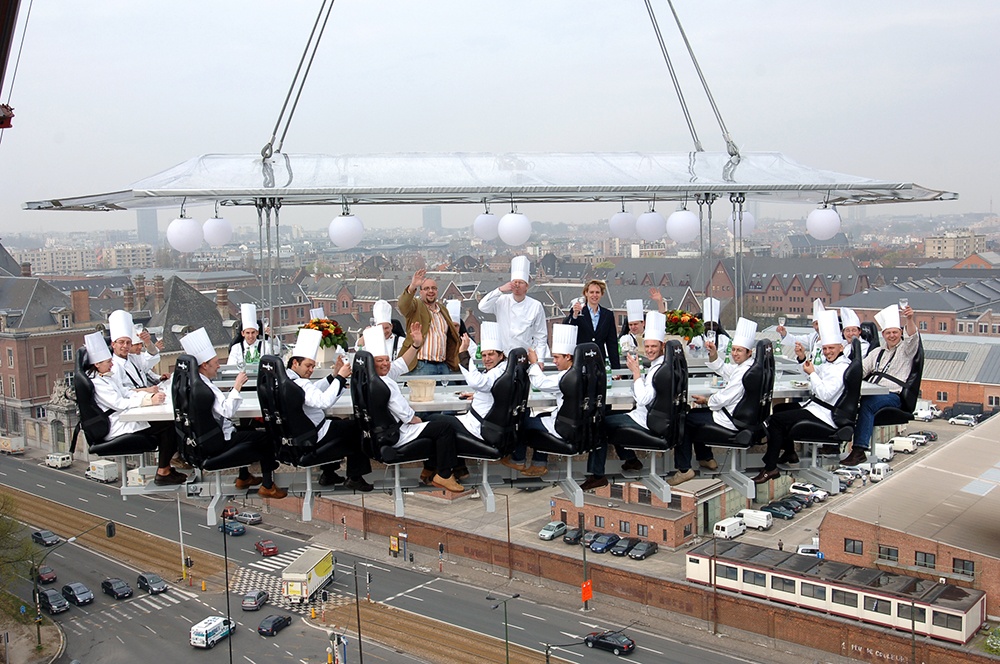 Hope they’re not afraid of heights. | Dinner in the Sky

Afraid of heights? Then forget agreeing to dinner at this one-of-a-kind restaurant. Diners here sit around a gigantic table that’s suspended high above the Earth with a crane. The original version is in Belgium, but now it’s become so popular that you can find this surreal dining experience in 45 countries worldwide.

Next: None of the servers at this restaurant are tall. 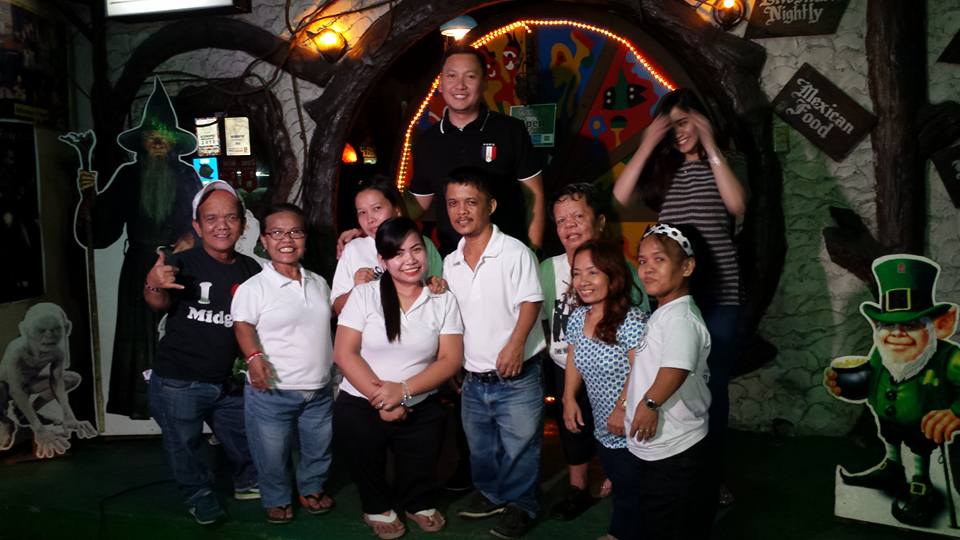 The restaurant is entirely staffed by little people. | hobbit house manila via Facebook

If you’ve ever felt the urge to dine at a restaurant that’s owned and staffed entirely by little people, then The Hobbit House is exactly where you should go. One reviewer said the spot had, “charming staff, nice décor and great food.” It’s a little expensive side, but most unique things are.

Next: This restaurant has an unexpected theme. 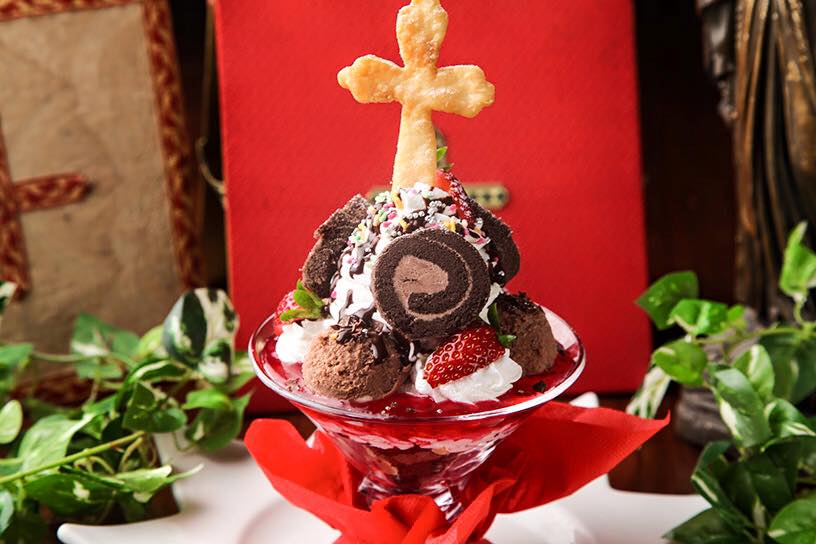 Even the ice cream is topped with crosses. | キリストンカフェ 東京 via Facebook

Christianity may be the most popular religion in the United States, but in Japan it’s a novelty worthy of a themed café. The Christon Café in Shinjuku is filled with religious memorabilia such as statues of saints, stained glass, and other elements that you’d find in Christian churches.

Next: Your dining mates at this place aren’t alive. 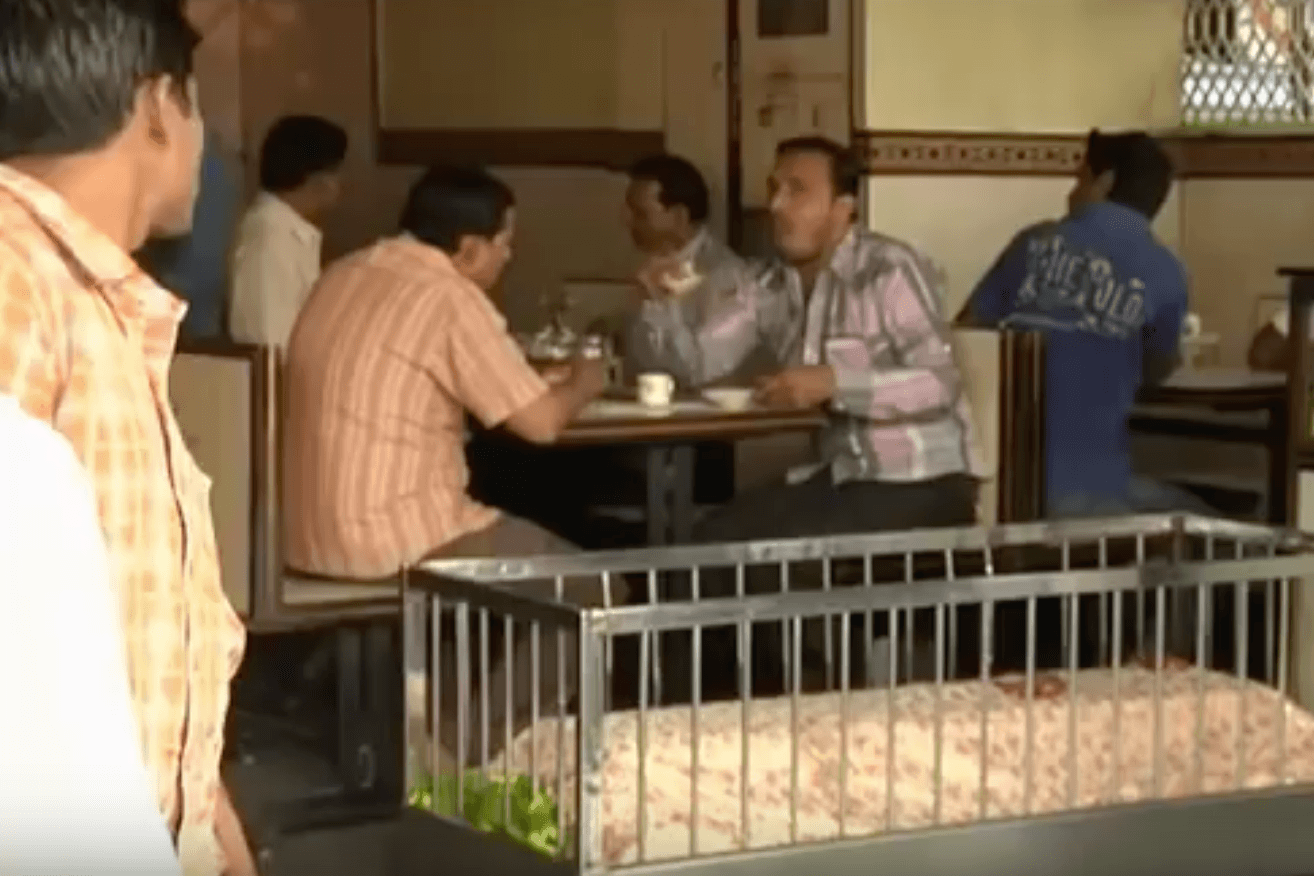 The graves are situated randomly around the restaurant. | AP via Youtube

Dine amongst the dead at New Lucky in India, where graves are situated between the tables. Even Krishan Kutti Nair, the owner for more than 40 years, has no idea who’s buried there.

The graves are painted green, decorated with a single dried flower daily, and situated randomly throughout the restaurant. And yes, they really have dead bodies inside them.

Next: Poop is the theme here. 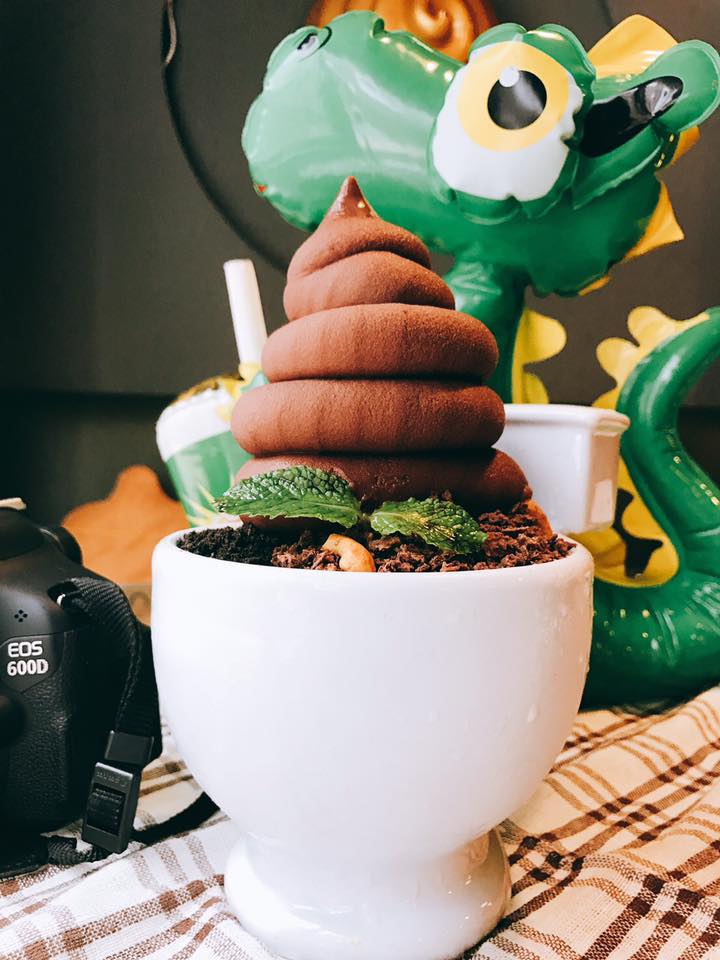 Customers eat from toilets and are sitting on toilets. | 便所主題餐廳(一中店) via Facebook

A restaurant based on excrement doesn’t seem like a good plan, but somehow Modern Toilet in Taiwan continues to attract customers.

Customers are seated on a toilet seat (with the lid down) that’s decorated with roses, seashells, or Renaissance paintings. The glass table has a sink underneath, and meals are served in a mini toilet bowl. Forget about cups — you’ll sip drinks from a mini urinal, and soft serve ice cream is swirled onto a toilet-shaped dish. Naturally.

Next: This restaurant is based on an unpopular historical figure. 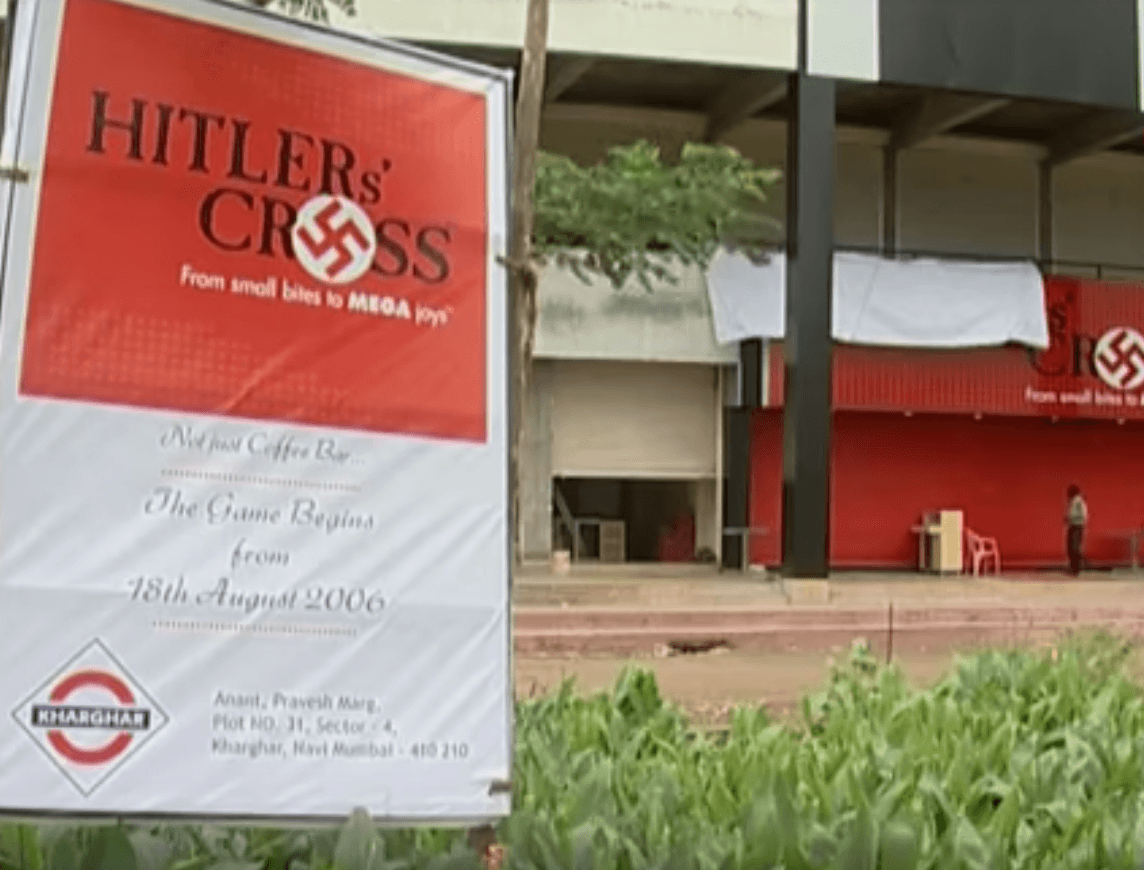 A swastika logo adorns this controversial Indian eatery. Founder Puneet Sabhlok claims he named his restaurant to attract more clientele. “Hitler is a catchy name. Everyone knows Hitler,” he said in an interview. 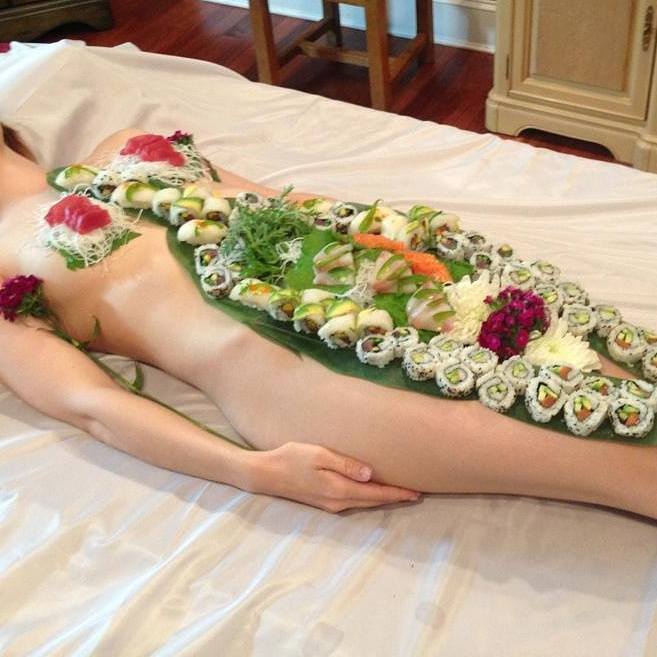 In case you are over regular plates. | The Nyotaimori Experience via Facebook

This type of restaurant employs a highly unusual serving platter: the human body.

Popular in Japan, these restaurants have servers who are trained to lie still for hours. They’re shaved, scrubbed with fragrance-free soap, and covered in sushi, which is when hungry patrons come to sample a few tasty rolls from their nude bodies.

Guests are discouraged from speaking to the models, and lewd, sexual comments are absolutely prohibited.

Next: Channel your inner mermaid here. 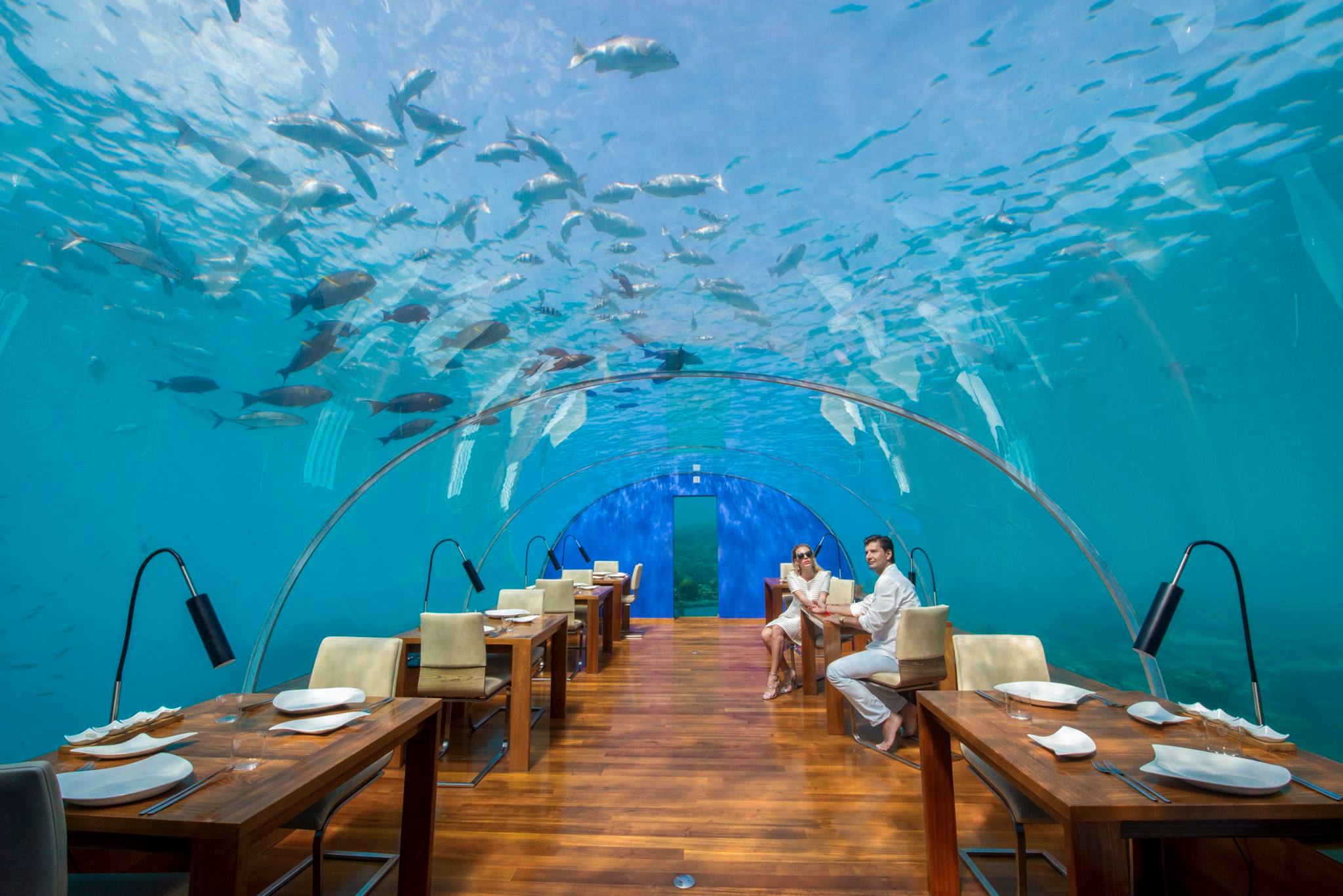 Forget ocean views, what about under the ocean views. | Conrad Maldives Rangali Island via Facebook

Pretend you’re a mermaid while you dine under the sea. This unique spot is situated 16 feet below sea level and features a completely clear acrylic domed enclosure so you can watch the fish swim by. But you better make a reservation — this gourmet restaurant only offers seating for 16.

Next: Get ready to ninja. 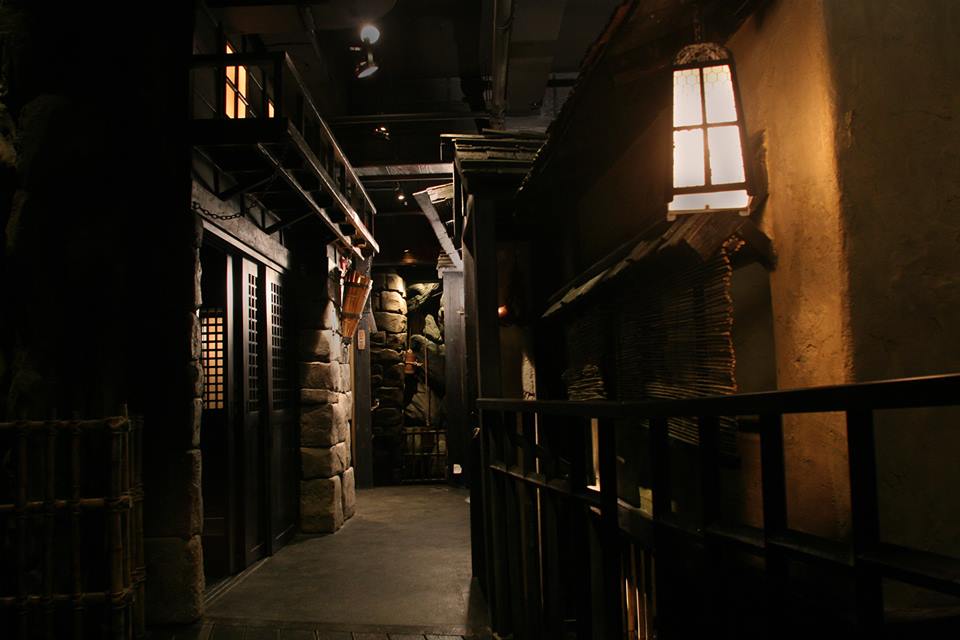 A New York Times restaurant reviewer called this place, “a kooky, dreary subterranean labyrinth… You are greeted there by servers in black costumes who ceaselessly bow, regularly yelp and ever so occasionally tumble.”

The whole place is filled with dark passageways and corners to mimic the feel of a 15th century Japanese feudal village. If you have a hankering for traditional Japanese fare in a quirky atmosphere, this is your kind of place.

Next: Eat in a tree. 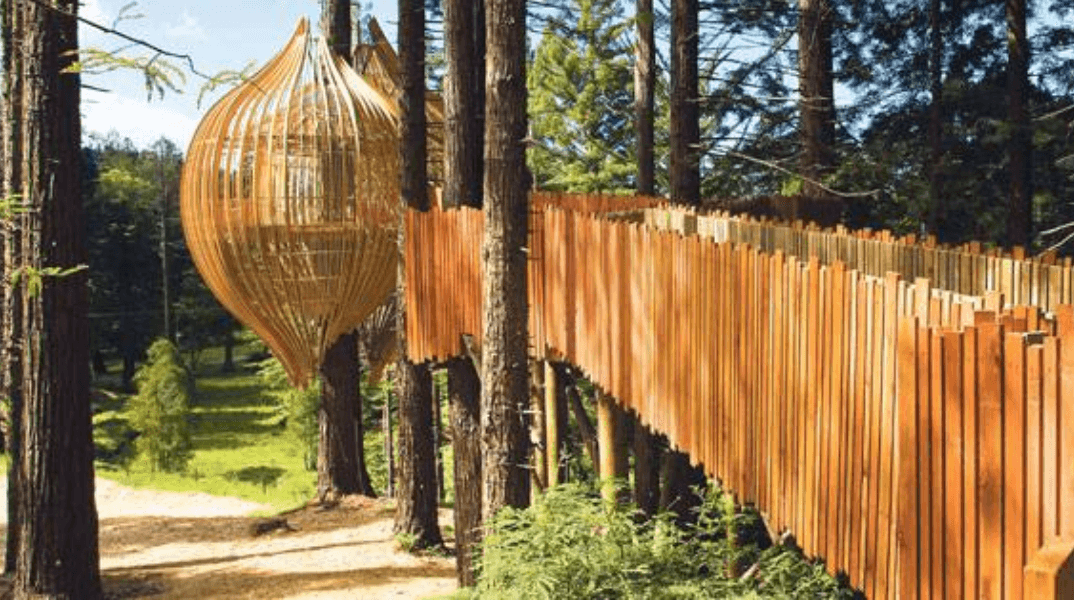 Dine in your very own treehouse. | Redwoods Treehouse via Facebook

There’s something so magical about this dining area that’s situated 32 feet above the ground and only accessible via treetop walkway. It’s only used for private functions, but you can invite 30 of your nearest and dearest for an unforgettable dinner in the trees.

Next: This place was created for people who like funeral homes. 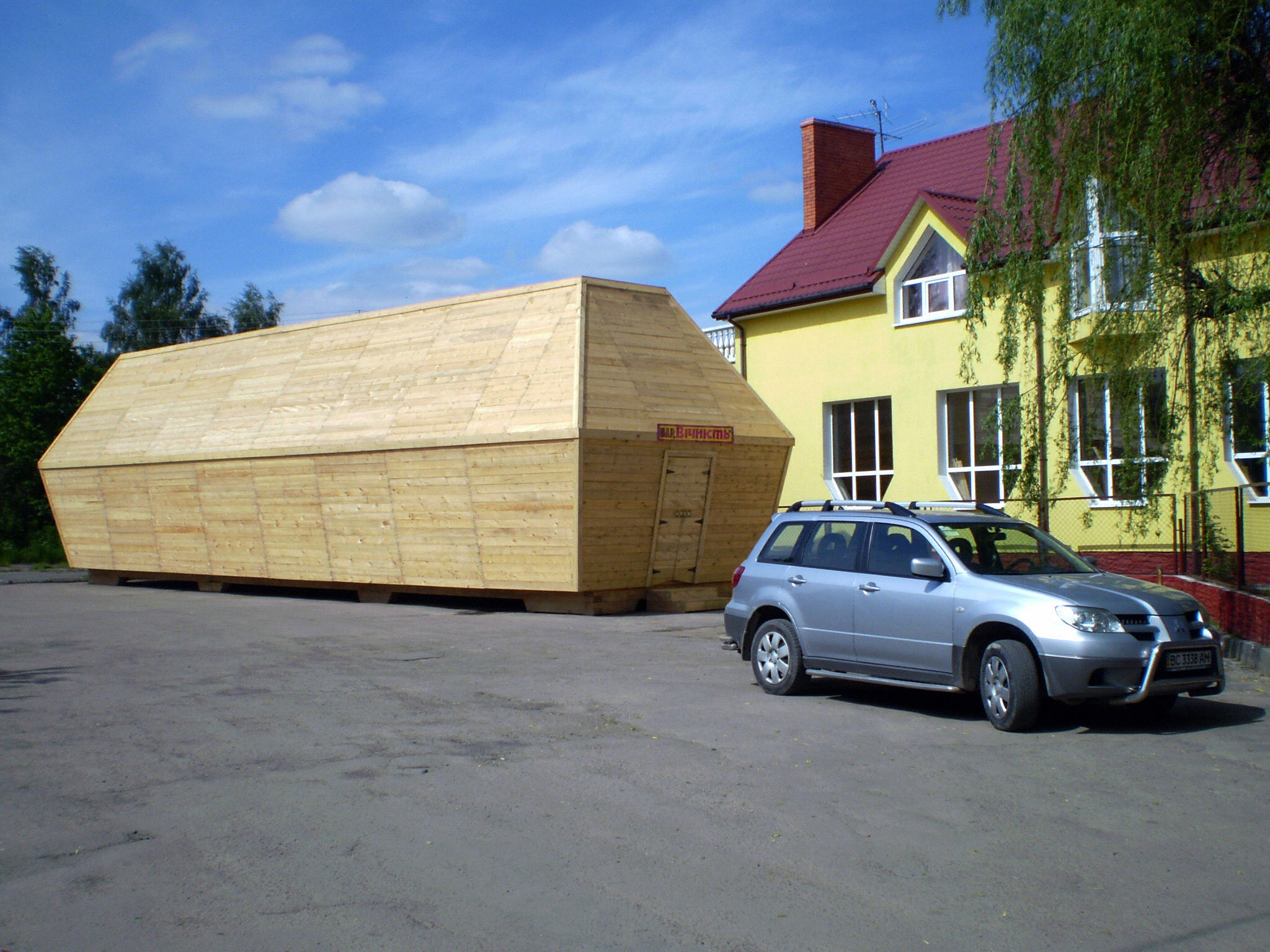 This place is sadly (or not)  closed. | STR/AFP/Getty Images

It’s the kind of dining establishment that the Addams family would adore. Sadly, it’s since been shut down, but was briefly one of the weirdest places to eat in the world.

At this morbid Ukraine restaurant, diners entered a coffin-shaped structure to enjoy their meals surrounded by even more coffins. There was funeral paraphernalia to check out before ordering and plenty of death-themed menu choices. A single candle on each table added to the dark and funeral-like atmosphere.

Next: Cat people are welcome here. 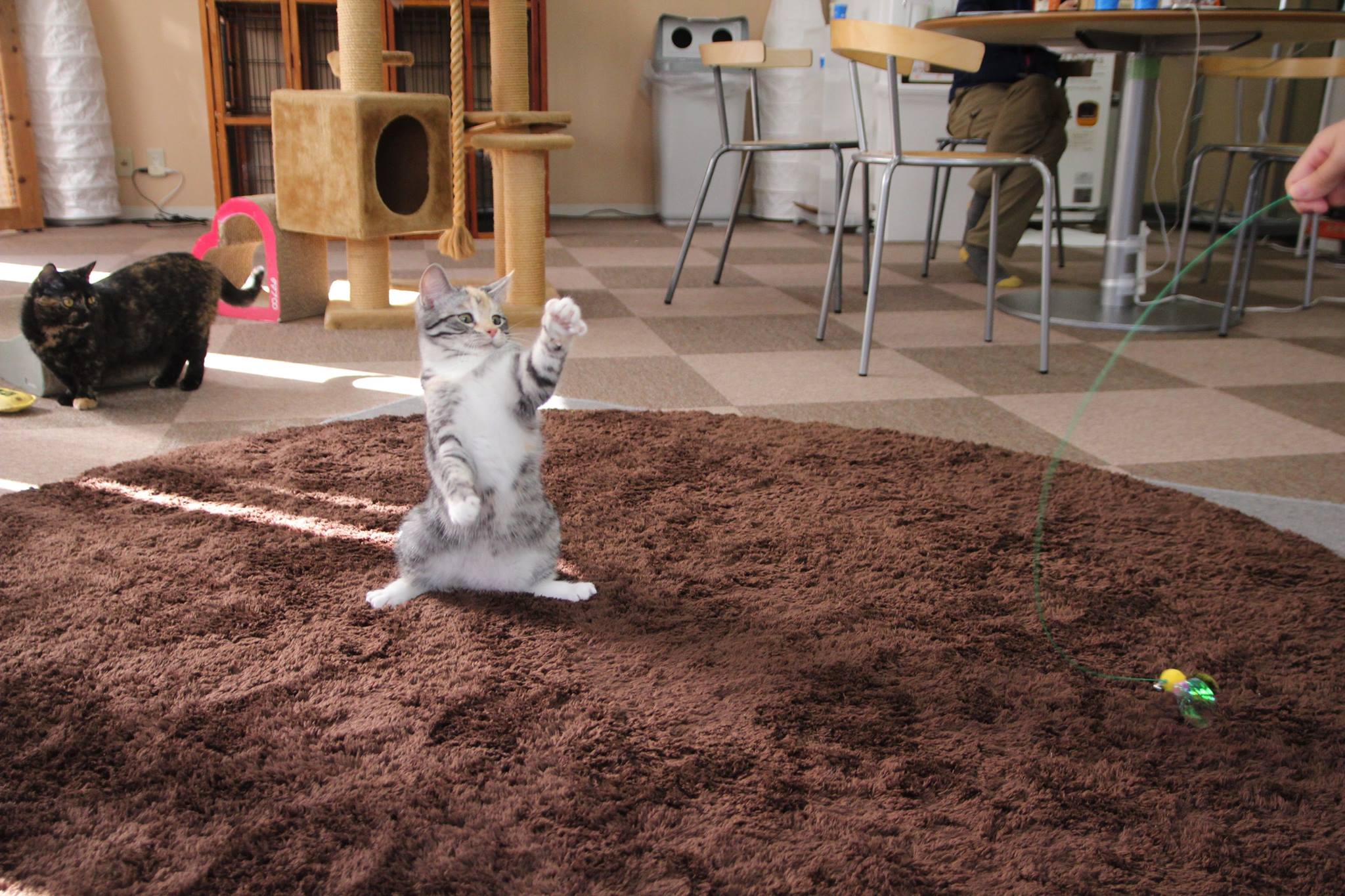 Cuddle with kittens while you sip your tea. | Cat Cafe ねころび via Facebook

Love cats? You can hang out with a whole bunch of them at this unique café in the entertainment district of Ikebukuro. Enjoy your coffee, tea, or scone with a side of kitten cuddles, or visit in the evening to watch as the felines dine on cat food while arranged in a circle.

Next: Go on a spy mission with a side of dinner. 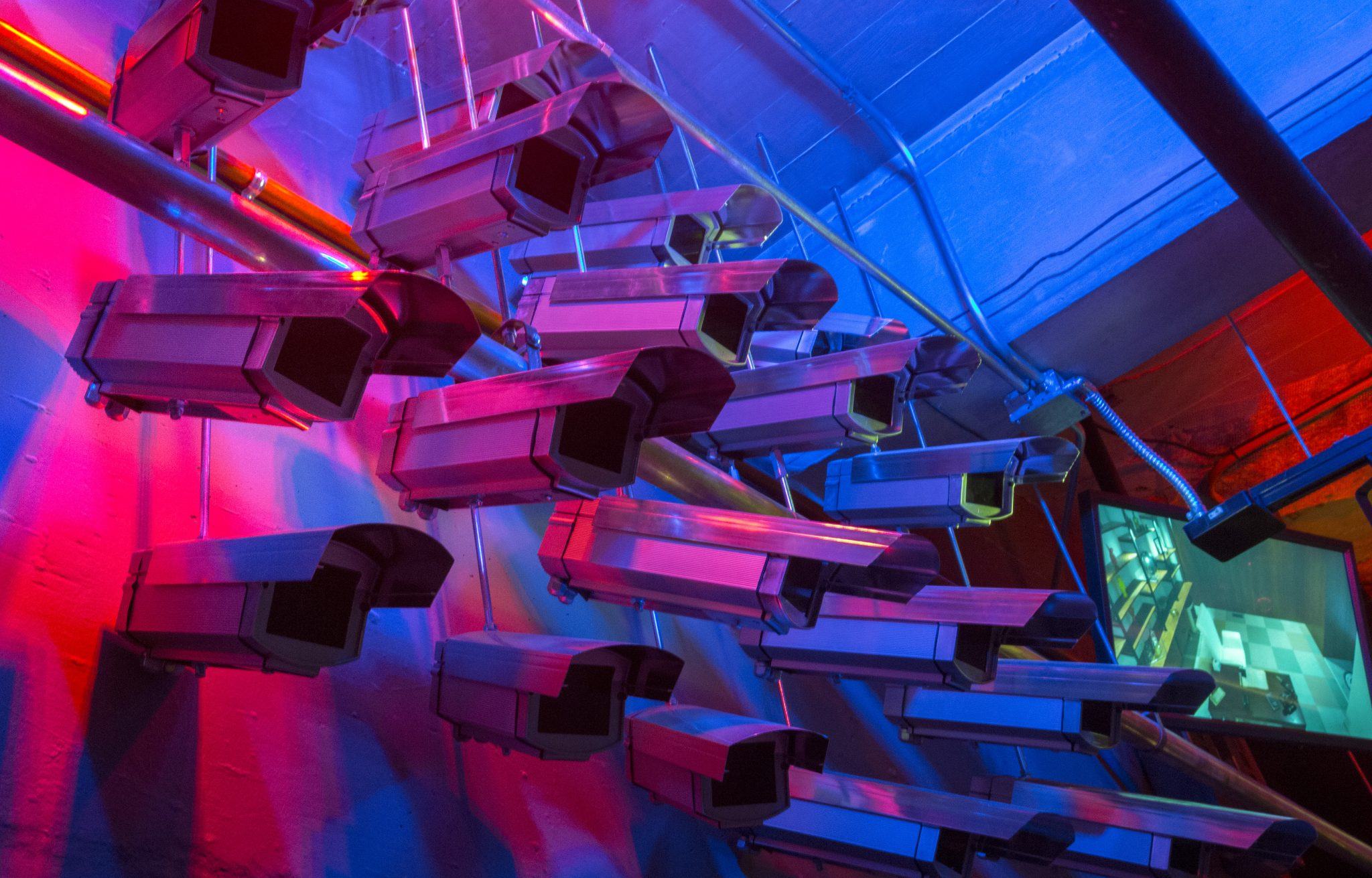 This spy-themed midwestern eatery thrives on secrecy. Based on a CIA safe house, it has a nondescript exterior, and you won’t gain entry unless you know the password. There’s a pre-meal scavenger hunt, sliding bookcases, spy cameras, escape phone booth, an electric chair that pops through the floor, and plenty of other surprises.

Read more: Do You Remember Eating at Any of These Failed Restaurant Chains?