Unless you live under a rock, you’ve probably heard people using the phrase, “Dilly Dilly.” From the grocery store checkout to Twitter feeds to your local news anchors, it seems like this cultural phenomenon has taken over the world.

But don’t feel bad if you’re not exactly sure what it means or where it came from. We’re here to break down the origins, the meaning, and why you probably won’t get sued for trying to sell t-shirts that capitalize on the phrase’s explosive popularity.

It all started as an ad campaign. 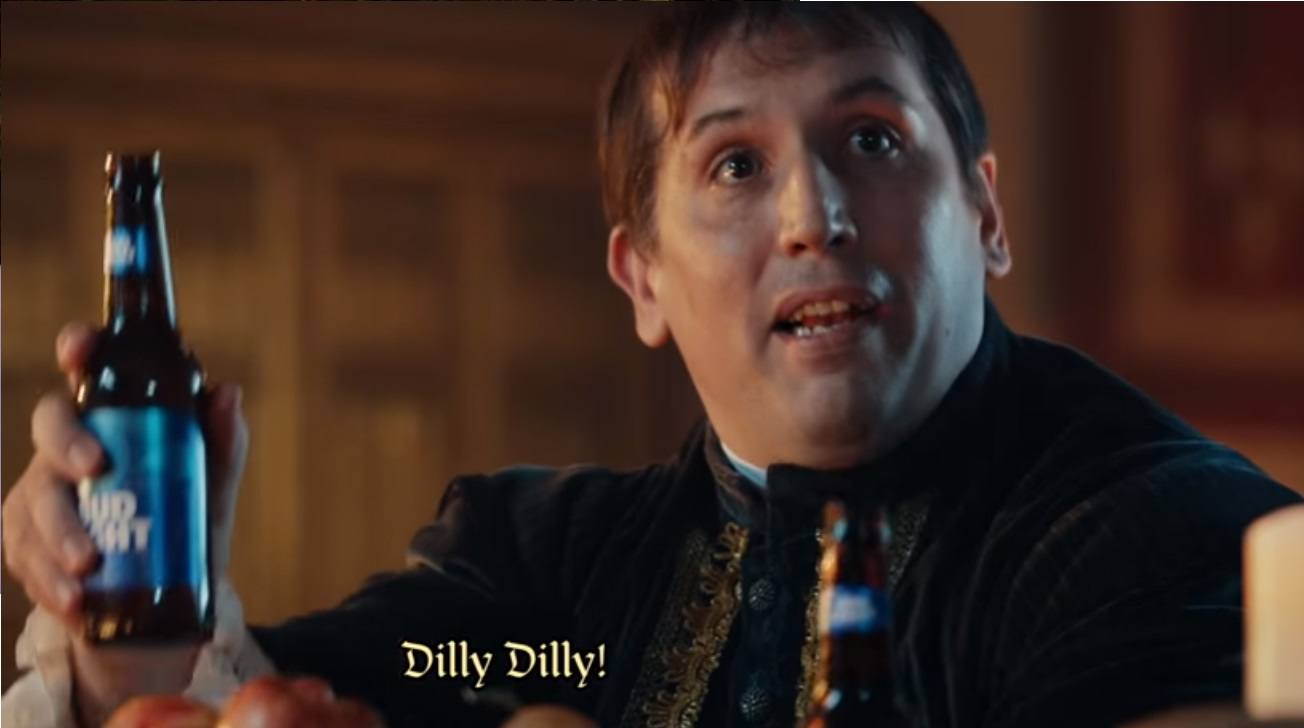 An ad agency sparked the catch phrase. | Budlight via Youtube

You can thank Wieden+Kennedy ad agency for the viral popularity of “Dilly Dilly.”

They started running the ads featuring this new catchphrase in August of 2017 as part of an ad spot for Bud Light. The phrase became so popular that marketing executives continued using the medieval-themed commercials for the rest of the year.

The so-called “Superbowl Trilogy” of Bud Light commercial concluded with the airing of a new commercial called simply “Dilly Dilly” during Superbowl L2 on February 4, 2018.

Next: Here’s the team behind the phrase.

The phrase came out of a brainstorming session. 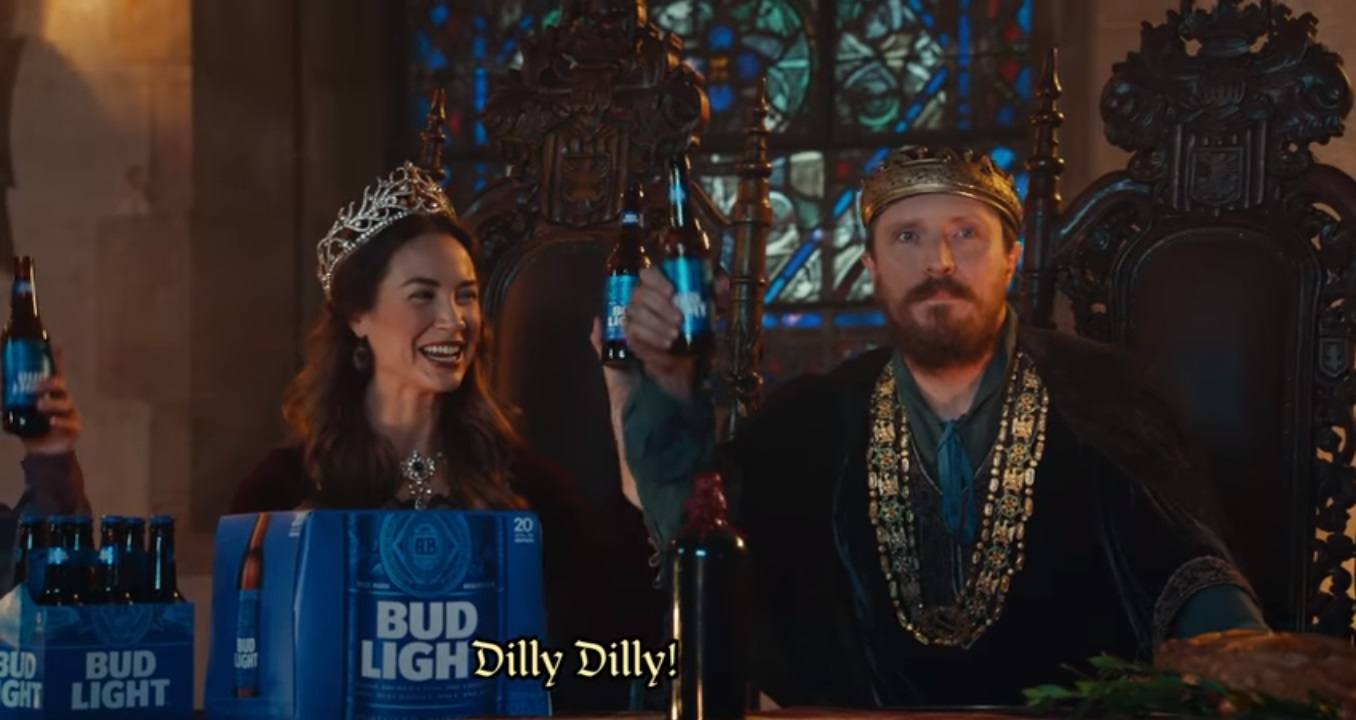 W+K creative directors Brandon Henderson and John Parker told Adweek that “Dilly Dilly” is the result of a brainstorming session. One the creative teams —art director NJ Placentra and copywriter Alex Ledford — said it out loud while throwing a bunch of ideas back and forth. They knew they were onto something when everyone laughed at their suggestion.

Next: This is what it means.

But what does ‘Dilly Dilly’ actually mean? 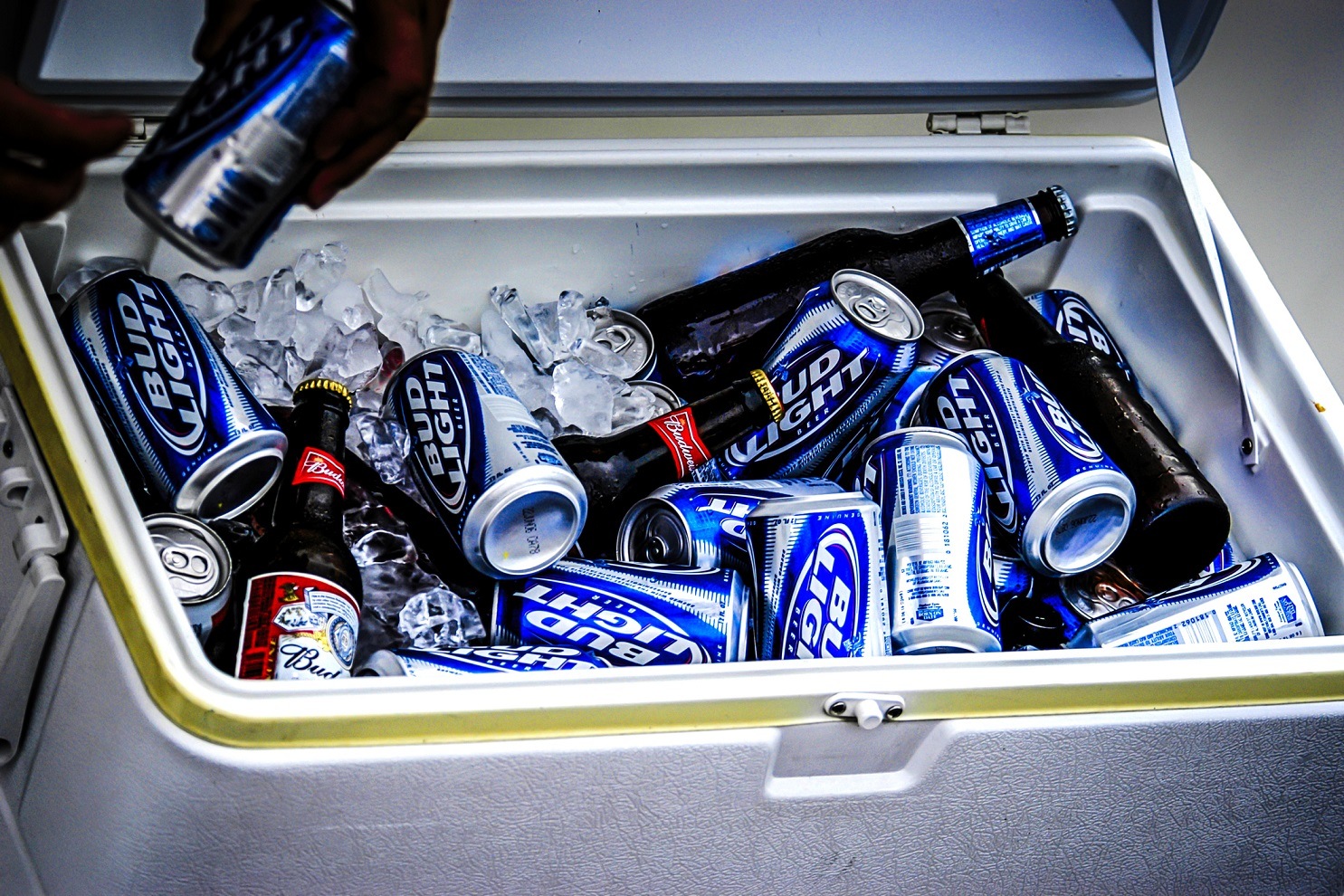 Curious about what the phrase means? Turns out it’s nothing but nonsense.

As Anheuser-Busch InBev Chief Marketing Officer Miguel Patricio told Business Insider during an interview, “’Dilly Dilly’ doesn’t mean anything. That’s the beauty of it. I think that we all need our moments of nonsense and fun. And I think that ‘Dilly Dilly,’ in a way, represents that.”

It’s been equated to a way of expressing approval, sort of like, “Cheers!”

Next: You can find ‘dilly’ in the dictionary.

The word “dilly” does mean something, though 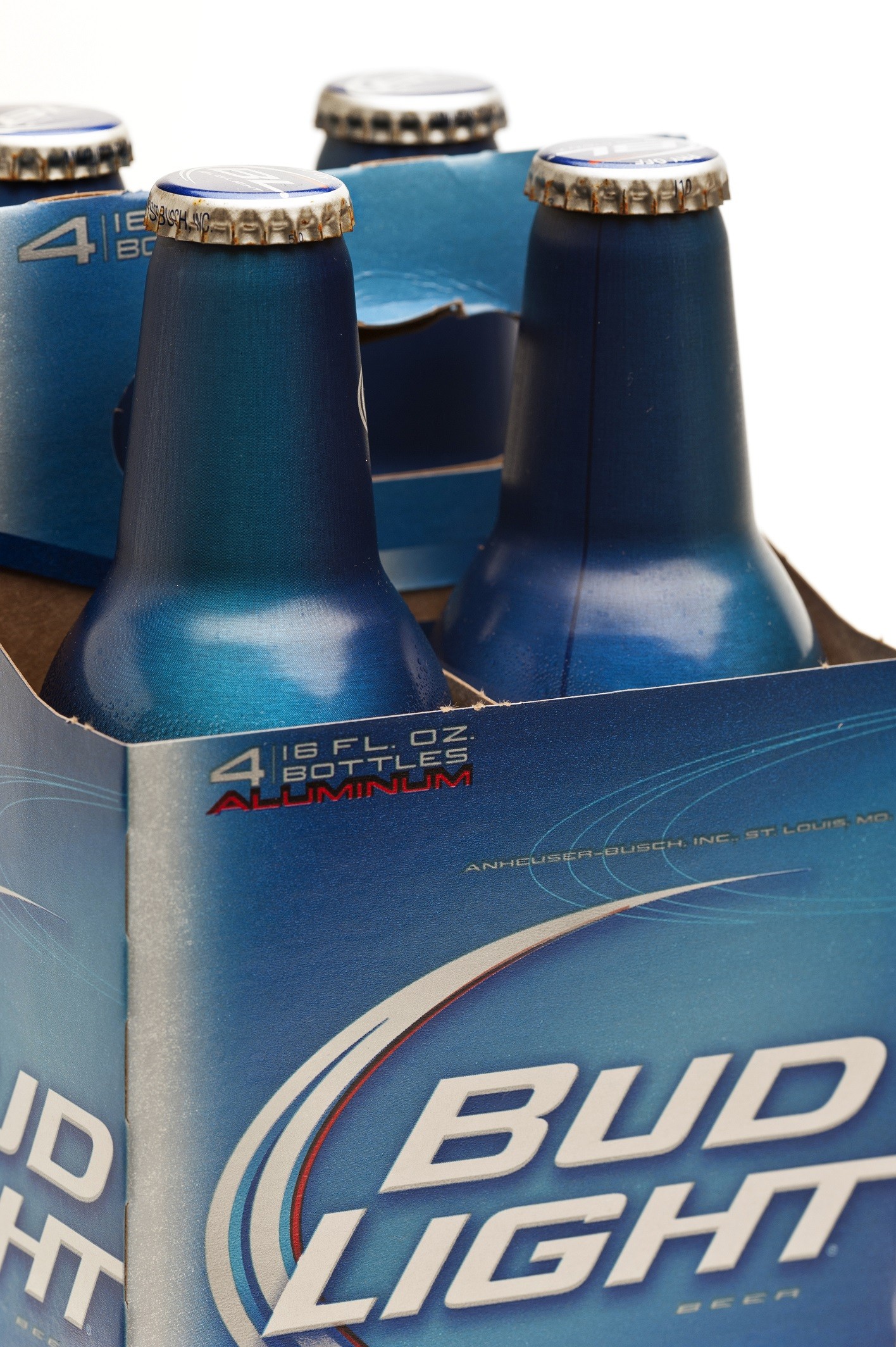 Dilly does have its own meaning. | Juanmonino/iStock/Getty Images

According to dictionary.com, the origins of “dilly” come from shortening either the word “delightful” or “delicious.” On its own, the dictionary definition of the word is, “something or someone regarded as remarkable or unusual.”

References to “dilly dilly” can be traced back to the 17th century. A nursery rhyme called “Lavender’s Blue” uses the phrase repeatedly. Burl Ives recorded the song that was adapted from the nursery rhyme, which was used in the film So Dear to My Heart.

Next: Everyone’s been saying it.

The phrase has taken on a life of its own. 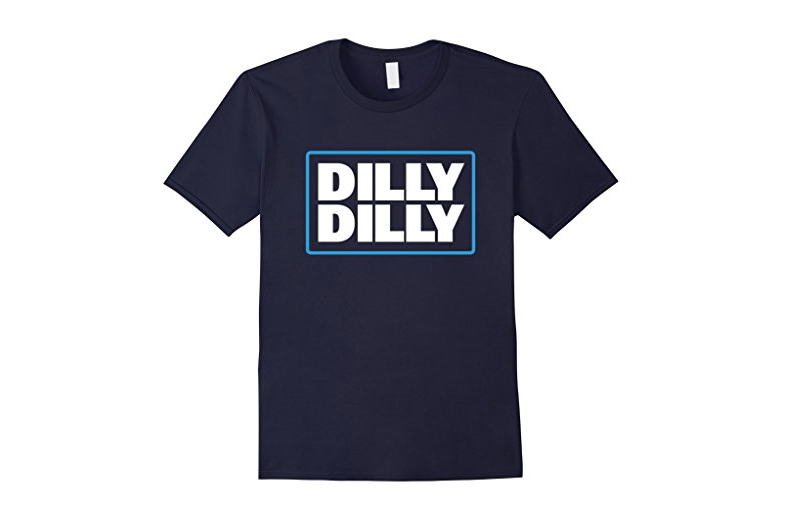 There are even t-shirt now. | Amazon

The ad team wasn’t sure Anheiser-Busch would like the proposed campaign, but it turns out they loved it. Still, neither the client or the ad team could predict the popularity of “Dilly Dilly.”

As Patricio told BI, “I think that one of the proofs of success, nowadays, from a cultural standpoint, is when you go to Amazon and you don’t do anything, there are people already selling t-shirts. Two weeks ago, I went on Amazon. There were like ten different types of ‘Dilly Dilly’ t-shirts. I said, ‘Yes! That’s it!'”

But those T-shirt vendors don’t need to worry — Patricio promises he doesn’t plan to sue them. He’s just glad everyone has jumped on the “Dilly Dilly” bandwagon.

Next: It’s getting the job done.

The campaign is a huge success for Bud Light 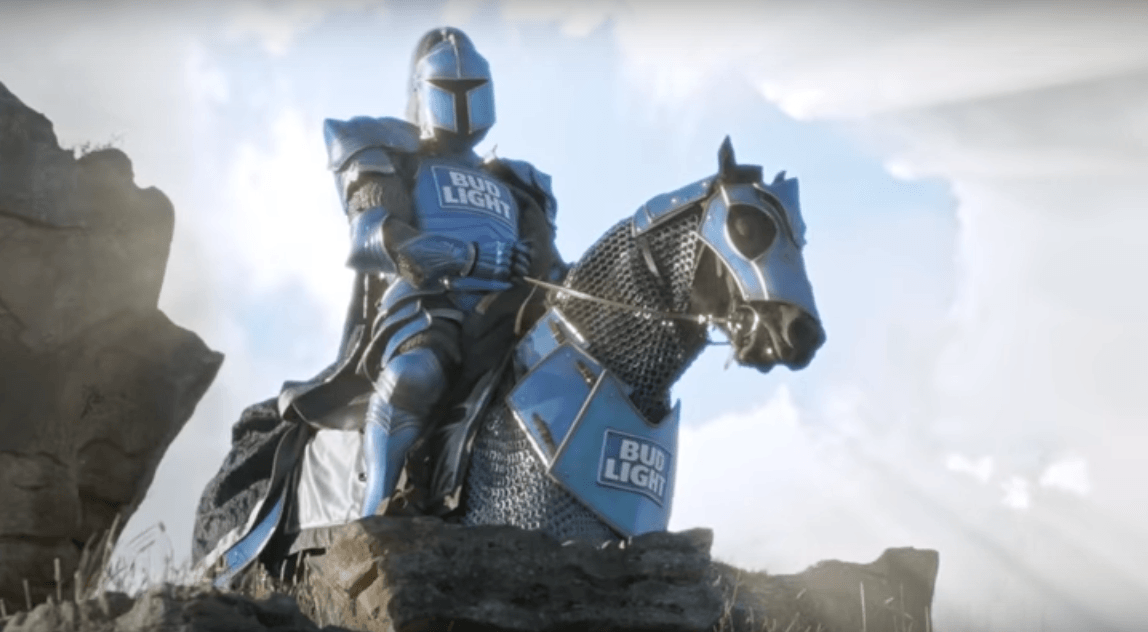 It led to a whole set of commercials. | Budlight via Youtube

The ultimate goal of any ad campaign isn’t just to become part of the national dialogue — it’s to sell products.

In 2017, Bud Light suffered a 5.7% volume drop, but the “Dilly Dilly” campaign has sparked a renewed interest in the brand. VP of Bud Light Andy Goeler explains that it’s a three-step process: get the consumer’s attention with engaging marketing; tie the marketing to the point-of-purchase; and deliver on expectations with the product itself.

“You can create great ads, but if you’re not getting your product into people’s hands, what are you accomplishing?” he told AdWeek. “First, you have to break through and make people want to engage. That’s just step one, but to see us achieving step one on this level is amazing.”

Next: This isn’t the first viral Bud Light campaign.

It’s not the first ad phrase to go viral, and it won’t be the last 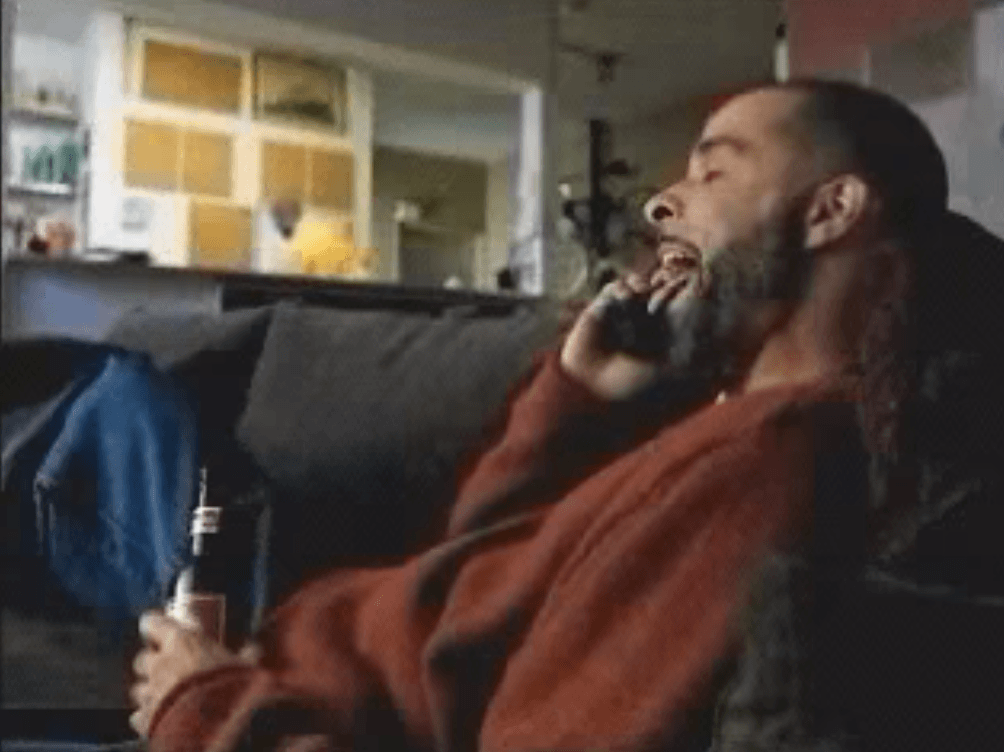 The annoying phrase you heard for weeks after. | Kevin Garnett via Youtube

“Dilly Dilly” is being compared to “Whassup,” an ad spot for Bud Light that went viral in 1999. The phrase is still referenced to this day.

Goeler said, “ I was around and lived through when we had ‘Whassup’ as a campaign, and Bud Light’s ‘Real Men of Genius,’” he said. “You knew you had something very, very special. I have the same feeling here as we’re going through this ‘Dilly Dilly’ phenomenon, that it’s the next ‘Whassup’ and it will be a permanent piece of what people talk about for the brand moving forward.”

Read more: The Most Controversial Super Bowl Ads That Ever Aired