Your Cheat Sheet to Finding the Perfect Whiskey 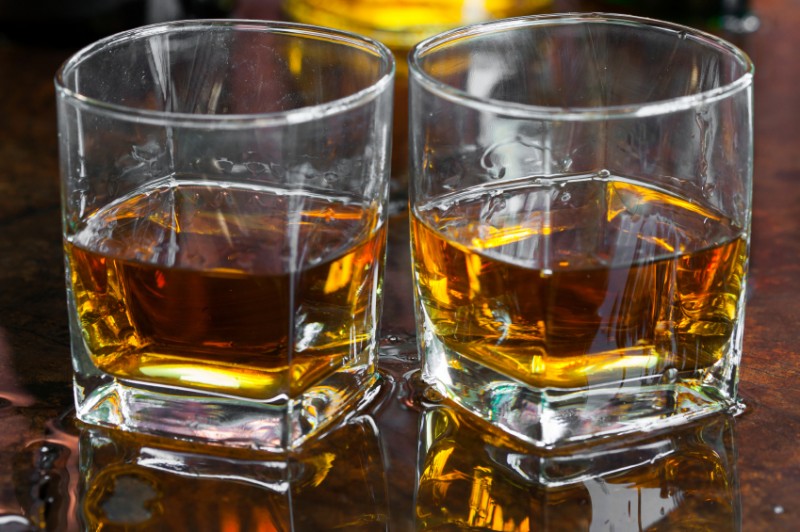 Highlighting the cocktail culture of the 1960s, period piece Mad Men spawned a whiskey revival — one that fed into the changing tastes of the younger generation, who had already begun to favor brown liquors over vodka and gin. The Old Fashioned, once lost in obscurity, now populates cocktail menus across the United States and abroad.

Diving into the realm of whiskey drinking can be daunting. Strong opinions abound, and there are many different brands, varieties, terms, and ways to drink it. Just visiting your local liquor store to survey the selection is perhaps not the best means of education. So if you are fascinated by this liquor, here’s your know-all guide.

Despite its new-found appreciation, whiskey is a very old beverage. It was a currency in the American revolution after a British tax on unlicensed distilleries made Scottish whiskey rare. George Washington distilled it at Mount Vernon and named it his favorite vice. But even that moment is relatively recent in the liquor’s history. Some shaky evidence suggests that distillation began with the Babylonians in Mesopotamia in the second millennium B.C. The modern whiskey tradition began after the distillation process eventually spread from the Greeks to the medieval Arabic culture to the medieval Latins. The earliest distillation of alcohol came in 13th-century Italy, with wine. Alcohol distillation spread between monasteries, primarily as a cure for ailments such as small pox. It reached Ireland and Scotland no later than the 15th century.

Whisky distillation did not stay in the monasteries; it soon moved to the secular realm via the medical profession. And when Henry VIII disbanded monasteries in Scotland, many monks made their livings by distilling whisky. Still, whiskey was in its infancy. It was not allowed to age, and as a result, it was potent and the flavor was raw and unpalatable. It took time for the flavor to become mellow.

In the United States, whiskey’s popularity was driven by the destruction of France’s brandy industry by pests and the fact that, during Prohibition, the government allowed whiskey to be sold by pharmacies via prescriptions.

Oh, and, whisky denotes Scotch or Scotch-inspired whisky, while whiskey refers to the Irish and American versions. The word itself is an Anglicization of the Gaelic word uisce or uisge, meaning water. In Latin, distilled alcohol was known as aqua vitae, or water of life.

How whiskey is made

There are three basic building blocks: the grain, the still, and the barrel. Whiskey is made from a fermented grain mash, then aged in wooden casks, generally made of charred white oak. But in actual practice, there is much more nuance than that explanation would suggest. A variety of grains can be used, including barley, corn, rye, and wheat.

The statutory minimum in some countries is 40% alcohol by volume.

The labeling of whiskey is often misleading. A label may boast of a distillery’s 150-year-old tradition, but a big corporation actually owns it. It may explain that 47 whiskeys are in the blend, but a cheap one actually makes up the majority. And likely, the distillery uses the same pre-malted barely as all its competitors.

Leaving labeling aside, here’s some basic information on the whiskey you’re drinking:

Whiskey’s flavor comes from the grain, the still, and the barrels. Each element requires the distiller to make choices, and those choices have created approximately eight different whiskey-making traditions, although only four are commonly used.

1. Malt Whiskey — This is the oldest style, made from 100% barley malt and distilled in pot stills. Generally, these whiskeys are approximately 70% alcohol, and boast a rich and creamy texture with notes of honey, apricot, dark chocolate, and smoke. And the prime age falls between 10 to 20 years. The category includes single-malt Scotches, where single means all the whisky in the bottle comes from the same distillery, and blended-malt Scotches, where the whisky comes from different distilleries. Japan, France, India, and the U.S. all produce malt whiskeys as well. They are aged almost always in used cooperage.

Glenlivet is a good example.

2. Grain Whiskey — These whiskeys are distilled primarily from raw grain, and are never pure malted barley. These whiskeys can have an alcohol content of as much as 94%, and boast a light and clean texture with lightly spicy notes. And the prime age falls between four to 10 years. Because these whiskeys are lighter, they are often used as a blending partner for louder malts or straight whiskeys. They are aged almost always in used cooperage.

Greenore’s 8-year is a good example.

Bourbon falls into this category. The Federal Standards of Identity for Distilled Spirits mandates that bourbon be made in the United States, from a grain mixture of 51% corn, aged in new oak barrels, and be distilled to no more than 160 proof.

4. Straight Whiskey — This type of whiskey was born in 18th-century Ireland, when the British government began taxing distillers depending on how much malt they use, reports Esquire. Irish distillers lowered the share of malt to 15% and substituted raw barley, rye, oats, and wheat. This change made the whiskeys more pungent, so producers added a third round of distillation. In the 1950s, distillers dropped the rye, oats, and wheat, but the rest of the process remained consistent. These whiskeys can have an alcohol content of as much as 85%, boast woody and spicy notes when young and sweeter notes with toasted coconut when older. And the prime age falls between four to 20 years.

The Green Spot single pot-still whiskey is a good example.

Whiskey is not all about the taste, as with wine. But wine tasting and whiskey tasting are very different. Use a nosing glass, as it concentrates the flavors toward your noise. First, look at the color of the whiskey, to make sure the glass is clean. And remember, a dark whiskey isn’t better than a light variation. Tilt the glass 45 degrees and spin it all the way around. The resulting ring will drip down the glass, and the tear’s thickness is a clue to the alcohol content. Also, the slower the drip, the more flavor the whiskey has. Although, how good the flavor remains to be seen. There is no need to swirl whiskey as there is with wine because of its higher alcohol content. You then sniff the whiskey three times; the first sensation is a tingle, next comes a sweet flavor, and last is a fruit flavor. Keep in mind the flavors you taste are entirely personal.

Below master distiller Richard Paterson explains how drink your whisk(e)y:

The favored cocktail of Mad Men’s Don Draper and Mad Men aficionados, the Old Fashioned was first perverted by candied fruits and club soda, then thrust into obscurity, before its revival. “Twelve years ago, it was nowhere,” the cocktail historian David Wondrich told The New York Times in its 2012 history of the drink. “You could go into an old-man bar, and if you insisted, they would make you one.” The debut of Mad Men coincided with a resurgence of the craft cocktail and increasing interest in old-school drinks among both mixologists and laymen. And the result is a cocktail culture in which gastronomical notions of a true Old Fashioned have swerved into “ideological tenets,” writes Slate’s Tory Patterson. And how you like your Old Fashioned “says something serious about your philosophy of fun,” he adds.

Throughout its history, the Old Fashioned has been both the manliest cocktail order and the drink of grandmothers. But simplicity is the hallmark of the original drink. As The New York Times reports in its historical overview, it was invented in the 19th century as an antidote to the popular cocktails of the day, which were overloaded with flourishes. Patterson notes that the Old Fashioned in its earliest (and arguably most authentic) iteration was a lump of sugar, moistened by the bartender with a Angostura bitters, rounded out by a cube of ice, “neither too large or too small” and a miniature bar spoon, and passed to the client with a bottle of good bourbon. The drinker then poured his own measure of liquor at a price of 15 cents. By the 1930s, however, taste was straying from tradition, at least according to one disgruntled writer to the editor of the Times. He signed his 1936 complaint, “Old Timer,” and protested the deviation from the original: liquor simply sweetened and seasoned.

Following is the recipe, adapted from cocktail historian David Wondrich: