You’re My Best Friend: 17 Unlikely Animal Friends That Will Surely Melt Your Heart

We all know that dogs and cats don’t get along. Cats and mice also mix like oil and water. And domestic pets never make friends with wild animals. Right? Maybe not. These unlikely animal friends will challenge everything you know about the animal kingdom, and maybe make you rethink your own prejudices, too.

1. The real-life fox and the hound 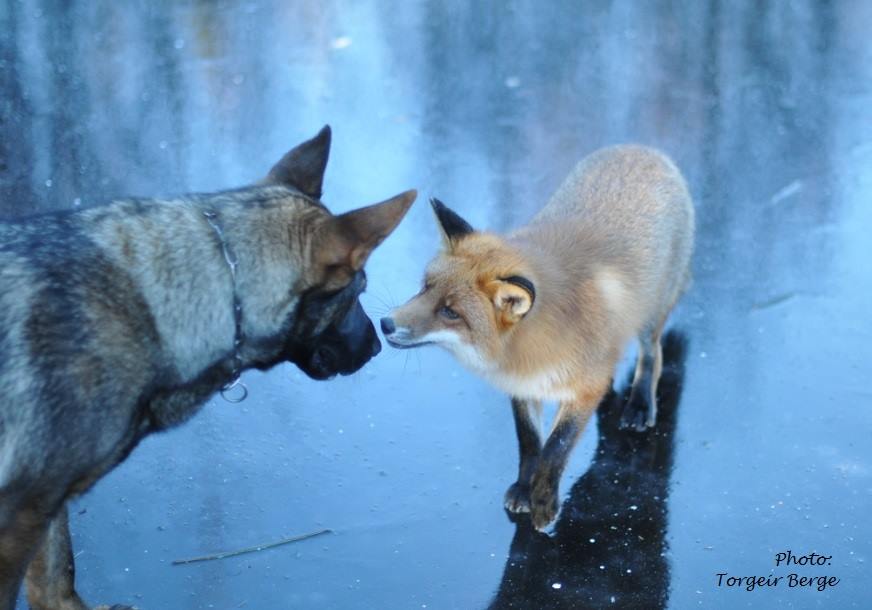 If you saw Disney’s The Fox and the Hound as a kid, you will love Sniffer the wild fox and Tinni the domestic dog. They met in the woods in Norway, and became the best of friends. Tinni’s owner, photographer Torgeir Berge, has documented every adorable moment between the two. He and writer Berit Helberg even wrote a book about the duo. Called The Fox and the Dog, it features fairy tales based on their friendship.

Next: This trio proves another Disney favorite can come true. 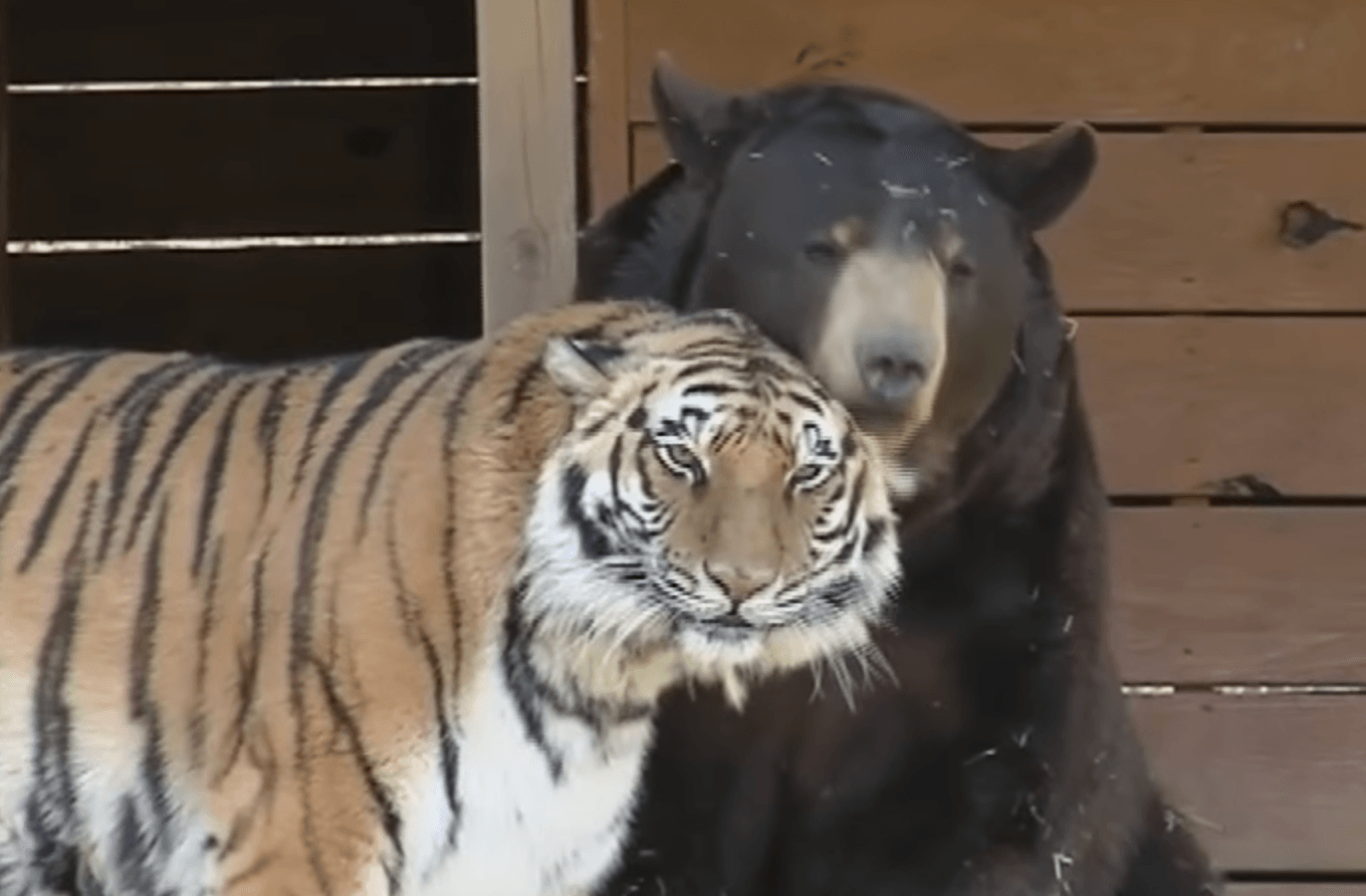 They all grew up together. | Around Atlanta via Youtube

The Jungle Book comes to life at an animal sanctuary, where a lion, tiger, and bear all live in the same enclosure. This adorable trio got rescued from a drug dealer’s home in Atlanta, and now all three live in at a Georgia animal sanctuary together. Because they grew up together, they love each other and cuddle. At the same sanctuary, a black bear and bengal tiger also hit it off, proving inter-species relationships can work.

Next: The size difference between these two does not matter to them.

3. Bubbles the elephant and Bella the black lab 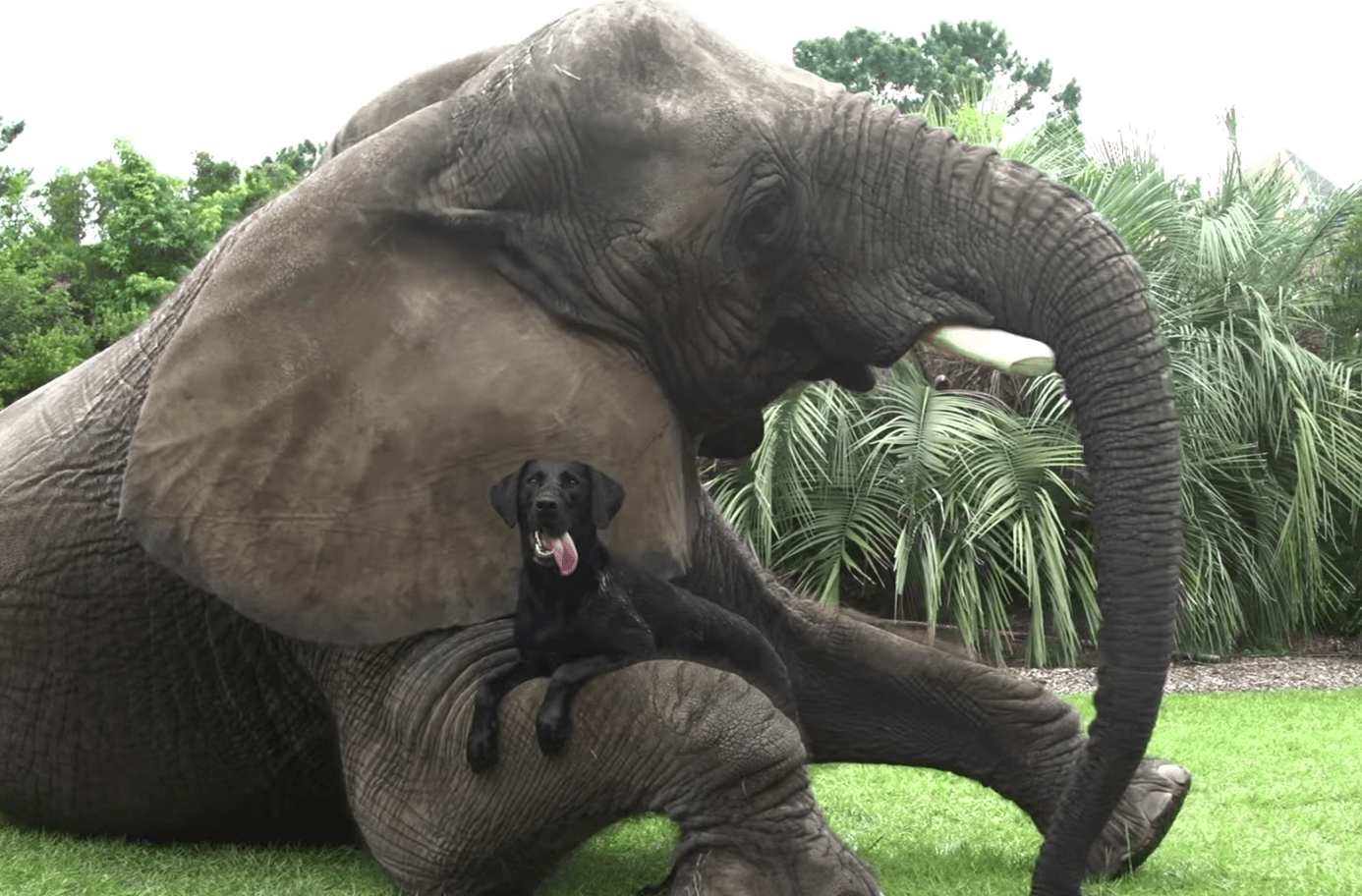 They love playing in the water together. | bouju1 via Youtube

Bubbles the elephant and Bella the black Labrador get along great, even playing catch together. The unlikely best friends live at Myrtle Beach Animal Safari, after Bubbles got rescued as an orphan in Africa. Bella and Bubbles cuddle, splash in the water, play catch, and generally pal around. The duo even found fame on the big screen, starring in Ace Ventura II, Malaika, and a Janet Jackson music video.

4. Bonedigger the lion and a family of wiener dogs 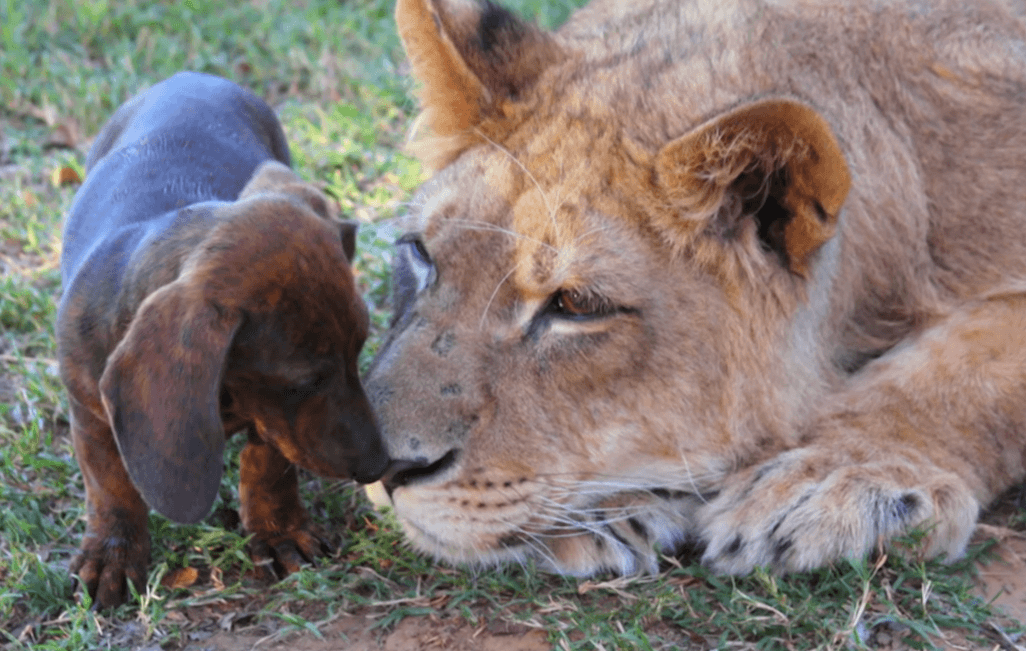 At G.W. Exotic Animal Park in Wynnewood, Oklahoma, Bonedigger the lion loves his little sausage dog pals. Daschunds Milo and Abby in particular pal around with the gentle giant, who became partially disabled due to a bone disease. They share meals, romp around, and the dogs even clean Bonedigger’s teeth after he gets done eating. Now that’s love.

Next: These anxious animals found a calming influence.

5. Carlyle the yellow lab and his Cheetah pals 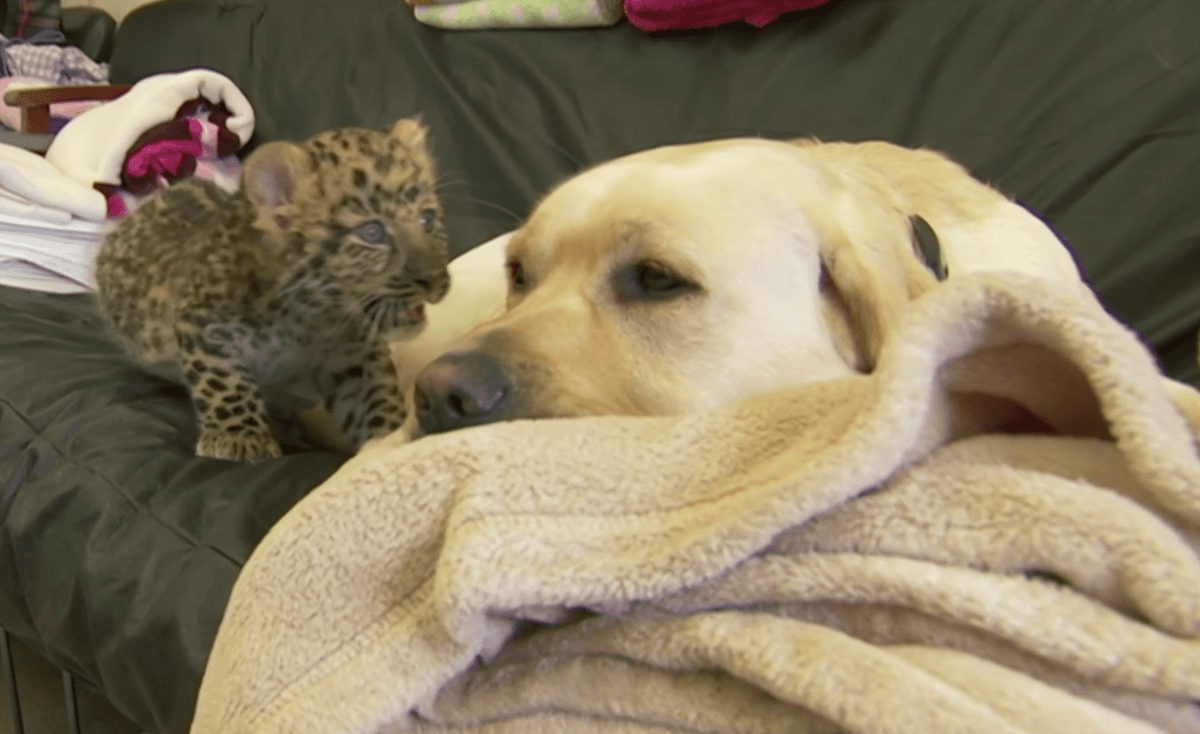 The two have become best friends. | Love Nature via Youtube

At the Columbus Zoo in Ohio, the African Cheetahs have found an unlikely friend in Carlyle, the yellow labrador. In Africa, dogs protect humans from wild cheetahs, but in the states, the two have become best friends. Carlyle and the zoo’s cheetahs — naturally social creatures — grew up together. Today, they travel the country raising awareness about the exotic cats. In between, they cuddle just like blood brothers.

Next: These two share a love of the shade — and each other.

6. Little Bear the cat and Sequoia the bear 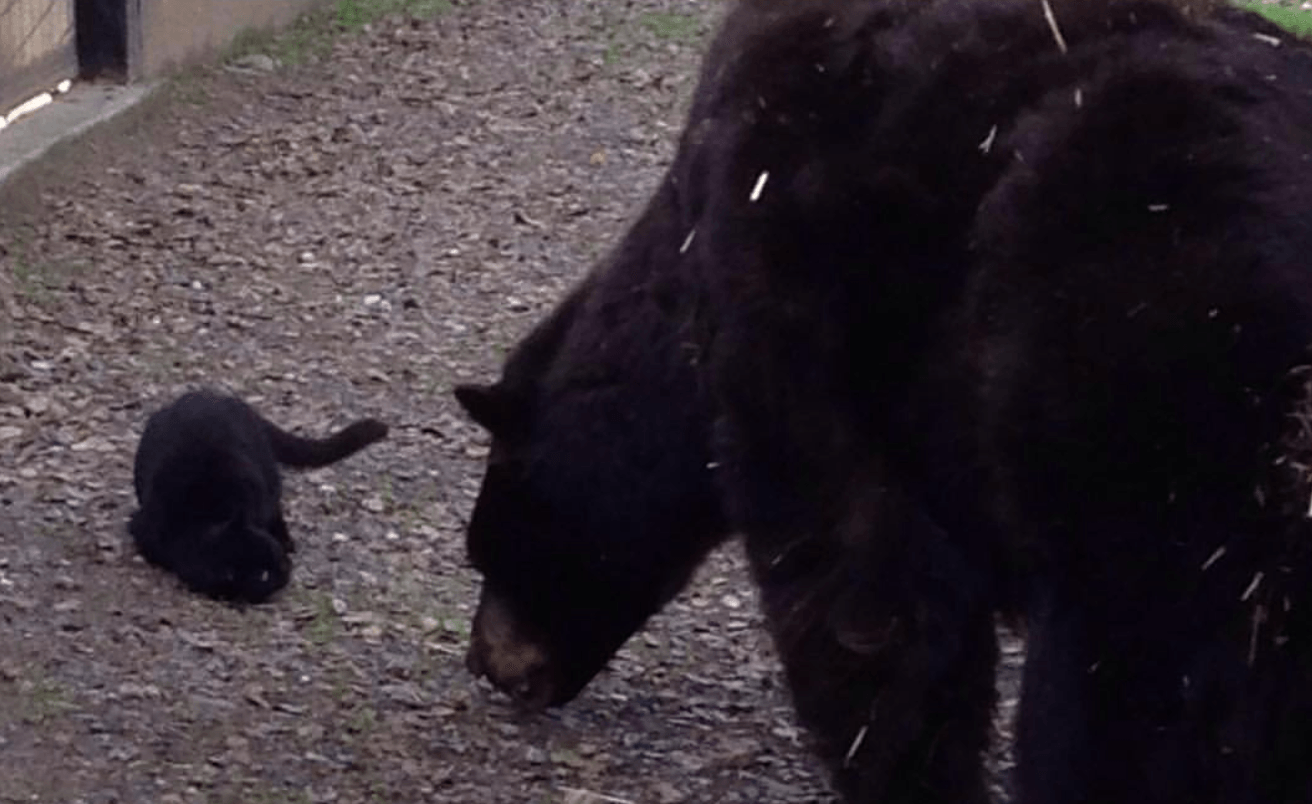 That is one fearless feline. | Folsom City Zoo Sanctuary via Facebook

One day, a black cat started wandering into enclosures at Folsom City Zoo. When zookeepers took notice, they started leaving food for the cat, who they named Little Bear. That name may have held a prophecy, because the little black housecat quickly made friends with a 900-pound black bear named Sequoia. The two elderly animals nap in the shade and share meals together, keeping each other company.

Next: These two species rarely appear together, but these two formed a unique bond.

7. Barclay the golden retriever and Rudy the duck 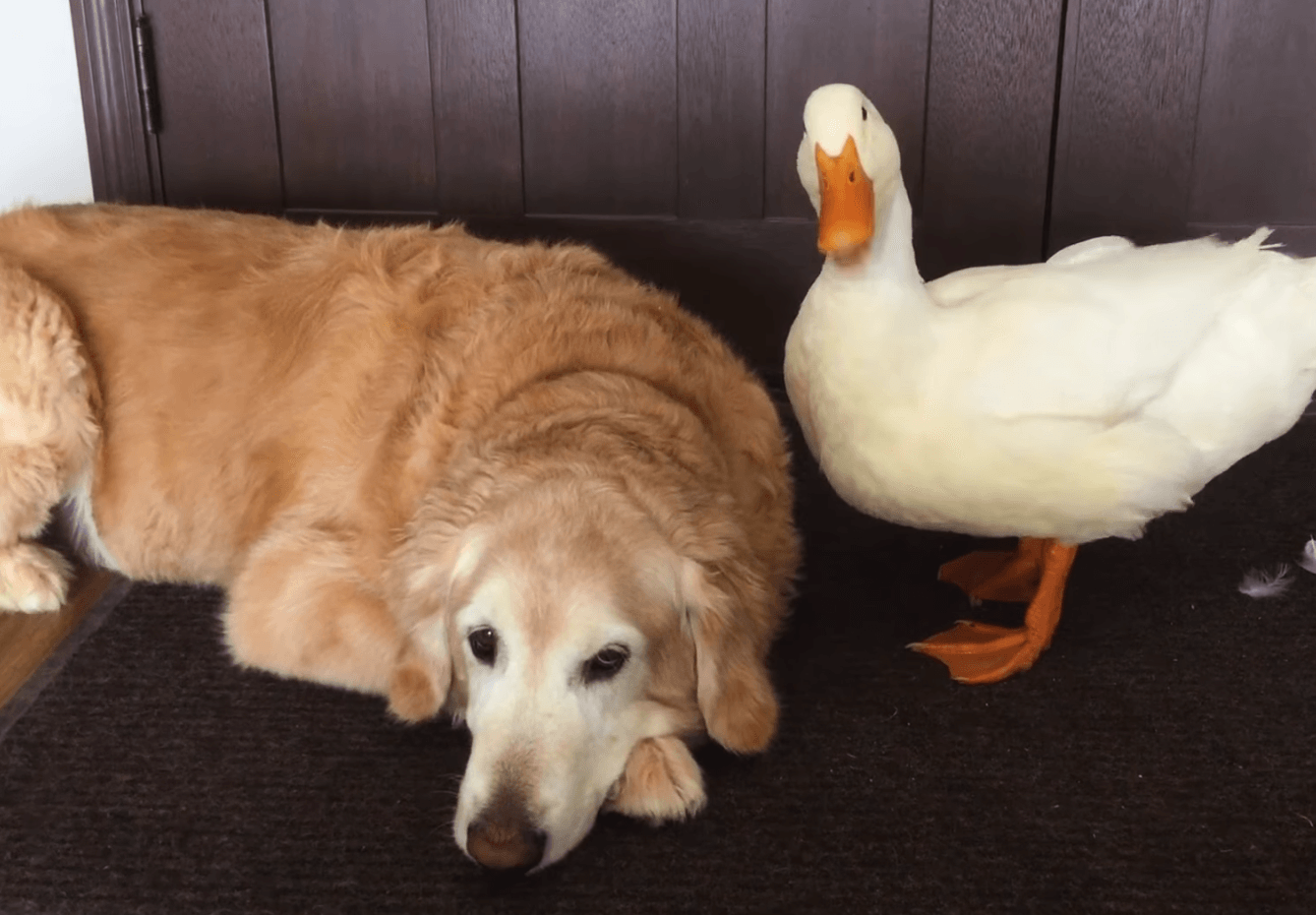 Pam Ishiguro keeps a flock of seven ducks, but 4-year-old Pekin duck Rudy and golden retriever Barclay have become the best of friends. The Orange County-based mom said the two behave just like her sons. “When they are together, somebody is always chasing or jumping on someone else, but when they are apart, they’re always calling for each other.”

8. Dogs and horses get along great 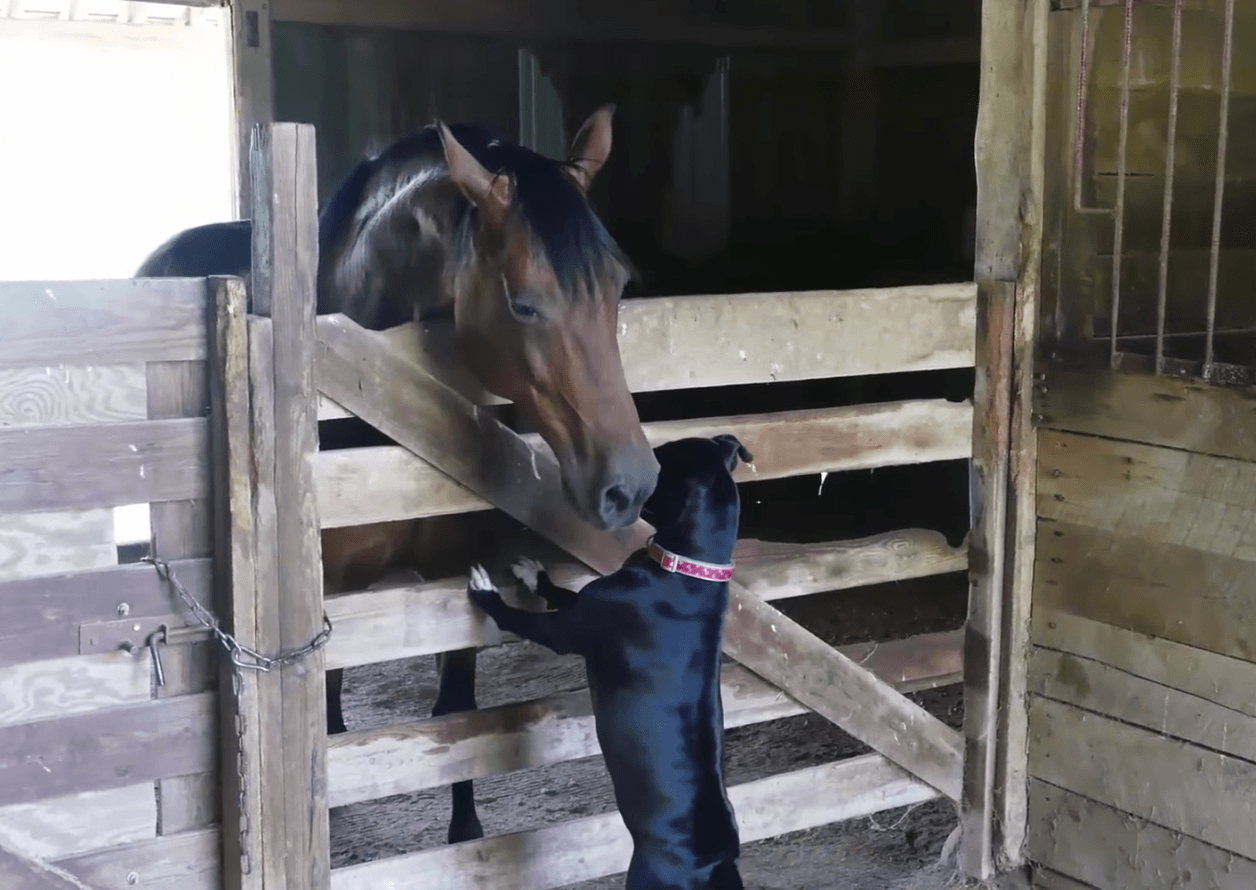 They both love to play and romp through the fields. | ViralBe via Youtube

Even though they come in vastly different sizes, the playful nature of dogs and horses seems to make them perfect pals. It checks out, when you consider their love of romping, that the two species would get along well. Try not to smile at these pairs. We dare you.

Next: When a deer wandered into this dog’s backyard, you will never guess what happened.

9. Pip the wild deer and Kate the dog 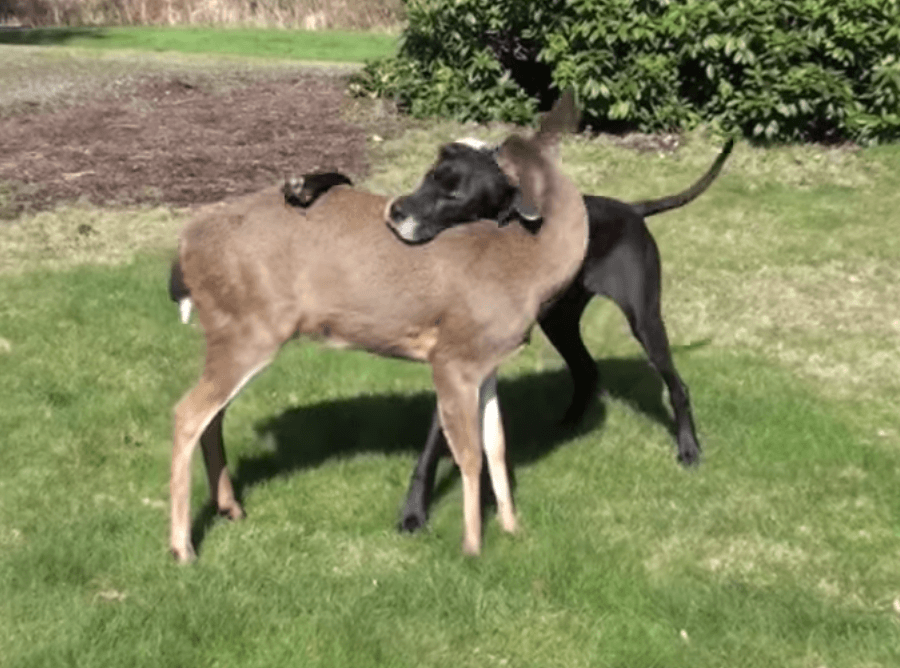 Pip comes over for visits. | isobel springett via Youtube

A lack of fences left Kate’s backyard open to interlopers, and it resulted in a new best pal. Pip the wild deer comes over to play with the black dog, and the two really hit it off. While hunters sometimes train dogs to help run down deer and other species, Kate clearly did not receive those instructions.

10. Sam the Bengal and Pip the otter 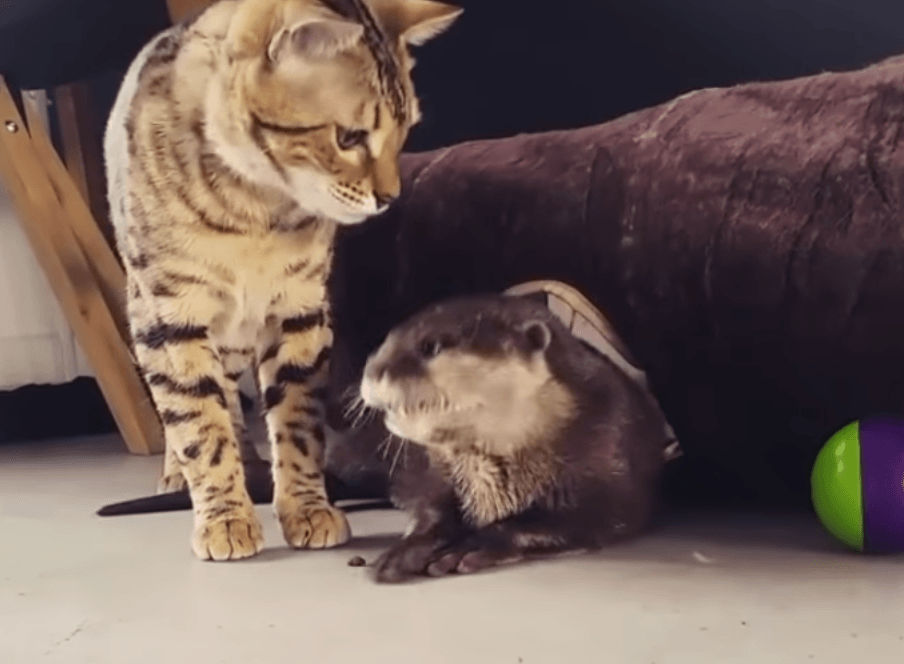 There’s basically a zoo in that house. | Bengal Cats via Youtube

Otters may seem like marine cats, but never more so than when they play with actual kitties. Sam the Bengal cat and Pip the otter play just like two kittens might. They also live with a parrot, making their home quite the varied menagerie.

Next: These unlikely animal friends definitely would not get along in the wild.

11. A tame coyote and his cat buddy 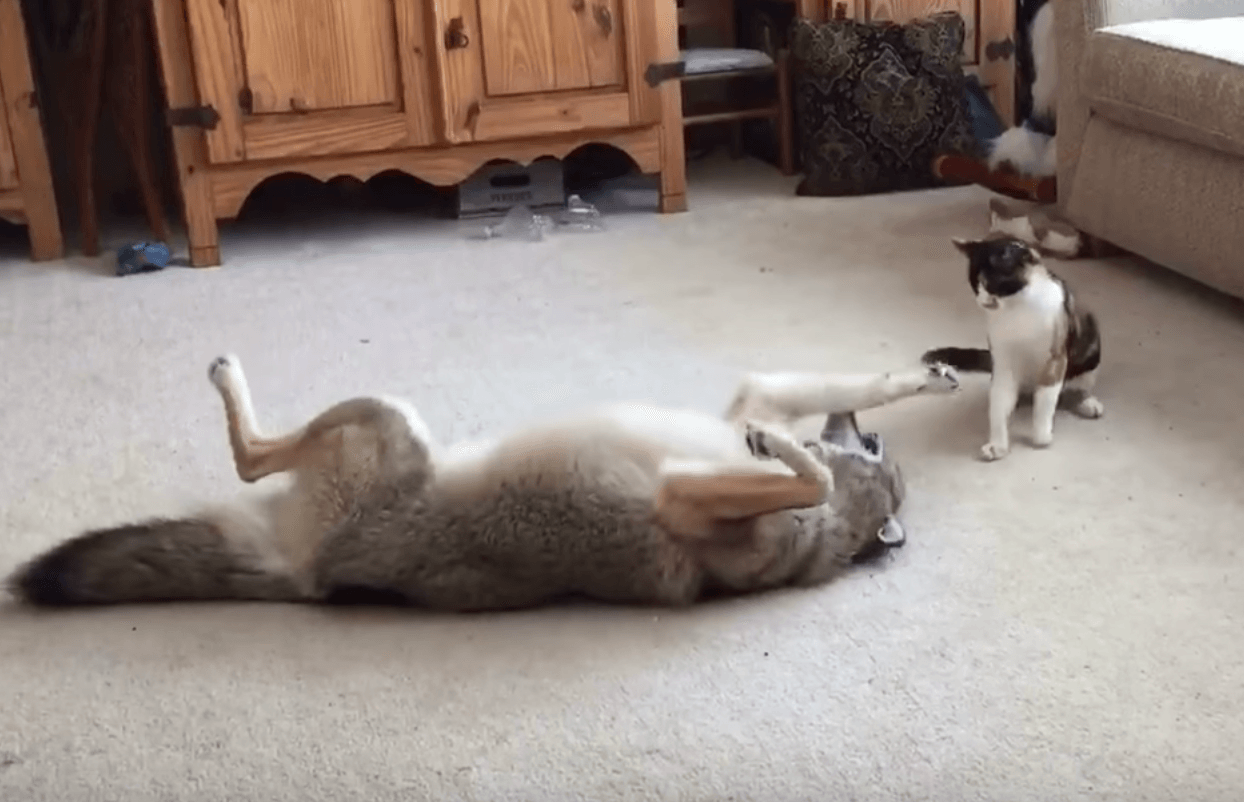 They are one of the most unlikely pairs. | DailyPicksandFlicks via Youtube

Cats have a reputation for disliking dogs, but what about their wild cousins? When this family started raising a coyote pup, it could have gone either way. Luckily, their cat and the coyote get along great, making them the best of unlikely animal friends.

Next: This cat’s maternal instinct overrode her primal urges. 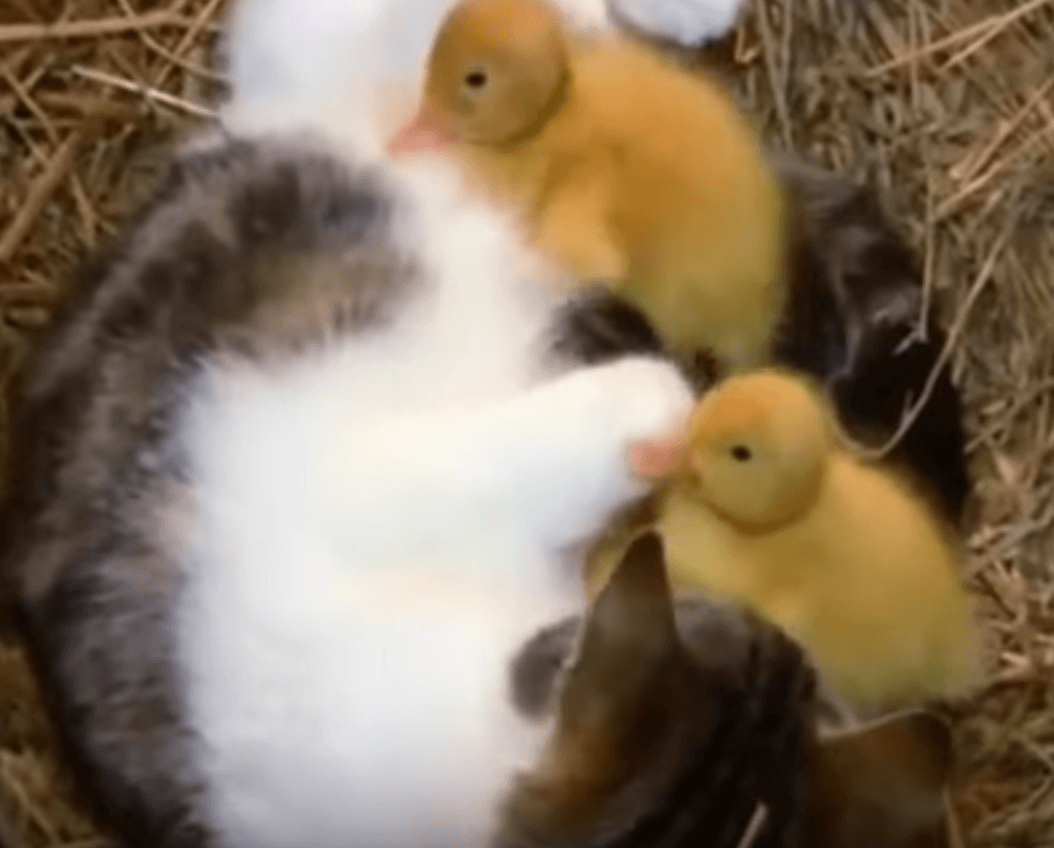 The cat became their surrogate mother. | Andy Howard via Youtube

At this small hobby farm, the owners originally thought their cat had gobbled up their newborn ducklings. Then they discovered something surprising. The cat actually took over as the ducklings’ surrogate mother, keeping them warm and cozy as they grew. Sometimes, a mother’s love really does conquer all.

Next: In Japan, people can’t resist this adorable pair.

13. A cat and an owl both call a coffee shop home 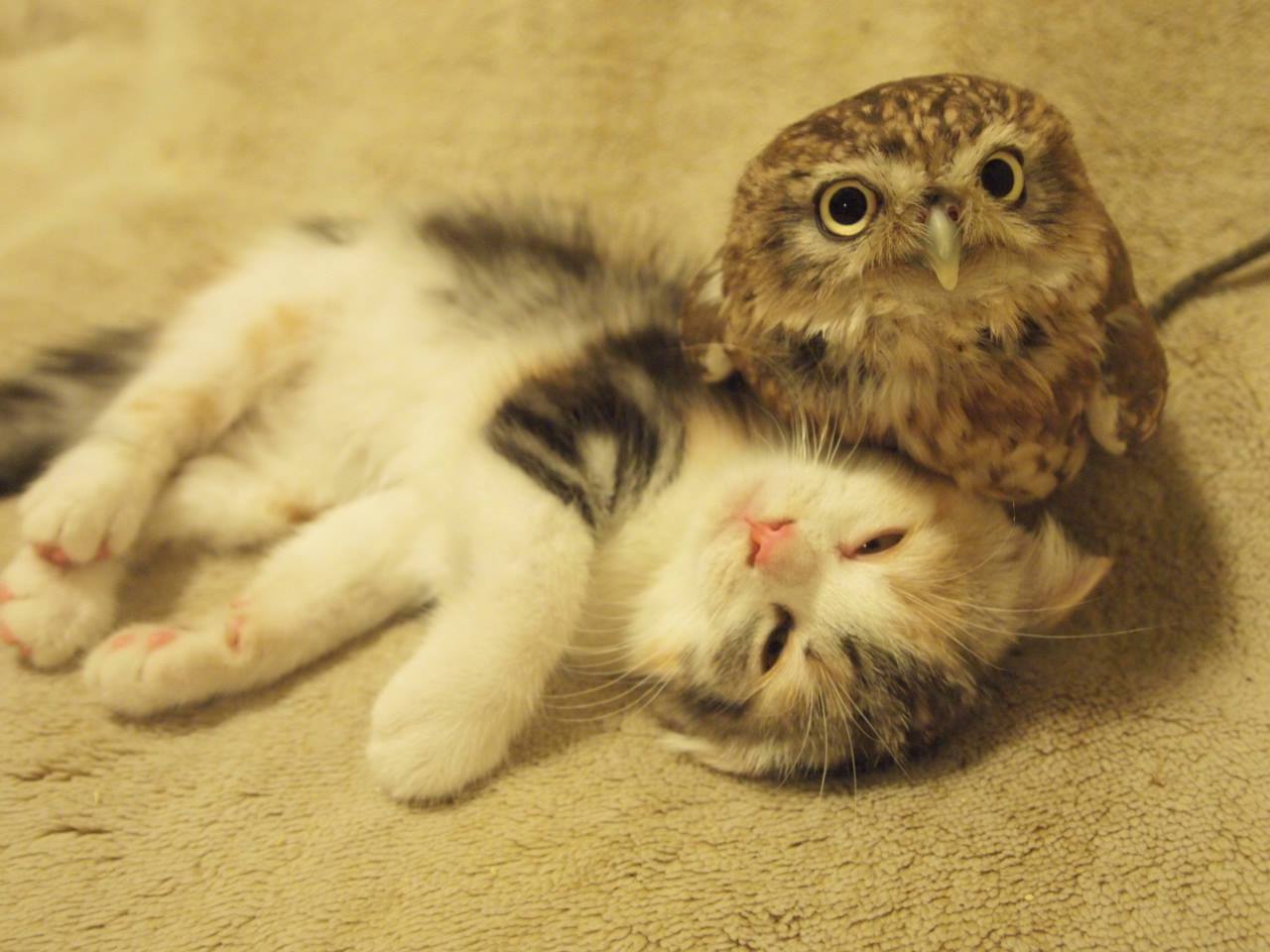 They hit it off right away. | Hukulou Coffee via Facebook

At the Hukulou Coffee shop in Japan, an owl and a cat have become unlikely friends. Fuku-chan, a 5-year-old owl and Marimo, a 2-month-old Scottish Fold kitten, hit it off right away when the owners brought home the kitten for the lonely owl. Fuku-chan, who is about the same size as a smartphone, had gotten lonesome at the shop. Owner Ritsuko Nagahara put the pair together because they look alike. Now, they can’t separate them.

Next: This dog might not totally understand his new friend.

14. Suryia the orangutan and Roscoe the hound dog 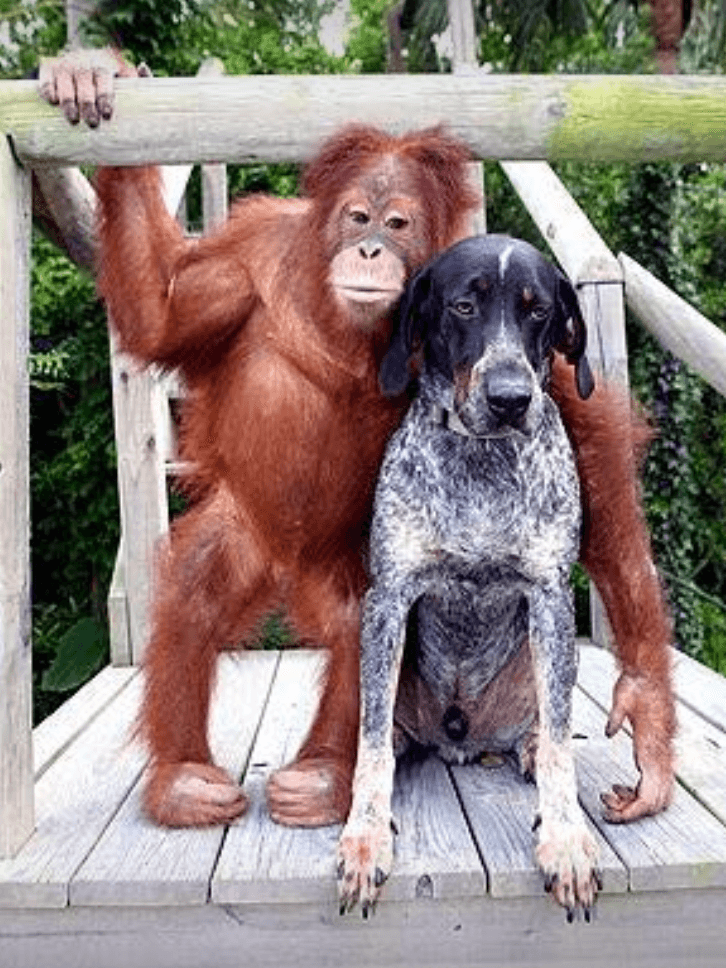 He’s just a hairy person to the hound. | T.I.G.E.R.S. Preservation Station via Facebook

At T.I.G.E.R.S. animal rescue near Myrtle Beach, one of their rescued orangutans made an unexpected buddy. Roscoe the Blue Tick Hound loves to hang out with the adult ape. Some trainers think Roscoe might see Suryia as a strange, especially furry person. We can’t ask either animal whether that makes sense to them, but their friendship warms our hearts regardless.

Next: You won’t believe this lion cub’s friends.

15. A lion cub loves these meerkats 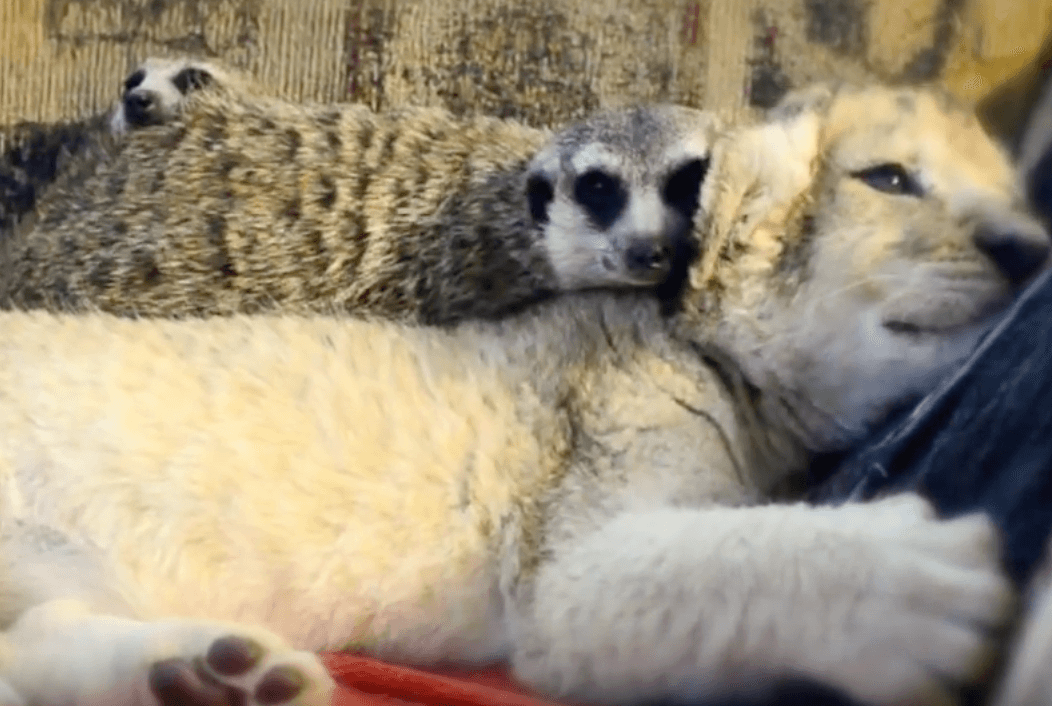 It happened in The Lion King, but can a baby lion really make friends with a meerkat? At this South Africa big cat sanctuary, he can. The lion cub became pals with this crew of meerkat babies while he got bottle-fed by the sanctuary’s owner. Their friendship might not make it past the lion’s adulthood, but it’s very cute now.

Next: These unlikely animal friends have one important thing in common.

16. Puppet and Puff the lizard and cat 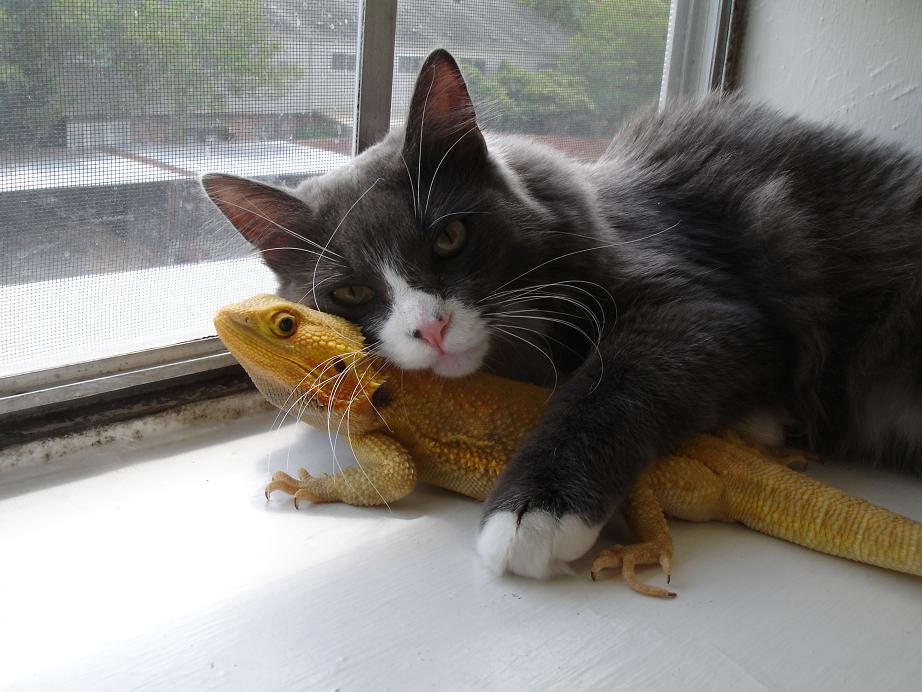 They’re always down to cuddle. | Puppet and Puff via Facebook

Both lizards and cats love to lay around in sunny spots, so it makes sense they would get along. Puppet and Puff the bearded dragon and fluffy cat spend all day cuddling. Since cold-blooded lizards need warmth to raise their own body temperatures, they probably love a fluffy friend. We wonder if they also compete for sun, or if they’ve learned to share.

Next: This giant rodent takes care of litters on a regular basis. 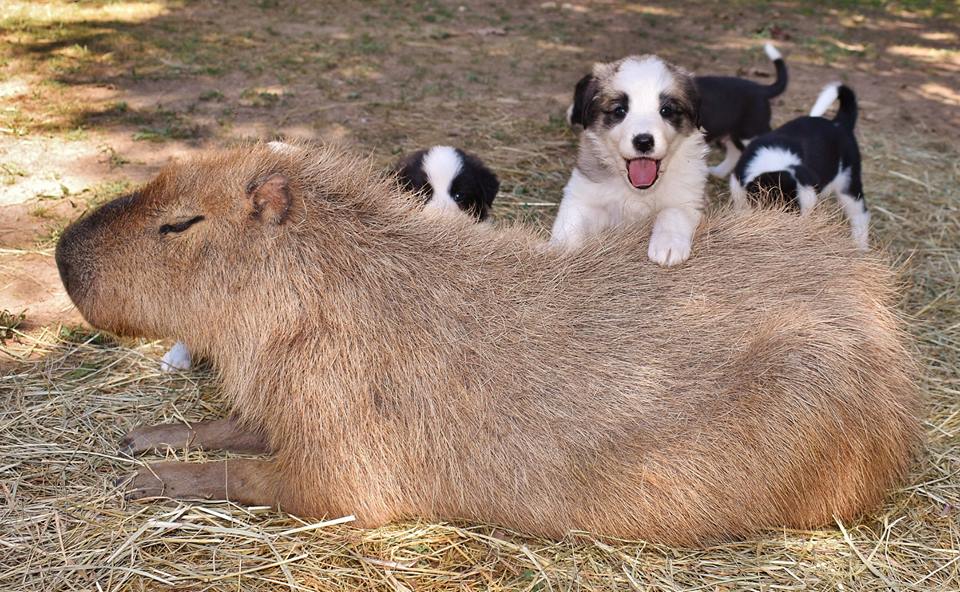 At Rocky Ridge Rescue, owner Janice knew she had to put a litter of puppies somewhere after they got too big to stay inside the house. Cupcake the capybara lived in the most secure pen, so she tried it out. The giant rodent took to foster parenting right away, and has subsequently taken care of every litter since. She enjoys raising the puppies like her own, and the pups seem to love her too. It just goes to share how strong mothering instincts really are.