Crazy Movie Stunts That Tom Cruise Did Himself

Most actors tend to take the backseat when it comes to stunts, but Tom Cruise is a huge exception. The actor tries to do most of his stunts himself and has even come up with some of the most dangerous ones.

So which crazy movie tricks did he do that you probably assumed was a stunt man? Here are 10 dangerous stunts that Cruise did himself.

1. Hanging off the side of a plane in Mission: Impossible – Rogue Nation

In this Mission Impossible installment, Tom Cruise returns to his role as Ethan Hunt and has to take down an organization called the Syndicate. The movie starts off with a bang with a scene of Cruise running and jumping onto a plane about to lift off. He ends up having to hang on the outside of the plane until his partner can open the door.

This stunt actually started out as a joke, but became real when the daredevil actor agreed to it. The director, Christopher McQuarrie said in an interview, “I suggested to Tom, ‘What if you were on the outside of this thing when it took off?’ I meant it as sort of a half joke, but he said back to me, ‘Yeah I could do that!’”

This action-packed film also required Cruise’s character to hold his breath for three minutes in order to hack into an underwater safe. However, things don’t go as smoothly as planned, and he ends up being underwater closer to six minutes!

The actor was adamant about doing it himself. Although there was a stunt crew available in case the actor needed help, Cruise was able to do it on his own, according to the stunt coordinator on set. 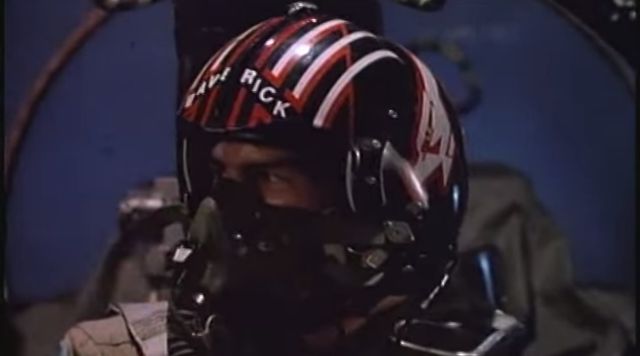 If you’re a big-time actor who wants to play with big toys, then you make sure to put it in your contract. When Tom Cruise took on the role of playing a student in a Navy pilot program, he made sure to have it in his contract that he would be able to fly the F-14 three times.

Cruise was later asked in an interview if there would be a sequel to the movie and said there weren’t any plans for it yet. But if it does happen, he will make sure he flies a jet again, instead of relying on CGI.

In the film, Ethan Hunt has to clear IMF’s name when it is blamed for the bombing of the Kremlin. Part of that involves scaling a skyscraper in Dubai called Burj Khalifa that just happens to be the tallest building in the world.

The actor did the stunt himself with the help of a harness to hold him at 1,700 feet off the ground, according to The Daily Mail.

In Jack Reacher, the action star plays a homicidal investigator who is tracking down a military sniper who has killed five people. While on the case, his character gets into a car chase in a red Chevelle. He tries to run another car off the road and dodge traffic.

According to Top Gear, the actor did it all himself instead of passing it off to someone else.

In this film, Tom Cruise plays a contract killer who is holding a cab driver (Jamie Foxx) hostage to drive him around Los Angeles. One of the scenes involves his character gunning two people down in an alley when they try to take his briefcase.

There is video of the actor being trained for the scene, along with many others, by visiting places like a gun range in order to shoot like a professional.

7. The sword fight scene in The Last Samurai

For this movie, in which Cruise plays a military adviser who learns how to be a samurai after being captured, the actor insisted on doing his stunts himself. However, he almost died doing so!

According to Daily Mail, he was filming a scene with Hiroyuki Sanada and the two were supposed to come at each other on mechanical horses. Cruise’s horse was supposed to stop short to prevent him getting hit with Hiroyuki’s sword. However, it kept going.

Thanks to Hiroyuki’s quick reflexes, Cruise was fine.

8. The motorcycle chase in Knight and Day

Once again, the star plays a spy who takes a young woman (Cameron Diaz) along with him as he tries to avoid being killed by his own organization. There is a scene where the two are being chased while on a motorcycle.

Cruise actually came up with the idea of having Diaz flip around on the motorcycle to face their chasers to shoot at them. He asked Diaz if she wanted to do it and she did, according to Access Hollywood.

Tom Cruise plays a military officer who is stuck replaying a day where he goes to war against aliens with a Special Forces warrior (Emma Blunt) in Edge of Tomorrow. Once again, Cruise did a car chase that put his life in danger.

Blunt said on Conan that while driving the stunt car, Cruise was in the passenger seat and she accidentally wrecked it by hitting a tree. The two also did a lot of their other stunts, dodging flamethrowers and more.

In the first mission we share with Ethan Hunt, he is trying to find the spy who is taking down their organization. The mission requires him to break into the CIA with a harness as the only thing to save him from falling to his death.

The actor did it mostly himself and had to stay in one position to complete it.