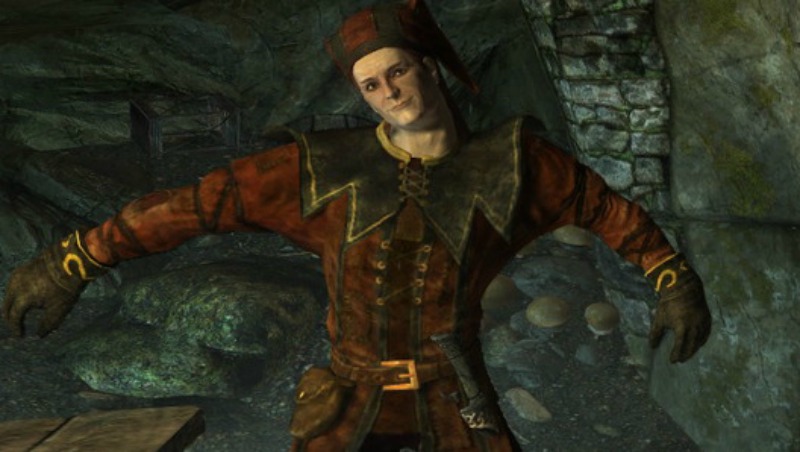 Some of the most memorable and cherished characters in games are ones who’ve gone completely bonkers. From irrational fears to illogical explanations, these crazies provide demented charm, intentionally or not, that proves hilarious and endearing despite their instability.

Possible minor spoilers ahead, and be warned: Colorful language is used.

A roaming citizen of Novac, No-bark Noonan is a wonderfully colorful scholar of delusion whose conspiracy theories vary from invisible blunderbuss-wielding chupacabras to treasure-hiding geckos. Impressively, despite his intellectual inequities, No-bark still holds a firm fear of Lenin and communism, nearly 300 years later in the Fallout universe.

Goofy quote: “Ghosts. Commie ghosts what don’t know they’re dead. Hoping to steal our rockets so they fly up and paint the moon pink and draw a Lenin face on it.”

A dedicated disciple of the Dark Brotherhood, Cicero once was a sane assassin but eventually descended into madness after dispatching a jester. Clearly he began to take on the persona, even dawning a full jester outfit. Cicero is a possible companion for the Dragonborn protagonist, so you can take his delightful insanity on the road with you, where he’ll dance along the way and profess his love for killing and sweet rolls.

A self-proclaimed misanthrope more fond of the dead than the living, Seth Briars is a grotesquely famished, unbathed, and wretched human being who spends a lot of his time grave-robbing. Seth is surprisingly upbeat and aware of his state of depravity, so it makes the experience of working with him a little more tolerable for John Marston, but not by much. You can find Seth in the Undead Nightmare DLC having a hoedown with a few zombies, one of which he’s managed to teach how to play the violin, somewhat.

Goofy quote: “Well, look at me! Look! Scramblin’ around, lookin’ for maps, half insane! I haven’t washed in six months. My hair’s fallin’ out and my mind’s goin’!”

Lily Bowen is a big blue super mutant, superior to most of the mutants inhabiting the Fallout wasteland. She once was an old grandma, but after being forcibly removed from her vault she was dipped in the vats of the “Forced Evolutionary Virus” and transformed into the formidable nightkin she is now. While these special nightkin super mutants are superior in intellect and combat skill, there’s a little side effect of schizophrenia that plagues these warriors from overusing Stealth Boys, a device for invisibility.

Not quite having the facility to recognize her own transformation, Lily spends her time popping pills, arguing with her alter ego Leo, and mistaking the protagonist as her grandson, Jimmy. Like Fawkes from Fallout 3, Lily will often provide comedic surprises when least expected.

Goofy quote: “What’s the matter, dearie? Afraid grandma will embarrass you in front of your little friends?”

Originally debuting in the Call of Duty: World at War zombie mode, Dr. Richtofen is an incredibly energetic psychopath whose Nazi-fueled tirades explode from his mouth, with perhaps a few tears of exasperated joy following behind.

Likely modeled after the real-world “Angel of Death,” Dr. Joseph Mengele, Richtofen serves as comedic satire against the sadistic operations and experiments Nazis were so fond of. His maniacal and cartoonish laugh surely haunts both his human and undead victims.

Goofy quote: (Character taps on mic.) “Attention shoppers … We have a special on DEATH!”

Sheogorath’s insanity should go without saying since his official title as a Daedric god is the Daedric Prince of Madness. Sheogorath inhabits his realm in the Shivering Isles where he oversees the two divided communites: Mania and Dementia. One is the home of fantastic artists and revelers, while the other is filled with the evil and ominous, respectively.

Sheogorath’s demeanor is often cheerful and welcoming, where he’ll charm you with his nonsensical musings, threats, warnings, and tangents. Of all of his eccentricities, his love of cheese seems to be the strangest meager obsession for a god.

Goofy quote: “You know, you remind me of myself at a young age. All I cared about was riding narwhales and sleeping in honeycombs and drinking babies’ tears … Word of advice if you ride a narwhale. Mind the pointy end.”

Living in Bioshock‘s underwater city Rapture, Sander Cohen is a deranged artist with a penchant for taxidermy. His presence is so grandiose and vain that while not purposely funny, you can’t help but chuckle at how ridiculous his version of reality is. Humorous moments typically emerge when Cohen’s sophisticated artistic facade crumbles under his capacity for vulgar rage.

That’s not to say, however, that he’s not a creepy citizen of Rapture, because he certainly is. Cohen can be heard in the video above reciting his poem “The Wild Bunny.”

Goofy quote: “Hurry now, my muse is a fickle bitch with a very short attention span!”

Spiritual successor to No-Bark, the Mad Hermit shares a similar affinity for conspiracy theories, concluding that the trees are out to get him. Obsessing over a tree’s acorn and playing games via questions and answers, this nutty mage is driven by curiosity and intrigue. It’s too bad his role is so small in the game, as characters with this level of silliness help add humor to games, like Dragon Age, that are mostly serious epic affairs.

Goofy quote: “Aaaah, suddenly it all becomes clear. You here, that talking tree there, it all makes sense now. As a matter of fact, yes, I do have that tree’s acorn, I stole it and it was easy, silly tree should have locked it up tighter!”

Considering that the Portal games have a mostly relaxed pace due to their puzzle-solving nature, the inclusion of the unbalanced A.I. GlaDOS helps inject humor and antagonism at every turn. Just about every line of dialogue GlaDOS has is instantly quotable. GlaDOS relishes in insults and contempt for the player, punishing you with verbal attacks while you try to escape the endless depths of the Aperture Science facility that she oversees.

Goofy quote: “Tell you what, let’s give your parents a call right now.” (Phone rings.) “The birth parents you are trying to reach do not love you. Please hang up.” (Dead dial tone.)

Face McShooty’s corresponding mission, “Shoot This Guy in the Face,” needs little explaining — in fact, none. The video speaks for itself.

The character was apparently inspired by The Onion’s FPS spoof game “Close Range.”

Goofy quote: “At the sound of the bell it will be face-shooting o’ clock!”