It isn’t a simple task to recommend films or TV series to Star Wars fans for the simple reason that there truly isn’t anything like George Lucas’ epic space saga, now in the hands of JJ Abrams and Disney. But you can start by first looking at what influenced Lucas to make Star Wars and then trying to boil down what makes Star Wars tick.

From a sub-genre perspective, sci-fi is generally split into two groups: hard sci-fi and soft sci-fi. Hard sci-fi generally deals with stories characterized by an emphasis on science with technical accuracy, pushing action or special effects to the background. Fans of hard sci-fi would generally include 2001: A Space Odyssey at the top of their list along with newer entries like Europa Report. Soft sci-fi, on the other hand, favors soft sciences (sociology, psychology, etc) and is more concerned with character and futuristic society at large from a speculative viewpoint.

Star Wars, then, would fall toward this latter category, although it should be noted that many believe that the series exists in an entirely separate category: sci-fi fantasy. Regardless of the genre debate, you can start to get a sense of what might appeal to a Star Wars fan by starting with the sub-genre of soft-sci and trying to find titles that capture the adventure and fun of Star Wars. With that being said, here are ten films and TV series that would appeal fans of Star Wars. 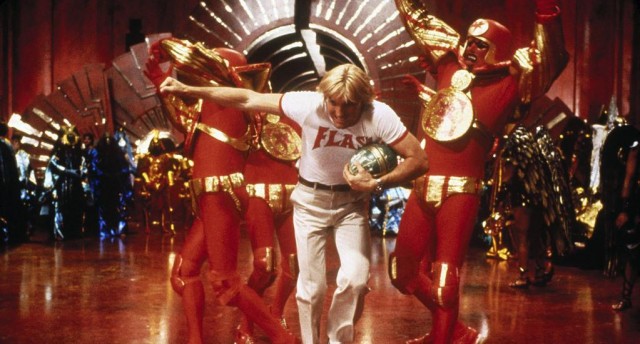 The fact that Flash Gordon was one of George Lucas’ primary Star Wars influences should tell you that this comic strip-based film is worth your time if you’re a Star Wars fan. Additionally, Lucas attempted to obtain the rights to make a Flash Gordon film before he ever made Star Wars, and when he was denied, many of the ideas made their way into Star Wars: A New Hope.

Flash Gordon has been widely adapted over the years to include three film serials, a series of television shows both live action and animated, and a video game. But the loopiest of the bunch — and the most entertaining — was the 1980 film adaptation directed by Mike Hodges starring Sam J. Jones, Melody Anderson, and Max von Sydow (who also plays a character in The Force Awakens). With an intentionally campy style used to emulate the comics and serials, Flash Gordon tells the story of the titular hero, an American football player, who is scooped up by a rocketship and sent to planet Mongo where he and his friends battle Ming the Merciless over the fate of Earth.

While the film performed poorly at the time of release, it has since achieved cult classic status with filmmakers like Edgar Wright claiming it as a favorite. If you need another reason to check it out, the film’s soundtrack was composed and performed by none other than Queen.

Released in the summer of 1997, Luc Besson’s The Fifth Element has already achieved classic status in the minds of many sci-fi fans. The film stars Bruce Willis as Korben Dallas — a taxi driver and former special forces major who is inadvertently roped into an enormous struggle that involves the fate of the Earth. Also starring Milla Jovovich, Ian Holm, Chris Tucker, and one of Gary Oldman’s most memorable performances as Jean-Baptiste Emanuel Zorg, the film is filled with manic energy, fantastic production design, and special effects that still hold up to this day.

All other Star Trek films and TV series have been left off this list, but the 2009 Star Trek and its sequel deserve mention because of how much they branched off from the previous iterations of the series and have the potential to win over even the biggest Star Wars fans. Star Trek and Star Trek Into Darkness star Chris Pine, Zachary Quinto, and Karl Urban in a film that acts as a reboot of the original characters, but in an alternate reality. In Star Trek, the members of the USS Enterprise find themselves up against the Romulan villain Nero (Eric Bana) and in the sequel they are sent to the Klingon homeworld to seek out former Starfleet member-turned-terrorist John Harrison (Benedict Cumberbatch.)

In many ways, the two films feel much more like Star Wars than Star Trek (to the ire of many Trek fans), favoring action and emotion over the series’ usual headier subject manner. In fact, director J.J. Abrams, a self-admitted Star Wars fan, has been accused of reinventing Star Trek in order to mold it to the style of Star Wars. But there’s no doubt that for viewers who have never been invested in the Star Trek style, the two new films represents a clean break that feels much more like its rival than ever before. 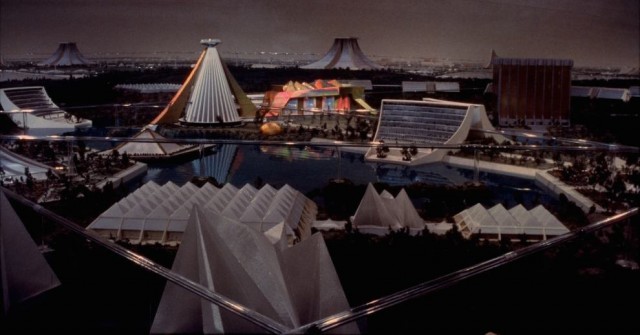 Logan’s Run hit theaters in the summer of 1976, less than a year before Star Wars would be released. Directed by Michael Anderson and starring Michael York and Richard Jordan, Logan’s Run is a good example of the state of soft sci-fi before Lucas’ original Star Wars hit theaters. Based on the novel of the same name by William F. Nolan and George Clayton Johnson, Logan’s Run tells the story of a dystopian future society where population control is administered by killing everyone who reaches the age of thirty. But even if the film feels outdated, it’s worth giving it a shot because of its impressive visuals and action, along with a dystopian story that shies away from dreariness.

Firefly is a space western created by Joss Whedon (The Avengers) that premiered in 2002, running only one season before it was cancelled by Fox. Starring Nathan Fillion, Gina Torres, and Alan Tudyk, Firefly revolves around a group of people who fought on the losing side of a civil war and are now banished to the outskirts of society. The series has been lauded for its balance of action and humor while also focusing on serious character studies — the latter of which was never very evident from Fox’s marketing of the show.

Although the series was cancelled before the first season had even concluded, Firefly’s avid following sparked a follow-up feature film, Serenity. Although Whedon has never ruled out a return to the series, it appears a new film or TV series isn’t likely any time soon. 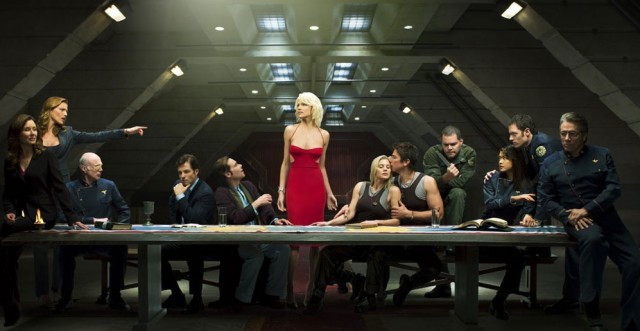 Battlestar Galactica is a reimagining of the 1978 sci-fi series of the same name that ran for one season in 1978. One of the most critically acclaimed sci-fi series of all time, Battlestar Galactica is set in a distant star system where human civilization lives on a group of planets called the Twelve Colonies. After warring with a cybernetic race of their own creation named the Cylons, the remaining humans, which number approximately 50,000, find themselves on a mission to find Earth.

The series would later spawn the prequel series Caprica as well as a spin-off webseries named Battlestar Galactica: Blood and Chrome that later appeared on SyFy as a TV movie. Diane Werts of Newsday said it best in 2005 when she named the series the best show of 2005, writing that, “You can look at this saga any way you want — as political drama, religious debate, psychological suspenser, sci-fi adventure, deep metaphor or just plain fun — and it’s scintillating from every angle.”

Originally conceived by Roland Emmerich and Dean Devlin as the 1994 sci-fi adventure film Stargate, the film has since blossomed into a one of the most popular sci-fi franchises of all time. While it doesn’t hurt to begin with the 1994 film, the consensus is that Stargate SG-1, which began three years after the film had premiered, is the best the franchise has to offer.

Stargate SG-1 takes place one year after the events of the feature film and revolves around the the elite United States Air Force special operations team SG-1 who are tasked with exploring the galaxy via the Stargate and defending Earth from alien threats. In a series that ran for ten seasons and includes 214 episodes, it’s safe to say that Stargate SG-1 rapidly expands to include a multitude of storylines and has gained a strong cult following over the years. If you find yourself a fan of the show and looking for more, there’s also Stargate Atlantis, Stargate Universe, two direct-to-DVD films entitled  Stargate: The Ark of Truth and Stargate: Continuum, and the animated series Stargate Infinity. 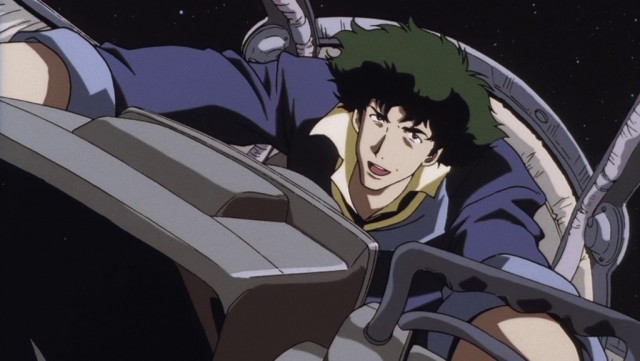 The sci-fi action genre is a staple of Japanese animation and you could easily do an entire list of strong entries that fit the bill. However, Cowboy Bebop is not only the best of the bunch, often named among the greatest anime series of all time, but it is also the kind of transcendent series that is worth a look even for those who think they don’t like Japanese animation.

Set in the year 2071, Cowboy Bebop takes place in a world where the Earth has become uninhabitable and the development of Phase Difference Space Gates — gates that allow for swift space travel across the solar system — has lead to colonization to distant planets and moons. But really, the story revolves around bounty hunters Spike Spiegel and his partner Jet Black who travel around the solar system hunting down criminals and engaging in gun fights, fist fights, and space fighting. The 26-episode series includes both standalone and episodic chapters, with the latter often focusing on Spike’s past as a hitman for the criminal Red Dragon Syndicate and how it continues to haunt the present. If you like the series, you can check out the feature Cowboy Bebop: The Movie that was released a year after the series concluded.