10 Must-Have Action Movies to Add to Your Collection 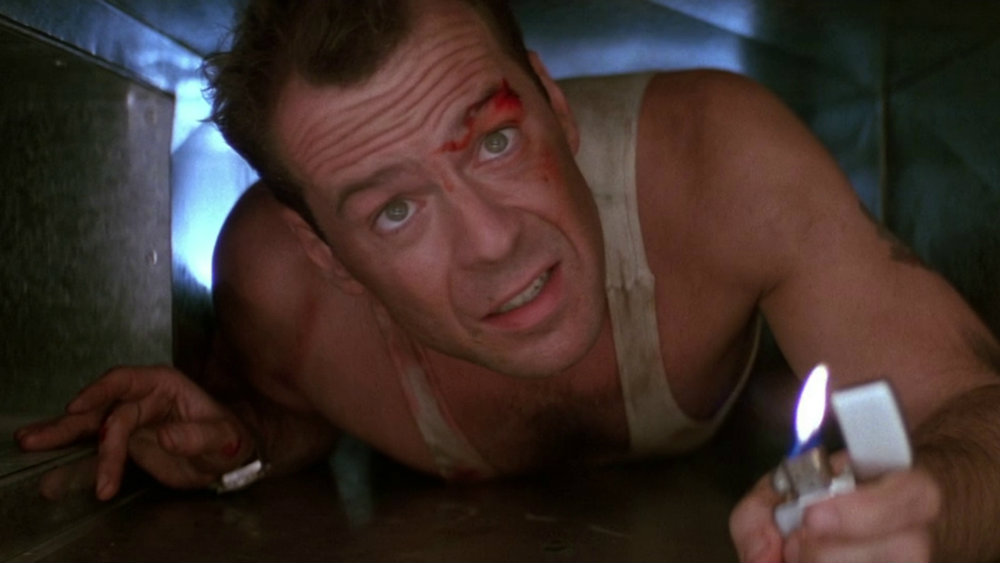 If you ask two people to name the 10 best action movies of all time, chances are you will end up with two very different lists. The action genre is so large and overlaps so many other genres – like martial arts, sci-fi, and fantasy – that it’s difficult to nail down exactly what constitutes an action flick, much less find two people who agree on what the best ones are. That being said, we still feel that there are a few essential titles that every action movie fan should have on their shelf, whether or not they rank in their personal top ten. So, if you truly love action movies, then you had better make sure your collection includes the following classics.

Die Hard is the movie that launched Bruce Willis’s career as a major movie action star and spawned four sequels (at the time of this writing). And while the sequels are of varying quality (looking in your direction, A Good Day to Die Hard) the original is pure action gold. If you haven’t seen it, then you need to order this movie pronto because you have somehow missed seeing the Citizen Kane of action movies. If you have already seen it, then you need no explanation of why every action fan needs to own this classic, or what comes after, “Yippee-ki-yay…”  You can find Die Hard in stunning Blu-ray format here.

Sometimes a sequel can outshine the original. While we highly recommend seeing The Terminator, this action franchise may have reached its peak with Terminator 2: Judgment Day. With a musclebound Linda Hamilton and Arnold Schwarzenegger reprising their roles and a new killer android that can assume any shape, T2 is one of those rare sequels that manage to be just as good, if not better, than the original. And thanks to the unexpected success of the original film in 1984, director James Cameron was able to pack in even better (and more expensive) visual effects in the sequel.  You can find Terminator 2: Judgement Day in Blu-ray format here.

Starring the incomparable Bruce Lee, this classic action movie secured his status both as a movie star and as a martial arts legend. Thanks to its relatively high production values and fighting sequences featuring some of the best martial artists of the time, Enter the Dragon is still well regarded today, despite being made over 40 years ago. That being said, there’s also plenty to love about the awesome ‘70s clothes and hairstyles seen in this martial arts action masterpiece. Besides offering a higher quality picture, the fortieth anniversary Blu-ray edition also includes cool extras like interviews, making-of featurettes, and even footage of Bruce Lee training at home. A must-have movie for any true action fan. You can find the Enter the Dragon (40th Anniversary Edition) Blu-ray here.

4. Raiders of the Lost Ark

Often cited as one of the best action movies of all time, Raiders of the Lost Ark stars Harrison Ford as the intrepid archaeologist adventurer Indiana Jones. Filled with non-stop action and awesome practical effects, this is the type of movie that only gets better with each viewing. And now you can relive the adventure in high-definition with Indiana Jones & Raiders of the Lost Ark [Blu-ray].

Martial arts mayhem at its finest, The Raid: Redemption deserves a place on every action fanatic’s shelf. Featuring some of the most brutal hand-to-hand fighting scenes ever committed to film, this Indonesian action movie became an instant classic when it was released in 2011. In the film, a SWAT team trying to arrest a crime lord is ambushed in an apartment building full of criminals. The police officers who survived the first attack are forced to fight their way video game-style through each floor of the building in order to complete their mission. The battles that occur on the way must really be seen to be believed. You can find The Raid: Redemption in beautiful high definition Blu-ray here.

Essentially a two hour-long demolition derby, Speed is an action movie stripped down to its most basic elements. In the film, a mad bomber (Dennis Hopper) booby-traps a city bus with a device that will explode if it goes slower than 50 mph. Enter L.A.  Bomb Squad member Jack Traven (Keanu Reeves), who teams up with civilian Annie Porter (Sandra Bullock) to prevent the bus from slowing down. Ridiculous on its face, Speed actually turned out to be a well-paced action flick that became the surprise box office hit in 1994. You can find Speed on Blu-ray here.

Fans of over-the-top post-apocalyptic action movies were recently reintroduced to the genius of director George Miller through this year’s Mad Max: Fury Road. Which means it’s the perfect time to revisit Mad Max, the original cult action movie starring Mel Gibson that kicked off the franchise. Made on a shoestring budget and featuring some of the most insane car stunts in the history of film, Mad Max remains a must-see movie for fans of action despite being over 30 years old. You can find Mad Max in Blu-ray format here.

It’s hard to underestimate the influence that the Wachowskis’ groundbreaking movie The Matrix has had on the action genre. Besides bringing martial arts movie style choreography into the mainstream, The Matrix helped popularize many visual effects (remember the “bullet-dodging” scene?) that are still seen in many movies made today. You can find The Matrix on Blu-ray format here.

While The Matrix is famous for its highly-stylized fighting sequences, The Bourne Identity has been hailed for its grittily realistic scenes of hand-to-hand combat. Starring Matt Damon as Jason Bourne — an amnesiac government agent with lethal skills — The Bourne Identity kicked off the highly successful Bourne franchise. The Bourne Identity is a spy thriller that has everything you want to see in an action movie: Car chases, martial arts, gunfights, and an intriguing story. You can find The Bourne Identity here.

Technically, our final must-own action movie is two separate films: Kill Bill: Volume 1 and Kill Bill: Volume 2. However, since the storylines of these two movies are so inextricably connected, and both movies can be purchased together, we are counting them as one single awesome action flick. Starring Uma Thurman as a revenge-seeking woman who was left for dead on her wedding day, Kill Bill is full of the type of bloody fight scenes that Tarantino movies are famous for. Kill Bill is more than a mindless action flick though; it also has a compelling story that manages to keep you on the edge of your seat for over four hours. A must-have double feature for any serious fans of action cinema. You can find the Kill Bill: Volume 1 & Volume 2 Blu-ray collection here.