The Greatest Body Horror Movies of All Time

Horror is perhaps the most primal of all film genres, keying into some widespread fear that lurks in our collective subconscious. Whether we’re talking about the boogeyman named Michael Myers in Halloween or the demonic influences of The Exorcist, the most successful horror films effectively exploit the concepts that most terrify us.

Unlike slasher and possession films, the subgenre of body horror looks inward rather than outward in order to terrify. These films disturb and scare for their graphic depictions of bodily decay and invasion, as characters and audiences witness characters’ ghastly transformations from human to other. Even within this primal genre, few things seem quite so primal and disturbing as this horror of the body.

Here are 10 of the most delightfully disturbing body horror films of all-time.

Jonathan Tucker and Jena Malone in The Ruins | DreamWorks

The Ruins begins like countless other horror films. A typical trope of spring-breaking teens follow a newfound German friend onto an abandoned ruin site. Soon, they’re trapped atop the ruins by superstitious and well-armed locals. The locals are actually doing what’s best, as the area is populated by maliciously cursed plants that infiltrate and destroy human bodies through open wounds. The sorta-silly concept is used to grueling effect, as all hope for a happy ending disappears early on, replaced instead by scenes of amateur surgery and vines that will, quite literally, make your skin crawl. 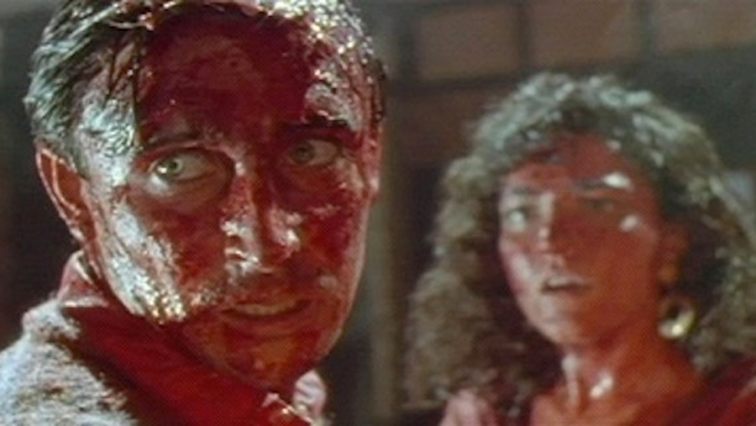 After the hopelessness of The Ruins, it might be nice to delight in the brutal silliness of the New Zealand horror-comedy Dead Alive. Long before helming two Lord of the Rings trilogies, Peter Jackson directed this low budget romp about a hapless New Zealander whose mother turns into a hungry undead monster after being bitten by a Sumatran rat-monkey. This is Jackson’s gleeful exploration of how far he can push the limits of bad taste using a bonkers script and stylish stop-motion effects. The film wherein two undead corpses have sex and give birth to an undead baby. What more can you say about something like that? 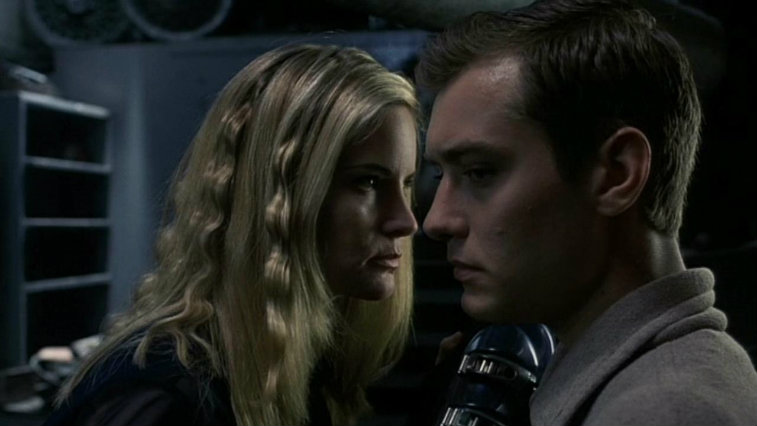 The first film on this list but certainly not the last from Canadian body horror maestro David Cronenberg, eXistenZ melds heady science fiction with flashes of humor and oddly sexualized imagery in a reality-shattering future. A diverse cast of recognizable characters populates the insane world, wherein video game enthusiasts enter layered alternate realities for their own entertainment. It’s a clever questioning of reality, wherein Cronenberg’s genius for stomach-churning VFX shines through in the disturbing video game meals, the fleshy, throbbing controllers, and the skin ports through which they’re connected to the players. 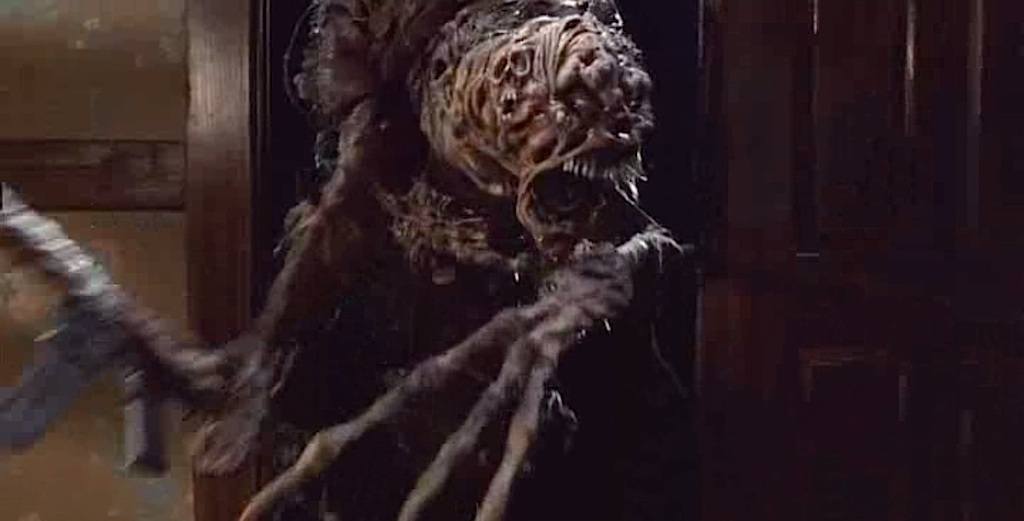 It’s something of a miracle this dark head-scratcher of a horror film ever spawned a successful franchise. The story follows an unfaithful wife who discovers her former lover in her attic, now a literal shell of his former self after escaping an underworld ruled by the sadomasochistic Cenobites, who delight in tearing flesh limb from limb with rusty hooks. The former lover, Frank (Sean Chapman), is equally monstrous, consuming blood to restore himself to something more recognizably human after originally entering the Cenobite’s world in search of “new carnal pleasures.” The strange sexuality doesn’t end there, and the film’s disturbing implications haven’t been dulled in the nearly 30 years since its release. 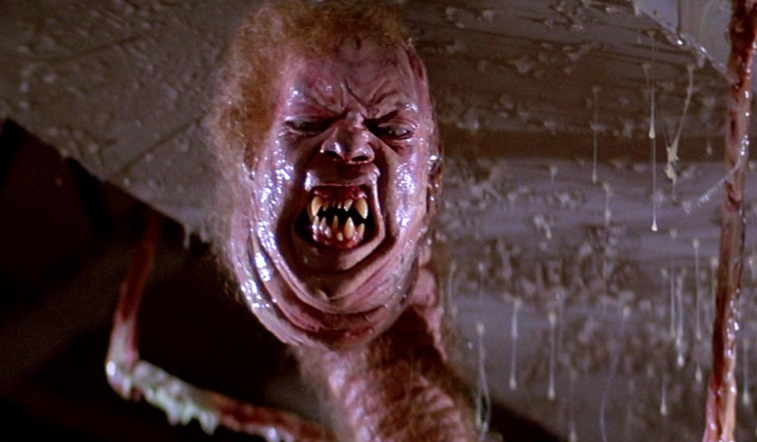 John Carpenter’s sci-fi horror classic follows a group of men on an Antarctic outpost besieged by a shapeshifting alien, and uses strong writing and unrelenting paranoia to create nearly two hours of expertly-crafted tension. The Thing is unquestionably our favorite film on this list, though it doesn’t rank higher since it doesn’t fall so neatly into the body horror category as these other films. Still, when one of the film’s best scares comes from a man’s chest opening to reveal a set of teeth and chomp off another man’s arms, it’s got to count for something. 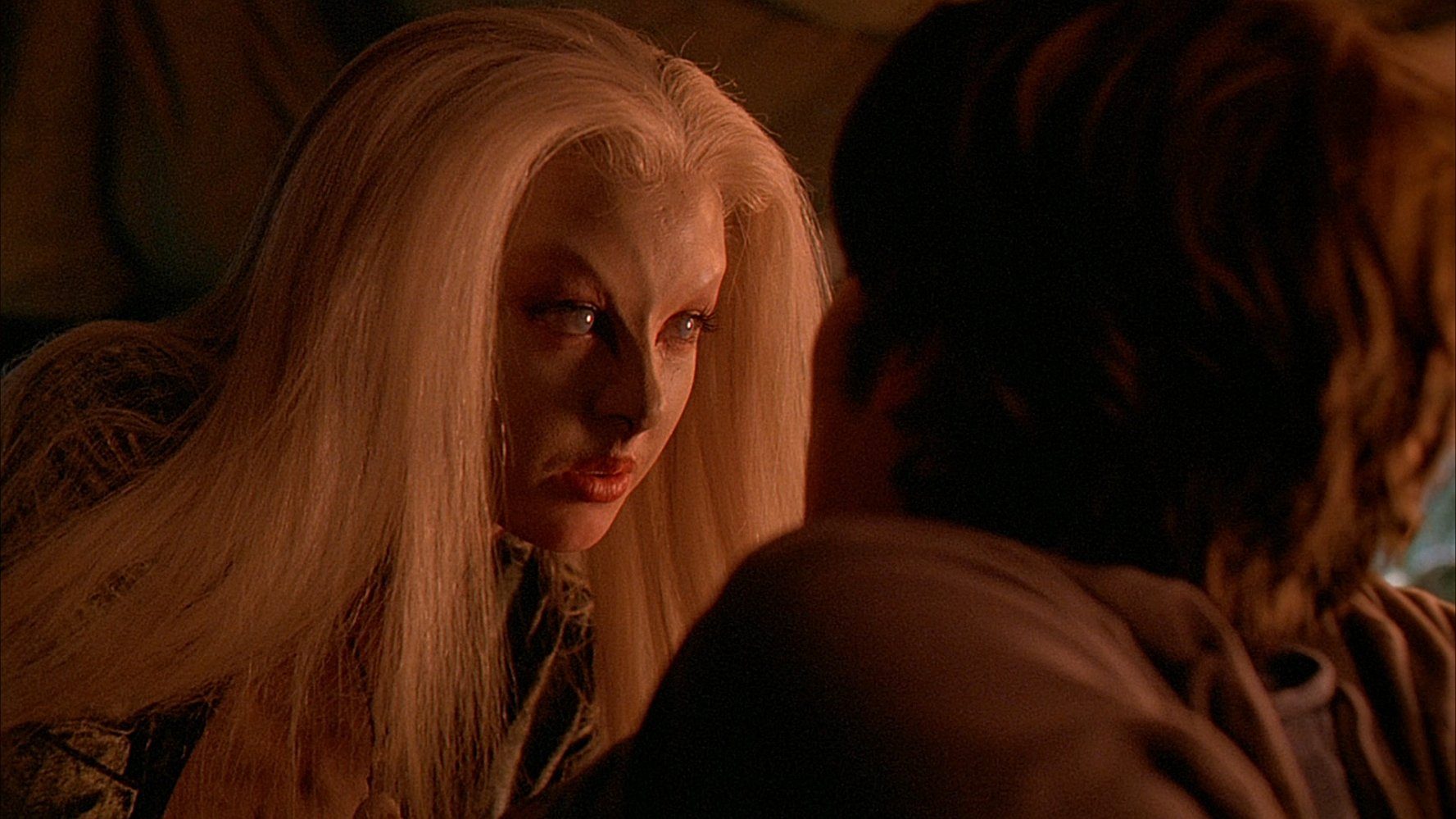 One of the most refreshing updates of werewolf lore, the Canadian independent gem Ginger Snaps deserves a place among the body horror greats. Though werewolves have always had adolescent implications, Ginger Snaps pushes the connection to its extreme, having the titular Ginger get bitten on the same night she has her first period. The film uses horrific practical effects and cheeky humor to explore the consequences when her sexual maturation turns to unquenchable bloodlust. Somehow, the character work is as well-done as the unnerving, graphically-depicted transformation sequences. 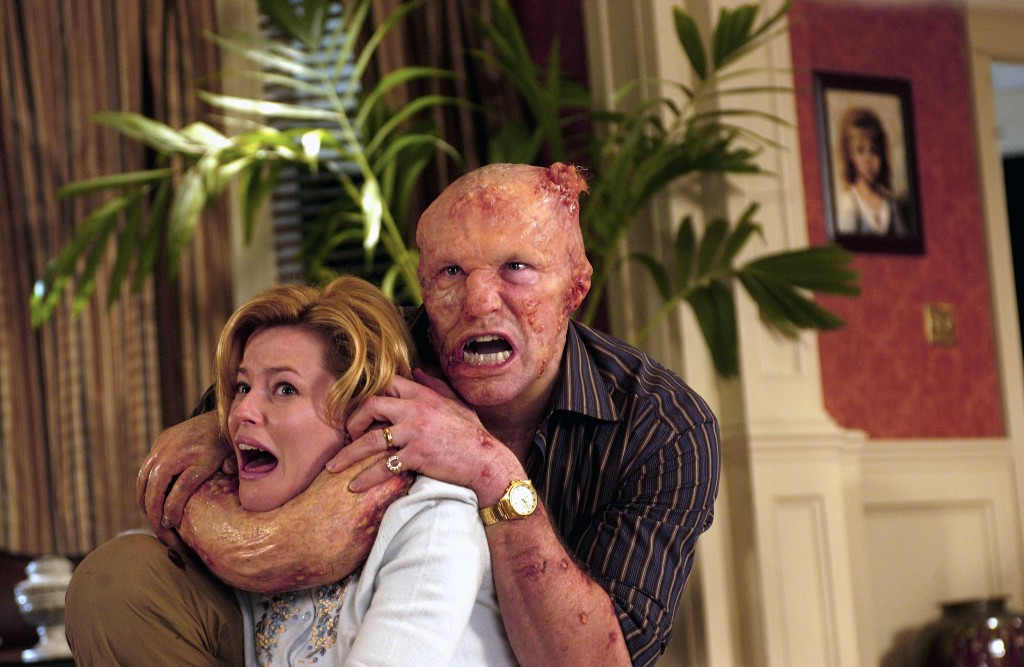 Director James Gunn only recently gained fame for his cheeky Marvel space-epic Guardians of the Galaxy, but he’s been churning out clever, though far less-marketable, products since Slither, made in 2006. The horror comedy focuses on a middle-of-nowhere small town invaded by an alien species that conquers planets using multiple life cycles. There’s a lot going on here, including slithering slug monsters, people transformed into incubating, insatiable flesh-eaters and a lonely middle-aged man who becomes the mastermind of the whole convoluted plot to join every living being on earth into a giant blob-like alien monster. The script is as creatively disgusting as it is humorous.

Other films on this list may be scarier than David Cronenberg’s remake of The Fly, but none are more heartbreaking. The film stars Jeff Goldblum as a doomed, nerdy but proud scientist who tests his new teleportation technology on himself, and in doing so, inadvertently splices his own DNA with a house fly’s. So begins a painful and painstakingly rendered transformation that lasts the whole film. The true heart of the picture though is Goldblum’s doomed relationship with Geena Davis, who has no choice but to watch along with the audience as Goldblum succumbs to his horrific fate with the help of amazing practical effects. 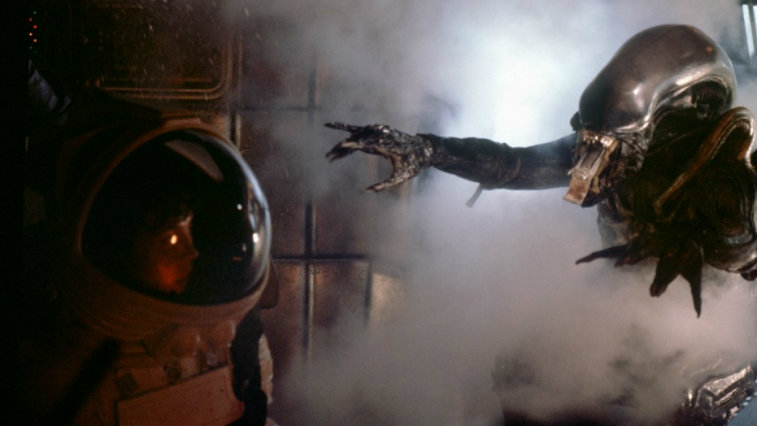 It’s no coincidence that every incarnation of the alien in Alien has some kind of phallic imagery within it. This invasive creature is one of the greatest creations in body horror history, a parasite that cannot be stopped and whose every aspect is singularly terrifying, from its chest-bursting growth to its acidic blood. The film also features a shocking robot-beheading sequence and a climax that pits Sigourney Weaver at her most vulnerable against this ultimate killing machine. The stylish effects and the lonely spaceship settings cement the film as one of the best body horror films of all time. 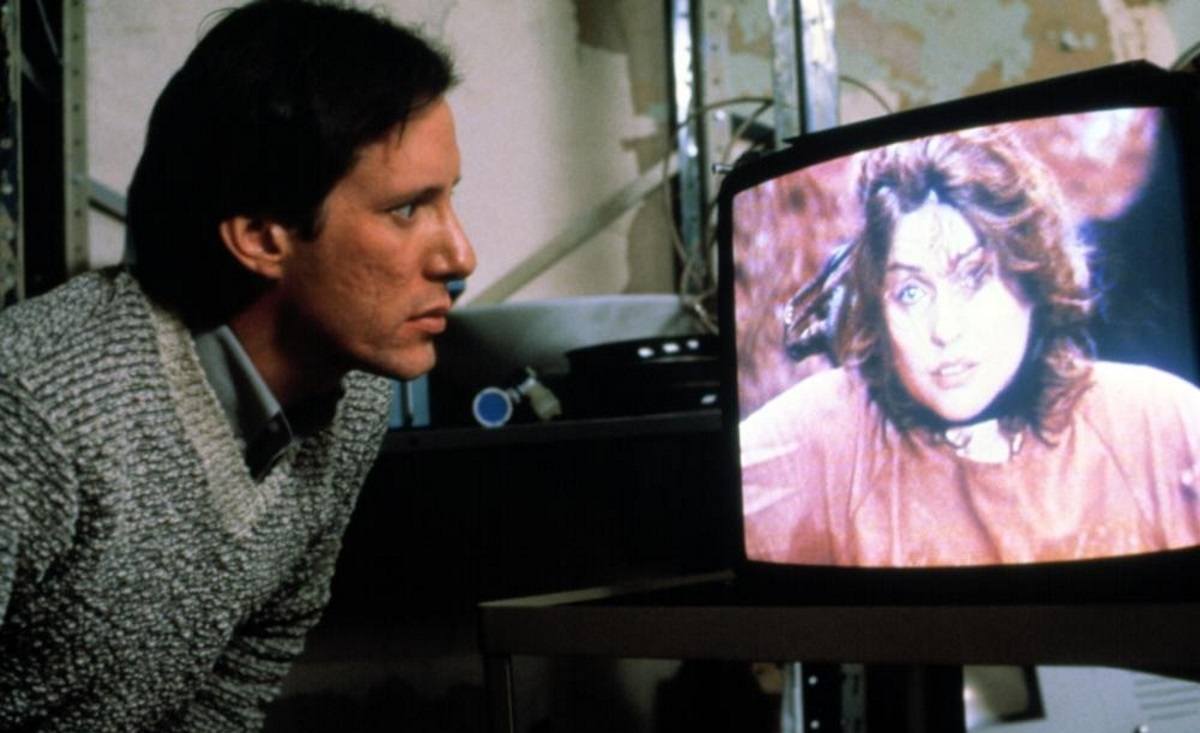 The final David Cronenberg film on my list finds him directing a sleazy TV producer played by James Woods who discovers a little-seen snuff-porn channel that alters the brain chemistry of anyone exposed to it. The film becomes gradually more insane and difficult to follow as it goes on, using sexualized effects to blend flesh and technology into one as Woods struggles to understand the frequency called videodrome while succumbing to its hallucinatory effects. His head is consumed by a pulsating television. A gun becomes attached to his hand via newly molded flesh. We can’t imagine a body horror film that could ever match Videodrome in its puzzling, fascinating, unsettling creativity.