Every year is backloaded with major game releases as publishers hope for big sales during the holiday shopping season. The deluge of big games is officially beginning, and it’s not going to let up for quite some time. That’s great news for anyone who likes playing video games, but it’s also overwhelming. Who has the time and money to play them all?

That doesn’t seem to be a problem that’s hurting the industry, so whether you like choose-your-own-adventure horror games, remastered classics, visual novels, football, or just about any other kind of game, you’ll find something to play. Read on for all the biggest games launching the week of August 24, 2015.

If you like horror movies, then you’ll definitely want to keep an eye on Until Dawn, a game that puts you in the shoes of eight potential murder victims. Like many scary flicks, the game follows a group of teenagers who decide to spend the night in a cabin in the woods, a locale that just happens to be in the path of a serial killer.

You get to play as each of the kids in turn, making decisions about where they hide and how they react when the killer comes a-hunting. Your choices determine who lives and who dies, so if you’re always yelling at horror movie characters for making dumb decisions, you’ll be pleased that you get to craft the narrative here. Add in performances by Hollywood stars like Hayden Panettiere, and you’ve got the makings of a potentially terrific horror game.

Releases August 25 for Xbox One

The original Gears of War came out back in 2006 for Xbox 360, and it kicked off one of the best shooter franchises around. Since Gears of War 4 won’t be hitting the shelves until the end of 2016, Microsoft thought now would be a good time to polish up the first installment for Xbox One.

The question is whether the game is good enough to stand out in 2015. Judging by the multiplayer beta Microsoft did a couple months ago, it does. The game looks fantastic and plays great. Now if only they’d remaster the rest of the series…

One of the most prolific and longest-running series in the history of video games, Madden NFL has come out in yearly installments since 1990. The games have come a long way since then, culminating in the most realistic digital version of the sport imaginable.

As usual, this year’s installment includes a few tweaks that may or may not stick in future editions, based on how successful they are here. Developer Electronic Arts is touting more advanced passing options, new receiver controls you can use while the ball is in the air, and new “broadcast graphics” that make the game look even more like a televised game. 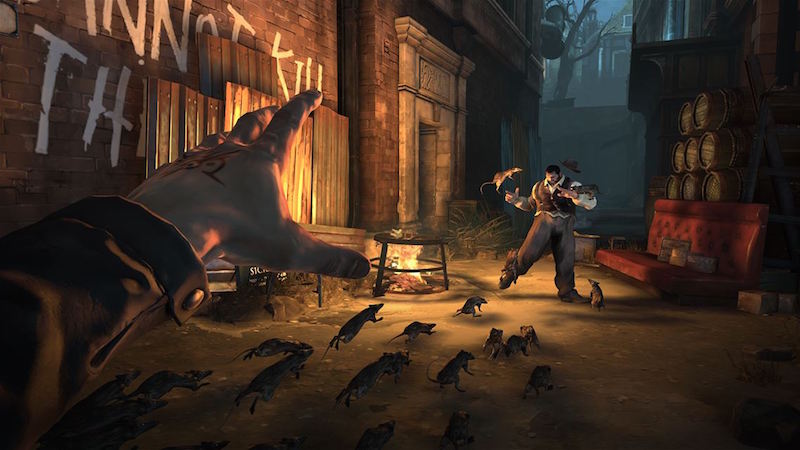 Releases August 25 for Xbox One and PS4

Dishonored is one of my favorite games from the last console generation, so it’s good to see it come to the new crop of systems with all of its DLC included. What is Dishonored? It’s a first-person action stealth game that, depending on the mission, has you sneak into enemy compounds, rescue hostages, assassinate villains, or pretend to be an invited guest at a fancy costume party.

To help make your entrances extra stealthy, you have an array of supernatural abilities that let you do things like teleport short distances, possess enemies, control swarms of rats, and more. It’s a ton of fun, with numerous ways to complete each mission. You can even beat the game without killing anyone if you’re feeling non-violent. If you missed this game the first time around, don’t let it pass you by now.

Releases August 25 for Xbox One, PS4, and PC

The Mega Man games practically defined the action platforming genre on the Nintendo Entertainment System. That console was home to the first six games in the series, which came out between 1987 and 1993 and are collected here.

Also in this collection are a number of extra goodies, like concept art, enemy descriptions, challenges that remix memorable segments of the games, and even screen filters that make it look like you’re playing on a CRT television. Pick this one up if you want to relive an important part of gaming history.

The PS Vita is home to lots of genres that haven’t gotten a foothold in the U.S., and Steins;Gate is one of them. It’s a “visual novel,” which means you spend most of your time in the game reading. The focus is on the narrative rather than on the gameplay, but the narrative is excellent, according to most reports.

The game follows a group of teenage protagonists who discover a machine that can send emails into the past. Since that lets the recipient change the future, they realize this is powerful technology indeed. This discovery inspires them to try to create an actual time machine, which kicks off a series of fascinating and entertaining events. If you don’t mind a lot of reading in your games, this is one to check out.

If one visual novel isn’t enough for you, here’s another releasing the very same day. Amnesia: Memories is a romantic story that centers on a young woman who wakes up on August 1 with no memories at all. She doesn’t know who she is, where she is, or what the heck is going on in her life.

It turns out that romance is going on. With the help of a spirit named Orion, you get to go on dates with five men. The trick is that you can’t let on about your condition, or else you’ll lose the chance to regain your memories altogether. It might not be for everyone, but it sure is unique. Check out the reviews if you’re looking for something different.

A new genre of game is sprouting up in which the primary challenge is fighting the bizarre control schemes. I’m talking about games like QWOP, Octodad, and Surgeon Simulator. A more recent entry in this burgeoning genre is I Am Bread, a much less gory game from the makers of Surgeon Simulator.

You play as a piece of bread (of all things) and you have to move your clumsy self from point A to point B. You control the corners of the bread as you try to maneuver it, say, from a kitchen table into a toaster on the counter.

Not only is the bread hard to control, but you can’t let it touch dirty surfaces for long. The result is equal parts hilarious and frustrating. Check this one out next time you’re hanging out with your buddies.

The full game doesn’t come out until November 6, but if you preorder Call of Duty: Black Ops III on Xbox One or PC, you get a code that lets you participate in a multiplayer beta that takes place August 26-30. This sneak-peek includes three maps and seven modes that you’ll be able to test drive ahead of anyone else.

Beta tests like these rarely go smoothly, so you might want to clear your schedule if you’re going to try to get onto the servers right when they go live. That said, this is your best chance to get an early look at this year’s installment of the blockbuster shooter franchise.

Releases August 26 for Xbox One

This game has been swimming from system to system since its original PC release in 2010, but it’s just now making its way to Xbox One. Like I Am Bread and Surgeon Simulator, the only enemies in this quirky game are the overly complicated controls.

The funniest part of the game is actually the premise. Somehow an octopus has convinced everyone in his life, from his co-workers to his family, that he’s a human. To keep up the ruse, you must help him do things like get from the bedroom to the kitchen, eat breakfast, and get in his car to go to work. It’s not easy, but it’s incredibly silly and highly satisfying once you achieve Octodad’s rather pedestrian goals.