Having multiple singles off one album hit No. 1 is an accomplishment for any artist, but there’s an especially impressive select bunch that have managed to take that feat one step further. These 11 talented musicians didn’t just score two straight No. 1’s on the Billboard Hot 100 chart, they actually replaced themselves in the top slot, swapping one chart-topping single with another.

Presley’s 1956 double-sided single record “Hound Dog/Don’t Be Cruel” became a hit, when “Don’t Be Cruel” passed “Hound Dog” at No. 2 to top the chart. Between the two sides of the record, the tracks remained No. 1 on the pop chart for a total of 11 weeks. Presley followed that up with the hit single, “Love Me Tender,” which went to the top of the Hot 100 in November and remained in that position for five weeks.

The legendary band has managed to pull off this feat twice, in just a matter of weeks in 1964. Their track “I Want To Hold Your Hand” became the group’s first American chart-topper in February of that year, staying in the top spot for seven weeks straight. It was then replaced by the single, “She Loves You,” which surged in popularity following the group’s rise in fame. “She Loves You” spent two weeks at No. 1 in March, making The Beatles only one of two artists in history whose first two Hot 100 singles held the top two positions simultaneously. But the chart domination didn’t stop there. “She Loves You” was eventually replaced by “Can’t Buy Me Love.” Between the three songs, the group stayed at No.1  for a combined total of 14 consecutive weeks.

“I’ll Make Love to You,” the R&B group’s lead single from their second album II, went to No. 1 on the Billboard Hot 100 and remained there for 14 weeks, starting in August 1994. The song set a record for most weeks at No 1. at the time. The track that finally knocked it out of the top spot? Another hit from Boyz II Men, “On Bended Knee,” which topped the charts in December and stayed there for a total of six weeks.

Then known as Puff Daddy, Diddy dominated the Hot 100 chart with “I’ll Be Missing You,” the track he recorded with Faith Evans and R&B Group 112 in memory of Notorious B.I.G. The song became one of the only rap songs by a male to debut at No. 1 in May 1997, and spent a record-breaking 11 weeks in the top ranking. “Mo Money, Mo Problems,” Notorious B.I.G’s single also featuring Diddy was then released posthumously and replaced “I’ll Be Missing You” on the chart in July of that same year, remaining at No. 1 for two weeks.

“Always on Time,” the 2002 single featuring Ashanti, spent two weeks at the top of the Hot 100 chart in February. It was knocked out of the No. 1 spot by another one of his joint tracks, “Ain’t It Funny” with Jennifer Lopez. The latter, a remix of Lopez’s original song off the album J to tha L-O! The Remixes, was coincidentally also co-written by both Ja Rule and Ashanti. The “Murder Remix,” as it was billed, topped the charts beginning in March and maintained the spot for five weeks, until mid-April of that year.

The rapper scored his first ever No. 1 hit with his 2002 track “Hot in Herre,” which stayed at the top of the Hot 100 for seven weeks. The rapper then replaced himself at No. 1 with “Dilemma,” his Grammy Award-winning single with Kelly Rowland. “Dilemma” is the most successful song of Nelly’s career, giving him his first international chart-topper, and also served as a propeller for Rowland’s solo career.

“Hey Ya!,” one of two lead singles off the double album Speakerboxxx/The Love Below, was both a critical and commercial hit, when it was released in 2003. The song, largely considered one of the most successful tunes of the 2000s decade, topped the Hot 100 for nine weeks, from December to February 2004. “The Way You Move,” Outkast’s second lead single off the album, hit No. 1, remaining there for a week and giving the group their third chart-topping pop single.

The singer’s 2004 Grammy-winning single “Yeah!,” featuring Lil Jon and Ludacris, topped the Billboard Hot 100 for 12 consecutive weeks, becoming the longest-running No.1 single of the year. It was replaced by Usher’s follow-up single, “Burn,” which topped various charts around the world, including the Hot 100 for seven consecutive weeks. With the success of both singles, Usher dominated the charts for 19 straight weeks.

“Whatever You Like,” the rapper’s lead single off his 2008 album Paper Trail, gave the artist his second No. 1 on the Hot 100. It topped the charts for seven non-consecutive weeks, making it one of T.I’s biggest pop solo hit. “Live Your Life,” his song with Rihanna, then replaced it, leaping from No. 80 to the top spot in a week and giving the artist his third chart-topping single. The song remains T.I.’s highest charting and most successful single worldwide to date. 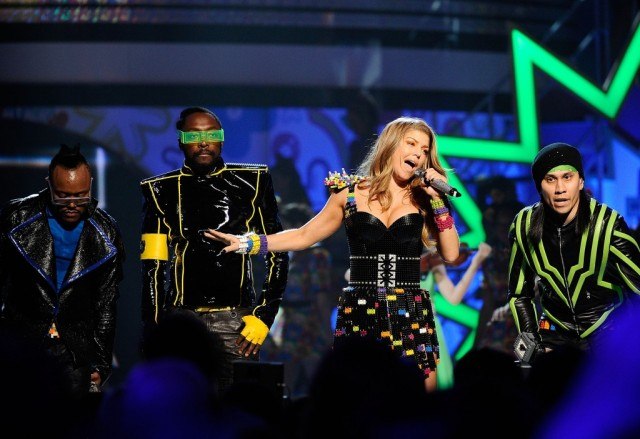 The group earned their first No. 1 single with “Boom Boom Pow,” the lead track from their fifth studio album, The E.N.D. It held the spot for 12 consecutive weeks, making it the second longest-running single to stay atop the Hot 100 in 2009, beaten only by the group’s second single off The E.N.D., “I Gotta Feeling.” The latter spent 14 consecutive weeks atop the chart, officially making it the longest-running No. 1 single of 2009. It’s also the best-selling digital single of all time, selling over 15 million units worldwide.

Swift is the only solo female on this list and the most recent artist to accomplish this feat. She bagged two No. 1’s with her songs, “Shake it Off” and “Blank Space,” the first two singles off her most recent album, 1989. “Shake it Off” debuted atop the Hot 100, becoming only the 22nd song to do so. It remained at No. 1 for four non-consecutive weeks. “Blank Space” jumped to the top spot after the premiere of its accompanying music video, remaining there for seven straight weeks and becoming Swift’s longest reign at No. 1. The success of the single made Swift the first woman in the Hot 100’s 56-year history to succeed herself at the top spot.