11 Video Games for Bookworms: From ‘The Great Gatsby’ to ‘Dune’

Some say that you’re either a gaming nerd, or you’re a book worm. Hey, why not both? You’d be amazed at the number of books you can go play around inside of, rather like you can walk around childhood movies in Kingdom Hearts. Like the age-old “that movie wasn’t as good as the book,” many of these games just can’t measure up to literature, but that doesn’t make it any less fun to see what creative ways programers and designers have adapted our favorite page turners to a variety of old and new consoles. Some of them are even playable for free online. I wouldn’t suggest trying to play any of these instead of reading the book for school, though — it’s likely to backfire on you if you explain how Gatsby shoots an army of digital waiters.

1. Odyssey: The Search for Ulysses

This game takes you to all the places you’ve read about with graphics that, at the time, may have even seemed rather impressive. Now not so much, but even so, you can at least appreciate some familiar characters such as the cyclops, the gods, and the army as you walk about as Heriseus — childhood friend of Ulysses. You get to be a Greek from Homer’s epic, just don’t go complaining if the seas look a little blocky. 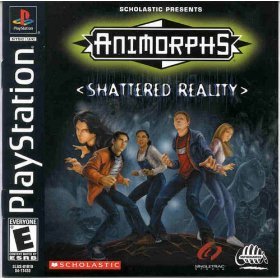 A popular book series in the 1990s, Animorphs came out with over 60 children’s books before it was done. It followed a small group of teenagers who had to fight off alien invaders with a newly acquired power — to absorb animal DNA and transform into their forms in order to fight. Animorphs has seen three separate game play options, one on the Gameboy Color, one on the Play Station, and the other a PC game. The Gameboy Color version is especially funny, as it mimics the old Pokemon game play, bizarre when combined with the storyline of Animorphs. Based on reviews, none of the games are particularly great, and lack for something in terms of storyline, but they’d certainly be good for a throwback Thursday if you were a ’90s kid. 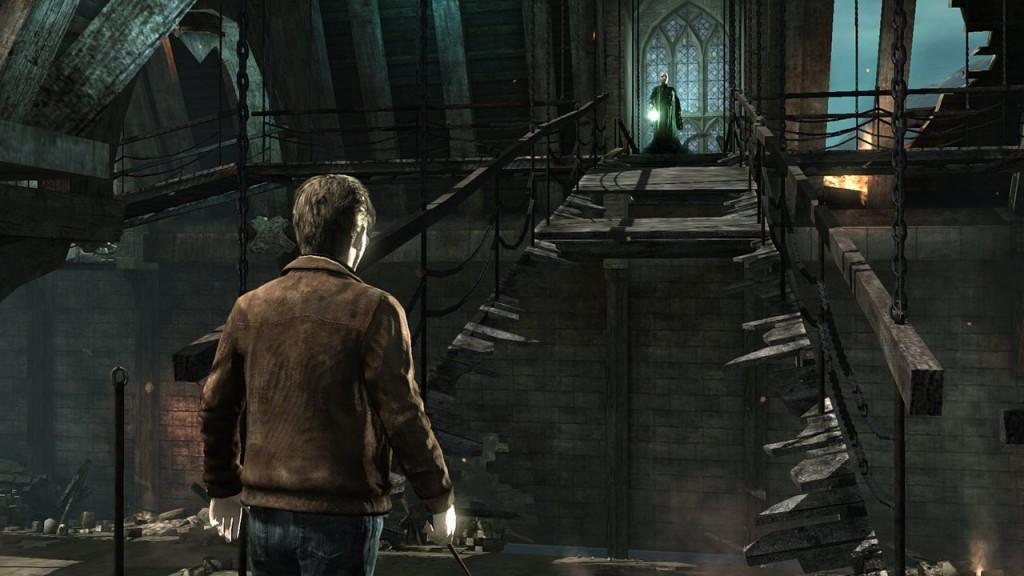 There were seven Harry Potter video games — one for each book. Part of the fun of the games is that you can watch the graphics slowly age and improve, much as you watched the characters mature. Plus, as a bonus, there’s a Lego version and a Kinect game. Similar to the books, the age the games are targeted at changes, with the earliest games containing mostly simple spell tracing with your mouse or collecting Bertie Bott’s Every Flavour Beans while running around a confusing castle. Where the first games are more puzzle oriented, later games include slightly faster paced, darker combat. If you’re a Harry Potter fan, it’s nice to know the gaming world hasn’t neglected you. How could it with a franchise that big? 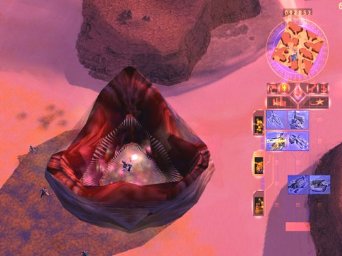 Frank Herbert’s book and the multiple film adaptions that have come and gone are classics. Never fear — it’s the mind killer — because they’re have been many, many games released over the years based on the books. One of them is a very old PC game with a third person perspective on Paul Atreides, called Frank Herbert’s Dune. The others are successive versions of real time strategy games, starting with Dune II and followed by a remake, Dune 2000, then finally a 2001 version, Emperor: Battle for Dune. Basically, you can play first person if you prefer that take on the story, or you can delve into the strategy, political, and military side of the book highlighted. 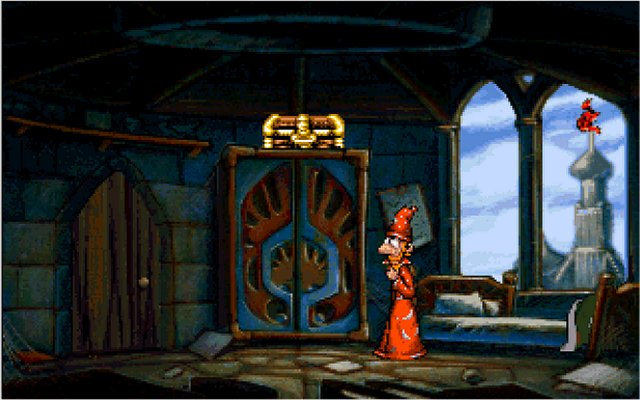 Set in Ankh Morpork, you pay a wizard in Terry Pratchett’s game version of Discworld. The game is a little slow, but it’s witty and has a similar feeling to it that you’d get from the book. Familiar things crop up, and the dialogue has the same “You get paid to eat prunes?” lilt to it. The graphics are animated and low quality, but the illustration is pretty good considering. 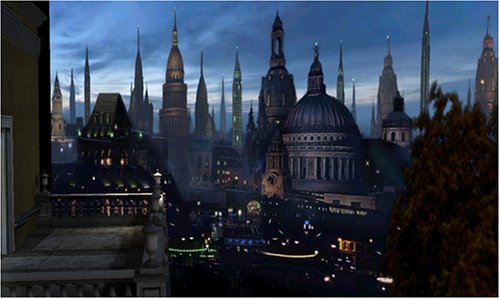 As is the case with many books, the game adaption of The Golden Compass didn’t come out until after the film hit theaters, and if anything, it was a downhill media slope. The movie adaption wasn’t great, and then the video game was just that much worse. On the upside, the game lets you ride Yorick Byrnison in the North and travel with the Gypsy sailors, daemon at your side — so there is something to be said for it.

The game play, while not perfect, does at least take advantage of a wealth of settings and characters from the book, and makes funny little references to items in the book. Your daemon can also change shape, letting you swing or fly depending on its shape, an interesting adaption for gameplay. 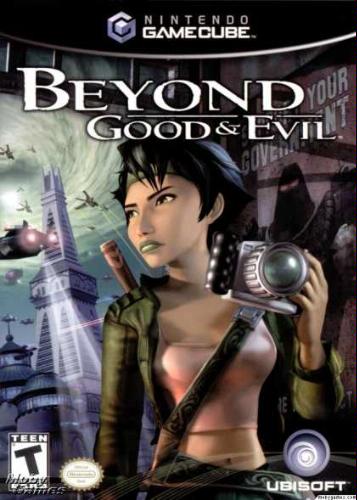 7. Beyond Good and Evil

This is a lose interpretation. The video game is clearly not a perfect recreation of Friedrich Nietzsche’s collection of aphorisms — I can’t quite imagine what that game play would look like –  but it does retain some of the content, slipped slyly into strange points in the game storyline in terms of the message. Others would, and have argued that the game is a poor representation of the underlying meaning of Nietzche’s work. Either way it’s a fun, quick, old game, well worth the time to play through it. Plus, the sequel, rumored for years, may actually come out some day, and then you’ll be glad you did.

The most recent computer games, Crimes and Punishments and The Testament of Sherlock Holmes, both look to retain the things we love about Sherlock Holmes as a character. He’s kind of a jerk, but he’s brilliant, and oh so charmingly eccentric. Crime and Punishments has six cases for you to solve, requiring deductive abilities and attention to detail. The graphics don’t look too shabby either. Of course, there’s a wide collection of free online games for Sherlock Holmes, unsurprising considering how long it’s been out and how many TV and film adaptions have been made from Doyle’s classic. 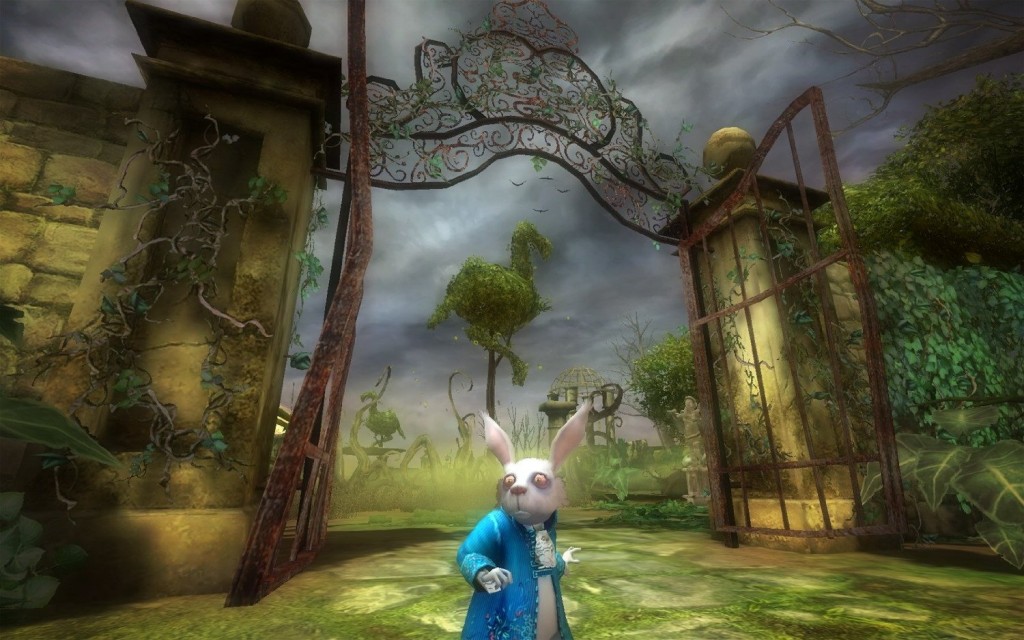 There are almost an overabundance of Alice in Wonderland games, perhaps because the book, in all its bizarre glory, offers a lot of material to work with. There was Alice no Wakuwaku Trump World for the N64, a bizarre Japanese game released in 1998 that let you play cards with weird characters made from furniture in the room. There were a number of other Japanese games, some anime-esque in the style of Phoenix Wright. Nintendo made an Alice in Wonderland game in 2000 for the Game Boy Color where you follow a more classic Disney sort of take of the book with a similarly simple and colorful design. American McGee’s Alice is a very dark third person shooter game, with fairly impressive visuals for being made in 2000 and a pretty damn creepy take on the story. In an equally creepy version, Xbox 360 gives us Alice: Madness Returns.

Then, jumping ahead, after the Tim Burton film came out Wii, Nintendo DS, and Windows PC game out with the 2010 Alice in Wonderland game. If you liked the movie’s stylization, you’ll probably like the game that mirrors it pretty exactly. It also allows you to play other characters, such as Rabbit. 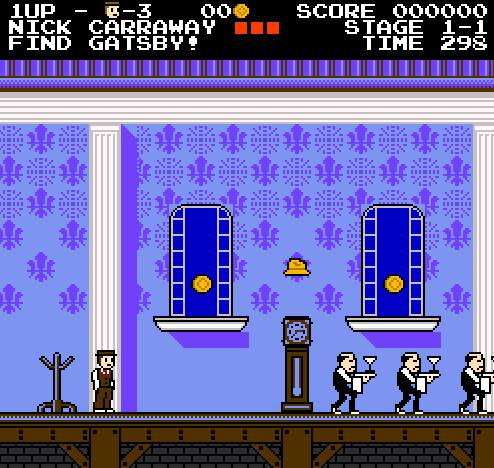 This is a game you can play online, and literature nerds will appreciate the details. The wealthy mansion setting, the attacking butlers, the way you throw your cap to fight, and the drinks you go through the game picking up all are worth a laugh. There’s also attacking dancing women, and Jay Gatsby absolutely says “old sport” in the game, too. There’s even cut scenes with the symbolic green light across the lake, so the storyline isn’t completely lost in a mario-esque gameplay. 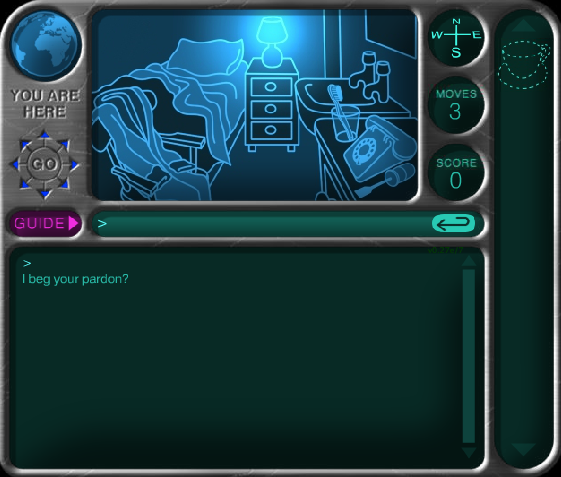 11. The Hitchhiker’s Guide to the Galaxy

This game is great and terrible — both at the same time. If you liked the book, you’ll love the references, and you’ll recognize the same sense of humor and frustrating “mess with you” attitude of the creators. It’s the typed version of the point and click game, so you write “walk to the door” or “push the button,” but sometimes with infuriatingly specific instructions required. It’s not enough to simply type “put on the bathrobe,” rather, first you must walk over and then pick it up and only then can you put it on. The specificity of the instruction requirements fluctuate almost arbitrarily at times, making it that much more like being poked with a stick by the game’s writers.

That’s half the charm, though. It will also lecture you for wasting words via Douglas Adam’s twisted science fiction sense of humor (you caused an intergalactic war in a far off universe) if you take too long to figure out the next move. Plus, there are lots of references to his books from towels to babel fishes to Vogon poetry.

The list doesn’t end here. Well, it does, but there are plenty more things that could be on it. There’s a video game for Fahrenheit 451f, Dinotopia, The Godfather, and of course The Lord of the Rings. There are Nancy Drew video games, and unsurprisingly, The Hunger Games is rumored to be headed for the gaming crowds.