Family Guy is an absurdist comedy about a family living in a made-up Rhode Island town and the wacky adventures they get into with their friends. It has become a pop culture icon, first appearing on Fox in the early 2000s before being canceled prematurely. Cartoon Network helped revive interest in the show, and soon after Fox brought it back to the airwaves. Family Guy is still going, more than 10 years later.

But outside of its disgusting and sometimes misplaced, shock-value humor, there are some tender moments on Family Guy. Let’s take a look at some of the more serious and emotional episodes from the show, including one that absolutely hits you right in the feels. 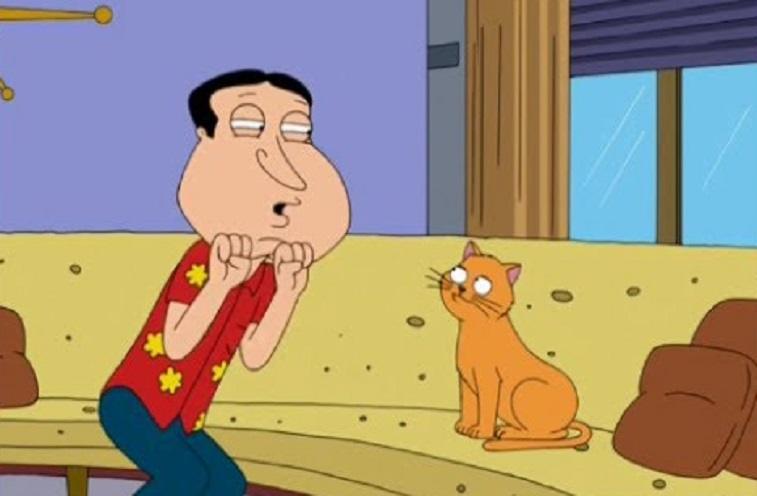 Anyone that watches Family Guy knows Quagmire, Peter’s neighbor and close friend. Quagmire is a one-dimensional character, seemingly dragged out of the 1950s and completely obsessed with sex. That all changes, however, when Quagmire adopts a cat. What makes this all truly sad is that the insensitive Peter accidentally kills the cat while Quagmire is away, leaving his friend to wonder where it has gone. In the end, Peter takes the offered reward money and tells him bluntly, “I killed your cat.”

Next: A moving intervention 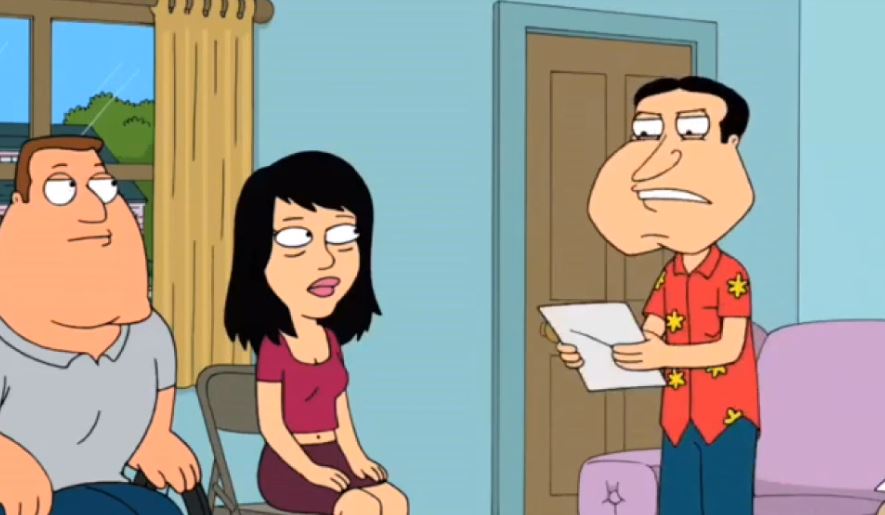 In one episode, Quagmire’s sister, Brenda, makes an appearance on the show. The storyline revolves around her being in an abusive relationship with a boyfriend, and so Quagmire, Joe, and the Griffin’s decide to have an intervention. Although most of it is played for laughs (as usual), Quagmire’s speech to his sister is particularly painful.

Brenda, the fact that you are being abused has affected my life in the following ways. The sister that I knew and loved growing up no longer exists. The person I see before me right now is just a punching bag. And I call you “person” and not “woman,” because a woman is a strong, beautiful vibrant creature. A woman embraces life. A woman makes choices to make her life better. Sadly, the fact that you are with Jeff proves to me that you have made a choice to make your life worse. I want the girl who I grew up with back. I want … I … I want my sister back.

It’s about as moving as Family Guy gets.

Next: Suicide is no joke 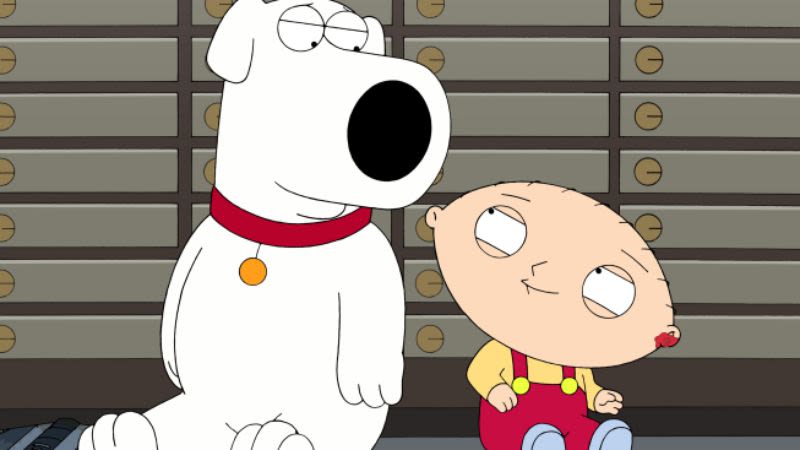 One episode of Family Guy, titled “Brian & Stewie,” features just those two characters after having been locked in a bank vault overnight. They talk about many things, some funny and some serious. But the truly tear-jerking moment is when Stewie asks Brian why the only things he keeps in his safety deposit box are a bottle of scotch and a gun. Brian talks about how sometimes life can be too much, and he keeps them in there in case he wants to commit suicide and for one final drink before pulling the trigger.

Next: A hard lesson at a young age 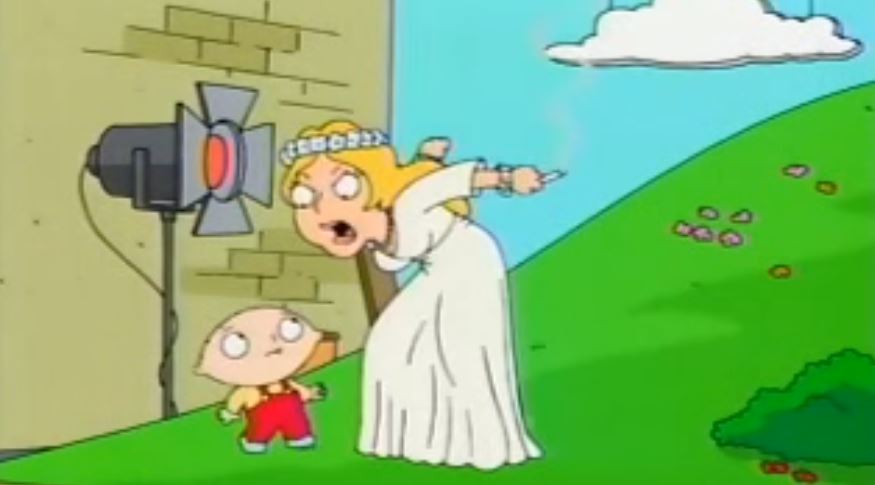 In an early episode titled “Road to Europe,” Brian follows Stewie on an adventure to England. Stewie wants to go live with the people on a children’s show he watches, Jolly Farm Revue, because he has become entranced by the sweet-voiced lead in the show, Mother Maggie. Upon arriving, Stewie has his heart crushed when Mother Maggie speaks to him rudely, yelling in between puffs on a cigarette. It’s a hard early lesson for the baby to never meet your heroes, and likely something we all could relate to.

Next: Joe and Bonnie’s marital problems 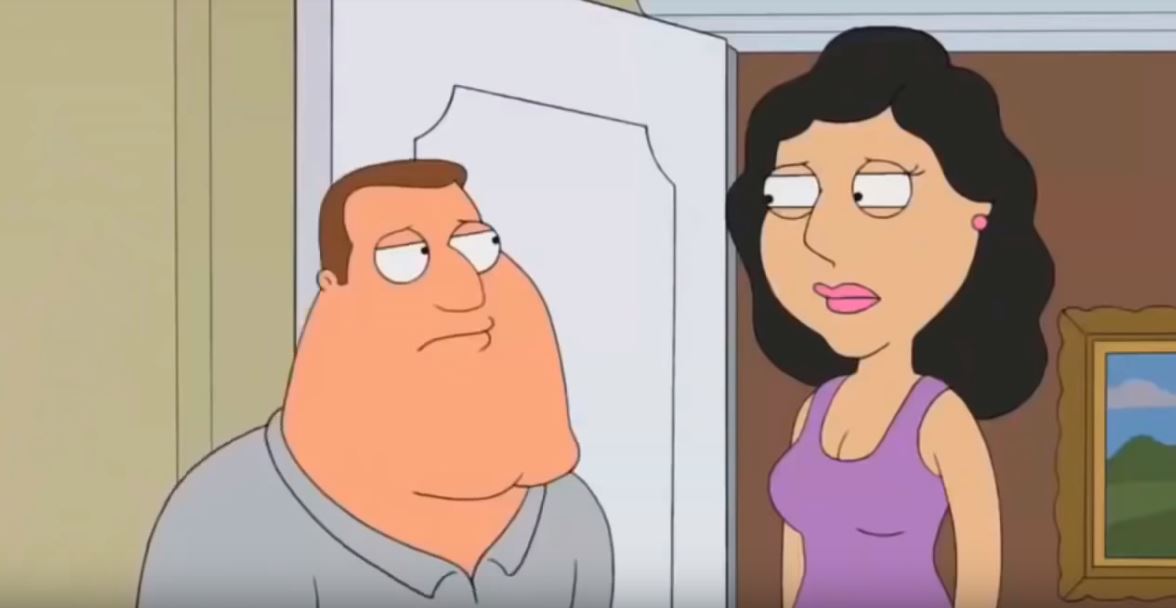 The relationship between Joe and Bonnie evolves quite a bit over the years. In the early seasons, the joke was related to Bonnie’s pregnancy, seemingly stuck in time. Later, she does finally give birth to a baby girl. But Joe and Bonnie’s marriage becomes the new running gag for the side characters, getting progressively worse as time goes on. The hardest part? Her lack of love for her husband has everything to do with his inability to walk. Eventually, Bonnie admits to Lois that she has had several affairs. Heartbreaking stuff.

Next: More on the topic of suicide 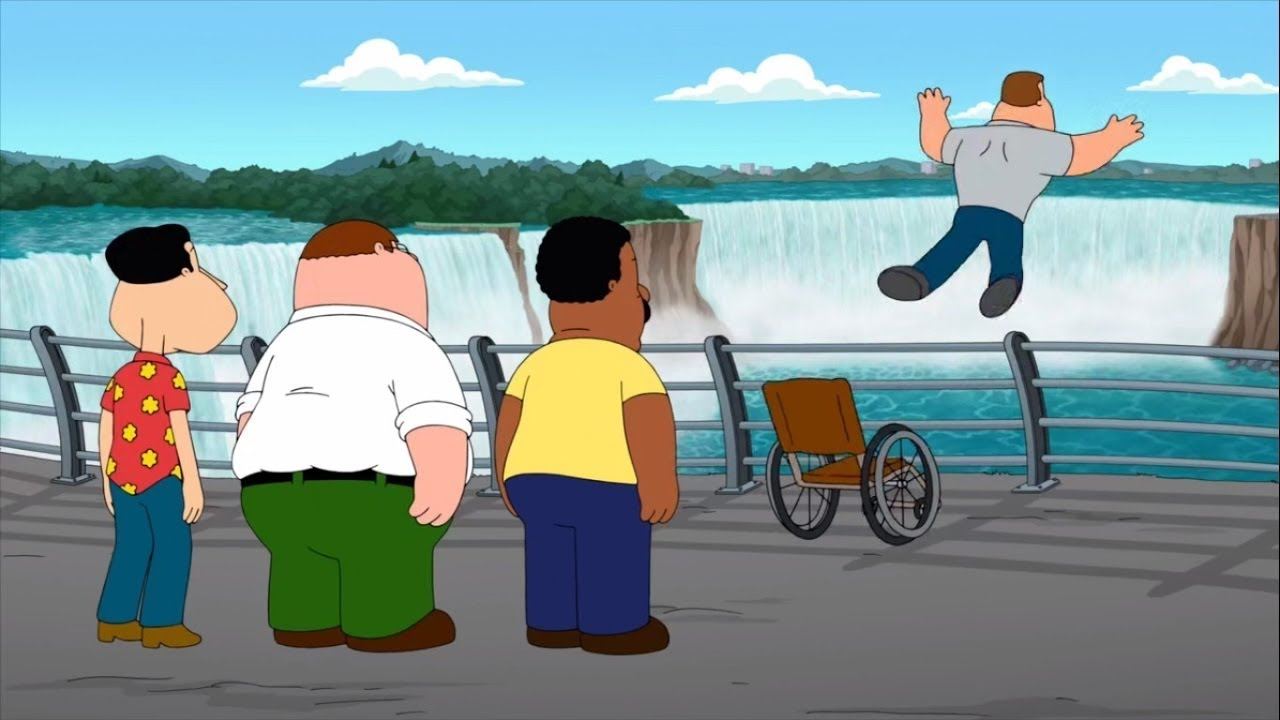 Going in that same direction, another dark corner of Family Guy relates to Joe and his apparent disinterest in continuing to live. There are several examples of this on the show, including an episode where he actually attempts to kill himself by jumping the fence at Niagara Falls. In another instance, he makes it clear that he is hoping that a robber with a gun (actually Stewie in disguise) will shoot and kill him. The fact that his suicidal depression is related to his awful marriage and disability makes it even sadder.

Next: A moving moment between Brian and Meg 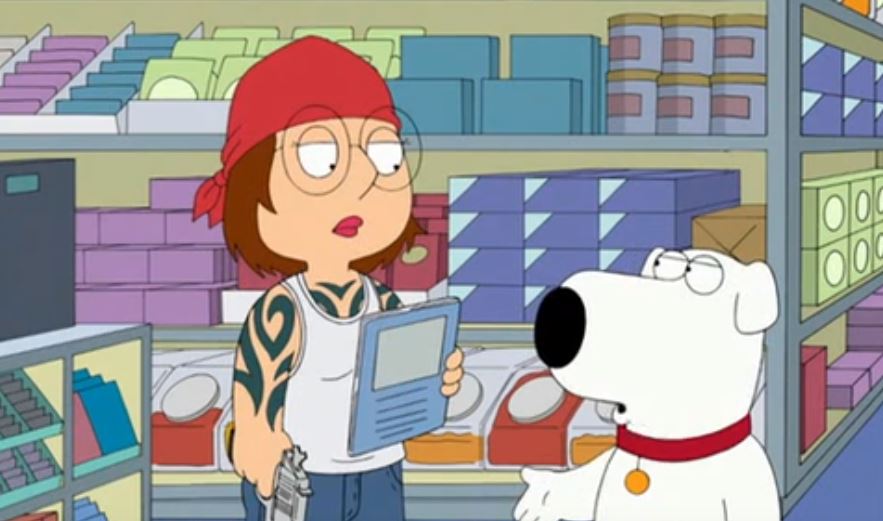 In “Dial Meg for Murder,” Meg goes to juvenile hall for harboring a fugitive — her boyfriend who recently broke out of prison. She comes out completely changed, hardened to the core and terrifying to her family. The episode has plenty of laughs, but is also clearly a social commentary about what the American prison system does to people. It comes to an emotional end with Meg reading an excerpt from an article that Brian had written about her.

“And in the face of every adolescent challenge, she looks at the world through hopeful eyes and maintains an uncommon resilience that can only be admired. In this sense, Meg Griffin is not the typical American girl. She is far sweeter and kinder than that.” 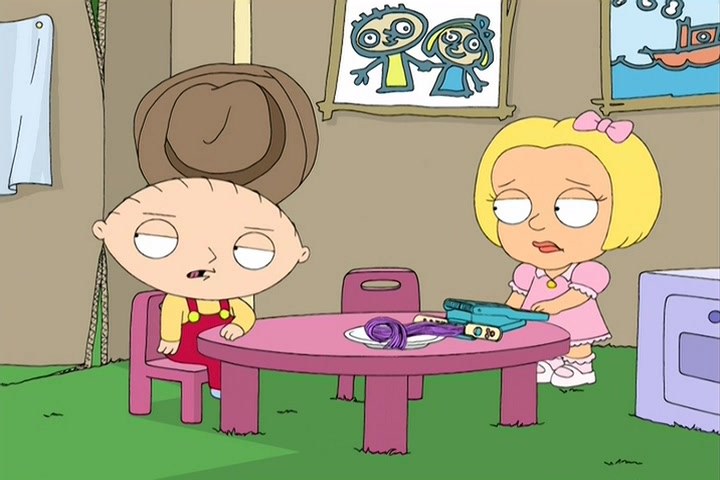 In “From Method to Madness”, Stewie falls in love with a little girl named Olivia. They have a hard relationship, mirroring that of adults. She returns in an episode titled “Chick Cancer,” and the pair stand up in front of all their stuffed animals and having a wedding. But things once again get painful between Stewie and Olivia, to the point where Brian recognizes Stewie’s denial and repeatedly tells him, “It’s not your fault,” until Stewie bursts into tears. So many adults can likely relate. Eventually, Stewie finds Olivia “cheating” on him, playing with another little boy.

Next: Meg has no friends 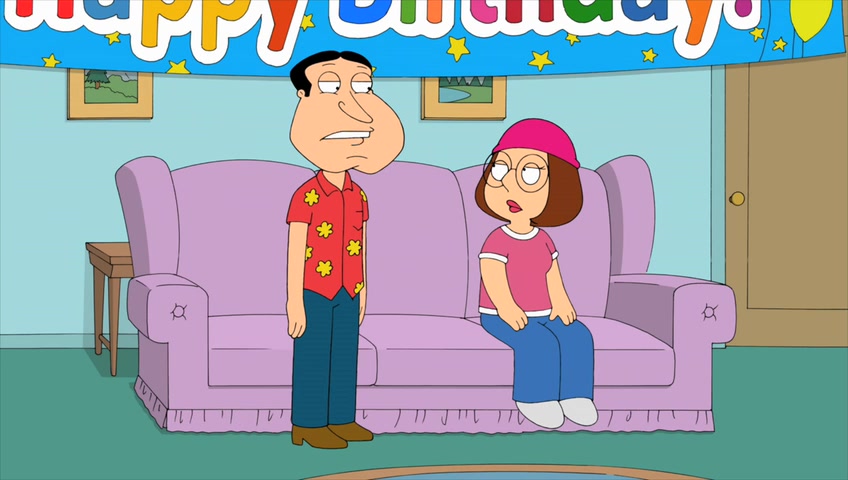 It’s no secret that Meg is the black sheep of the family. The running gag with her is that nobody likes her, not the kids at school, and most definitely not her own family. But on occasion, there are touching moments where the family comes around on Meg. In “Quagmire and Meg,” it’s her 18th birthday. When nobody shows up to Meg’s surprise party, she’s understandably heartbroken. Not only is that hard to watch, but the fact that Lois and Peter feel bad for her makes the whole thing really sad.

Next: Why Peter is the way he is 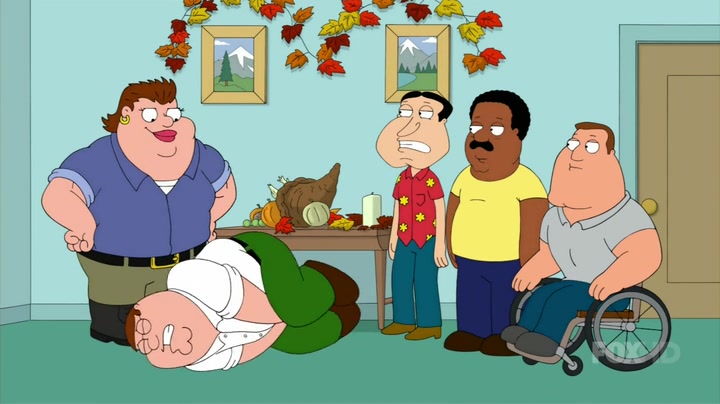 In Season 14, we learn that Peter has a sister named Karen. Played by Kate McKinnon, Karen gives us a peek into why Peter is such a jerk. She’s a professional wrestler with the stage name “Heavy Flo,” and she hasn’t exactly been kind to Peter throughout their lives. She’s a major bully, sharing embarrassing stories about her brother at Thanksgiving and knocking him out during a family football game. It’s another Family Guy abuse story parlayed into a funny, 22-minute romp.

Next: Lois learns she has a brother, but … 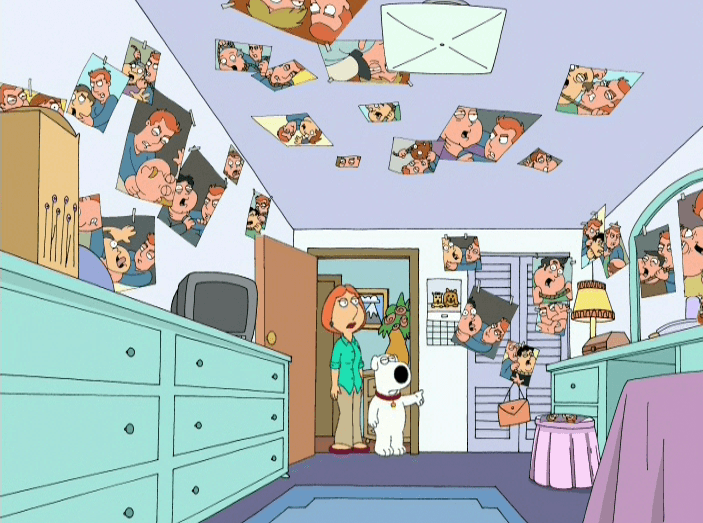 Robert Downey Jr. made an appearance on Family Guy in “The Fat Guy Strangler.” Lois learns that she has an older brother, Patrick, who has been in a mental institution for the last 30 years. She decides to get him out of the institution, but that ends up being a mistake when fat guys begin being strangled to death in Quahog. In the end, Lois has to say goodbye to her brother and put him back in the institution. It’s an emotional moment.

Next: Another surprise member of Quagmire’s family 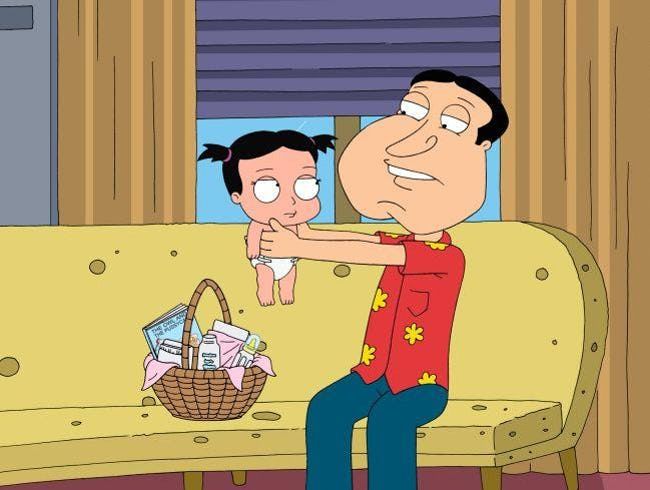 Yet another episode deals with an emotional Quagmire story. He learns that he has a young daughter when the baby is left on his doorstep by one of his many sexual partners. Quagmire enjoys having the little girl, but she starts to get in the way of his lifestyle. Eventually, Quagmire gives up the baby for adoption. But he soon after realizes he made a mistake, and goes to get his daughter back. Upon learning that she’s with a good family, he realizes that this is what’s best for her and leaves.

Next: Stewie loses a close friend 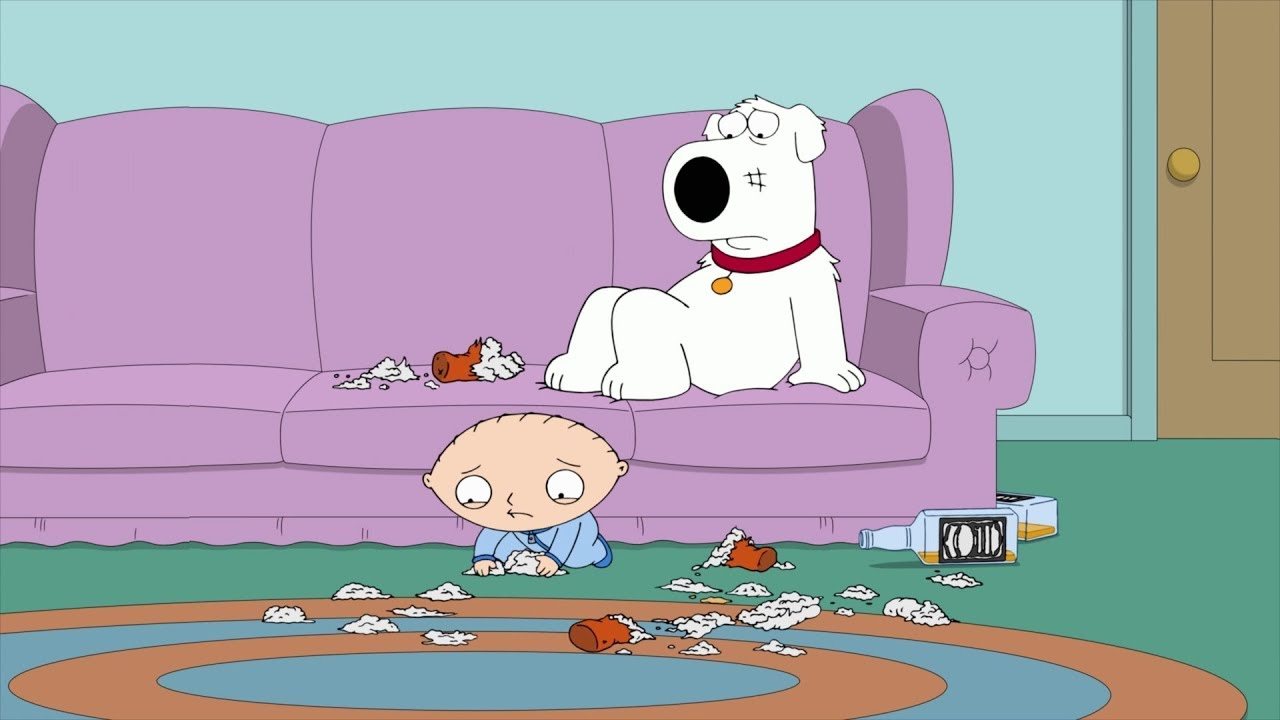 In the episode “Dog Bites Bear,” Brian drunkenly rips Stewie’s teddy bear, Rupert, to shreds. Stewie sees Rupert as his friend and as a real person, so he’s understandably upset about this. This part of the episode is hard to watch, as it recalls back to your youth and having a favorite toy or stuffed animal that you were attached to. There’s a major rift between Brian and Stewie, but the dog fixes it by buying a replacement Rupert. It’s a pretty emotional episode.

Next: Brian loses a loved one 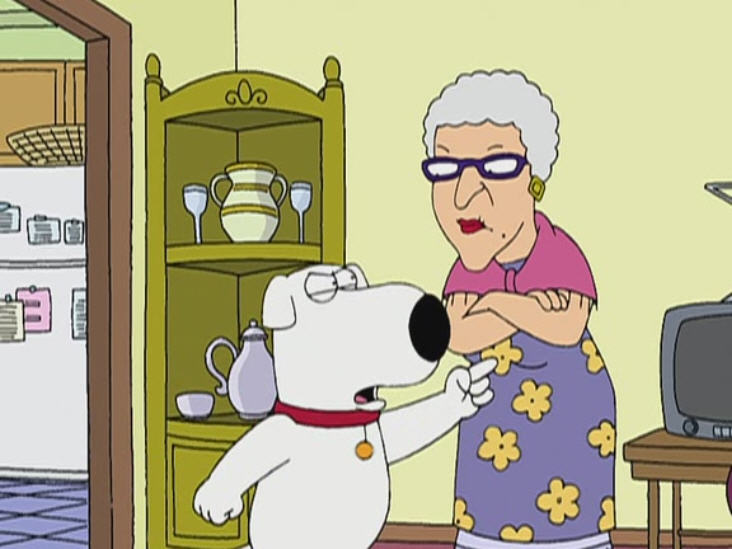 In “Brian Wallows and Peter’s Swallows,” Brian is forced to do community service. That sets him up helping out an elderly shut-in, Pearl Burton. Although they don’t get along early, Brian and Pearl build a strong relationship. He convinces her to get out of the house and see the world, and she does. However, she’s pretty quickly hit by a truck. Before she dies from her injuries, Brian uses a virtual reality helmet to show her what their future would’ve been like together.

Next: The big one

The undeniably most heartbreaking moment in Family Guy history is the episode “Life of Brian.” Stewie and Brian come back from one of their many time-traveling adventures, and Stewie decides that it’s time to destroy his time machine so that he can never use it again. Unfortunately, that becomes extra painful when Brian is hit by a car and killed. Losing Brian is enough to make anyone that has ever lost a pet shed some tears, but watching Stewie deal with the loss is extra hard.

Eventually, the Griffins get another dog, Vinny, who just wants to have a good home and be Stewie’s friend. Fortunately for Stewie and Brian, several episodes later he realizes that there’s a way that he can still go back and stop Brian from dying. At any rate, the entire story arc is depressing.