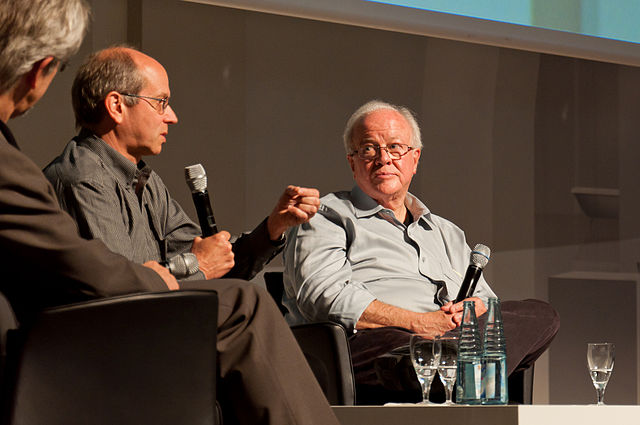 When Stanley Kubrick’s 2001: A Space Odyssey came out in 1968, moviegoers didn’t know what to make of it. Most people still don’t know what to make of it, but they know somehow, in some ineffable way, that they’re experiencing a masterpiece, and they try to ascertain what it is that makes Kubrick’s film so awesome (in the Kantian sense of the word.)

The mastermind behind the special effects, Douglas Trumbell, worked with Kubrick to capture the wonders of the universe, at once ethereal and infinite, indiscernible and immediate. Kubrick wanted to engender the same sense of awe as How the West Was Won, which was shot on Cinerama 3-strip, a process of projection that utilized three 35mm projectors all throwing different images at the same curved screen, which was arced 146 degrees. The process was expensive and very far from pragmatic as only a select few theaters possessed the funds and technology to showcase films in Cinerama.

After How the West Was Won, Cinerama was usurped by the superior Super Panavision 70, a non-anamorphic 70mm format that used spherical optics and filmed in a 2.20:1 aspect ratio. Super Panavision 70 was used for such epics as Exodus, West Side Story, and Lawrence of Arabia. Kubrick, who referred in jest to his work-in-progress as How the Universe Was Won, sought that epic feeling for his film, but the technology he required didn’t exist.

There were no good photographs of Jupiter at the time, and artists couldn’t paint a convincing emulation, so Trumbell created what he called the Jupiter Machine. Here’s a brief description of the Jupiter Machine, to give you a vague sense of how complicated and intricate the many processes through which Kubrick and Trumbell went in order to achieve the singular look of 2001′s final psychedelic section: Trumbell used a slit-scan rotated slowly, over many hours, creating a spherical distortion. Multiple motors created multiple exposures on an original negative. If that sounds like a foreign language to you, it’s okay. Trumbull says his vision can’t be captured in words.

Trumbell’s other notable credits include Steven Spielberg’s Close Encounters of the Third Kind, Star Trek, Blade Runner, and Trumbull’s directorial debut Silent Running. Silent Running didn’t achieve even a sliver of 2001′s unfathomable success, but its SFX and design are similarly stunning. Trumbull again commingled new innovative technologies with old fashioned thriftiness, using his marvelous cameras and lenses and an old freighter ship to create a vision of the future. Hill Street Blues and NYPD Blue creator Steven Bochco and The Deer Hunter director Michael Cimino were two of the three writers of Silent Running, and Shaun of the Dead director Edgar Wright is a big fan of the film.

For his film Brainstorm, essentially just an experiment to test out new technology, Trumbull created the Showscan process, which shoots 70mm at a rate of 60-frames-per-second. For the sake of comparison, Peter Jackson’s Hobbit films were shot at 45-frames-per-second, and that was considered revolutionary. He was just 15 frames and 30 years late.

Now, Trumbull — who turned 72 last month — is revolutionizing the film industry again. His new short films, the ten-minute UFOTOG, involves a skeleton crew, green screen, and a “zero-G” camera crane. It’s shot in 3D at 4K, 120 frames-per-second. It will either be the most lucid short film ever, or it will give you a splitting headache.

The short, like Brainstorm, is a platform for showcasing Trumbull’s new inventions. The film premieres at this year’s Seattle Cinerama’s Science Fiction Festival where it will be touted as the centerpiece. The film uses conventional computers packed with special ION software, and Trumbull promises that it will present a completely new immersive movie-going experience. The technology is called Magi, and it works on any frame-rate and any resolution, synchronizing with the natural frequencies of any projector. Magi can, according to Trumbull, keep production costs down while elevating production value exponentially. If Trumbull’s right, this short could make Gravity look like amateur hour.

In a long post on his website, Trumbull elucidates his cathexis for experimenting with frame rate. “Few professionals are aware that digital projectors are regularly operating at 144 frames per second, since the movies are still shot at 24 fps, and thus each frame is projected several times in order to retain the “no flicker,” while also accommodating the needs of 3D, where each frame is “flashed” three times for each eye alternately, so that each eye receives 72 flashes, thus the total of 144. This potential to dramatically increase the frame rate is being largely ignored, although modest increases to 48 fps (such as Peter Jackson’s The Hobbit, in production) have been adopted, and Jim Cameron’s Avatar II and III may soon be shooting at 48 or even 60 fps. These filmmakers have realized that the old standard of 24 fps is inadequate to 3D’s needs, and often results in objectionable blurring and strobing that diminishes or destroys the 3D effect altogether on fast action.”

Peter Jackson’s use of 48-FPS was highly derided by moviegoers for the perceived artificial quality in which it renders the film’s imagery. Some claimed they could see the seams on props and discern the makeup on actors’ faces. The reason movies have a cinematic look is because they’re typically run at a lower frame-rate and have a specific, unnatural look to them that we have long associated with cinema. Now that movies aren’t being shot on film, Trumbull wants to know why people insist that movies should be shot at lower frame-rates when digital technology allows you to film at a high frame rate at no additional cost.

Trumbull is trying to convince James Cameron to use Magi for the rest of the Avatar series. It remains to be seen what will happen with Magi, or where Trumbull will go with it, but it undoubtedly has the potential to change the filmmaking business. The following is the trailer for UFOTOG.