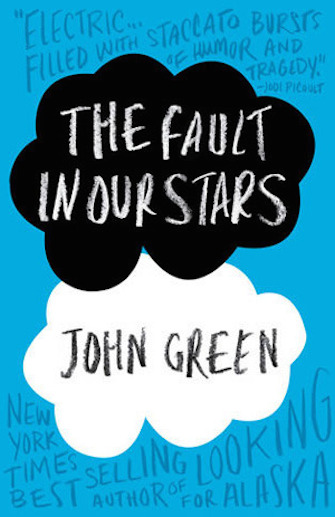 Young adult novels are proving to be as popular as ever. Nielsen just released its annual list of the top-selling books of 2014 and YA fiction clearly dominated the year, nabbing 8 out of the ranking’s 10 spots.

As is evident from the list, the majority of the novels on the list received a notable sales boost from a tie-in film adaptation. Unsurprisingly, one YA work in particular won out over the rest: The Fault in Our Stars by John Green. Though the teen tearjerker novel was first published back in 2012, the big screen adaptation (starring Shailene Woodley and Ansel Elgort) only hit theaters this year and quickly became a box office hit, propelling the book to top the list of Twitter’s most talked about books this year as well. This success helped the title to become the No. 1 bestselling book of the year for its paperback version, as well as occupy two more of the top 10 slots in its hardcover and movie tie-in forms.

Likely boosted by the popularity of TFIOS, Green also managed to nab the tenth spot on the list for his 2005 title, Looking for Alaska. The novel is the only book on the ranking that is neither part of a franchise nor related to a 2014 film, although a future big screen adaptation is reportedly already in the works. A special tenth anniversary edition of the book was also publicized and made available for preorder this fall — a factor that may help it climb up in the ranking next year.

Veronica Roth’s Divergent and its  sequels Insurgent and Allegiant, claimed the second, third and fourth spots on the list, boosted by this year’s film adaptation of the first title (which also starred Woodley). Insurgent, the second installment in the movie franchise, is scheduled to hit theaters in March.

The Long Haul, the latest entry in Jeff Kinney’s Diary of a Wimpy Kid series, came in sixth, followed by the first of only two non-YA novels to make the cut: Gone Girl. The mystery thriller written by Gillian Flynn was also first released in 2012, but received a critical praise for its film adaptation, starring Ben Affleck and Rosamund Pike, this year. Perhaps the biggest outlier on the list is Bill O’Reilly’s Killing Patton: The Strange Death of World War II’s Most Audacious General, which marks the fourth book in his Killing franchise and ended up nabbing the ninth spot on the list.

If Nielsen’s ranking proves anything, it’s that YA fiction is only continuing to gain popularity among readers of all ages — despite the public debate that took place earlier this year over the legitimacy of the genre for adult readers. Regardless of whether you’re a fan or not, it’s clear that YA is proving to be nothing but profitable to the publishing industry. As Flavorwire points out, book sales actually went up this year, in part due to the rise of Young Adult and Children’s books, which saw an increase of 22.4% in sales over 2013.

Here’s the list of Nielsen’s bestselling books of 2014 in its entirety: