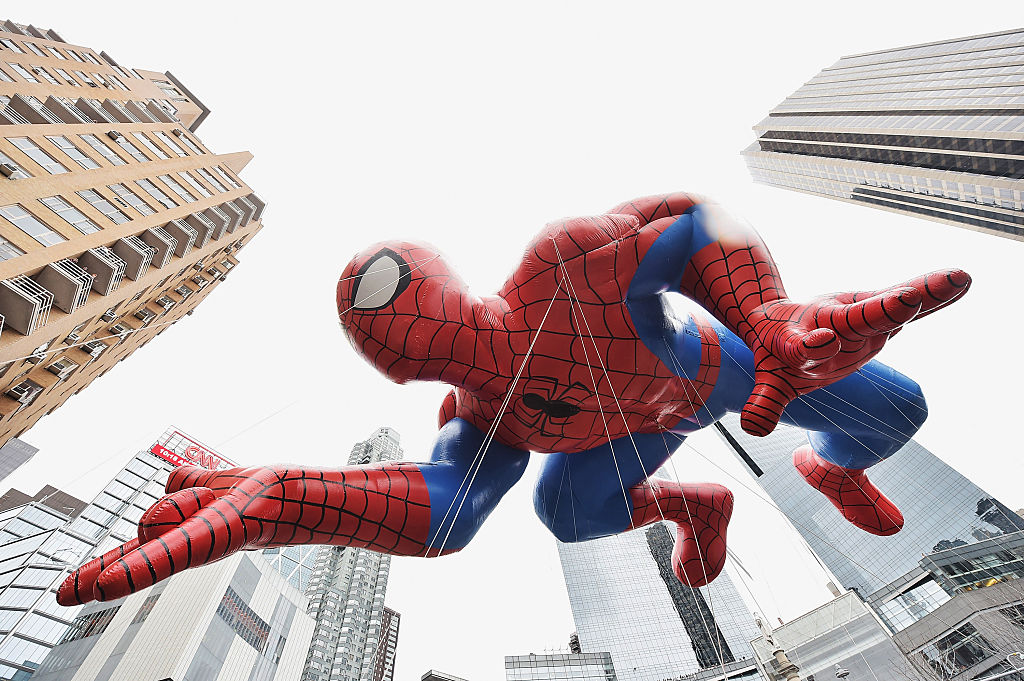 What is Thanksgiving without Macy’s balloons? For the past 92 years, the department store has helped all of America ring in the holiday season with giant inflatables depicting favorite television, movie, and book characters. And, get this: Many of them are taller than a two-story building! Curious to know what balloons you’ll see in this year’s festivities? Here’s your 2018 Macy’s Thanksgiving Day Parade Balloon Guide.

Macy’s star balloons are seen throughout the parade in different variations. But, perhaps its most famous star balloon is the Yellow Macy’s Star. The 25-feet tall, 12-feet deep, and 24-feet wide balloon requires 12 handlers as it makes its way down the parade route.

Helping kick off the holiday season is the Universal Nutcracker. The 45-feet tall, 16-feet deep, and 18.5-feet wide balloon made its first parade appearance last year in the Universal Holiday Parade featuring Macy’s at Universal Studios Orlando. This year, it’s headed to the big apple for a Thanksgiving debut.

Trolls fans, get excited! The trolls are back this year with a balloon featuring Poppy, Branch, and Guy. The 38-feet tall, 57-feet long, 38-feet wide balloon showcases all three characters on their Caterbus, waiting to head down the parade route.

Toothless from ‘How to Train Your Dragon: The Hidden World’

Everyone’s favorite dragon is also making a Thanksgiving comeback. This year, catch Toothless from How to Train Your Dragon: The Hidden World and its 90 handlers flying down the Macy’s Thanksgiving Day Parade route.

The Elf on a Shelf

Santa’s favorite helper will also ring in the holiday season. The 46-feet tall, 64-feet long, 28-feet wide Elf on a Shelf will make an appearance in the Macy’s Thanksgiving Day Parade just before the big man himself.

Next year marks the 20th anniversary of Spongebob Squarepants. And, in honor of the milestone, Nickelodeon will send Spongebob down the parade route for its 13th time. The 44-feet tall, 41-feet long, 34-feet wide blowout sponge and its 90 handlers will be a hit during Thursday’s festivities.

It wouldn’t be Macy’s Thanksgiving Day Parade without Ronald McDonald. The 67-feet tall, 61-feet long, and 29-feet wide balloon first debuted in 1993 and is celebrating its 25th consecutive parade anniversary this year.

Another balloon celebrating its 25th anniversary? The iconic Red Mighty Morphin Power Ranger. The giant balloon is the largest balloon on the parade route, measuring at 56-feet tall, 77-feet long, and 26-feet wide.

You can expect to see a lot of stars on this year’s parade path. In addition to the yellow Macy’s stars, the Red & Gold Macy’s Starflakes will also make their way down the streets of New York City. Fun Fact: The Macy’s star balloons represent the parade’s color scheme.

The Red “Believe” Stars will also be en route down the streets of New York City this Thursday. “Believe” is Macy’s holiday theme.

Thanksgiving dinner wouldn’t be the same without Pillsbury. This year, catch the company’s 46-feet tall, 54-feet long, and 34-feet wide mascot giggling down Manhattan. This balloon is so big that it would take over four million crescent rolls to fill the inflatable.

Pikachu has graced our TV screens (and the parade path) for 18 consecutive years. Dressed for the winter season in a green scarf with a snowman Pikachu, the 53-feet tall, 36-feet long, and 29-feet wide cartoon balloon is a Macy’s Thanksgiving Day Parade must-see.

Do you want to build an inflatable snowman? Frozen fans will be pleased to know that Olaf is returning this year in honor of Frozen The Broadway Musical. The 60-feet tall, 59-feet long, and 32-feet wide snowman will float down the streets of New York City Thanksgiving morning.

Jett from Super Wings on Netflix and Universal Kids will also make its way down the parade route. The 31-feet tall, 47-feet long, and 39-feet wide inflatable requires 90 handlers and has a wingspan of an actual Learjet.

The Grinch is also ringing in the holiday season. Measuring at 37-feet tall, 49-feet long, and 24-feet, the updated design honor the new version of Dr. Suess’ The Grinch, in theaters in November.

Greg Heffley also makes a Macy’s Thanksgiving Day Parade appearance. In celebration of the 13th book in the series, Diary of a Wimpy Kid: The Meltdown, this is the 9th consecutive year for the 62-feet tall, 62-feet long, and 32-feet wide character.

Dino is a Macy’s Thanksgiving Day Parade classic. The 36-feet tall, 72-feet long, and 24-feet wide inflatable Apatosaurus made its first appearance in 1963 — 55 years ago!

It wouldn’t be the same without a classic Peanuts character. This year, Charlie Brown will float down with his kite for another year of holiday fun. The balloon is 46-feet tall, 53-feet long, and 31-feet wide. Following the festivities, the beloved character will head over to NASA to help teach children about space exploration next year.

Can you spot the Blue & White Macy’s Stars? The fourth pair of stars will float down Manhattan in honor of the holiday season.

In addition to stars, Macy’s is debuting a new shaped balloon — the Americana Spheres. The round floats feature a blue and white star sphere and a red and white striped sphere to celebrate patriotism. Fun fact: The original idea for this design came from Macy’s designer Manfred Bass in the 1980s.

This year’s newest balloon character is Sunny The Snowpal by Macy’s. The 27.8-feet tall balloon is based on a character created for the department store’s 2018 holiday campaign.

Don’t miss the adorable Little Cloud balloon by Friendswithyou. The 22-feet tall balloon is new for 2018 but was originally created back 16 years ago by Samuel Borkson and Arturo Sandovall III to represent light, tranquility, and unconditional love — something we can use a bit more of this holiday season.

Goku from Dragon Ball is also making his Thanksgiving Day debut this year. The balloon is five stories tall and features a new design — Super Saiyan Blue form — in honor of the franchise’s new era.

Fleck, Bjorn, Jojo, and Hugg from Netflix’s The Christmas Chronicles are also new this year. The charming elves are each around 30 feet tall, require 40 handlers, and are the first-ever Netflix characters to march in the parade.