The 92nd annual Macy’s Thanksgiving Day Parade floats are ready for their 2018 debut. This year’s parade route includes a collection of classic favorites like Santa’s Sleigh and Rocking Horse, along with new designs by Kinder, Nickelodeon, and Elf on a Shelf. In addition, spectators and those watching at home can enjoy performances by Ashley Tisdale, the Barenaked Ladies, Sugarland, Pentatonix, and more. Here’s your guide to the 2018 Macy’s Thanksgiving Day Parade Floats. 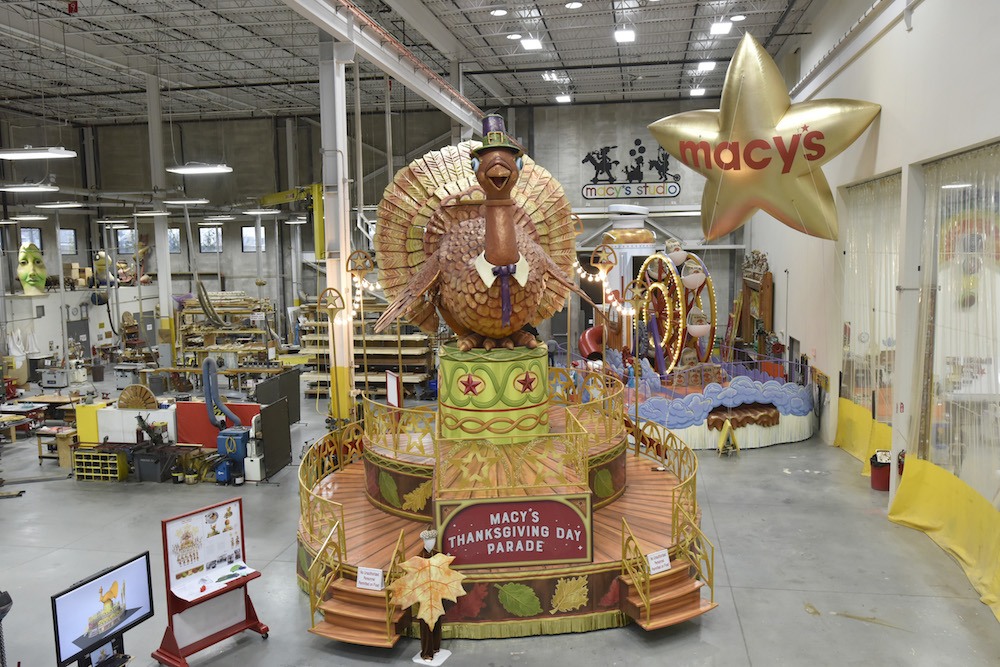 Ashley Tisdale will make her way down the parade route this year on the all-new Fantasy Chocolate Factory float by Kinder. The float features a steampunk take on a vibrant chocolate factory.

Sponsor: Elf Pets and The Elf on a Shelf
Performer: N/A

Another new float making its debut in the Macy’s Thanksgiving Day Parade? Santa’s Saint Bernards Save Christmas by Elf Pets and The Elf on a Shelf. Inspired by the new holiday series, the float features six animated animal sculptures and their Elf on a Shelf friends.

The Splashing Safari Adventure float is another newcomer this year. It features a performance by Ella Mai and a decorated structure of safari animals including a confetti throwing elephant and towering giraffe.

This year’s lead float is Tom Turkey. The festive structure features flapping wings, confetti, and is accompanied by cheerleaders and showgirls to ring in Thanksgiving.

This year marks Sesame Street’s 42nd consecutive year on the Macy’s Thanksgiving Day Parade. Follow along as all your favorite characters march down Sixth Avenue.

The Big City Cheer! float is accompanied by over 500 cheerleaders from squads across America. Mackenzie Ziegler and Johnny Orlando are set to perform while the spirit leaders cheer on parade crowds and spread holiday cheer.

Ronald McDonald will make two appearances this Macy’s Thanksgiving Day Parade — in balloon form and human form! The famous clown will ride down Sixth Avenue in his one-of-a-kind shoe car.

Join the Girl Scouts of the USA and Tegan Marie on the Building a Better World float. The float is inspired by Girlscout’s leadership and community efforts.

Deck the halls with over 300 feet of garland and a Balsam Hill Vermont White Spruce. Featuring a performance by Martina McBride, the Deck The Halls float is one you don’t want to miss.

The Build-A-Bear Discover Adventure float features a performance by John Legend and the company mascot, Bearnard and friends aboard a sailboat across the high seas of New York City.

Everyone’s Favorite Bake Shop featuring Pentatonix will also make an appearance this Thanksgiving. The bakery-inspired float took over 15 gallons of paint and hours of work from the Macy’s Parade Studio.

Discover NHL Thanksgiving Showdown returns to the street of New York City with the Frozen Fall Fun float. This Thursday, watch as kids take a shot against a large turkey goalie on the floating ice.

This Thanksgiving, join Rita Ora on the Krazy Glue Fun House. The float features furniture glued to the ceiling, towers of chairs, and other craziness.

Harvest in the Valley

Celebrate the fall harvest with Green Giant’s Harvest in the Valley float. The rolling landscape features green beans, corn, and other fall vegetables, as well as a performance by Carly Pearce.

This Thanksgiving, follow Diana Ross and family along on this moving advent calendar by Hallmark Channel. The float also features a fireplace centerpiece to symbolize coming together with family for the holiday season.

It’s not the holidays without a little choir serenade. Join the Macy’s Singing Christmas Tree Choir as they head down New York City streets in this Christmas tree-inspired structure.

You don’t need to go to Mount Rushmore to catch a glimpse of Washington, Jefferson, Roosevelt, and Lincoln. South Dakota Department of Tourism brings the iconic landmark to New York City with Mount Rushmore’s American Pride float and performance by Kane Brown.

On The Roll Again

Next to Santa’s Sleigh, the Rocking Horse is one of the most impressive floats in the Macy’s Thanksgiving Day Parade. The Horse was made by legendary parade designer Manny Bass and has made its way down Sixth Avenue for over 40 years.

Celebrate the season’s whimsical side with Macy’s Rocking Lobster. The crustacean is joined by a real-life mermaid for an added touch of holiday magic.

Don’t miss the wooden Rocking Moose by Macy’s. The float first debuted in 2007 and has become a Macy’s Thanksgiving Day Parade classic ever since.

Perhaps the most anticipated float of the Macy’s Thanksgiving Day Parade, Santa’s Sleigh makes its way down the streets of New York City just in time to ring in the holiday season at Macy’s.

Join Ally Brooke aboard the Shimmer and Shine float by Nickelodeon. The float is inspired by the hit preschool series and features glitter, gems, and jewels to bring the Zahramay Skies and genies to life in New York City.

It wouldn’t be the holidays without our favorite Peanuts characters. This float features Charlie Brown, Snoopy, and a blue doghouse in honor of the holiday classic, A Charlie Brown Christmas.

This island getaway float by King’s Hawaiian is a piece of paradise in cold fall temperatures. The palm tree covered structure features a confetti-filled volcano and performance by the Barenaked Ladies.

In honor of the 700 farmer families behind the Ocean Spray Cooperative, the Cranberry Cooperative float features a large turkey and goose on an ocean of cranberries.

Designed with modern art and cut paper sculpture in mind, the Universal Playground by Universal Kids features a jungle gym that inspires kids to try new things and always have fun.