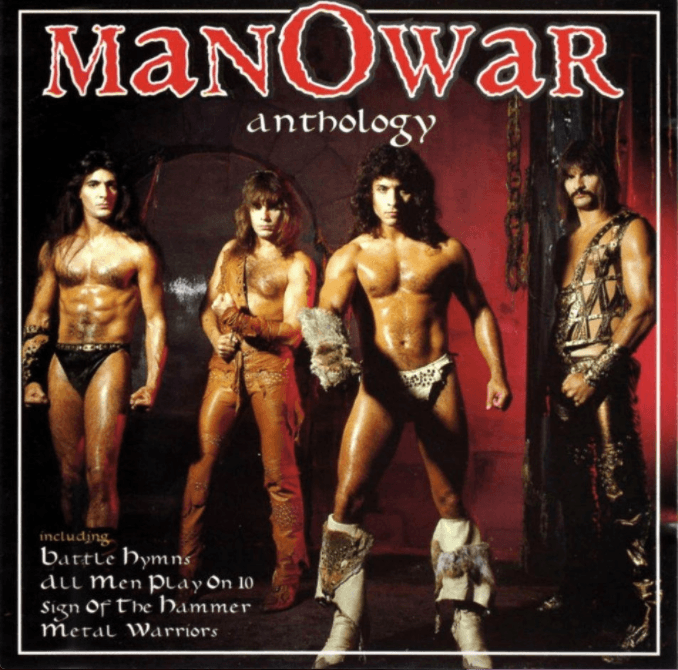 In many ways, an album’s artwork is the perfect opportunity to entrance curious eyes and create an aesthetic that symbolizes the music. For some fans, the first impressions they have of an album come from its artwork. That front jacket can be the difference between gaining a new fan or disenchanting them for life. Sometimes, bands get it right. And other times, they get it so so very wrong.

Music history is rich with horrible album art, ranging from the ugly to the offensive to the purely surreal. Terrible artwork isn’t limited to novelty bands either. Some of the most critically beloved groups featured regrettable art, and more niche artists have experienced new life thanks to the pure absurdity of their artwork.

Here are 25 of the absolute worst album covers of all time, encompassing obscure and celebrated bands who risked their reputations for the sake of truly questionable art.

Ken Snyder is the poster child for ridiculous album covers. Fans trolling for absurd album art brought the soft-spoken singer-songwriter to life and By Request Only has since become a cult classic. Sadly for Snyder, it’s doubtful that most fans listened to his soulful album in full, never making it past his mustachioed gaze. 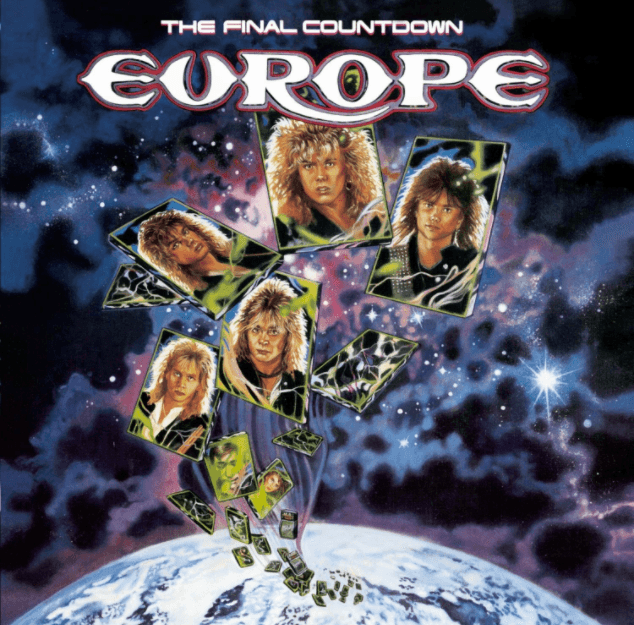 The actual song “The Final Countdown” epitomizes the glorious excess and glittery kitsch of glam rock. Naturally, it only makes sense that the album’s cover achieves the same effect. The big-haired rockers are towering in space along with their arena-ready synthesized anthems.

Up At The Crack by Boned | Current Records

There’s certainly a history of phallic suggestion in art around the world, but none with as little class as Up at the Crack. One can only wonder who thought it was a good idea to have a guitar neck blatantly protruding from white-washed denim. The grossly machismo cover syncs up perfectly with Boned’s tasteless AC/DC-styled rock.

4. Sparks – Pulling Rabbits Out of a Hat 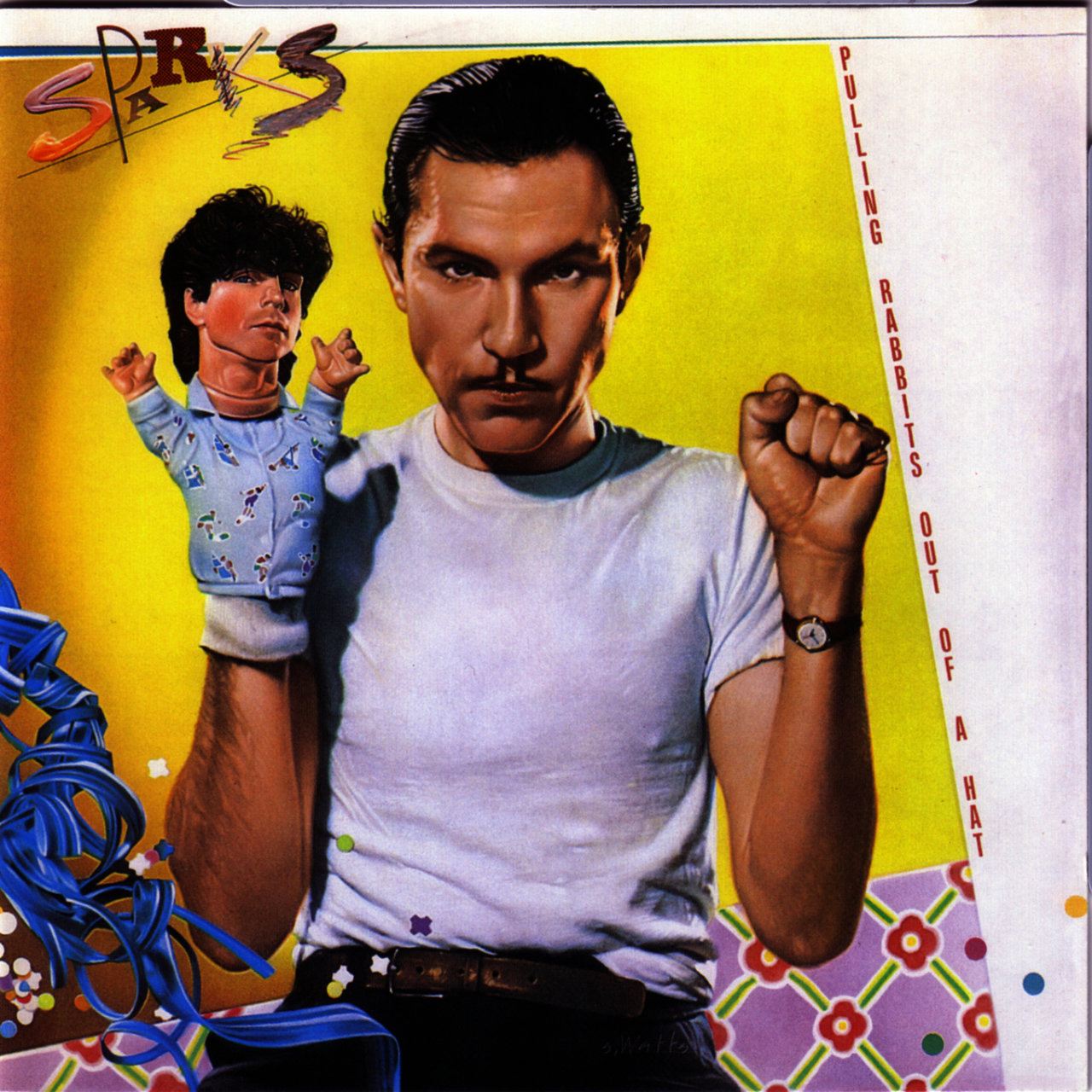 Pulling Rabbits Out of A Hat by Sparks | Oglio Records

The synth-pop duo Sparks were true innovators on the keyboards. Their music sported larger-than-life synth crescendos with bombastic dance beats reminiscent of Daft Punk. The pair often opted to craft an aesthetic that matched the heavy-handed bliss of their music. Pulling Rabbits Out of a Hat is undoubtedly the most egregious example of that aesthetic. 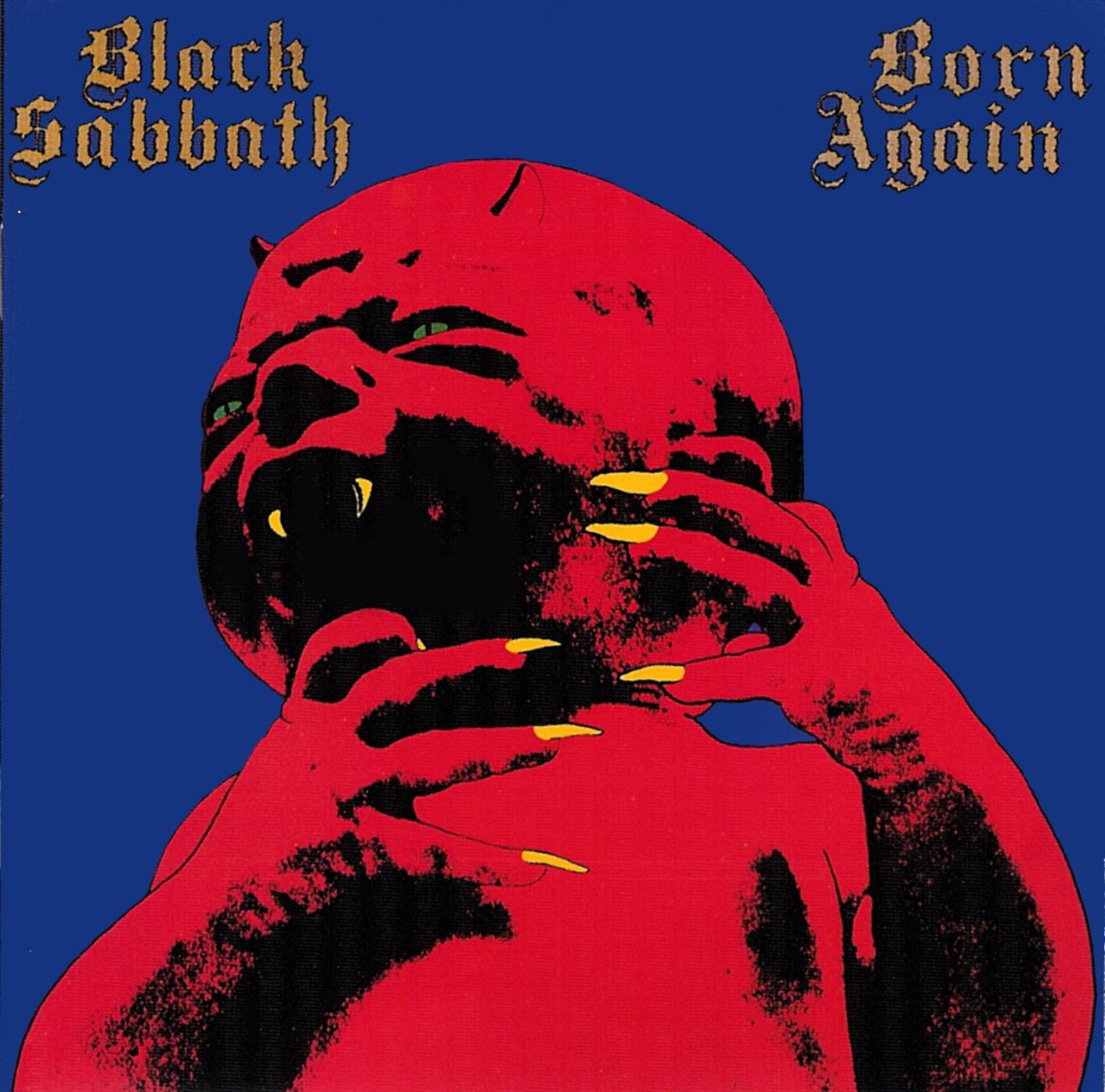 In Black Sabbath, Ozzy Osbourne’s lyrics often deviated into the realm of fantasy, offering a Gothic spin on Tolkien-esque imagery. While Osbourne has a penchant for the demented, none of his lyrics could top the nightmarishness of the Born Again cover. 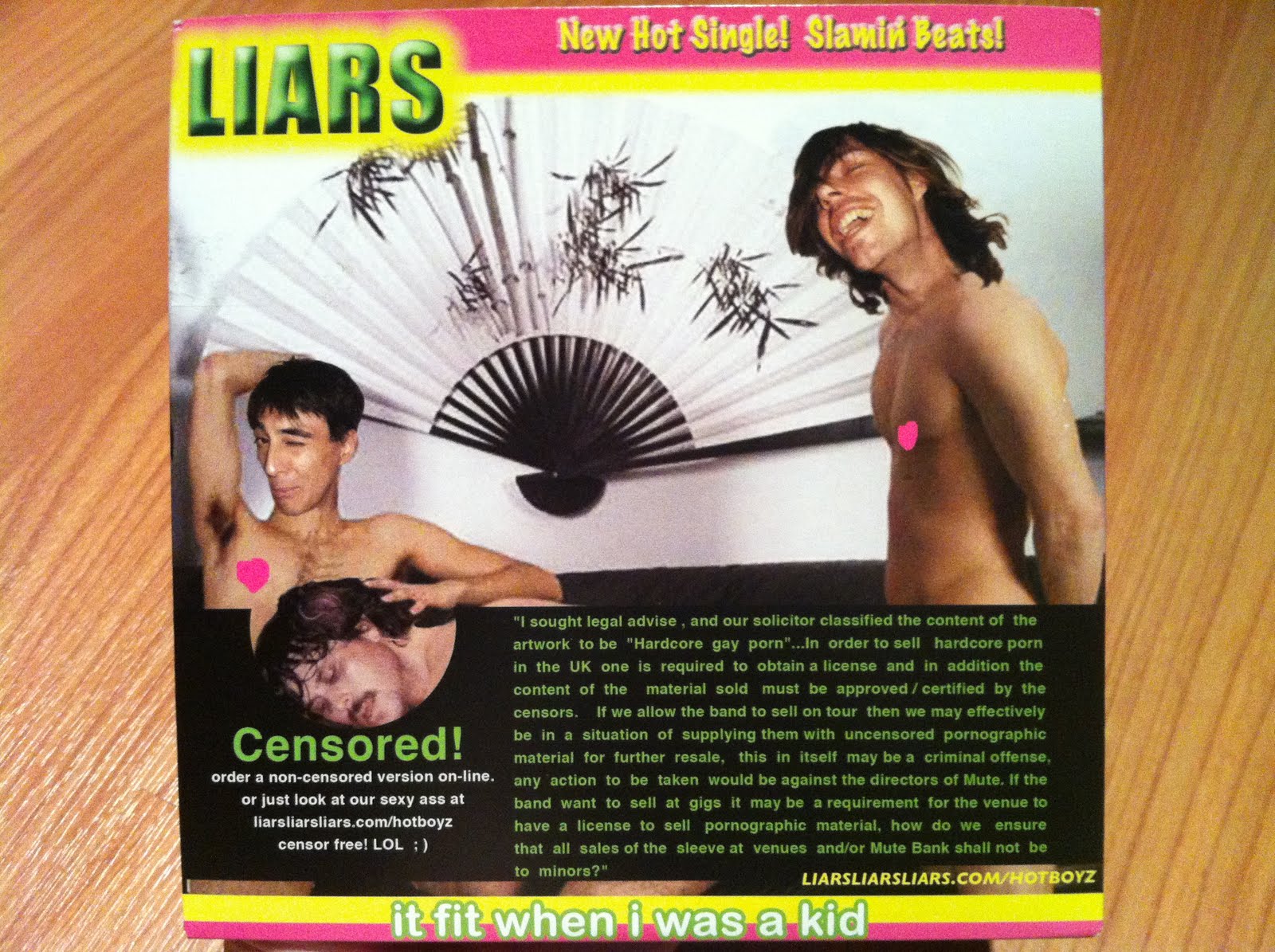 It Fit When I Was A Kid by Liars | Mute Records

Even though the cover to It Fit When I Was A Kid is an obvious joke, it’s weirdly perverse nature evokes more horror than comedy. Liars create dark and danceable music inspired by bass-heavy post-punk favorites like Joy Division. The group’s gloomy aesthetic makes for an especially strange counterpoint to the album cover. 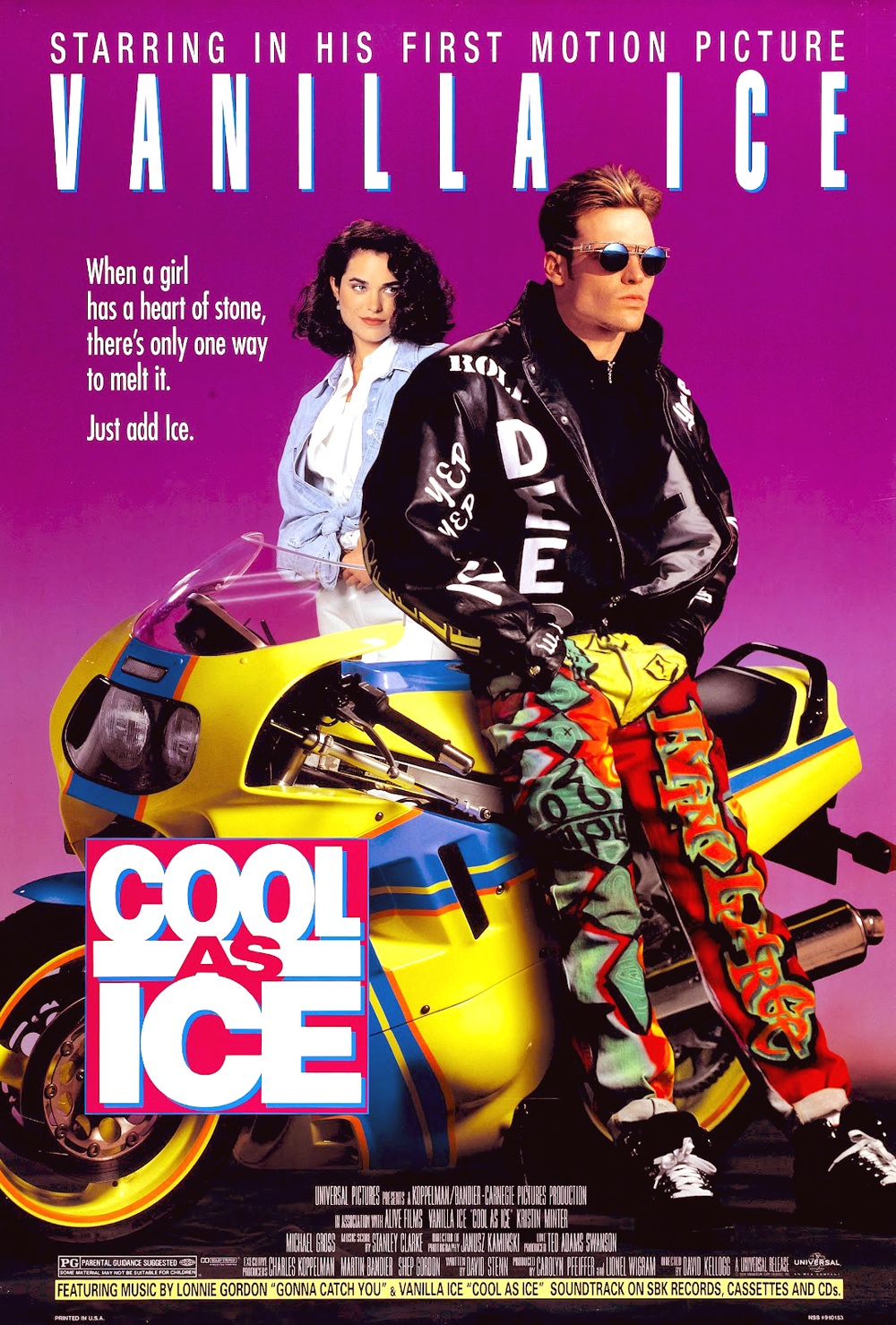 This one isn’t technically album artwork, but the idea of a movie called Cool As Ice actually starring Vanilla Ice sounds too perfect to be reality. Thankfully the bad movies gods are merciful and Vanilla Ice’s first movie looks just as cheesy as you’d expect. Fans don’t need to look further than his brightly colored motorbike and zany pants to understand how beautifully terrible the soundtrack is. 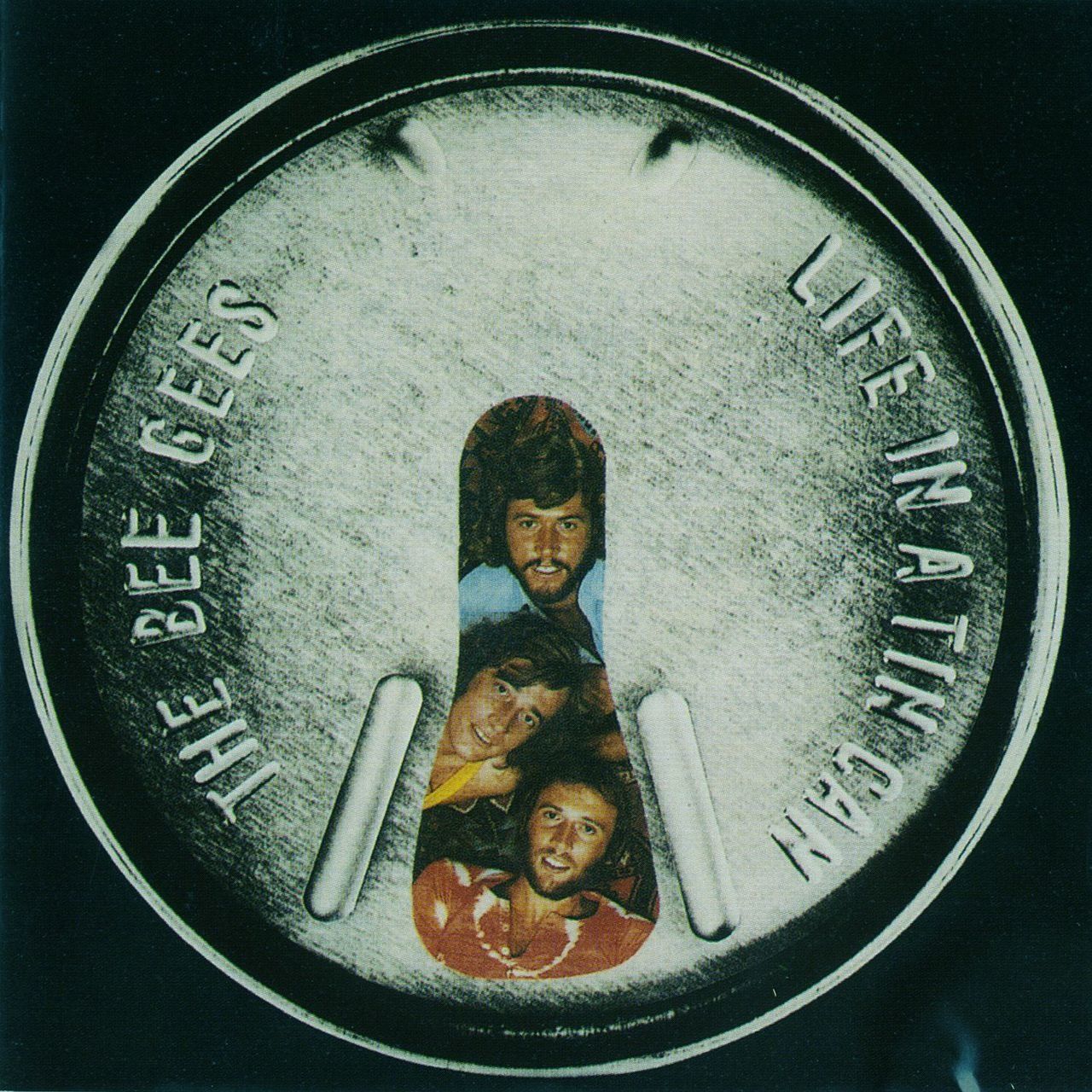 Life In A Tin Can by The Bee Gees| RSO Records

The music of The Bee Gees epitomizes the apex of disco, where frenzied adults donned extravagant bell bottoms on the dance floor. However, the inside of a can is arguably the last locale that one would associate with the group. Hopefully no one ever opens a can of green beans or spinach only to find outrageously dressed disco stars gazing up into the light. 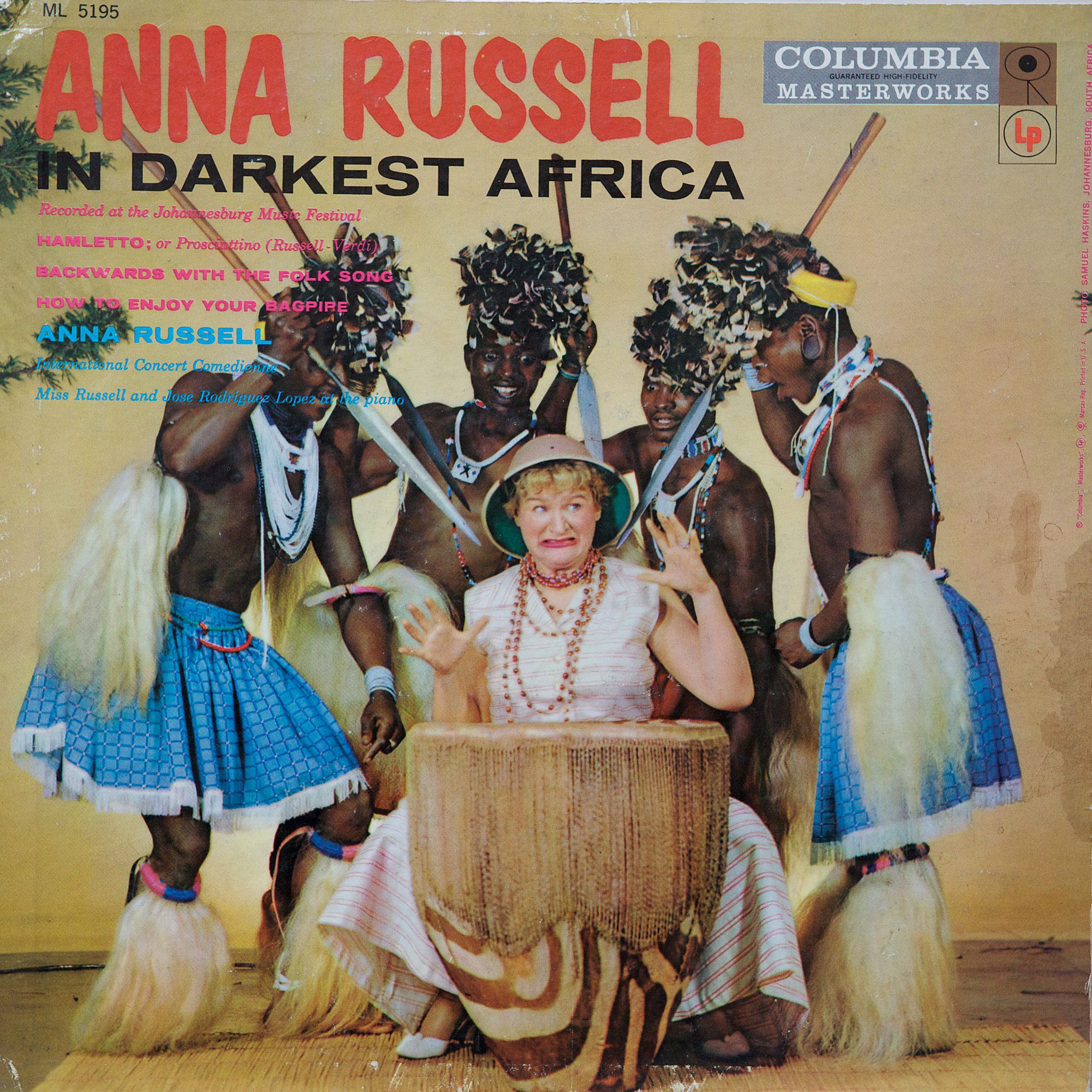 In today’s age it seems insane that there was ever a time when a cover like Anna Russel’s In Darkest Africa was appropriate. The singer and humorist was known for her whimsical sense of humor, but the album art bypasses the whimsy and goes straight for racist caricature. Critics at the time overlooked the cover and Russel went on to perform on prestigious stages such as Carnegie Hall. 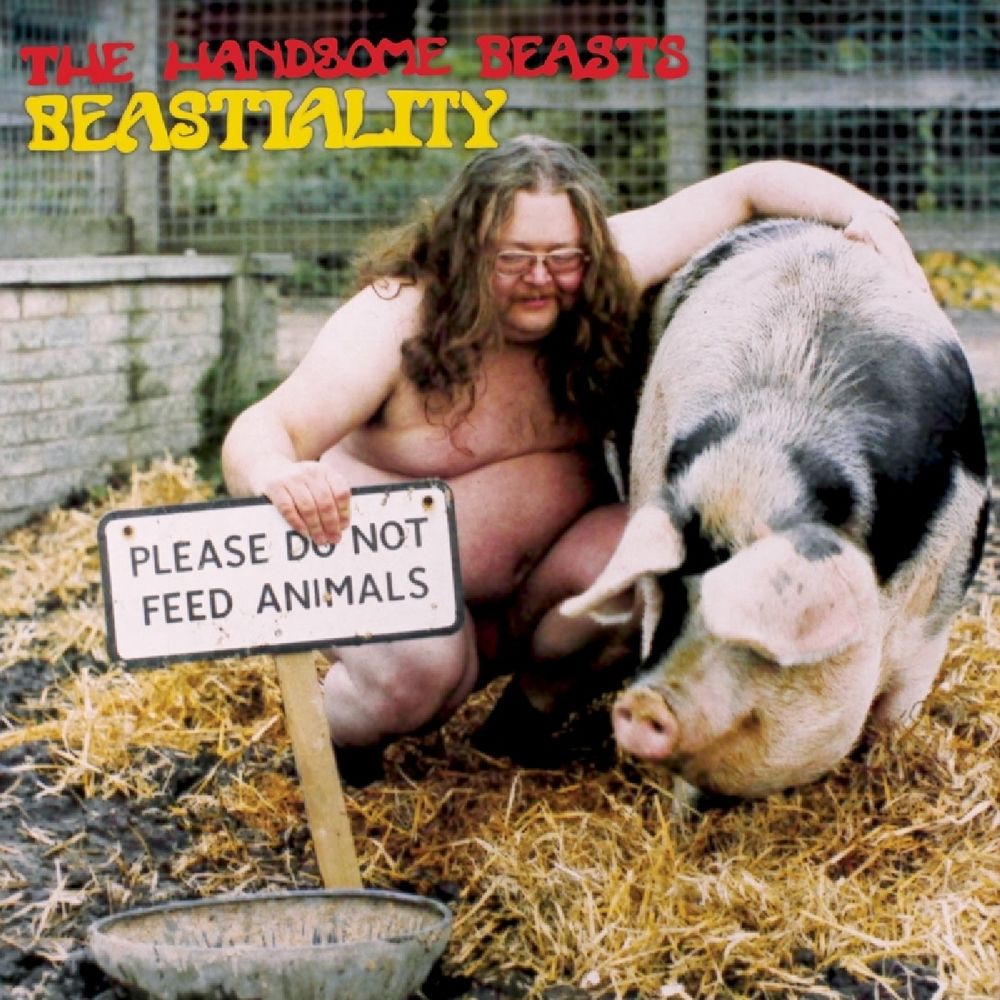 Many musicians can often suffer from a lack of humor. While there’s nothing wrong with a solidly placed pun or two, The Handsome Beasts completely missed the mark. The cover is off-putting and disgusting enough to make even the most seasoned metal heads pass up Beastiality‘s unabashed vulgarity. 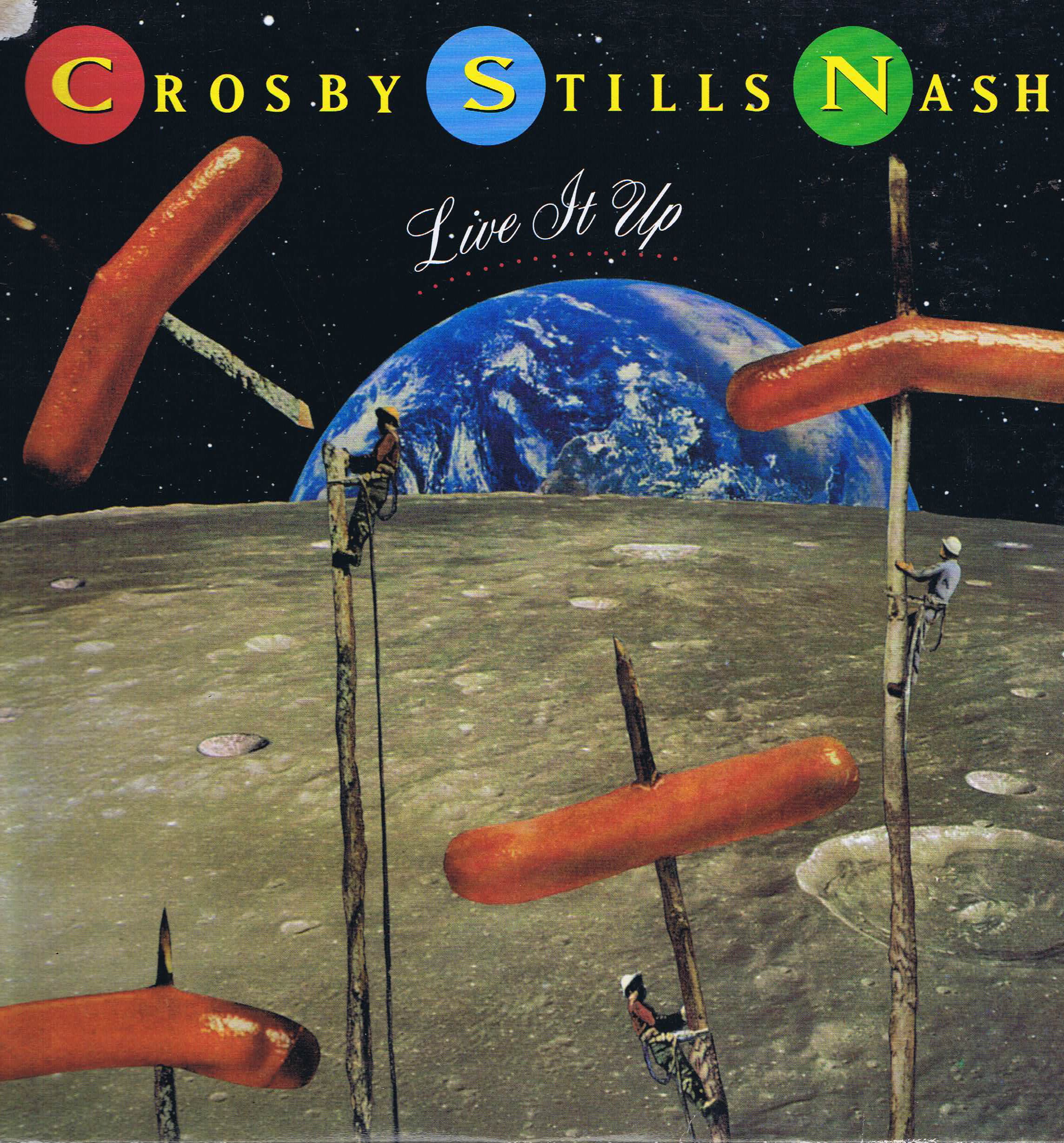 Live It Up by Crosby, Stills, and Nash | Atlantic Records

Live It Up was the only Crosby, Stills, and Nash album that failed to achieve platinum or gold status on the charts. Even if you didn’t witness the bizarre spacemen climbing up hot dogs on the moon, the album’s musical content was equally strange. The group made a name for itself off of political folk music and Live It Up was a far cry from the sound that made it famous. 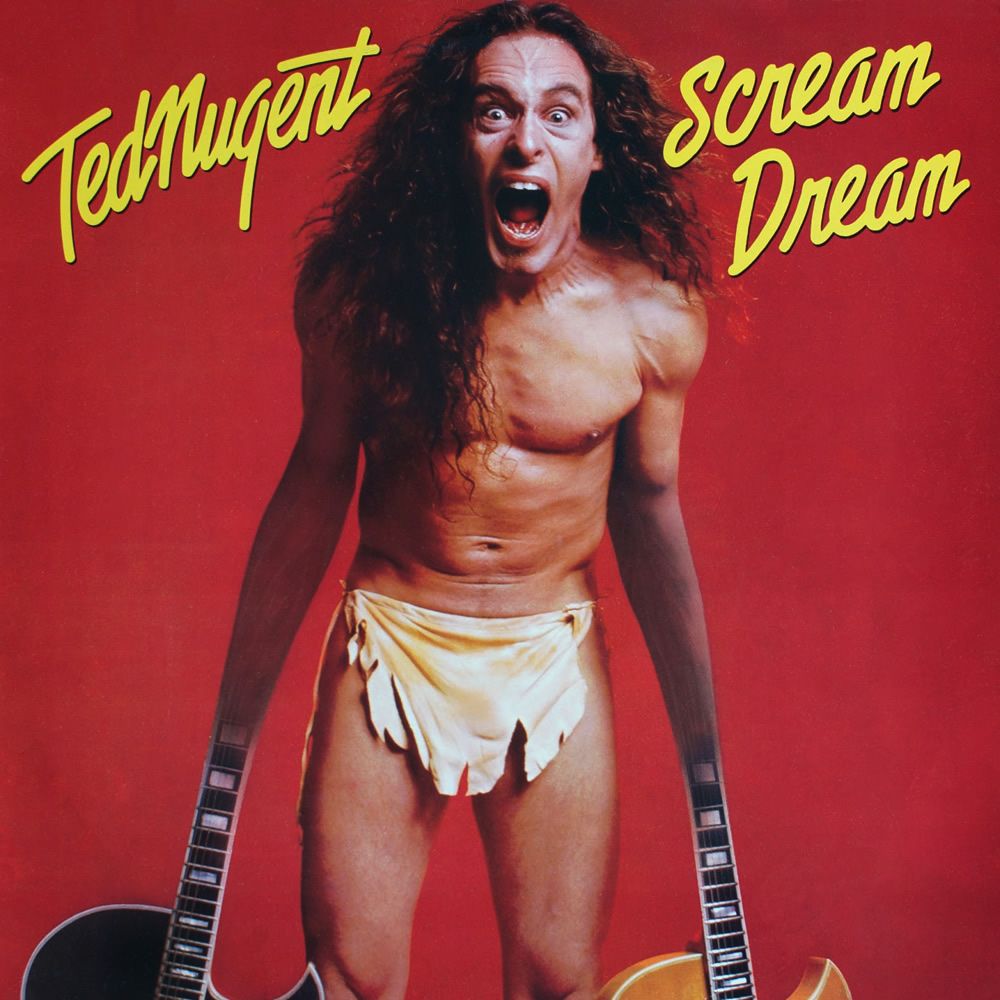 Ted Nugent was never a musician known for his subtlety. His ear-piercing guitar solos were made to rattle stadiums and top the charts. On the cover of Scream Dream, Nugent apparently feels so close to his music that he’s somehow fused with guitars, while wearing a loincloth for no discernible reason.

13. The Louvin Brothers – Satan is Real 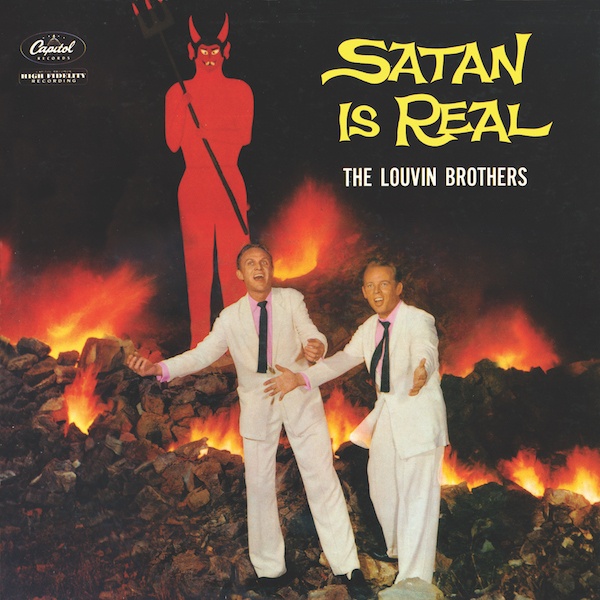 Satan Is Real by The Louvin Brothers | Capitol Records Nashville

The Louvin Brothers made waves in the country music scene during the 1950s. Like most folk music of the time, Christianity strongly informed the Louvin Brothers and the pair rarely wrote non-secular tunes. Satan is Real is one of their most blatant fire-and-brimstone records, as evidenced by the terrifying plywood depiction of Satan looming over the quirky brothers. 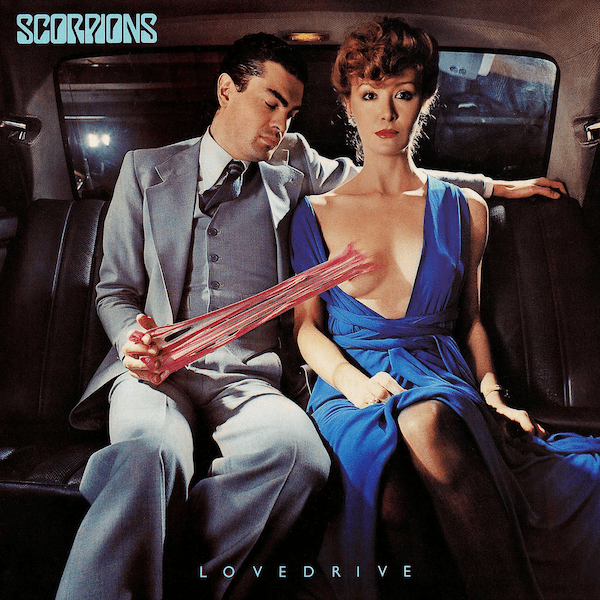 There’s something about glam rock that breeds absurdity. Maybe it’s the huge hair, maybe it’s the unabashed embrace of drugs and sex, or maybe the mammoth guitar solos. German heavy metal band Scorpions practically invented that formula, and incorporated it into its aesthetic — especially on Lovedrive. The cover was so controversial that many stores in America refused to sell it, though it has since been restored in subsequent reissues.

Manowar is a band that doesn’t particularly care about looking ridiculous. The heavy metal legends wear fantasy kitsch on their leather armor, most notably on the cover of Anthology, where the burly men bear more similarities to warriors then rock musicians. 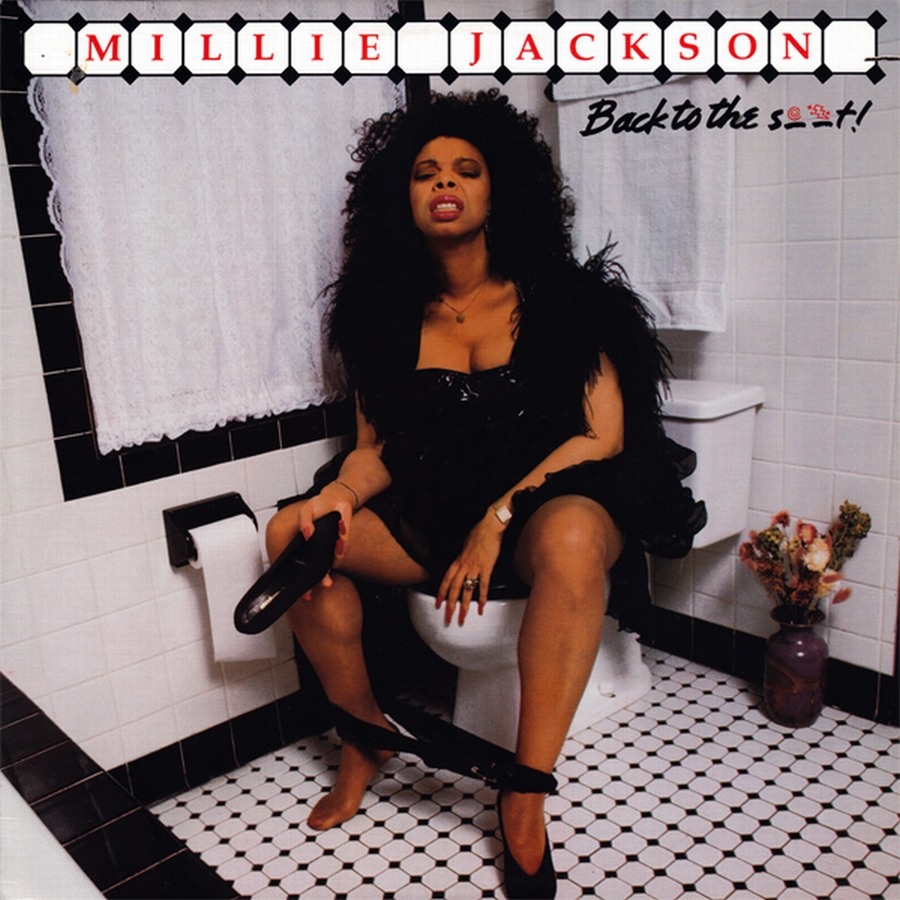 Back to the S**t! by Millie Jackson | Jive Records

R&B singer Millie Jackson never shied away from the strange and crude. Many of her songs tied disco to toilet humor, finding a strange middle ground between dance floor grooves and shock comedy. The cover of Back to the S**t! relies solely on the latter as Jackson shows no fear in exposing her more, uh, vulnerable side. 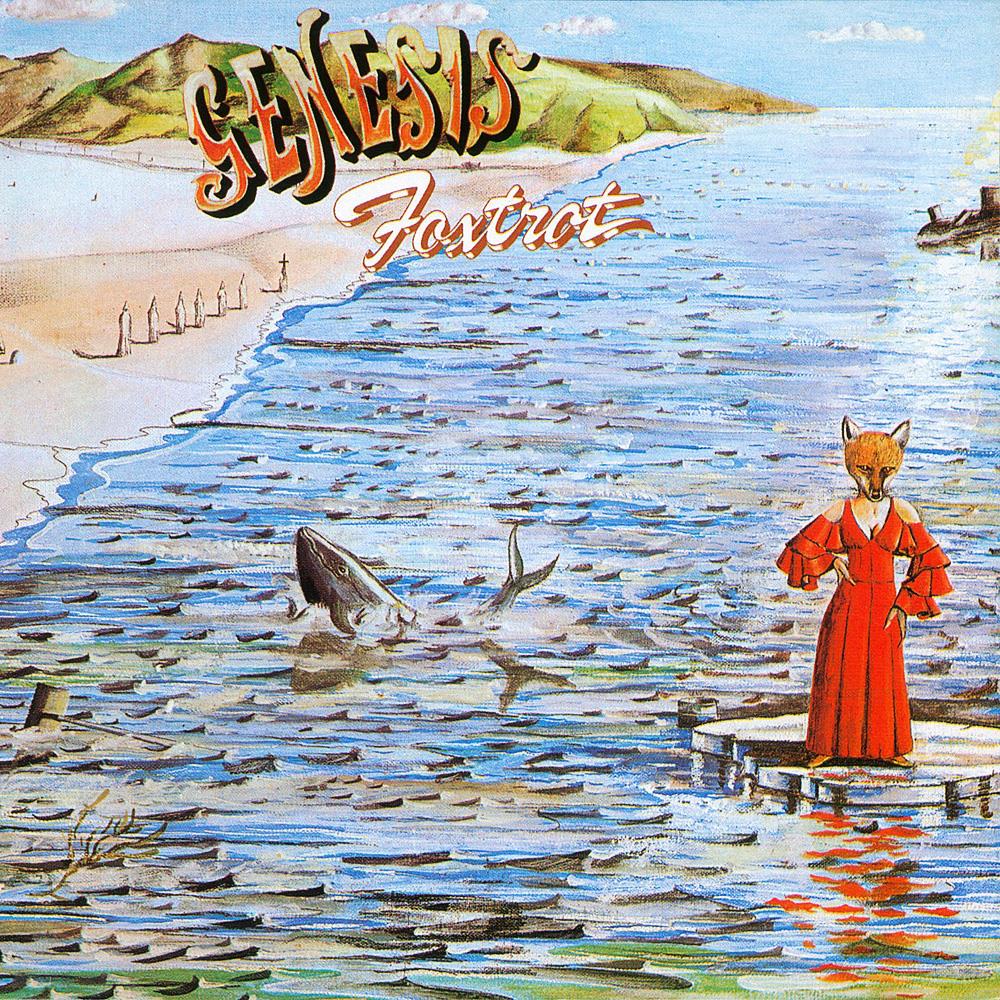 You could stare at the cover of Foxtrot for days and still have no idea what exactly is going on. Even for a legendary progressive rock band like Genesis, the strange combination of a dressed up fox-woman floating near a huge fish makes little sense. Thankfully, the cover didn’t distract fans from listening to one of Genesis’ greatest records. 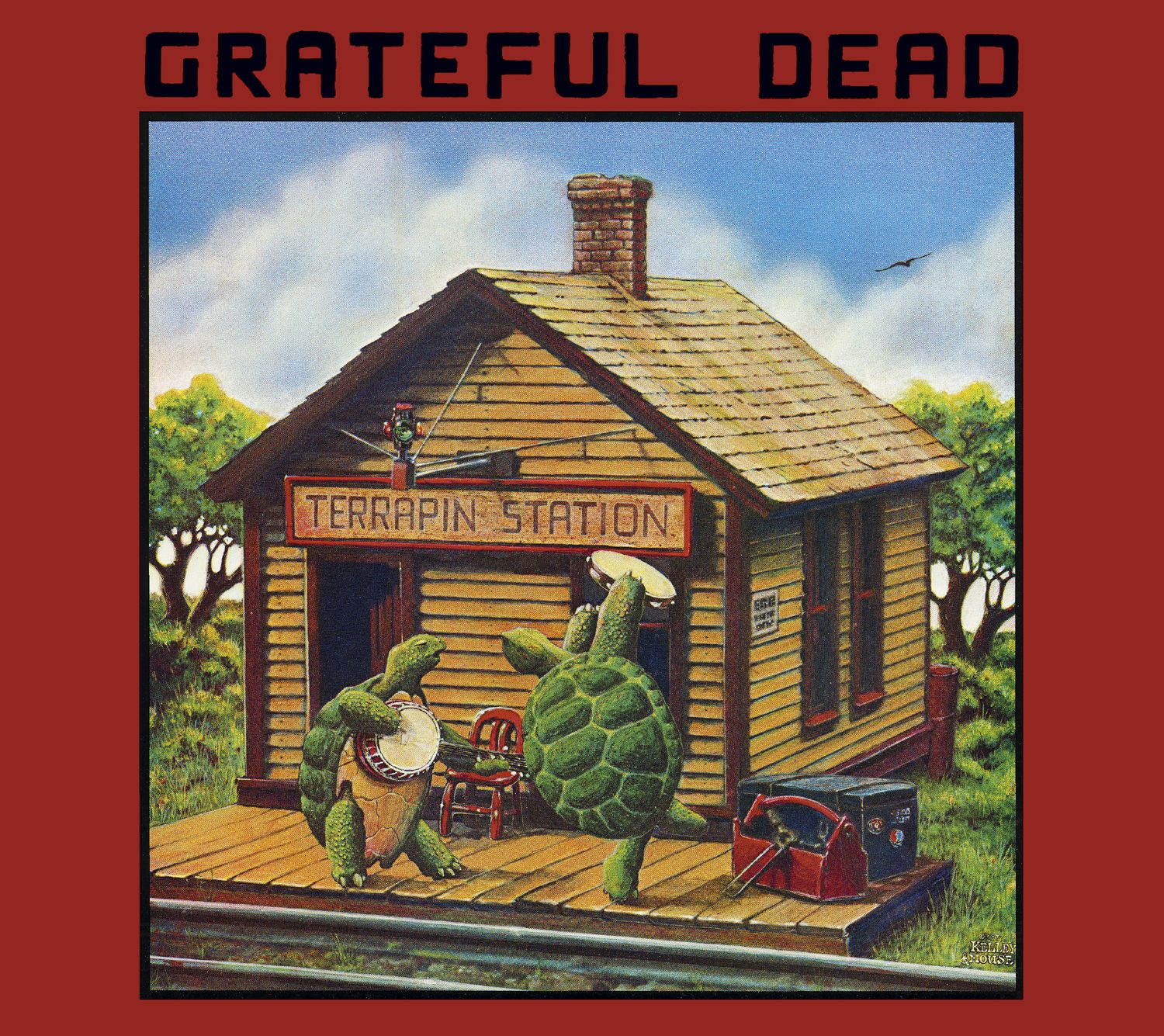 The Grateful Dead inspired a generation of flower children and created an array of icons to symbolize the hippie creed. Dancing turtles aren’t quite as memorable as the classic Dead skull, but they remain a key emblem in the band’s history. The turtles seem like some kind of cartoon nightmare on Terrapin Station as they jam out on a tambourine and a banjo. 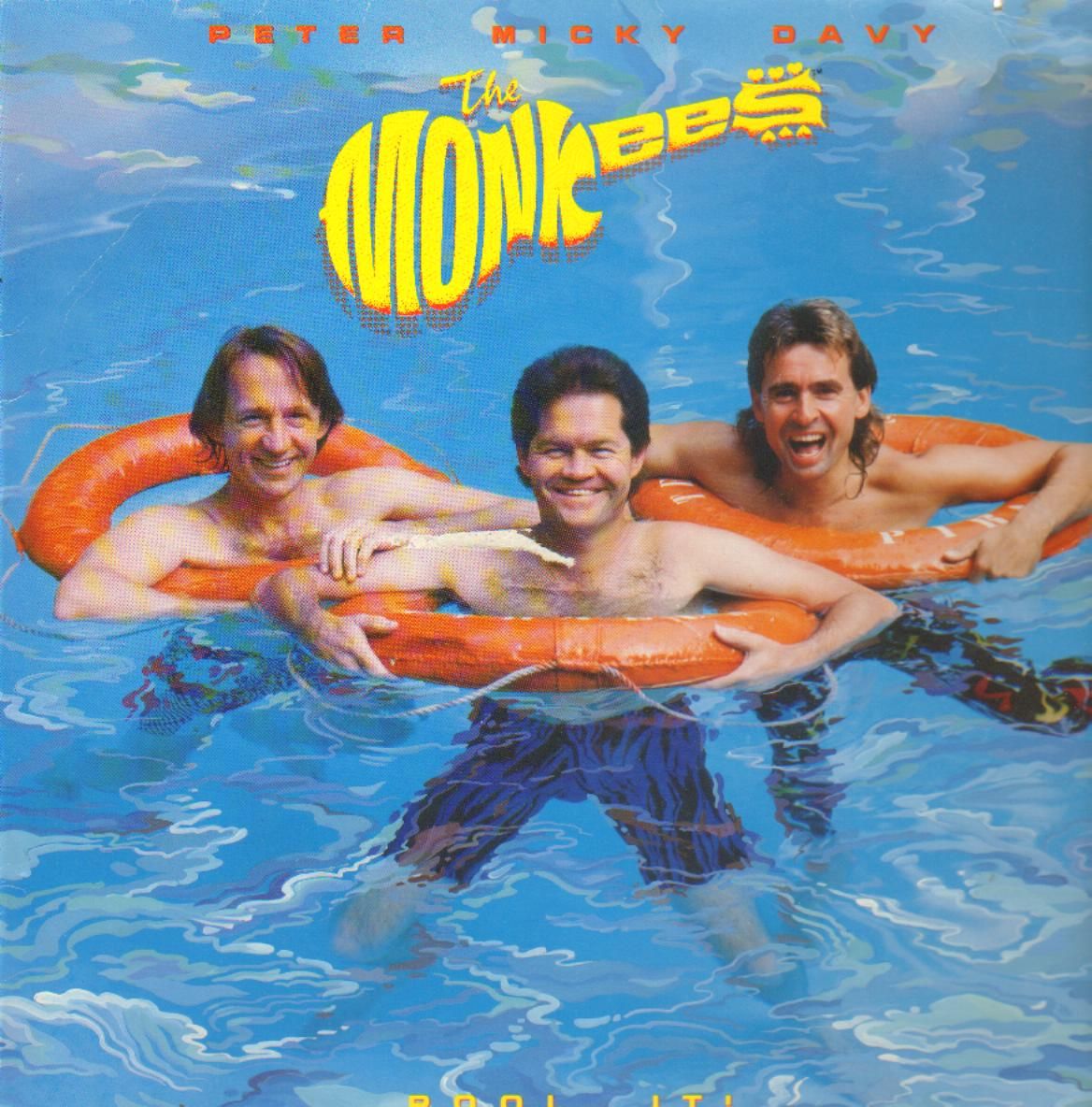 Pool It! by The Monkees | Rhino Entertainment

The Monkees had long since faded into obscurity in the 1980s, but the sun-kissed pop group trudged along anyways, returning with Pool It! in 1987. The cover really wanted to drive the good times home by featuring the band having, you guessed it, a pool party. The album ended up being a commercial flop, possibly due, in part, to the cringe-inducing pun of its title and cover. 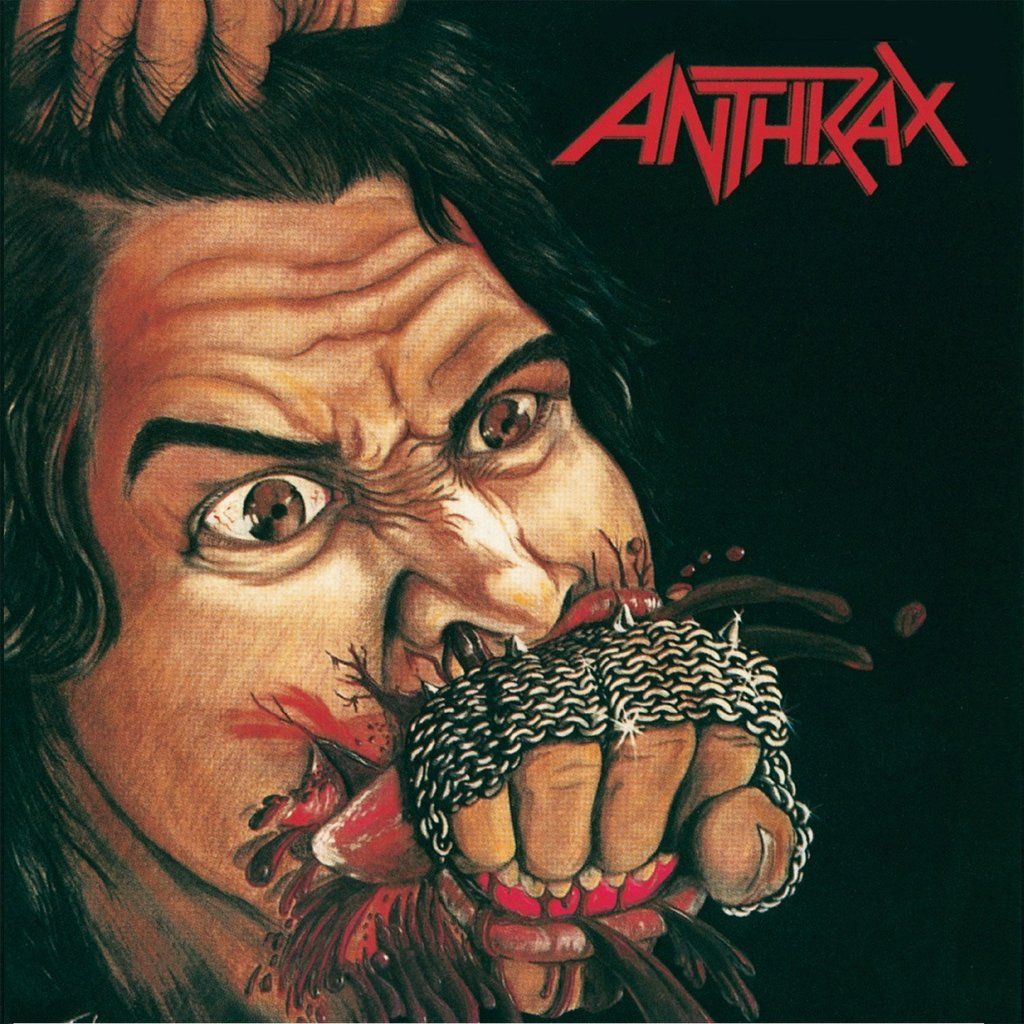 When Anthrax debuted, the storied metal band had not yet achieved its heroic status. Anthrax’s first album, Fistful of Metal, was largely ignored because the band had not discovered its own distinctive sound. However, the cover immediately stood out as it bravely attempted a literal interpretation of the album title. 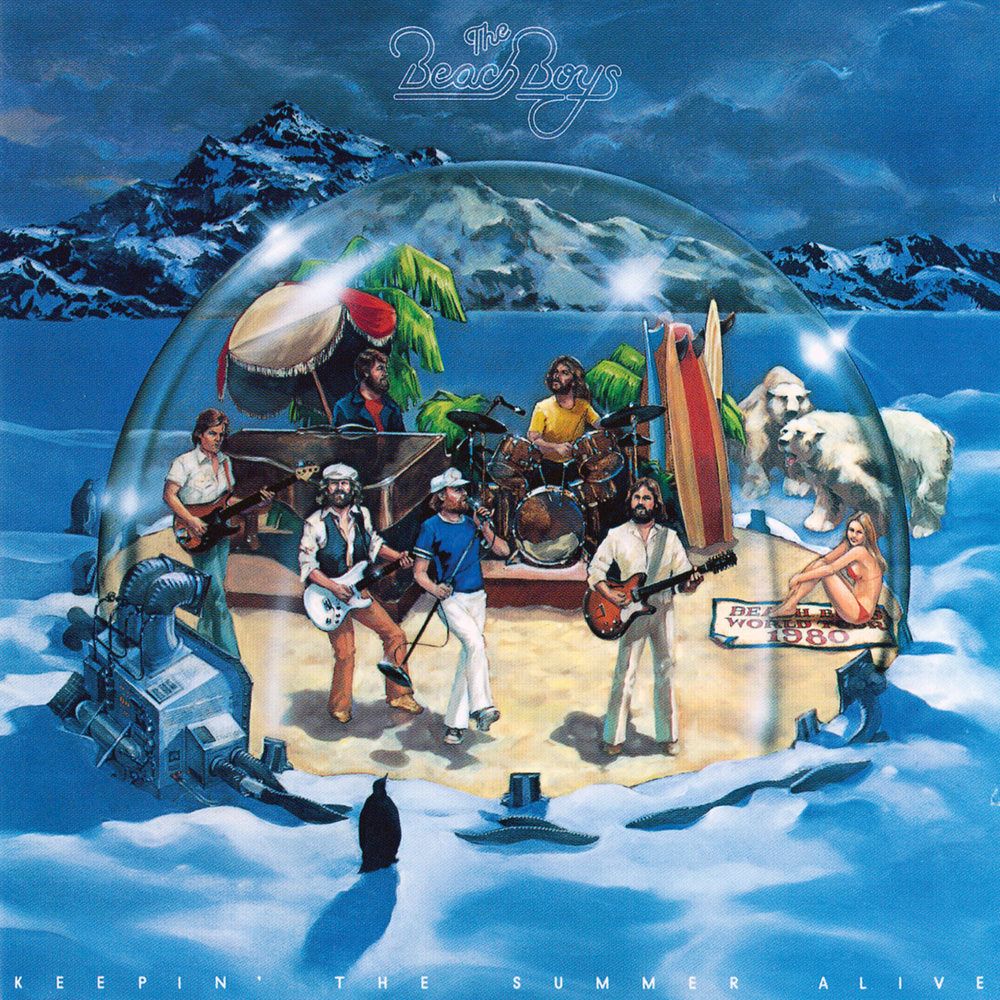 Keepin’ the Summer Alive by The Beach Boys | Capitol Records

By the time the Keepin’ the Summer Alive recording sessions started, The Beach Boys were considered vestiges of a bygone era. Instead of pushing into new territory, the psych-pop group retreated back into familiar imagery of white sands and palm trees. The album cover took a similar route, featuring the band in an encased dome as they appear to build a summery micro climate in the midst of an eternal winter. 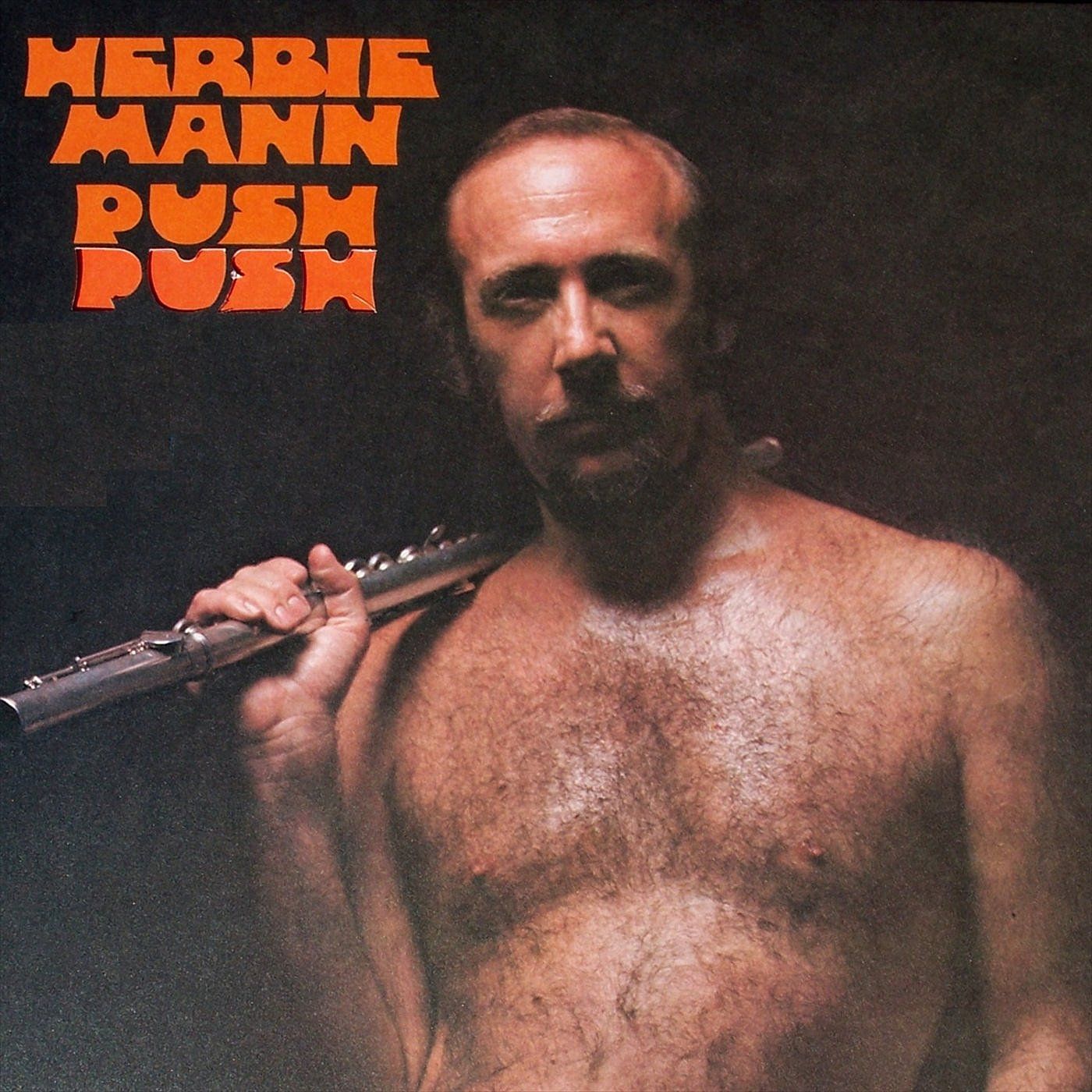 Most people generally don’t associate the jazz flute as a sex symbol, but Herbie Mann would disagree. On Push Push, he used smooth flute skills on R&B-styled tracks that fell in line with the seductive soul of the day. Rather than keeping the seduction in the tracks, he also attempted to entice listeners with his hairy chest on the album’s cover art.

23. REO Speedwagon – You Can Tune A Piano, but You Can’t Tuna Fish 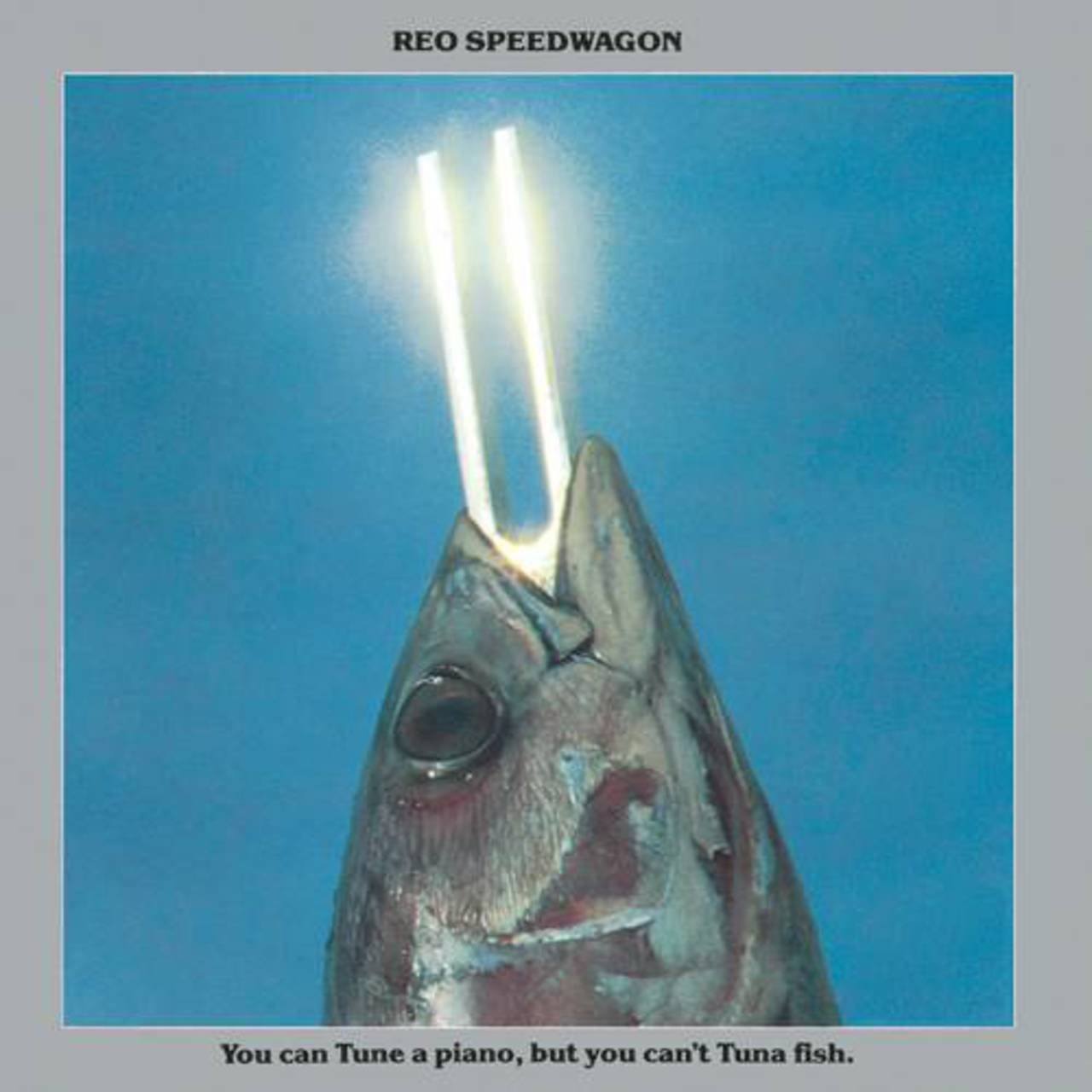 You Can Tune A Piano, But You Can’t Tuna Fish by REO Speedwagon | Epic Records

You Can Tune A Piano, but You Can’t Tuna Fish just sounds like a title thought up by a bored dad enamored with his own puns. Sadly, the pun was embraced by a best-selling rock group. As if the perplexing title wasn’t enough, REO Speedwagon felt it necessary to illustrate it on the cover, as a tuna fish appears to upchuck a tuning fork. Get it?

24. Scorpions – Fly to the Rainbow 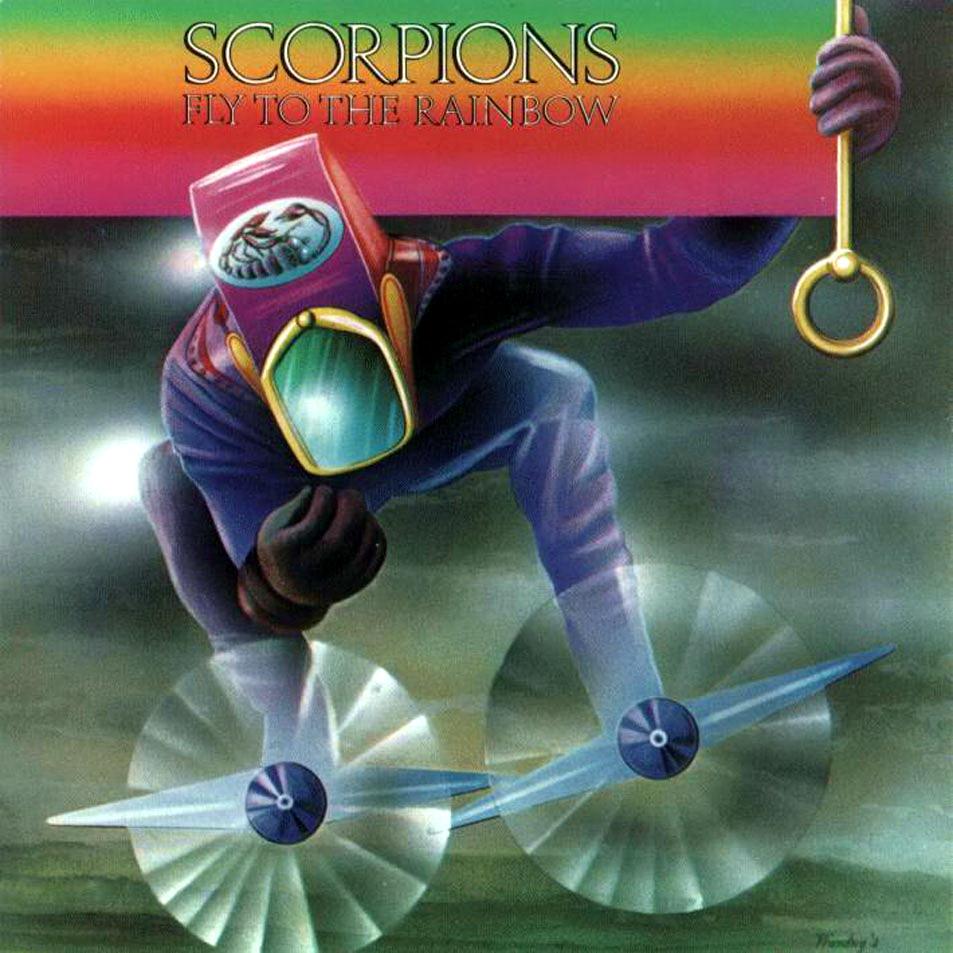 Fly to the Rainbow by Scorpions | RCA Victor

German metal giants Scorpions surrounded themselves in sexual imagery and depraved excess, but few fans remember they actually featured a rainbow on a cover. Entitled Fly to the Rainbow, the album art features a truly perplexing flying man pulling a rainbow across the cover. The symbolism, if there even is any, gets muddled by its nonsensical nature. 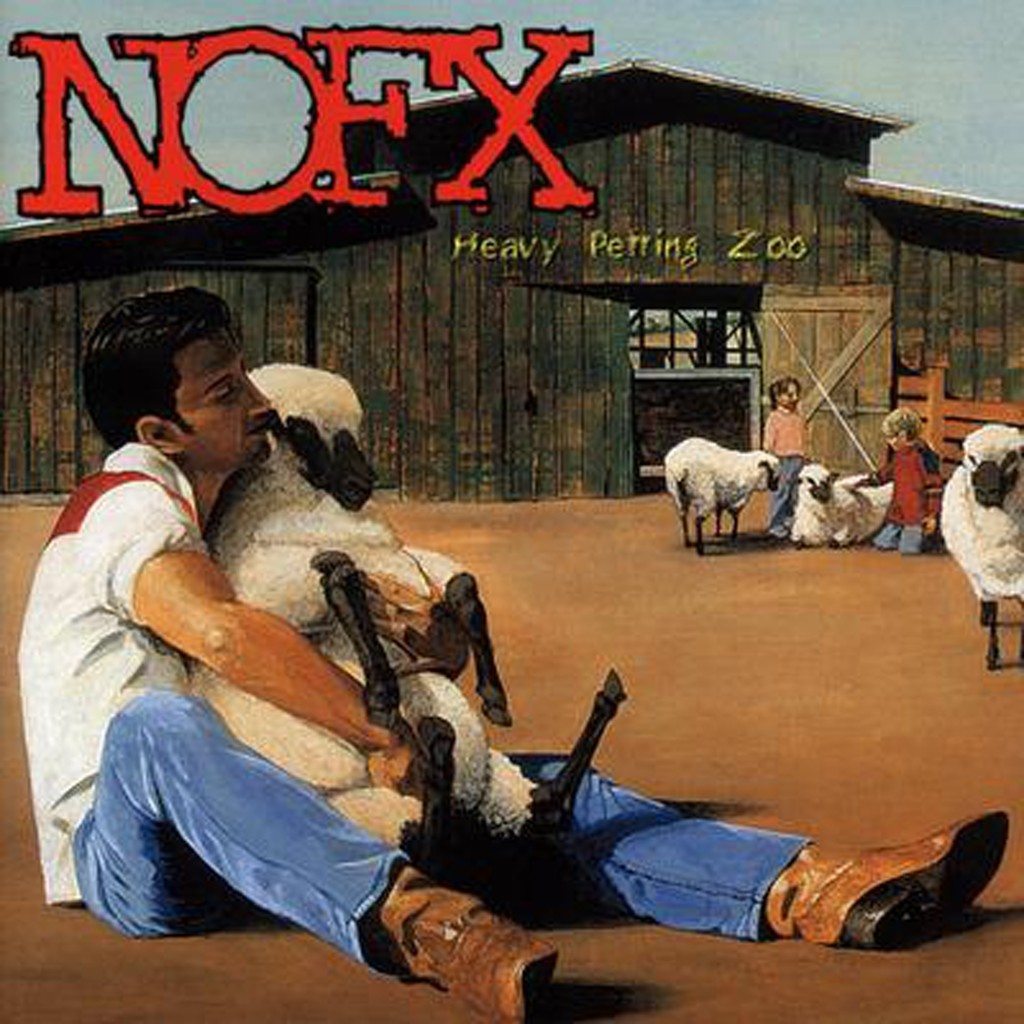 As if the nauseating pun wasn’t disgusting enough, NOFX had to make an album cover for Heavy Petting Zoo depicting its implications. The punk rockers always thrived on shock value, but this album artwork took it beyond shock and into the realm of depravity.

Check out more on the Cheat Sheet Entertainment Facebook.