32 Movies and TV Shows New to Netflix in December

Netflix has a whole new slew of movies and TV shows this month. Here are 32 new films and series that will be available for streaming in December.

Almost Famous, Available now
Directed by Cameron Crowe, this 2000 movie is set in the early 1970s and stars Patrick Fugit as teenage writer William Miller, who gets a plum assignment from a Rolling Stone editor to write about the band Stillwater on a cross-country tour. Along the way, he learns about friendship and love with help from Penny Lane (Kate Hudson). Though the movie wasn’t a big box office hit, it earned critical acclaim and received four Oscar nominations, with Crowe winning for Best Original Screenplay.

This 1999 drama stars Kevin Spacey as the suburbanite Lester Burnham, who falls into a midlife crisis while struggling with an unhappy marriage, unfulfilling job, and sullen teenage daughter; he ends up becoming infatuated with one of his daughter’s friends (Mena Suvari). Directed by Sam Mendes, the movie earned overwhelmingly positive reviews, eventually going on to win Best Picture, Best Director, Best Actor (for Spacey), Best Original Screenplay, and Best Cinematography at the Academy Awards.

The Wolf of Wall Street, December 11
Martin Scorcese’s 2013 high-rolling Wall Street drama is based on the memoirs of stockbroker Jordan Belfort, whose fast-paced career involved risky scams and confrontations with the FBI and other government agencies, and eventually landed him in federal prison. Leonardo DiCaprio stars as Belfort, while Jonah Hill and Margot Robbie co-star. The movie was nominated for five Academy Awards at the 2014 Oscars: Best Picture, Best Director for Scorsese, Best Adapted Screenplay for Terrence Winter, and Best Actor and Best Supporting Actor for DiCaprio and Hill, respectively, but the film did not win any. 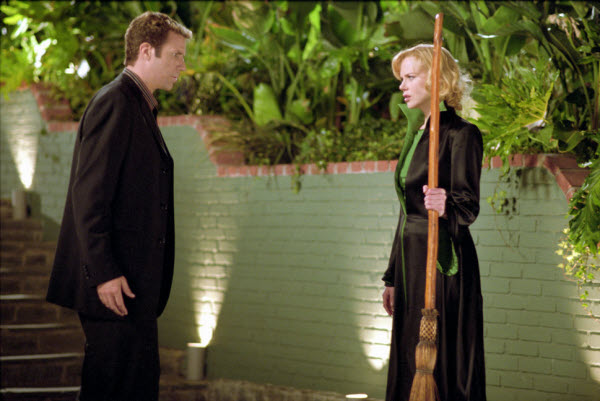 Bewitched, Available now
This 2005 Nora Ephron film stars Will Ferrell as washed-up actor Jack Wyatt, who stars in a film update of the 1960s sitcom Bewitched as an attempt to revive his career. When he spots Isabel Bigelow (Nicole Kidman) in a store, he convinces her to play Samantha to his Darrin in the remake. But Jack doesn’t know how right he is: Isabel really is a witch, and she’s just trying to live a normal life.

A Haunted House 2, December 10
Marlon Wayans returns in this 2014 spoofy sequel as the grieving Malcolm, who’s trying to move on after his girlfriend’s untimely tragic death. But when strange things start happening in his new home, Malcolm starts to believe his beloved is back from the dead.

Anchorman 2: The Legend Continues, December 6
The 2013 sequel follows the anachronistic Channel 4 news team, featuring newsman Ron Burgundy (Will Ferrell) and his co-anchor and wife, Veronica Corningstone (Christina Applegate), as they try to reassemble to join New York’s first 24-hour news channel now that the ’70s are over.

Romy and Michele’s High School Reunion, December 22
The 1997 comedy stars Lisa Kudrow and Mira Sorvina as two not-too-bright 28-year-olds who decide to reinvent themselves for their high school reunion, armed with a borrowed Jaguar, new clothes, and an invented story about their success as the inventors of Post-it notes. The movie spurred a television prequel film in 2005. 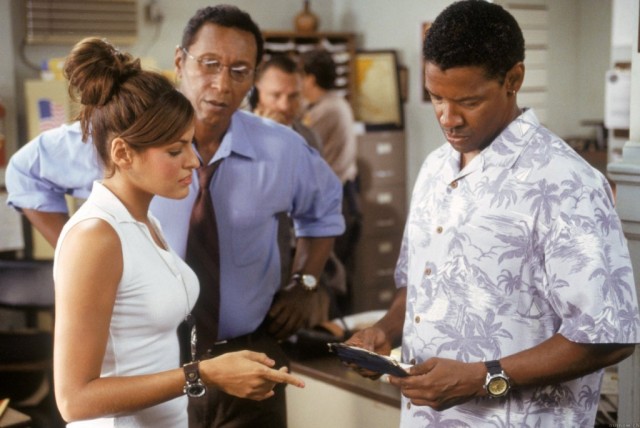 Out of Time, Available now
When a small Florida town is shocked by a double homicide, Chief of Police Matt Lee Whitlock (Denzel Washington) is forced to race against time to solve the case as he himself falls under suspicion. To uncover the truth, he’ll have to stay a few steps ahead of his own police force.

The Village, December 11
The 2004 psychological thriller follows a willful young man (Joaquin Phoenix) who tries to venture beyond his sequestered Pennsylvania town, not knowing his actions will inadvertently set off a chain of chilling incidents that will alter the community forever. Also featured in the star-studded ensemble cast are Bryce Dallas Howard, Adrien Brody, William Hurt, and Sigourney Weaver.

Dark Skies, December 22
Keri Russell and Josh Hamilton star in this 2013 thriller as a couple whose house is getting invaded by an alien that’s terrorizing their children each night. When their friends and neighbors refuse to believe what’s happening, they decide to take matters into their own hands.

Child of God, December 27
Directed and co-written by James Franco, the crime drama stars Scott Haze as Lester Ballard, who has lived a tough life, growing up parentless and then becoming homeless. Now, as a violent, antisocial adult, he is simultaneously shunned and pursued. He decides to retreat to a cave and descends into his own dark fantasies.

Good People, December 25
James Franco and Kate Hudson star in this 2014 drama thriller about a financially beleaguered couple who can’t believe their good fortune when they discover a boatload of money in the apartment of a neighbor who was recently murdered. However, the discovery soon takes them down a dangerous path.

I, Frankenstein, December 28
Many decades after his creation, Adam Frankenstein (Aaron Eckhart) is still hunted through modern city streets. The 2014 fantasy action film follows the monster running from pursuers, now opposing clans of demons who want to uncover the secret of his longevity and use it to sustain their own immortality.

Sharknado 2: The Second One, December 6
In the sequel to the social media sensation, a freak weather system turns its deadly fury on New York City, unleashing a Sharknado on the population and its most cherished, iconic sites — and only Fin (Ian Ziering) and April (Tara Reid) can save the Big Apple.

Don’t Blink, December 13
Ten people arrive at a secluded mountain resort to find it completely deserted. With no gas for the return trip, the visitors are forced to stay and investigate the mystery surrounding the abandoned lodge.

Jake Squared, December 15
When 50-year-old auteur Jake Klein (Elias Koteas) decides it’s time to make sense of his life, he throws a bash, hires an actor to play him, and starts filming. But things quickly spin out of control when unexpected guests — including younger versions of himself — appear and offer advice on how to fix his broken life.

Behaving Badly, December 28
The 2014 comedy stars Nat Wolff as Rick, a teenager so besotted with his crush Nina (Selena Gomez) that he has no qualms about facing off against a mobster’s son in order to get his chance to dating her. With two weeks to get her attention, the 16-year-old must face down a host of wild characters in this 2014 dark comedy.

Last Weekend, December 30
Patricia Clarkson stars as the well-heeled, fastidious Celia Green, the matriarch who rounds up her two grown sons and husband for a holiday weekend retreat at their beloved vacation home. Though she hopes to have the perfect vacation, things don’t go as planned, and unfortunately for Celia, discord and dysfunction ensue. 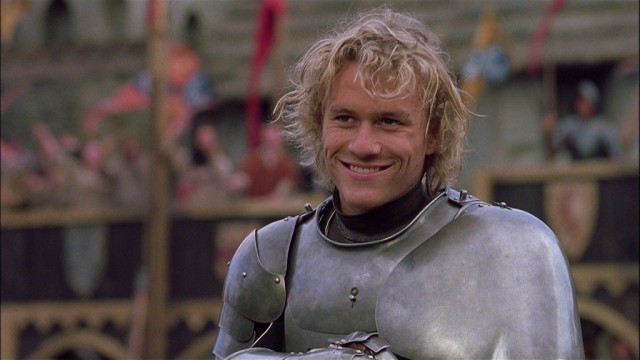 A Knight’s Tale, Available now
Heath Ledger stars in this 2001 medieval adventure film about squire William Thatcher, who befriends aspiring writer Geoffrey Chaucer and then persuades the scribe to forge documents that help William pass as a bona fide knight. He soon becomes a jousting star and finds romance with an admiring princess.

Madison, Available now
Based on a true story, this 2005 drama follows hydroplane boat racer Jim McCormick (Jim Caviezel) as he prepares for the 1971 Gold Cup championship, which is being hosted in the depressed river town of Madison, Indiana.

The Trip to Italy, December 23
Based on the 2010 British TV series The Trip, the 2014 feature film follows Steve Coogan and Rob Brydon as they trace the footsteps of the great romantic poets and traverse the Italian countryside while musing about life and love. Work enters the conversation as well in this largely improvised sequel to the roadtrip sitcom.

Labor Day, December 27
Based on Joyce Maynard’s 2009 novel of the same name, the 2013 drama stars Kate Winslet as a depressed single mom living in a rural home with her teenage son who gives a ride to an injured man (Josh Brolin). That act proves to be a life-changing event, as the man is soon revealed to be a convict.

Out of the Clear Blue Sky, Available now
Directed by a family member of one of the victims, this 2012 documentary tells the story of financial firm Cantor Fitzgerald in the aftermath of the September 11, 2001, terrorist attack, which took the lives of 658 of the company’s employees.

I Am Ali, December 9
Drawing from a collection of audiotapes recorded by Muhammad Ali as a personal journal, this 2014 documentary offers new perspectives on the legendary boxer’s life outside the ring. 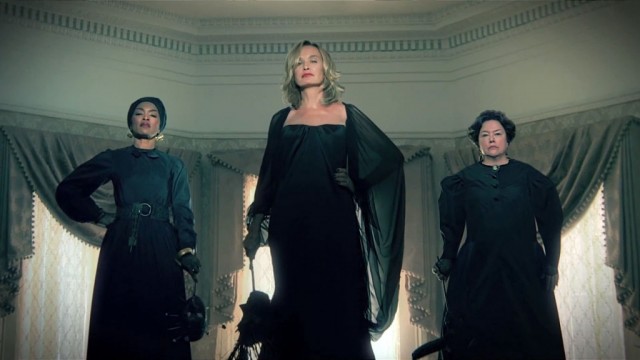 Anthony Bourdain: Parts Unknown, December 8
Season 3 of this CNN original series has chef Anthony Bourdain traveling to extraordinary locations around the globe to sample a variety of local cuisines.

Marco Polo, December 12
In another of Netflix’s original series, newcomer Lorenzo Richelmy plays the famed explorer. Set in a world of greed, betrayal, sexual intrigue, and rivalry, the series follows Marco Polo and his adventures in Kublai Khan’s court.

Broadchurch, December 12
After a young boy is murdered in the small seaside town of Broadchurch, local detectives Ellie Miller and Alec Hardy are assigned to the mysterious case. This British crime series follows the clues, obstacles, and red herrings that surface in the investigation.

The Honourable Woman, December 18
Maggie Gyllenhall stars in this BBC and Sundance TV political spy thriller as the newly ennobled Baroness Nessa Stein, who uses her fortune and intelligence to fight against government paranoia, espionage, and sibling treachery in her tireless efforts to reconcile the Israelis and Palestinians.

Comedy Bang! Bang!, December 28
Scott Aukerman brings the third season of his popular podcast “Comedy Bang! Bang!” to television. Scott writes and stars in the series along with his co-host, Reggie Watts, while featuring celebrity guests playing either themselves or other characters.

Jessie, December 28
Season 3 of the Disney show follows the adventures of Texas teen Jessie (Debbie Ryan), who moves to the Big Apple to follow her dreams. She finds a job as a nanny for a high-profile family with four high-energy children.