4 Reasons You Need To Be Watching USA’s ‘Mr. Robot’

The age of technology has seen some incredible advancements in the world of cinema and television. Even before it flew into full swing though, hacking became a mainstay in virtually every action movie where computers played even a small part. “Hack the mainframe!” became the battle cry for actors portraying geeks, typically dressed in glasses and a plaid shirt to clearly denote that this person is the one who’s good with computers. Things have evolved since then, with Hollywood making strides in their portrayal of what hacking really is.

Black Hat, for all its failings as a good movie, gave us one of the more realistic portrayals of real, actual hacking. On the other end of the spectrum, CSI: Cyber — whether intentionally or unintentionally — was almost a parody of the culture. This has left the door wide open on TV for someone to fill the void, and so Mr. Robot was born. Starring Rami Malek, it follows Elliot, a renegade hacker with a social disorder, working for a global conglomerate that he himself hates. Very quickly, it’s become the best show of its kind on an unlikely network in USA.

USA is a network less known for their deep, nuanced shows, and more for lighter offerings like Psych, Burn Notice, and White Collar. With Mr. Robot though, we see something that looks like it belongs on premium cable. It features a fair share of partial nudity, swearing, and content that’s decidedly not for a younger audience. The subject matter is gripping and dramatic, the characters multi-faceted, and the writing is stellar. The only real star-power can be found in Christian Slater’s role as the mysterious, titular hacker that finds Elliott, but that doesn’t stop it from feeling more like Dexter or True Detective.

2. It addresses one of the most prevalent problems in our modern society

Point blank, wealth inequality is the seminal issue of our generation. The Occupy Wall St. movement was merely the big flashing arrow pointing to the problem, and it hasn’t gone away since protesters packed up their tents and went home. Wall Street is still betting on the future of our country with money they have no business gambling with, a majority of our nation’s wealth still belongs to the upper 5% of our population, and it’s left many of us feeling helpless.

Mr. Robot charges in head-on, with our main character devoting much of his time to doling out digital justice to the corrupt and wealthy. The Robin Hood story may be an old one, but it’s become no less relevant as the years have gone on. This show shines a spotlight on an issue that deserves our complete and utter attention, in an entertaining and compelling arena of intrigue and storytelling.

3. You won’t find a more realistic portrayal of hacking anywhere else 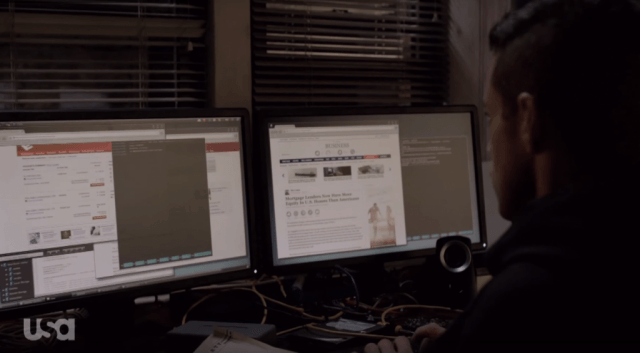 We’ve all seen it in movies before: An ace hacker needs to break into some secure government network. They say something like “I just need to get into the mainframe,” and a few light keystrokes later the deed is done. In real life though, it’s far more complex. It takes a high level of expertise, a lot of time, and more than simply breaking into the “mainframe.” Mr. Robot shows us just exactly how hard it is, while simultaneously outlining how simple it is to know someone in the social media age.

Much of the hacking in early episodes surrounds social media accounts and guessing passwords. No complicated backdoors, or Trojan viruses, just clever phishing scams to glean personal information from victims. A large majority of passwords are related to significant things and years in peoples’ lives, and aren’t a complicated alpha-numeric code. Mr. Robot demonstrates this firsthand, and in turn doles out the harsh realities of just how boring it can be.

4. Don’t believe us? Take everyone else’s word for it

From the pilot up until now, Mr. Robot has been universally lauded by critics and viewers alike. Rotten Tomatoes currently has it sitting pretty at a 97% positive rating for its first season, while MetaCritic gives it a similarly stellar 79. The folks over at Grantland had similarly praising thoughts on the show as well, helping round out a clear consensus that says one thing: You need to be watching this show.

Mr. Robot is genuinely exhilarating. Here, at last, is a show that doesn’t care one whit about our expectations or our skepticism. There’s no hand-holding, no patience. The series doesn’t begin so much as it explodes with an almost messianic confidence: a black screen, a voice inside our head calling us ‘friend’ and warning of slippery slopes, of conspiracies ‘bigger than all of us.’

The hype is real here, and there’s barely a critic out there that can refute this. Mr. Robot has been the surprise of summer television, bursting onto TV as a previously unheralded dark horse. Now, it’s quickly getting passed around among viewers as it continues to build steam. Will you join the revolution?