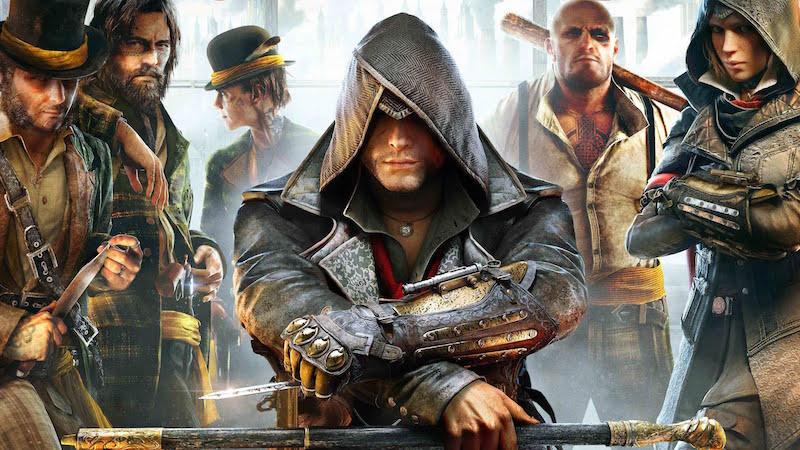 At work? Waiting room at the doctor’s office? Shopping with the significant other? Let’s face it: Sometimes you’d rather be gaming. For the occasions when you’re far from your controller or keyboard, there’s a whole world out there of other people playing games for you.

We’ve assembled a shortlist of the best new play-through and highlight content on the Internet, so you can get your fix even when you’re away from your precious console or PC. With videos from three minutes to three hours in length, there’s enough here to get you through a week of lunch breaks, or one really boring day. From a failed Star Wars Battlefront beta run to scare-filled horror play-throughs — and even a bit of trolling multiplayer fun — there’s something for everyone.

Assassin’s Creed has had some serious roller-coaster reception over its two-dozen-game arc, so you’d be justified in hesitating to pick this one up in the first few weeks. The series’ last few titles have been notoriously buggy, and updates came slow. But take a bit of comfort in the fact that the Achievement Hunter team at Rooster Teeth got an early look at the game courtesy of Ubisoft and really enjoyed it. The Victorian-era London sequel is replete with all the same stealthy, elegant, close-quarters kills. The guys love the combat system and spent the first hour frightening children and attempting to dispose of bodies in molten metal tanks. Hooray Industrial Revolution!

Horror-and-more Youtuber Markiplier has been uploading his play-though of Soma in easy-to-digest half-hour chunks since last week. Yes, this video has been out for a few days, but the final piece of the story isn’t out yet, so you’ve got time to catch up before he finishes (right now parts 1-10 are available). Soma is a sci-fi horror survival game from the makers of the Amnesia series. Your (Markiplier’s) character has to make his frightening way around an underwater research station collecting clues to figure out what happened and why everything is trying to kill you. An added benefit: Markiplier is (notoriously) easily scared. Enjoy.

3. Brownman streams Until Dawn, tries to save teens

Halloween is mere days away. To commemorate the occasion you should watch someone else freak the hell out over a horror game. Enter Twitch streamer Ray Narvaez Jr., aka Brownman, playing Until Dawn (horror game, mysterious evil, teenagers in a cabin, etc.). The game boasts dozens of possible endings, as every choice you make changes the potential outcomes. Ray plays through it blind, trying to keep the eight teenagers in question alive all the way to the end. The result is a perfect blend of cinematic horror cliches, hilariously jaded commentary (Ray is a former team member over at Achievement Hunter), and jump scares. Parts one and two together take up a few hours, but it saves you from playing the game yourself if you’re a bigger wuss than Ray.

Prop Hunt is a modded version of Team Fortress 2. Team one can take the form of any “prop” on the multiplayer map, and team two has to find the hidden adversaries and kill them before time and chances run out. Now that you understand the premise, enjoy watching Youtuber SeaNanners troll the absolute hell out of his poor friends, both in-game and verbally, as he seeks out every glitchy place to stash his prop. It’s a short video, but ‘Nanners has dozens of these if you want more, which begs the question: Why do any of these people put up with him in the first place?

5. “Will You Buy Battlefront? Yes.” and more from Funhaus

Did you miss the Star Wars Battlefront beta? So did the guys at Funhaus. Watch them play through the 2004 original release as part of the Dude Soup podcast, and bicker about whether or not the new game is worth buying. They also touch on how DLC season passes suck, whether you can skip them with the Star Wars game, and whether all our whining about having to pay more to get the rest of a game will actually change a studio’s mind, ever. In the meantime, they’ll kill some battle droids in the background. Maybe an innocent gonk droid as well. Even if the studio doesn’t drop the price of the expansion packs, they’re confident the game is worth it. Look at all the fun they’re having with a 10-year-old version.