5 Games With the Most Explosive, Ridiculous Action 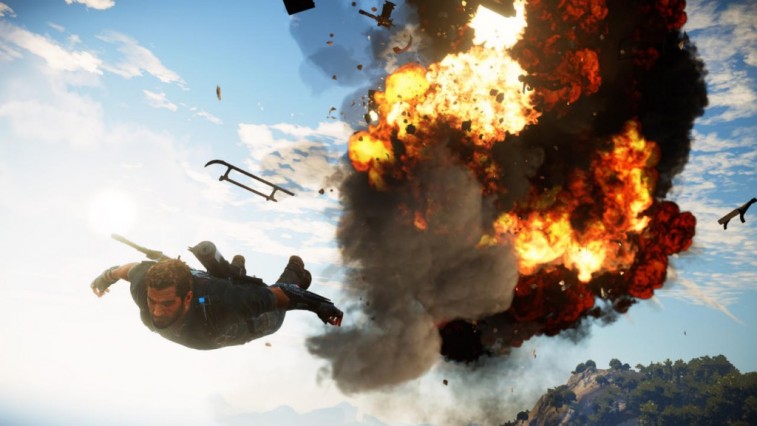 You can parade around lauding great games for their stories, music, and innovation, but sometimes you just want to blow stuff up. Whether it’s breaking sticks and throwing rocks into frozen ponds as kids or amassing whole armies of tanks and nukes as adults, we humans hold a certain primal curiosity with destruction.

For better or for worse, we have an aching question of “what if?” that can never quite be fully satisfied. You can always build bigger bombs and find even bigger things to blow up. Games are no different, in fact, they indulge us even more in our urge to annihilate things while sparring us the real world consequences.

May the god of explosions, Michael Bay, and the god of global cataclysms, Roland Emmerich, bless this list of five games that honors their taste for wanton destruction.

Since both Crackdown 1 & 2 are more or less the same game, you can cite crazy action to both experiences. Playing as a parkour-savvy super soldier Agent, Crackdown allows for complete autonomy of travel. You can climb, jump, grab, fly, drive, and swim your way to every location that needs purging of criminals in the fictional metropolis Pacific City.

When you’re not fulfilling missions, which you will be often, as the dreaded orb collection process takes up much of your time, you’ll be screwing around with the explosives at your disposal. Spend enough time creating a traffic jam, and you’ll have a prime opportunity to make it rain with cars, as seen in the video above. Jump online with some friends, and you’re able to concoct various catastrophes in tandem, all for the sake of each others laughter. Aah, the memories.

If Crackdown is your thing, keep an eye out for the third installment due in 2016, which will hopefully live up to its destructive potential.

Set in a fictionalized war-torn Venezuela, Mercenaries 2 does its very best to make things go boom as often as possible. No matter the story implications or paths you chose, in Mercs 2, every problem is solved with explosives. Though it isn’t celebrated for being the best game ever, it does benefit from universally destructive environments and buildings that give the game a great sandbox feeling overall. Throw in some tactical nukes and helicopters and you have a scenario Battlefield fans would drool over. Enemy over there? Blow him up. Building in your way? Blow it up. Another explosion already in your way? Blow that up, too.

Sadly, anyone hoping for another sequel free of the common glitches and bugs will have to wait indefinitely, as according to Kotaku, the studio Pandemic producing the third title was shut down by EA.

Everybody who’s played a GTA game knows the ritual you perform after every purchase of a new weapon: You try it out on the innocent populace gridlocked at an intersection. Every kill and mangled car gets a little bit of that misanthropic rage out of players, all at the expense of just some pixels and code. And let’s be honest, the citizens of the Grand Theft Auto universe tend to deserve some harsh treatment, as they love to taunt, torment, and berate players.

If you don’t want to get your digital hands dirty with the blood of “innocent” citizens, you can always round up some cars, legally or not, and create clusters of beautifully erratic explosions like in the video above. Just the sheer impact and kinetic energy of the physics are enough to make you want to throw every sticky bomb in your inventory to try and chain together as big of an explosion as you can.

One can hope for an eventual GTA that utilizes the more diverse destruction that other games on this list showcase, allowing for chain reactions to collide with buildings as well. Surely, some player out there would devise a plan to blow up the whole city in some intricate domino effect demolition.

Burnout’s hugely successful and loved crash mode, included in most of the games, tasks the player with a simple trial and error challenge to strategically place a high speed vehicle into as many lanes of cross and oncoming traffic as possible. The more damage done and financial costs increased, the better your score and placement.

The nice thing about the mode is the plentiful amount of levels and the innate satisfaction that most attempts breed upon completion. Unless you crash right away, far from the target area, you’re likely bound to cause some serious mayhem. Even if you do flub the first attack, there’s always the ever-useful “crashbreaker” mechanic that re-explodes your car so you can redirect it into traffic again. If you get real lucky you can wedge that sucker beneath a whole pile up, making the explosion far more damaging to the vehicles around you.

It’s always a comforting thought to be causing some fictional insurance worker to lose their mind over the claims: “You said what happened?!”

Just Cause 2 is sort of an amalgamation of all the other games on this list. You’ve got an open world, multiple weapons and gadgets, a highly volatile physics engine, and plenty of mountains to roll down. Things get real nutty when you use the grapple hook in conjunction with explosions and high speed vehicles. Watching people or vehicles boomerang around the object they’re attached to is simply hilarious.

If all this talk of explosions has whet your appetite, don’t fret, as Just Cause 3 is here, and it looks awesome. The sequel seems to be taking every element from this list and bringing it to the next level. There could be an infinite amount of concepts possible in such a creatively engaging world.