Every week we tap into Hollywood’s psyche, or give it our best shot, to give readers an in-depth look at the latest rumors, casting updates, and other entertainment beats of the sort. Everything you read has been incubating in the Hollywood world, and now it’s time to share it with you — Cheat Sheet readers. So, at long last, here is what has been pulsating throughout the web this week. 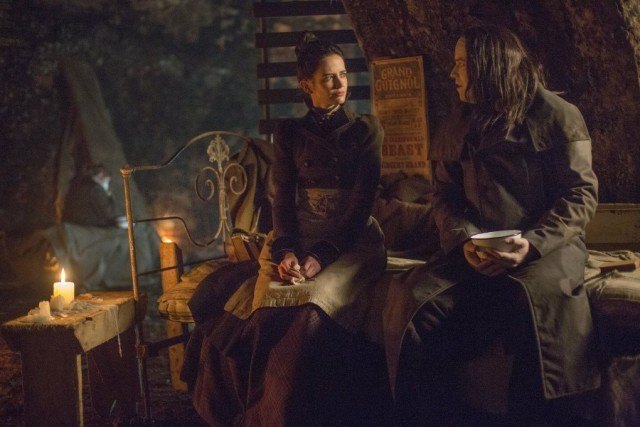 John Logan’s Penny Dreadful returned to Showtime this month with a much wider and loftier season. The core characters — who’ve been living in or around Sir Malcolm Murray’s (Timothy Dalton) upscale London residence — have spread out, to Africa and the American West. In the process, Vanessa Ives (Eva Green) is all alone in England, with Dracula (Christian Camargo) bearing down on her.

May 29 will bring the fifth episode of the season, and as each week passes, more Emmy buzz surrounds Eva Green. Earlier this year, Green was nominated for a Golden Globe for her work in Season 2. This year, something of a movement has been forming around Green, to get her nominated for an Emmy, arguably television’s most prestigious honor.

Last year the series picked up its first three nominations for creative arts categories of prosthetics and music. While it didn’t win any of those races, it placed a large foot in the door with a voting body reluctant to recognize horror and fantasy television till recently.

Benutty draws on the point that last year, Game of Thrones won a record 12 Emmy awards, helping to dispel the longstanding belief that “genre” shows — fantasy, horror, etc. — are incapable of being award winners.

The show is freshly competitive in categories honoring cinematography, costumes and hairstyling in addition to remaining a force in the prosthetic and music fields that it has already gained notice. Last year a fair amount of these categories showed love for Boardwalk Empire, Wolf Hall, and Mad Men, none of which are in play this year, leaving room for Penny Dreadful to make its move.

Patti LuPone, who appeared in Season 2 as a guest star — and earned a Critics’ Choice Award nomination — may also be in the running for an Emmy this year. Let’s see if the show, of romantic and shadowy England, can bust out and win a few awards.

2. Will Uncle Benjen return to Game of Thrones?

In Season 5 of Game of Thrones, showrunners David Benioff and D.B. Weiss teased a return of Jon Snow’s uncle, Benjen Stark (Joseph Mawle), which only resulted in the Lord Commander’s death. But perhaps the time has come for the former First Ranger to return. Sure, we haven’t seen Benjen since Season 1, when he left to go on a scouting mission, looking for wights. Only his horse returned to Castle Black, but it may very well be Benjen in the forest rescuing Bran (Issac Hempstead Wright) and Meera Reed (Ellie Kendrick).

Or, what is possibly more likely, Benjen has become the character Coldhands (as seen in George R.R. Martin’s novel), a mysterious, great elk-riding warrior who calls the Night’s Watch his brothers and helps Bran. Since there has been no reference to Coldhands in the show as of yet, Benioff and Weiss have a lot of creative freedom to do with him what they’d like (or keep him as a literary character only). Still, it’d be nice to see Mawle return to the show after such a long hiatus.

The following was written by Independent’s Jack Shepherd:

Could Coldhands be about to enter the show? The showrunners have so far ignored many undead characters, such as Lady Stoneheart, but with Jon Snow’s resurrection and more fantasy elements entering the fray, could an undead saviour be about to enter? Perhaps they will just ignore Coldhands altogether and just have Benjen enter as himself, without having become Coldhands?

3. What do we know about Christopher Nolan’s Dunkirk?

According to Beatrice Verhoeven of The Wrap, filming for Christopher Nolan’s World War II drama, Dunkirk, has begun. As of now the film is set to be released on July 21, 2017.

Photographer Pierre Volot took multiple pictures from set, using the hashtags #dunkirk and #dunkerque. In the photos, posted to his Twitter account, we see stacks of sandbags and robust scenery. Nolan wrote “Dunkirk,” which chronicles the WWII evacuation of Dunkirk during Operation Dynamo, the British military operation that saved the lives of 330,000 Allied soldiers who were surrounded by German forces. He’ll also produce the film with Emma Thomas.

4. New Stormtrooper revealed for Rogue One

IGN’s Seth G. Macy reported on Wednesday that a new Stormtrooper has been revealed as part of the art released for the upcoming Star Wars Celebration in London. He also writes that “a new type of AT-AT, the AT-ACT, was also revealed.” The AT-ACT, according to Macy, is an “all-terrain armored cargo transport.”

And, the only detail Macy notes is that the now-revealed “Shoretrooper” joins a “long list of Stormtroopers already in the official Star Wars canon.” He concludes by mentioning that the Star Wars Celebration will be in London July 15 to 17.

What’s more, Kleyman writes, “According to MTV, the sequel may be based on an alternate Jurassic Park 4 script that was penned by John Sayles.”

Apparently the central premise of the film would be about militarized dinosaurs capable of fighting crime and/or waging war. The seed for this idea was planted in Jurassic World as Vic Hoskins (Vincent D’Onofrio), who headed InGen’s security, pitched the idea of weaponized velociraptors. Main character Owen Grady (Chris Pratt), who was “one with the raptors,” vehemently opposed such an idea. Pratt has been cast again to play Owen. (Bryce Dallas Howard, who played run-in-your-heels Claire Dearing, will also return.)

Another significant allusion to dinosaur militarization from JW includes: Dr. Henry Wu (B.D. Wong) and his presence in the film. He initially has an existential sort of debate with Hoskins, but ultimately flees the island with embryos. Hence, the sequel can now take shape. Colin Trevorrow, who will be at the helm of Star Wars: Episode IX, and who directed JW, is returning to the “dinosaur franchise” to co-write the screenplay for JW2.