Last week, we introduced five films already getting Oscar buzz, but that was only the tip of the iceberg. This week, we have five additional films that are likely to get lots of attention as the fall gets closer and the march towards Oscar nominations accelerates.

The five films this week are about as different as can be. There’s everything from a film based on a play, to a film based on a crumbling shuttle in space — the latter of which is easily one of the most intriguing films slated to come out over the next several months.

Come check out what these five films have going for them and what to look out for.

The Sony Pictures (NYSE:SNE) film is set to have a limited release on December 13 before releasing wide on Christmas Day. Given that director David O. Russell is arguably coming off his most successful year to date as a filmmaker, both financially and critically, the upcoming American Hustle looks destined to have all eyes on it when the Oscars come around.

Along with the reuniting of director Russell and Jennifer Lawrence, fresh off her first Oscar for Silver Linings Playbook, the film will also give us a physically transformed Christian Bale, who is nearly unrecognizable at times in the stellar trailer — which, by the way, has been getting lots of buzz from movie-fans.

Upcoming Sony action-thriller Captain Phillips is coming to us from English director Paul Greengrass — the filmmaker behind The Bourne Supremacy, The Bourne Ultimatum, and United 93. The film tells the true story of Captain Richard Phillips, who was taken hostage by Somali pirates during the Maersk Alabama hijacking in 2009. The screenplay is written by Billy Ray and is based on the book A Captain’s Duty: Somali Pirates, Navy SEALs, and Dangerous Days at Sea, which is written by the titular Richard Phillips and Stephan Talty.

Tom Hanks plays Captain Phillips in the film, which is sure to garner a lot of attention as its release gets closer. The trailer seems to reveal a plot that blurs the lines between captor and captive, telling a story about the complex nature of globalization, while wrapping the story in Greengrass’ trademark style of action and suspense.

The film appears to have both action and brains, which can be a perfect combination when it comes to the Oscars. And don’t forget that Greengrass has a nearly spotless record when it comes to critical acclaim. Captain Phillips is definitely a film to keep your eye on.

Some readers questioned why Fruitvale Station was missing from last week’s list, but here it is this week. The only film on this last that has already been released, Fruitvale Station is a fictional film based on the true story of Oscar Grant — a 22-year-old from Oakland who was shot and killed by BART police officer Johannes Mehserle at the Fruitvale BART Station in Oakland, California. The event led to widespread protests, several of which turned violent.

The Weinstein Co. distributed Fruitvale Station with stars Michael B. Jordan (Chronicle, Friday Night Lights, The Wire) in the role of Oscar Grant, along with actors Octavia Spencer and Melonie Diaz. Both Jordan and directing newcomer Ryan Coogler, who is only 26-years-old and also the writer of the film, have gotten high praise for the Oakland-based drama which might be this year’s Beasts of the Southern Wild — the 2012 low-budget indie film that took the industry by storm, and ended up being nominated for Best Picture.

Fruitvale Station has had nearly unanimous praise — the film is currently sitting at 94 percent “Fresh” on Rotten Tomatoes. Kenneth Turan of the Los Angeles Times wrote, “Made with assurance and deep emotion, ‘Fruitvale Station’ is more than a remarkable directing debut for 26-year-old Ryan Coogler. It’s an outstanding film by any standard,” awarding the film a 5 out of 5. And Todd McCarthy of The Hollywood Reporter said, “A shrewd script and career-launching performances drive a tragic modern story that carries heavy social weight.”

August: Osage County appears to be a film that has Oscar written all over it. Based on Tracy Letts’ play of the same name, August: Osage County is a dark comedy revolving around the patriarch of a Midwest family who goes missing and the crumbling and dysfunctional family left in the aftermath of his disappearance. Letts’ play was the recipient of the 2008 Pulitzer Prize for Drama and has won a slew of awards, including the 2008 Tony Award for Best Play.

The only thing that could seemingly derail August: Osage County would be if the film were not able to translate well from its original format — with plays often written with smaller use of space, film versions of plays often fail to take full advantage of the added benefits that cameras produce.

The exception, of course, is 2008′s play-based film Doubt, also starring Streep, which went on to be nominated for four Academy Awards including Best Actress, Best Supporting Actress, and Best Adapted Screenplay.

Warner Bros.’ (NYSE:TWX) Gravity might be the most interesting film generating lots of early Oscar buzz. Directed by Alfonso Cuarón (Children of Men, Y Tu Mamá También, Harry Potter and the Prisoner of Azkaban), this sci-fi thriller stars George Clooney and Sandra Bullock as surviving astronauts on a damaged space shuttle, forced to rely on each other to survive after debris from a satellite crashes into it.

The buzz surrounding Gravity seems to resemble that of James Cameron’s 2009 sci-fi film Avatar – specifically, lots of onlookers are thinking that the film’s ambitiousness, highly sophisticated special effects, and cinematography might get a lot of people talking about it. Reactions from the first test-screening back in May had viewers, at the worst, saying it was an interesting film, but not ground-breaking; others believed the film represents an even bigger step forward than Avatar seemed like in 2009. If that’s the case, Oscars might be on the horizon.

Gravity would definitely appear to be one of the most captivating films coming out in the fall. And if it delivers, which Cuarón has been known to make films do, the movie could be looking at significant Oscar nominations outside of the nearly guaranteed categories like Special Effects, Sound, or Cinematography. 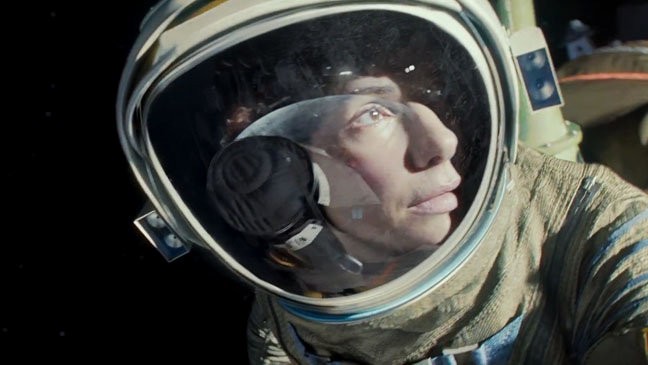