Rough Gigs: 5 of the Worst Movies for the Cast and Crew

The moviemaking process can often be a an arduous one. Cast, crew, and sometimes producers can be stuck on location for days at a time, in all manner of insane conditions. Directors often have crazy demands of their actors, merciless shooting schedules can have crew members standing out in the freezing cold or blazing hot for longer than any human should, and sometimes broken technology will keep a film in production far past what its budget allows.

There are some stories about the production process though that have gone down in history as some of the most hellish in existence. Whenever you put massive budgets, big egos, and a multi-billion dollar industry in the same room, sparks are bound to fly. Sometimes literally. Apocalypse Now was a movie that ended up being so difficult and insane to shoot that it was given its own accompanying story, Heart of Darkness, to lay out the living hell that was shooting on site in East Asia with Francis Ford Coppola. At one point, co-producer Gary Frederickson found out that rather than using life-sized models, they were using real, actual dead bodies stolen from graves in Vietnam by a local who made a living providing cadavers to medical students in the region.

Meanwhile, the production was providing co-star Dennis Hopper with enough cocaine to keep him wired for weeks, while Martin Sheen outright told his friends, “I don’t know if I’m going to live through this.” And all this? It doesn’t even scratch the surface of the pure insanity that was the making of Apocalypse Now either. (All info was culled from The Independent over here.)

2. Werner Herzog made a team of engineers drag a 320-ton steamship up a mountain for Fitzcarraldo Fitzcarraldo is yet another movie accompanied by its own official story, entitled Burdens of Dreams. For the production of Werner Herzog’s flick about a man pulling a ship over a mountain, virtually every step was marred by disaster. The crew set up camp in Peru, only to have it burnt to the ground by natives displeased with their land being intruded upon. The original lead actor Jason Robards dropped out of production after contracting an intestinal virus, a plane crash killed several crew members, and at one point a crew member asked for Herzog’s permission to kill Robards’s replacement Klaus Kinski, according to Whistling Shade.

And, of course, there was the legendary ship. Weighing in at 320 tons was the antique steamship Herzog purchased from Colombia. Rather than use special effects to depict it, he had engineers haul the ship over a small mountain. Many of the engineers quit over fearing for their lives. The German director has always been known for being meticulous and committed to the craft, but this may very well have been his most extreme undertaking ever.

3. On the set of Three Kings, George Clooney got into a physical fight with director David O. Russell David O. Russell has built a reputation as a director who’s notoriously difficult to work with. Never was this more evident than on the set of his Gulf War allegory Three Kings, starring George Clooney. IMDb cites a direct quote from Clooney where he describes the special hell Russell put everyone through on a regular basis. Apparently, the director made a habit of humiliating (and at times even assaulting) crew members over production for the movie: He screamed at a camera-car driver, reduced a script-supervisor to tears, shoved and kicked an extra not performing a stunt properly, and finally came to blows with none other than Clooney himself.

After trying to calm Russell down during one of his particularly more vibrant fits, Clooney found himself in the crosshairs. He describes the scene with Russell yelling obscenities in his face, daring the actor to hit him. The rest of the story only gets crazier from there.

(Russell) started banging me on the head with his head. He goes, ‘Hit me, you pussy. Hit me.’ Then, he got me by the throat and I went nuts. Waldo, my buddy, one of the boys, grabbed me by the waist to get me to let go of him. I had him by the throat. I was going to kill him. Kill him.

4. The mechanical sharks used in Jaws took 14 people to operate and malfunctioned daily

Steven Spielberg’s Jaws is remembered today as one of the greatest monster movies ever made, using nothing but a boat and a giant mechanical shark (lovingly named Bruce by the crew). In reality, there were three different sharks they used thanks to almost daily malfunctions from each one that ran the production $5 million over-budget (run down in The Atlantic here). The sharks made a habit of capsizing and sinking down 35 feet into the water, leaving divers the task of resurfacing them. Other times, they would fall from their platforms and get irrevocably tangled in seaweed. The pneumatic hoses that helped run each shark would routinely fill with saltwater, fracturing the innards with water pressure and corroding the sheeting.

The resulting workaround was Spielberg simply choosing to use all three Bruces as little as possible, a tactic that thematically ended up working well for the movie. Audiences saw less of the shark on screen, and as a result it was scarier each time it appeared.

5. Russian Ark was shot in one, continuous 86-minute take 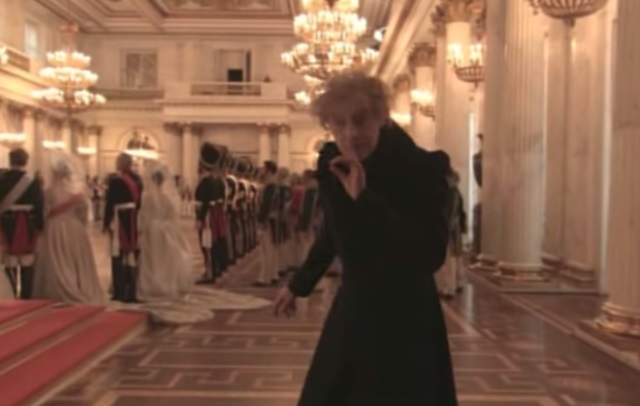 Made as a Russian indie film, Russian Ark took on a huge undertaking for a small budget art house flick: Shooting the entire 86-minute movie in a single, unbroken shot. On location, they used an actual museum that allotted them a 36 hour window to shoot the entire thing, giving them little to no room for mistakes. Imagine undertaking a project that filmed both inside and outside a museum (in -24 degree cold weather). Now imagine having to do this with over 1,800 actors in the cast, a Steadicam operator wearing 77 pounds of equipment, and portable light sets in 36 separate rooms.

Four takes later, they got the final product, as an exhausted director, cast, and crew were finally able to pack up and go home. There’s a 9 minute documentary on YouTube that goes through the making of the movie that we highly recommend watching for more details, but needless to say it was an absolute horror to shoot Russian Ark.