5 of the Best Films About Office Life

Sometimes, we watch movies to escape reality. But for those who toil away their hours at a 9 to 5, sometimes it can be therapeutic to watch our struggles on screen. When films showcase the most ridiculous aspects of corporate life, or make fun of the mundane ways we pass time in our cubicles, it can be therapeutic.

When The Intern hits theaters on September 25, it will be the latest in a long line of films about office life. And it hits on a common theme many office workers have experienced — the divide between seasoned pros and the up-and-coming young professionals. It also deals with the stress of uncertainty about your career or your future. Here are five other great Hollywood films that show what life is like in the American workplace.

This offbeat comedy from Mike Judge is the film by which all other films about work should be measured. Office Space provides blisteringly funny commentary on the most ridiculous parts of corporate life, from mandatory birthday cake to TPS reports. It follows Peter Gibbons (Ron Livingston), an underwhelmed IT programmer who barely tolerates his commute, his bosses, and their endless memos and TPS reports. That is, until he’s hypnotized into not caring at all. What follows is pure comedy magic.

It wasn’t initially a commercial success when it was released in 1999, but it’s since earned cult status. Office Space works on multiple levels. It’s highly effective as a satirical look at corporate culture, because it so closely mirrors so much of what those who work there experience. It’s also side-splittingly funny in its exploration of the lengths people will go to in order to get away from their dead-end day jobs. And it also showcases the genuine bond that cubicle-mates end up forming while commiserating over their mundane plight. 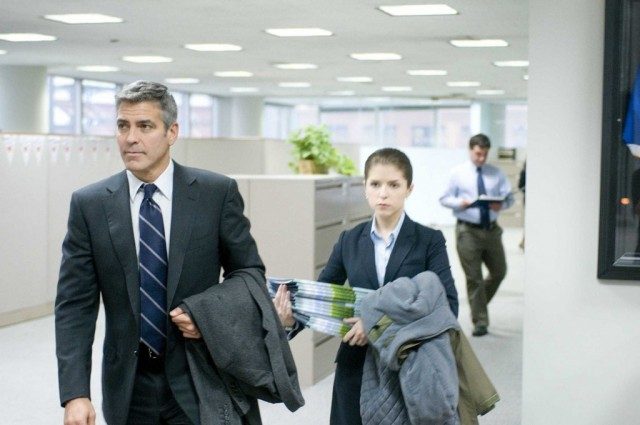 Unfortunately, a big part of working in an office these days is living with the potential that someday you might get fired. Up in the Air features flawless performances from Clooney, Kendrick, and Vera Farmiga, and also marks a career high for director and co-writer Jason Reitman. The film follows two people who make their living by letting people go. As Ryan Bingham (George Clooney) and his young protege Natalie Keener (Anna Kendrick) criss-cross the country, visiting companies and helping companies downsize, they get a glimpse at the reality of corporate life without ever having to fully live in it. What makes Up in the Air such a unique and enjoyable film is that this outsider’s perspective within the inside of office culture allows for multiple powerful revelations. One is that, more or less, all offices and companies seem to operate similarly. The other is that despite this seeming uniformity, each and every office is made up of real humans, with real lives, and real hopes for their future. 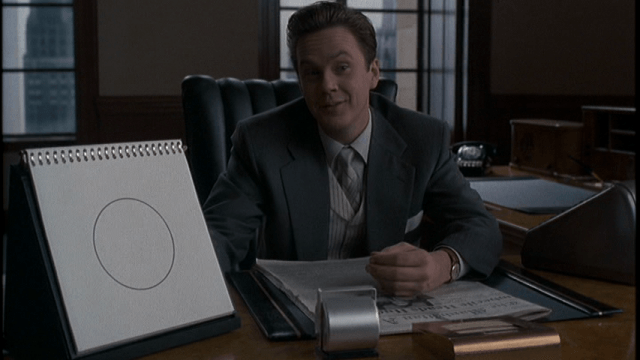 We all like to believe that those hired to lead us are equipped for the job. The Hudsucker Proxy explores what would happen if someone with no skills or qualifications was given ultimate power in a corporation. This comedy from the Coen Brothers has been criticized by some for being emotionless and cold. But given the culture that protagonist Norville Barnes (Tim Robbins) exists within, that tone is actually fitting. The Hudsucker Proxy takes you through every facet of office life, from the mailroom to the boardroom. And it serves, in some way, as an homage to the slick-talking business culture of the 1930s, ultimately showing that while we continue to innovate and grow, some things never change. 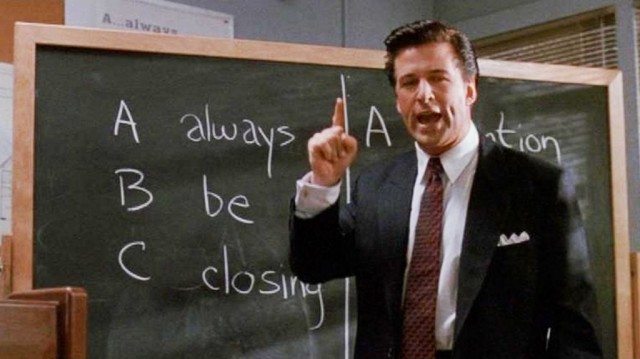 Office Space showed us that coworkers can be an asset when it comes to keeping your sanity on the job. Glengarry Glen Ross argues the exact opposite, showing what happens when colleagues are pitted against each other in competition. The drama, adapted from the play of the same name, follows four successful real estate salesmen who find themselves at odds with their broker and each other as they rush to complete sales or risk being fired. It features an all-star cast, including Al Pacino, Alec Baldwin, Jack Lemmon, and Kevin Spacey. And due to the caliber of actors on screen and the high stakes their characters are facing, it features some of the most intense sequences within an office setting in any Hollywood film. It also serves as a reminder of the darker side of the business world — one that can afford great successes, but also ruin livelihoods.

5. All the President’s Men 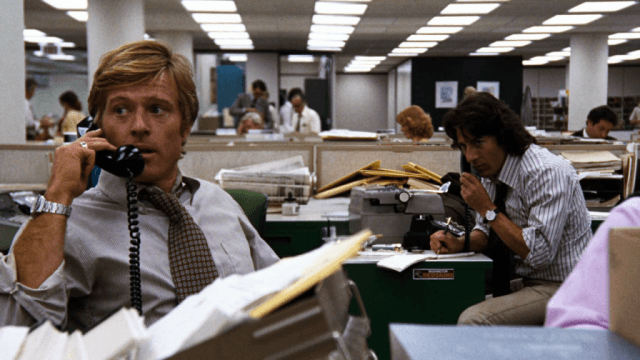 This may be a bit of a controversial pick, because All The President’s Men isn’t traditionally considered a film about office life. This political thriller, based on the true story of Bob Woodward (Robert Redford) and Carl Bernstein’s (Dustin Hoffman) dogged journalistic pursuit of the Watergate scandal, definitely contains some game-changing moments within an office setting. And it also provides a rare glimpse into an office setting that’s much harder to find these days — the newsroom. Much of the film takes place within The Washington Post’s offices, as the two young and hungry reporters try to track down sources and gain the support of their editor Ben Bradlee (Jason Robards). The work they do together, both in the office and while they’re tracking down their sources, ended up changing the course of American history. And director Alan J. Pakula captures their dedication and the intensity of their investigation, creating one of the most exciting films of the 20th century. But All the President’s Men isn’t just an amazing film.